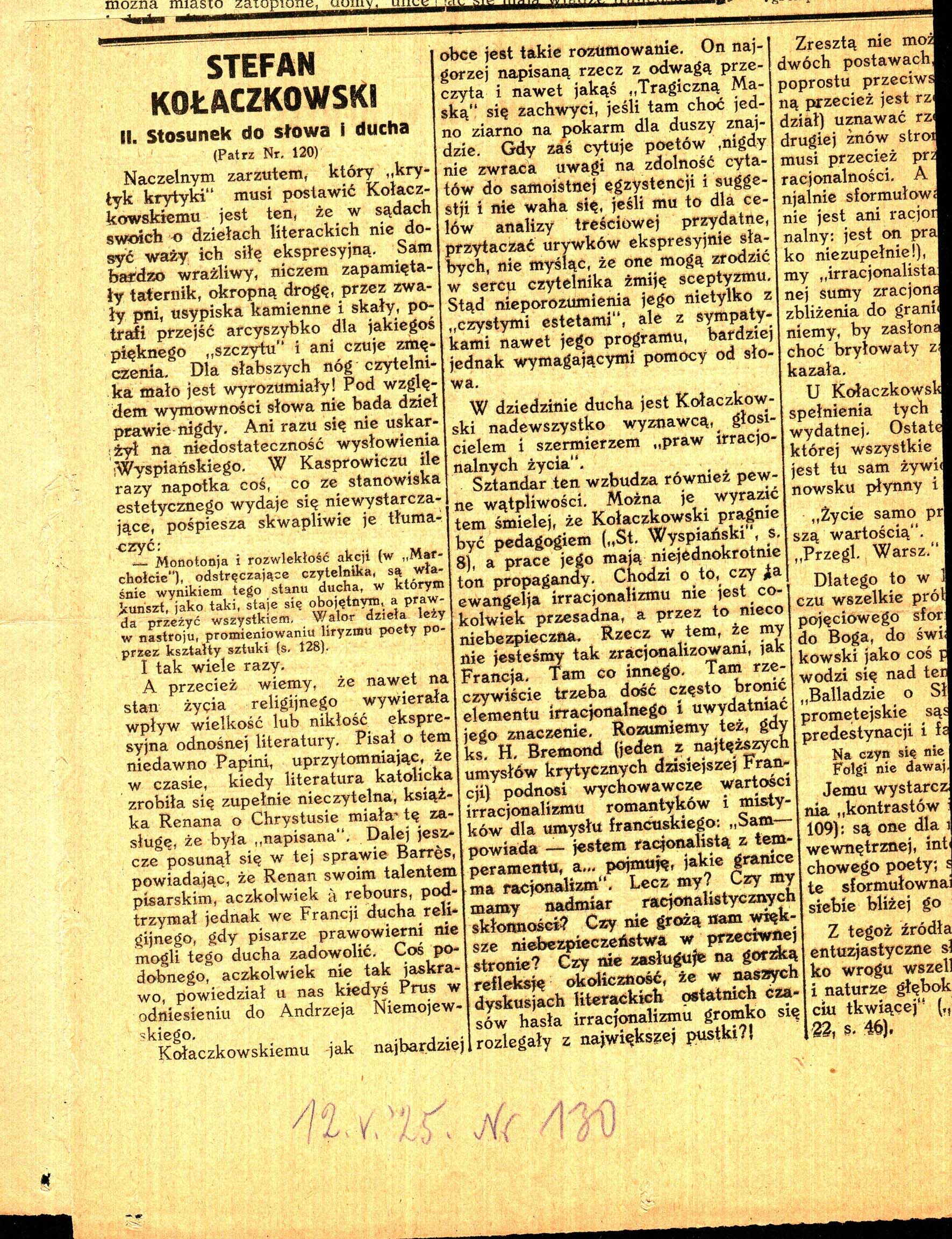 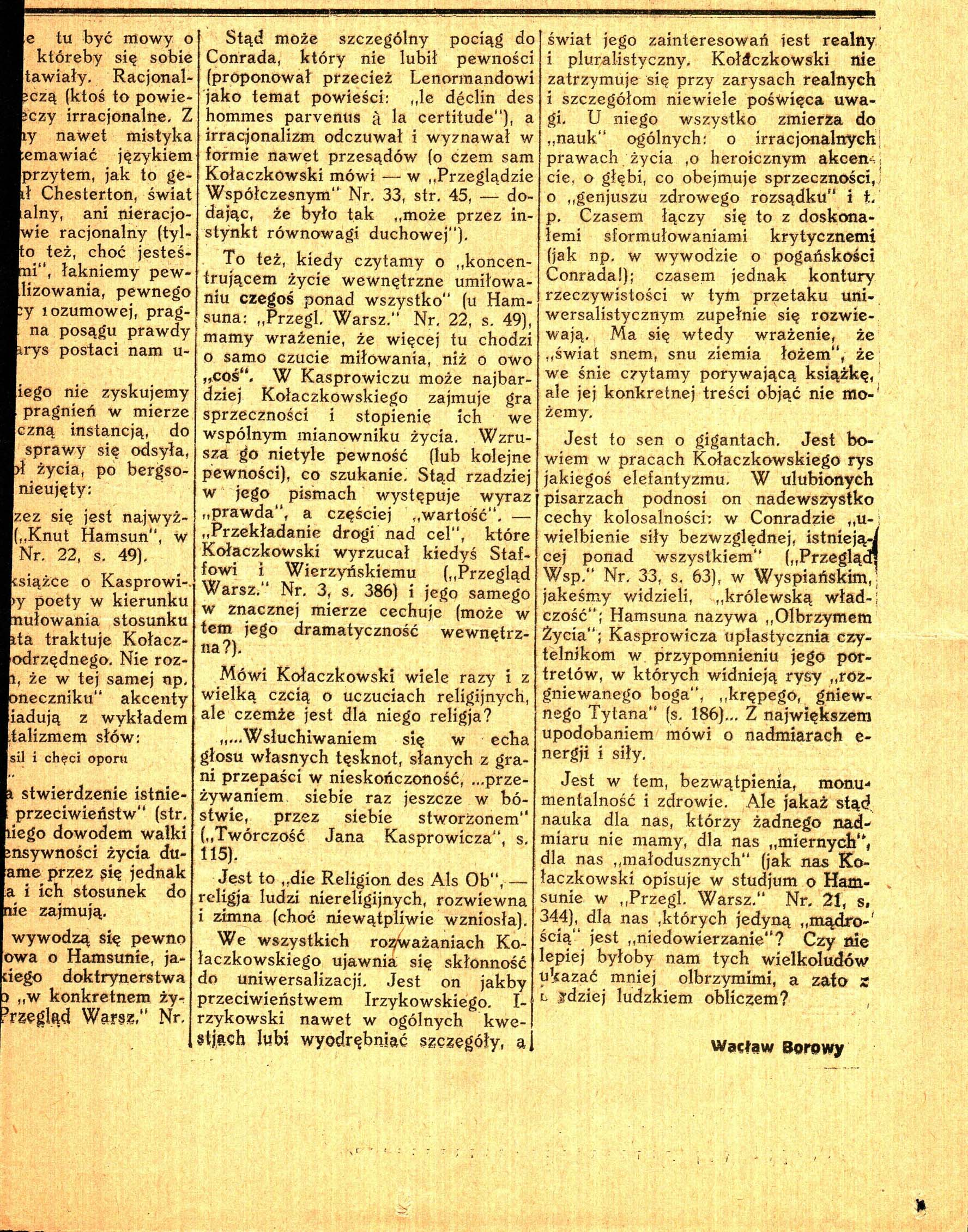 STEFAN
KOŁACZKOWSKI
II. Attitude to word and spirit
(See No. 120)

The chief accusation one has to make against Kołaczkowski as a “critic of criticism” is that in his judgments about literary works he does not quite appreciate their expressive strength. Himself very sensitive, like a seasoned mountain climber, he is able to quickly concur the terrible path, heaps of stumps, stone and rocks, for some beautiful “peak” an not feel any fatigue. He is not very forgiving for the reader’s weaker legs! He almost never examines the works in terms of eloquence. He has never once complained about the insufficiency of Wyspiański’s words. In Kasprowicz, whenever he encounters something that seems insufficient from the aesthetic point of view he hurries to explain it:
n         – Monotony and the dragged-out action (in ‘Marchołt’) repelling the reader are a result of this state of mind in which artistry, as such, becomes unimportant and the truth prevails. The value of the work lies in the mood, the radiation of the poet’s lyricism through the shapes of the art (p. 128).
n        And so many times over.

And yet we know that even the state of religious life was influenced by the greatness or insignificance of relevant literature. Papini wrote about it recently, pointing out that at a time when Catholic literature had become completely illegible, Renan’s book about Christ had the merit of being “written”. And Barrès went even further, saying that Renan’s talent, however a rebours, maintained the religious spirit in France, when orthodox writers failed to satisfy it. Something similar, although not as vividly, was once said by Prus with regards to Andrzej Niemojewski.

n        Kołaczkowski is completely unfamiliar with such reasoning. He will courageously read the most poorly-written thing and admire even some “Tragic Mask” if there is but one grain of soul food to find there. When he quotes poets, in turn, he never pays attention to the capacity of spontaneous existence and suggestion quotes posess and does not hesitate, if it is useful for content analysis purposes, to quote fragments of expressive weaknesses, without thinking that they can give birth to biting skepticism in a reader. Hence the disagreements, not only with “pure esthetes”, but even with more demanding, in terms of word, sympathizers of his program.

n        In the area of the spirit, Kołaczkowski is above all a follower, a preacher and a swordsman of the ” irrational laws of life”.

n        This banner also raises some doubts. They can be expressed all the more boldly since Kołaczkowski wants to be an educator (“St. Wyspiański,” p. 8) and his works often have an undertone of propaganda. The question is whether this gospel of irrationalism is not somewhat exaggerated, and therefore somewhat dangerous. The thing is that we are not as rationalized as France is. It is different there. One indeed has to defend the irrational element quite often and emphasize its meaning. It is also understandable when Fr. H. Bremond (one of the most intense critical minds of today’s France) raises the educational value of irrationalism of romantics and mystics for the French mind: “I myself,” he says, “am a rationalist by nature, and … understands what limits rationalism has.” But us? Do we have an excess of rationalistic tendencies? Are there not more dangers on the opposite side for us? Does the fact that in our literary discussions in recent times the slogans of irrationalism have been thundering from the greatest emptiness not deserve a bitter reflection!?

n        Besides, there can be no talk of two attitudes that would simply oppose each other. The rational thing is (a someone said once) to recognize irrational things. On the other hand, even the mystic must speak the language of rationality. And, as Chesterton formulated it formally, the world is neither rational nor irrational: it is almost rational (but not completely!). Hence although we are “irrationalists”, we crave a certain amount of rationalization, a certain proximity to the rational boundary, we desire for the curtain on the statue of truth, to show us even but its outline.

n        In Kołaczkowski’s case, we do not gain the fulfillment of these desires to a significant degree. The ultimate instance which all matters are referred back to is here the very element of life, liquid and unresolved in a truly Bergsonian manner:
n        “Life in and of itself is the highest value.” (“Knut Hamsum”, in “Wars. Rev.” No. 22, p. 49).
n        Therefore, in the book on Kasprowicz, all attempts by the poet to conceptualize the attitude towards God and to the world are treated by Kołaczkowski as something secondary. He does not dwell on the fact that in the same, for example, “Ballad and Sunflower”, Promethean accents exist parallel to a lesson on predestination and fatalism present in the words:

It is enough for him to state the existence of “contrasts and opposites” (p. 109): for him they are evidence of an inner struggle, the intensity of the poet’s spiritual life; and their relation towards one another does not interest him.

This is probably the source of his enthusiastic words about Hamsun, as an enemy of all doctrinaire and nature deeply “in the concrete life inherent” (“Wars. Rev.” No. 22, p. 46).

n        Hence perhaps a certain attraction for Conrad, who did not like certainty (after all, he suggested to Lenormand: “le déclin des hommes parvenus à la certitude” as a subject for a novel), and experienced and professed irrationalism to the point of superstition (of which Kołaczkowski himself talks – in the Contemporary Review No. 33, p. 45 – adding that it might have been because of instinct of spiritual balance.”) Hence when we read about love for something above everything else concentrating the inner life (in Hamsun “Wars. Rev.” No. 22, p. 49), we get the impression that it is more about the feeling of love than about this “something.” In Kasprowicz, Kołaczkowski most concerned with with the contradictions and their meltdown into a common denominator of life. He is moved not by a certainty (or subsequent certainties), but by the search. Hence, we encounter the word “truth” in his writings less often than “value”. – “The journey over the goal” attitude which Kołaczkowski once used to reproach Staff and Wierzyński for (“Wars. Rev.” No. 3, p. 386) is very much on of his chief characteristics (maybe that is what makes up his inner drama?)

n        Kolaczkowski talks repeatedly and with great reverence about religious feelings, but what is religion for him?
n        “… Listening to the echoes of the voice of one’s own longing, heard from the ridge of the abyss into infinity, … experiencing oneself again in the deity, created by oneself” (“The Works of Jan Kasprowicz”, p. 115).
n        It is “die Religion des Als Ob” – the religion of non-religious people, bleak and cold (though undoubtedly lofty).

n        In all of Kolaczkowski’s reflections there is a tendency to universalize. It is like the opposite of Irzykowski. Even in general matters, Irzykowski likes to point to details, and the world of his interests is real and pluralistic. Kołaczkowski does not stop with real outlines and he does not pay much attention to detail. With him everything moves in the direction of general “sciences”: on the irrational laws of life, on the heroic accent, on depth, on what constitutes contradictions, on the “genius of common sense” etc. Sometimes it is supplemented by the perfect critical wording (as in the argument about Conrad being a heathen!); sometimes, however, the contours of reality are completely dispelled in this universal molding. Then you get the impression that “the world is a dream, on the bed of earth”, that in this dream we are reading a thrilling book, but we cannot grasp its specific content.

n        It is a dream about giants. For there is a feature of some sort of elefantism in Kołaczkowski’s work. In his favorite writers, he raises above all the features of enormousness: In Conrad, “the worship of an absolute force that exists above all else” (“Cont. Rev.” No. 33, p. 63), in Wyspiański, as we have mentioned, the “royal imperialism,” Hamsun is called the ,,Giant of Life “; Kasprowicz is described to his readers by means of recalling his portraits in which the features of an “angry god”, “stocky, angry Titan” are present (p. 186) … Speaking about excess energy and strength seems to give him genuine pleasure.

n        There is, without a doubt, monumentality and health in it. But of what use is that to us, who have no excess, for us, “the mediocre “, for us “the faint of heart” (as Kołaczkowski describes us in the study on Hamsun in “Wars. Rev.” No. 21, p. 344), for us whose only “wisdom” is “disbelief”? Wouldn’t it be better to show us these giants to be smaller, but more human?