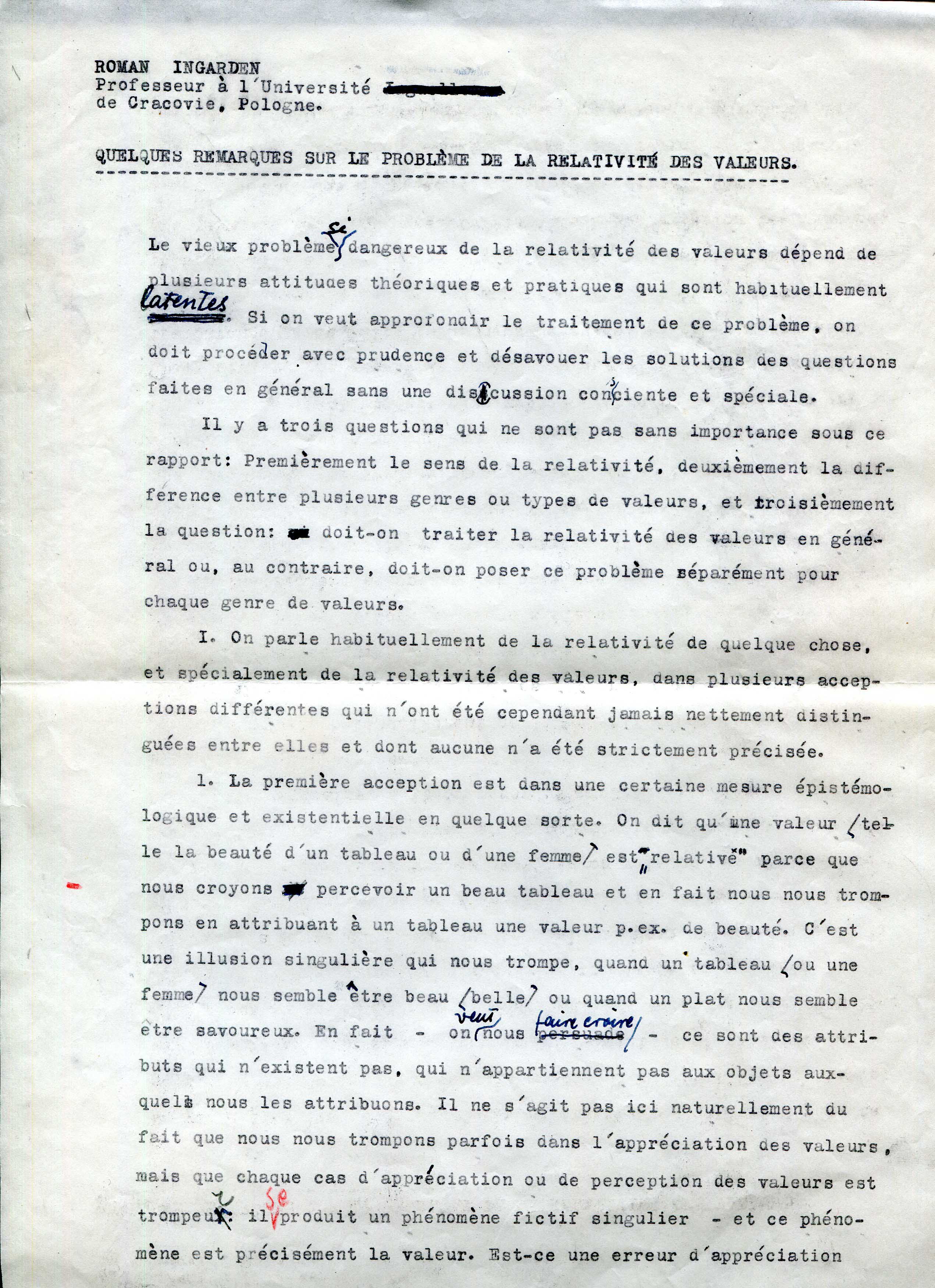 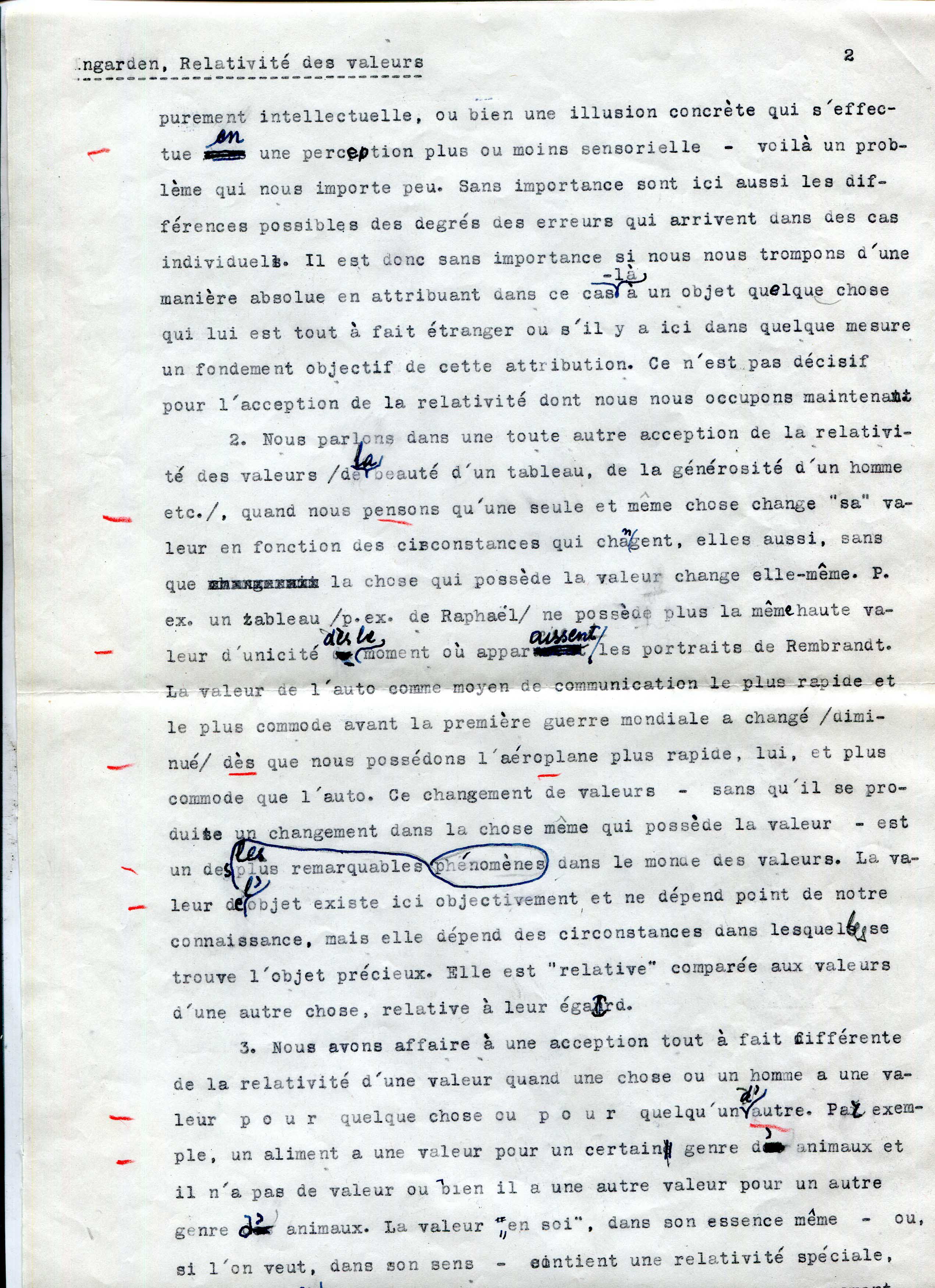 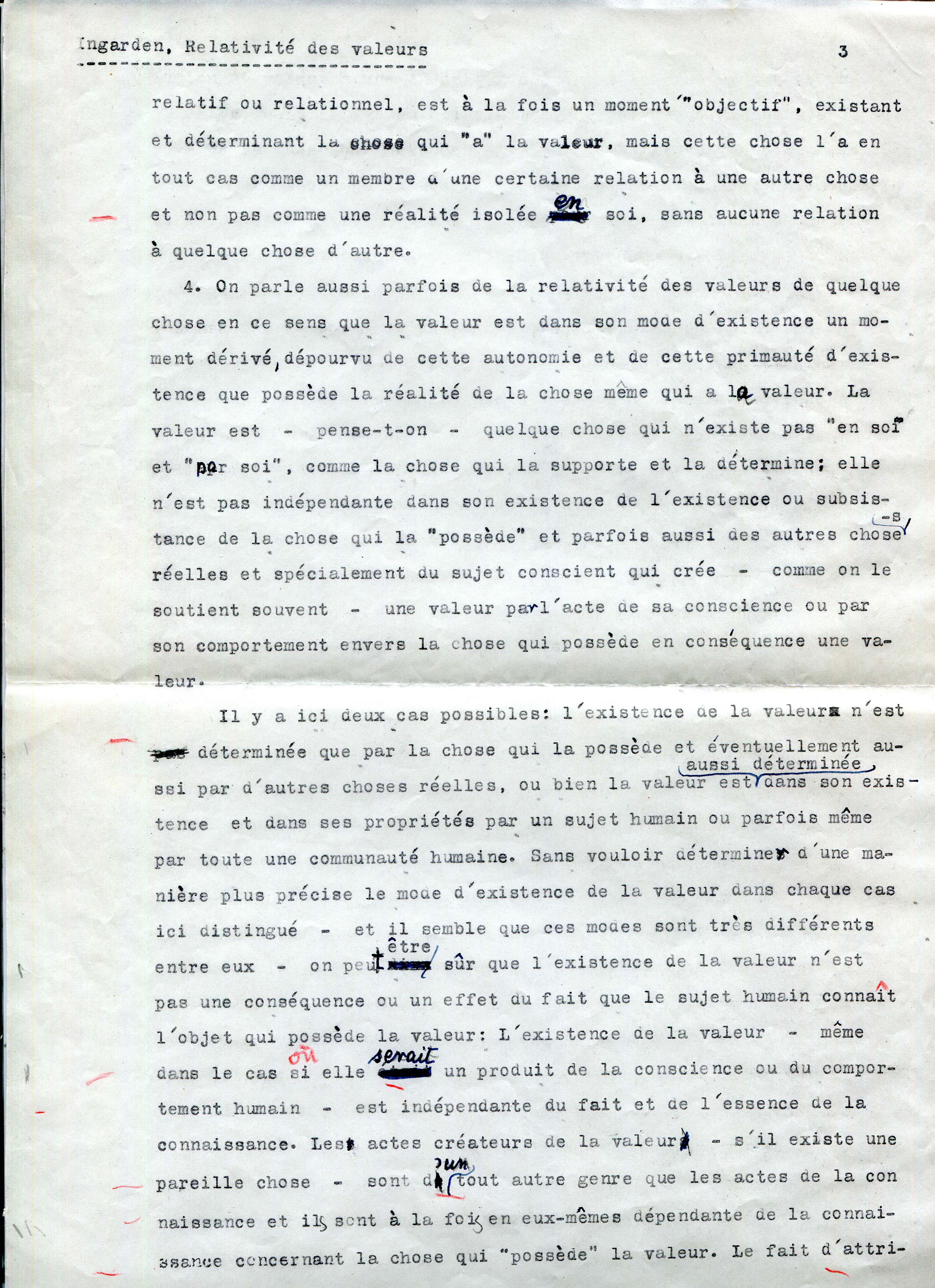 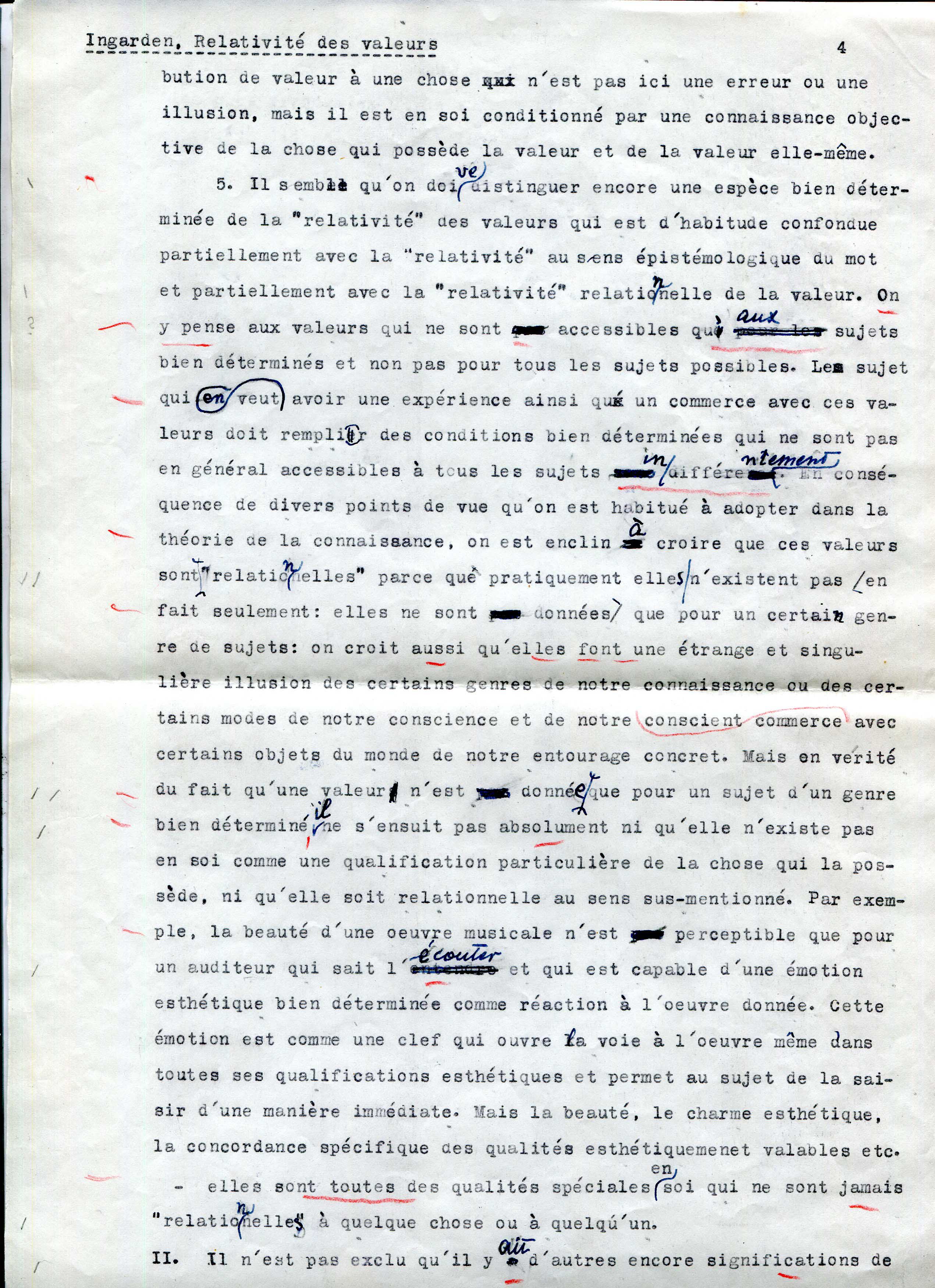 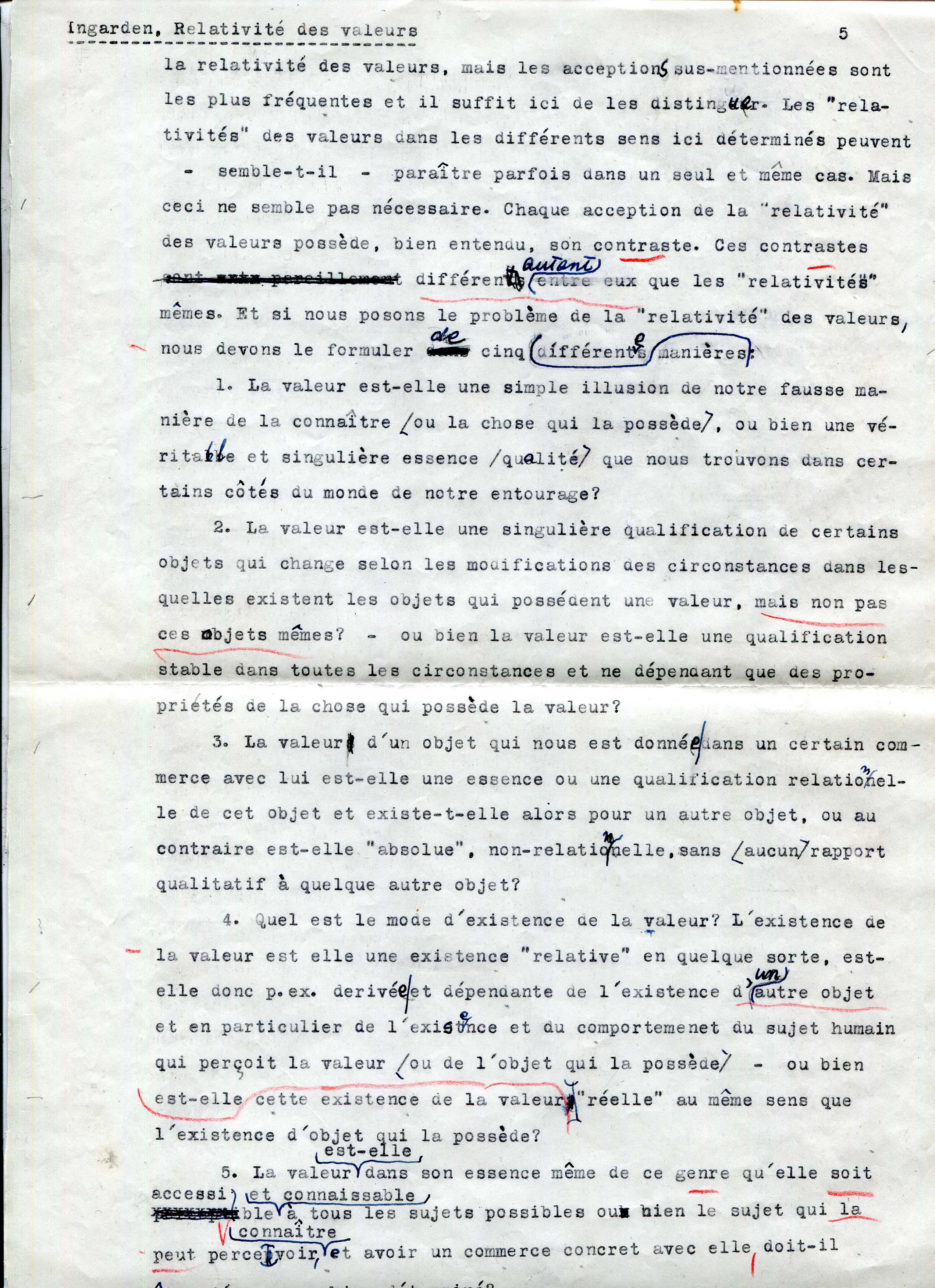 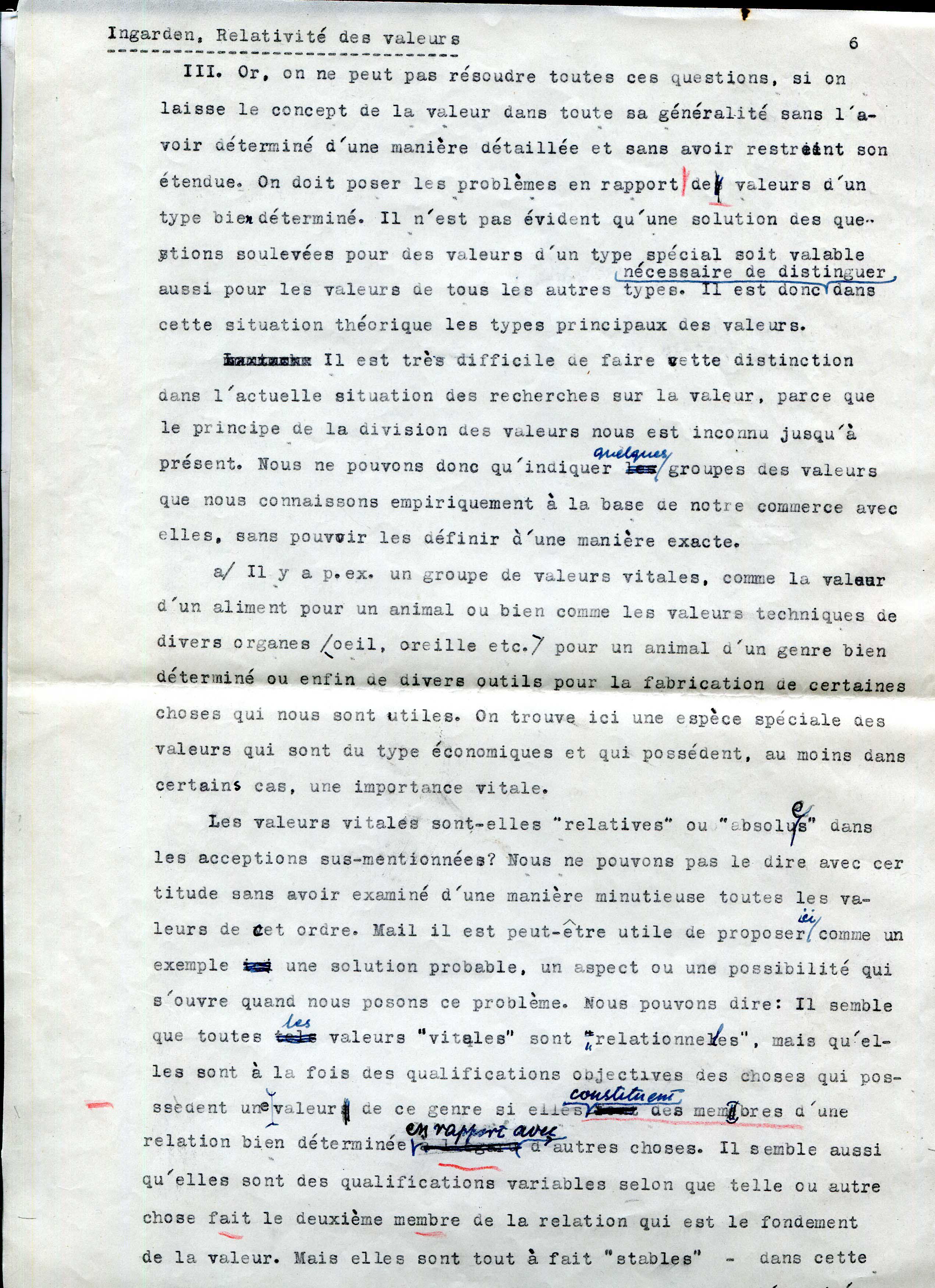 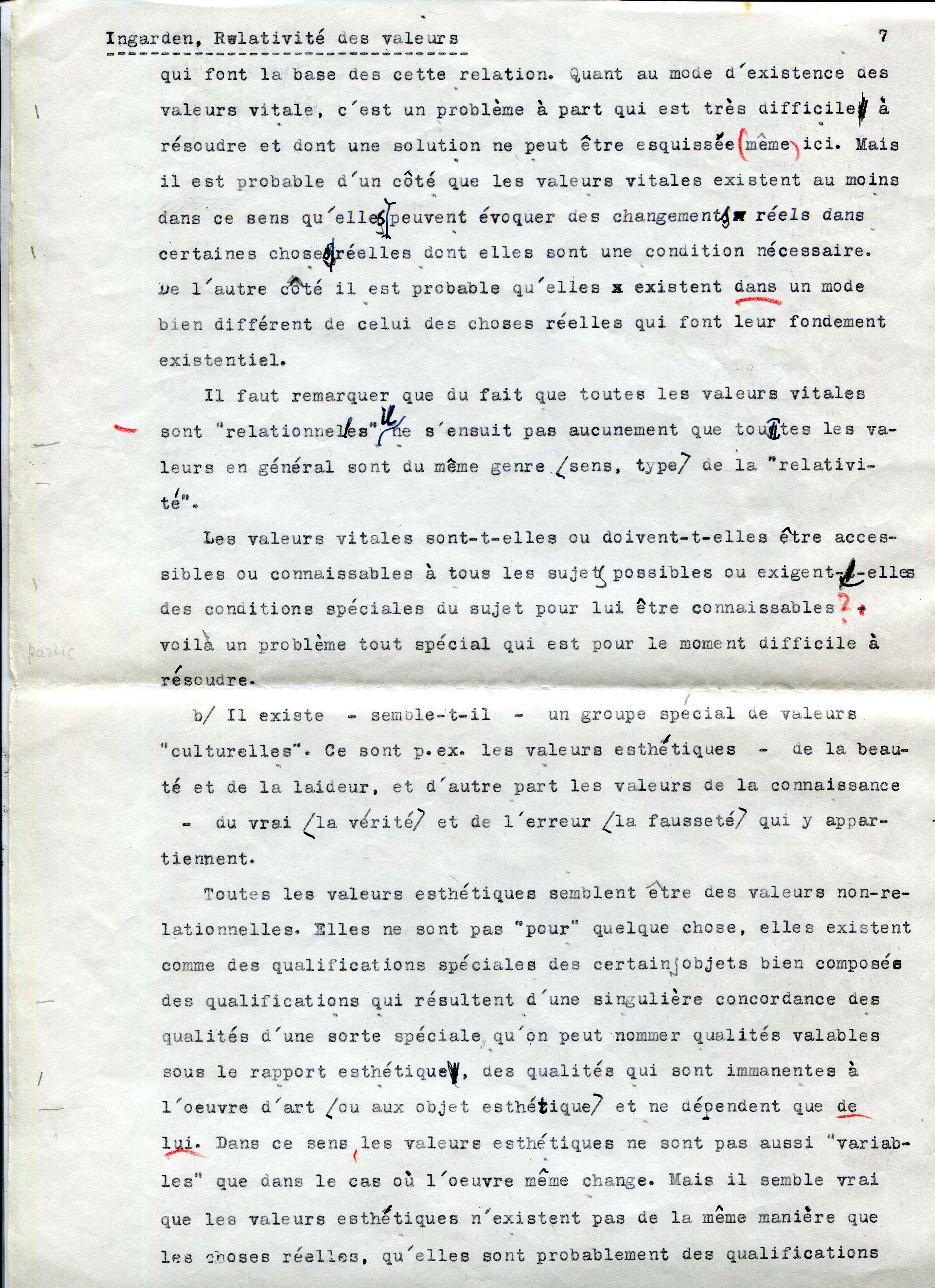 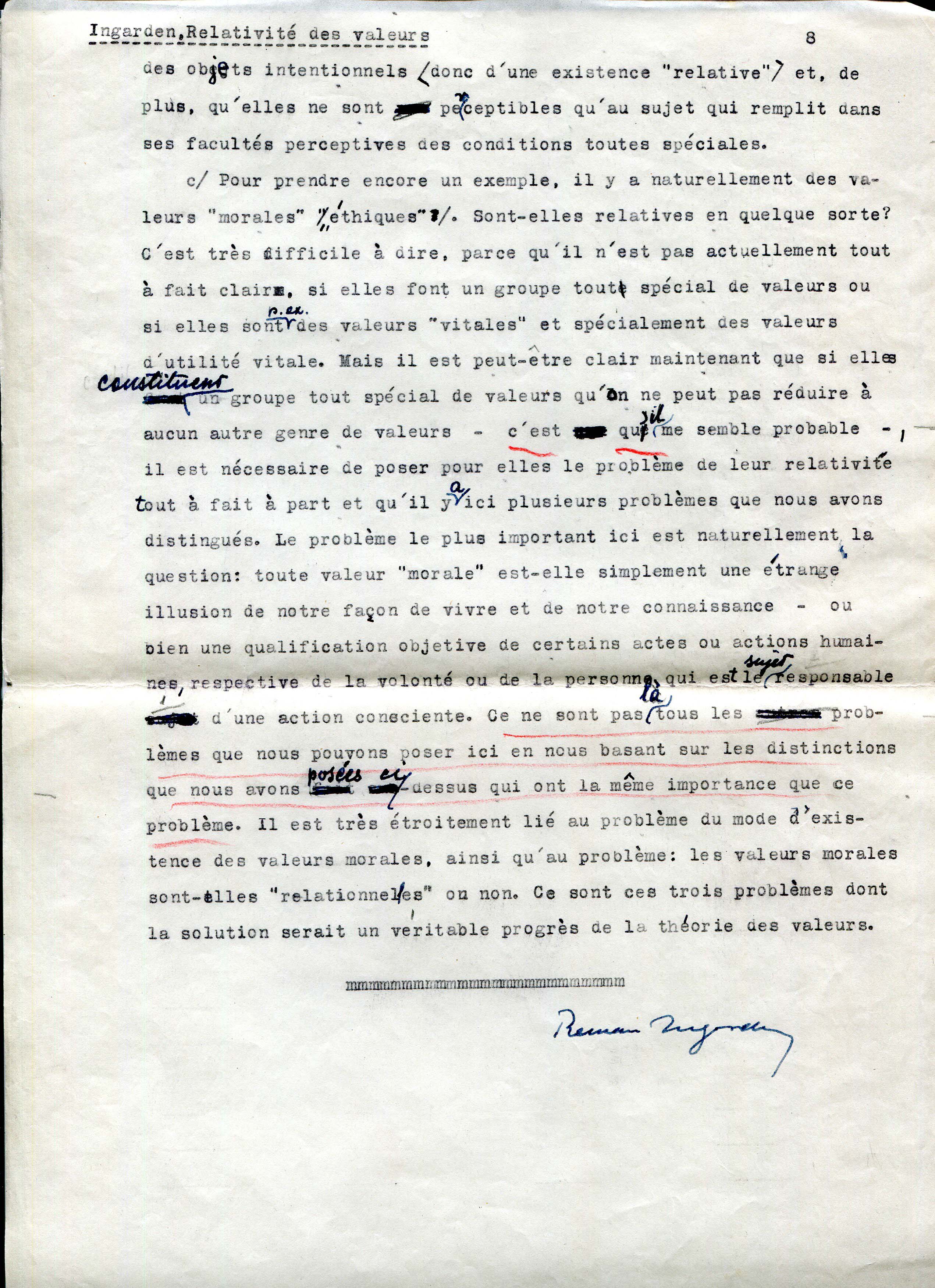 Professor of the University

REMARKS CONCERNING THE RELATIVITY OF VALUES

The old and dangerous problem of relativity of values depends on several theoretical and practical attitudes, which are usually hidden. In our attempts at a deeper discussion of this problem, we should proceed with caution and reveal solutions to issues posed in a general manner, without a conscious and specific discussion.

There are three significant concerns in this regard: Firstly, the meaning of relativity, secondly, the difference between particular varieties, or types of values, and thirdly, the question whether we should consider the issue of relativity of value generally or, on the contrary, address this problem separately for each type of value.

Whether it is a purely intellectual error of recognition or a specific illusion that takes place in a more or less sensory perception – this is a problem of no significance to us. Neither are any possible differences in the degree of the errors that occur in individual cases. It does not matter, therefore, if we deceive ourselves in an absolute way assigning the object in this case with something that is completely foreign to it, or if some objective basis for this attribution really exists. This is in no way critical for the meaning of relativity currently under our consideration.

This change in value – taking place regardless of no changes occurring in the object that possesses value – is one of the most unusual phenomena in the world of values. The value of an object exists objectively here and does not depend on our knowledge. Instead, it depends on the circumstances in which the valuable item is found. It is “relative” compared to the value of other objects, relative to them.

… relative or relational, it is both an “objective”, existing and defining moment for an object that “possesses value”, but for another object and not as an isolated reality in and of itself – it is without any relation to anything else.

Foregoing attempts at a more precise definition of the world of existence of values in each case discussed here – and it seems that the methods differ significantly from each other – we can be sure that the existence of value is not a consequence or effect of the fact that a human subject cognizes an object that has value: the existence value – even if it was a product of human consciousness or human behavior – is independent of the existence and essence of knowledge. Acts that create values – if anything else like them exists – are of a different nature than cognitive acts and are in their very essence dependent on knowledge regarding the object that “possesses” value. The fact of assigning value to an object is not a mistake or an illusion then, but it is contingent on objective knowledge of the object that has value and the value itself.

III. We cannot solve all these issues if we leave the concept of value at a general level without defining it in more detail, without limiting its scope. One has to ask about particular types of values. It is not a given that answer to questions about value of a specific type will also be valid for values of all other types. Therefore, it is necessary in this theoretical situation to distinguish some main types of values.

a/ There is, for example, a group of important values, such as the value of food for an animal or the value of performance of various organs /eyes, ears, etc./ for a specific animal of a certain type or, finally, various tools for producing certain things which are useful to us. We encounter a specific type of value here, which is of economic nature and which, at least in some cases, has particular significance.

Are vital values “relative” or “absolute” in the aforementioned acceptations? We cannot say so with certainty without carefully examining all values in this category. However, it may be useful to suggest here as an example a probable solution, aspect or possibility that open up when we pose this problem. We may say: it seems that all “life” values are “relational”, but that they are also objective qualifications of objects possessing this type of value if they are a party in a particular relationship in relation to other objects. The qualifications also seem to be variable depending on whether one or the other object makes the other party in the relationship become the foundation of the value. But they are quite “stable” – including …

… which form the basis of this relationship. As for the way vital values exist, it is a specific problem that is very difficult to solve and its resolution cannot be outlined here (even) at this point. But on the one hand, it is likely that vital values exist at least in the sense that they can cause real changes in certain real objects for which they are a necessary condition. On the other hand, it is likely that they exist in a manner very different from the existence of real things that constitute their existential foundations.

Since all significant values are “relational”, it should be noted that it does not mean that all values in general can be attributed the same kind /meaning, type/ of “relativity”.

Are or should vital values be available or cognizable for all possible subjects, or are there specific conditions a subject must fulfill for them to be cognizable? The nature of this problem is very specific and it would be difficult to solve at this point.

b / There seems to exist a special group of “cultural” values. These are, for example, aesthetic values – beauty and ugliness, and the values of knowledge – reality /truth/ and error /falsehood/.

All aesthetic values appear to be non-relational values. They are not something “for” something else, they exist as special qualifications of certain objects consisting of qualities which result from a single compatibility of features of a specific type, which we can call features significant in aesthetic relation, features which are immanent in works of art /or aesthetic objects/ and only dependent on them. In this sense, aesthetic values are not as “variable” as in the cases where the work itself changes. But it seems true that aesthetic values do not exist in the same way real objects do, that they are probably qualifications of intentional objects /and thus “relative” existence/, and that they are only perceptible to a subject whose perceptual abilities fulfill special conditions.

c/ To give one more example, “moral” /ethical/ values, of course, exist. Are they somehow relative? It is difficult to say, as it is not quite clear at this point, assuming they form a special group of values or are, for example, “fundamental” values, and in particular – values of basic utility. But it can already be said that if they constitute a special group of values that cannot be reduced to any other type of value – which seems probable to me – their relativity should be considered completely separately, we would, however, encounter a number of difficulties we have already pointed out before.

The most important problem here is, of course, the following question: is any “moral” value simply a strange illusion of our knowledge – or an objective qualification of certain human deeds or actions, respectively of the will or the person who is the subject responsible for conscious action? This does not exhaust the issues we could reflect on based on the distinctions outlined above, some of similar weight and significance as our central problem. They include the issue of the manner of existence of moral values, and the question whether moral values are “relational” [or] not. These are the three main issues the solution of which would make for a true advancement in value theory.