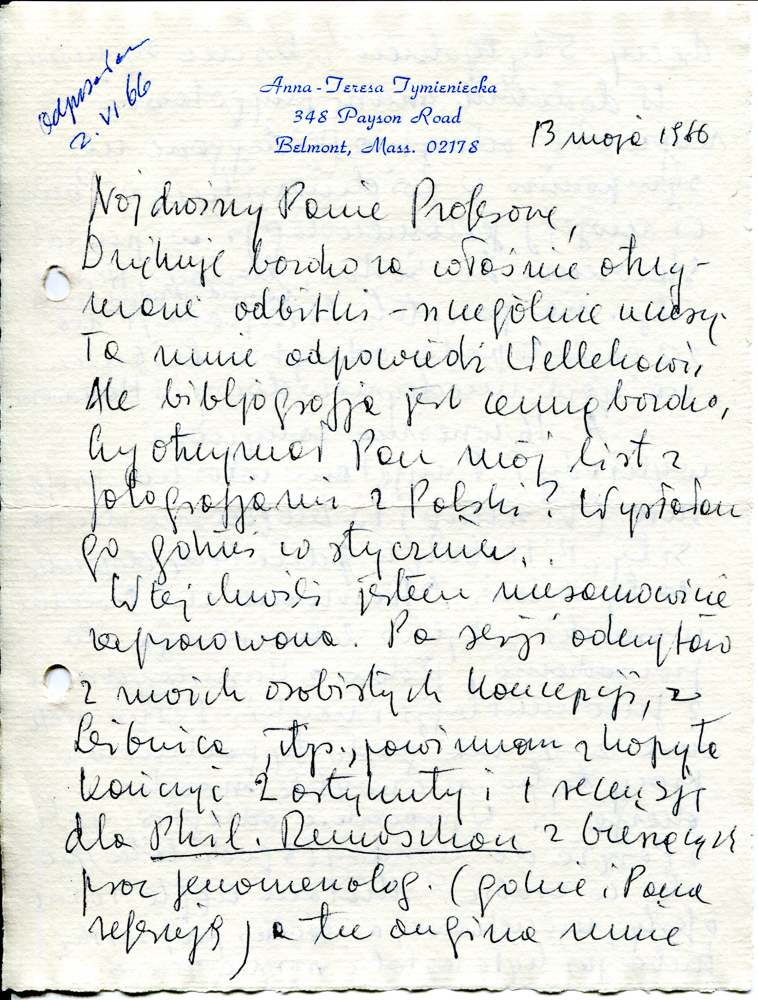 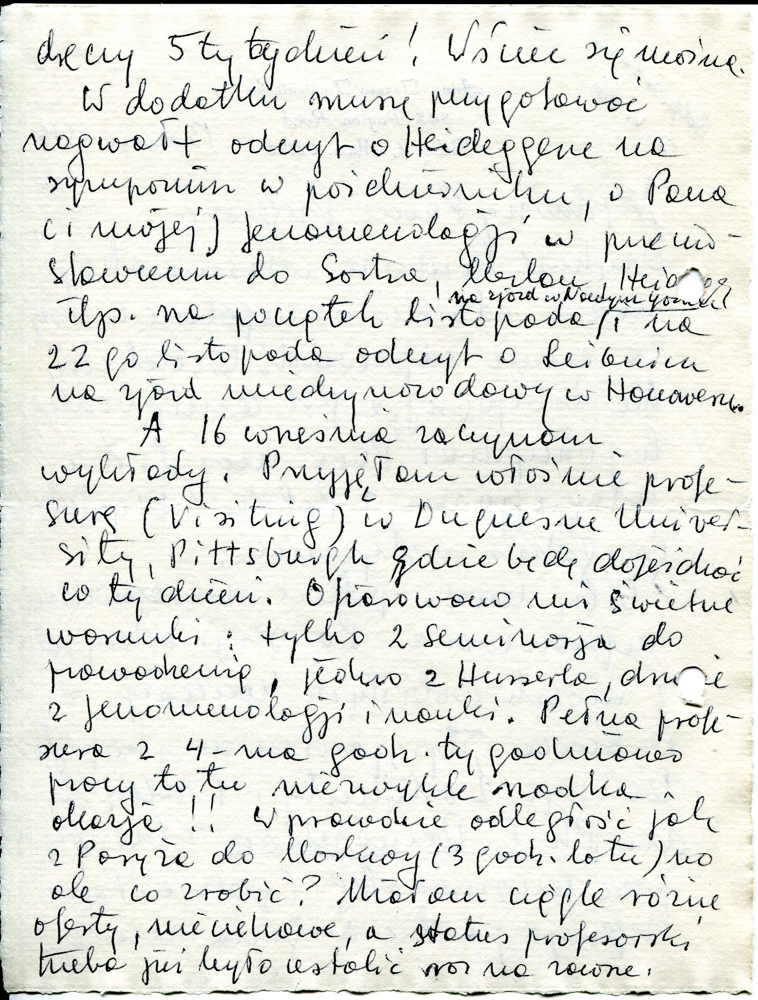 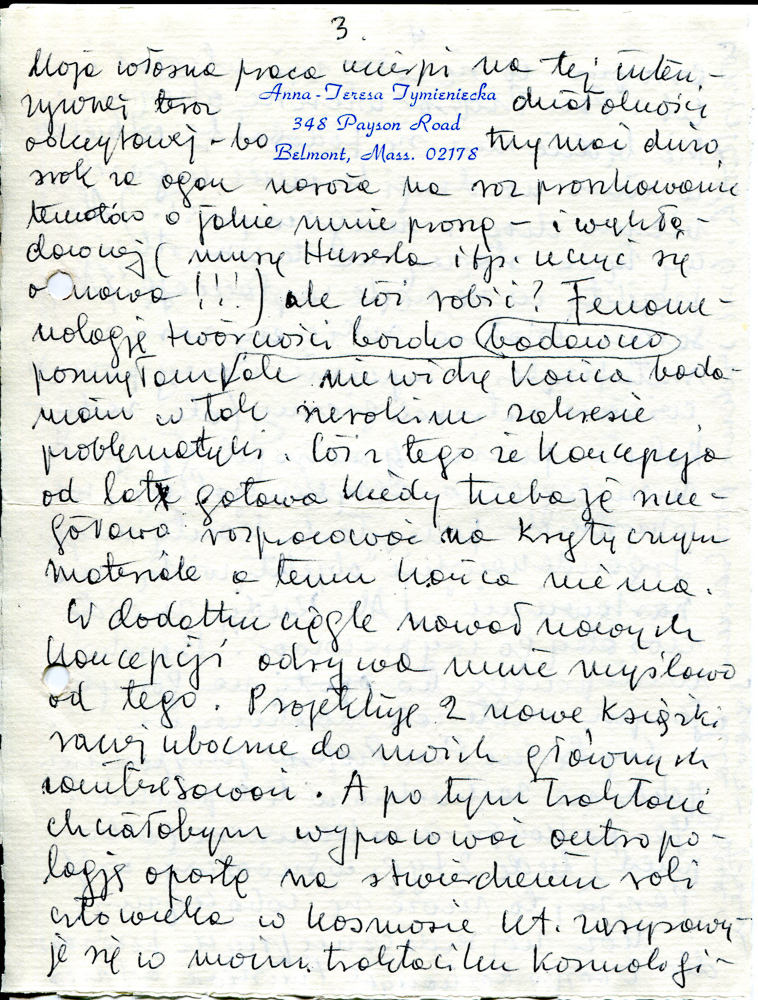 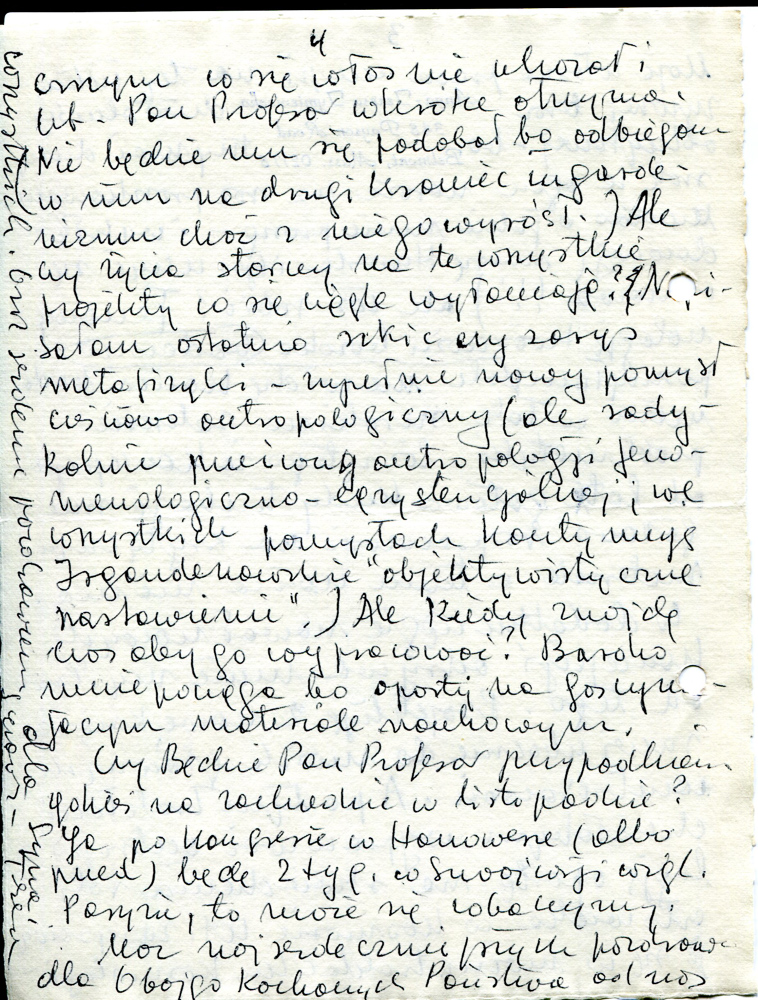 Dearest Professor,
Thank you very much for the copies I just received – I was particularly pleased with the reply to Wellek. But the bibliography is very valuable. Has Madam received my letter with photos from Poland? I sent it sometime in January.
v  I am extremely busy at the moment. After a series of lectures in my personal concepts, from Leibniz, etc., I should be currently finishing 2 articles and a review for Phil. Rundschau on contemporary phenomenological works (wherein I present you as well) and yet the tonsillitis has already been draining my energy for almost 5 weeks now! It can drive one mad. In addition, I have to prepare a lecture on Heidegger for a symposium in October, about your (and my) phenomenology in comparison with that of to Sartre, Merlau, Heidegger, etc. for the congress in New York at the beginning of November and a lecture on Leibniz for the international congress in Hannover on 22 November.
v  And on September 16 I start university lectures at the. I have just accepted the position of a visiting professor at Duquesne University, Pittsburgh, where I will be commuting every week. Great conditions were offered to me: only two seminars to conduct, one on Husserl, the second one on phenomenology and science. Full professorship with just 4 hours of classes a week is an extremely rare opportunity here!! The distance is like from Paris to Moscow (3 hours’ flight), but what to do? I had various other uninteresting offers, but the professorial status had to be established once and for all. My own work suffers from this intensive conference activity now – because trying to hit to omany birds with one stone exposes me to the danger of my subject matter getting scattered (I have to study Husserl etc. all over again!!!) – but what to do? I have expanded the phenomenology of creativity, but I see no end to research with such a wide range of issues. So what if the concept has been ready for years when it needs to be worked out in detail on critical material and there is no end to it. In addition, the constant influx of new ideas keeps me distracted from it.
v  I am preparing 2 new books which are rather in the periphery when it comes to my main interests. And after this treatise, I would like to develop an anthropology based on the determination of the role of man in space which has been outlined in my cosmological treatise which just came out and which Professor will soon receive. (You will not like it because it oscillates on the side opposite of Ingardenism, although it stems out of it.) But is life long enough for all these projects that are still emerging? I have recently written a sketch, or an outline of metaphysics – a completely new idea, partly anthropological (but radically opposed to phenomenological and existential anthropology; in all my ideas I continue Ingarden’s “objectivist attitude”). But when will I find time to elaborate it? It seems very appealing to me, as it is based on fascinating scientific material.
v  Will you be going anywhere west in November? I will be staying in Switzerland or Paris for 2 weeks after (or before) the Congress in Hannover, maybe we could meet.

v  Warmest greetings to you both from all of us. And best regards to your son and daughter-in-law – Teresa