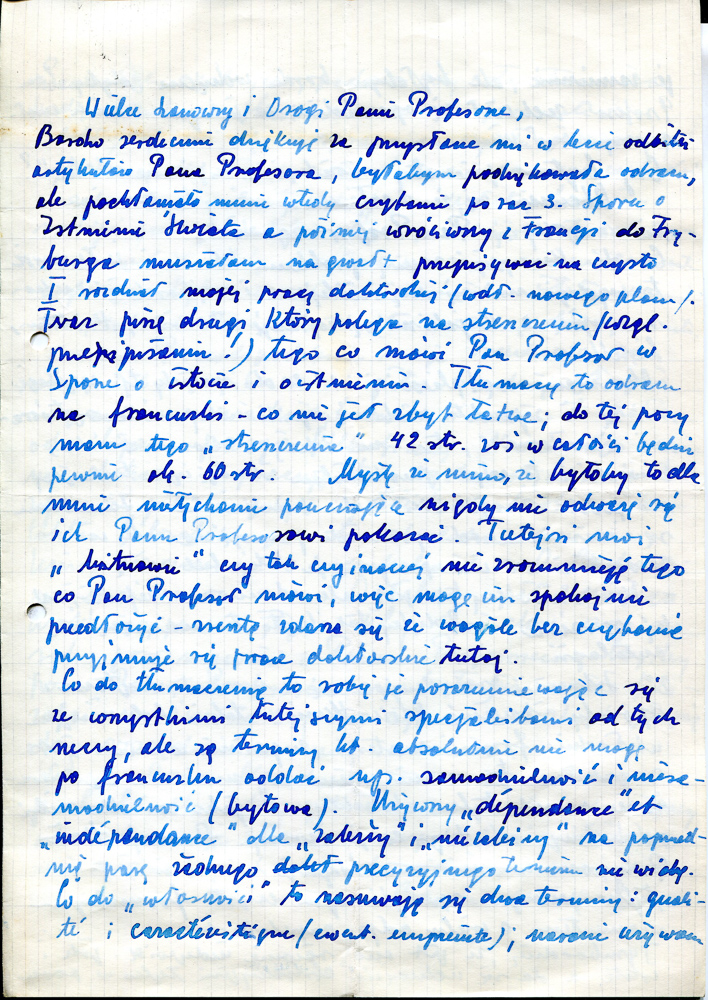 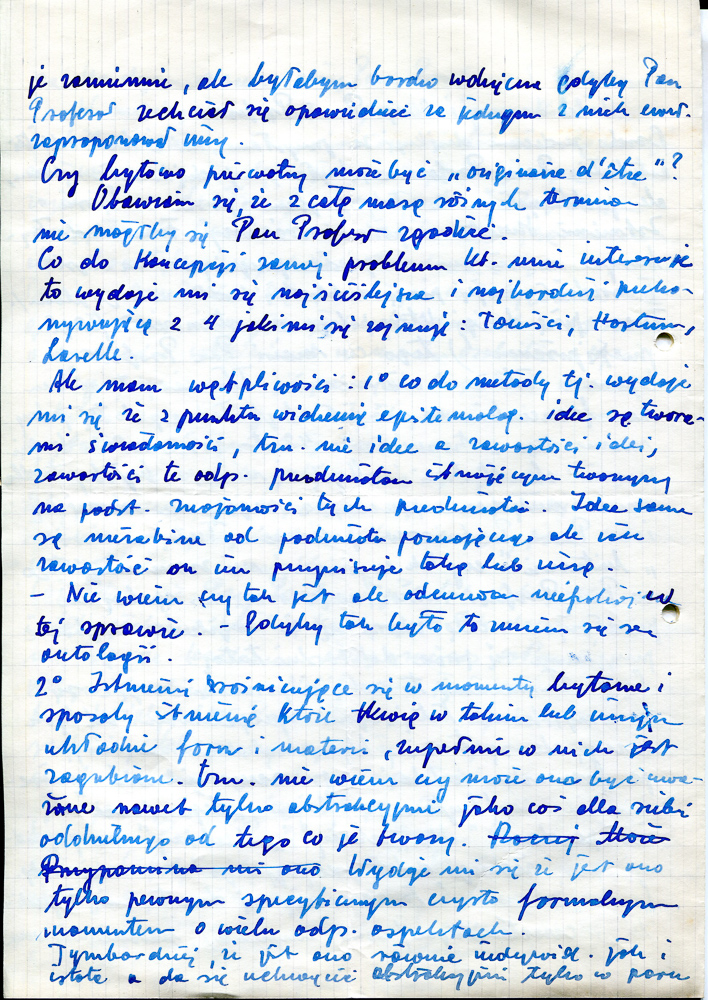 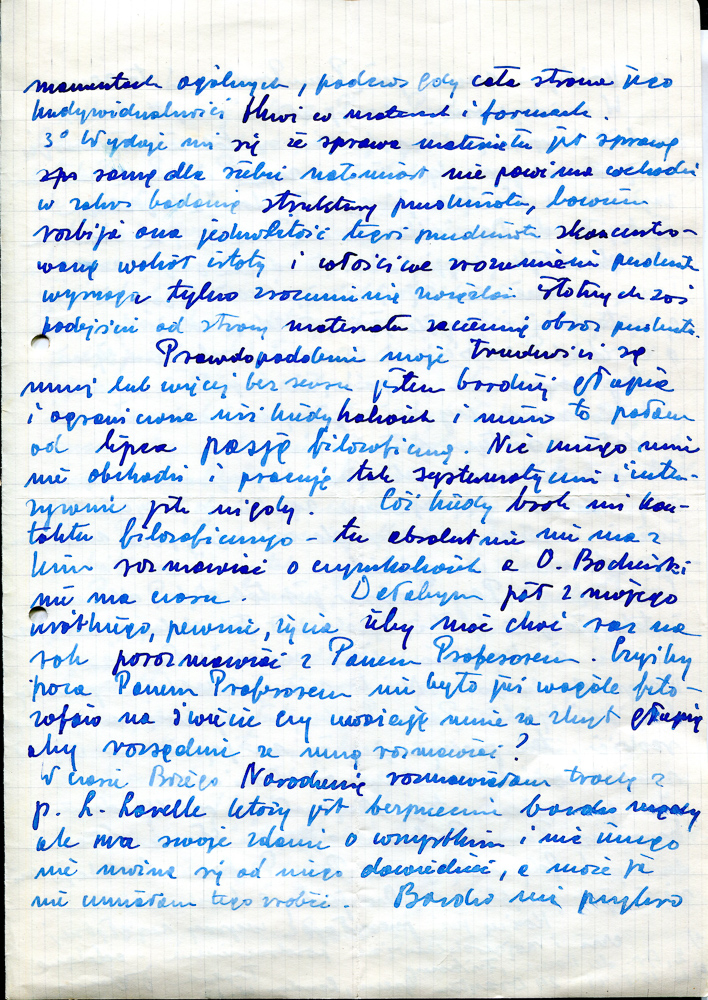 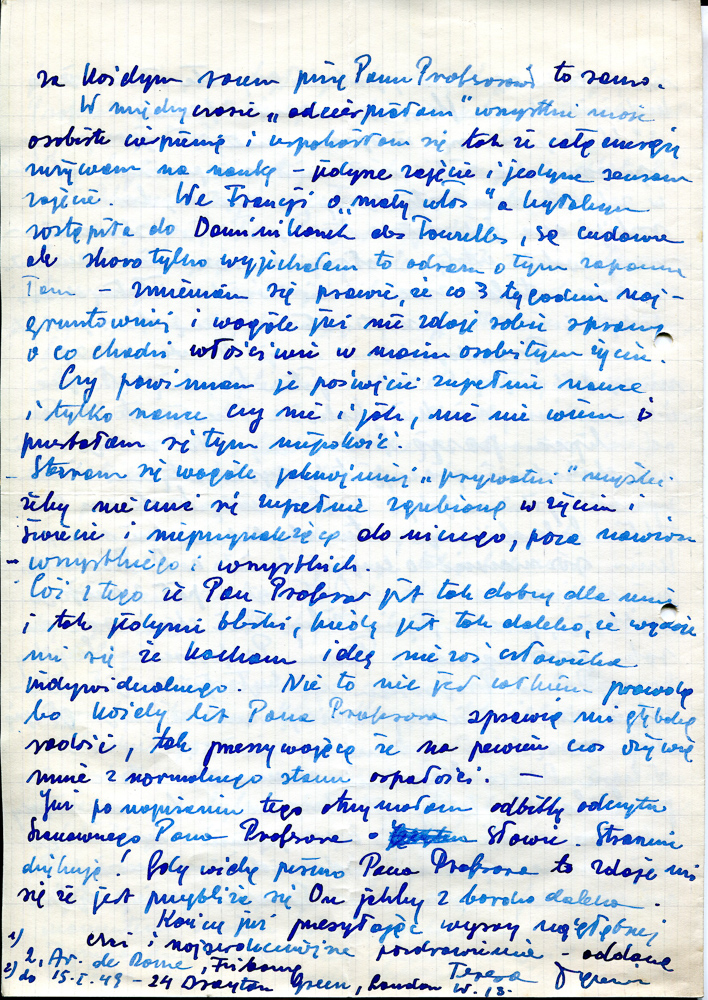 v     Dear Professor,
Thank you very much for copies of Professor’s articles sent to me in the summer, I would have thanked you right away, but I was absorbed in reading the Controversy over the Existence of the World for the third time, and later, having returned from France to Freiburg, I had to rewrite the first chapter of my doctoral dissertation (according to the new plan). Now I am writing the second one, which consists of a summary (or rewriting!) of what you say about essence and existence in the Controversy. I am translating it into French as I go – which is not very easy; so far I have around 42 pages of this “summary”, and the entire thing will probably be come up to around 60 pp. I think that although it would be extremely educational for me, I will never dare show them to Professor. Here, my “Mentors” will not understand what Professor is saying anyway, so I can easily submit it to them – it even occurs here that they accept dissertations without reading them at all.
As for the translation, I am doing it in communication with all local specialists in these things, but there are terms which I absolutely cannot convey in French, for example, autonomy and non-autonomy (existential) in French. Having used “dépendence” et “indépendence” for “dependent” and “independent” I cannot find any precise translation for the previous pair. As for “qualities”, two terms come to mind: qualité and caractéristique (possibly empreinte); for now, I use them interchangeably, but I would be very grateful if Professor could choose one of them, or maybe propose another.
v     Can existentially original be “originaire d’être”? I am afraid that you would be unable to agree with a number of different terms.
As for the concept of the problem itself I am interested in, it seems to be closest to that of four of those I was dealing with: Tomists, Horton, Larelle.
v     But I have my doubts: 1° as to the method i.e. I think that from the epistemological point of view ideas are creations of consciousness, i.e. not ideas but the contents of ideas, these contents corresponding to existing objects created on the basis of cognizance of these subjects. Ideas themselves are independent of the cognizant subject, but the latter attributes them with given contents. – I don’t know if this is the case, but I feel uneasy about it. – If that were the case, the sense of the ontology would change.
2° Existence that differentiates into existential moments and modes of existence that are stuck in one or another system of forms and matter is completely lost in them, that is, I am not sure if it can be considered, even only in abstract terms, as something in itself separate from what creates it. It seems to me that it is only a specific purely formal moment with many corresponding aspects.
Especially since it is as individual as the essence, and can only be grasped abstractly in a few general moments, while the whole of its individuality lies in matter and forms. 3° it seems to me that the matter of material is an issue in and of itself, but it should not fall within the scope of the study of the structure of the object, because it breaks the uniformity of the said object focused around its essence, and the proper understanding of the object only requires understanding of the relevant relations, and the material approach obscures the image of the object.
v     My difficulties are probably more or less meaningless, I am more stupid and limited than ever, and yet I have been burning with philosophical passion since July. I do not care and I work as systematically and intensively as never before. What of it, when I lack philosophical contact – there is absolutely no one here to talk to, and Father Bocheński has no time. I would give half of my, surely short, life to be able to talk to you, Professor, at least once a year. Could there be no other philosophers in the world besides Professor, or do they all consider me too stupid to talk reasonably with me?
During Christmas I talked a bit with Mr. L. Larelle, who is undoubtedly very clever, but has his opinion about everything and nothing else can be learned from him, and maybe it was just me who was unable to do it. I am very sorry every time I write the same thing again to Professor.
v     In the meantime, I have “gotten through” all my personal suffering and calmed down, so now I use all my energy for learning – my only activity, and the only reasonable one. In France, I was a ” hair’s breadth away” from joining the Dominican Sisters of des Tourelles, they are wonderful, but as soon as I left, I immediately forgot about it – I change most thoroughly almost every 3 weeks, and I do not know what is actually going on in my personal life anymore. I don’t know whether or not I should devote it entirely to science and how, I don’t know anything and I stopped worrying about it.
I try to, at least “privately”, think as little as I can not to feel completely lost in life and the world and as if I don’t belong anywhere, on the margins, far away from everything and everyone.

v     So what if you are so good and so close to me, Professor, when you are so far away that it seems to me that I love some idea and not an individual. No, this is not entirely true, because every letter from Professor gives me deep joy, so piercing that it revives me from my normal state of drowsiness for some time. –
v     After I wrote this I have received a transcript of Professor’s lecture on Words. Thank you so much! When I see Professor’s handwriting, it seems to me that the distance is shrinking, in a way.