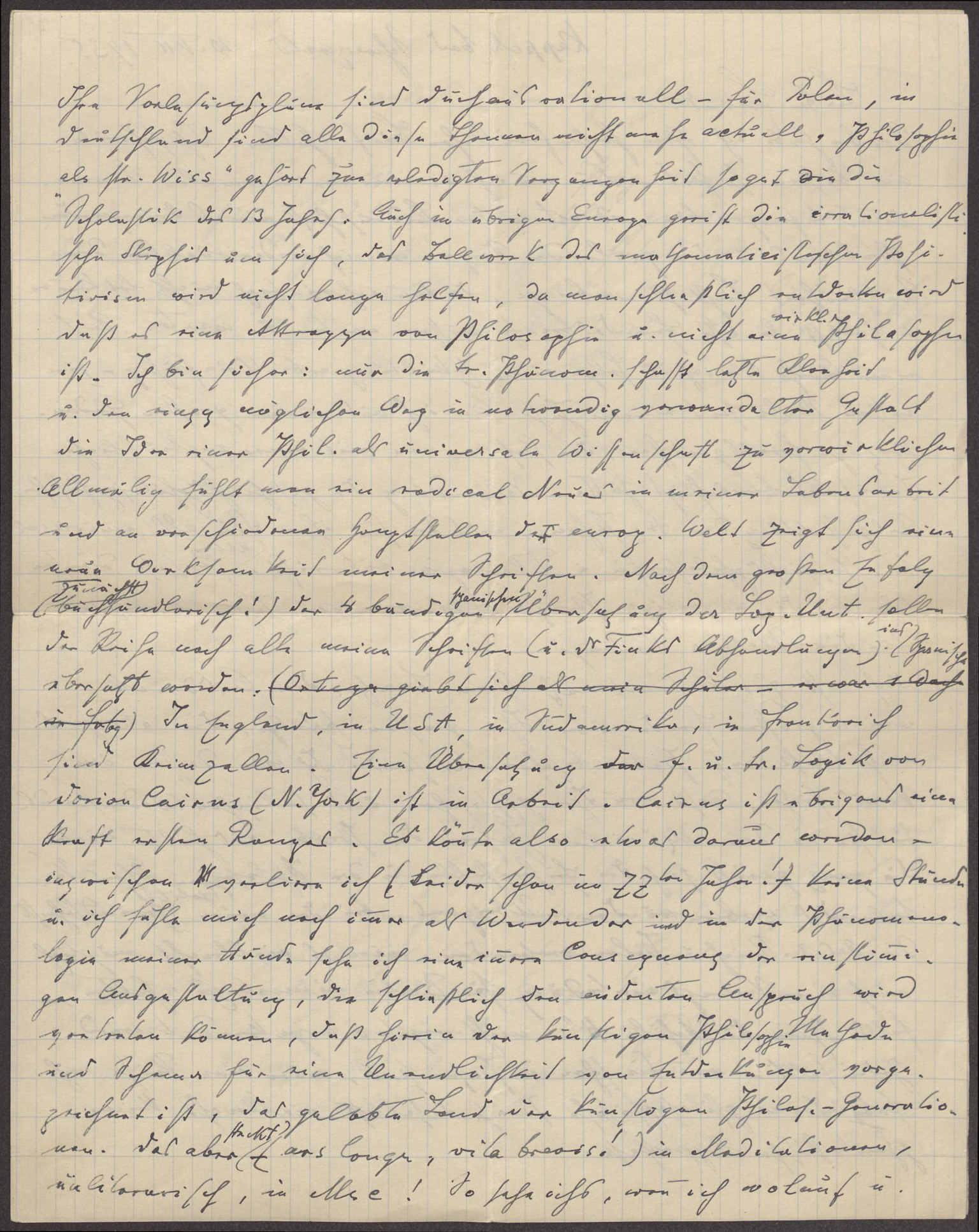 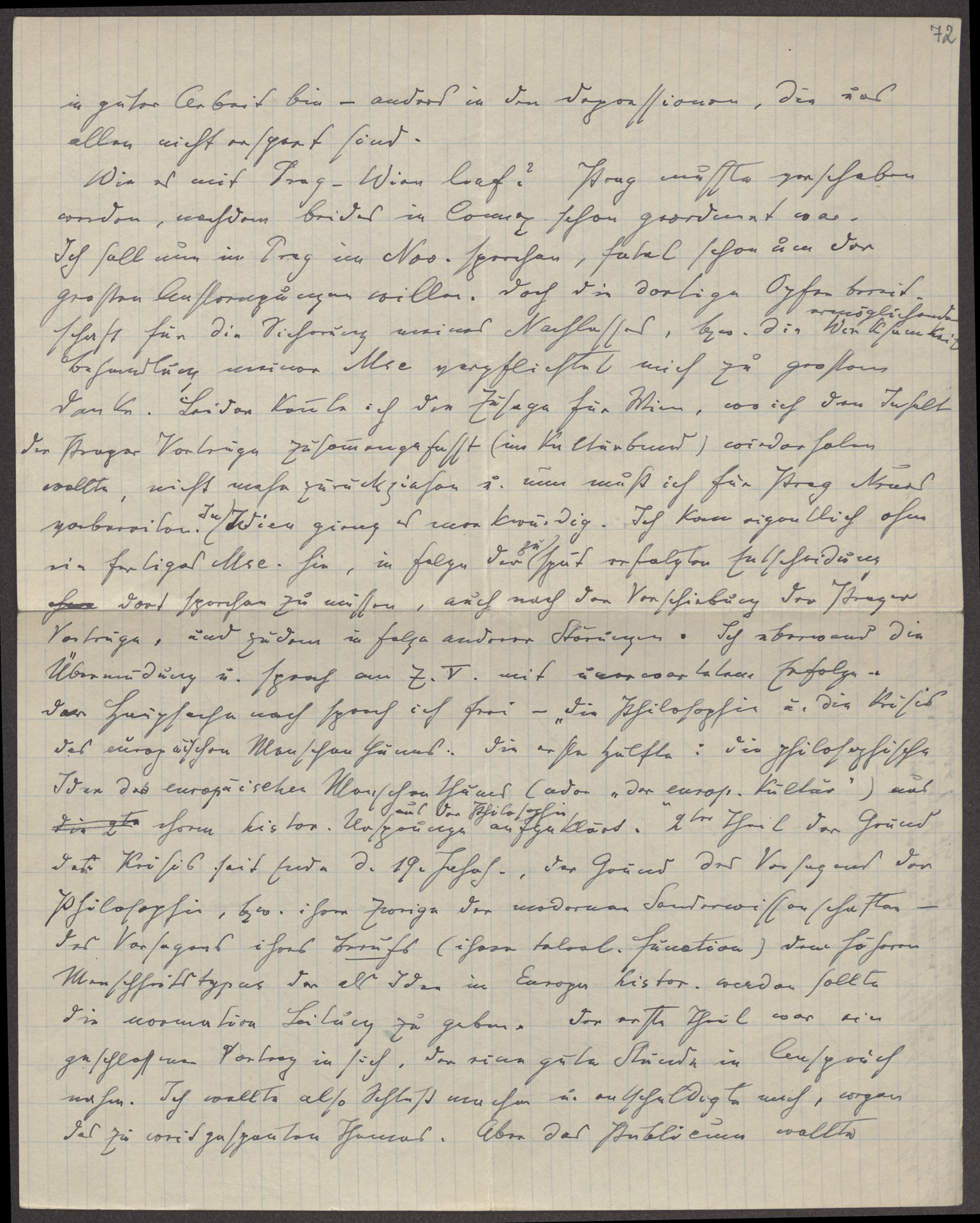 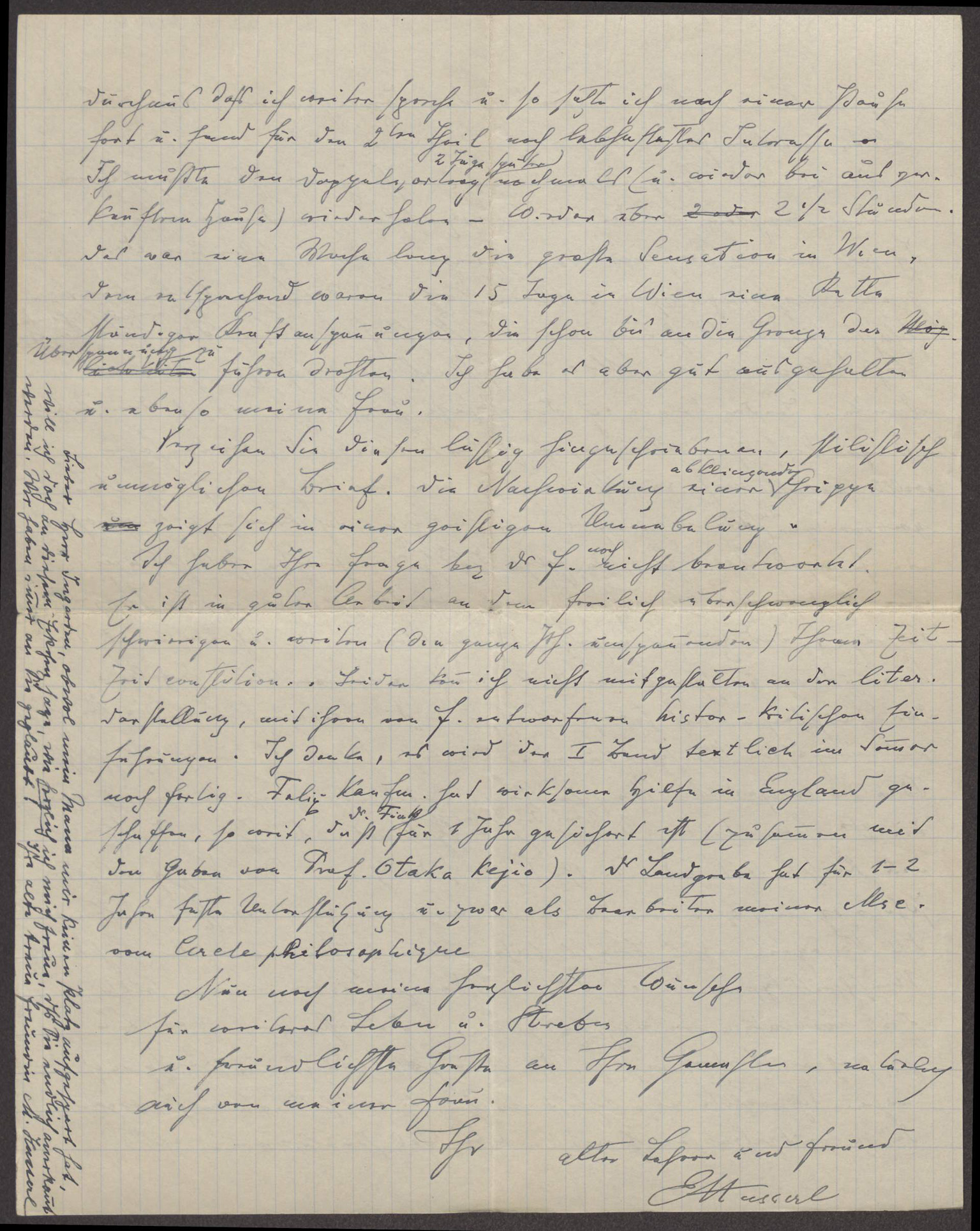 I have just received your very encouraging letter. It is best when I reply immediately, because once I get caught up in my usual anomaly, i.e. in the passion of a pressing problem and the agonizing worry of bringing light into the clouds of obscurity, I simply cannot break away from it; and even letters to my dearest friend have to wait. I have been unable to work for a week now due to a cold – and for the first time in a year, I have been derailed from my great train of thought which had an incredible hold on me – the completion of the historical and philosophical development of tr[anscendental] phen[omenology] with which it completes its meaning as a universal tr[ancendental] philosophy of history and teleology.76 Earlier concepts served as the basis for the unfinished Prague ess[ay] of the previous year and again for the lectures in Vienna.

But first, in response to your letter, I would like to express my great joy at your great successes, which are, by the way, not limited to Poland. I always knew that if your physical and emotional resilience were to endure throughout the many years, you would most certainly conquer the leadership position in the field of philosophy of your homeland. By the way, considering the new political friendship between the Third Reich and Poland, perhaps it would also be possible to receive an invitation for a lecture in Berlin – if the school of H[usserl] is not held against you. Anyway, if you are already in Posen, a trip to Fr[eiburg] and a philosophical escape while in the area may not be unreasonable.

Your lecture plans are quite rational – for Poland. In Germany, all of these issues are no longer current.77 Philosophy “as a str[ict] sci[ence]” is considered a thing of the past, as scholasticism of the 13th century. Whereas also in the rest of Europe, irrational skepticism is running rampant, the fortress of mathematical positivism will not endure, since it will eventually be discovered that it is a mock of philosophy and not real philosophy! Philosophy is. I am certain of this: Only tr[anscendental] phenom[enology] creates ultimate clarity and the only possible way in a necessarily transformed form to realize the idea of ​​philosophy as a universal science. Gradually, something radically new is being discovered in my life’s work, and my writings show a new level of effectiveness at various central locations across Eu[rope]. After the great success (initially for booksellers!) of the four-volume Spanish translation of Log[ical] Inv[estigations], all of my writings are to be translated in sequence (including Dr. Fink’s essays) into Spanish. There are cells in England, the USA, in South America, and in France. A translation of F[ormal] and Tr[anscendental] Logic by Dorion Cairns (N[ew] York) is in progress. By the way, Cairns is a first-rate translator. Hence, it might work out. In the meantime, I do not want to lose any time (unfortunately, I am already in my 77th year!) and I still feel that I am growing intellectually. In my phenomenological work, I see an inner consequence of concordant structuring, which will eventually be able to prove the evident claim that the future methodology and scheme of philosophy are sketched out for an infinity of discoveries – the Promised Land for future generations of philosophers. However, this is contained in (ars longa, vita brevis!) meditations, non-literary, in manuscripts! That’s how I see it when I am doing well, and I am working hard – but this has not been the case when I am dealing with depression of which none of us is spared.

How it went with Prague and Vienna? Prague had to be postponed, after both had already been arranged in connection with each other. I am to speak in Prague in November, which is bad because of the great effort it entails. However, I am greatly indebted due to the local dedication for the preservation of my work or the processing of my manuscripts. Unfortunately, I was unable to cancel my event in Vienna, where I was going to present a summarized version of the content of my lecture from Prague (at Kulturbund), which means that I will have to prepare a new presentation for Prague. The event in Vienna was a bit peculiar. I actually arrived without a complete manuscript as a result of the late decision to speak there and after the postponement of the Prague lectures, and also as a result of other interruptions that occurred. I overcame my fatigue and gave a speech on 7.V. with unexpected success. I mostly spoke freely on “Philosophy and the Crisis of European Humanity.” The first half consisted of the philosophical idea of the European humanity (or “the European culture”) and its histor[ical] origin explained on the basis of philosophy. The second part: The cause of the crisis beginning at the end of the 19th century, the reason for the failure of philosophy or rather its branches of modern special sciences – the failure of the profession (its teleol[ogical] function), the higher type of humanity which was to become a histor[ical] idea in Europe, to become normative. The first part was a separate lecture, which took about an hour. Hence, I was going to end the lecture at that point and apologized for this rich and far-flung topic. However, my audience insisted that I continue to speak, and therefore, I continued after a break and found lively interest for the second part. I had to repeat the double lecture two days later (again, it was a sold-out event), and spoke for over 2.5 hours. That was considered a great sensation in Vienna for one week. Accordingly, the 15 days in Vienna constituted a chain of constant exertion, which was quite straining. Nevertheless, I managed to handle the stress well, and so did my wife.

Please forgive me for this casually written, stylistically unacceptable letter. The aftereffects of the flu manifest themselves in mental fog.

I have not yet answered your question regarding Dr. F[ink]. He has been zealously working on the admittedly exuberantly difficult and far-flung (spanning the entire ph.*) topic time – time constitution. Unfortunately, I cannot assist with the literary presentation, with the histor[ical]- critical introductions developed by you and F[ink]. I think the first volume should be completed in the summer. Felix Kaufm[ann] provided effective aid in England, to the extent that Dr. Fink has enough support to continue his work for one year (along with the gifts of Professor Otaka Kejio). Dr. Landgrebe received solid support from Cercle Philosophique for 1-2 years, as an editor of my manuscripts.

Finally, I am sending you my best wishes for a bright and successful future. Please send my regards to your wife too (also from my wife).

Your old teacher and friend

Dear Mr. Ingarden, Although my husband has not saved any space for me, I want to use this little corner to express how delighted I am to hear that you are finally being recognized. We always believed in you! Your loyal friend, Malvine Husserl