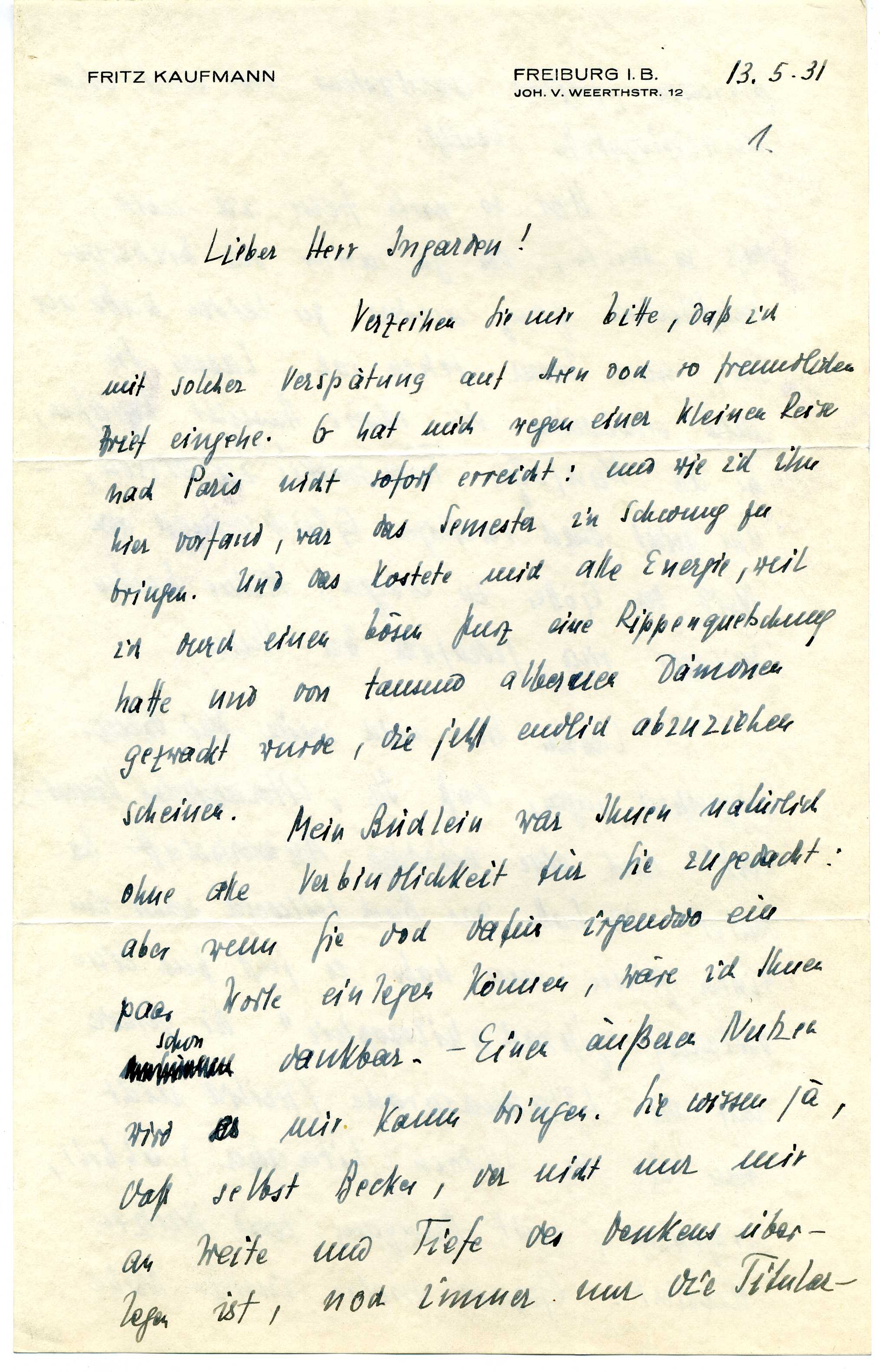 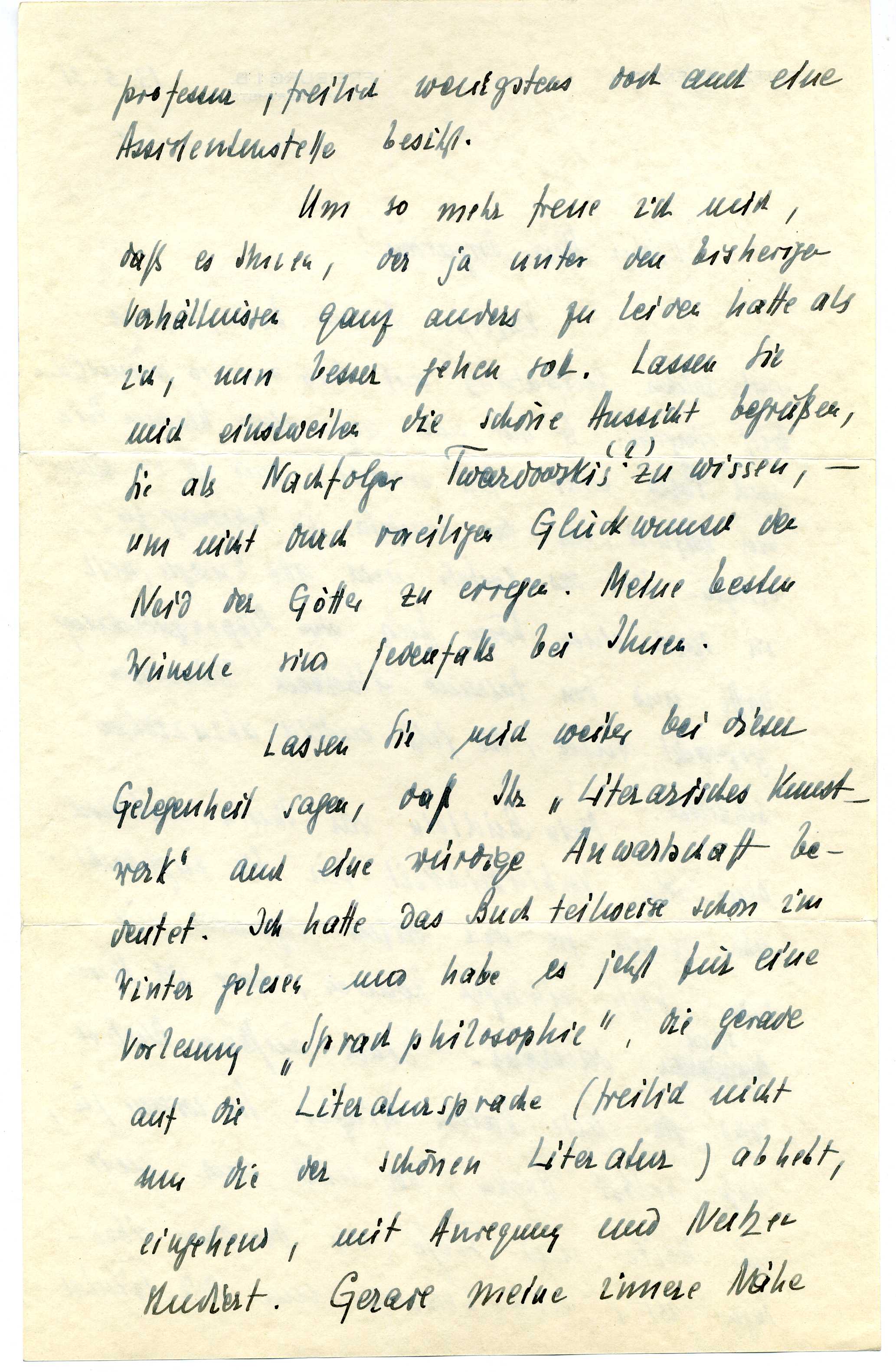 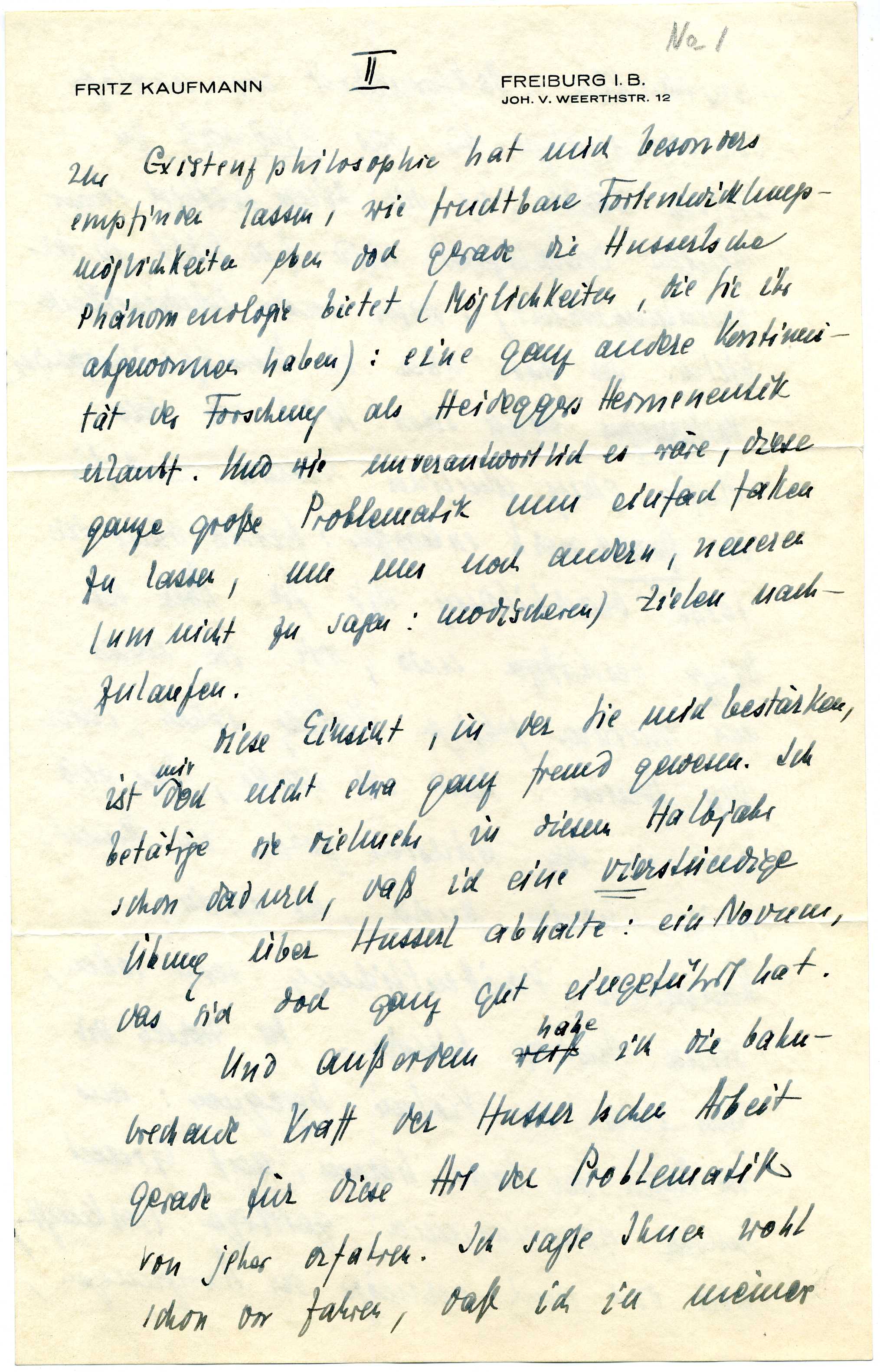 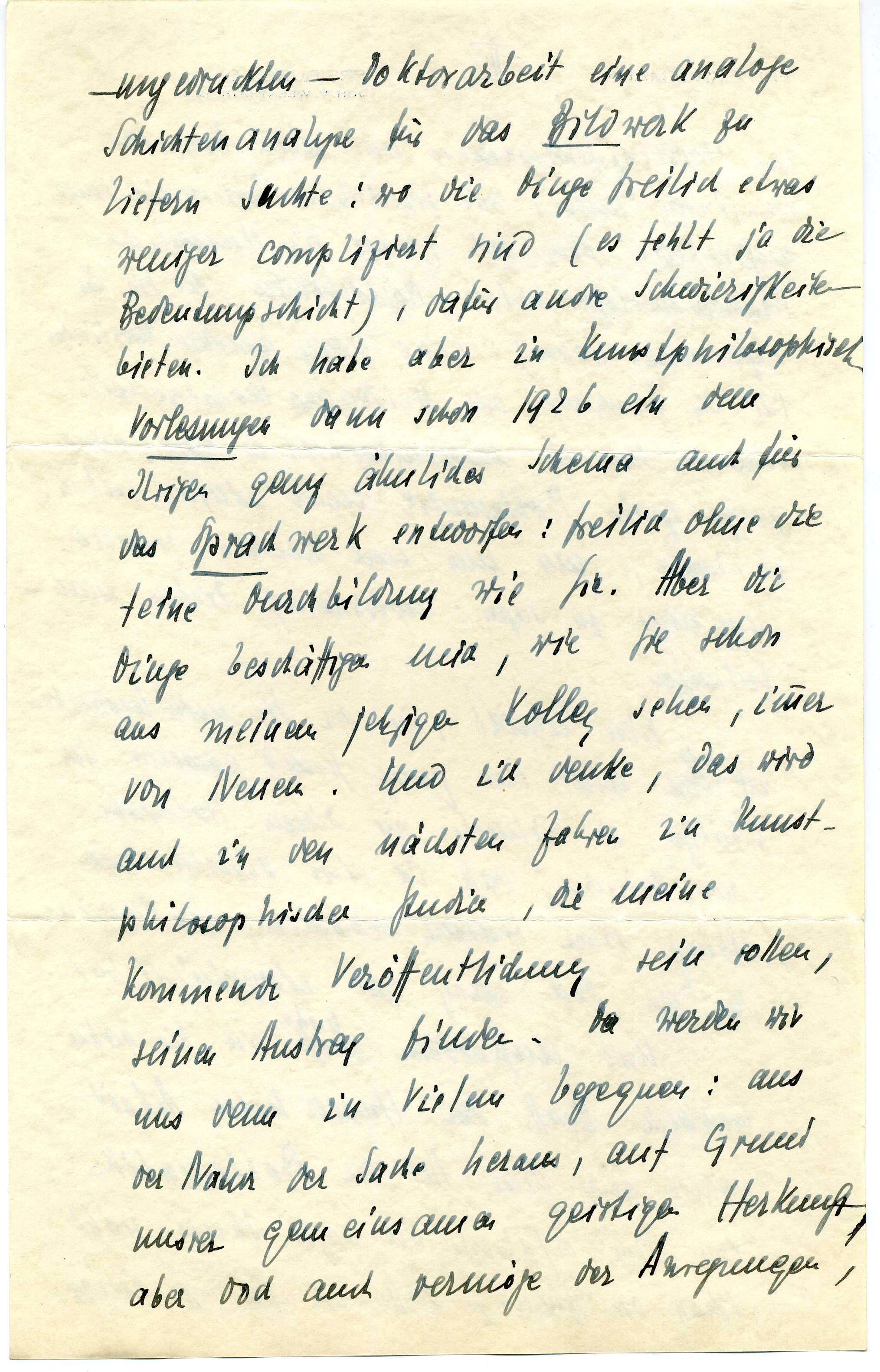 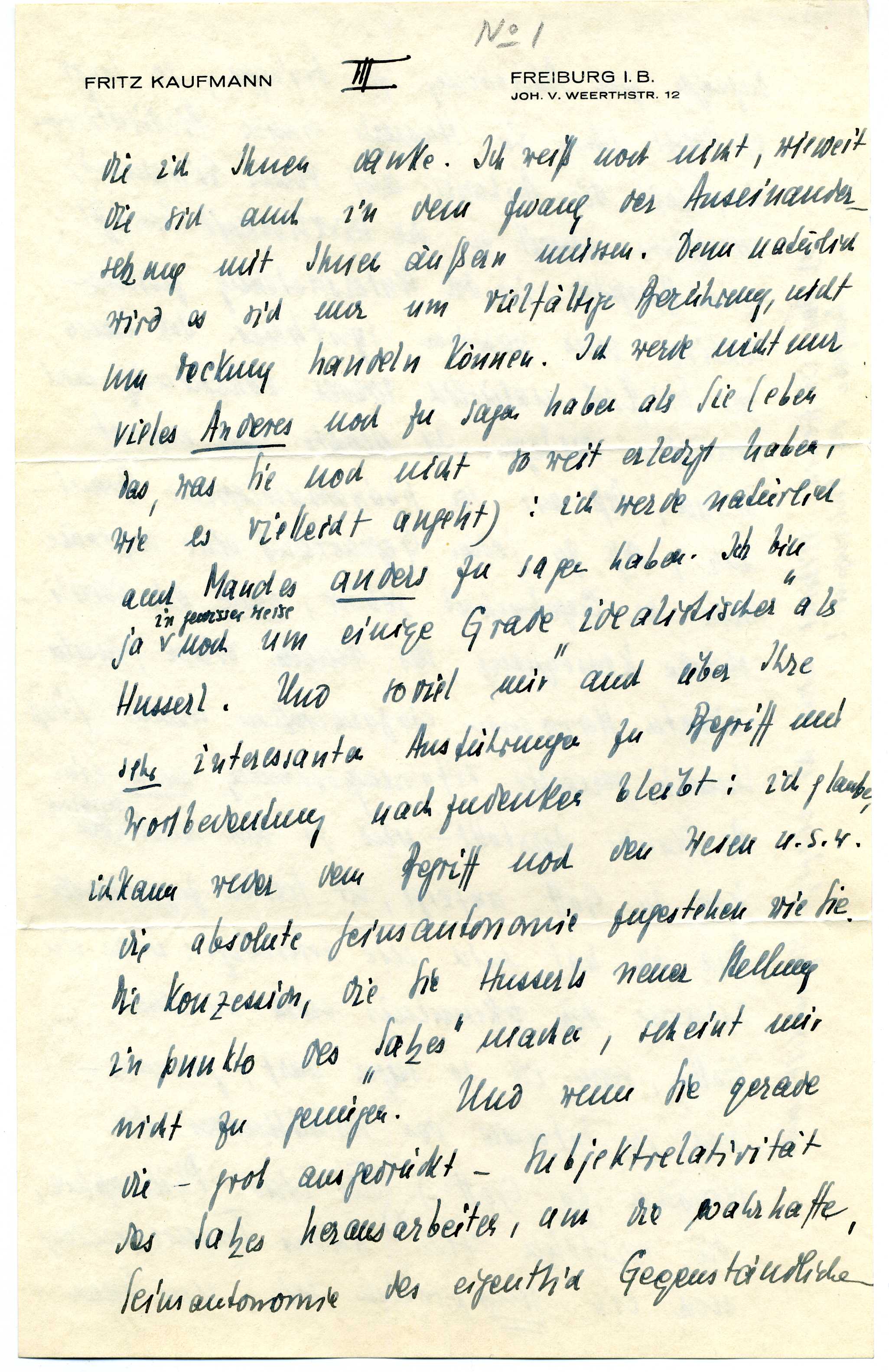 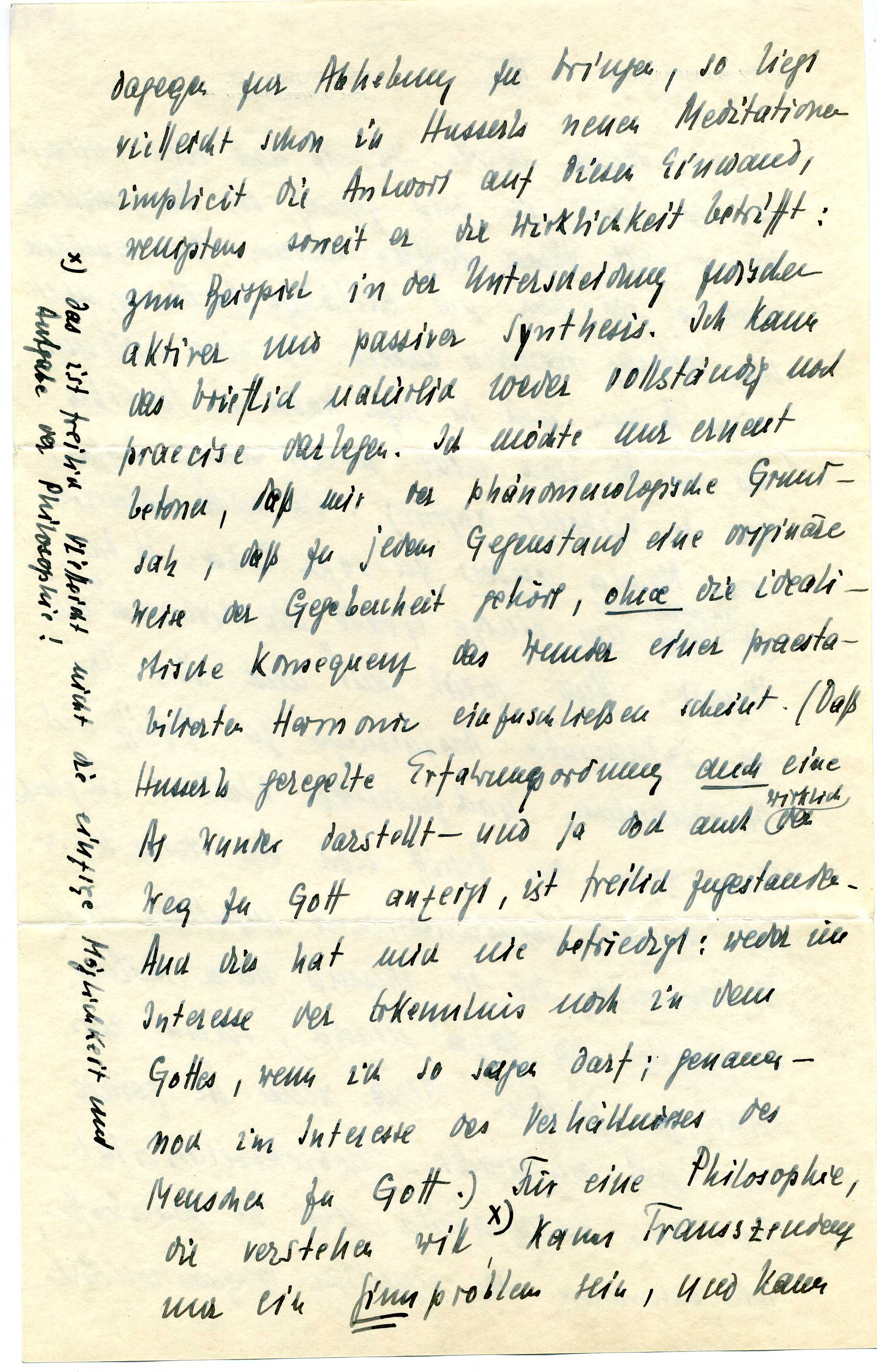 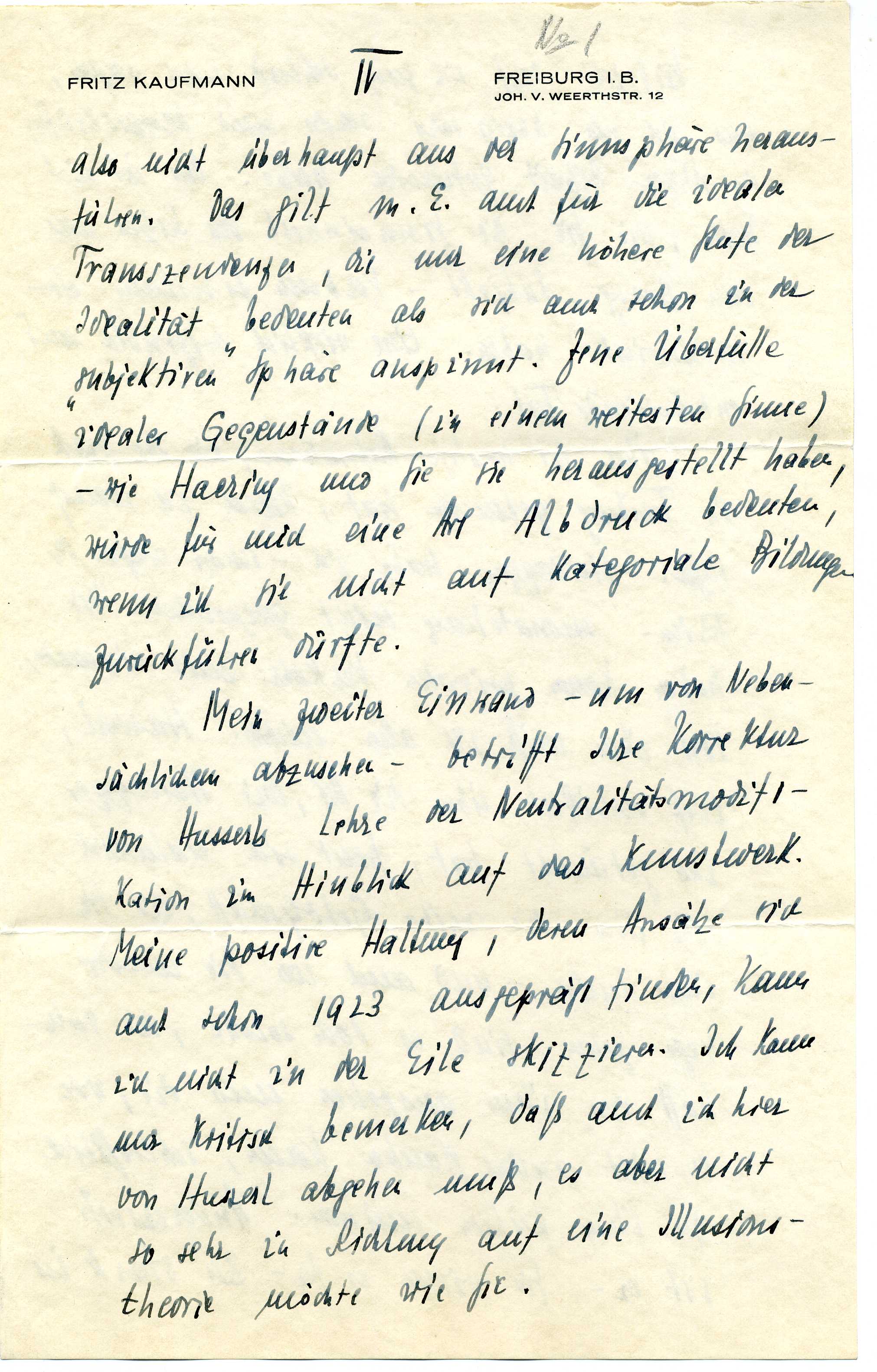 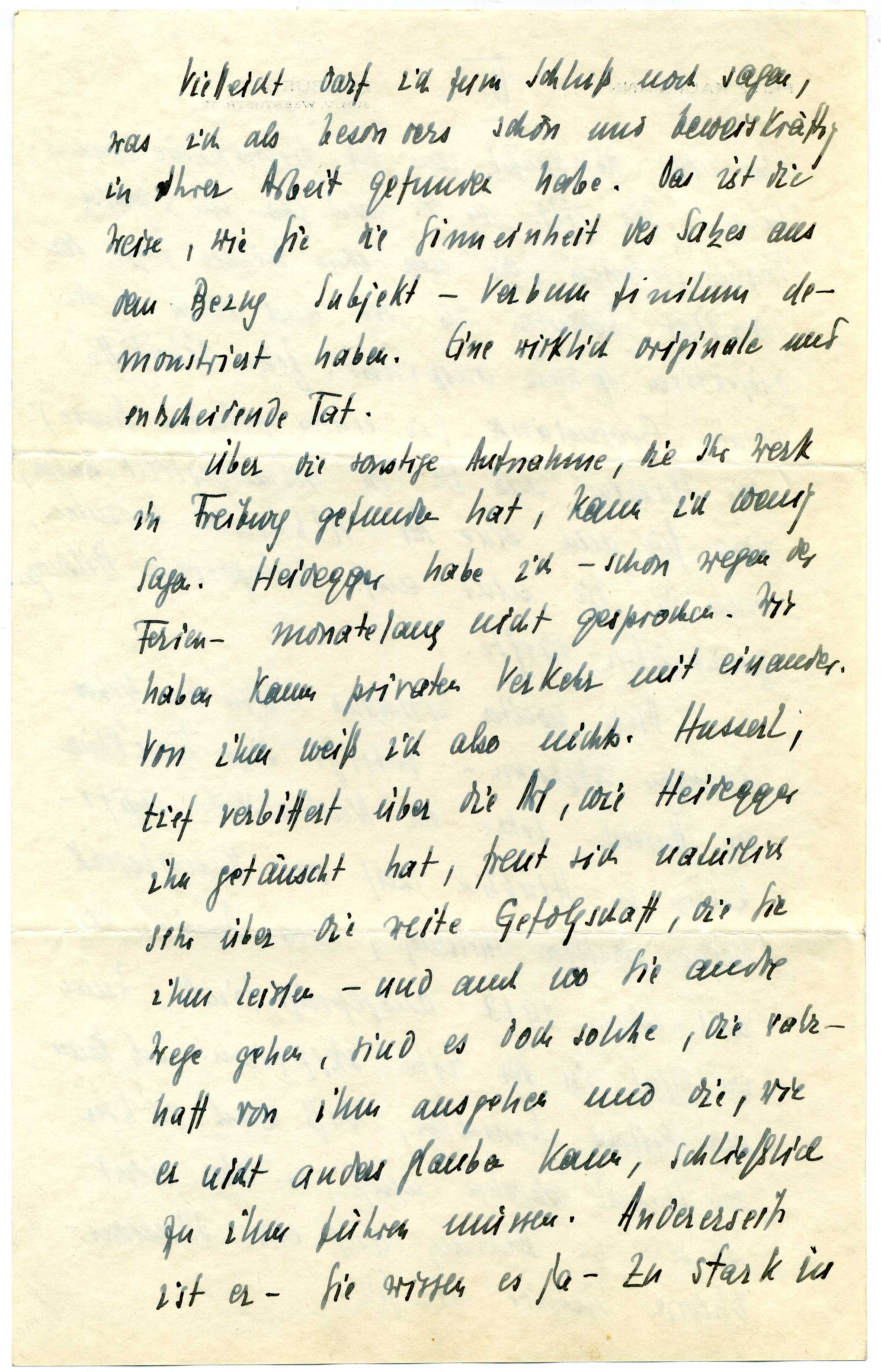 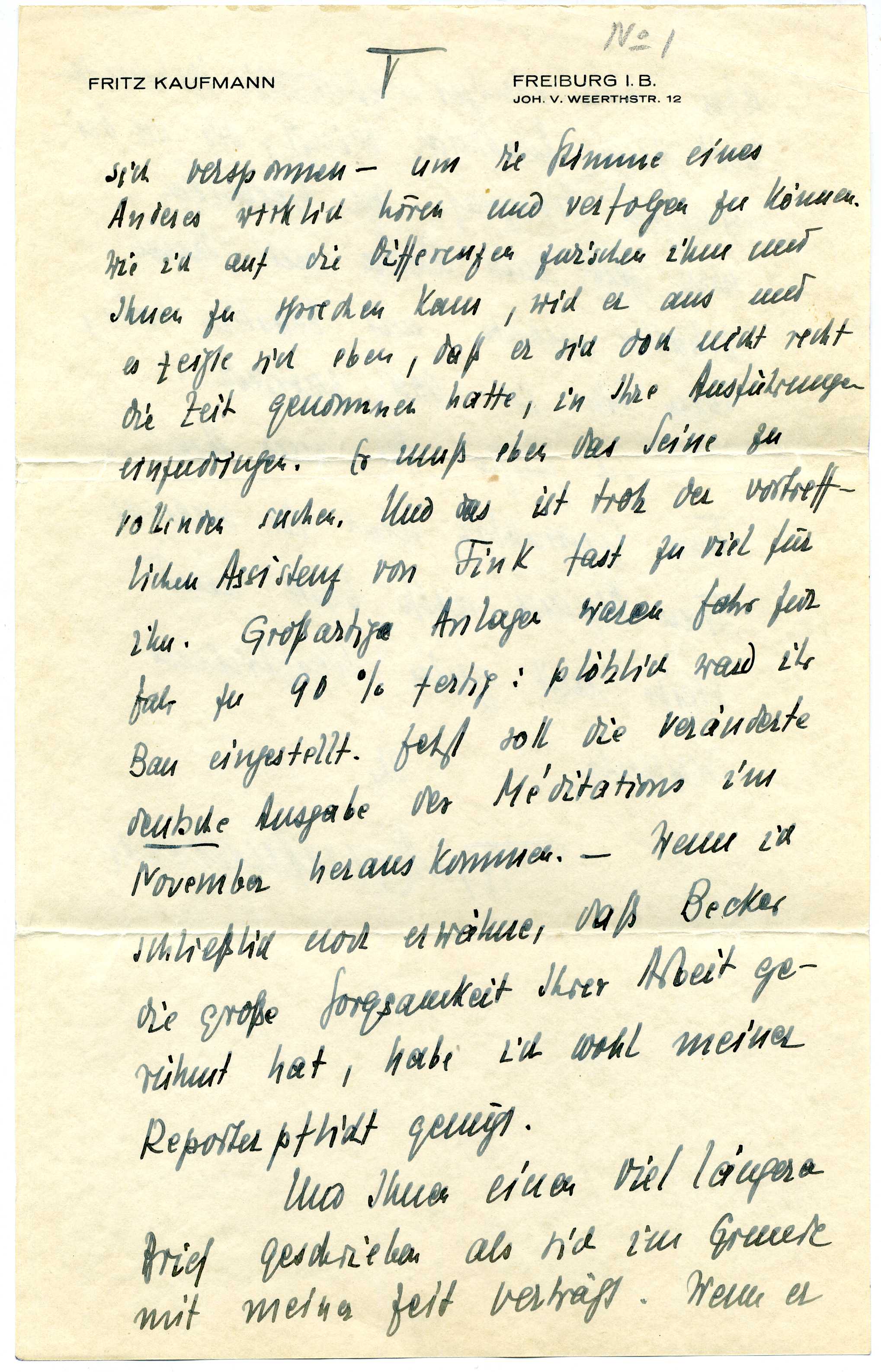 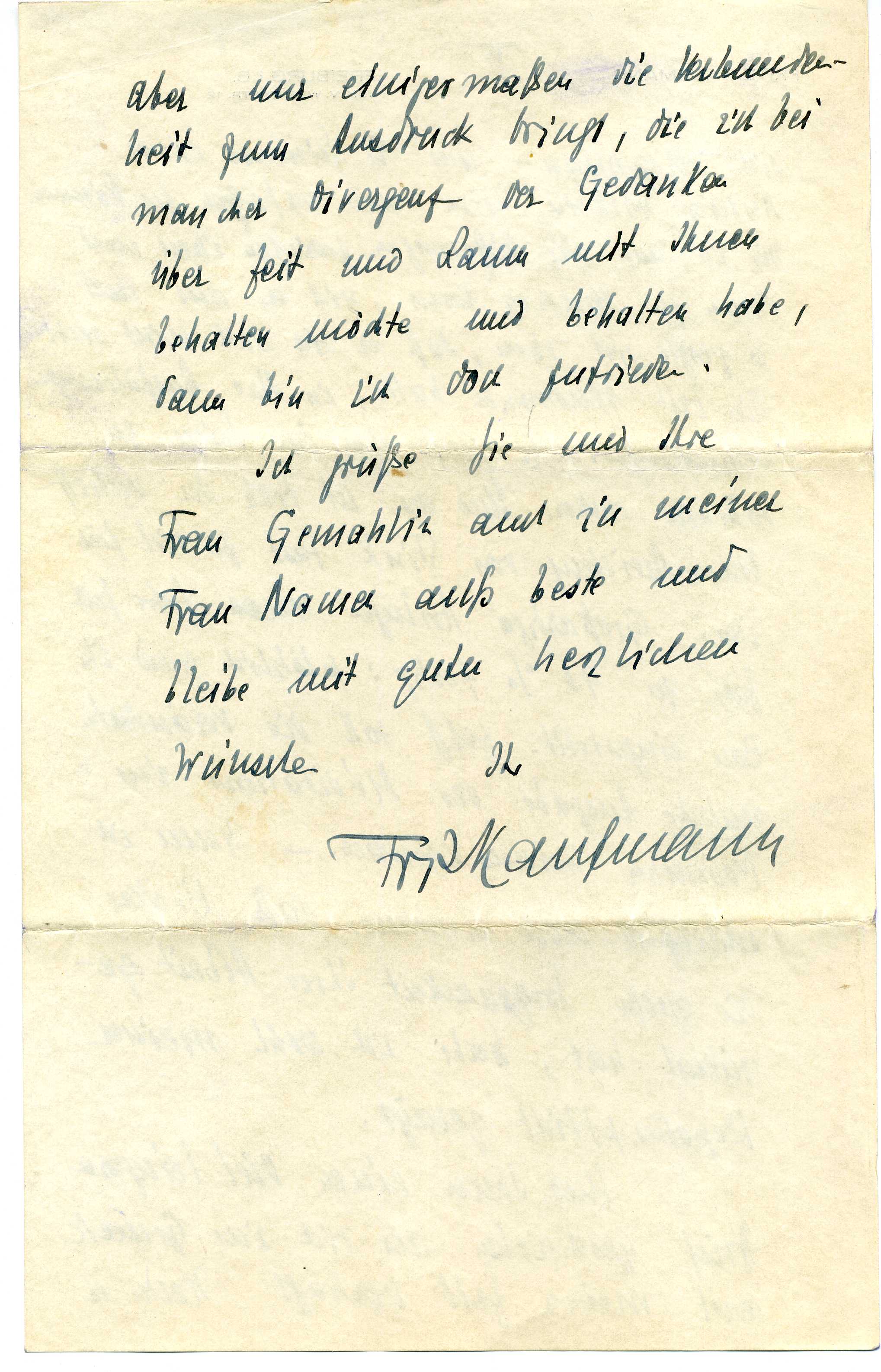 n         Please forgive me for taking so long to reply to your kind letter. I received it late because I went on a short trip to Paris and upon my return, I had to prepare for the upcoming semester. Those preparations took up all of my energy because I was suffering from several bruised ribs after a bad fall. Thousands of demons have been pinching me since, but it seems as if they are finally starting to leave.
n         My little book was, of course, intended for you without any expectation of your doing something in return; however, I would certainly be grateful if you could put in a good word for me somewhere. It would not give me any external benefits. As you know, even Becker, who is superior to me when it comes to the width and depth of thought, still only holds the honorary professorship, but at least also has an assistant position.

n          Thus, I am all the more pleased to hear that you, as someone who has been suffering under the existing conditions differently than me, are reportedly doing better. For now, let me enjoy the wonderful prospect of knowing that you will be Twardowski’s (?) successor in order not to arouse the envy of the gods by congratulating you prematurely. Anyhow, I wish you all the best.

n         On this occasion, I would like to say that your “Literary Work of Art” definitely makes you a dignified candidate. I read a part of the book during winter and am now reviewing it for inspiration for a lecture entitled “Philosophy of Language” which focuses on literary language (certainly not only on the language of belles-lettres). My immense proximity to the Existential Philosophy has shown me in particular which fruitful possibilities for development Husserl’s phenomenology has to offer (possibilities that you have taken): A completely different continuity of research than Heidegger’s Hermeneutics permit. It would be irresponsible to drop this entire complex of problems to go after other, newer (not to say more fashionable) objectives.

n         This insight in which you support me has not been entirely unknown to me. I instead affirm this insight during this semester by giving a four-hour class about Husserl. A novelty that has been off to a good start.

n         Moreover, I have always experienced the groundbreaking power of Husserl’s work for this type of problem in particular. I think I told you years ago that I attempted to deliver an analogous layer analysis of the visual work in my (unprinted) dissertation: Where things are certainly a bit less complicated (because the layer of meaning is missing); however, there are other challenges. In lectures on the philosophy of art, I created a scheme for linguistic work in 1926 which is quite similar to your scheme (admittedly without the same detailed design as yours). These things continue to occupy my mind, as you can see from my completed course of lectures. I am expecting to complete a study on the philosophy of art, which will be my next publication, in the next couple of years. We will undoubtedly encounter each other in many respects: based on the nature of the matter, based on the mutual intellectual origin, and also in inspirations for which I am grateful to you. I don’t know to what extent you feel the need to address this when there is an obligation to confront these things. Of course, it may naturally involve multifaceted relationships instead of congruence. Not only will I have many different things to say than you (precisely, things that you have not yet addressed), and I might also have to say things differently.

n         That’s because, in some ways, I am a few degrees more “idealistic” than Husserl. And regardless of how much there is to think about concerning your fascinating comments on the definition and meaning of words, I believe that unlike you, I can’t concede that the definition, etc. has absolute autonomy of being. It appears that I can’t make the concession that you made regarding Husserl’s new stance on the “sentence”.

And if you carve out the – broadly speaking – subject relativity of the sentence to contrast the true autonomy of being of the actual objective, perhaps the answer is implied in Husserl’s new “Meditations” – at least as far as reality is concerned, for example, in the differentiation of active and passive synthesis. It is, of course, impossible to explain this in precise detail in a letter. On this occasion, I would like to reemphasize that I am of the impression that the phenomenological principle that each object has an originary condition (without the idealistic consequence of the miracle) includes a pre-established harmony. (I concede that Husserl’s regular experiential structure is also a kind of miracle – and actually shows the true path to God. Another thing that failed to satisfy me: Neither in the interest of the knowledge, nor in the interest of God, if I may say so; more precisely, in the interest of the relationship between humans and God.) For a philosophy which aims to understandx), transcendence can only be a noema problem and can therefore not leave the realm of sense.

x) This is certainly and perhaps not the only possibility and main objective of philosophy!

In my opinion, this also applies to the ideal transcendences which mean a higher level of ideality than in the “subjective” realm. This overabundance of ideal objects (in the broadest sense), as emphasized by Hering and you, would be a type of nightmare to me if I wouldn’t be allowed to attribute it to categorical formations.

n         My second objection concerns (disregarding minor issues) your correction of Husserl’s “Doctrine of the Neutrality Modification” with regard to the work of art. I cannot outline my positive attitude, which initially began taking shape in 1923, in a hurry. I can only note critically that I too have to depart from Husserl; however, unlike you, I don’t necessarily move into the direction of illusion theory.

n         Finally, perhaps I may add what I found particularly beautiful and conclusive in your work. It is the way you demonstrated the unity of noematic meaning with regard to subject – finite verb (verbum finitum). A truly unique and crucial deed.

n          I can say little about how your work was received in Freiburg. I haven’t spoken with Heidegger for months because of the school holidays. We are rarely in touch outside of work. Hence, I don’t have any information from him. Husserl, who is deeply embittered about the way Heidegger mislead him, is certainly pleased about the wide following you have been providing to him. Even when you take a different path, it always originates with him and (as he believes) eventually leads back to him. Then again, he is (as you know) too idealistic to hear anything else or to pursue other ideas. When I mentioned the differences between you and him, he became evasive, and I realized he had not taken the time to examine your statements deeply. Well, he just can’t help it but try to perfect his work. And despite the excellent level of support he has been receiving from Fink, he seems almost overwhelmed at this task. Magnificent buildings were completed up to 90% each year, but suddenly, construction was halted.

n         The edited German edition of the “Meditations” is supposed to be released in November.

n         And last, but not least, I would like to report that Becker praised the great diligence of your work.

n         Now I have written a much longer letter than I actually had time for. However, if it reinforces our mutual appreciation and loyalty despite some divergent thoughts concerning time and space, it is well worth it.

Application for the appointment as professor written 11.02.1931