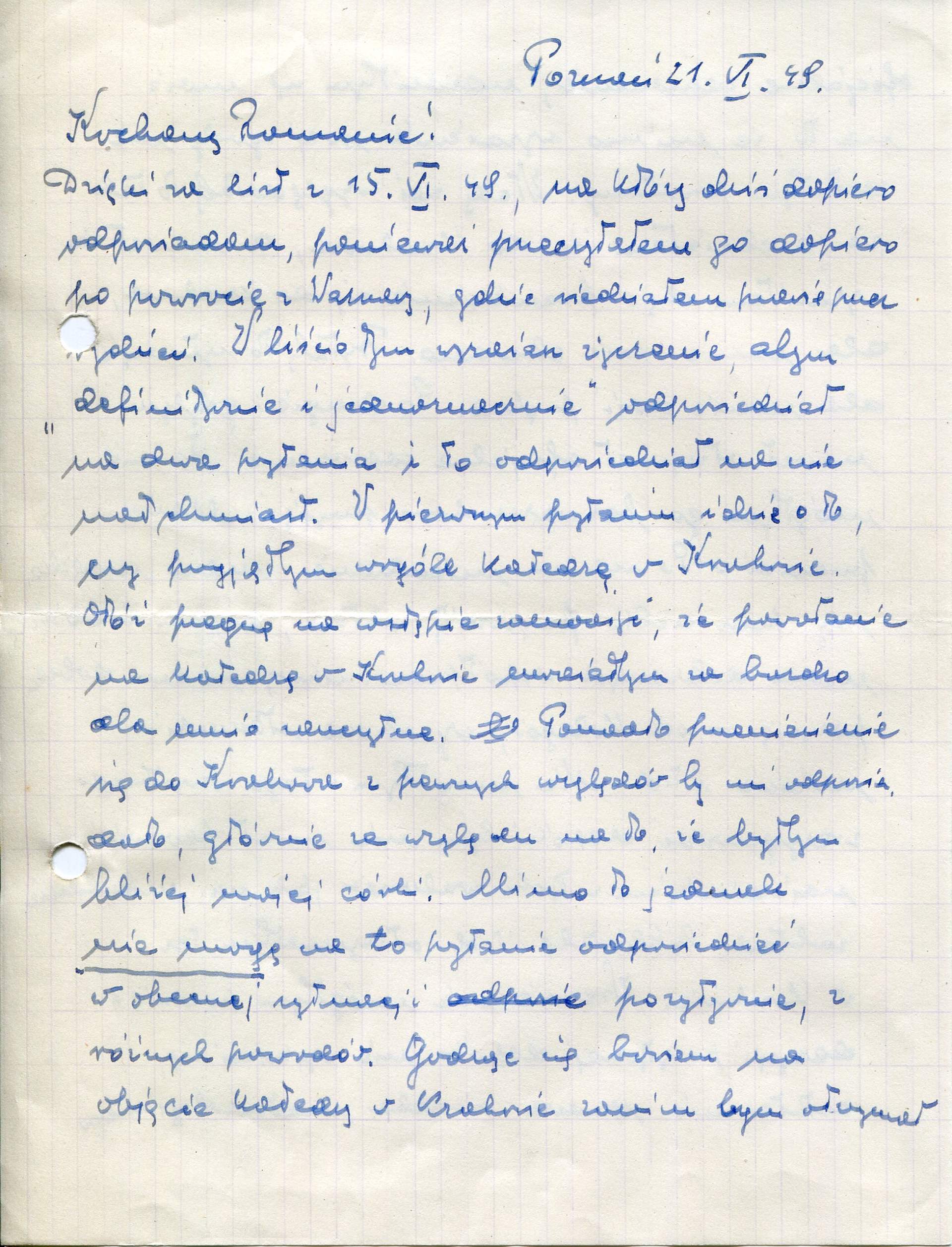 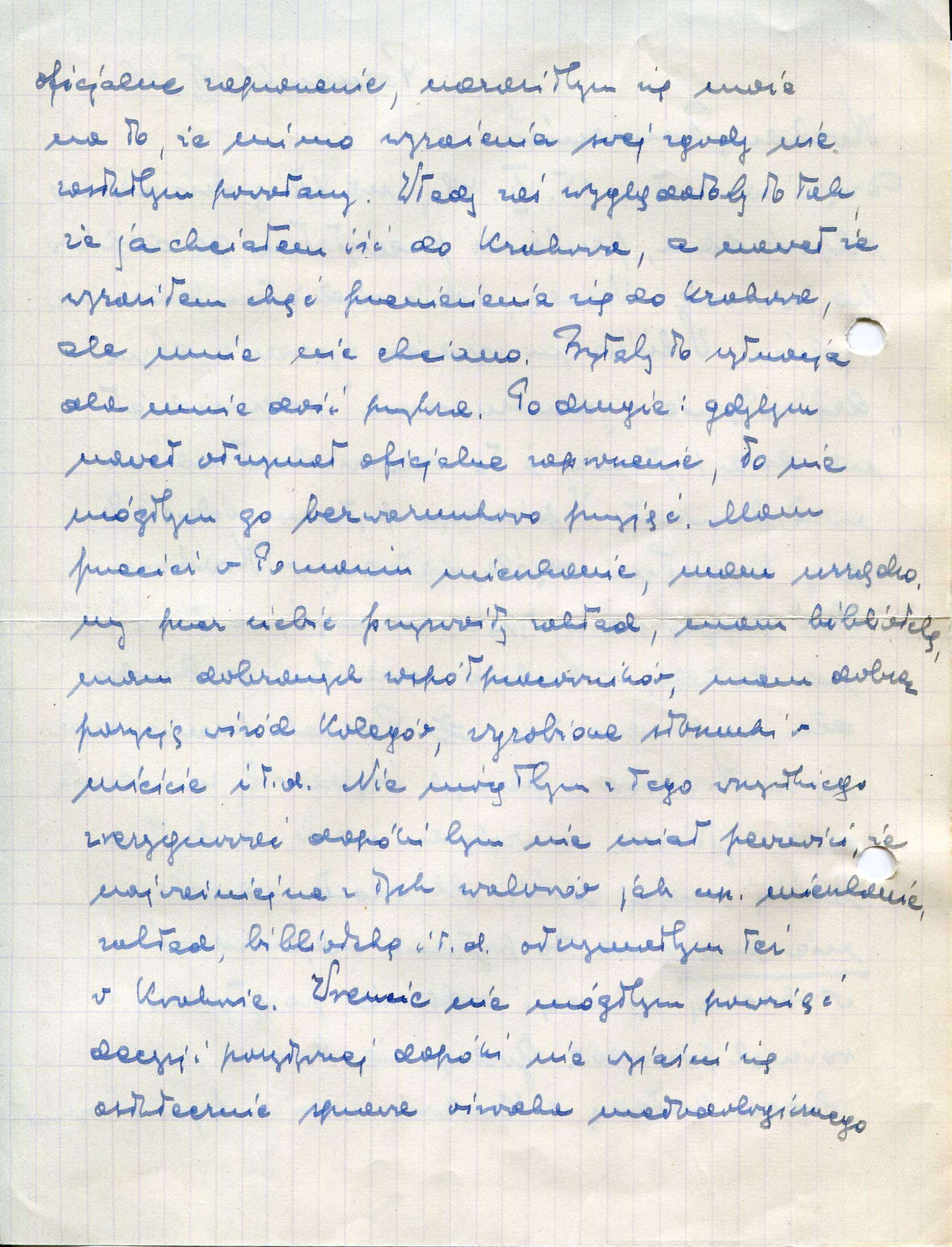 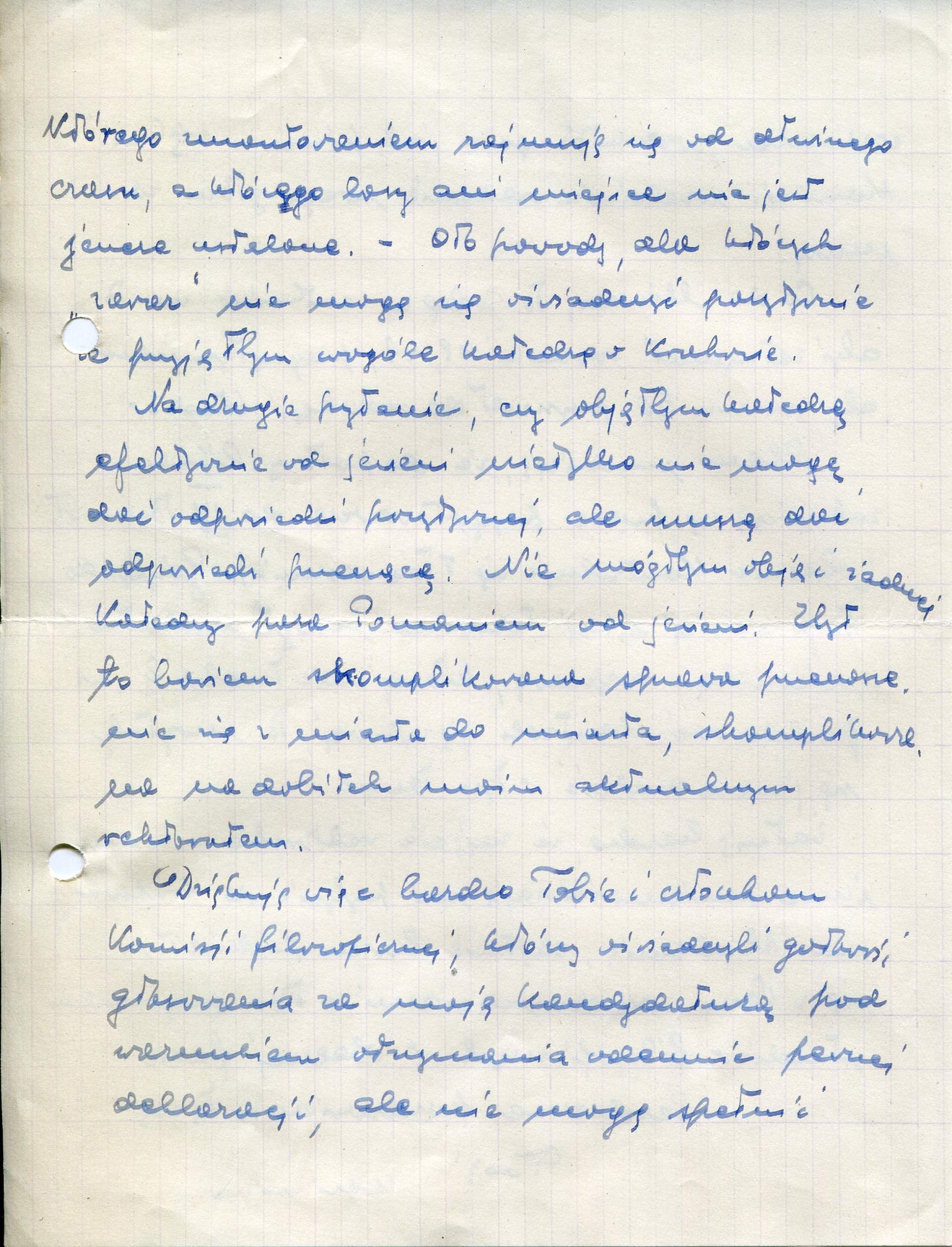 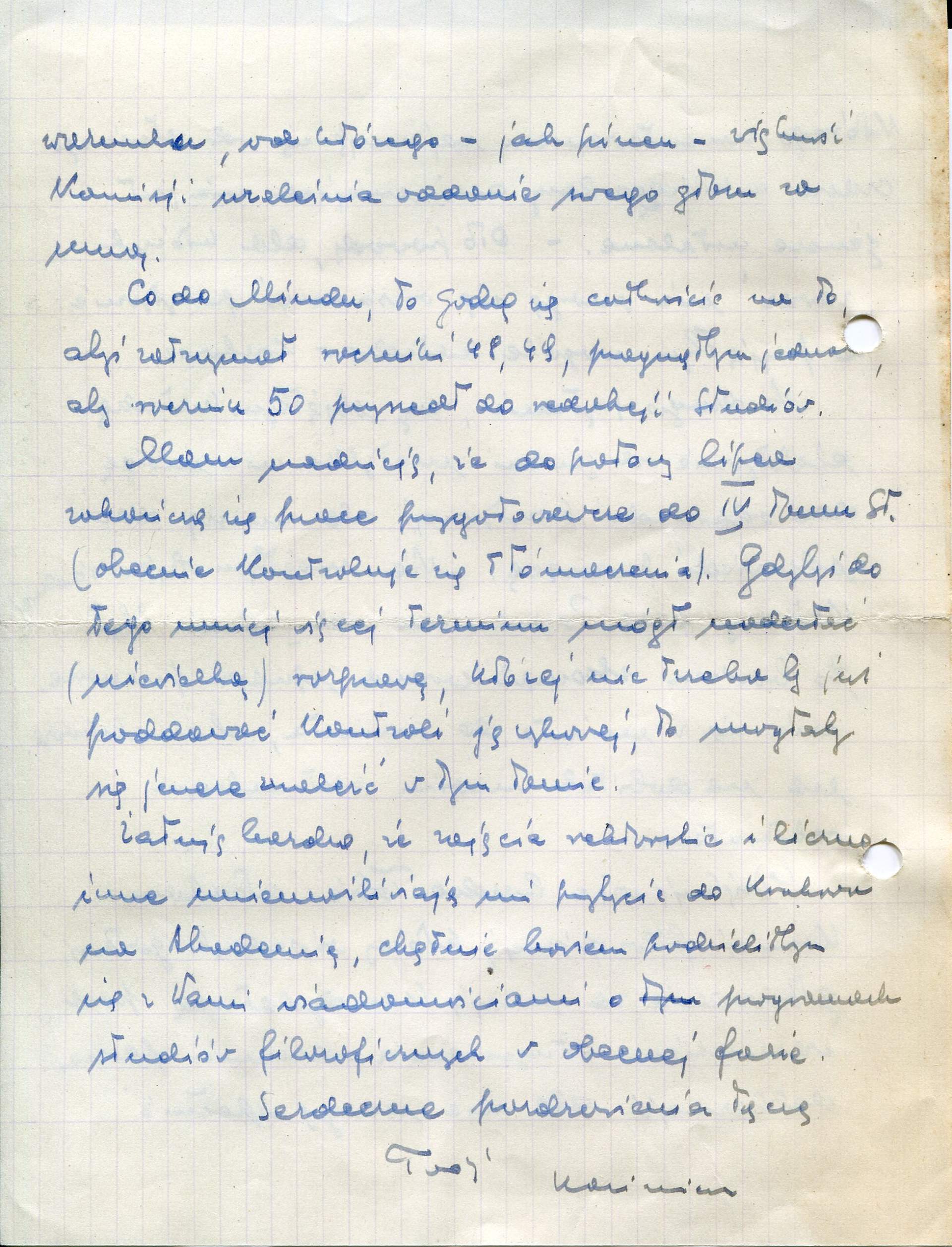 Thanks for your list of 15/6/49, which I’m answering only today, because I read it only after returning from Warsaw, where I sat for nearly a week. In this letter you express your wish that I ‘definitively and unequivocally’ answer two questions and answer them immediately. The first question is whether I would accept the chair in Cracow at all. Well, I’d like to highlight, first of all, that I’d consider appointment to the Chair in Cracow a great honour. Moreover, moving to Cracow would suit me for certain reasons, mostly because I’d be closer to my daughter. Notwithstanding, I can’t give a positive answer to the question in the present situation, for various reasons. Agreeing to accept the chair in Cracow before receiving an official invitation might expose me to the risk that, despite having expressed my agreement, I wouldn’t be appointed. Then it would look as if I wanted to go to Cracow, and even as if I had expressed my desire to move to Cracow, but that I was not wanted there. That situation would be quite regrettable for me. Secondly, even if I were to receive an official invitation, I wouldn’t be able to accept it unconditionally. After all, I’ve got an apartment in Poznań, I’ve got a decent facility[O1]  I arranged myself, I’ve got selected co-workers, I’m in good standing among my colleagues, I have well-developed relationships in the city, etc. I wouldn’t be able to give up all of this until I was sure that I’d also get the most important of these advantages, e.g. apartment, facility[O2] , library, etc., in Cracow. Finally, I could not make a positive decision as long as the recent methodological matter of XXX, the setup of which I’ve been occupied with for a long time, has not been clarified, and whose fate and place has not yet been established. ‒ These, then, are the reasons why I cannot say positively whether I would accept the chair in Cracow at all.

As for the second question, i.e. whether I would accept the chair effective as of autumn, not only can I not give a positive answer, but I must give a negative one. I could not accept any chair other than in Poznań as of this autumn. In fact, relocating from one city to another is too complicated a matter, and complicated all the more by my current status as rector.

Thus I extend great thanks to you and to the members of the Philosophical Committee who declared their readiness to vote for my candidature on the condition of receiving a certain declaration from me, but I cannot fulfil that condition, on which – as you say – the vote of the majority of the Committee for me depends.

As for Mind, I agree completely to your holding onto the ’48 and ’49 volumes; however, I would like the ’50 volume to be sent to the editorial board of Studies.

I’m hoping that they will complete the preparatory work for Volume IV of St. (at present the translation is under review) by the middle of July. If, more or less by that deadline, you could send a (short) paper which wouldn’t have to be submitted for linguistic review, a place could be found for it in this volume.

I regret very much that my obligations as rector as well as numerous others prevent me from coming to Cracow to the Academy. Indeed, I’d be glad to share some information with all of you concerning the present form of the activities of philosophical studies.

I attach cordial greetings,
Your Kazimierz

Application for the appointment as professor written 31.05.1932