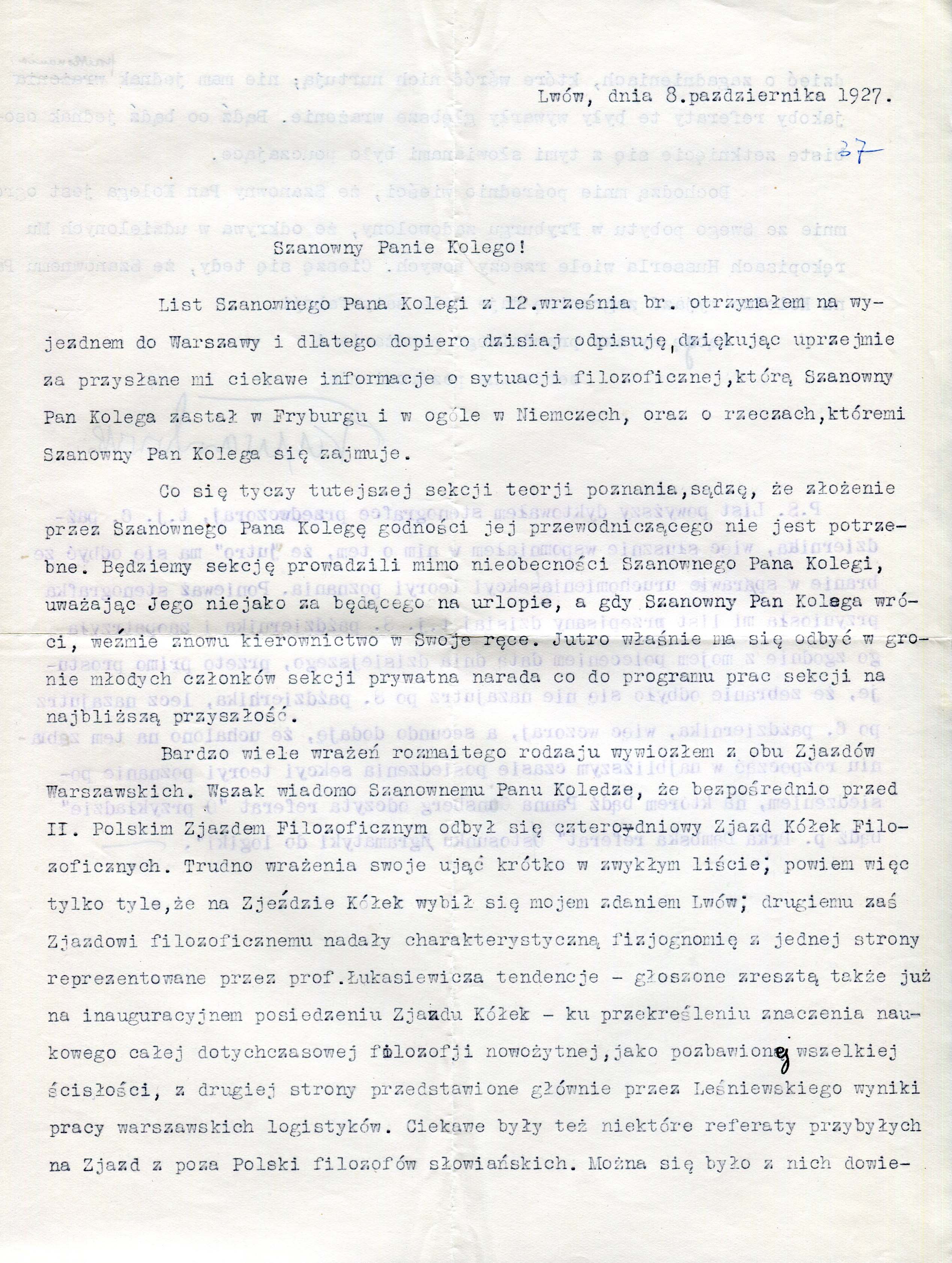 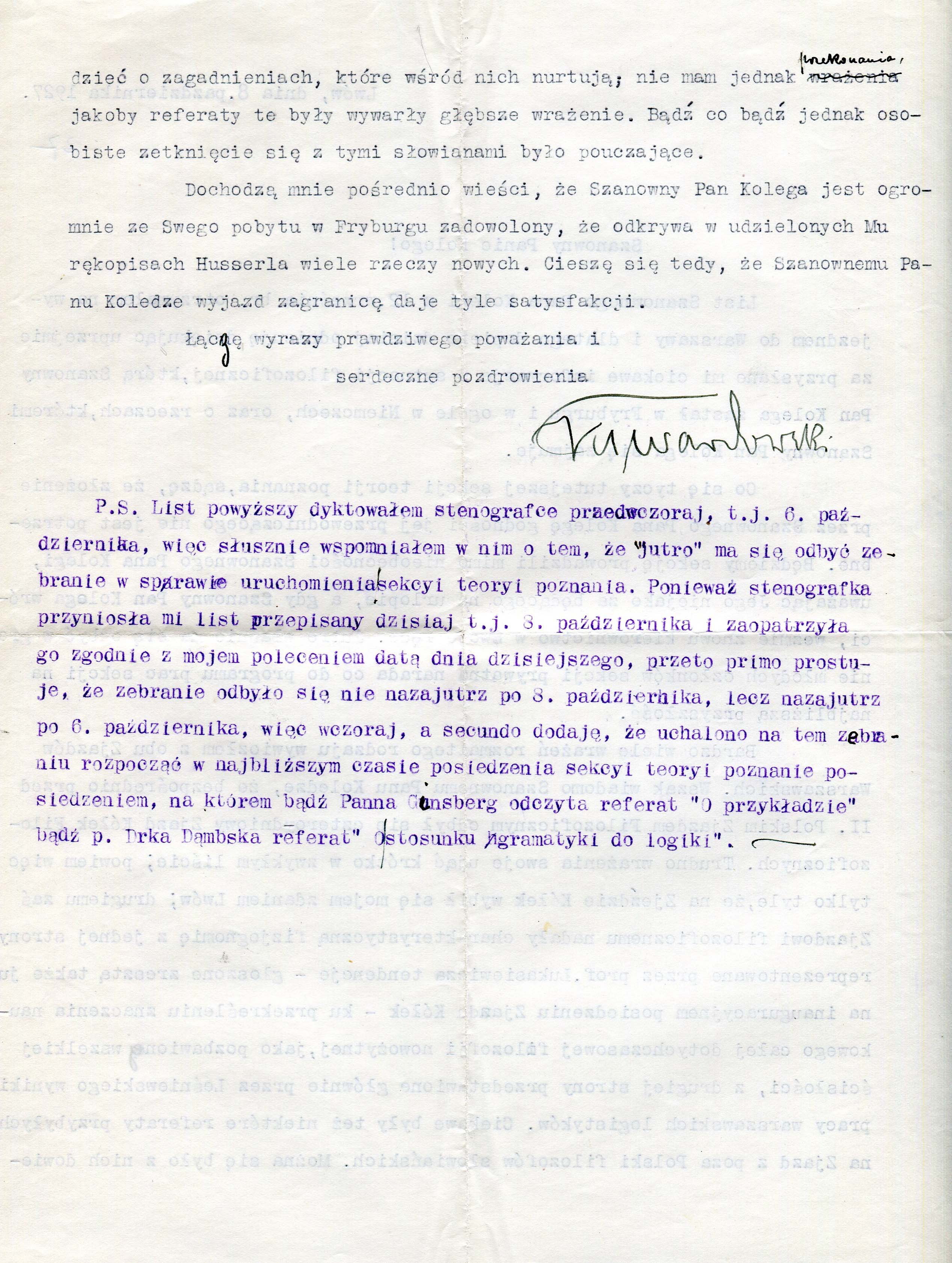 I received your letter of 12 September of this year while on a trip[O1]  to Warsaw, and thus am writing back only today to thank you kindly for the interesting information you sent about the philosophical situation you’ve found in Freiburg and in Germany in general, as well as about the things you’ve been occupied with.

As for the local section of the theory of cognition, I don’t think submission of your resignation from the chairmanship is necessary. We’ll continue to run the section despite your absence, considering you to be on leave, and when you return, you’ll again take the reins into your own hands. Actually, tomorrow, a private council is to be held within the group of the young members of the section concerning its work programme for the nearest future.

I came away from both Warsaw Congresses with many assorted impressions. You’re no doubt aware that the four-day Congress of Philosophical Circles was held immediately prior to the Second Polish Philosophical Congress. It’s difficult to express these impressions briefly in an ordinary letter; thus I’ll just say that at the Congress of Circles, in my opinion, Lviv prevailed, whereas the second Philosophical Congress was given its characteristic physiognomy, on one hand by the tendencies, represented by Prof. Łukasiewicz[O2]  – which were also proclaimed at the inaugural meeting of the Congress of Circles – towards the elimination of the academic significance of all contemporary philosophy to date as being devoid of all rigour, on the other hand by the results, presented mainly by Leśniewski[O3] , of the work of the Warsaw logisticians. Also interesting were some papers from Slavic philosophers who came to the Congress from outside Poland, which made it possible to learn about the issues which concern them; I’m not convinced, however, that these papers made any deeper impression. Be that as it may, personal contact with these Slavs was instructive.

News reaches me indirectly that you’re enormously satisfied with your stay in Freiburg, and that you’ve discovered many new things in those manuscripts of Husserl that have been shared with you. I’m happy, then, that your trip abroad is affording you so much satisfaction.

[PS] I dictated the above letter to the stenographer the day before yesterday, i.e. 6 October, and thus correctly mentioned therein that the meeting concerning the mobilisation of the section of the theory of cognition was to be held ‘tomorrow’. Because the stenographer brought me the transcribed letter today, i.e. 8 October, and gave it, according to my instructions, today’s date, I wish primo [firstly] to clarify that the meeting took place not on the day after 8 October, but on the day after 6 October, i.e. yesterday, and secundo [secondly] to add that at this meeting, it was resolved [O4] that in the nearest future meetings of the section of cognitive theory will begin with a meeting at which Ms Ginsberg [O5] will read her paper ‘On examples’ or Dr Dąmbska the paper ‘On the relationship of grammar to logic’.

Application for the appointment as professor written 11.02.1931