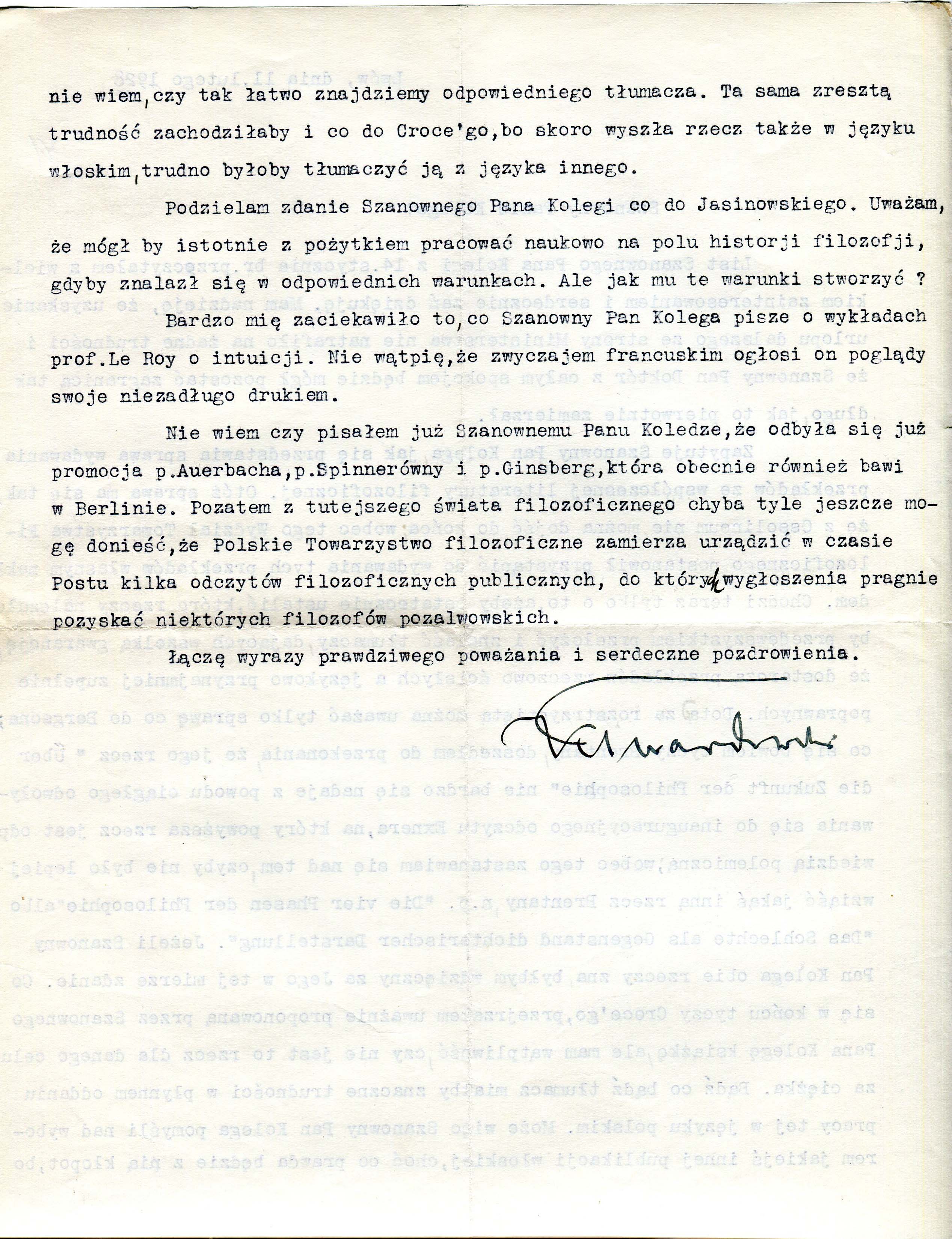 I read your letter of 14 January of this year, for which I cordially thank you, with great interest. I hope that there was no difficulty in obtaining additional leave from the Ministry, and that you’ll be able to stay abroad with complete peace of mind for as long as you originally intended.

You ask where the issue of publishing translations from contemporary philosophical literature stands. Well, the matter is such that it’s not possible to conclude anything with Ossolineum; therefore, the Department of the Philosophical Society has decided to proceed on its own with the publication of these translations. The only question now is to ultimately determine which things should be translated first of all, and to find translators who offer every guarantee of providing substantively accurate, and, in linguistic terms, absolutely correct translations. As yet, only the case of Bergson[O1]  can be considered settled; as for Brentano[O2] , I’ve arrived at the conviction that his thing Über die Zukunft der Philosophie [On the future of philosophy] is not very suitable due to the continual references to Exner[O3] ’s inaugural lecture, to which it is a polemical response; accordingly, I wonder if it wouldn’t be better to take some other thing of Brentano’s, e.g. Die vier Phasen der Philosophie [The four phases of philosophy] or Das Schlechte als Gegenstand dichterischer Darstellung [Evil as an object of poetic representation]. If you’re familiar with both of these things, I’d be grateful for your opinion in this respect. Finally, concerning Croce[O4] , I carefully looked over the book you suggested, but I have my doubts as to whether this isn’t too ponderous a thing for the purpose. Be that as it may, the translator would have considerable difficulty in rendering this paper fluently in Polish. Maybe, then, you’ll think about choosing some other Italian publication, even if, admittedly, it’ll involve problems, since I don’t know whether it’ll be so easy to find a suitable translator. The same difficulty would crop up as in the case of Croce, since, if such a thing had come out in Italian as well, it’d be difficult to translate it from another language.

I share your opinion concerning Jasinowski[O5] . I believe that he could, indeed, produce useful academic work in the field of the history of philosophy, were he to find himself in suitable conditions. But how to create these conditions for him?

I was very intrigued by what you wrote about Prof. Le Roy[O6] ’s lectures on intuition. I have no doubt that, in accordance with French custom, he’ll soon publish his views in printed form.

I don’t know whether I’ve written you already that the promotion of Mr Auerbach[O7] , Ms Spinnerowna [i.e. wife of Mr Spinner], [O8] and Ms Ginsberg [O9] (who’s already in Berlin as well) has already taken place. Apart from that, I can also tell you this much from the local philosophical world: the Polish philosophical Society intends to organise several public philosophical lectures during Lent, for which it wishes to recruit some philosophers outside of Lviv.