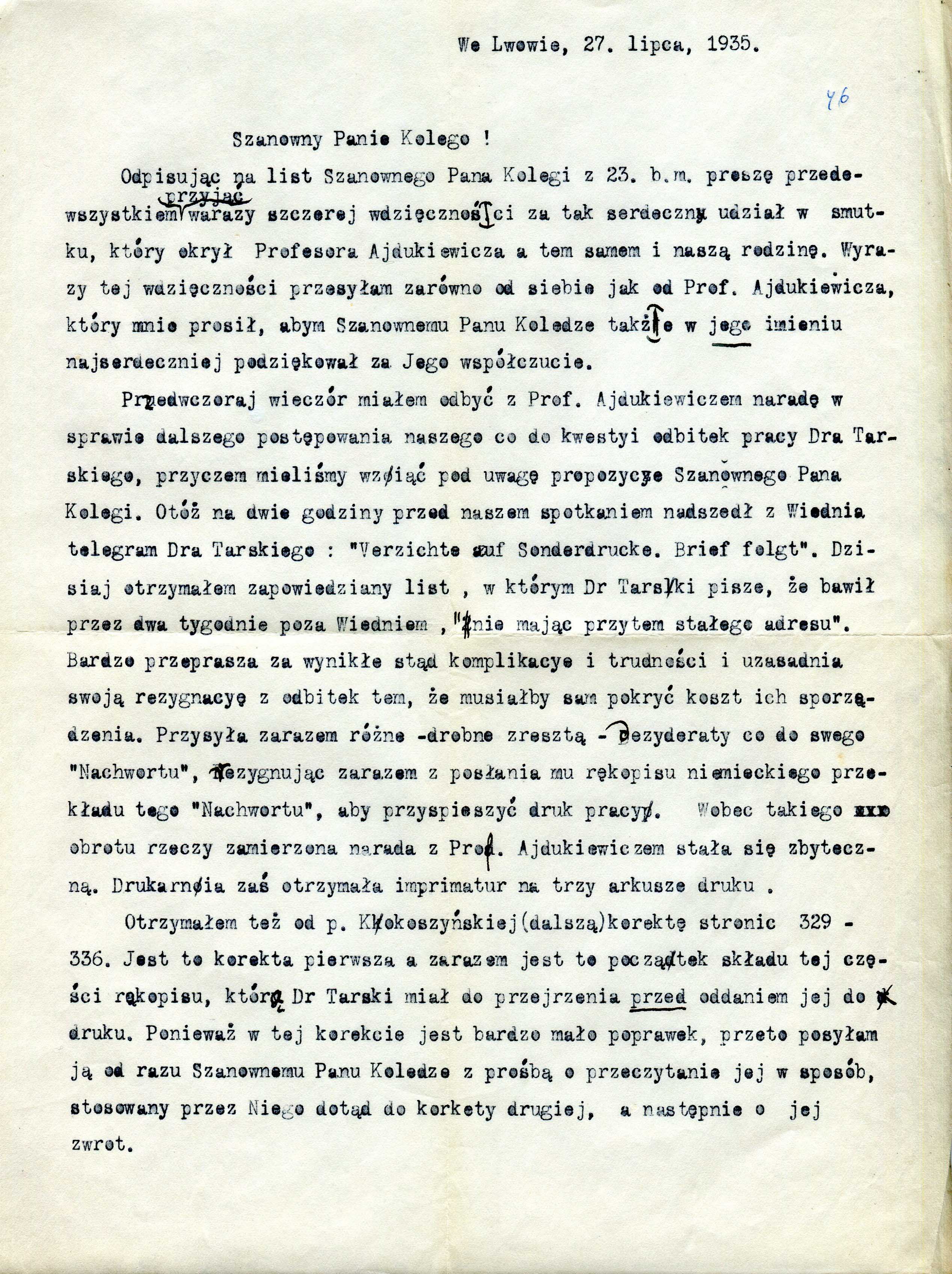 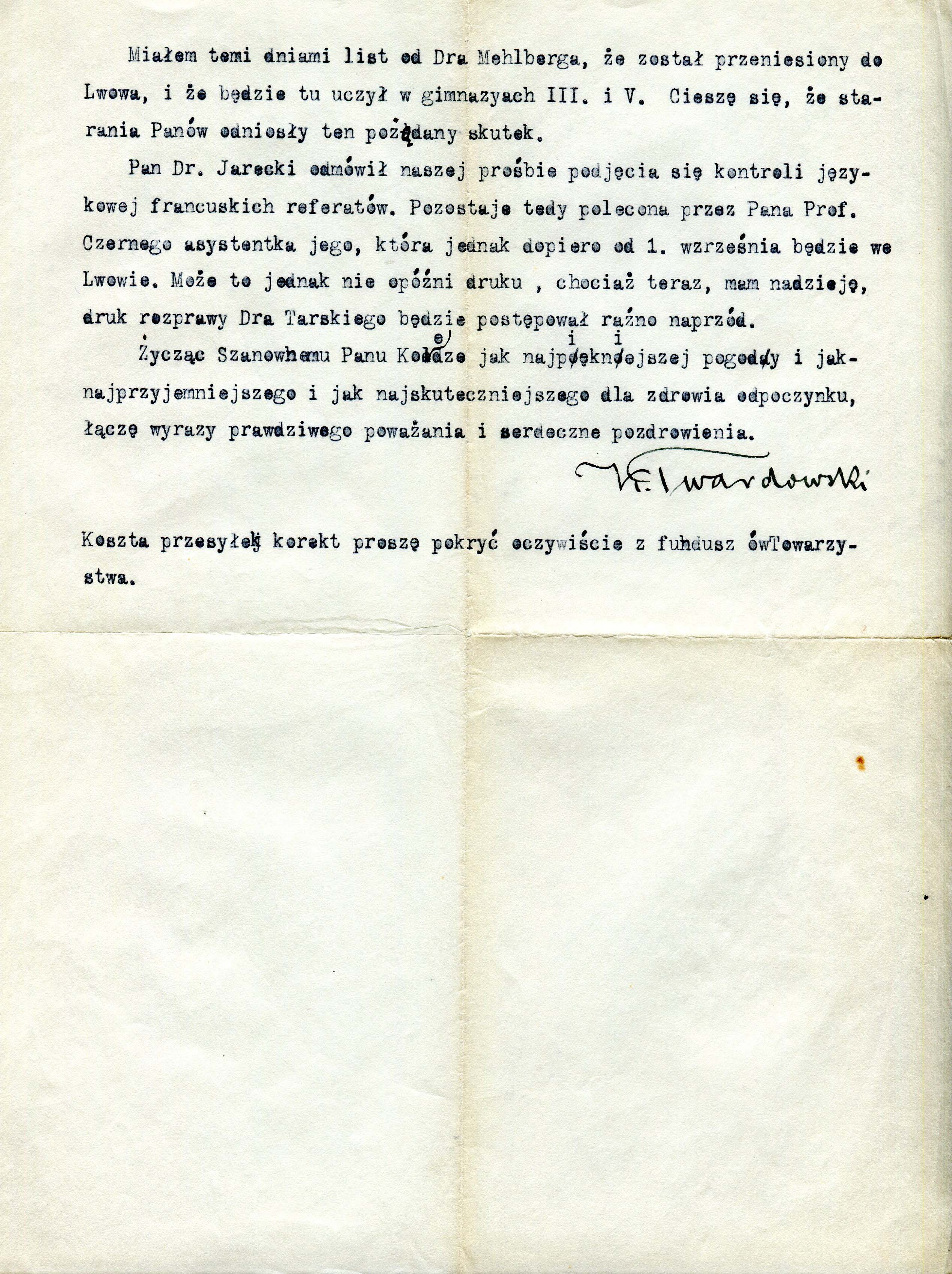 In replying to your letter of the 23rd of this month, I ask you first of all to accept my expressions of sincere gratitude for cordially sharing the sorrow into which Professor Ajdukiewicz [O1] was plunged along with our family. I’m sending expressions of this gratitude on my own behalf as well as that of Prof. Ajdukiewicz, who asked me to thank you most cordially for your sympathy in his name.

The evening of the day before yesterday, I was supposed to confer with Prof. Ajdukiewicz regarding our future proceedings as to the question of offprints of Dr Tarski[O2] ’s paper, during which we were to consider your proposals. Well, two hours before our meeting, a telegram from Dr Tarski arrived from Vienna: ‘Verzichte auf Sonderdrucke. Brief folgt’ [German: Waiver of offprints. Letter to follow.] Today I received the promised letter, in which Dr Tarski writes that he’d spent two weeks away from Vienna, ‘and therefore had no fixed address’. He apologises profusely for the resulting complications and difficulties and justifies his giving up the offprints with the observation that he’d have to cover the cost of preparing them himself. At the same time, he sent various – at any rate, minor – desiderata concerning his Nachwort [German: afterword], while waiving the sending of the manuscript of the German translation of this Nachwort, so as to expedite printing of the paper. Given this turn of events, the intended conference with Prof. Ajdukiewicz became superfluous, while the printing house received the imprimatur [i.e. approval] for the printing of three signatures.

I also received from Ms Kokoszyńska [O3] (additional) proofs of pages 329‒336. These are the first proofs and at the same time the beginning of the typesetting of the part of the manuscript that Dr Tarski was supposed to review before sending it to be printed. Because there are very few corrections in these proofs, I’m sending them to you with a request to read them through, using the method you’ve applied heretofore to the second set of proofs, and subsequently to return them.

Lately I had a letter from Dr Mehlberg [O4] informing me that he’s been transferred to Lviv, and that he’ll be teaching here in the third and fifth middle schools. I’m glad that your efforts have led to this desirable result.

Dr Jarecki [O5] has refused our request to undertake linguistic reviews of French papers. Thus there remains Prof. Czerny[O6] ’s assistant, whom Czerny recommended but who won’t be in Lviv until 1 September. Perhaps, though, this won’t hold up printing ‒ though now, I hope, the printing of Dr Tarski’s dissertation will proceed briskly.

Wishing you the most beautiful weather and the most pleasant (and effective in terms of health) rest, I enclose expressions of genuine esteem and cordial greetings.

Of course, please cover the costs of sending the proofs from Society funds.

Letter to the Committee of the Library of Classics of Philosophy written 09.03.1954