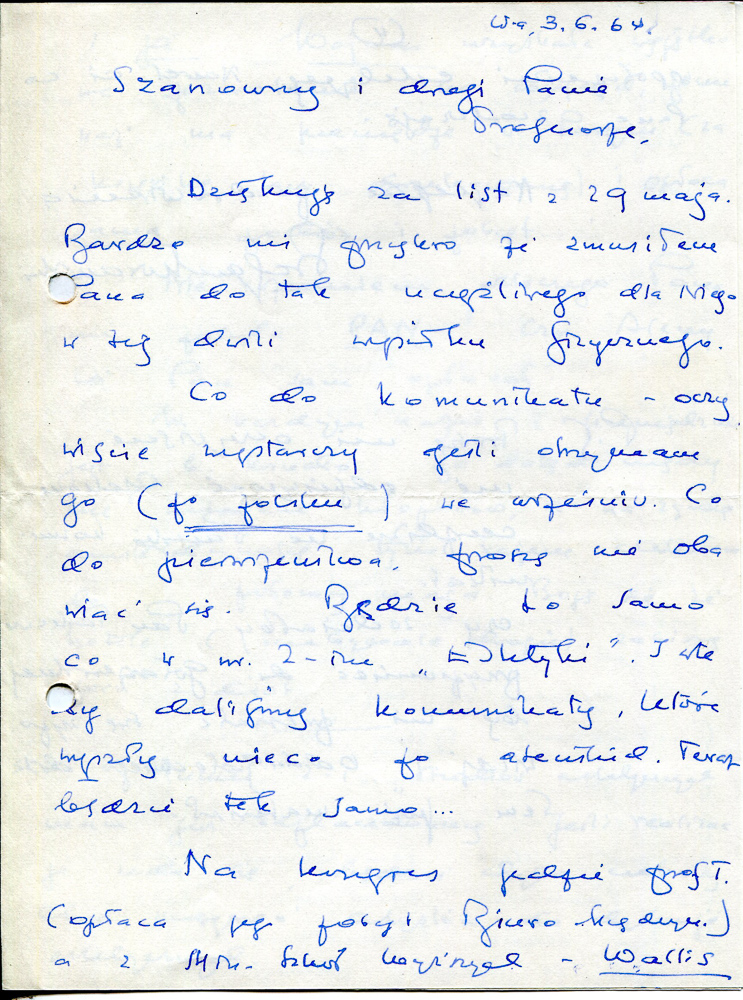 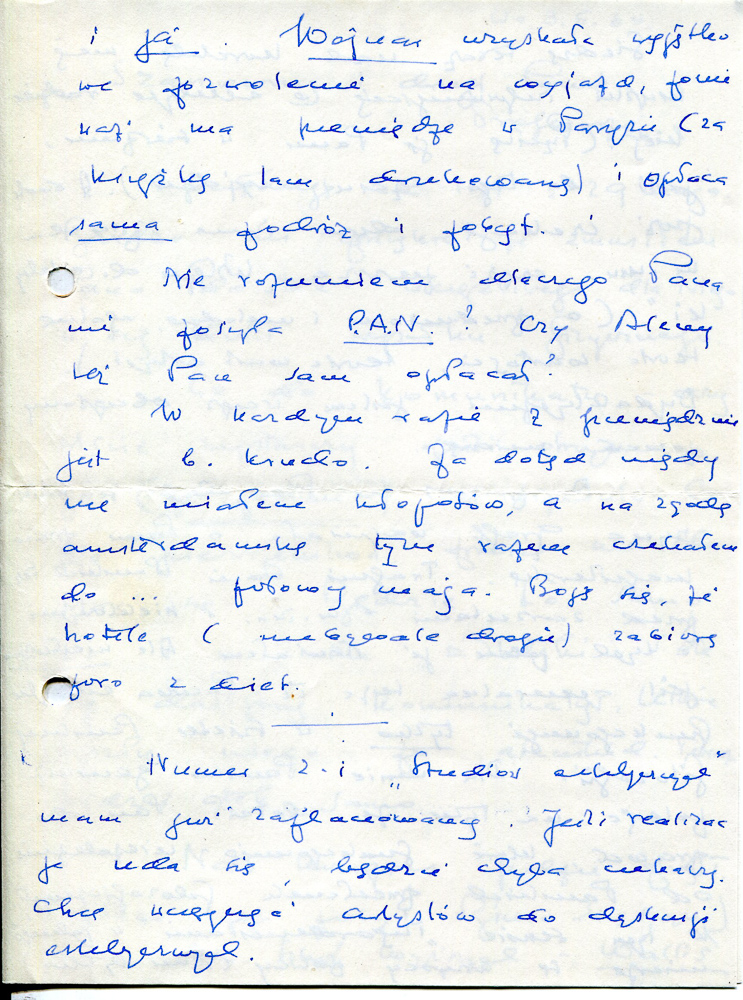 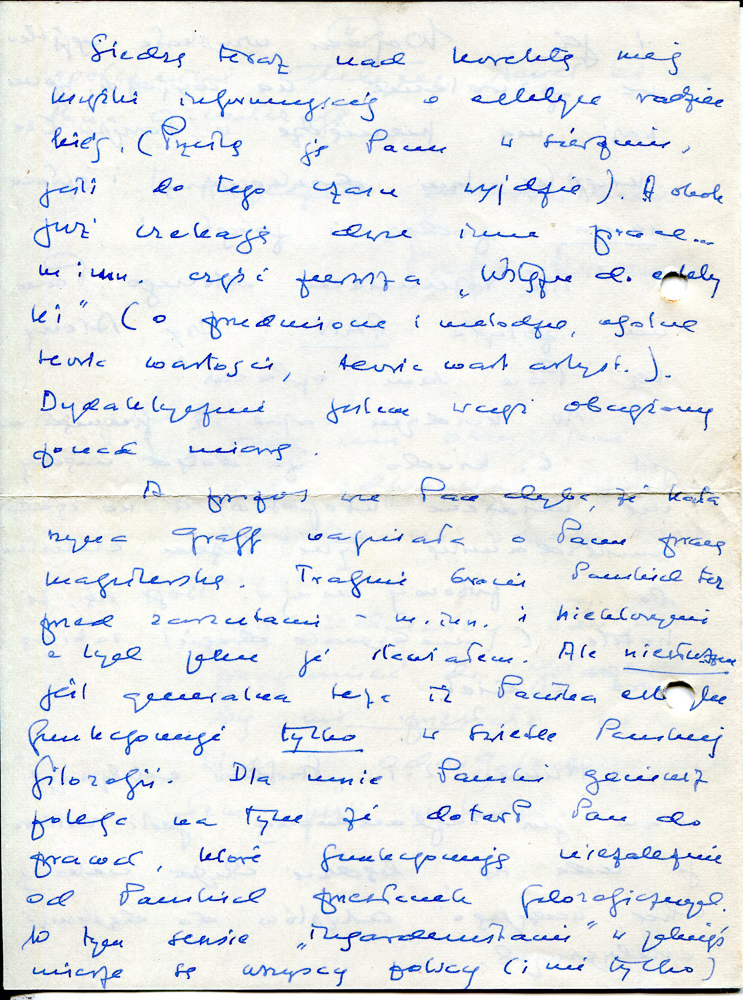 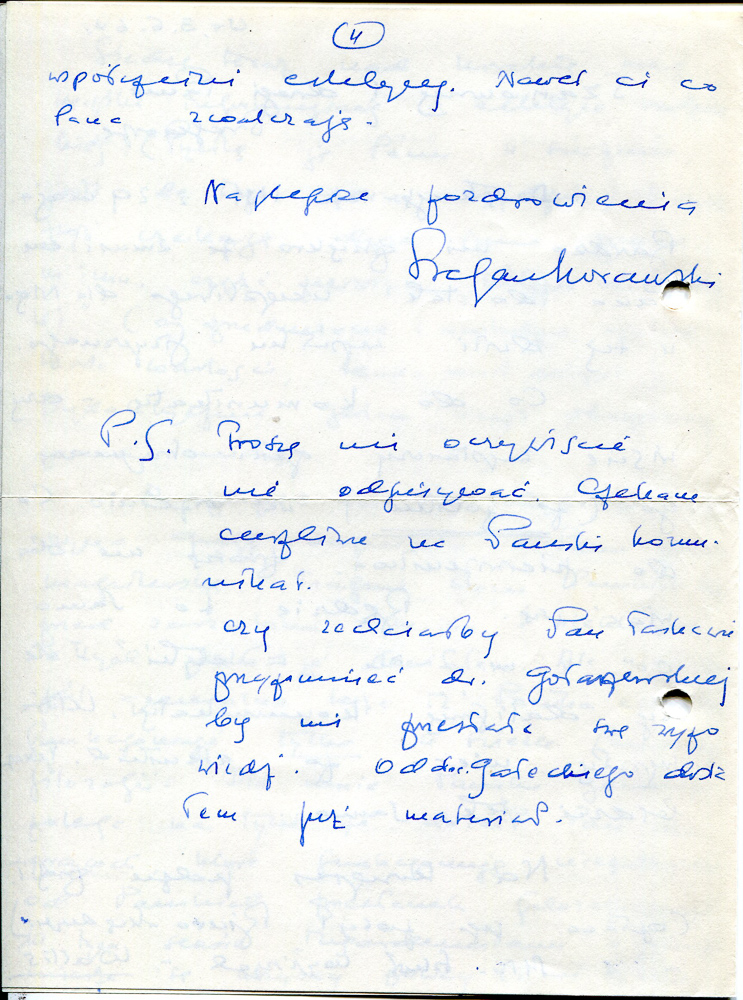 n        n   Thank you for your letter from May 29. I am very sorry that I forced you to make physical effort which is so difficult for you right now.
n        n   As for the announcement – of course, it will be enough if I receive it (in Polish) in September. As for priority, please do not worry. It will be the same as in the 2nd Volume of “Aesthetics”. Back then we have also printed the announcements a bit after Athens. It will be the same this time…
|     n        n   Prof. T. is going to the congress (the International Office is funding his stay) and from the Ministry of Higher Education – Wallis and I. Wojnar has obtained a unique travel permit, because she has money in Paris (for a book she printed there) and is paying for the trip and stay herself.
n        n   I do not understand why you are being sent to me by P.A.S. Did you also pay for XXX yourself?
n        n   In any case, money is very scarce. I have never had trouble so far, and this time I waited for an approval from Amsterdam until… mid-May. I am afraid that hotels (extremely expensive) will take up a lot of the funds.
n        n   I have already been planning for volume 2 of “Aesthetic Studies”. If the project is successful, it should be interesting. I would like to involve artists in aesthetic discussions.
n        n   I am now working on making corrections to my book on Soviet aesthetics. (I will send it to you in August if it comes out by then). And to two other works are awaiting… including part one of the Introduction to Aesthetics (on object and method, general theories of values, theories of artistic values). Didactically, I am still overloaded.
n        n   By the way, you probably know that Katarzyna Graff wrote her Master’s thesis on you. She also skillfully defends your claims against criticism – including that I would have been inclined to agree with. But wrongly if the general thesis says that your aesthetics works only in the light of your philosophy. For me, your genius consists in you having reached the truths that function independently of your philosophical premises. In this sense, all Polish (and not only) contemporary aesthetics are “ingardenists” to some extent. Even those who argue with you.

P.S. Please do not reply to me, of course. I will be waiting patiently for your announcement.

Letter to the Committee of the Library of Classics of Philosophy written 03.06.1955