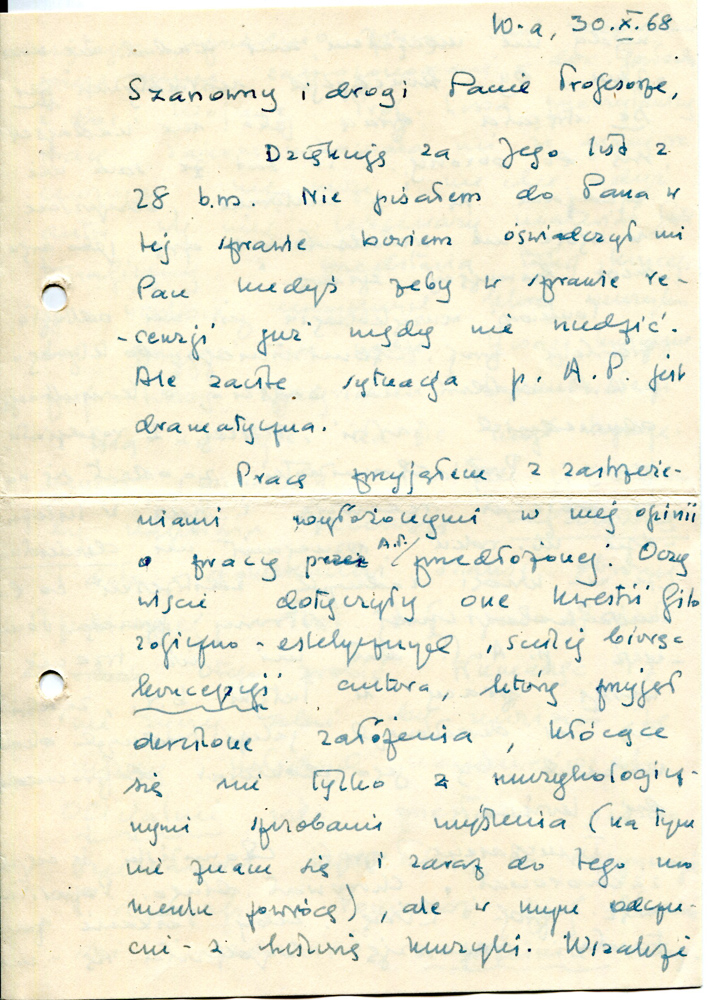 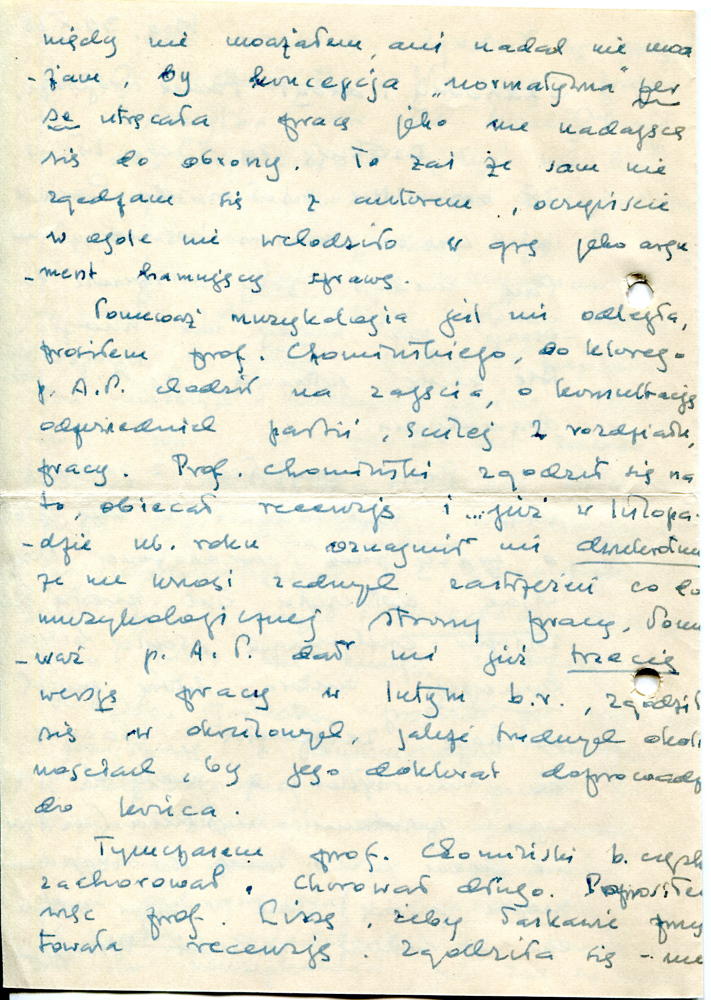 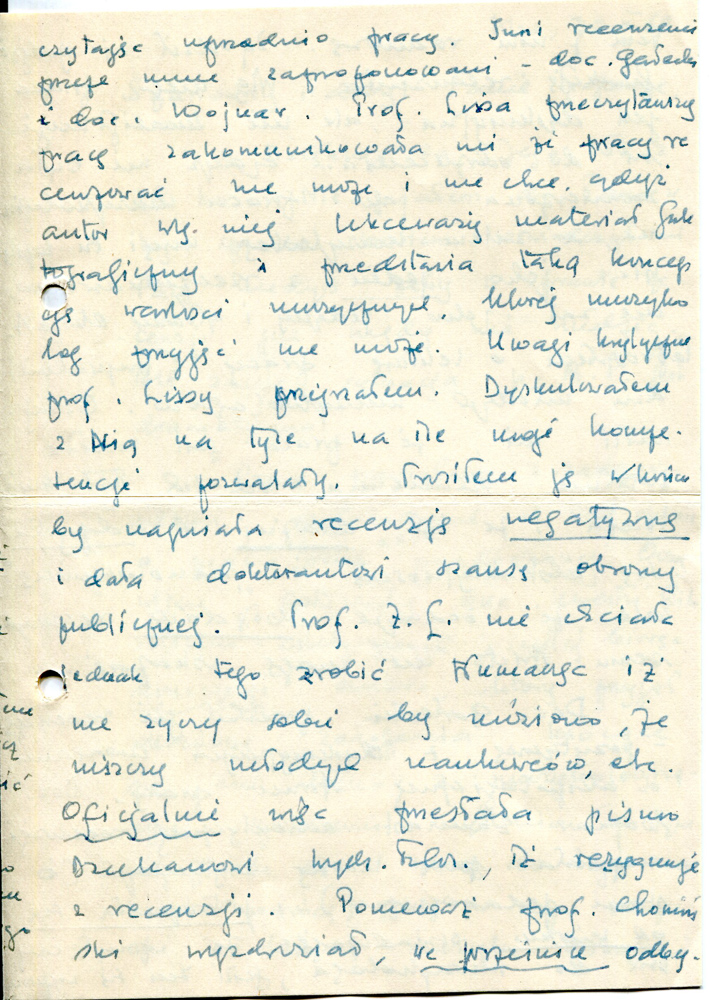 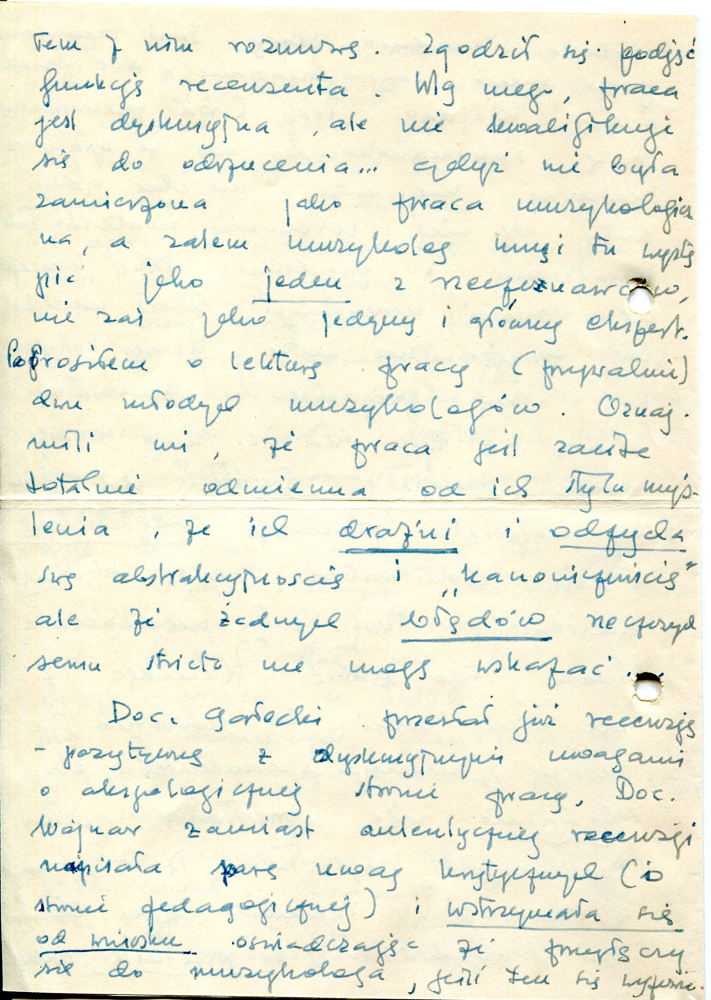 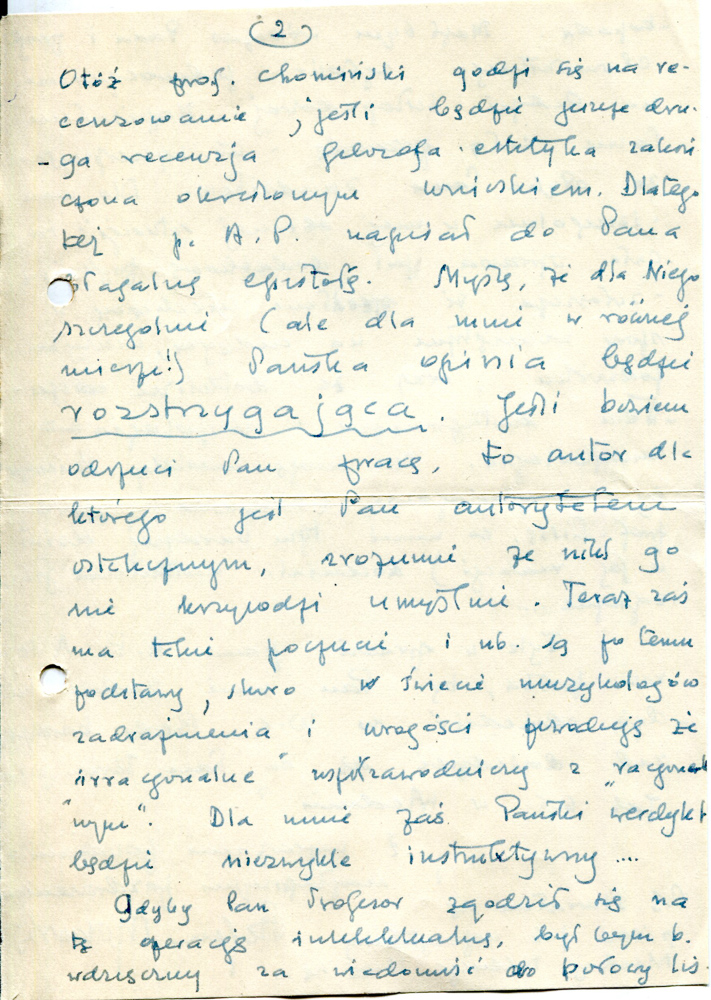 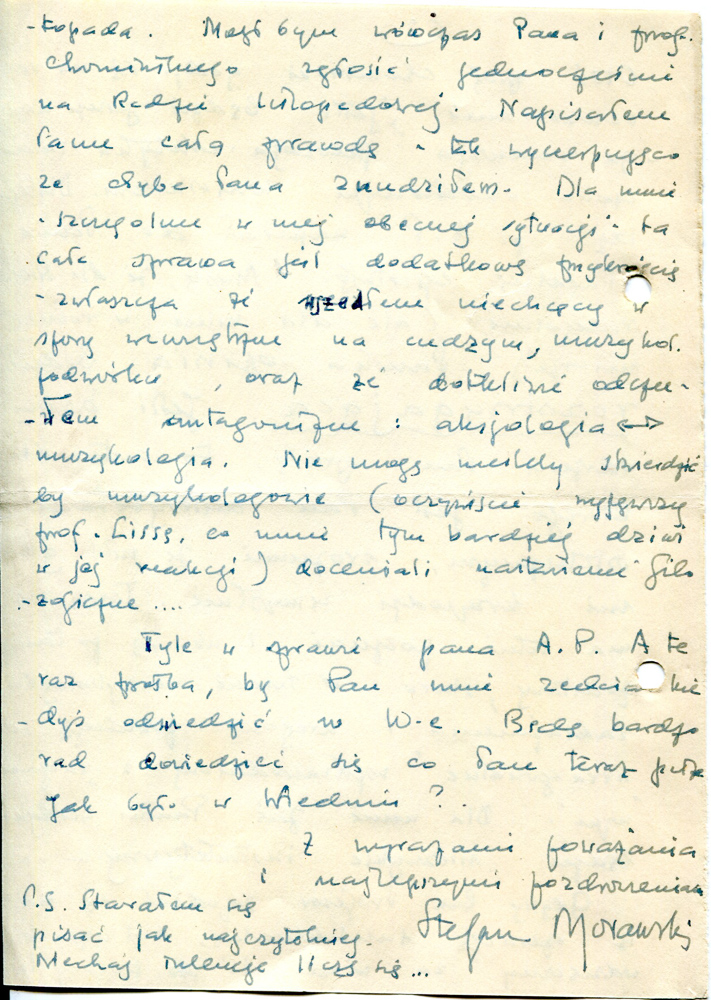 n             Thank you for your letter from 10/28. I did not write to you about this matter because you once told me that I should not bother you with the review anymore. But A.P.’s situation is indeed dramatic.
n             I accepted the dissertation with some reservations I set out in my opinion on A.P.’s work. Of course, they concerned philosophical and aesthetic issues, more specifically the author’s concept, which adopted certain assumptions, not only conflicting with musicological ways of thinking (I am not proficient in this and will return to that moment later), but – in my opinion – with the history of music. After all, I have never believed, nor do I right now, that the “normative” concept per se makes a work unsuitable for defense. And the fact that I do not agree with the author personally, of course, was not an option at all as an argument against it.
n             As I am not very familiar with musicology, I asked prof. Chomiński, whose classes A.P. attended, for consultation of relevant parts, more specifically chapter 2 of the dissertation. Professor Chomiński agreed to this, promised a review and … already in November of last year he told me twice that he had no objections to the musicological side of the work. As Mr. A.P. gave me the third version of his thesis in February this year, he agreed to complete his doctorate under these difficult circumstances.
n             Meanwhile, prof. Chomiński fell very sick. He was ill for a long time. So I asked prof. Lissa to kindly prepare a review. She agreed – not reading the work beforehand. Other reviewers proposed by me were assoc. prof. Gałecki and assoc. prof. Wojnar. Professor Lissa, having read the thesis, told me that she could not review the work and did not want to do so. Because in her opinion the author disregards factual material and presents a concept of musical values ​​that cannot be accepted by a musicologist. I looked over the critical remarks made by prof. Lissa. I debated with her as much as my competences allowed. Finally, I asked her to write a negative review and give the doctoral student a chance to defend himself. However, professor Ż.L. did not want to do it, explaining that it could give birth to rumors that she destroys young scientists, etc. So she sent an official letter to the Dean of the Faculty of Philosophy, saying that she is resigning from writing the review. Since prof. Chomiński had recovered, I had a conversation with him in September. He agreed to become a reviewer. According to him, the work is disputable, but it does not qualify for rejection … because it was not intended as a musicological work, and therefore a musicologist must appear here as one of the experts, and not as the only and main one. I (privately) asked two young musicologists to read the work. They told me that the work was completely different from their way of thinking, that it irritates and repulses them with its abstractness and “canonicality”, but that they cannot point out any factual errors.
n             Assoc. prof. Gałecki has already sent in a review – a positive one with some debatable comments about the axiological side of work. Assoc. prof. Wojnar, instead of an authentic review, wrote a few critical remarks (about the pedagogical side) and refrained from making a conclusion, declaring that she would join with the musicologist when they make their opinion known. So, prof. Chomiński agrees to writing the review, provided that there will be a second review by a philosopher dealing with aesthetics, which ends with a specific conclusion. Hence, A.P. he wrote a long plea to you. I think that especially for him (but for me as well!) your opinion will be decisive. If you reject his work, then the author, for whom you are an aesthetic authority, will understand that no one means any intentional harm to him. Now, however, he has such a sense and, for example, there are grounds for it, since in the world of musicologists irritation and hostility cause the “irrational” to compete with the “rational”. For me, in turn, your verdict will be highly instructive …
n             If Professor agreed to this intellectual operation, I would be very grateful for a reply by mid-November. I could then notify the Faculty Council simultaneously of both your and prof. Chomiński’s consent at its November meeting. I wrote you the whole truth – so exhaustively that I think I might have bored you. For me – especially in my current situation – this whole thing is all the more upsetting – especially since I accidentally entered into internal disputes in someone else’s, musicol. backyard, and that I felt severe antagonism: axiology ↔ musicology. Unfortunately, I cannot say that musicologists (of course, except for Prof. Lissa, which makes me even more surprised with her reaction) appreciate philosophical inspiration …
n             So much for Mr. A.P.’s case. And now a request that you visit me someday in Warsaw. I would be very happy to find out what you are working on right now. How was Vienna?

P.S. I tried to write as legibly as possible. Let those intentions count …