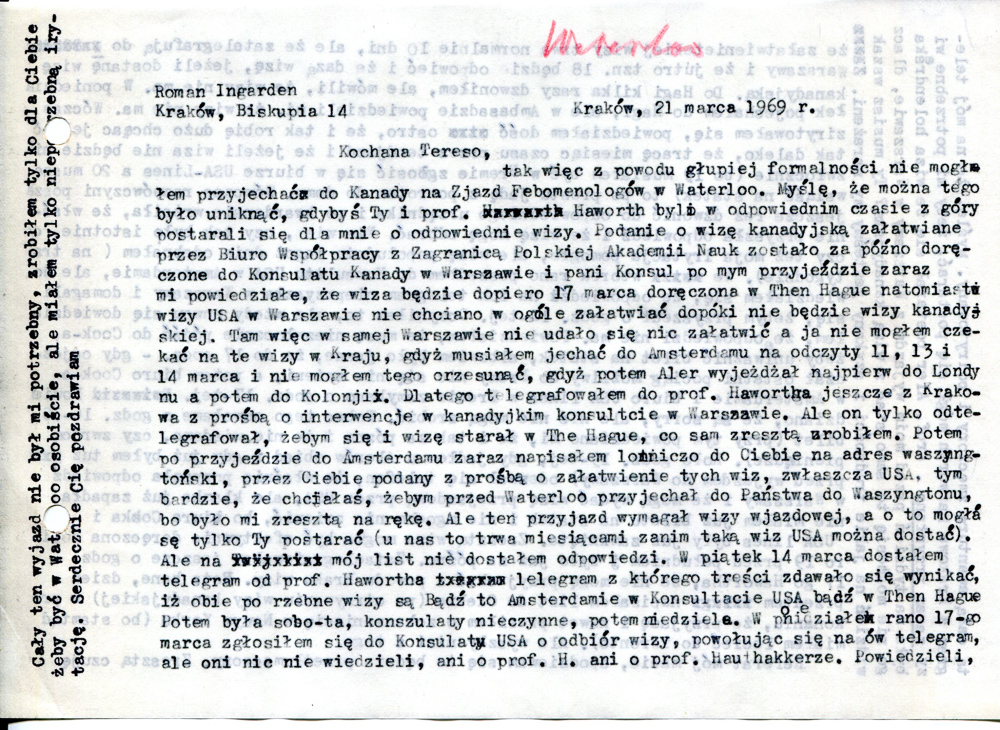 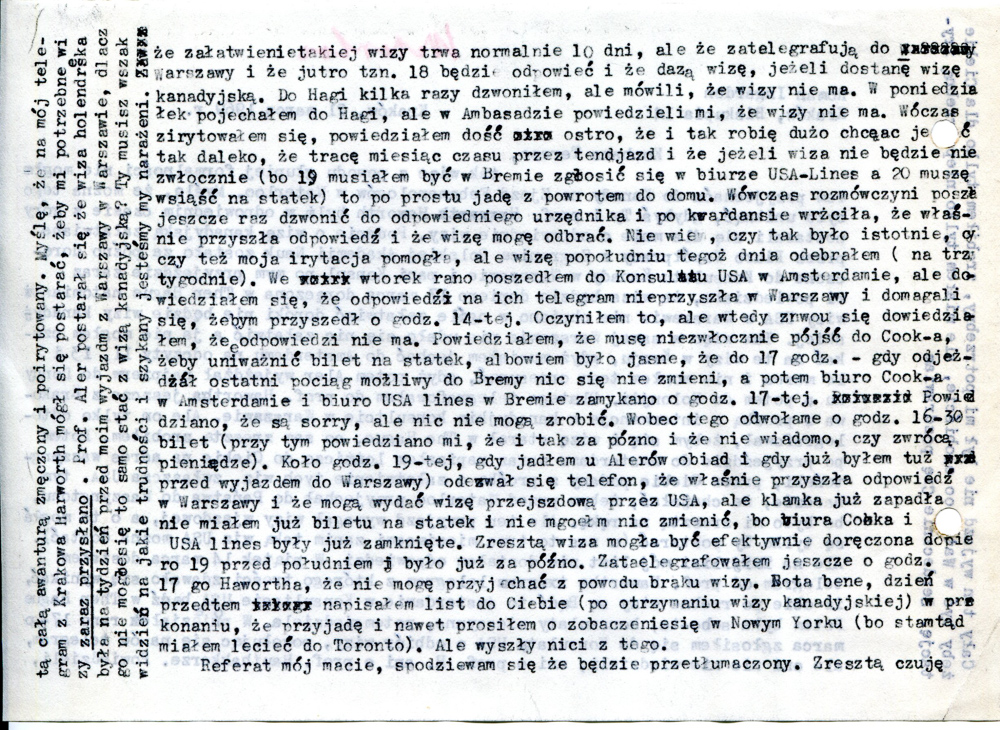 c          c          c          c         Dear Teresa,
c          c                                            due to a stupid formality I couldn’t come to Canada for the Fenomenologists’ Congress in Waterloo. I think it could have been avoided had you and prof. Haworth made the necessary arrangements for the right visas for me in advance. The application for the Canadian visa which was arranged by the Office of International Cooperation of the Polish Academy of Sciences was delivered too late to the Canadian Consulate in Warsaw, and upon my arrival I was informed by the Consul that the visa would not be delivered to Hague on March 17, while I was was denied the US visa in Warsaw until I could recieve the Canadian one. So all my efforts in Warsaw had failed, and I could not wait for these visas in the country, as I had to give lectures in Amsterdam on March 11, 13 and 14 and I could not postpone it, because Aler was leaving right after, first to London and then to Cologne. That is why I telegrammed prof. Haworth from Krakow with a request for an intervention in the Canadian Consulate in Warsaw. But he only telegrammed me back to say I should apply for a visa in Hague, which I did anyway. Then, after arriving in Amsterdam, I immediately wrote to you by air mail at your Washington address with a request to obtain these visas for me, especially the one for the USA, all the more since you wanted me to come visit you in Washington, which was convenient for me anyway. But this trip required an entry visa, and this could only be arranged by you (here it lasts months before you can get a US visa). But I did not get a reply to my letter. On Friday, March 14, I received a telegram from prof. Haworth’s, the content of which seemed to suggest that both visas were either the US Consulate in Amsterdam in or in Hague. Then it was Saturday and Sunday, and the Consulates were closed. On Monday morning, March 17, I reported to the US Consulate to collect my visa, citing this telegram, but they claimed to know nothing, neither about prof. H. nor about prof. Hauthakker.
c       They told me that it would normally take 10 days to get such a visa, but that they would telegraph to Warsaw and that they would answer the following day, , i.e. the 18th, and that they would give me a visa provided I got the Canadian one. I called Hague several times, but they said there was no visa. On Monday I went to Hague, but the Embassy told me there was no visa. Then I got annoyed, I said quite dryly that I had made more than enough effort travelling so far for it, that had already lost a month of my time because of this congress, and that if I could not get the visa immediately (because I had to be in Bremen on the 19th and get on a ship at the USA-Lines on the 20th) I was just going back home. Then the interlocutor went to call the appropriate clerk again and after fifteen minutes she came back and informed me that the answer had just arrived and that I could collect the visa. I do not know if this was the case or if my irritation helped it along, but I received the visa that afternoon (for three weeks). On Tuesday morning I went to the US Consulate in Amsterdam, but I found out that the reply to their telegram did not arrive from Warsaw and I was asked to come at 2 p.m. I did just that, but then I found out again that there was no answer.
c       I said that I had to immediately go to Cook to cancel my ticket because it was clear that by 5 p.m. – when the last train for Bremen was leaving – nothing was going to change, and Cook’s office in Amsterdam and the USA lines office in Bremen were closing at at 5 p.m. They said they were sorry but they couldn’t do anything. Therefore, cancelled my ticket at 4:30 (I was told that it was too late anyway and that they were not sure I would get a refund). Around 7:00, when I was having dinner with the Alers (and when I was just about to leave for Warsaw) the phone rang and I was told that the answer from Warsaw had just arrived and that they could issue a transit visa through the USA, but it was already too late, I had no ticket for the ship and nothing I could be done, because both Cook’s and USA lines’ offices were already closed. The visa could not be effectively issued until the morning of the 19th anyway and it was too late. I telegraphed Haworth at 5:00 saying that I couldn’t come because of the lack of a visa. By the way, I wrote a letter to you the day before, (after receiving the Canadian visa) convinced tjhat I would be coming and even asked you to meet me in New York (because that is where I was supposed to fly to Toronto from). But nothing came of it.
c       You have my paper; I expect it will be translated. Anyway, I feel this tired and irritated by this whole affair. I think that after my telegram from Krakow Haworth could have arranged for both visas to be sent to me right away. Professor Aler made sure that I got the Dutch visa a week before I left Warsaw in Warsaw, why couldn’t the same be done with the Canadian visa? You must, after all, be aware of all the difficulties and hardships we are exposed to here. I did not need this whole trip, I only did it for you to try and be in Wat[erl]oo in person, but it only caused me extreme irritation. Cordial greetings