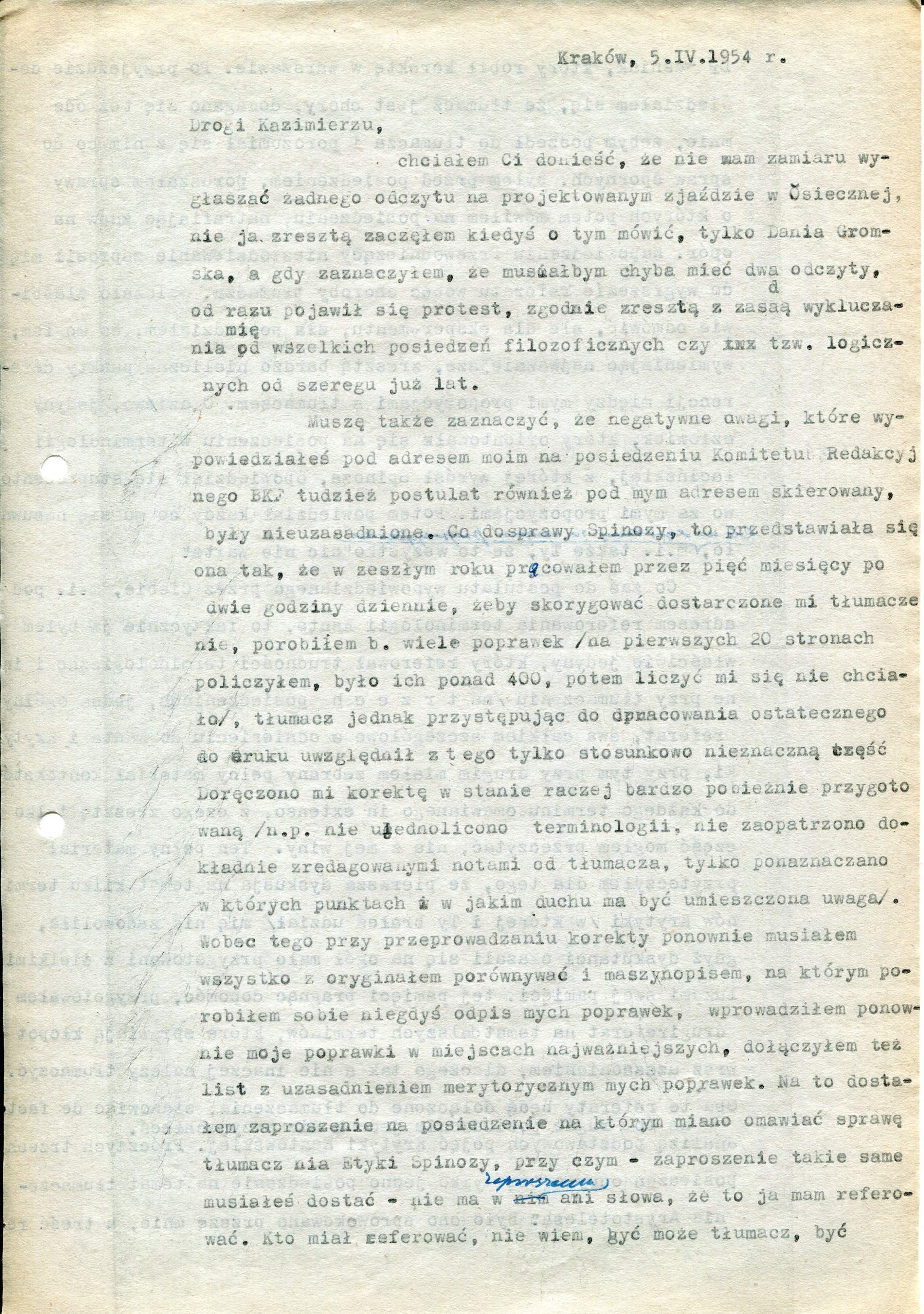 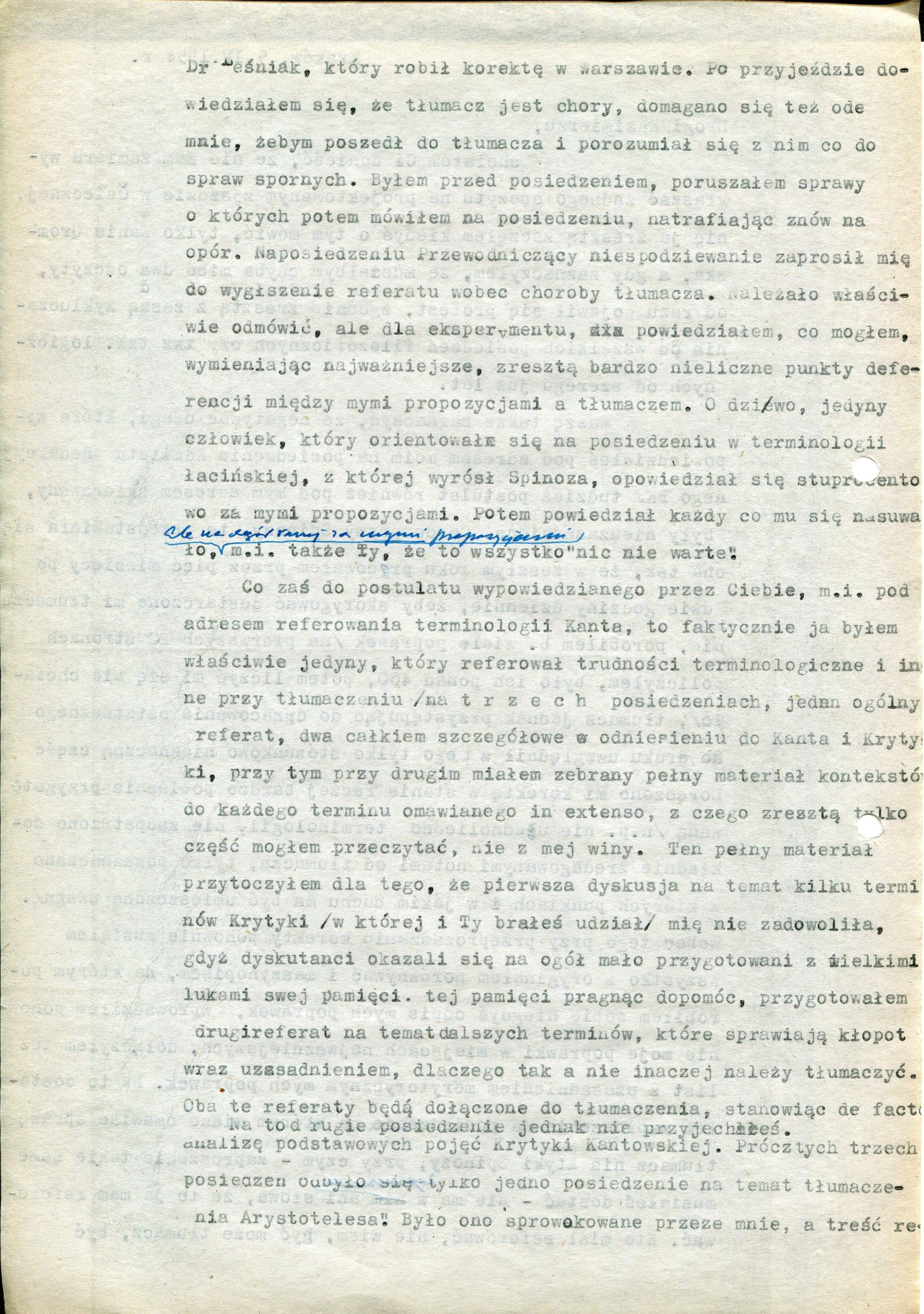 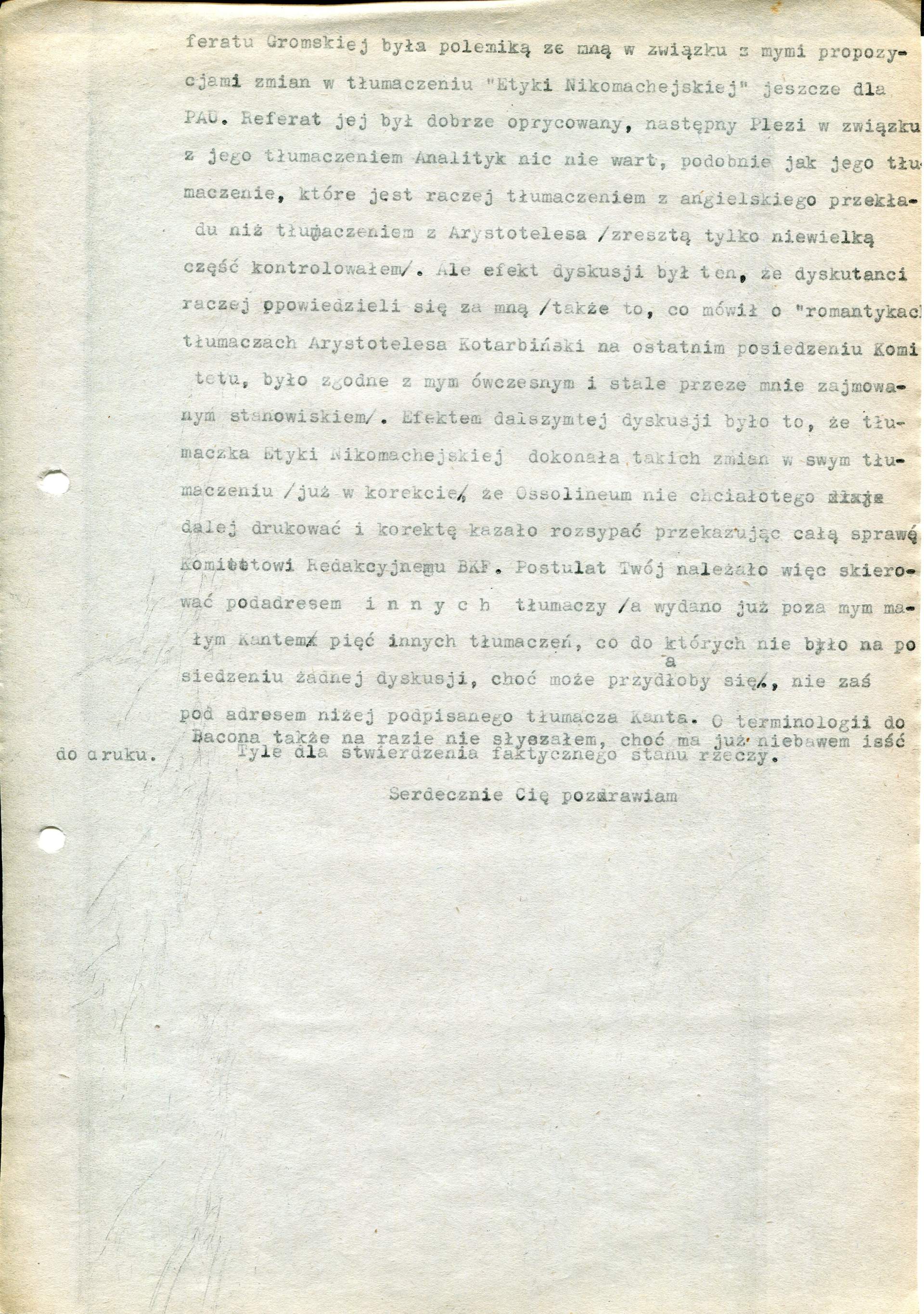 I wanted to inform you that I don’t intend to give any lectures at the planned conference in Osieczna; besides, it wasn’t I, but Dania Gromska, who started talking about it, and when I mentioned that I’d probably have to have two lectures, a protest arose immediately, in accordance, moreover, with the principle of excluding me from all philosophical or so-called logical meetings for what is now a number of years.

I must also point out that the negative comments you addressed to me at the Editorial Board meeting of the Library of Classics of Philosophy, as well as the postulate also directed to me, were unjustified. As for the Spinoza case, it presented itself in the following way: last year I worked for five months, for two hours a day, to correct the translation provided to me, making a great many corrections (in the first 20 pages I counted them, and there were over 400; afterwards, I no longer wanted to count); the translator, however, in proceeding to work on the final version for printing, took only a relatively insignificant portion of them into account. The corrections I was given were very hastily prepared (e.g. the terminology had not been made uniform; it had not been supplied with carefully edited notes from the translator; instead, it had merely been indicated at which points and in what spirit comments were to be placed).

In light of this, while making the corrections again, I had to compare everything in the original with the manuscript on which I had previously made a copy of my corrections; I re-introduced my corrections in the most important places; I also included a letter with a substantive justification of my corrections. In answer to this, I received an invitation to a meeting at which the issue of the translation of Spinoza’s Ethics was to be discussed, at which – you must have received the same invitation – there was not a single word to the effect that I was supposed to speak. As to who was supposed to speak, I don’t know; maybe the translator, or Dr Leśniak, who had made corrections in Warsaw. Upon my arrival I learned that the translator was ill; I was also told to go to the translator and reach an understanding with him about the disputed issues. I went, prior to the meeting, and raised the issues that I later spoke about at the meeting, again encountering resistance. At the meeting the Chairman unexpectedly invited me to present a speech, in light of the translator’s illness. Actually, the thing to do was to refuse, but for the sake of experiment, I said what I could, listing the most important, and in any case very few, points of difference[O1]  between my proposals and the translator. Strangely, the only man present at the meeting who was versed in the Latin terminology from which Spinoza emerged stood one hundred per cent behind my proposals. Later, everybody talked about what he had suggested, but … as to my propositions, everybody, including you, said it was all ‘worthless’.

As to the postulate you denounced, regarding inter alia the report on Kant’s terminology, I was actually the only one who reported the terminological and other difficulties in the translation (at three meetings and in one general and two quite detailed papers in reference to Kant and the Critique, in the second of which I had collected complete material concerning the contexts for each term discussed in extenso, of which, in any case, I was able to read only a part, through no fault of my own). I provided this material in full because I was not satisfied with the first discussion on the topic of several terms in the Critique (in which you, too, took part), since the participants proved to be generally poorly prepared, with great gaps in their memories. Wishing to assist these memories, I prepared a second paper on additional problematic terms, along with a justification of why these terms should be translated in a certain way rather than otherwise.
Both of these papers were attached to the translation, constituting a de facto analysis of basic concepts of Kant’s Critique (you did not come to this second meeting). Apart from these three meetings, only one meeting was held on the topic of the translation of Aristotle. This was at my instigation, and the content of Gromska’s paper was a polemic against me in connection with my proposals for changes in the translation of Nicomachean Ethics, again for PAL. Her paper was well developed; the next, Plezia’s, in connection with his translation of Analytics, was just as worthless as his translation, which is more a translation of an English version than a translation of Aristotle (in any case, I checked only a small part). But the result of the discussion was that the participants rather supported me (moreover, what Kotarbiński said about the ‘romantic’ translators of Aristotle at the last meeting of the Committee was consistent with the position I occupied then and have always occupied). An additional result of the discussion was that the translator of Nicomachean Ethics made such extensive changes in her translation (now being corrected) that Ossolineum no longer wished to print it and ordered the corrections to be distributed among several individuals, handing over the whole business to the Editorial Committee of the Library of Philosophical Classics. Your postulate, then, should be addressed to the other translators of five other (already published, besides my little Kant) translations, about which there was no discussion at the meeting, though that might have been useful, and not to the undersigned translator of Kant. As of yet I’ve heard nothing about the terminology for Bacon, though it’s supposed to go to press soon.

So much for stating the actual state of affairs.

Cordial greetings to you