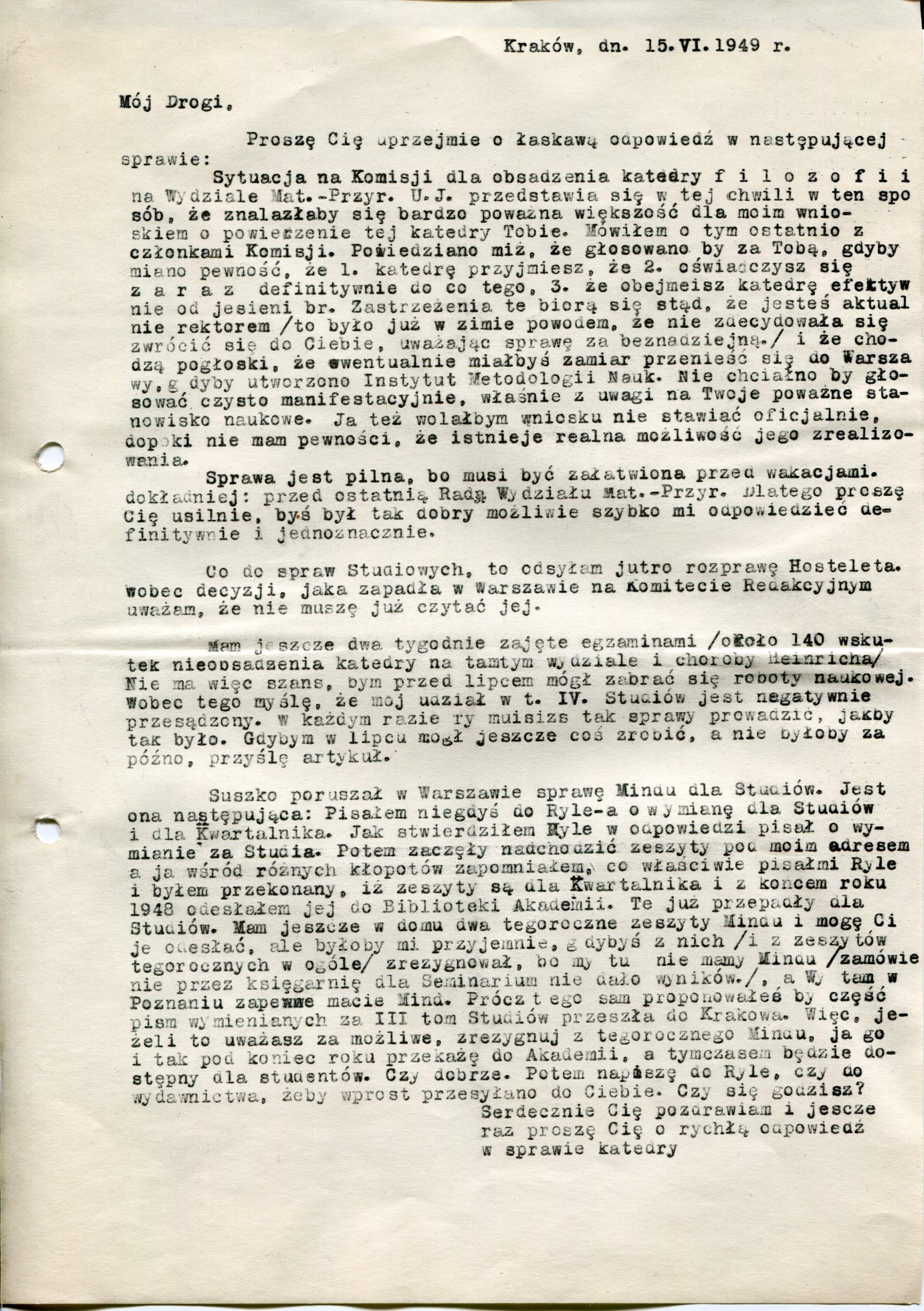 Please be so good as to respond in the following matter:

The situation at the Commission in regard to filling the chair of philosophy at the Dept. of Math-Nat. Sci. UJ at this time presents itself in such a way that a very substantial majority can be found in favour of my proposal to entrust this chair to you. I spoke about this recently with members of the Commission. I was told that they would vote for you if they were sure that: 1. you would accept the chair; 2. you would announce this definitively at once; 3. you would assume the chair effective as of the autumn of this year. These caveats arise from the fact that you are currently rector (this was the reason they had decided not to approach you this past winter, regarding the matter as hopeless) and that rumours are circulating that you might be planning to move to Warsaw, if the Institute of Science Methodology is established. A purely symbolic vote was not desired, precisely in view of your important academic position. I, too, would prefer not to make an official proposal unless I am sure that there is a real possibility of its acceptance.

The matter is urgent, because it must be resolved before the holiday – to be precise, prior to the final Council of the Dept. of Math-Nat. Sci. Therefore I strongly urge you to be so good as to answer me definitively and unequivocally as soon as possible.

As for the affairs of Studies, I’m sending Hostelet’s paper tomorrow. In view of the decision reached in Warsaw by the Editorial Committee, I don’t think I need to read it at this point.

I still have two weeks of being busy with examinations (about 140, due to the vacancy of the chair that department and Heinrich’s illness). Thus there is no chance that I’ll be able to take up academic work before July. In view of that, I think my participation in Vol. IV of Studies is a foregone (negative) conclusion; in any case, you have to manage things as if it were. If I can still do something in July, and it’s not too late, I’ll send an article.

Suszko raised the issue, in Warsaw, of Mind for Studies. This matter is as follows: I once wrote to Ryle concerning an exchange for Studies and for Quarterly. As I’ve stated, Ryle, in his reply, wrote about an exchange for Studia. Then issues began to arrive at my address, and, being in the middle of various problems, I forgot what Ryle had actually written to me and was convinced that the papers were for Quarterly, and at the end of 1948 I sent them to the Academy Library. As far as Studies is concerned, they’re already lost. I still have two issues of Mind from this year and can send them back to you, but it’d be nice if you relinquished them (and this year’s issues altogether) because we don’t have Mind here (ordering through the bookstore for the Seminar produced no results), while you certainly have Mind there in Poznań. Apart from that, you yourself suggested that some of the papers exchanged for Vol. III of Studies be sent to Cracow. Therefore, if you think it’s possible, give up on this year’s Mind; I’ll send it to the Academy before the end of the year anyway, and meanwhile it will be available to students. All right? Then I’ll write to Ryle or to the publishers to send it straight to you. Do you agree?

Letter to the Committee of the Library of Classics of Philosophy written 28.02.1953

Letter to the Committee of the Library of Classics of Philosophy written 03.12.1968

Letter to the Committee of the Library of Classics of Philosophy written 24.03.1954