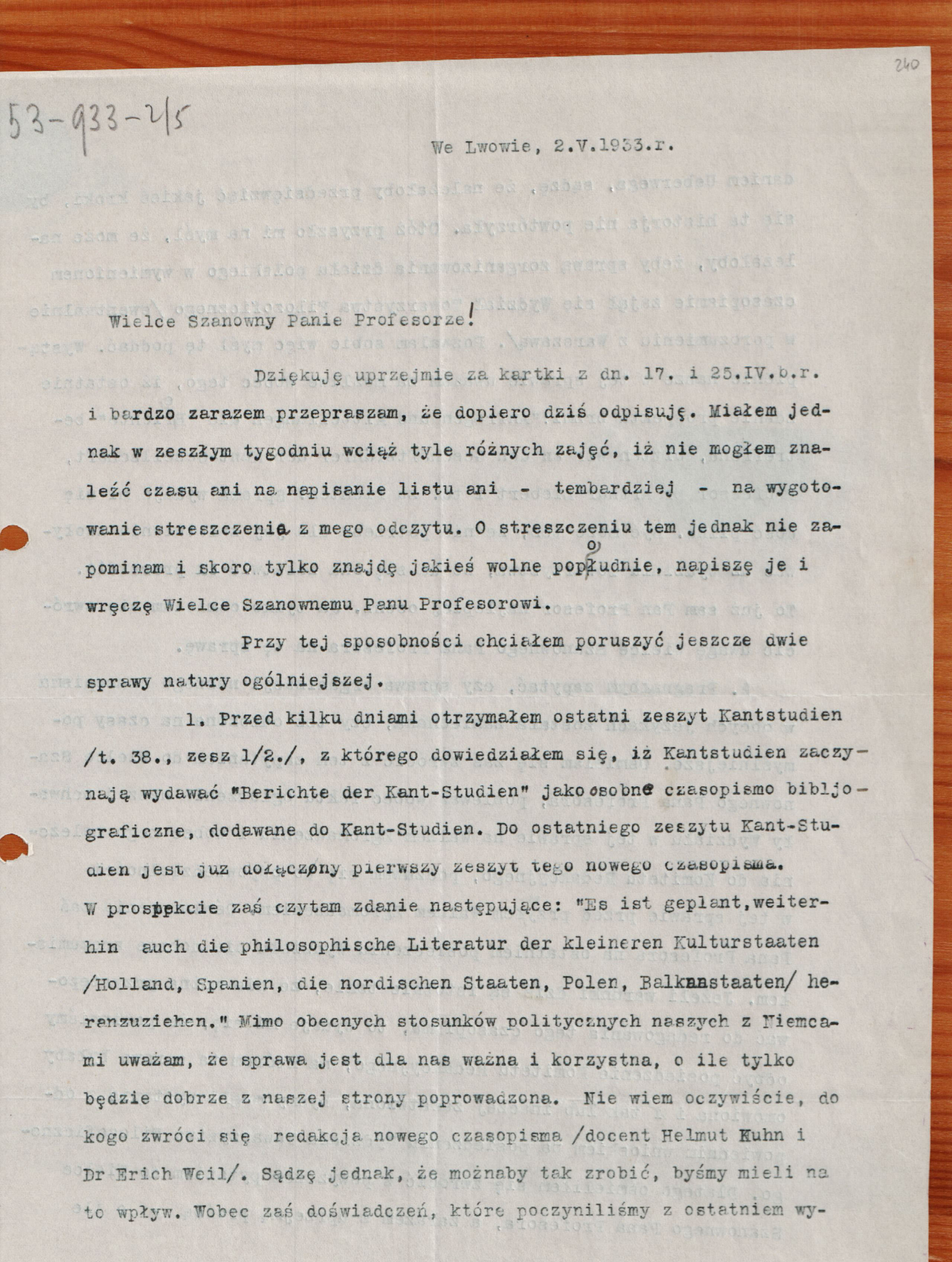 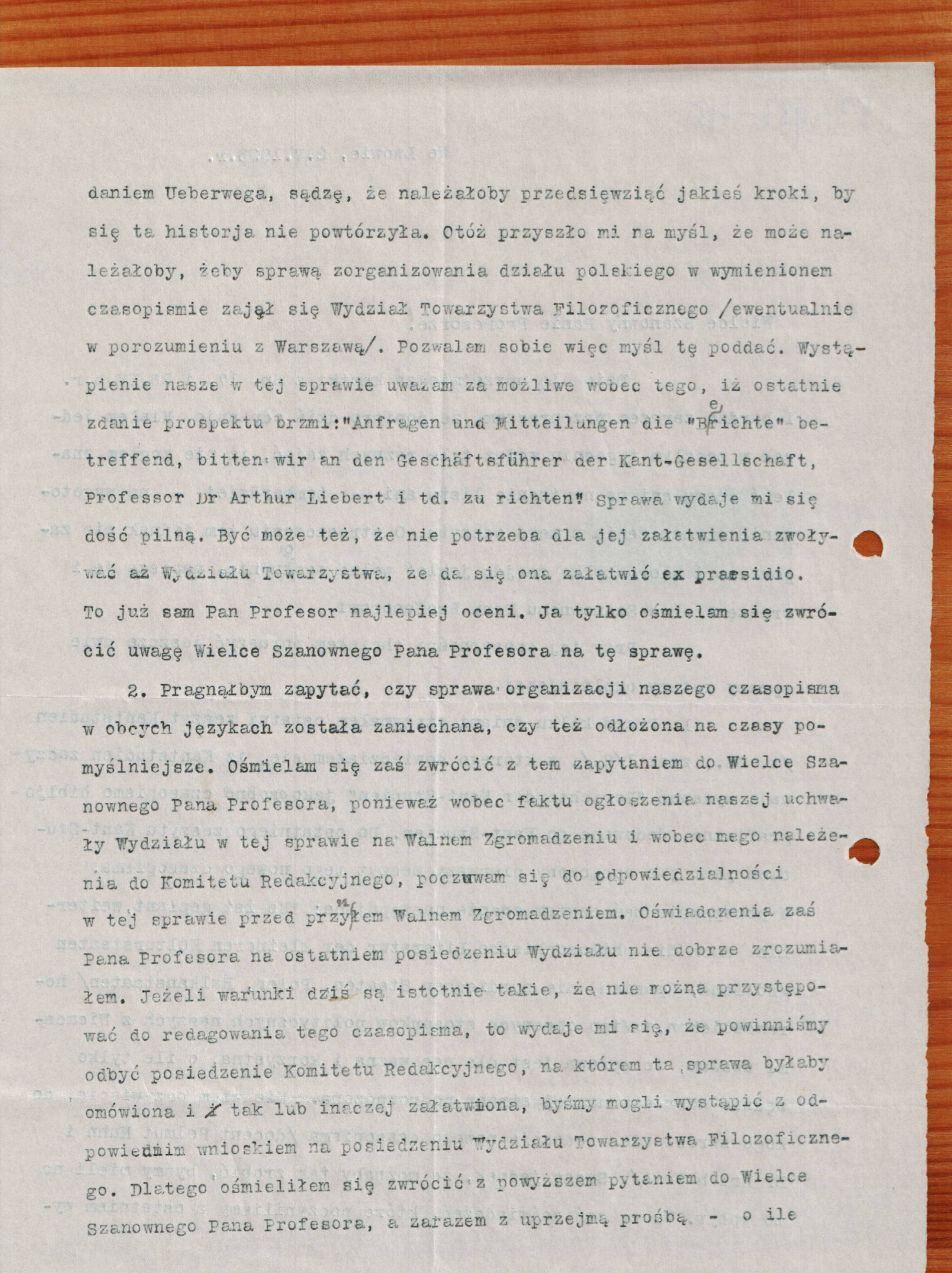 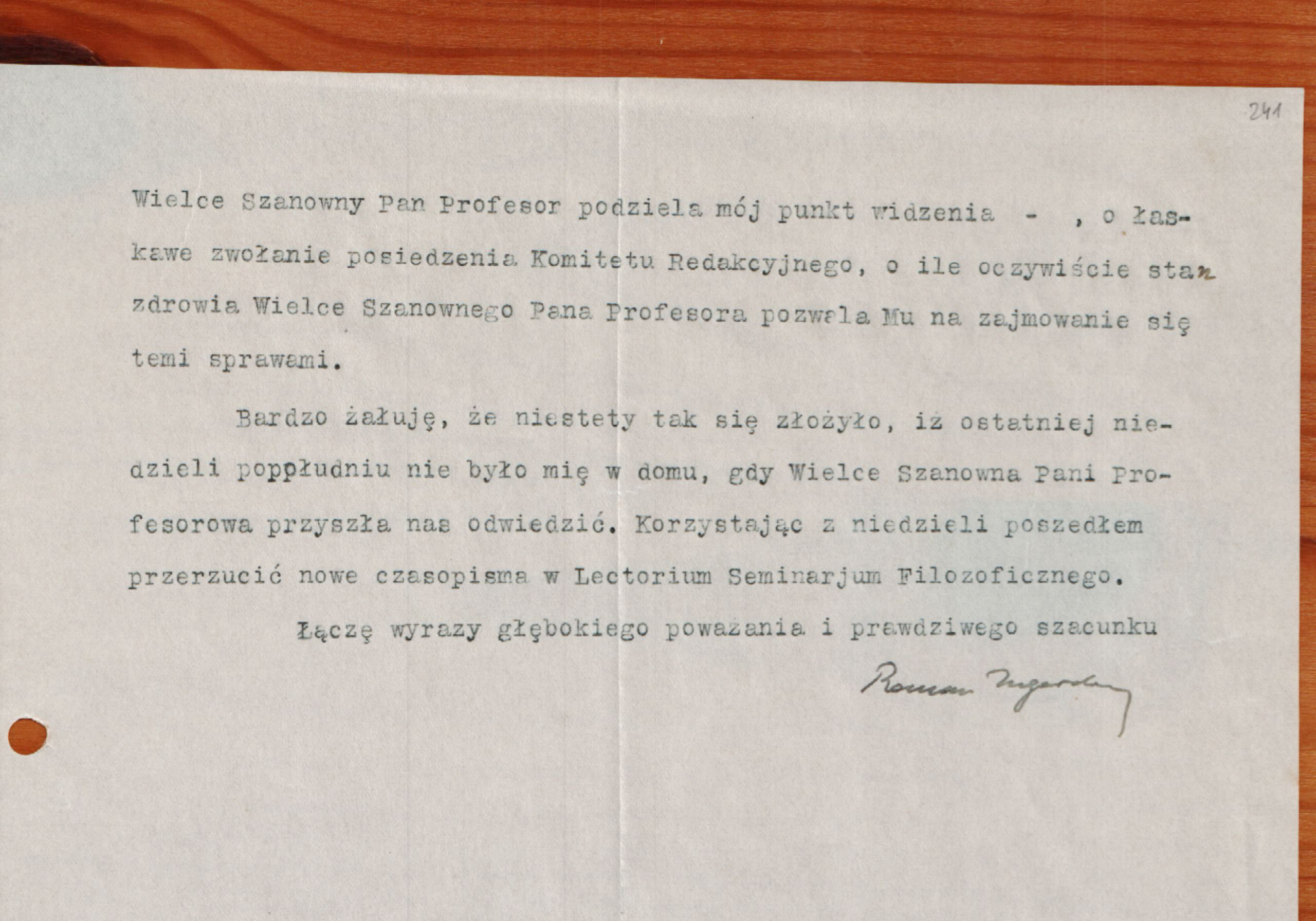 I thank you kindly for your cards of 17 and 25/4 of this year, and at the same time apologise for responding only today. However, I had so many different things to do last week that I couldn’t find the time either to write a letter or – worse yet – to boil down a summary from my lecture. I’m not forgetting about the summary, however, and if I can only find a free afternoon, I’ll write it and give it to you.

Given this opportunity, I wanted to raise two more issues of a general nature.

1. A few days ago, I received the latest issue of Kant-Studien [Kant studies] (vol. 38, issue 1/2) from which I learned that Kant-Studien is starting to publish Berichte der Kant-Studien [Reports of Kant studies] as a separate bibliographic publication to be added to Kant-Studien. The first issue of this new publication has already been attached to the latest issue of Kant-Studien. In the prospectus, I read the following sentence: ‘Es ist geplant, weiterhin auch die philosophiche Literatur der kleineren Kulturstaaten /Holland, Spanien, die nordischen Staaten, Polen, Balkanstaaten/ heranzuziehen’ [It is planned to include herein a continuation of the philosophical literature of the smaller civilised countries (the Netherlands, Spain, the Nordic countries, Poland, and the Balkan countries)]. In spite of our current political relations with Germany, I think that this matter is important and advantageous for us, as long as it’s managed well on our part. Of course, I don’t know whom the editors of the new journal (docent Helmut Kuhn [O1] and Dr Erich Weil[O2] ) will turn to. I think, however, that it could be done so that we’d have an influence on it. However, given the experiences we had with the last edition of Ueberweg[O3] , I think that it’d be necessary to take steps to prevent that from happening again. Well, it occurred to me that perhaps the matter of organising the Polish section in the above-mentioned journal should be handled by the Department of the Philosophy Society (possibly in agreement with Warsaw). Thus I’ve taken the liberty of suggesting this idea. I regard our intervention in this matter as possible, given that the last sentence of the prospectus runs: ‘Anfragen und Mitteilungen die „Berichte” betreffend, bitten wir an den Geschäftsführer der Kant-Gesellschaft, Profesor Dr Arthur Liebert[O4] ” etc. zu richten’ [We ask that inquiries and communications concerning the Reports be addressed to Professor Arthur Liebert of the Kant-Gesellschaft, etc.]. The matter seems to me quite urgent. It may also be that there is no need to convene the Department of the Society in order to arrange it – that it can be done ex praesidio [Latin: from the garrison, i.e. without involving the hierarchy]. You yourself would be the best judge of that. I’m merely taking the liberty of drawing your attention to this matter.

2. I’d like to ask whether the publication of our journal in foreign languages has been discontinued or set aside until a more favourable time. I’m taking the liberty of turning to you with this question because, in view of the announcement of our Departmental resolution in this matter at the General Assembly, and of the fact that I belong to the Editorial Committee, I feel responsible in this matter with respect to the upcoming General Assembly. I didn’t clearly understand your statements at the last meeting of the Department. If the present conditions are essentially such that it’s not possible to proceed with the editing of this journal, it seems to me that we should call a meeting of the Editorial Committee at which this matter would be discussed and settled one way or another, so that we’d be able to make an appropriate motion at the meeting of the Department of the Philosophical Society. That’s why I’ve taken the liberty of turning to you with this question, and, at the same time, with a polite request – if you share my point of view – for a meeting of the Editorial Committee to be convened, provided, of course, that the state of your health permits you to occupy yourself with these matters.

I greatly regret that, unfortunately, it so happened that I wasn’t at home last Sunday afternoon when you came to visit us, as I’d made use of Sunday to go and place new journals in the Reading Room of the Philosophical Seminarium.

I enclose expressions of profound esteem and genuine respect

Letter to the Committee of the Library of Classics of Philosophy written 24.03.1954

Letter to the Committee of the Library of Classics of Philosophy written 23.01.1953