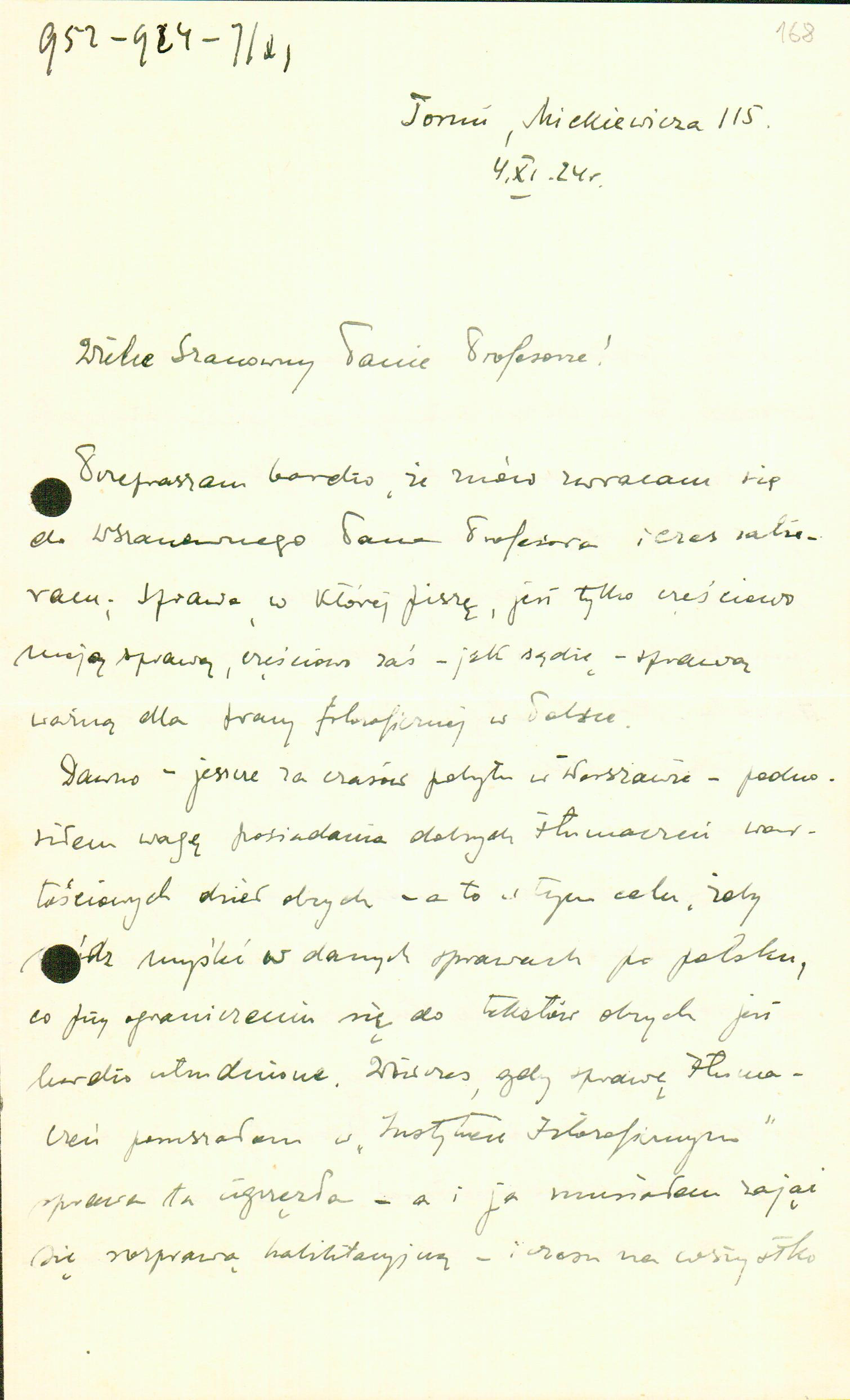 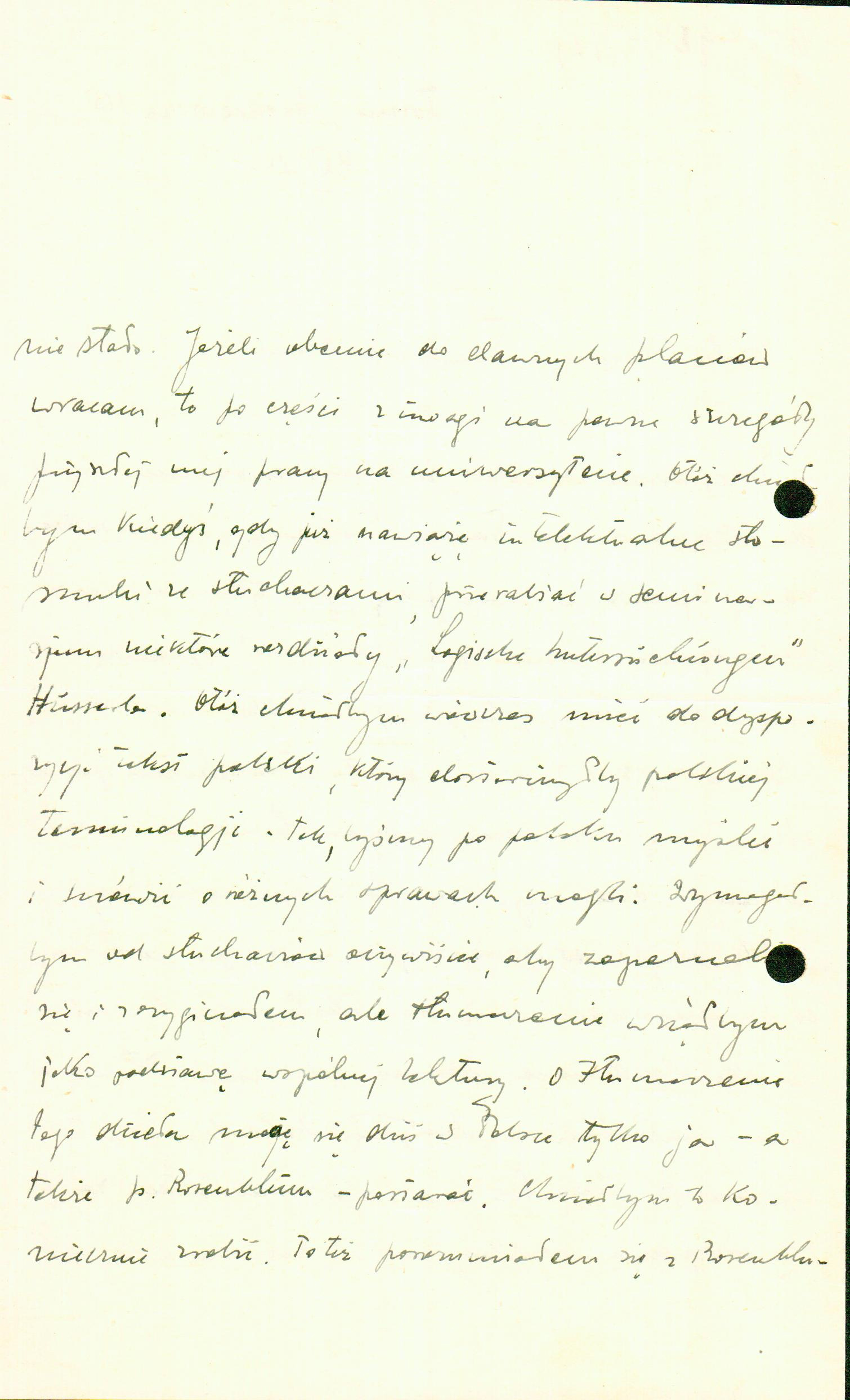 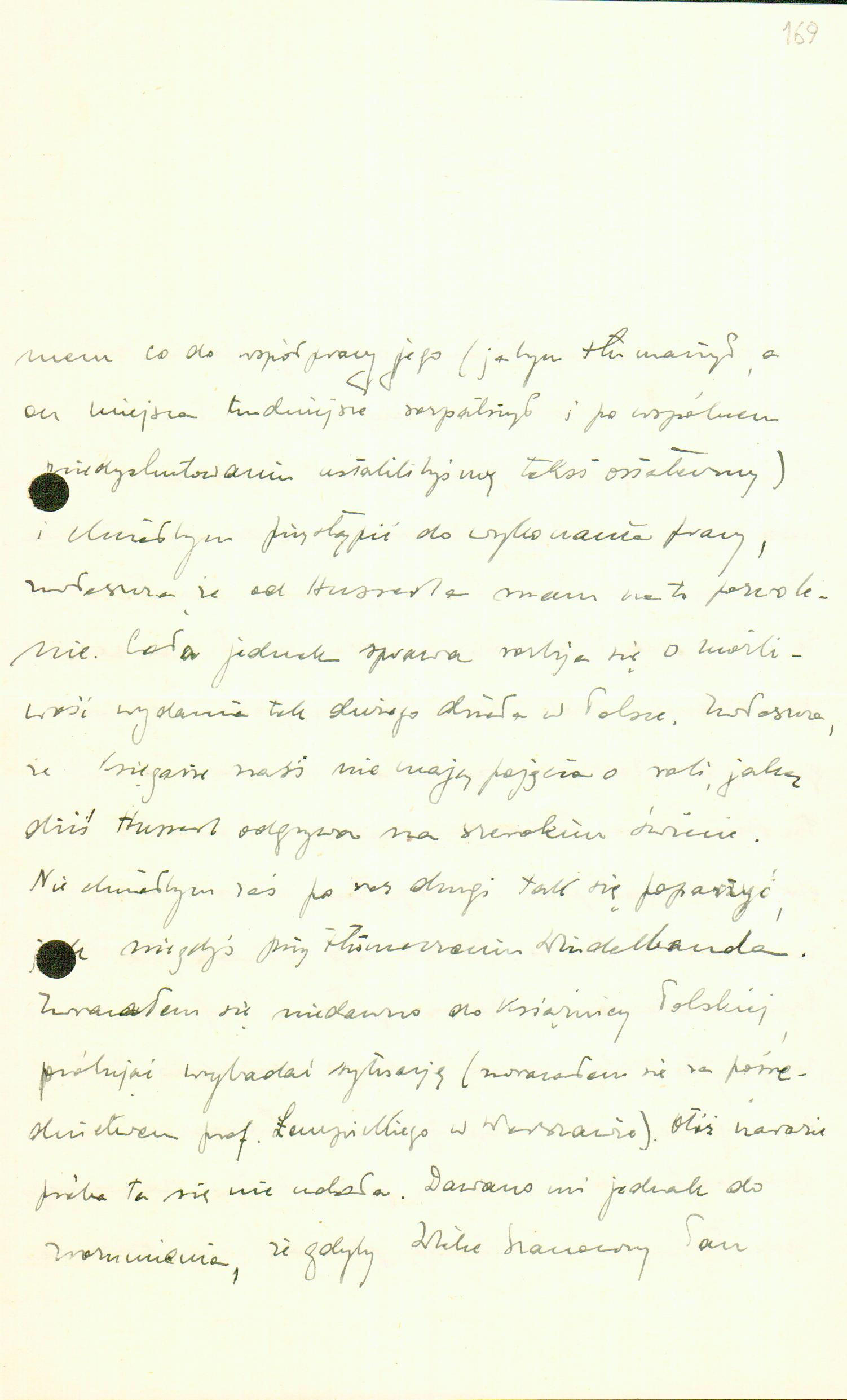 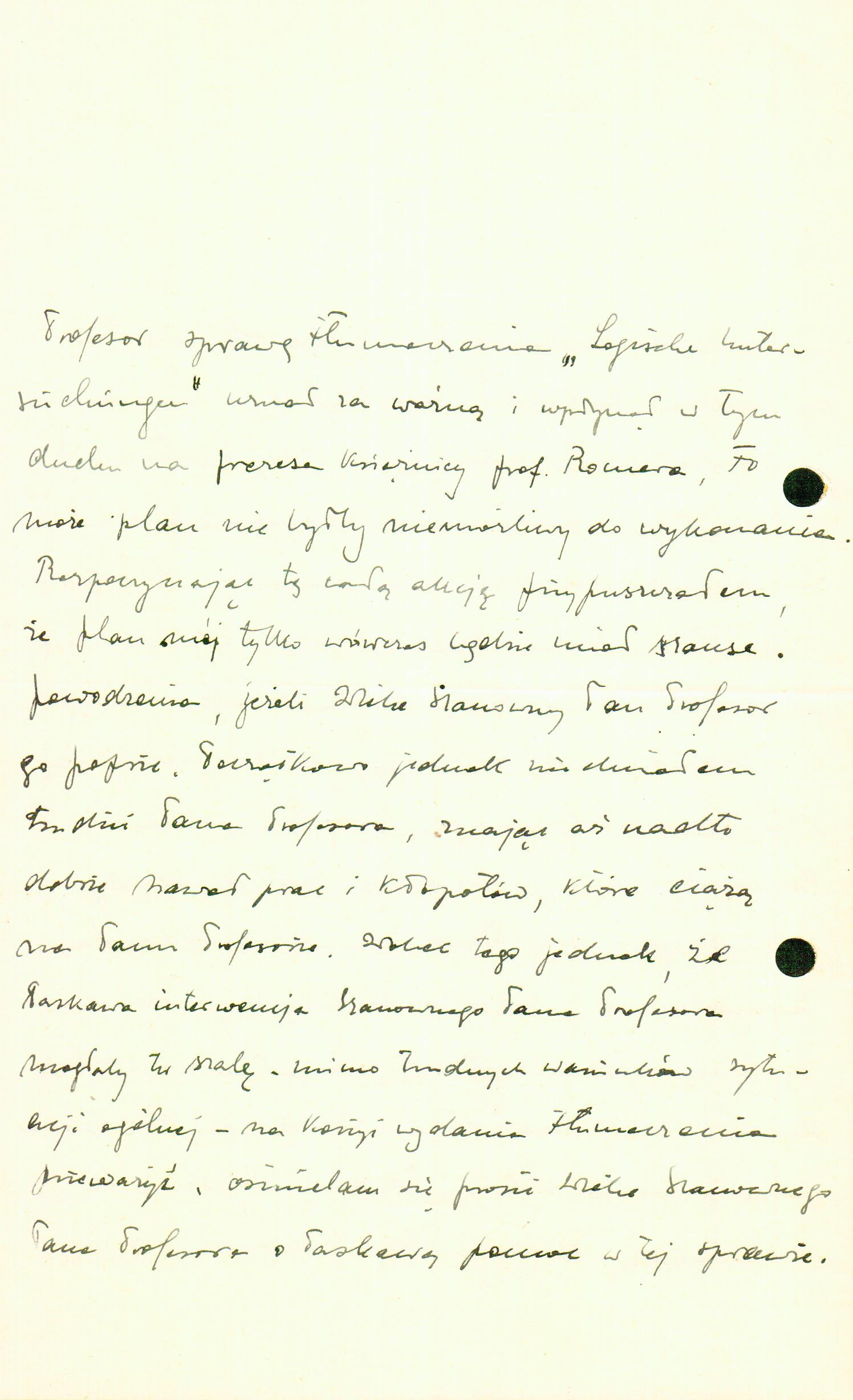 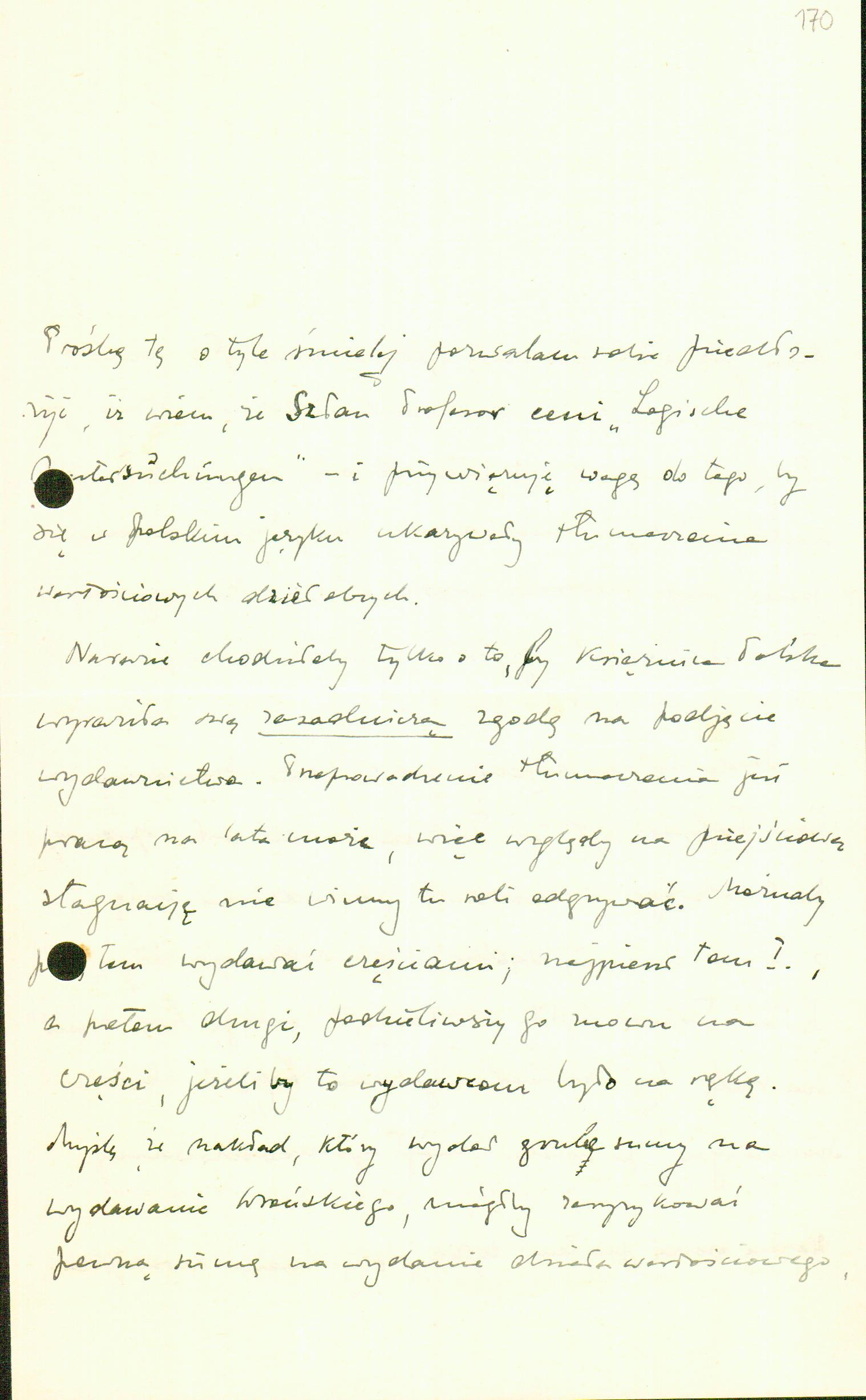 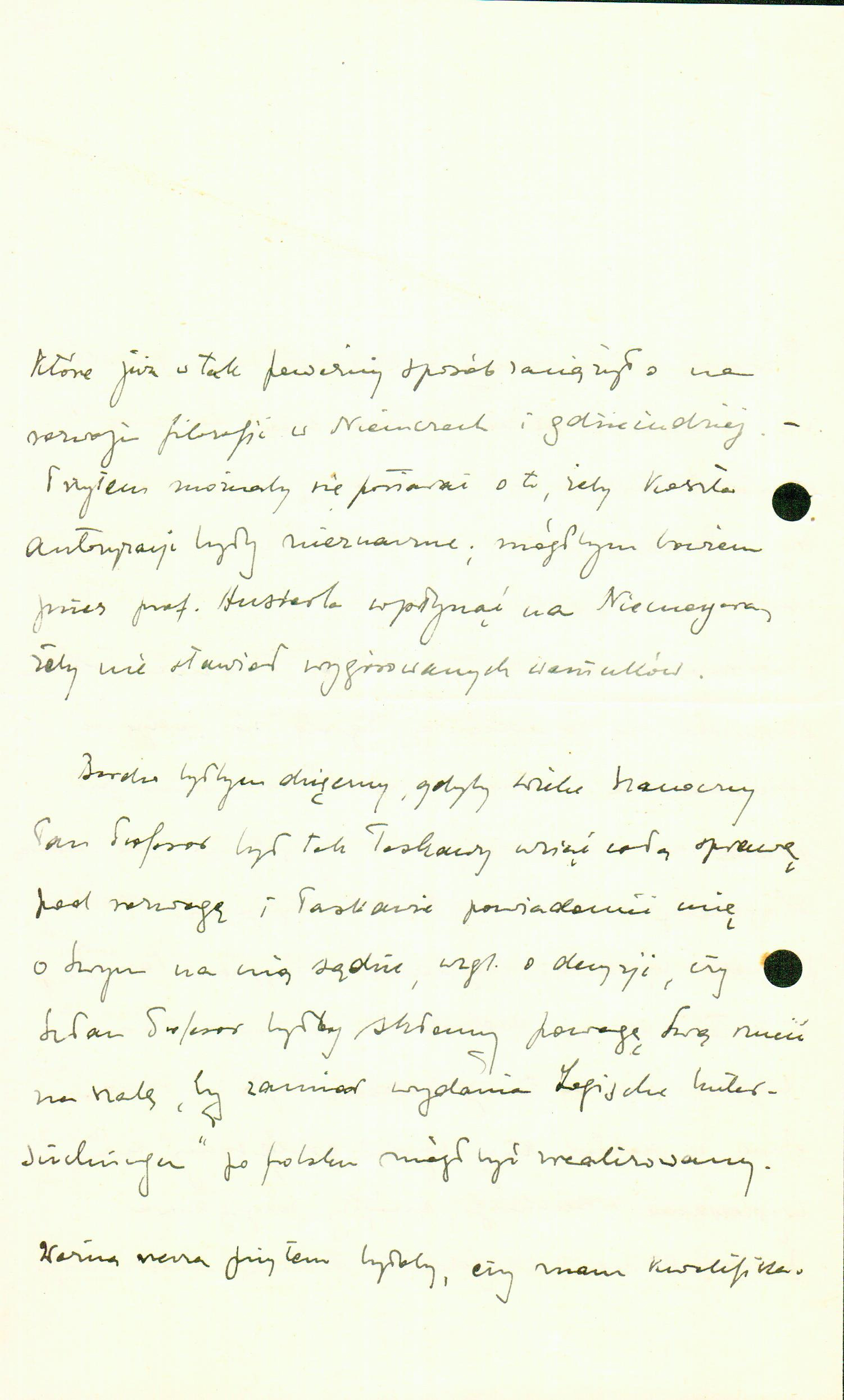 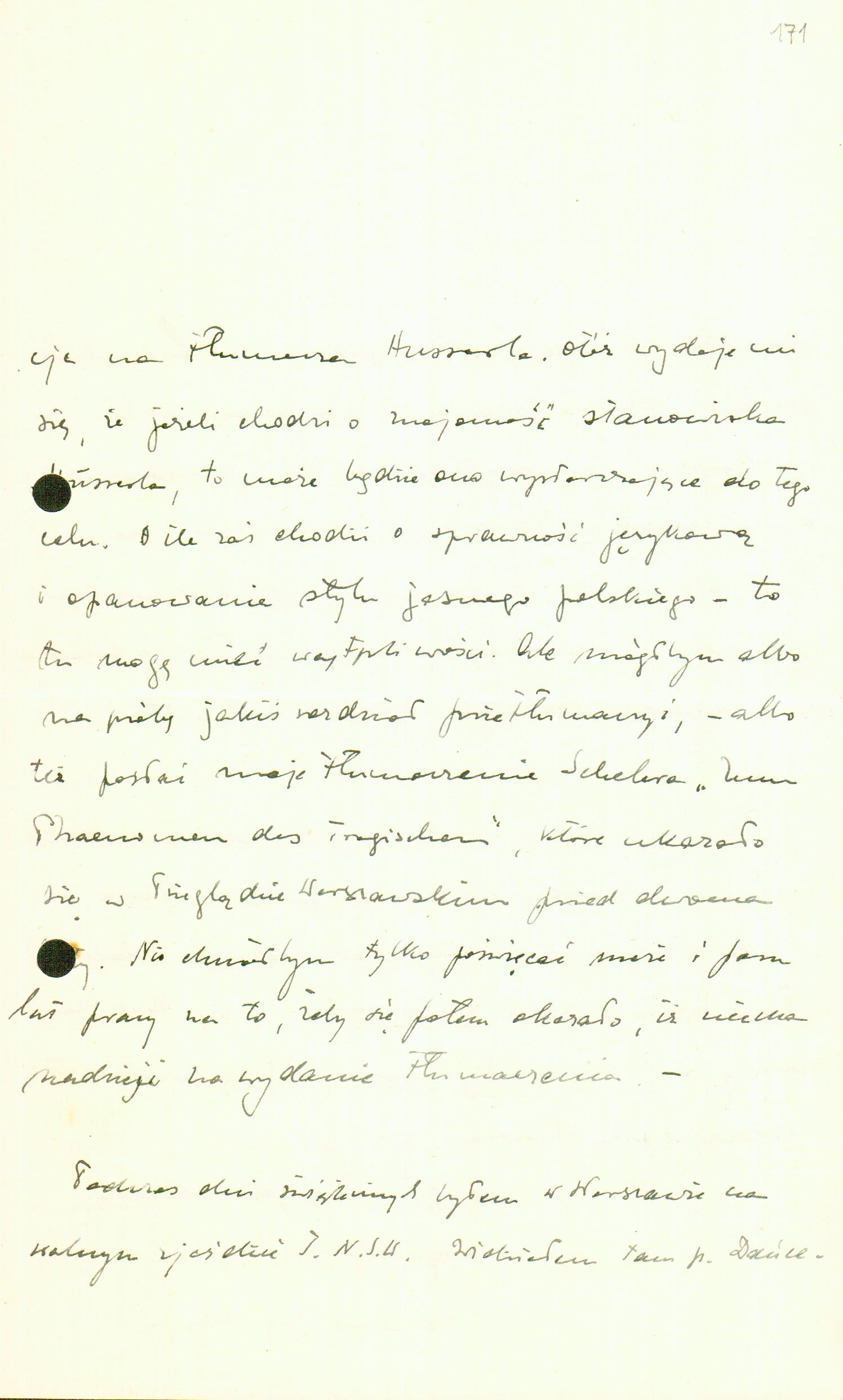 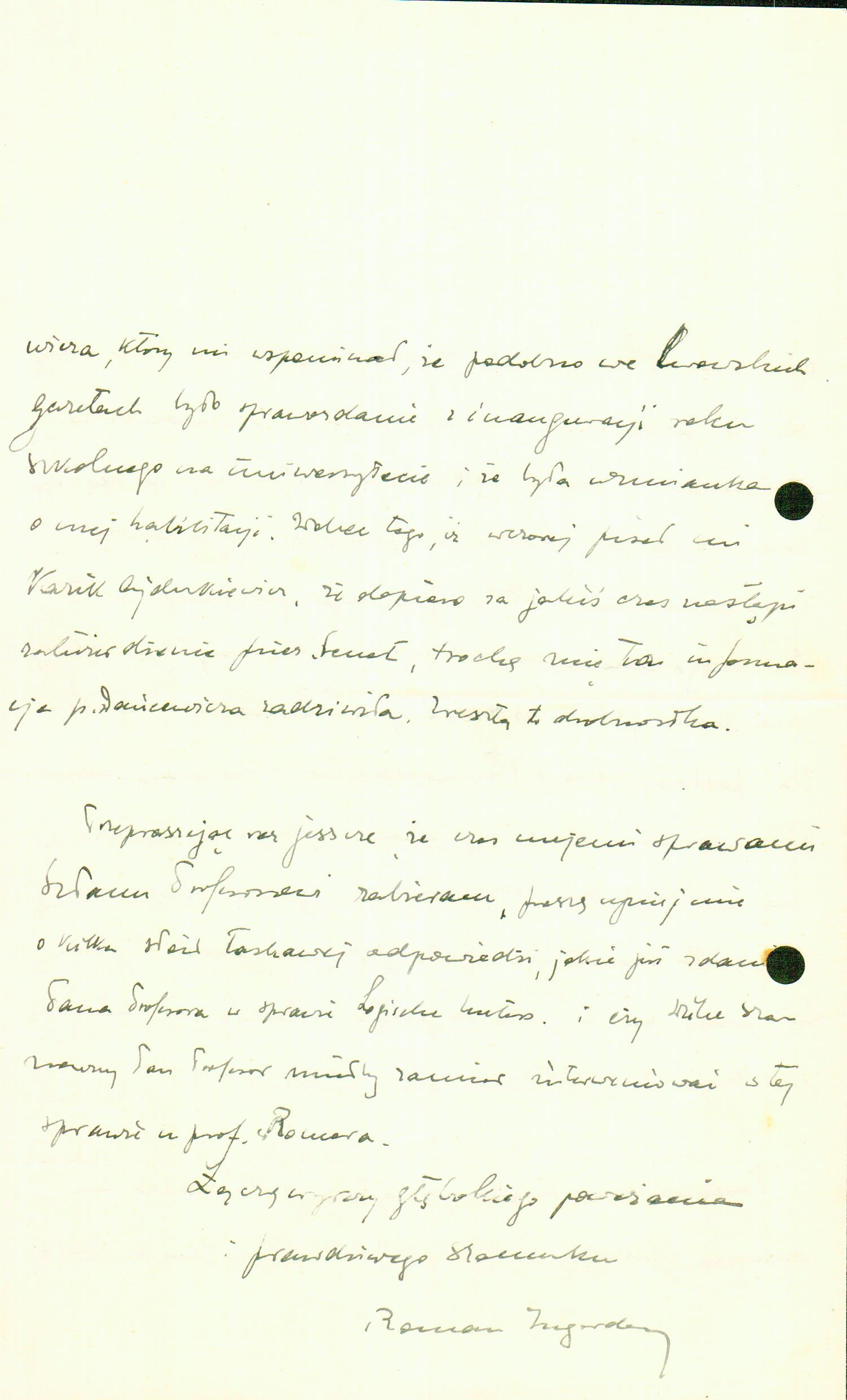 I apologise for once again turning to you and taking your time; the matter I’m writing about is only partly my own problem, partly ‒ as I believe ‒ an important issue for philosophical work in Poland.

Earlier – at the time of my stay in Warsaw – I raised the question of the importance of having translations of valuable foreign works ‒ for the sake of being able to think about certain matters in Polish, which, when one is limited to foreign texts, is very difficult. At the time when I raised the issue of translations at the ‘Philosophical Institute’, the matter became bogged down, and moreover I had to occupy myself with my habilitation dissertation ‒ and there wasn’t time for everything. That I’m now returning to those earlier plans is due partly to certain details of my future work at the university. Well, someday, when I’ve established intellectual relations with my students, I’d like to introduce some chapters of Husserl’s Logische Untersuchungen [Logical Investigations] into the seminar. Well, at that point I’d like to have a Polish text at my disposal, one that would supply Polish terminology – so that we could think and talk about various issues in Polish. Of course, I’d require the students to familiarise themselves with the original, but I would take the translation as a basis for shared reading. Today in Poland, the translation of this work can be attempted only by myself – or by Mr Rosenblum[O1] . I’d definitely like to do it. Therefore, I talked to Rosenblum concerning his collaboration (I’d translate, he’d examine the most difficult places, and, after a joint discussion, we’d establish the final text) and I’d like to go ahead and carry out the project, especially since I have permission from Husserl to do so. The whole matter, however, hinges on the potential for publishing such a large work in Poland, especially given that our booksellers have no idea about the role played by Husserl today in the wider world. I don’t want to get burned again as I once did with the translation of Windelband. I turned recently to Polish Library, in an attempt to sound out the situation (I did so through Prof. Łempicki [O2] in Warsaw). Well, as of yet this attempt has not met with success. However, I was given to understand that if you considered the matter of translation of Logische Untersuchungen important and were to influence, in this spirit, Library’s president, Prof. Romer[O3] , perhaps it wouldn’t be impossible to carry out the plan. When I started this whole campaign, I supposed that my plan would have a chance of success only if you were to support it. At first, however, I didn’t want to bother you, being all too familiar with the overload of work and problems weighing on you. Since, however, your gracious intervention could tip the balance here ‒ despite the difficult conditions of the situation in general ‒ in favour of publication of the translation, I’m taking the liberty of asking you for your gracious help in this matter. I’ve allowed myself to make such a bold request, knowing that you value Logische Untersuchungen and attach importance to the appearance in Polish of translations of valuable foreign works.

For now, it’s a question only of Polish Library expressing its basic agreement to undertake publication. Completing the translation may be the work of several years; therefore, considerations of transient stagnation shouldn’t play any role here. In light of this, it might be possible to publish it in parts: first Volume I and then II, having divided it again into parts, if that were to suit the publishers. I think that the publishing house which spent a substantial sum publishing Wroński[O4]  could risk a certain amount on publishing a valuable work which has already affected the development of philosophy in Germany and elsewhere in such an important way. ‒ At the same time, attempts could be made to assure that the costs of authorisation were insignificant; indeed, I might exert influence, through Prof. Husserl, on Niemeyer not to set excessively rigorous conditions.

I’d be very grateful if you’d be so gracious as to take the whole matter under consideration and kindly inform me of your verdict concerning it, i.e. your decision as to whether you’re inclined to throw your weight on the scale so that the intention to publish Logische Untersuchungen in Polish might be realised.

One important thing here would be whether I possess the qualifications to translate Husserl. Well, it seems to me that, in terms of an acquaintance with Husserl’s position, they may be sufficient for this purpose. But in terms of linguistic proficiency and mastery of a clear Polish style ‒ here I may have doubts. But I could either attempt to translate a sample chapter, or send my translation of Scheler’s Zum Phaenomen des Tragischen [The Phenomenon of the Tragic] which appeared in Warsaw Review two years ago. I don’t want to devote what may be several years of work to it, only to have it turn out later that there’s no hope of publishing the translation. ‒

During the holidays, I was in Warsaw at the general assembly of T.N.S.W. (Towarzystwo Nauczycieli Szkół Średnich i Wyższych [Association of Middle and High School Teachers]). There, I saw Mr Dańcewicz[O5] , who mentioned that in the Lviv newspapers there was a report on the inauguration of the school year at the university including mention of my habilitation. Because Kazik Ajdukiewicz wrote to me yesterday that the Senate would approve this only after some time had passed, I was a bit confounded by this bit of news from Mr Dańcewicz. Anyway, that’s a trifle.

While apologising once again for taking up your time with my issues, I politely request a few words of gracious reply as to your opinion on the issue of Logische Unter. and whether you have any intention of intervening with Prof. Romer in this matter.

I enclose expressions of profound esteem and true respect

Letter to the Committee of the Library of Classics of Philosophy written 10.12.1953