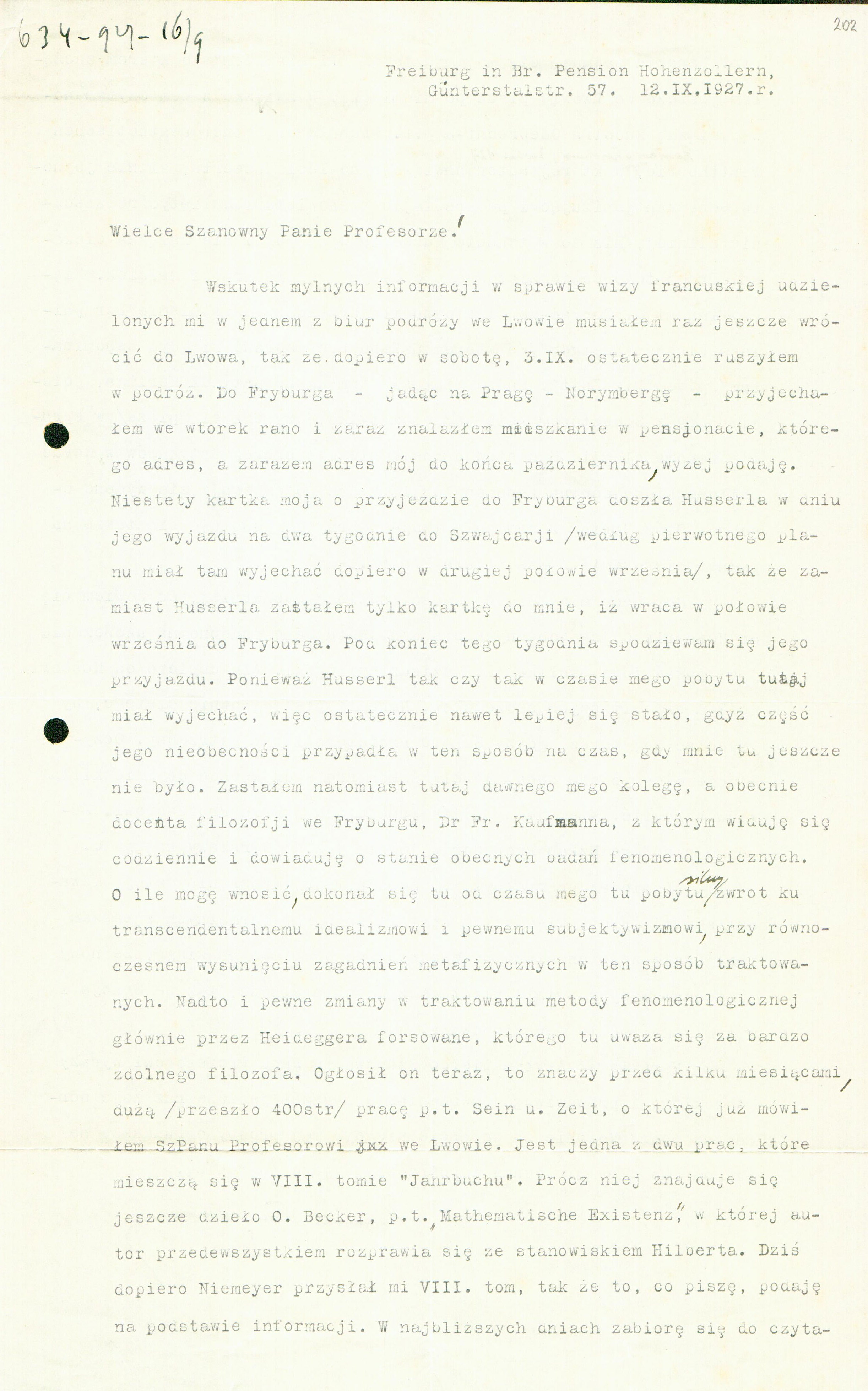 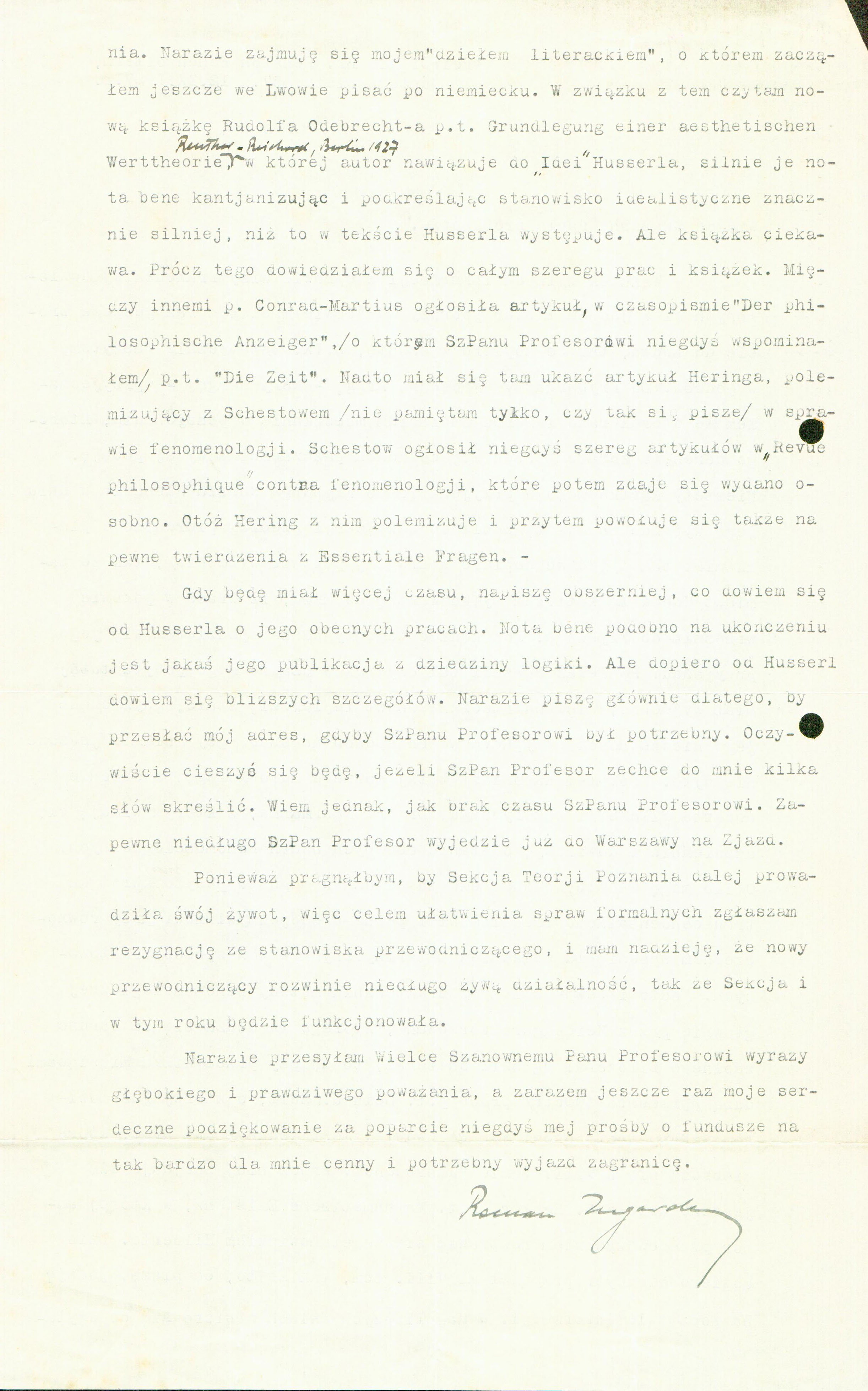 As a result of misleading information about French visas that had been given me in one of the Lviv travel agencies, I had to return once more to Lviv, so that it was only on Saturday, 3/9, that I finally set out on my journey. I arrived in Freiburg, by way of Prague and Nuremberg, on Tuesday morning, and immediately found a flat in a guest house whose address, which is also my address until the end of October, I’ve given above. Unfortunately, my card about my arrival in Freiburg reached Husserl on the day of his departure for two weeks in Switzerland (according to the original plan, he wasn’t supposed to leave until the second half of September), so that instead of Husserl I found only a card addressed to me to the effect that he’d be returning to Freiburg in the middle of September. I’m expecting him to arrive at the end of this week. Because Husserl was supposed to leave town one way or another during my stay, ultimately this was even better, since in this way a portion of his absence came at a time when I hadn’t yet arrived. However, I found an old colleague of mine here, Dr Fritz Kaufmann[O2] , presently a docent in philosophy at Freiburg, whom I see every day and from whom I learn about the current state of phenomenological research. As far as I can tell, since the time of my sojourn here, a strong turn has been taken towards transcendental idealism and a certain subjectivism, along with a simultaneous thrusting to the forefront of metaphysical issues treated in this way and, moreover, certain changes in the treatment of the phenomenological method, espoused mainly by Heidegger, who’s regarded here as a very able philosopher. He’s now – that is, a few months ago – published a very extensive (over 400 pages) paper entitled Sein u. [und] Zeit [Being and Time], about which I’d already told you in Lviv. It’s one of two papers contained in Volume VIII of [Philosophical] Yearbook. In addition, there’s also a work by Oskar Becker[O3] , entitled Mathematische Existenz [Mathematical Existence] in which the author deals primarily with Hilbert[O4] ’s position. Just today, Niemeyer sent me Volume VIII, so what I’m writing here is based on solid information. Over the next few days I’ll apply myself to reading. At the moment I’m occupied with my ‘work on literature’, on which subject I started writing, in German, in Lviv. In this connexion I’m reading a new book by Rudolf Odebrecht[O5]  entitled Grundlegung einer aesthetischen Werttheorie [Foundations of an aesthetic theory of value], Reuther & Reichard, Berlin, 1927, in which the author refers to Husserl’s ‘Idea’, nota bene while strongly Kantifying it and emphasising the idealistic position much more strongly than it emerges in Husserl’s text. But it’s an interesting book. In addition, I’ve discovered a whole series of papers and books. Among others, Ms Conrad-Martius [O6] published an article in the journal Der philosophische Anzeiger [The philosophical gazette] (which I once mentioned to you), entitled ‘Die Zeit’ [Time]. In addition, an article by Hering[O7] , polemicising against Schestow [sic – Shestov] (I just don’t remember if this is the correct spelling)[O8]  on the subject of phenomenology, is supposed to be included. Schestow once published a number of articles in Revue philosophique [Philosophical review] against phenomenology which then seem to have been published separately. Well, Hering polemicises with him, while also citing some statements from Essentiale Fragen. ‒

When I have more time, I’ll write at greater length concerning what I learn from Husserl about his current papers. Nota bene, evidently a publication of his in the field of logic is nearing completion. But I’ll find out in greater detail only from Husserl himself. At the moment I’m writing mainly to send my address, in case you need it. Of course, I’ll be glad if you wouldn’t mind dashing off a few lines to me. I know, though, how short of time you are. Probably you’ll be leaving shortly for Warsaw for the Congress.

Because I’d like the Theory of Cognition Section to continue its activity, I’m announcing, in order to facilitate formal procedures, my resignation from the position of chairman, and I hope that the new chairman will soon promote vibrant activity so that the Section functions this year as well.

For now, I’m sending you expressions of profound and genuine esteem, and once again my cordial thanks for supporting my request for funding for this so very valuable and necessary trip abroad.

Copy of approval the resolution of the Faculty Council written 28.02.1925