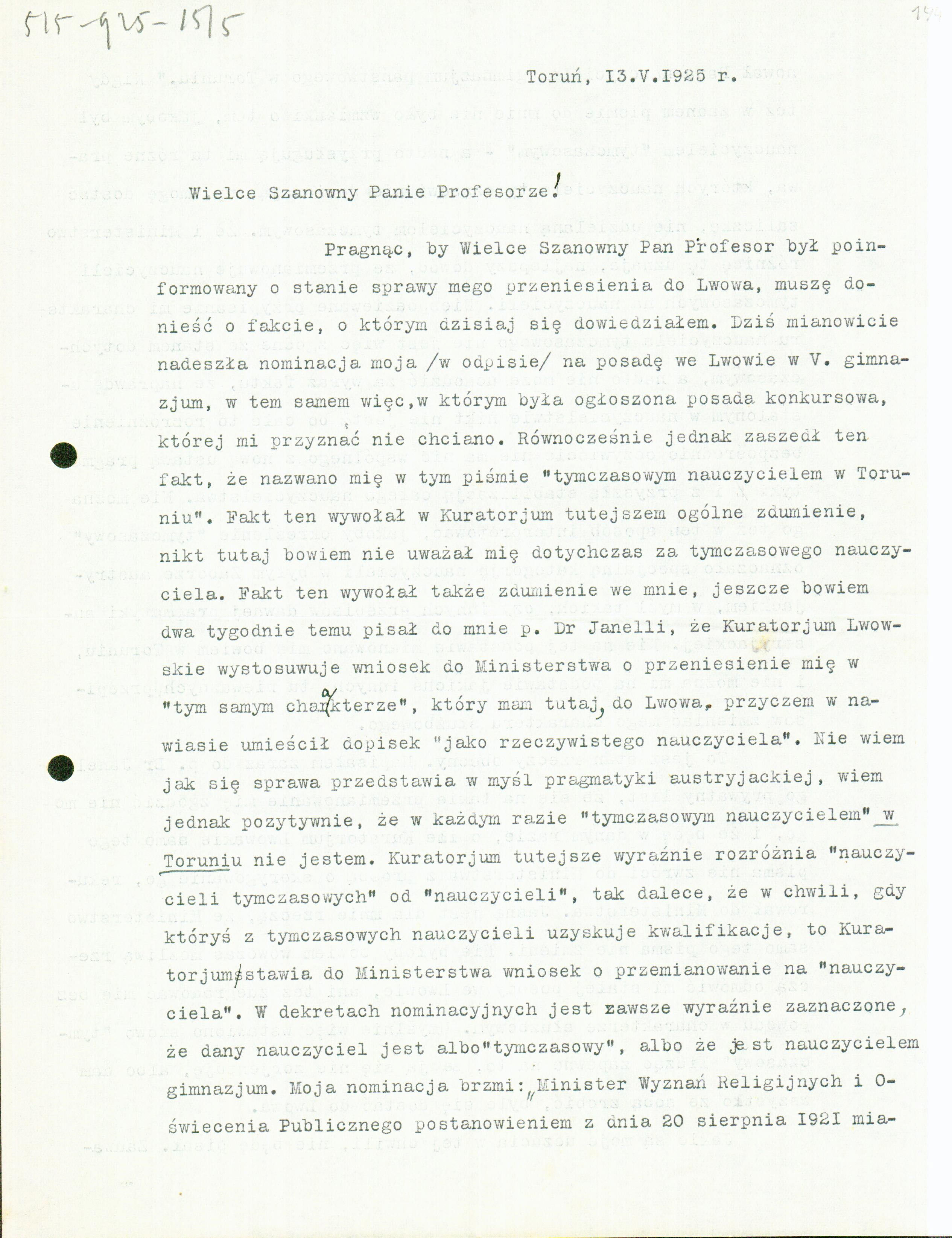 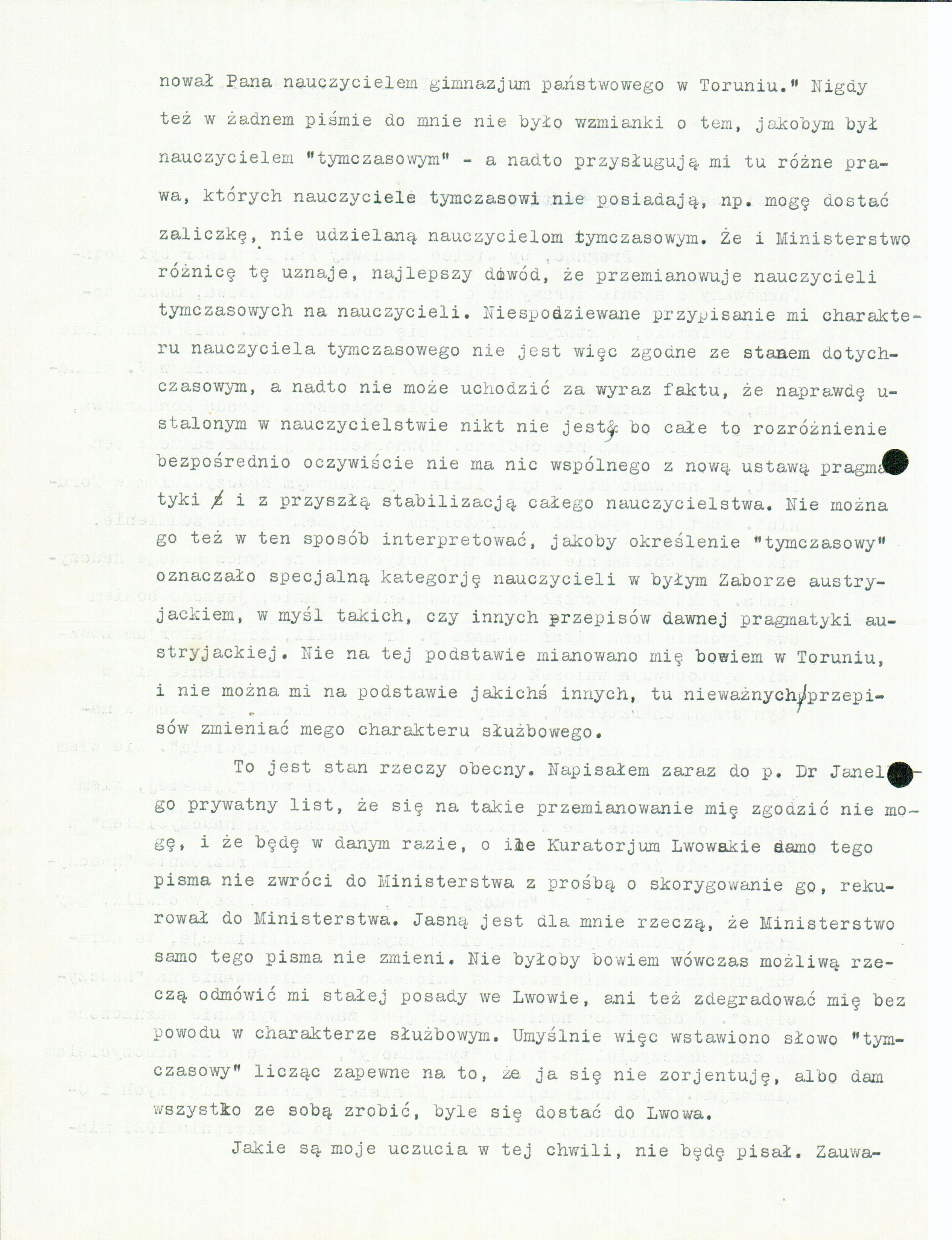 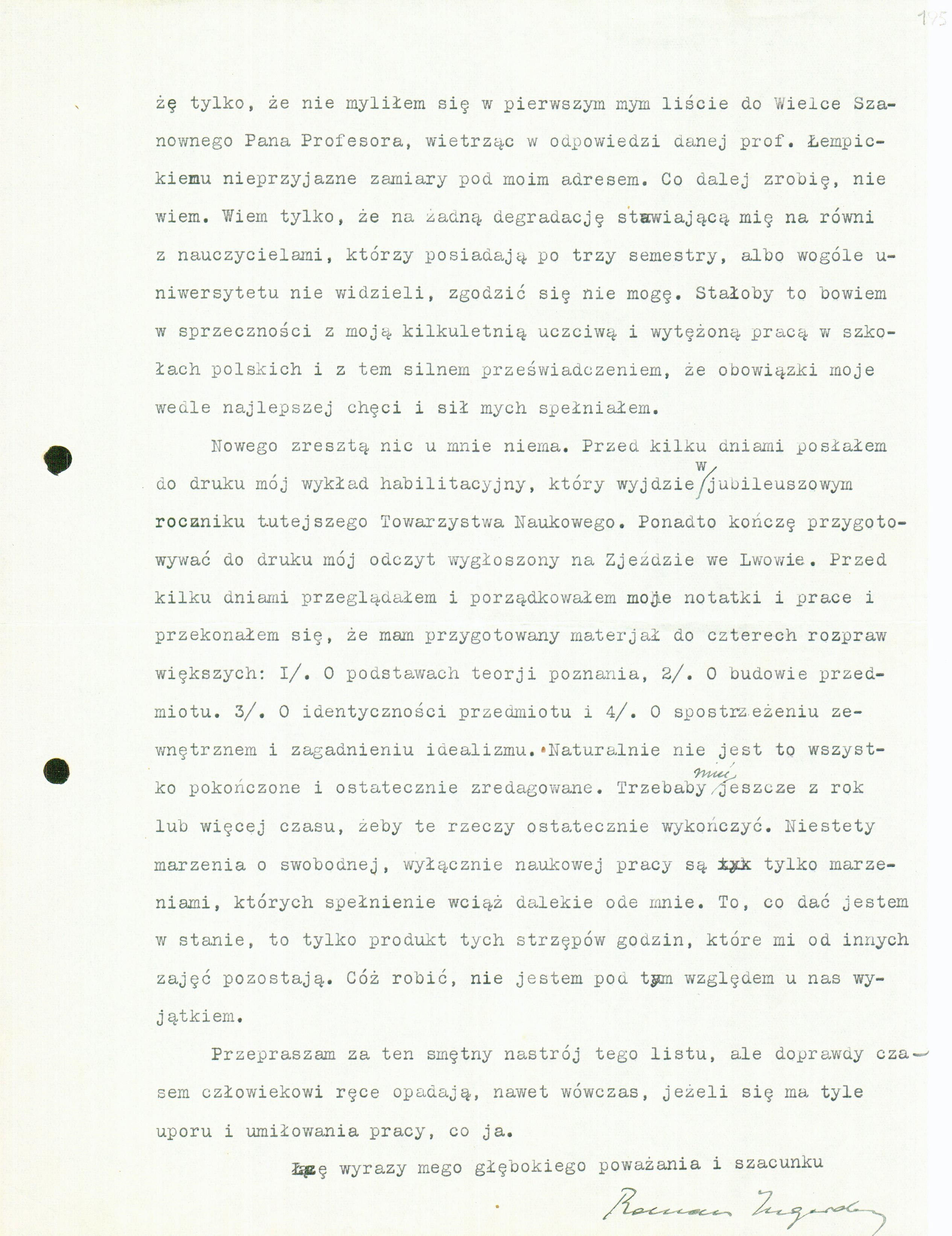 Wishing you to be informed about the status of my relocation to Lviv, I have to report something I found out today. Namely, today (in an enclosure), my appointment to the position in Lviv in middle school no. 5 arrived – the same school, therefore, in which the position to be awarded via competition, which nobody wanted to award me, had been announced. At the same time, however, I was struck by the fact that I was identified in this document as ‘a temporary teacher in Toruń’. This evoked general astonishment at the local Board, as heretofore nobody here has regarded me as a temporary teacher. It evoked astonishment in myself as well, especially since two weeks ago, Dr Janelli wrote to me that the Lviv Board was applying to the Ministry for transferring me to Lviv at ‘the same professional level’ as here, meanwhile placing in brackets the note ‘as a bona fide teacher’. I don’t know how the matter looks in the light of Austrian regulations, but I know for certain that, in any case, I’m not a ‘temporary teacher’ in Toruń. The local Board clearly distinguishes ‘temporary teachers’ from ‘teachers’, to the point that, at the moment when one of the temporary teachers acquires qualifications, it’s the Board who applies to the Ministry for him to be reclassified as a ‘teacher’. In the appointment documents, it’s always clearly specified that a given teacher is either ‘temporary’ or is a middle-school teacher. My appointment reads: ‘The Minister of Religious Denominations and Public Education, on the basis of a decision of 20 August 1921, has appointed you a teacher of the state middle school in Toruń’. Never, moreover, in any document addressed to me, has there been any mention of my being a ‘temporary’ teacher – and moreover, I have various rights here which temporary teachers don’t have; e.g. I can receive advances on salary, which are not given to temporary teachers. The best proof that the Ministry also recognises this distinction is that it re-designates temporary teachers as teachers. My unexpected assignment at the level of a temporary teacher is therefore inconsistent with my status to date, and moreover cannot be regarded as an expression of the fact that nobody is truly established in the teaching profession, since, of course, none of these distinctions have anything to do directly with the new regulations or with the future stabilisation of the profession. Nor can it be interpreted to mean that the term ‘temporary’ indicated a special category of teachers in the former Austrian partition, in accordance with such-and-such provisions of the former Austrian regulations, for it wasn’t on that basis that I was appointed in Toruń, and my professional level can’t be altered on the basis of another set of rules which aren’t valid here.

This is the status of the matter at present. I immediately wrote a private letter to Dr Janelli, to the effect that I cannot consent to such a redesignation, and that in this situation, unless the Lviv Board itself turns to the Ministry with a request to correct it, I’m going to complain to the Ministry. It’s clear to me that the Ministry itself is not going to change the document, for in that case it wouldn’t be possible to refuse me a permanent position in Lviv, nor to demote me in terms of professional level without any reason. Thus the word ‘temporary’ was inserted intentionally, probably on the assumption that I wouldn’t notice it, or that I’d do anything in order to get to Lviv.

What my feelings are at the moment, I won’t say. I’ll only note that I wasn’t mistaken in my first letter to you, when I detected unfriendly intentions aimed at me in the reply given to Prof. Łempicki. I don’t know what more I can do. I know only that I can’t agree to any demotion putting me on the same level with teachers who’ve had three semesters or haven’t set foot in the university at all. This would be inconsistent with my years of honest and arduous work in Polish schools and with the strong conviction that I’ve carried out my duties with the best will and strength.

Otherwise, there’s nothing new with me. A few days ago, I sent my habilitation lecture, which is going to be issued in the jubilee yearbook of the local Scientific Society, to be printed. In addition, I’m completing preparations for the printing of the lecture I gave at the Congress in Lviv. A few days ago I was reviewing and ordering my notes and papers and convinced myself that I have material prepared for four larger dissertations: 1) On the foundations of the theory of cognition, 2) On the construction of the object, 3) On the identity of the object, and 4) On external perception and the issue of idealism. Naturally, not all of this is completed and edited in final form. Another year or more would be necessary to ultimately finish these things. Unfortunately, dreams of free and exclusive original work in philosophy are only dreams whose fulfilment is still far in the distance. What I’m able to give is only the product of these shreds of hours I have left over from other tasks. What can I do about it? In this regard, here in Poland, I’m no exception.

I apologise for the dismal mood of this letter, but really, there are times when a man throws up his hands, even if he’s as obstinate and fond of his work as I am.

I enclose expressions of my profound esteem and respect