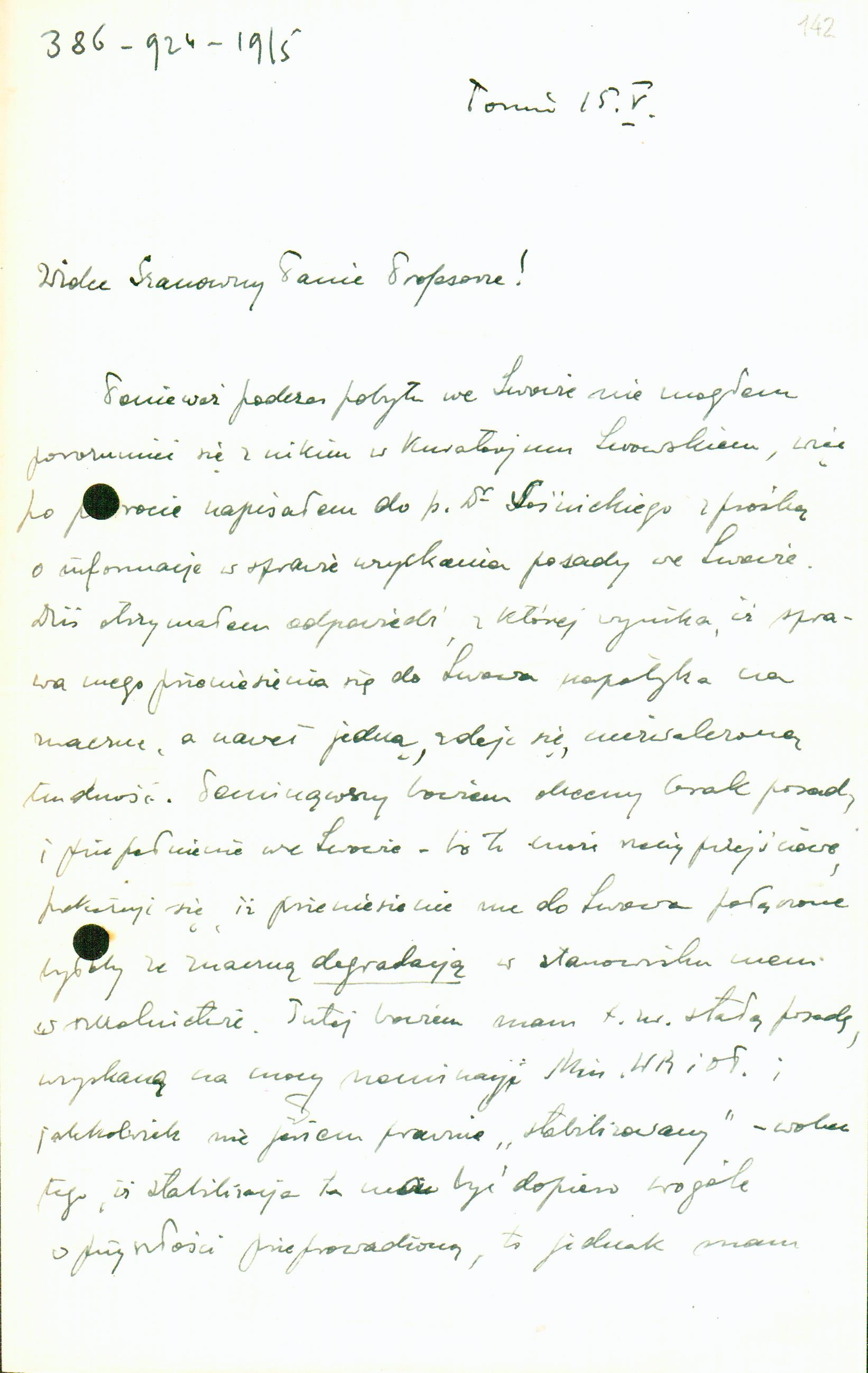 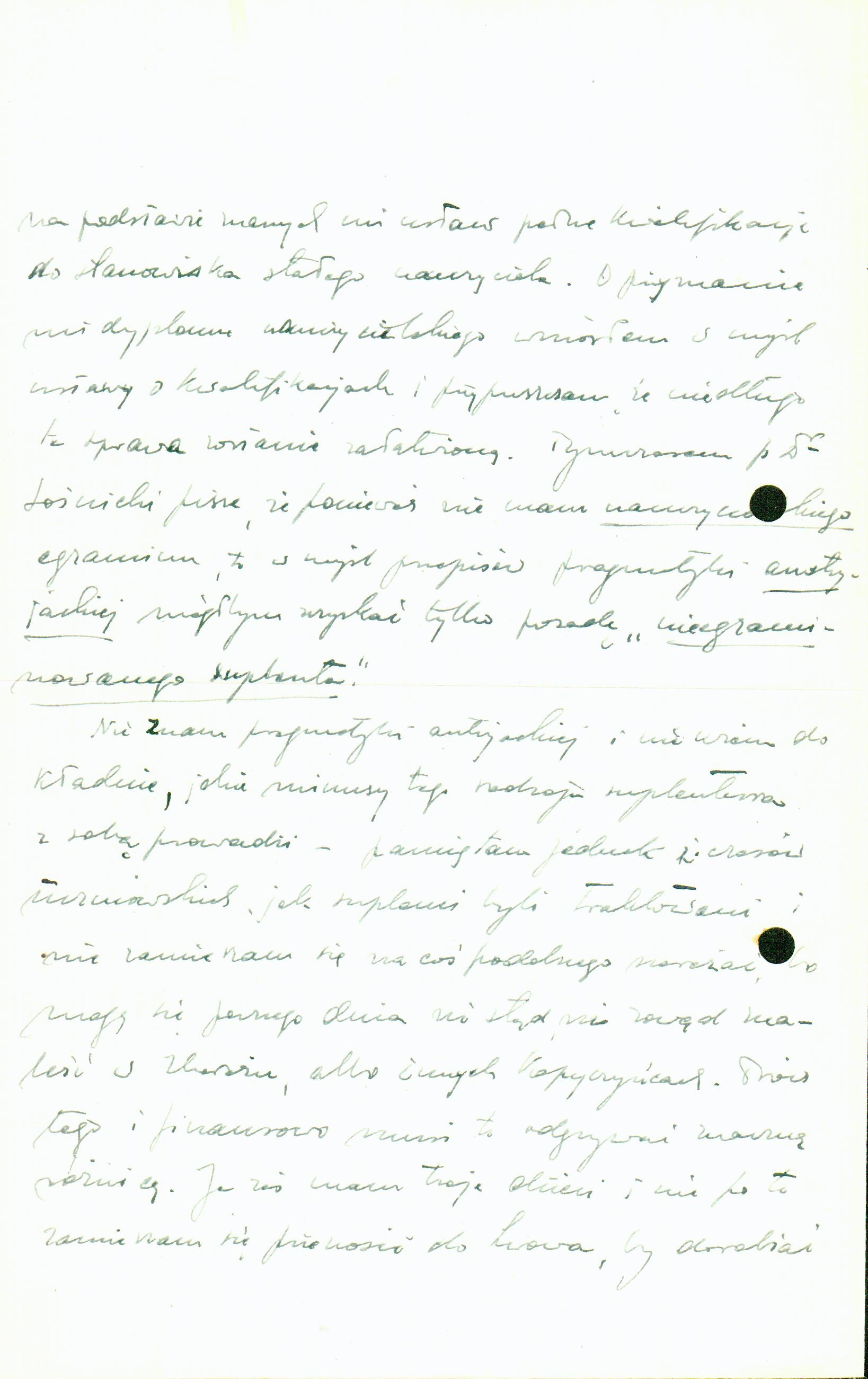 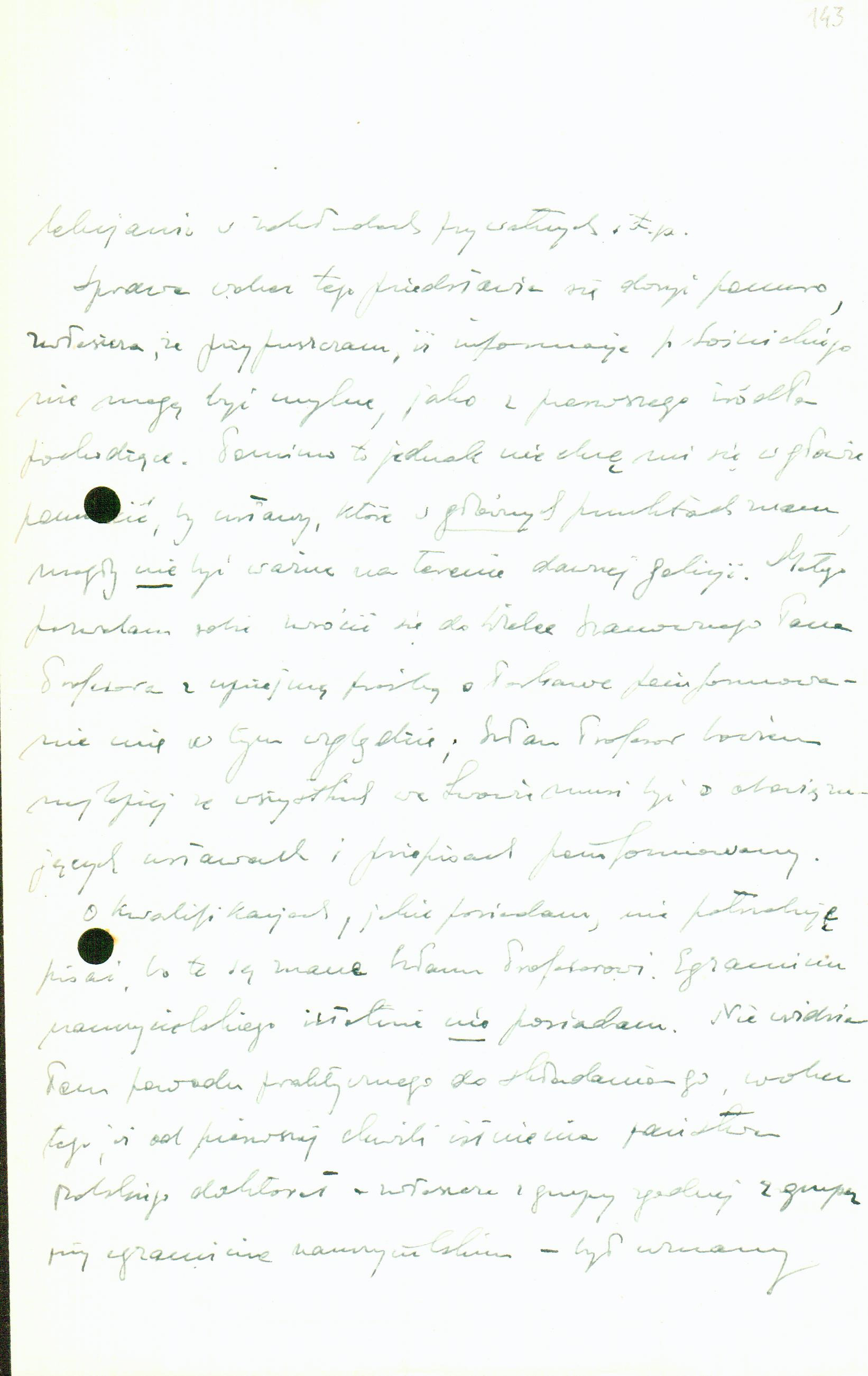 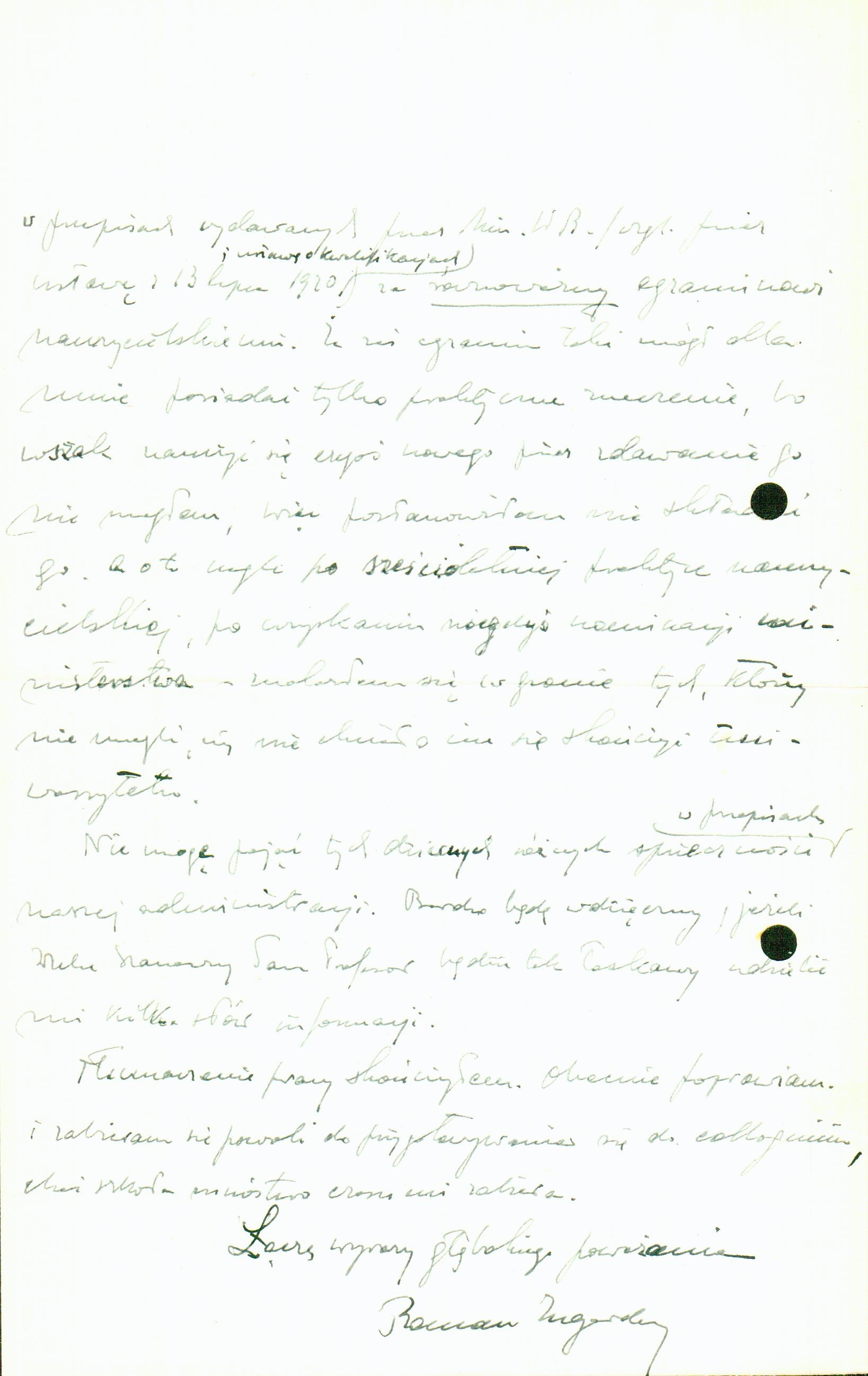 Since, during my stay in Lviv, I was unable to communicate with anyone on the Lviv Board, I wrote upon my return to Dr Sośnicki[O1]  with a request for information on obtaining a position in Lviv. Today I received a response, from which it appears that the matter of my relocating to Lviv would encounter significant difficulties, one of them seemingly even insurmountable. Putting aside the current dearth of positions and overcrowding in Lviv, since these may be transient things, it turns out that my relocation to Lviv would entail a significant demotion in terms of my educational position. Here, I have a so-called permanent position, obtained on the strength of a nomination by the Ministry of Religious Denominations and Public Education, and although I’m not legally ‘stabilised’ – in view of the fact that this stabilisation is supposed to be carried out only in the future ‒ I possess, on the basis of the laws with which I’m familiar, full qualifications for the position of permanent teacher. On the subject of being awarded a teacher’s diploma, I’ve based my conclusions on the regulations concerning qualifications, and suppose that this matter will be settled soon. Meanwhile, Dr Sośnicki writes that, because I haven’t passed the teacher’s exam, I’d be able, in accordance with the provisions of Austrian law, to obtain only the position of a ‘non-examined substitute’.

I’m not familiar with Austrian law and I don’t know exactly what kind of minuses go with this sort of substitute teaching – I remember, however, from my student days, how the substitutes were treated and I have no intention of exposing myself to something like that, because one day I might suddenly find myself in Zbarazh or Kopychyntsi [i.e. in the hinterlands]. In addition, it must make a significant financial difference. But I have three children, and have no intention of relocating to Lviv only to supplement my income with private lessons and so on.

In this light the situation looks rather gloomy, especially since I don’t suppose that Mr Sośnicki’s information can be mistaken, as it comes direct from the source. In spite of this, however, I’m not inclined to believe that the laws, the main points of which I’m familiar with, may not be valid in the region formerly known as Galicia. Thus I’m taking the liberty of turning to you with a polite request for gracious enlightenment in this regard, since you, more than anyone in Lviv, must be informed about the laws and regulations in force. I don’t need to write here about the qualifications I possess, as these are known to you. I don’t have the teacher’s exam. I saw no practical reason to take it, in view of the fact that, from the first moment of the existence of the Polish state, a doctoral degree ‒ especially from a group consistent with the group with the teacher’s exam ‒ was acknowledged in the regulations issued by the Ministry of Religious Denominations (or by the Act of 13 July 1920 and the law concerning qualifications) as equivalent to the teaching exam. Thus, since the exam could only have practical significance for me – since, after all, I wouldn’t learn anything new from passing it – I decided not to take it. And here, suddenly, after six years of teaching practice, after having obtained a ministry appointment – I’ve found myself among those who couldn’t or didn’t want to finish university.

I can’t grasp these assorted strange contradictions in our administration’s regulations. I’d be very grateful if you’d be so gracious as to share a bit of information with me.

I’ve finished the translation of the paper. At present I’m correcting it and am slowly undertaking preparations for the colloquium, although school is taking up a great deal of my time.