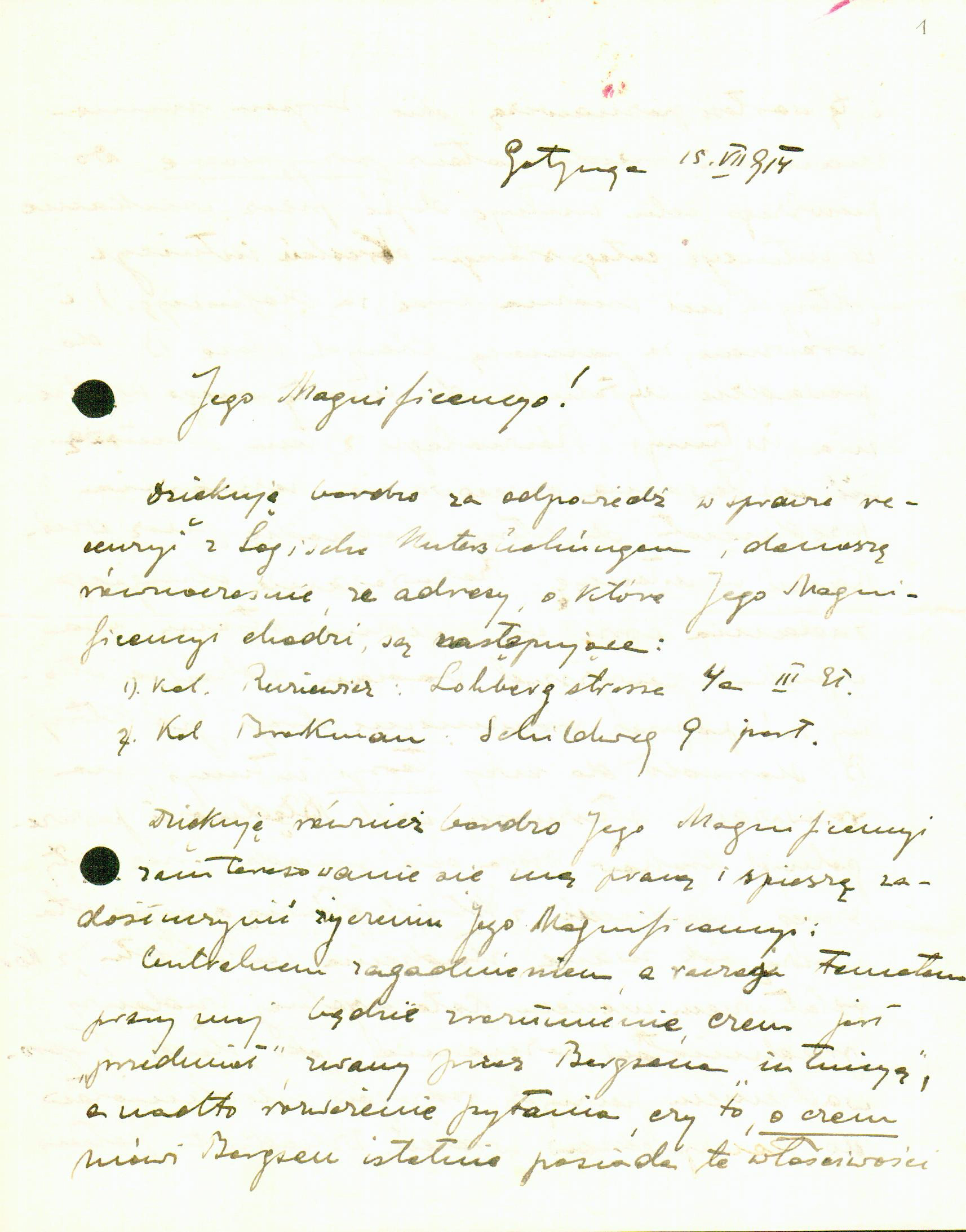 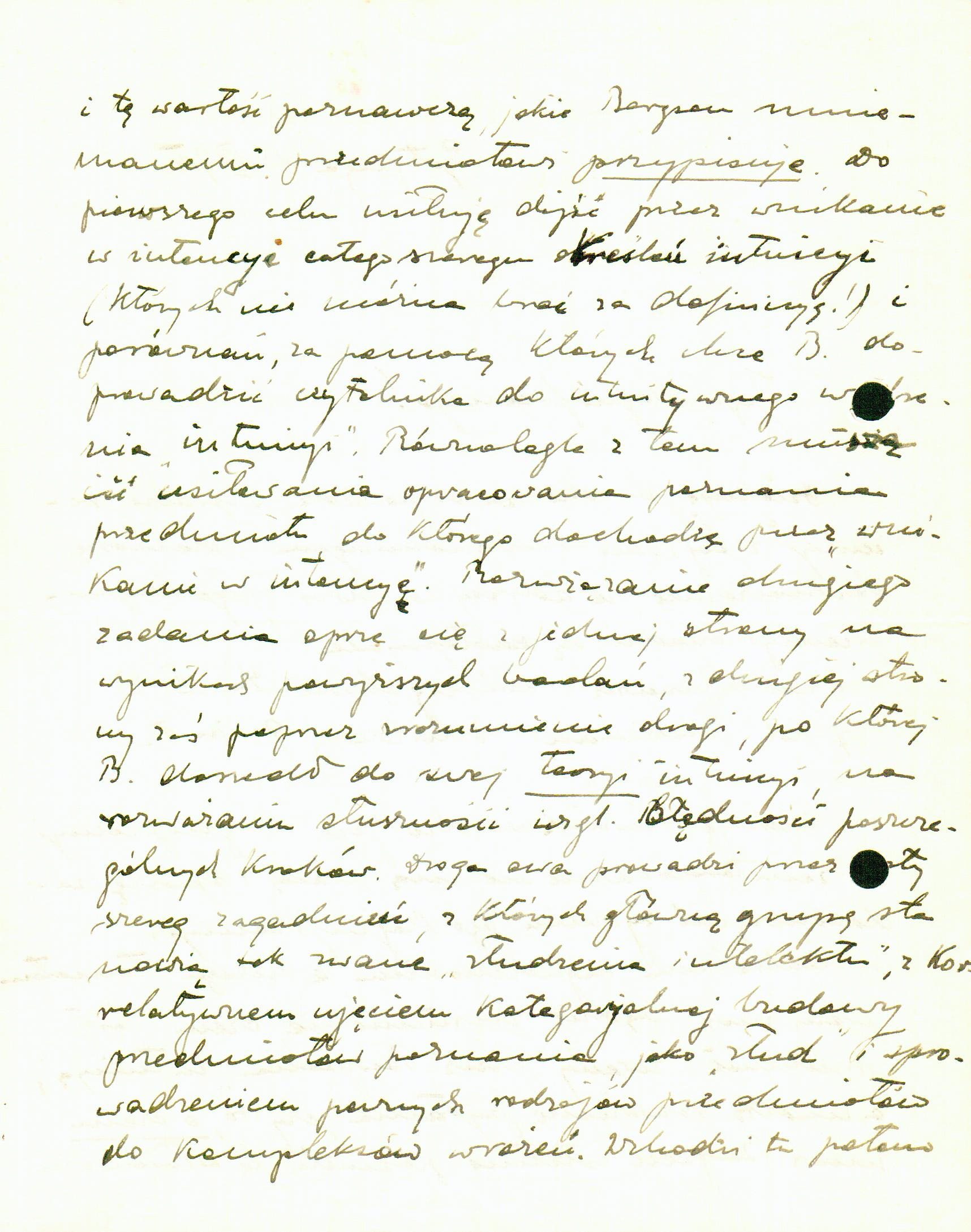 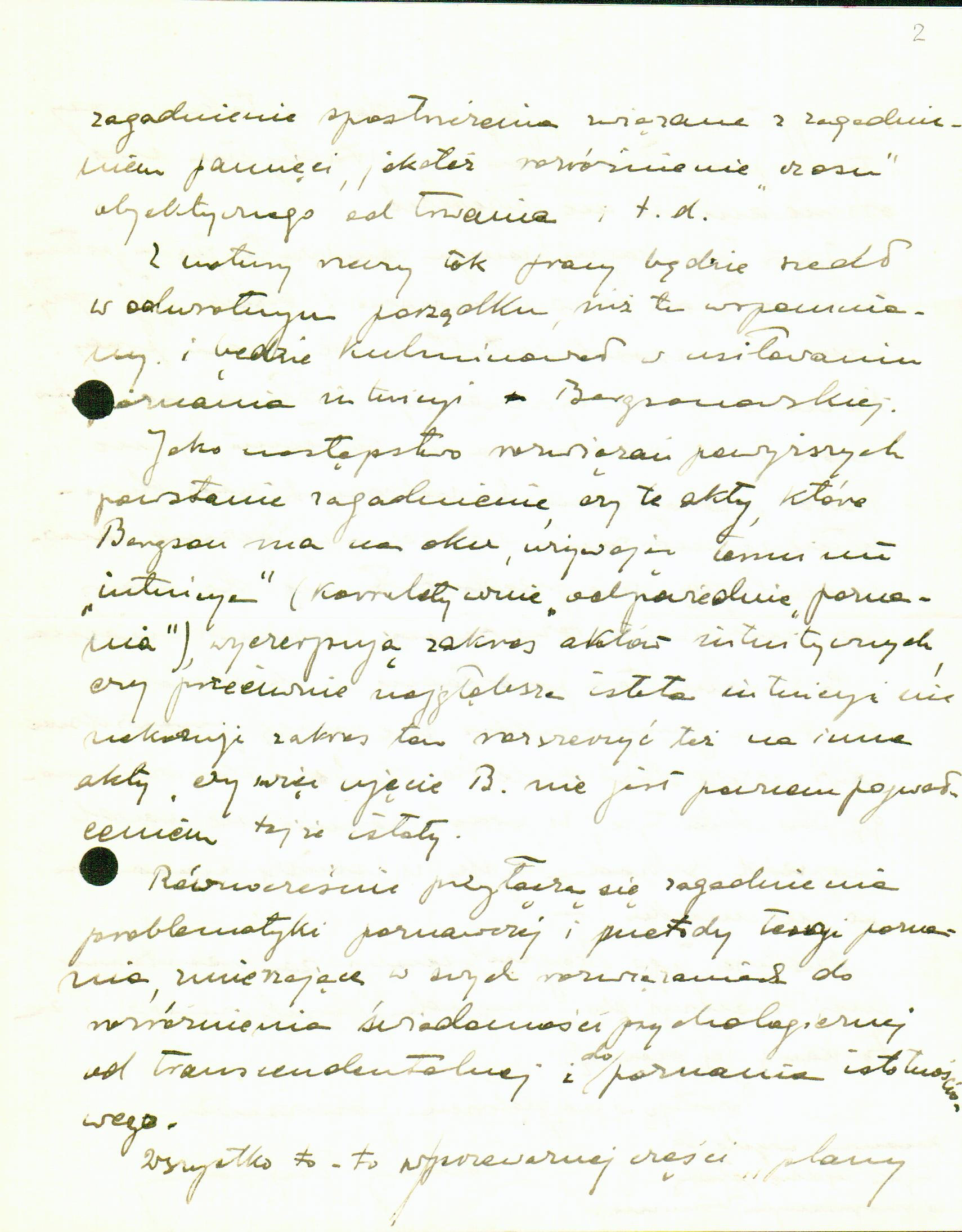 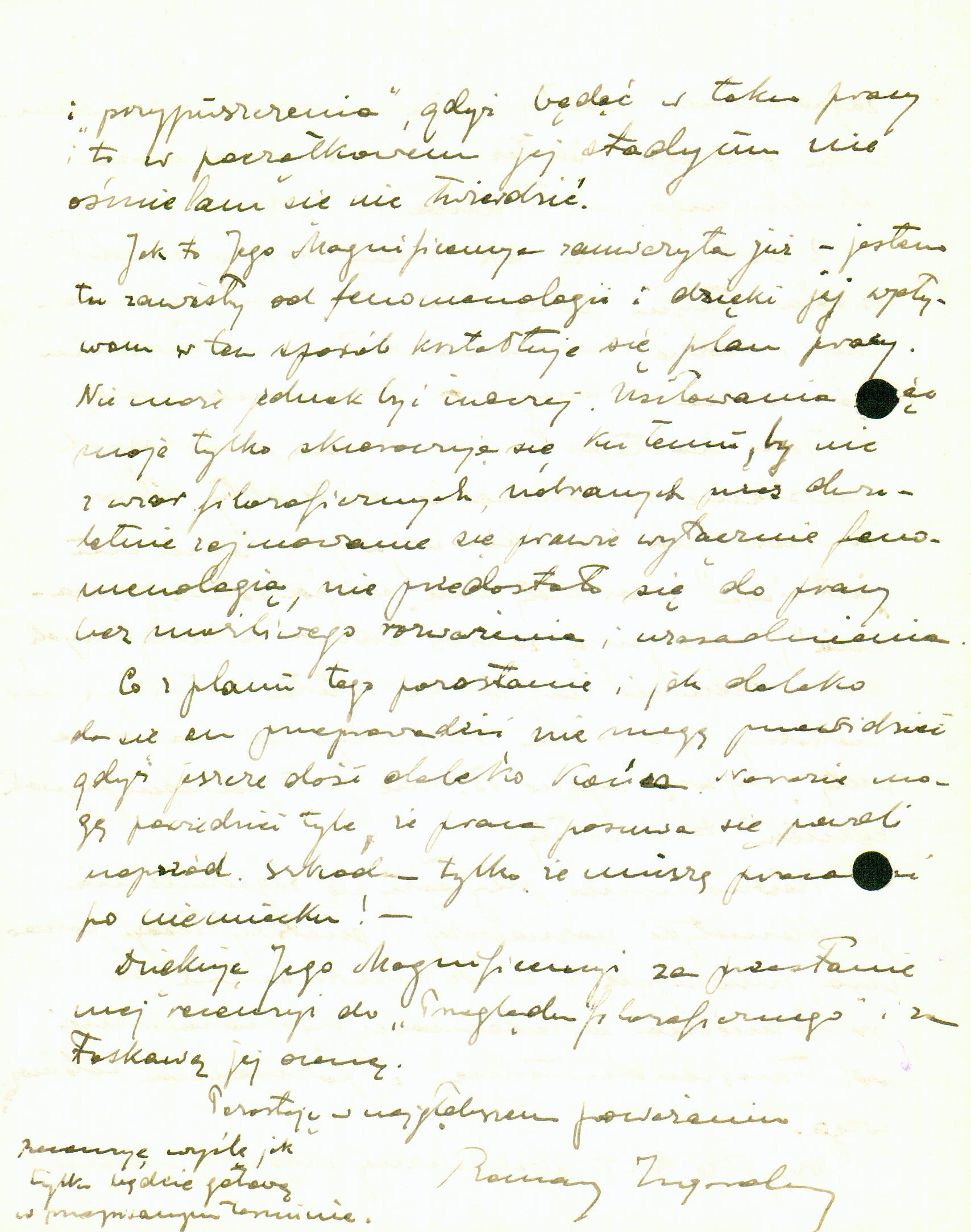 Thank you very much for your response in the matter of the review of Logische Untersuchungen [Logical Investigations (Husserl)]; at the same time, the addresses Your Magnificence is concerned with are as follows:

As well, I thank Your Magnificence very much for Your interest in my work and I hasten to satisfy Your wishes:

The central issue, or rather the theme, of my paper will be an understanding of what the ‘subject’ (which Bergson calls the ‘intuition’) is, and also to consider the question of whether, as Bergson says, it essentially possesses the properties and the cognitive value he attributes to the presumed subject. I’m trying to attain my first objective by penetrating into the intentions behind a whole series of intuition-related terms (which are not to be taken as a definition[O3] !) and comparisons, with the help of which B. wishes to lead the reader to an intuitive view of ‘intuition’. Parallel to this, there must be attempts to elaborate cognition of the subject, at which I’ll arrive by way of ‘penetration into intuition’. The solution of the second task will be based on one hand on the results of the above-mentioned studies, on the other on understanding the path by which B. arrived at his theory of intuition and on consideration of its validity given the erroneous nature of particular steps. This path leads through a whole series of issues, of which the chief group constitutes the so-called ‘illusions of the intellect’, with a correlative approach to the categorical construction of objects of cognition as ‘illusions’ and the introduction of certain types of subjects into complexes of sensations. The issue of observation in relation to the issue of memory arises here, along with the distinction between objective ‘time’ and duration, and so on.

As a result of the nature of things, the paper will proceed in an order which is the reverse of the one given here and will culminate in an attempt to comprehend Bergsonian intuition.

As a consequence of these solutions, the following issue arises: whether the acts that Bergson has in mind when he uses the term ‘intuition’ (corresponding to ‘cognition’) exhaust the range of intuitive acts, or whether, on the contrary, the most profound essence of intuition requires this range to be extended to other acts, and whether B.’s approach is not a certain violation of this essence.

At the same time, the issues of cognitive problems and methods of the theory of cognition merge, aiming, in their solutions, at the differentiation of psychological awareness from transcendental and at the cognition of essence [Wesenserkenntnis].

All of this is, for the most part, ‘plans’ and ‘conjectures’, since, since I’m still in the process of working, specifically at the initial stage, I don’t dare to make any declarations.

As Your Magnificence will have already noticed, I’m depending on phenomenology here, thanks to whose influence the plan of my paper is taking this form. However, it cannot be otherwise. Therefore, my attempts are directed towards making sure that nothing deriving from the philosophical beliefs acquired through two years of occupying myself almost exclusively with phenomenology will find its way into the paper without being weighed and justified.

What will remain of the plan and how far it can be carried out is something I can’t foresee, since it’s still quite far from completion. As of now I can say only that the paper is slowly moving forward. It’s just a pity that I have to work in German! ‒

I thank Your Magnificence for sending my review to Philosophical Review and for Your gracious evaluation.

I remain, with the most profound esteem,

I’ll send the review as soon as it’s ready, within the prescribed time.

Application for a reduction in hours written n/d