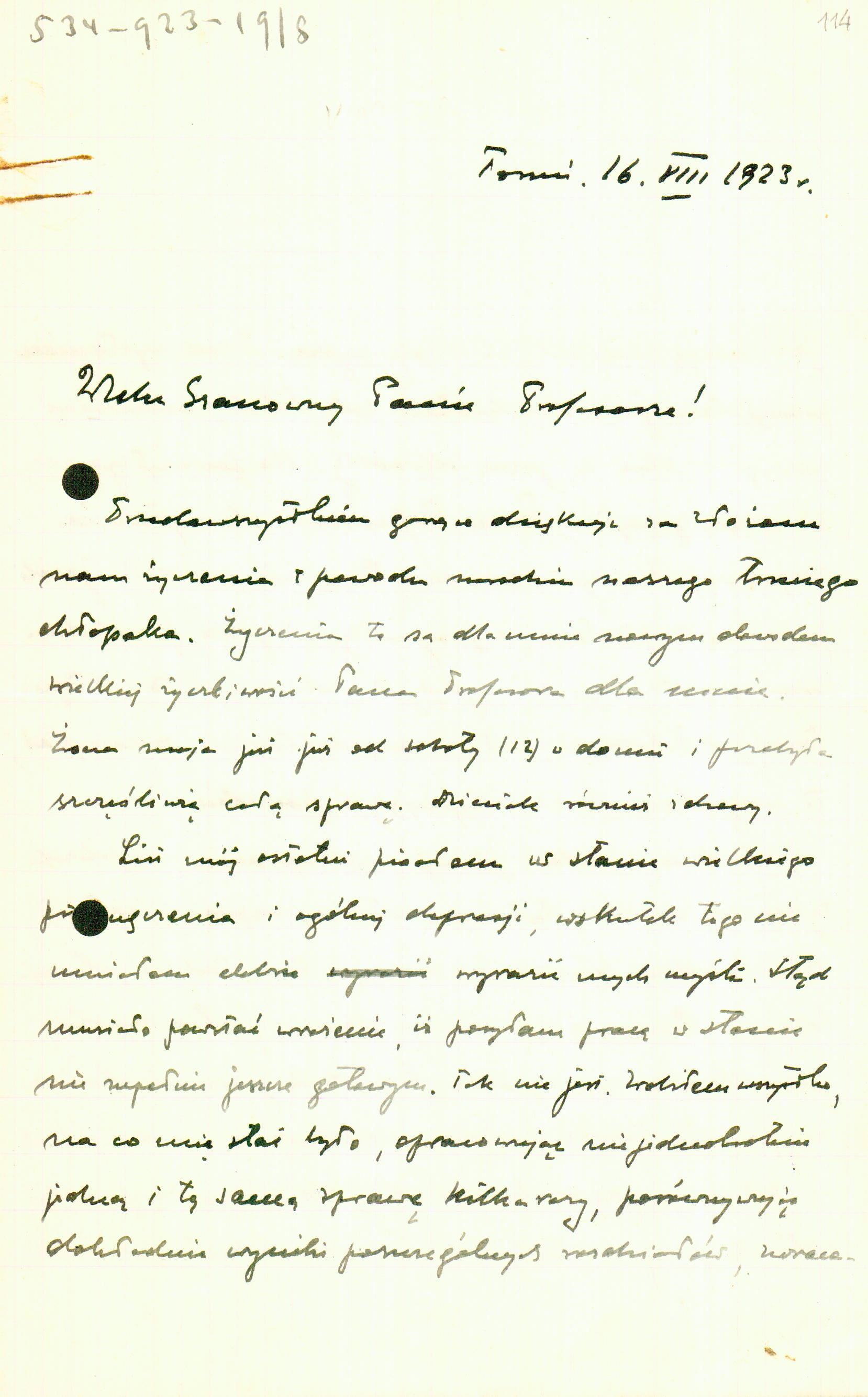 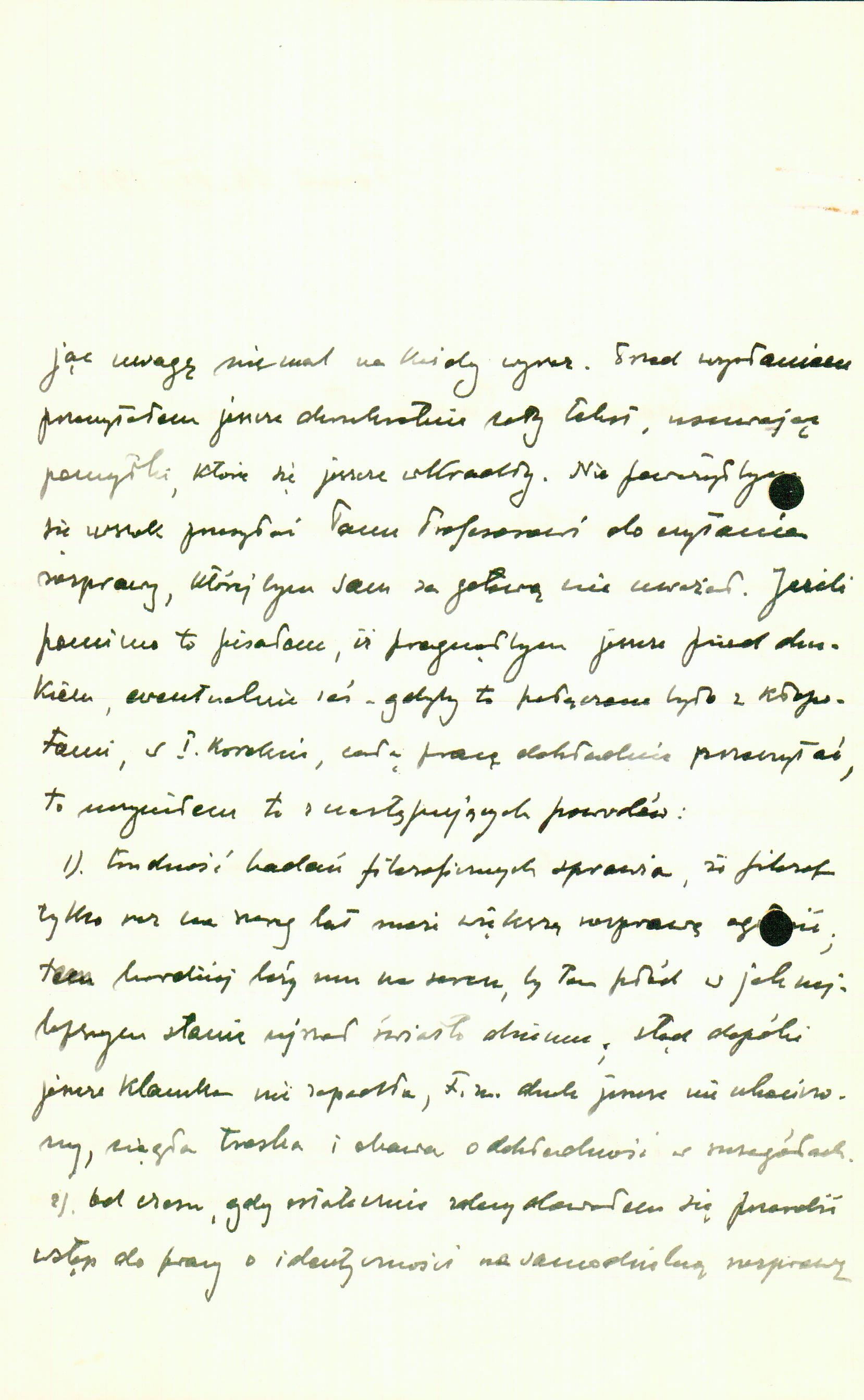 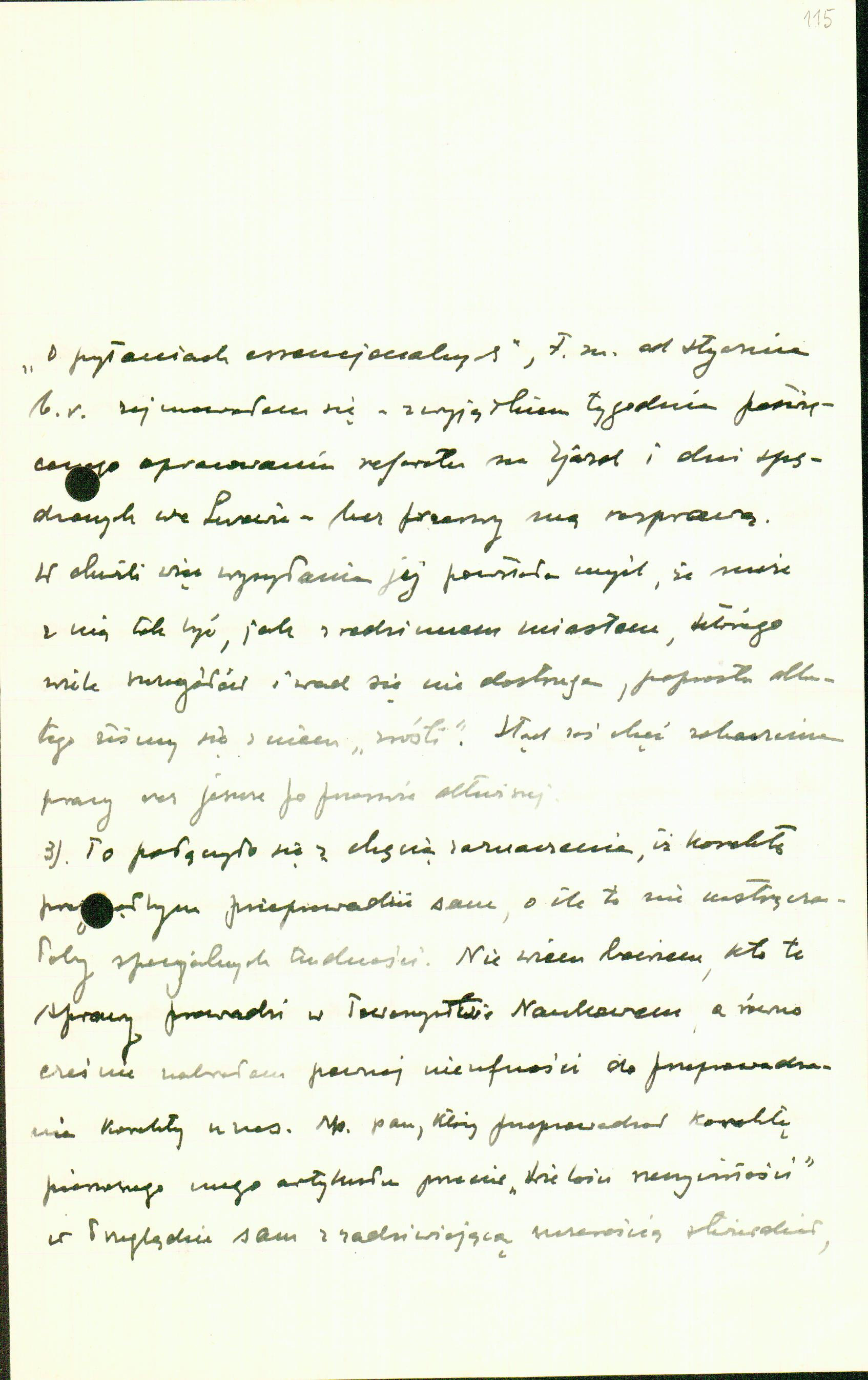 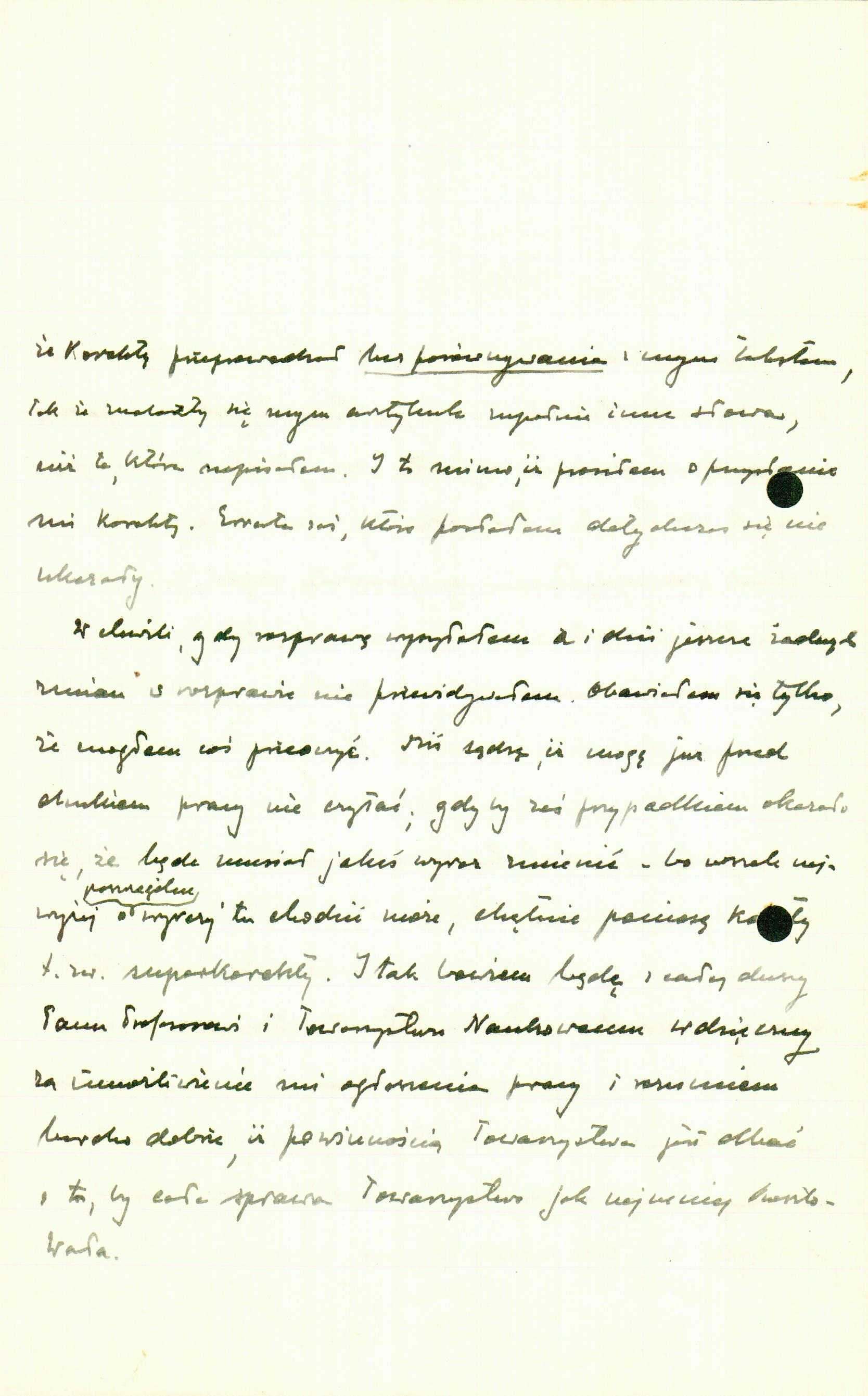 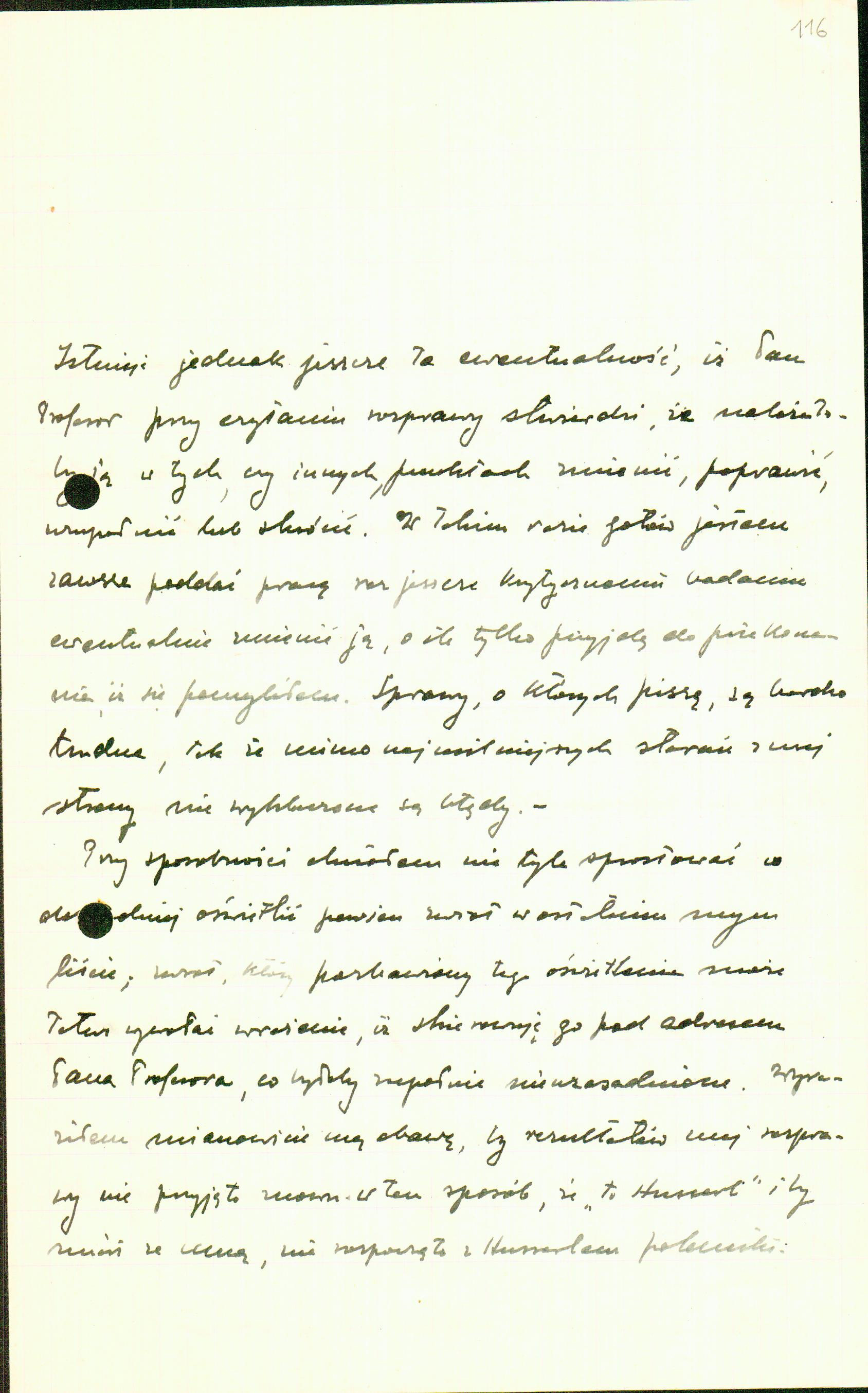 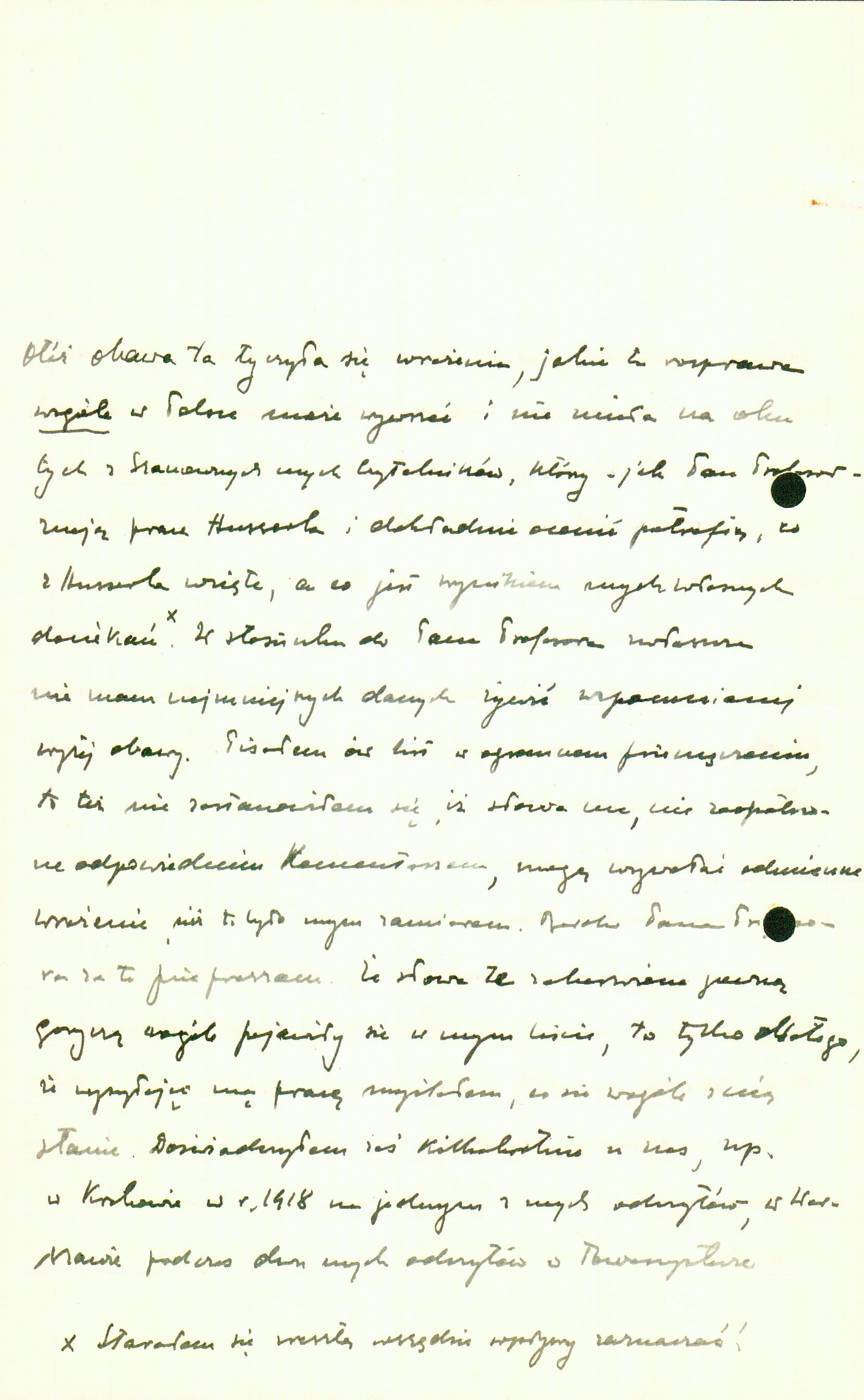 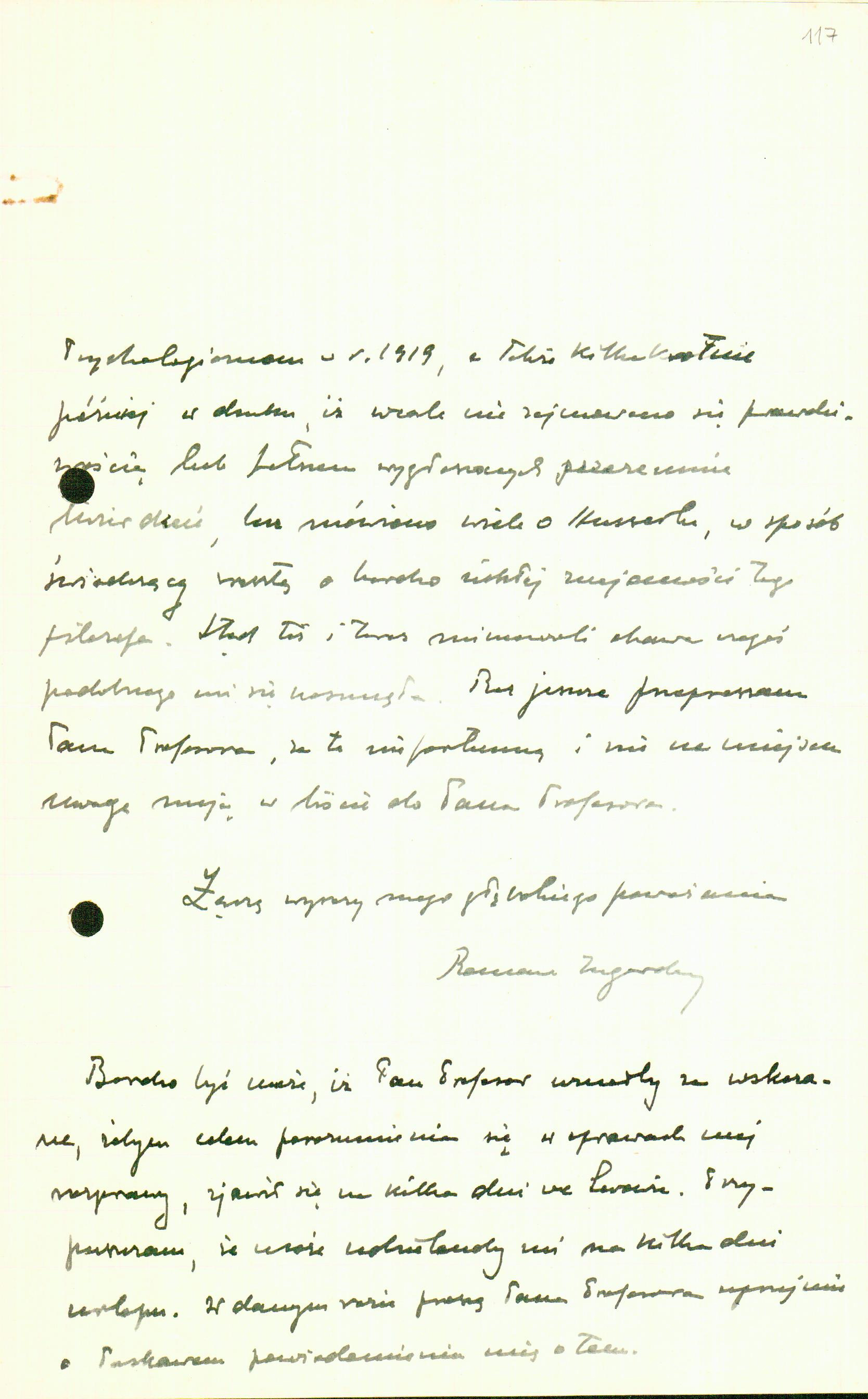 First of all, I fervently thank you for your wishes on the birth of our third boy. These wishes are, for me, new evidence of your great kindness to me. My wife’s already been home since Saturday (the 12th) and got through the whole thing in good shape. The baby’s also healthy.

I wrote my last letter in a state of great exhaustion and general depression, as a result of which I was unable to express my thoughts clearly. This must have been the source of the impression that I was sending the paper in a state of less than full readiness. That’s not the case. I’ve done everything I could afford to do, more than once developing the same issue several times, carefully comparing the results of individual chapters, paying attention to practically every word. Before sending it, I read the entire text two more times, removing the remaining errors that had crept in. After all, I wouldn’t dare to send you a dissertation to read which I myself didn’t consider ready. If, nevertheless, I wrote that I’d like once more before printing, to possibly ‒ if it were connected with problems in the first round of proofs ‒ read the entire paper thoroughly, I did so for the following reasons:

1) the difficulty of philosophical research means that a philosopher is able to publish a major dissertation only once every few years; all the more it means to him to have this embryo see the light of day in the best possible condition; thus, until the final whistle has blown, i.e. until the completion of the printing process, there is constant concern and anxiety about the correctness of the details.

2) since the moment I finally decided to convert the introduction to the paper on identity into the independent dissertation ‘On Essential Questions’, i.e. since January of this year, I’ve been occupied without a break ‒ with the exception of the week dedicated to preparation of the paper for the Congress and the days spent in Lviv ‒ with my dissertation. Thus, at the time I sent it out, the thought arose that the same thing might happen to the dissertation as with one’s home town ‒ the many details and flaws of which pass unobserved, simply because we’ve ‘grown up’ along with it. Hence the desire to see the paper once again, following a more extended break.

3) This was combined with the desire to indicate that I’d like to make corrections myself, unless this would present special difficulties. I don’t know who in the Scientific Society sees to these matters; however, I’ve developed a certain distrust regarding the correction process here in Poland. For example, the gentleman who did the corrections for my first article against Wielości rzeczywistości [A plurality of realities] in [Philosophical] Review remarked with astonishing honesty that he had done the corrections on the proofs without comparing them with my text, so that my article contained words completely different to those I wrote. And that happened even though I asked the proofs to be sent to me. Meanwhile, the errata I sent has not yet appeared.

Neither at the moment I sent the dissertation nor today did I anticipate any changes in the dissertation. I was simply afraid that I might have missed something. As of today, I don’t think I need to read the paper prior to printing; if by chance it turns out that I have to change something ‒ since, after all, it’s a question, at most, of particular words ‒ I’ll gladly bear the costs of the so-called super-corrections. And so I’m grateful to you and to the Scientific Society with all my soul for enabling me to publish my paper, and I understand very well that the Society’s responsibility is to make sure that the whole thing costs the Society as little as possible.

However, it’s also possible that, in reading the dissertation, you’ll find that it should be changed, corrected, supplemented, or shortened here or there. In that case, I’m always ready to subject the paper to a critical examination once again, or change it, provided I arrive at the conviction that I was mistaken. The matters I’ve written about are very difficult, so that despite the utmost efforts on my part, the occurrence of errors can’t be ruled out.

Given this opportunity, I wanted not only to rectify but also to shed light on a certain phrase in my last letter, a phrase that, deprived of this light, might easily give the impression that I’m directing it at you, which would be completely unjustified. Namely, I expressed my concern that the results of my dissertation would again be rejected because ‘that’s Husserl’ and that a polemic would be launched against Husserl instead of me. Well, this fear concerned the impression that this dissertation might make in Poland; it didn’t concern those of my Honoured Readers who, like you, know Husserl’s work and are capable of accurately judging what was taken from Husserl and what results from my own inquiries. (I’ve tried to indicate all influences throughout!) In relation to you in particular, I don’t have the slightest data with which to feed these fears. I wrote that letter in a state of enormous fatigue; it didn’t occur to me that my words, not being provided with appropriate comments, might make an impression other than the one I intended. I apologise to you for that. That those words, coloured with a certain general bitterness, appeared in my letter was only because, in sending my paper, I wondered what generally would become of it. I’ve experienced several times in Poland, e.g. in Cracow in 1918 at one of my lectures, in Warsaw during my two lectures at the Psychological Society in 1919, and also several times afterwards in print, that the truth or falsity of statements I made was not addressed at all, but much was said about Husserl, in a way that testified to very scant acquaintance with the work of that philosopher. Hence I’m again (now involuntarily) overwhelmed by a similar fear. Once again, I apologise to you for this unfortunate and misplaced remark of mine in my letter to you.

It may very well be that you’ll consider it advisable for me to come to Lviv for several days in order to discuss the question of my dissertation. I imagine that several days of leave might be granted to me. In such a case, I ask you to graciously let me know.