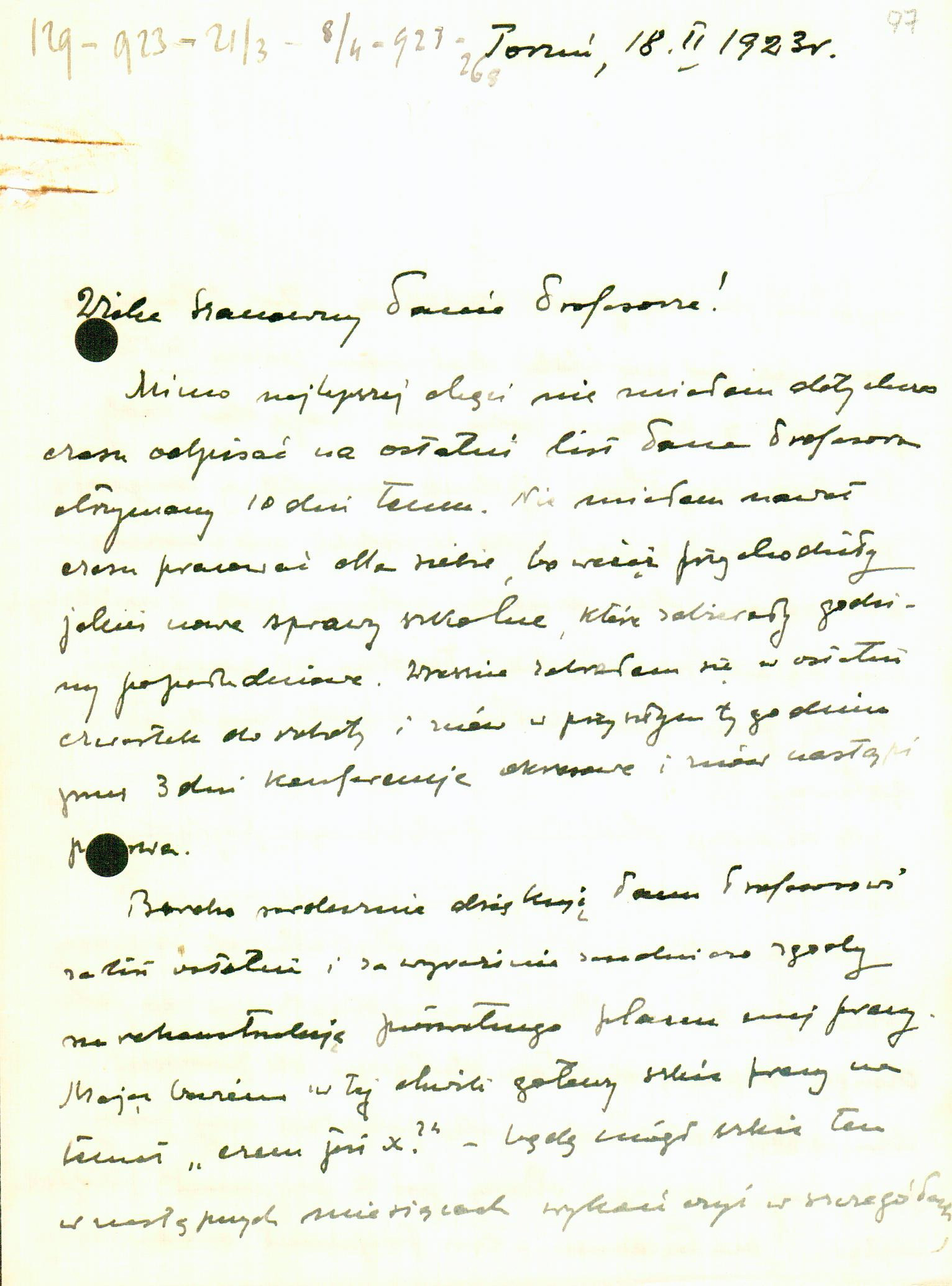 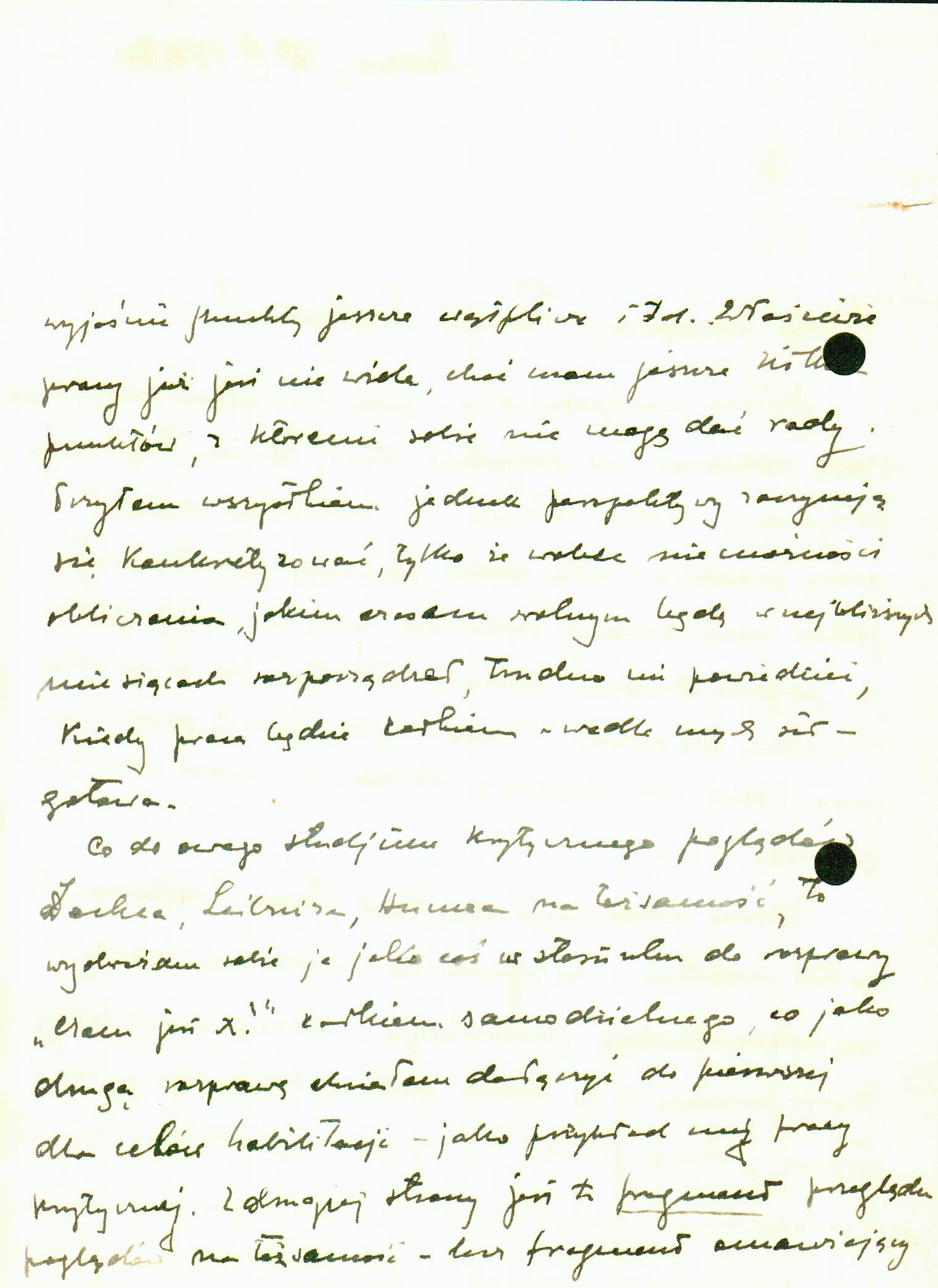 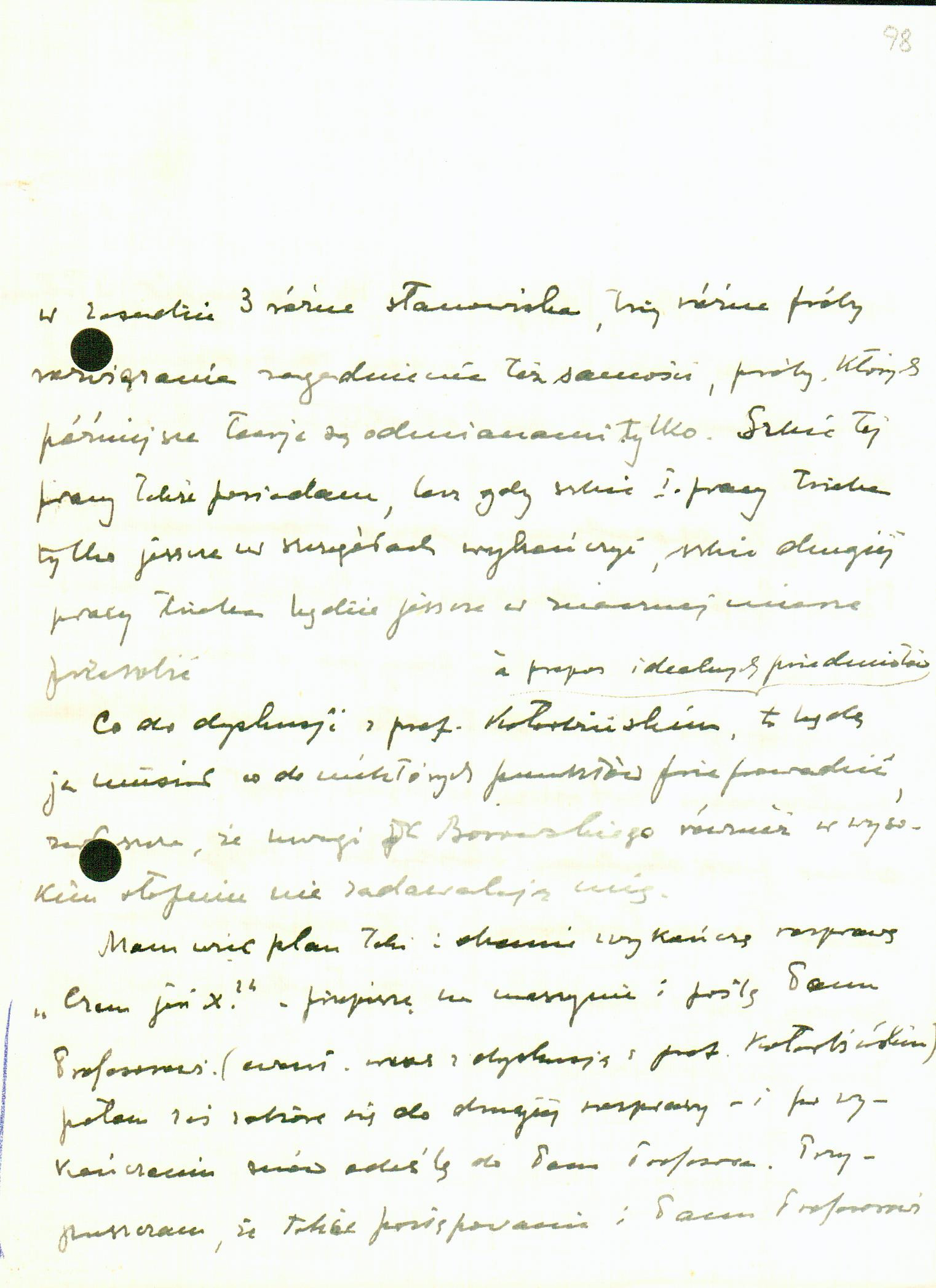 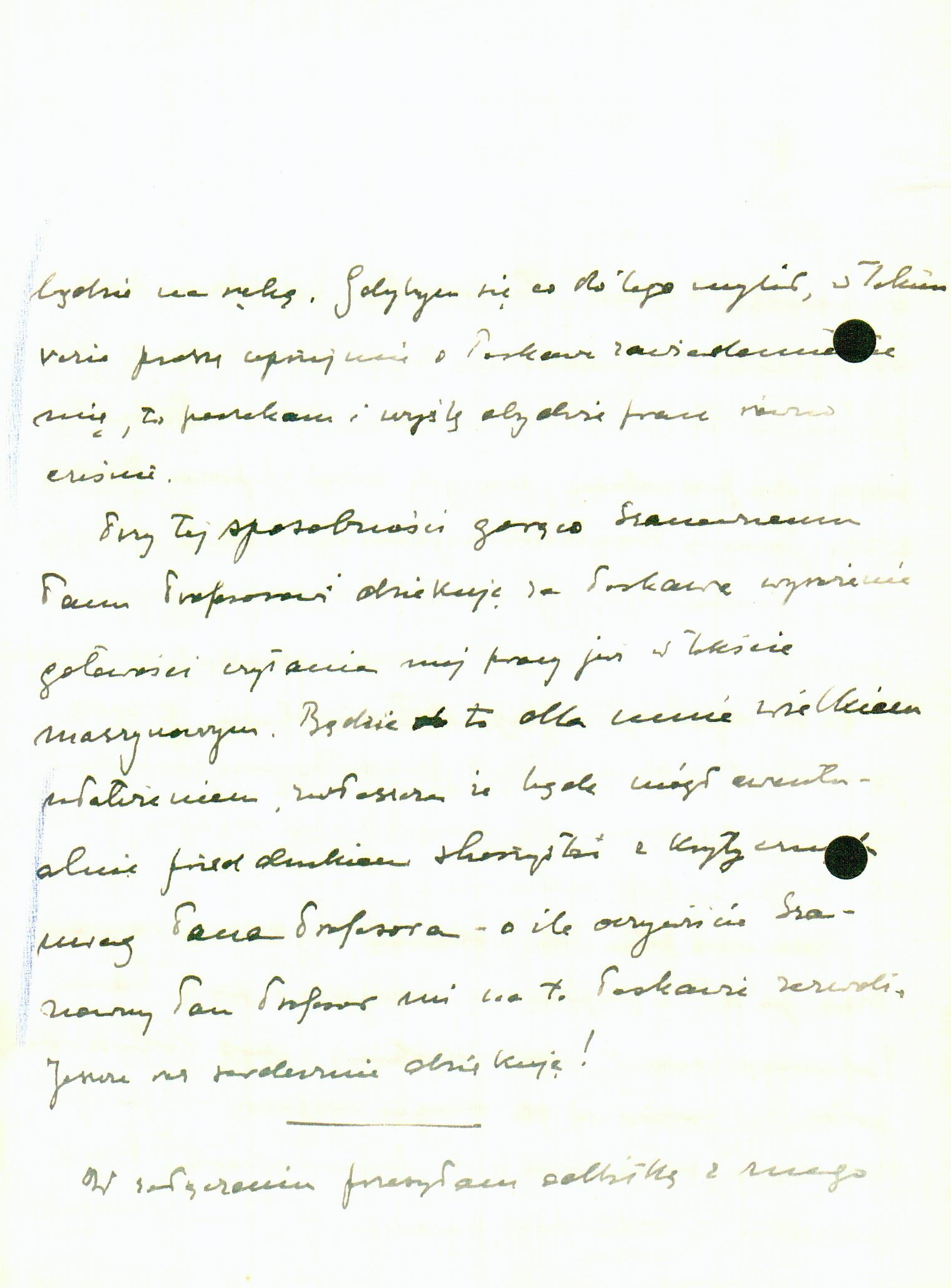 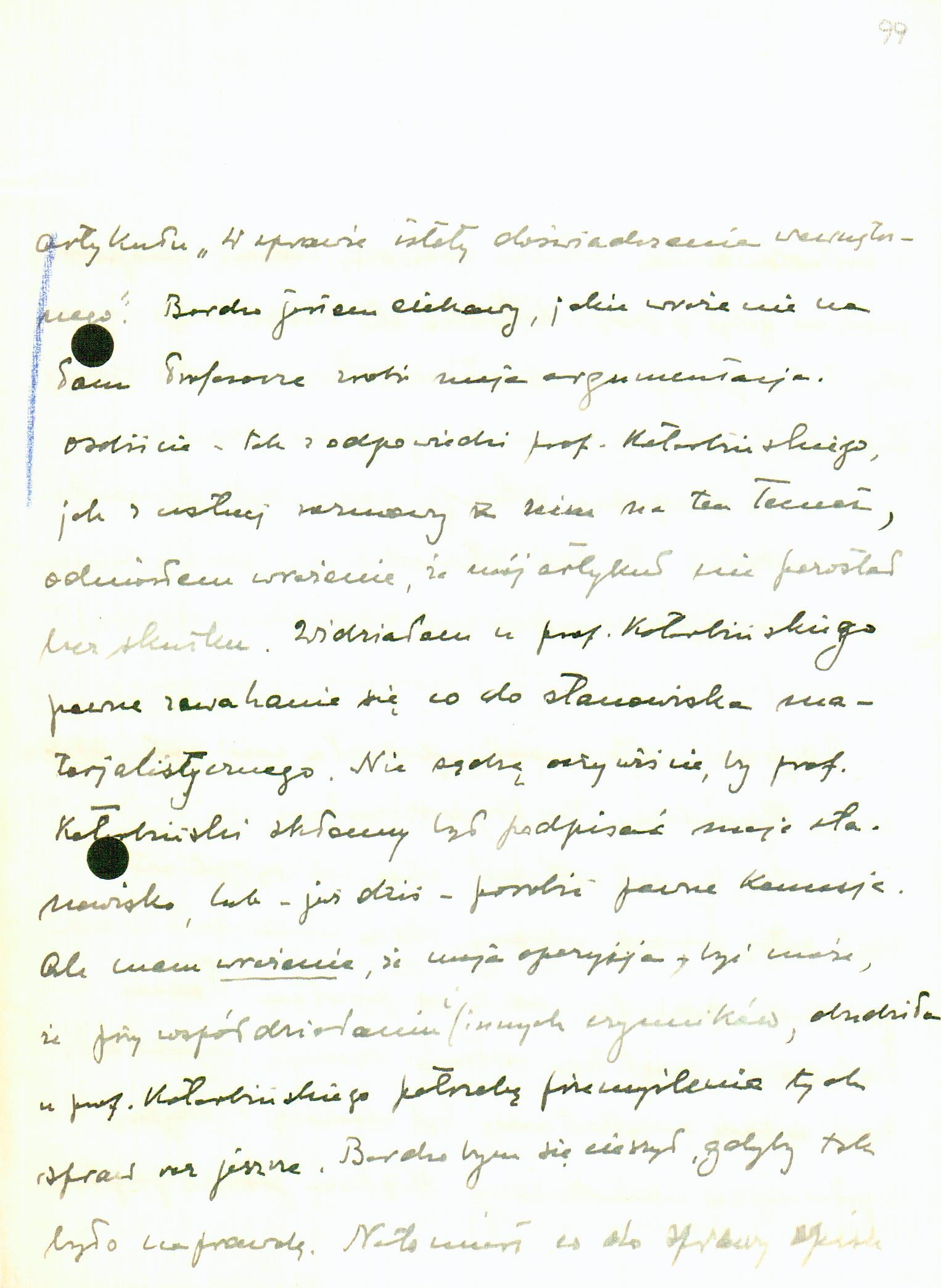 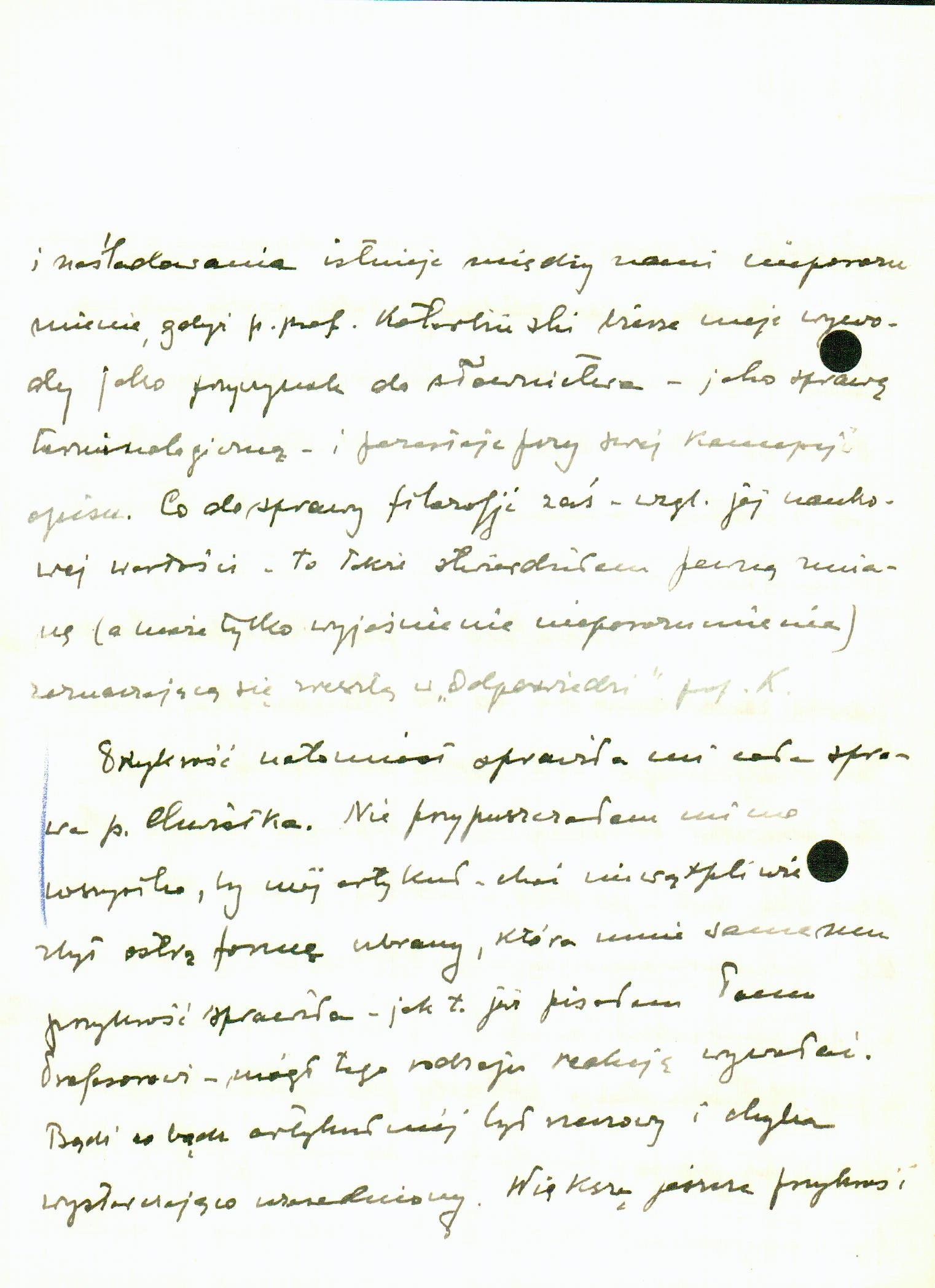 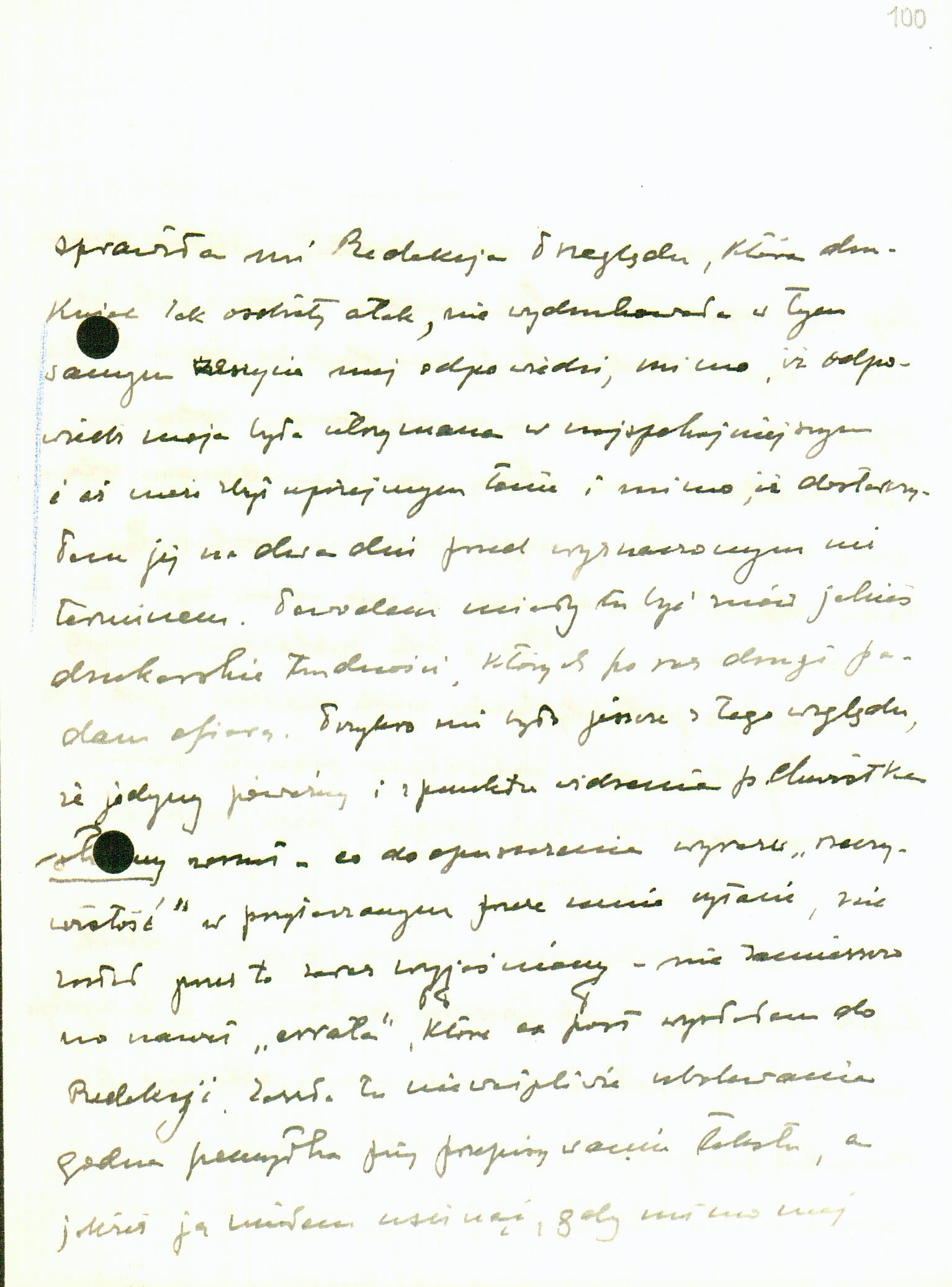 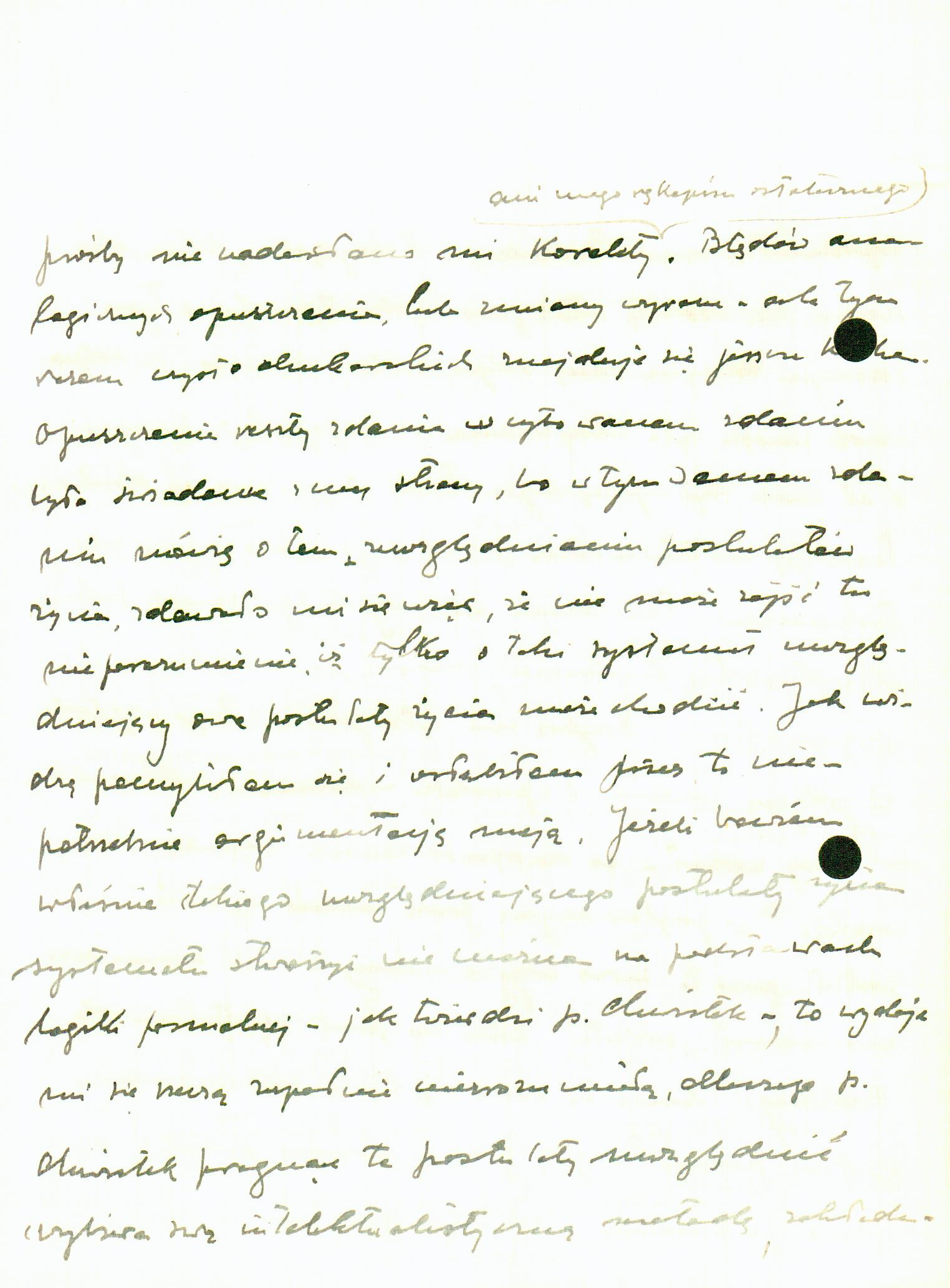 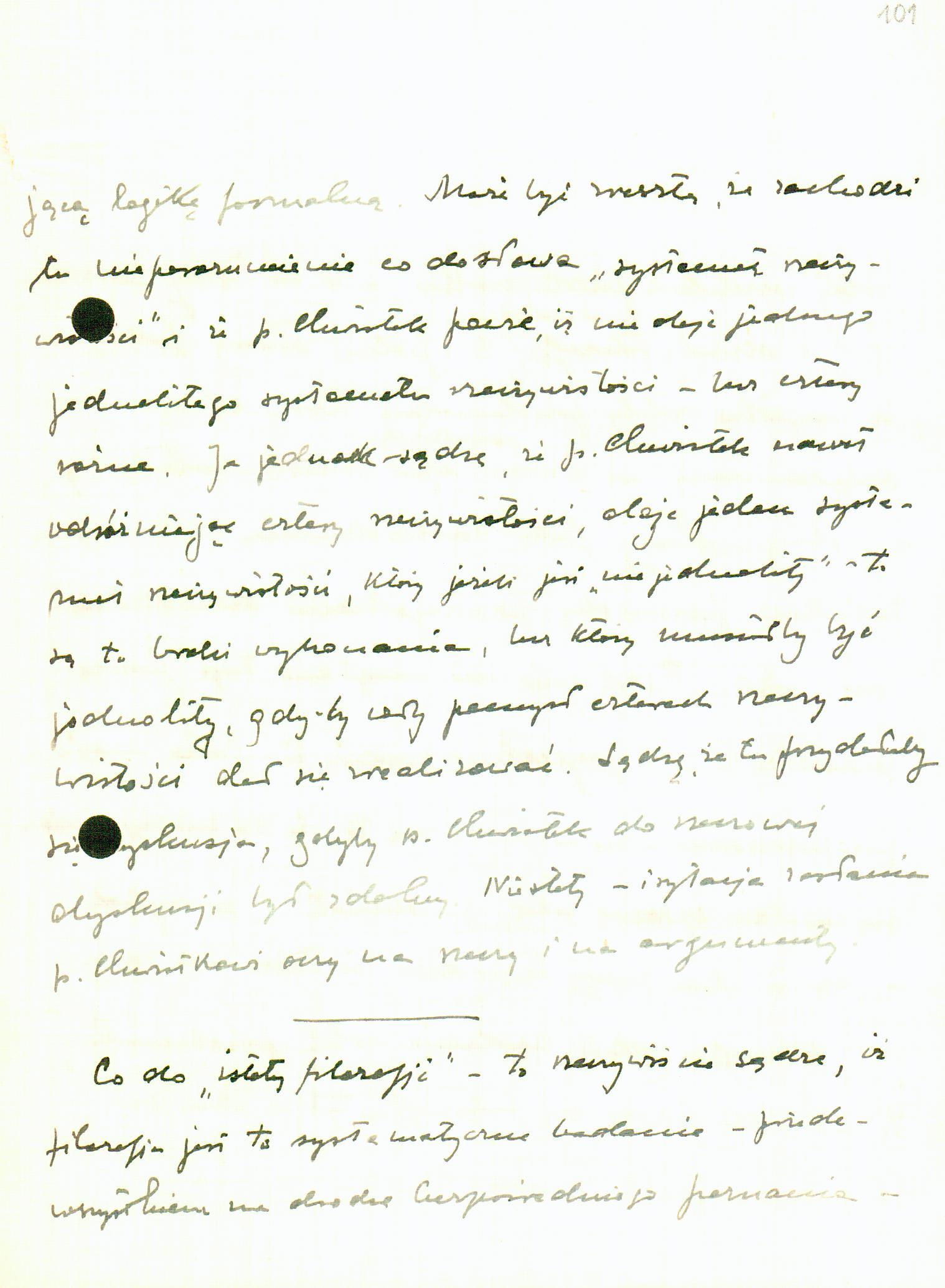 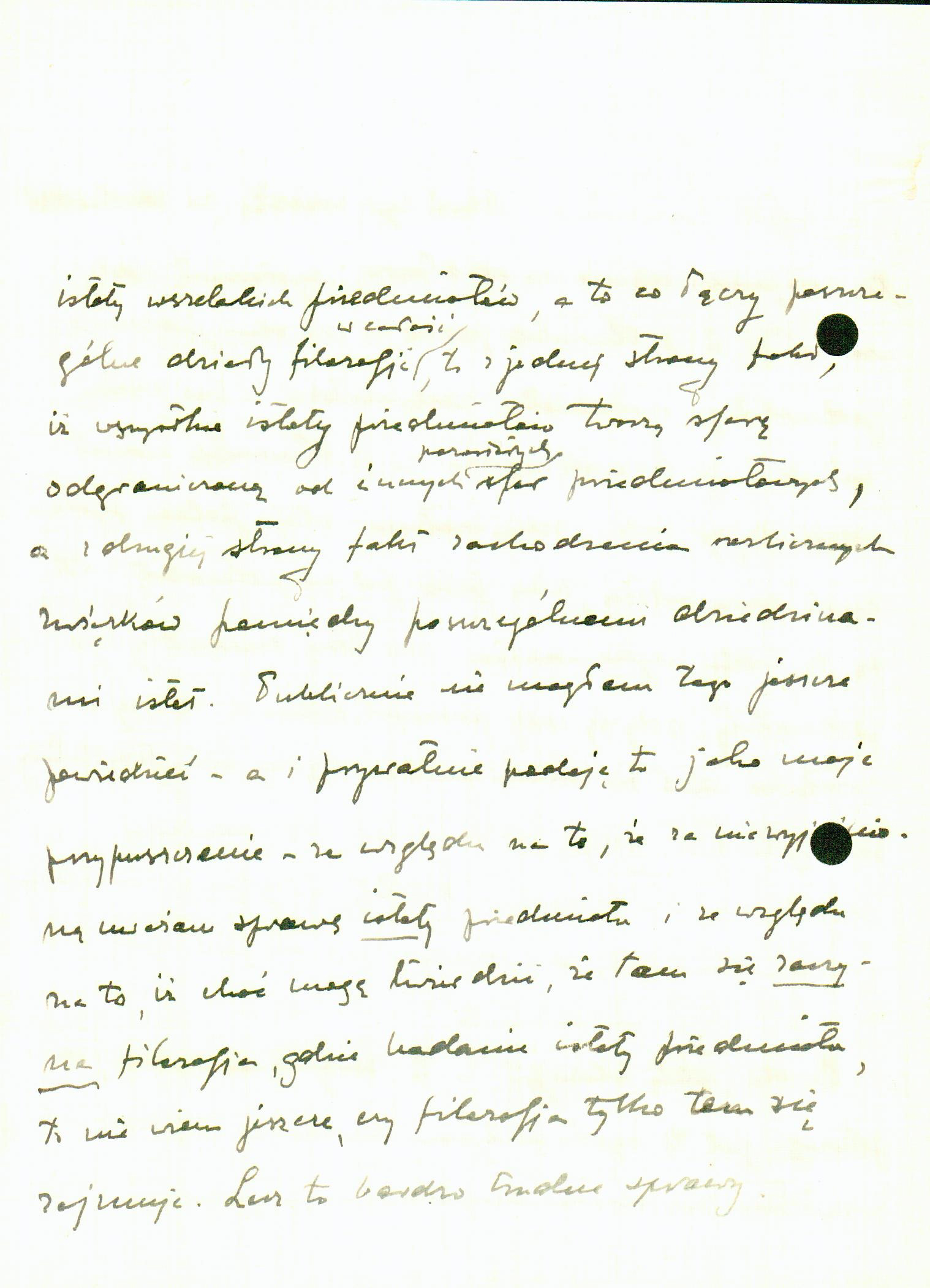 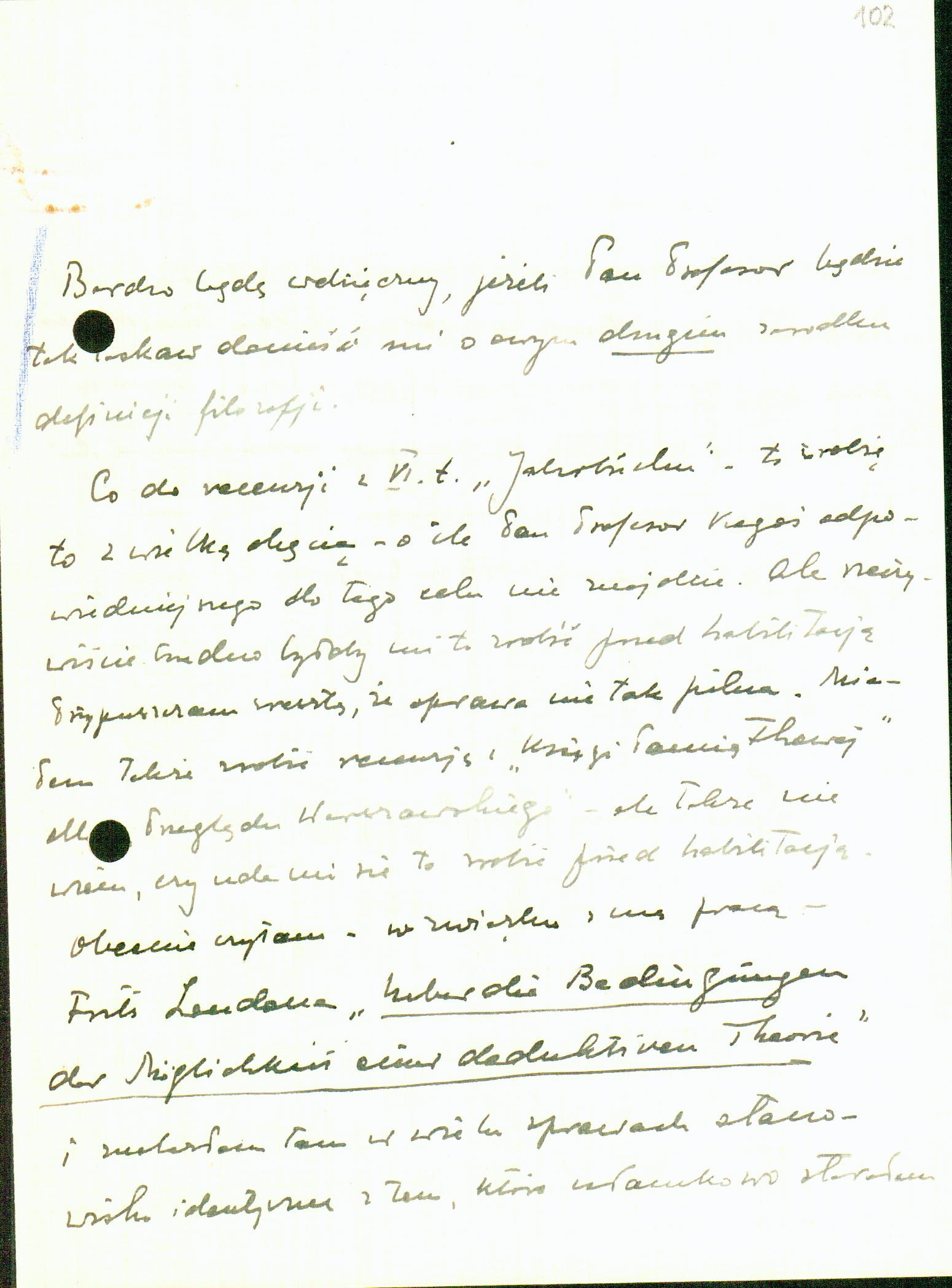 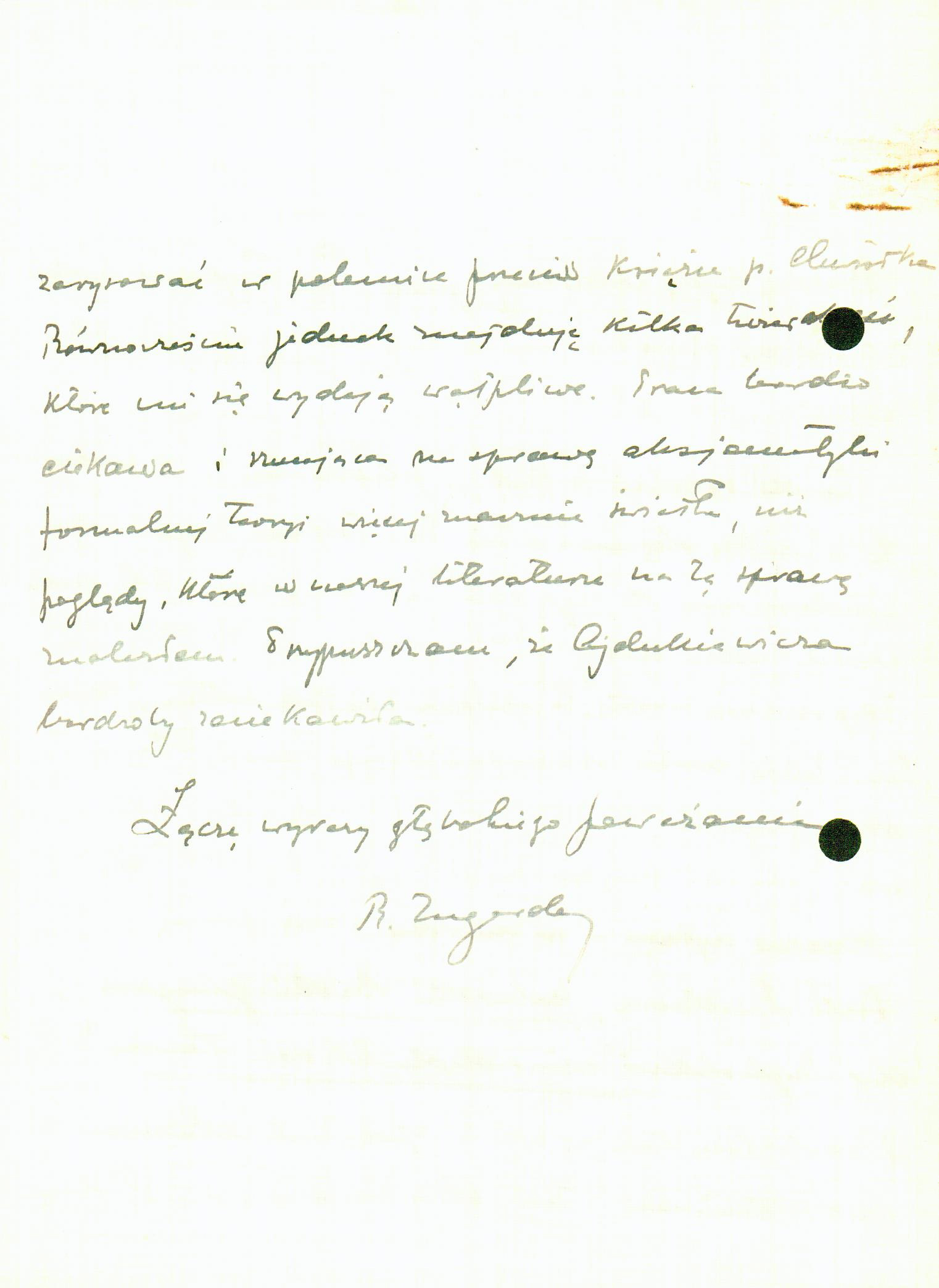 Despite my best intentions, until now I haven’t had the time to respond to your last letter, received 10 days ago. I haven’t even had time to work for myself, because new school issues of one kind or another kept arising and taking up the afternoon hours. Finally, I got down to work last Thursday, but again next week, due to three days of seasonal conferences, there’s going to be another break.

I cordially thank you for your last letter and for expressing your fundamental consent to the reconstruction of my original plan for the paper. Having at the moment a finished outline of a paper on the theme ‘What is x?’, over the coming months I’ll be able to finish this outline in detail, explain points that are still in doubt, etc. Actually, there’s not much work left any more, though there are still a few points I can’t cope with. At the same time, all of the perspectives are beginning to take shape; it’s only that, not being able to calculate how much free time I’ll have at my disposition in the coming months, it’s hard for me to say when the paper will be completely – depending on my efforts – ready.

As to that study of the critical views of Locke, Leibniz, and Hume on identity, I see it as being completely independent of the ‘What is x?’ dissertation ‒ as something which, as a second dissertation, I wanted to combine with the first for purposes of habilitation, as an example of my critical work.

On the other hand, it’s a fragment of the review of views on identity ‒ but a fragment which basically discusses three different positions, three different attempts to solve the riddle of identity, attempts in relation to which subsequent theories are merely variations. I also have an outline of this paper, but whereas the outline of the first paper needs only to be completed in detail, I’ll have to rewrite the outline of the second to a considerable extent.

As for the discussion with Prof. Kotarbiński à propos ideal objects, I’ll have to flesh it out in terms of certain points, especially since Dr. Borowski’s comments also leave me highly unsatisfied.

Thus my plan is as follows: at present I’ll finish the dissertation ‘What is x?’ ‒ I’ll type it up and send it to you (possibly along with the discussion with Prof. Kotarbiński), then I’ll get down to work on the second dissertation, and once it’s finished, again I’ll send it to you. I suppose that this way you’ll have it at hand; if I’m mistaken about this, then I ask you to graciously let me know, and I’ll wait and send both papers at the same time.

Given this opportunity, I extend my fervent thanks for your gracious expression of readiness to read my work at the early typescript stage. This will greatly facilitate the matter for me, especially since I’ll be able to make use of your critical comments prior to printing ‒ as long as you kindly allow me to do so, of course. Once again, my cordial thanks!

In the enclosure, I’m sending an offprint of my article ‘On the essence of internal experience’. I’m very curious as to what kind of impression my argumentation will make on you. Personally, both from Prof. Kotarbiński’s response and from an in-person conversation with him on this subject, I received the impression that my article was not devoid of effect; I observed a certain hesitation on Prof. Kotarbiński’s part concerning the materialist position. Of course, I don’t believe that he was inclined to endorse my position, or – even now – to make certain concessions. But I have the impression that perhaps my opposition, through this interaction and other factors, awakened in Prof. Kotarbiński a need to think these matters through once again. I’d be very happy if that were really so. However, on the issue of description and imitation, there’s a misunderstanding between us, since Prof. Kotarbiński takes my arguments as a contribution to vocabulary ‒ as a terminological issue ‒ and stands by his own concept of description. As for the issue of philosophy ‒ i.e. its scientific value ‒ I also found a certain change (or perhaps only a clarification of the misunderstanding) which is noted, in any case, in Prof. K’s ‘Answers’.

On the other hand, the whole business with Mr Chwistek was regrettable for me. In spite of everything, I never guessed that my article – though undoubtedly expressed in too harsh a form, which I myself found regrettable – as I wrote to you at the time – was capable of evoking this kind of reaction. Be that as it may, my article was factual and surely sufficiently justified. I was even more distressed by the editors of [Philosophical] Review, who, having printed such a personal attack, failed to print my response in the same issue, even though it maintained the calmest possible (and perhaps overly polite) tone and even though I supplied it two days before the deadline given me. Supposedly the reason, again, was some kind of printing difficulties, to which I fell victim a second time. It was also regrettable for me from the point of view that the only serious and, from Mr Chwistek’s point of view, just complaint ‒ concerning the omission of the word reality in the quote I cited ‒ was not immediately clarified; not even the ‘errata’ that I sent ex post [Latin: after the fact] to the editors were printed. Undoubtedly, a regrettable error occurred during the transcription of the article, but how was I supposed to remove it, since, in spite of my request, neither proofs nor my final manuscript were sent to me? Similar errors of omission or changed words ‒ but this time several purely printing errors were also found. The omission of the remainder of the quoted sentence was conscious on my part, because in the same sentence I talk about taking the postulates of life into account, and thus it seemed to me that here there could be no misunderstanding ‒ that it could concern only a system that took its postulates of life into account. I see that I made a mistake and thereby weakened my argumentation unnecessarily. For if it’s impossible to create a postulate of systematic life considered precisely in this manner, on the basis of formal logic, as Mr Chwistek claims, it seems to me completely incomprehensible why Mr Chwistek, in desiring to account for these postulates, chooses his intellectualistic method, which assumes formal logic. At any rate, there may be a misunderstanding here concerning the words ‘system of reality’, and that Mr Chwistek would say that he’s not proposing one uniform system of reality, but four different systems. I believe, however, that Mr Chwistek, even in distinguishing four realities, proposes one system of reality, which, if ‘non-uniform’ ‒ these are failures of execution, but which would have to be uniform in order to render the whole idea of the four realities capable of realisation. I think that a discussion would be useful here, if Mr Chwistek were capable of a substantive discussion. Unfortunately, irritation veils Mr Chwistek’s vision regarding things and arguments.

As for the ‘essence of philosophy’, I really believe that philosophy is a systematic study – first and foremost by means of direct cognition ‒ of the essence of objects of all kinds, and what links particular divisions of philosophy to the whole is, on one hand, the fact that all the essences of objects form a sphere delimited from all other spheres of objects and, on the other hand, the existence of numerous connections between particular realms of essences. I haven’t been able to say this publicly yet ‒ whereas privately I offer it as my guess ‒ because I regard the question of the essence of an object as unexplained and because, while I can argue that philosophy begins with the study of the essence of an object, I don’t yet know whether philosophy deals with this alone. But these are very difficult matters.

I’d be very grateful if you’d be so gracious as to inform me about this second germ of the definition of philosophy.

As for the review of Volume VI of [Philosophical] Yearbook, I’ll do it very willingly, unless you find someone more suitable for this purpose. But it’d be difficult for me to do it before my habilitation. Anyway, I don’t suppose that the matter is so urgent. I was also supposed to do a review of the ‘Commemorative Book’ for Warsaw Review, but I don’t know if I can do that before my habilitation either. At present I’m reading, in connection with my paper, Fritz London’s ‘Ueber [Über] die Bedingungen der Möglichkeit einer deduktiven Theorie’ [On the conditions governing the possibility of a deductive theory], and have found there, on many issues, a position identical with the one I tried to outline fragmentarily in my polemic against Mr Chwistek’s book. At the same time, though, I find several claims that seem doubtful to me. The paper is very interesting and throws more light on the issue of formal axiomatic theory than the views on this issue that I found in our literature. I think Ajdukiewicz would be very interested in this.