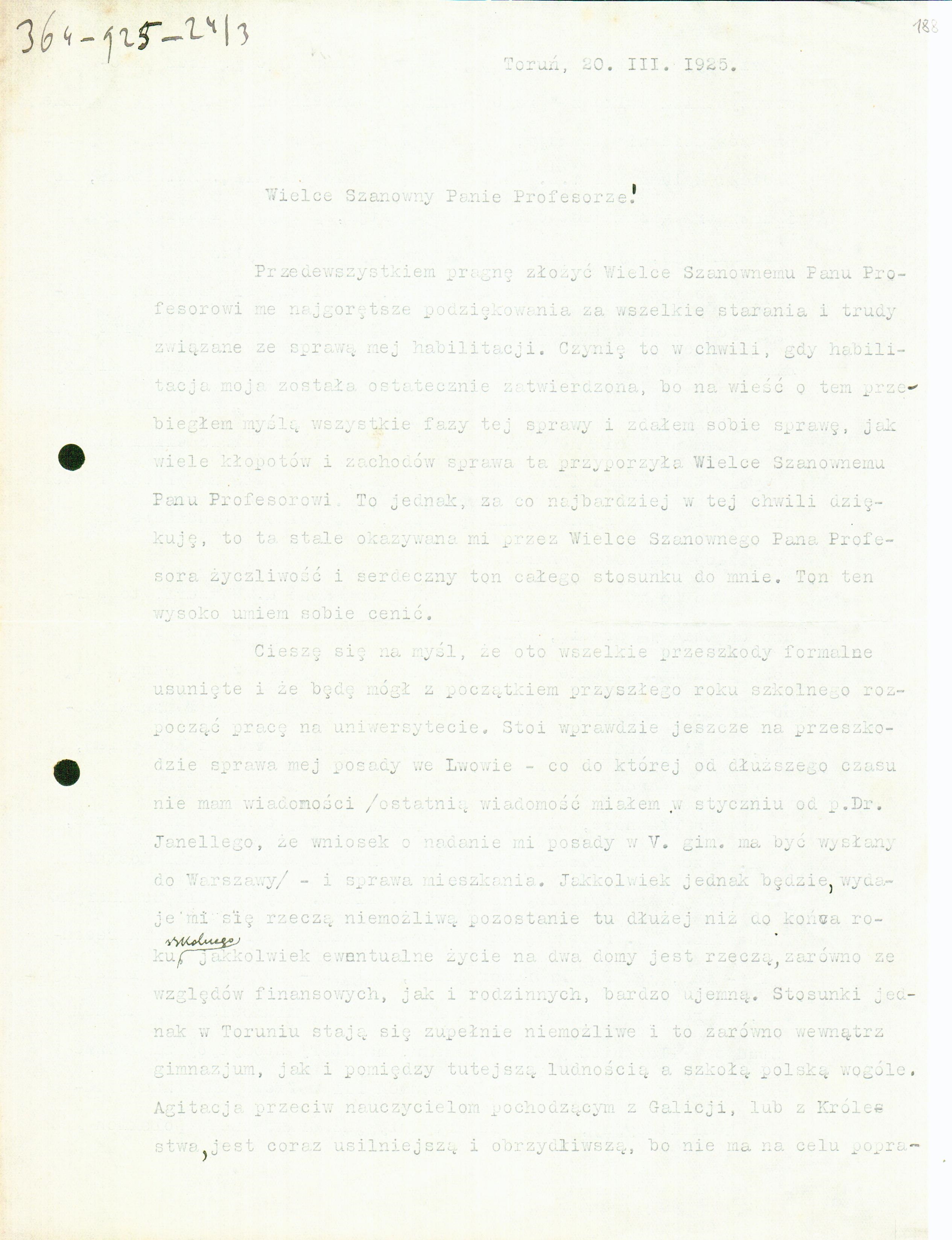 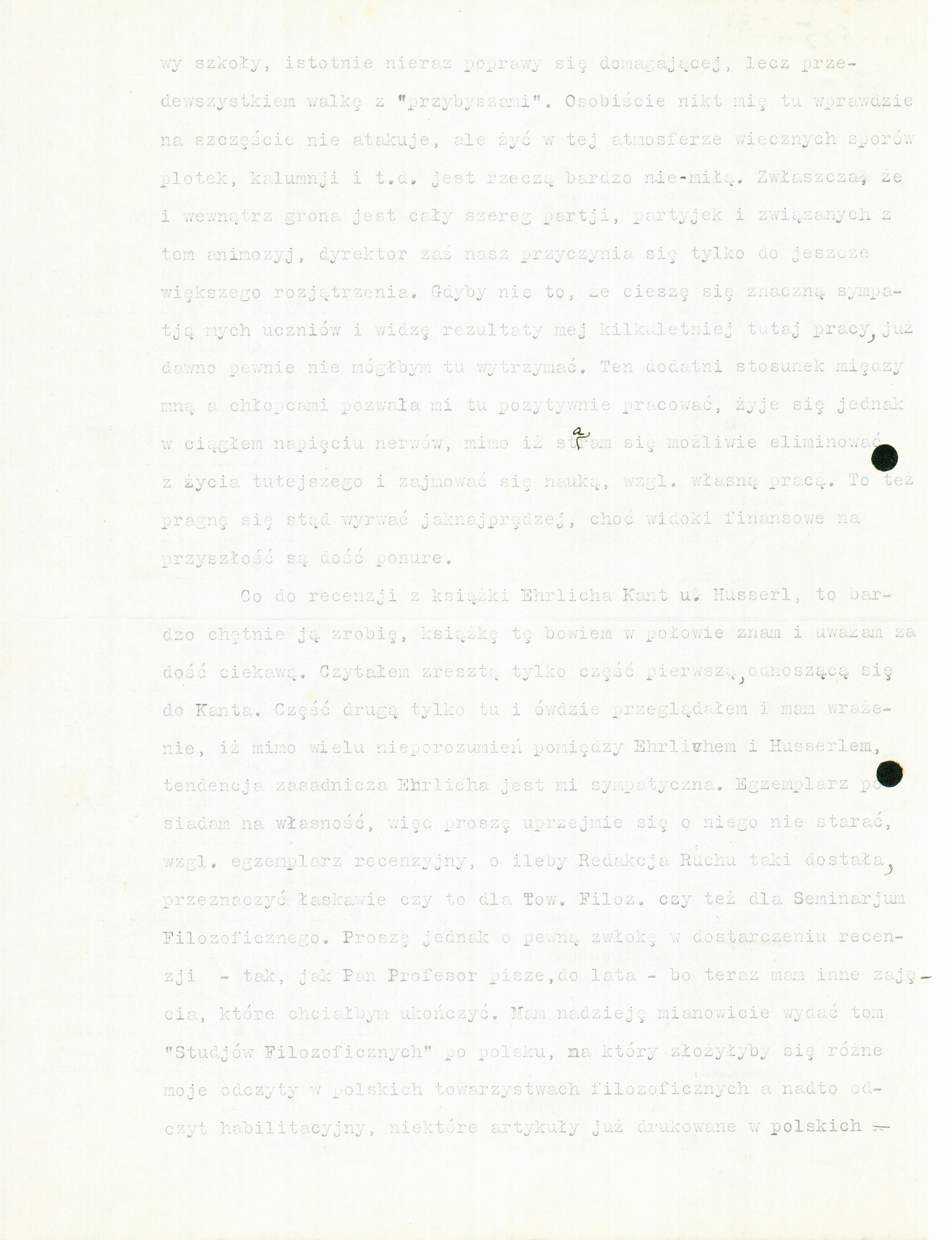 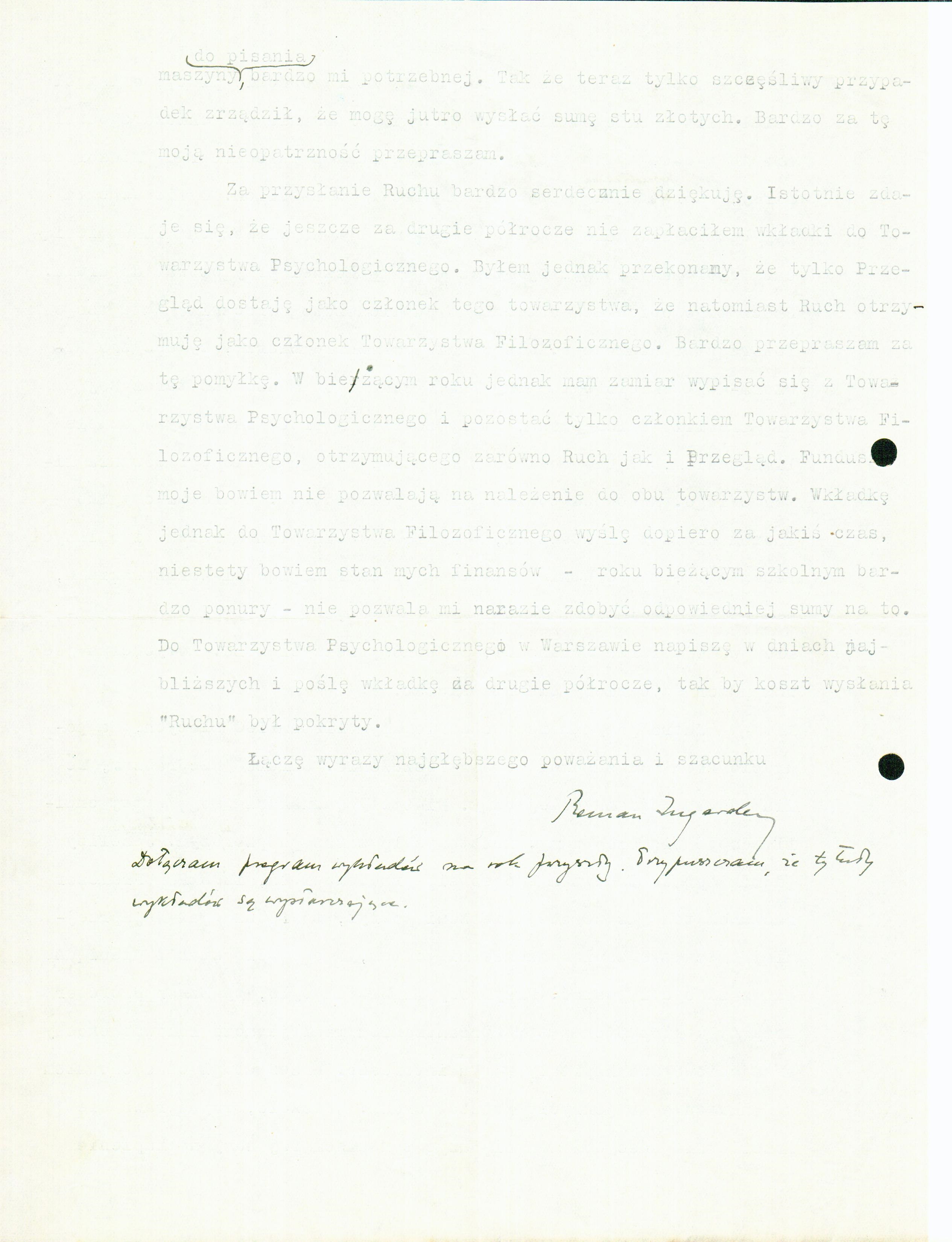 First of all, I wish to offer you my most fervent thanks for all your efforts and trouble related to the matter of my habilitation. I do so at the moment of the final approval of my habilitation, because upon receiving this news, I ran through all the phases of this matter in my mind and realised how many problems and pains this matter has caused you. What I thank you for the most at this moment, though, is the kindness and cordial tone that you’ve constantly shown me in your relations with me, a tone I’m capable of greatly appreciating.

I’m happy to know that all formal obstacles have been removed and that I’ll be able to start working at the university at the beginning of the next school year. Still standing in the way is the matter of my position in Lviv – regarding which I haven’t had any news for a long time (I last heard from Dr Janelli in January to the effect that the application for giving me a post in middle school no. 5 was to be sent to Warsaw) ‒ along with the matter of a flat. Whatever may happen, staying here any longer than the end of the school year seems to me to be an impossibility; on the other hand, a potential two-household life is an extremely negative thing, for both financial and family reasons. However, relations in Toruń are becoming completely impossible, both within the middle school and between the local population and the Polish school in general. Agitation against teachers from Galicia or the Kingdom [the former Kingdom of Poland, also known as the Congress Kingdom] is becoming ever stronger and more disgusting, as it’s not aimed at improving the school, where improvements are sometimes essential, but first and foremost to fight the ‘newcomers’. Fortunately, nobody really attacks me personally here, but to live in this atmosphere of eternal disputes, gossip, calumny, etc., is a very unpleasant thing. Especially since there are a whole series of parties, factions, and associated animosities within the group, whereas our headmaster only contributes to even greater aggravation. If not for the fact that I enjoy the considerable sympathy of my students and can see the results of my several years of work here, I probably couldn’t have held out here for even this long. This favourable relationship between the boys and myself enables me to do positive work here; however, I live under a constant nervous strain, despite trying to keep myself away from local life as much as possible and occupy myself with philosophy, i.e. my own work. For this reason, too, I wish to tear myself away from here as quickly as possible, even though my financial prospects for the future are rather gloomy.

As for the review of Ehrlich’s book, Kant u.[und] Husserl [Kant and Husserl], I’ll gladly do it, because I’m familiar with part of this book and deem it quite interesting. I’ve read only the first part, referring to Kant. I’ve only looked over the second part here and there, and have the impression that, despite many misunderstandings between Ehrlich and Husserl, I’m in sympathy with the basic drift of the former. I have a copy myself, so please don’t worry about it (i.e. a review copy); if the Editorial Board of Movement has received one, it can be graciously earmarked for the Philos. Soc. or for the Philosophical Seminarium. However, I ask for a certain delay in supplying the review ‒ as you write, until summer – because at the moment I have other pursuits I’d like to finish. Specifically, I’m hoping to publish a volume of Philosophical Studies in Polish, which would include my various lectures at Polish philosophical societies in addition to my habilitation lecture, some articles that have already been printed in Polish periodicals, and, moreover, one dissertation I’m writing about the essence of a literary work, which Fiszer-Majewski [O1] in Poznań has basically agreed to publish; it’s only that this decision has yet to be approved by the firm’s supervisory board, a meeting of which is to be held at the end of this month. If their decision is in my favour, I’ll have a lot of work to do over the next few months to finally prepare this item for printing. Apart from that, I’ve promised to contribute something for the jubilee year of the local Scientific Society. I don’t really believe that Fiszer-Majewski’s decision is going to be favourable; nevertheless, I now have to occupy myself with the implementation of the plan, which, in any case – apart from the dissertation on the literary work, which is only a work in progress – requires only development in literary terms. Substantively speaking, it’s ready. Thus, if I can only manage to cope with these tasks, I’ll think about the review of Ehrlich and about other reviews which I still owe Warsaw Review, assuming it’s still going to be published in future, as there were some difficulties in this respect which have supposedly been overcome. So far, however, the January issue hasn’t appeared.

Tomorrow I’ll be sending 100 zlotys simultaneously with this letter, to cover the bill for printing my summary. I apologise for not sending the whole sum at once. Unfortunately, though, I’m not able to get my hands on a larger sum at this time. I’ll send the rest immediately after the first of April. If, however, the matter stands such that you’ve already paid this bill out of your own pocket, I ask you as politely as possible to graciously inform me and I’ll try to obtain the money and send it immediately. I’d be very sorry if, along with so many problems with the summary, you also had to invest your own capital, even temporarily, in this business. For a long time, I’d been keeping enough money in the bank to cover printing costs. Finally, as the matter dragged on, I decided meanwhile to use this sum to buy the typewriter, which I needed badly. So it is that, as luck has ordained, I can send the sum of one hundred zlotys tomorrow. I apologise for this lack of responsibility on my part.

I enclose expressions of the most profound esteem and respect

I enclose the lecture programme for the coming year. I assume the titles of the lectures are sufficient.