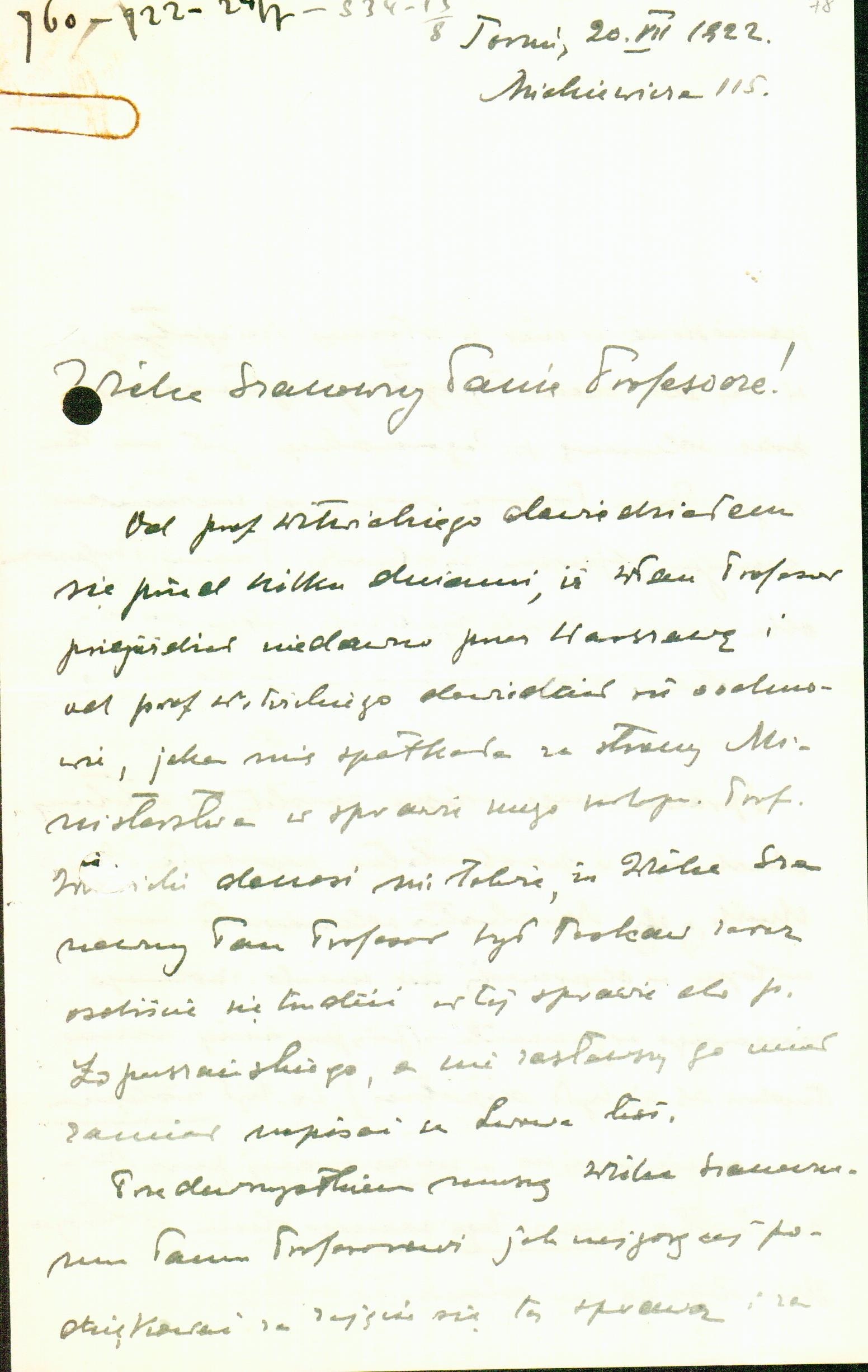 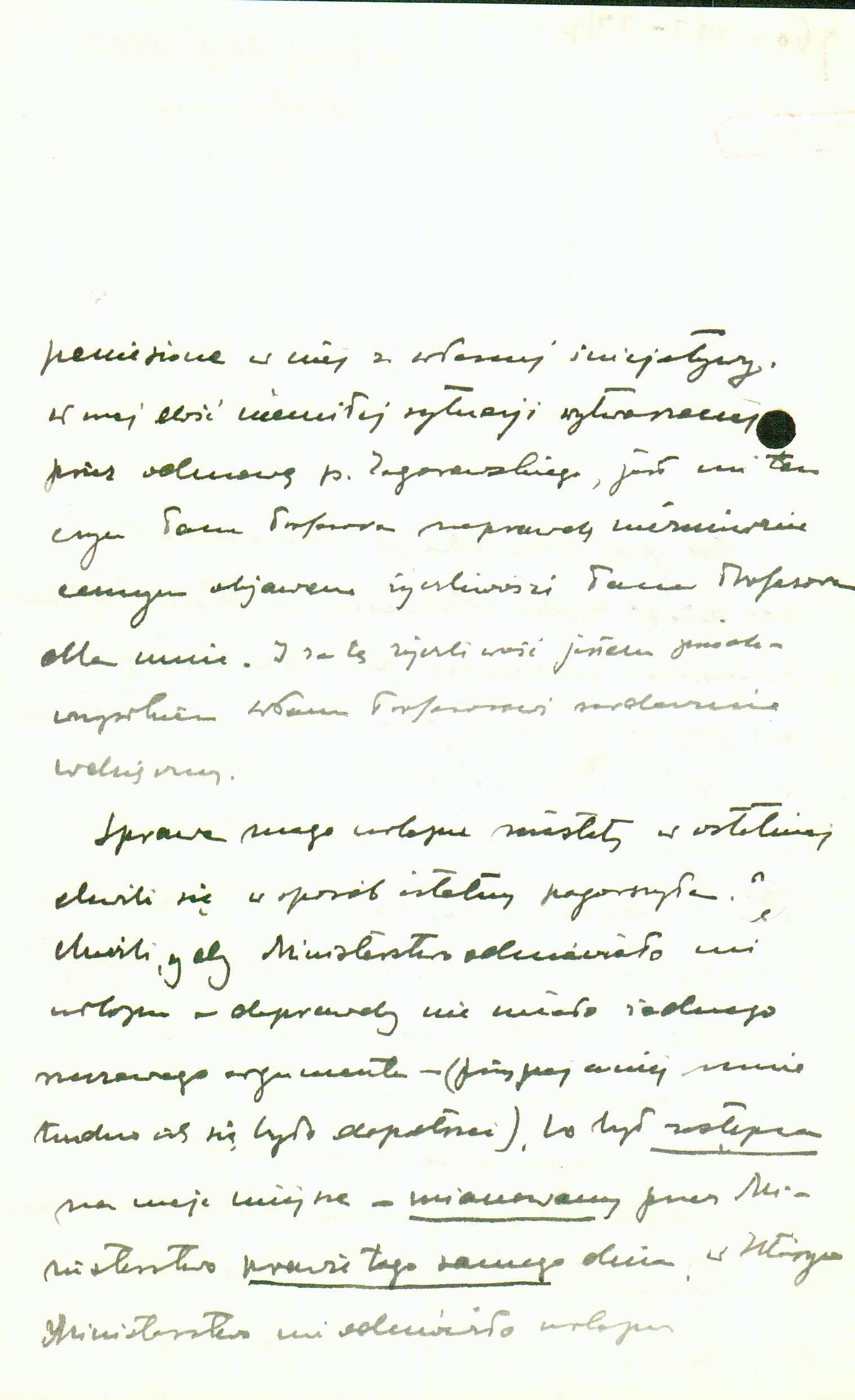 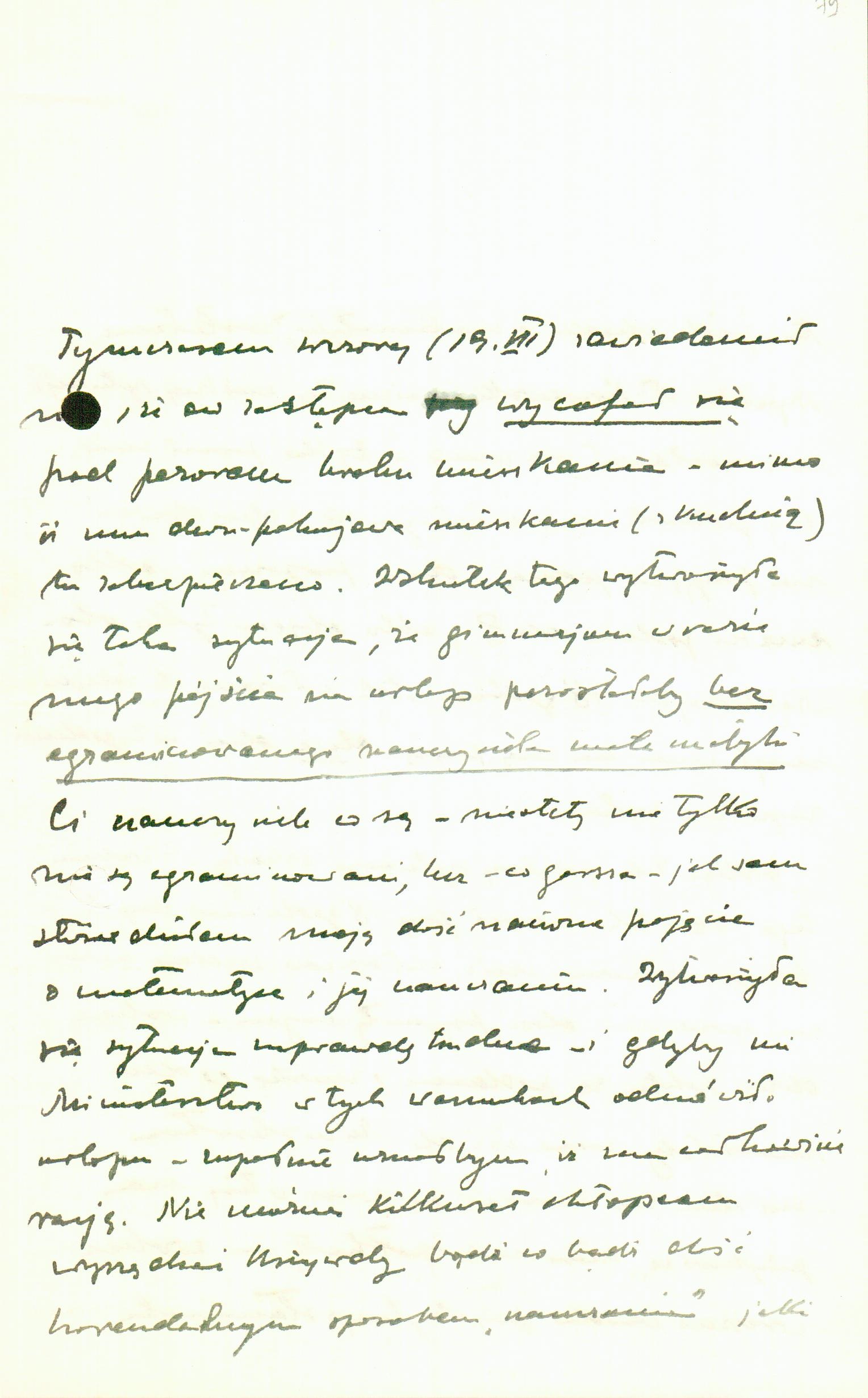 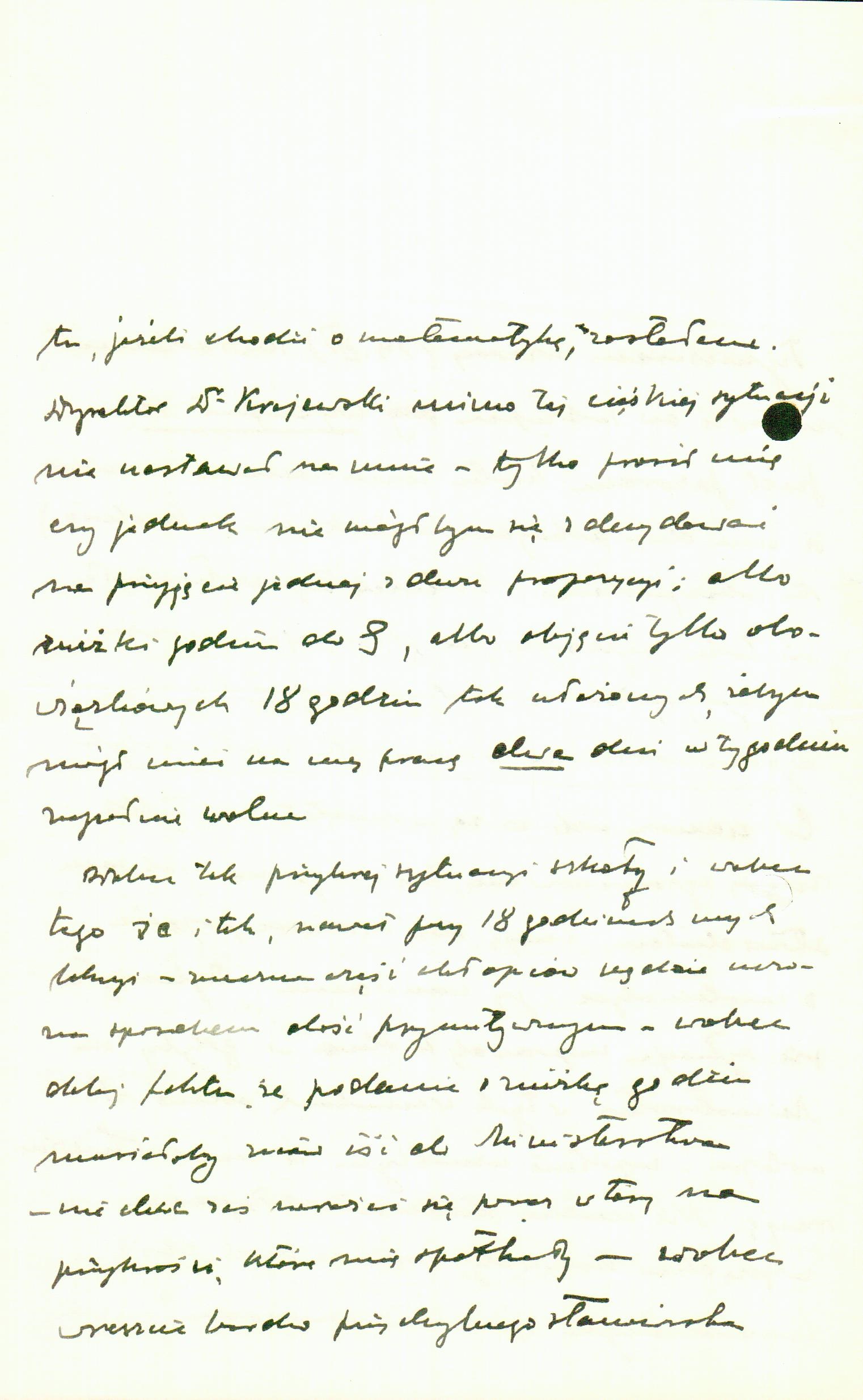 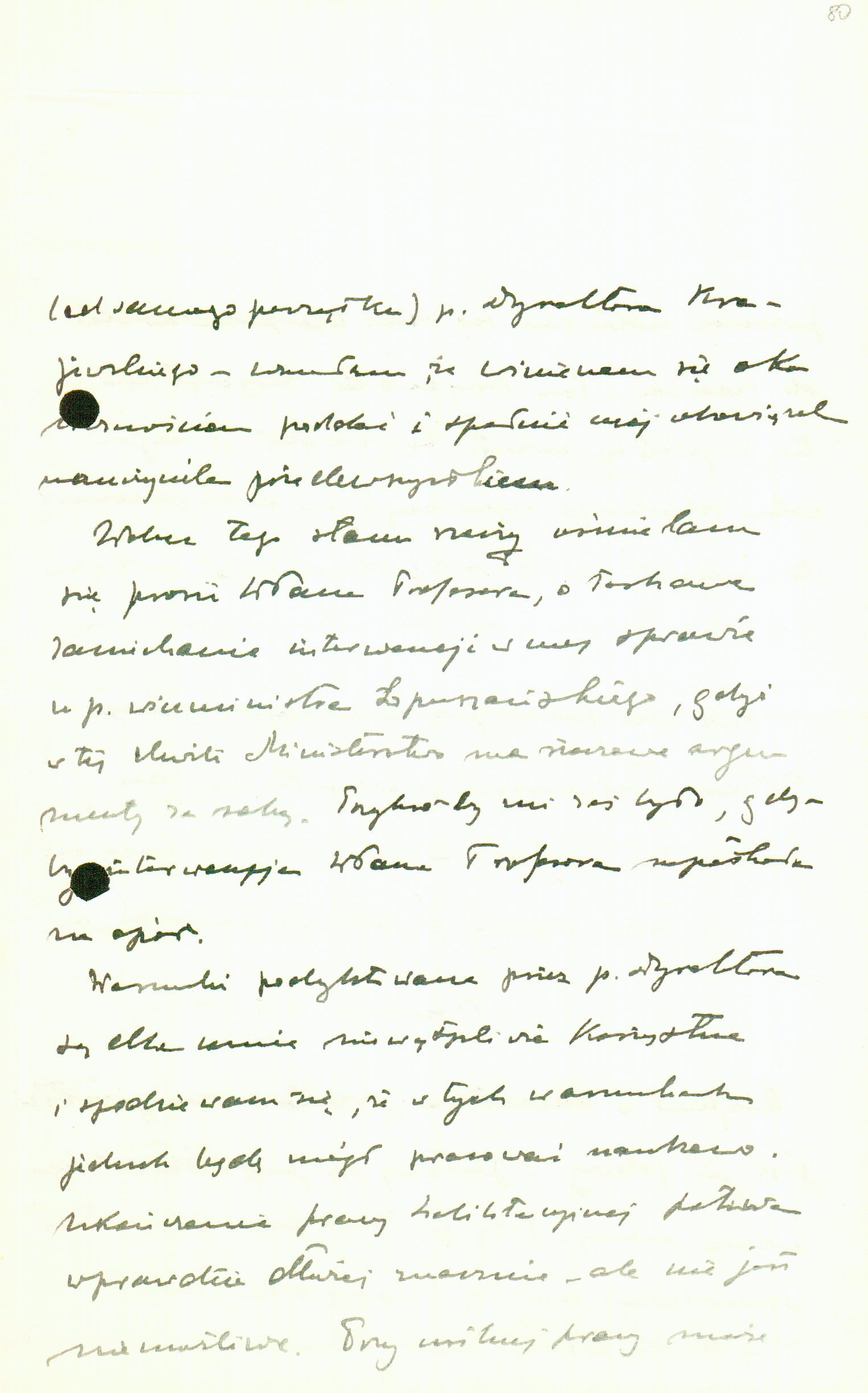 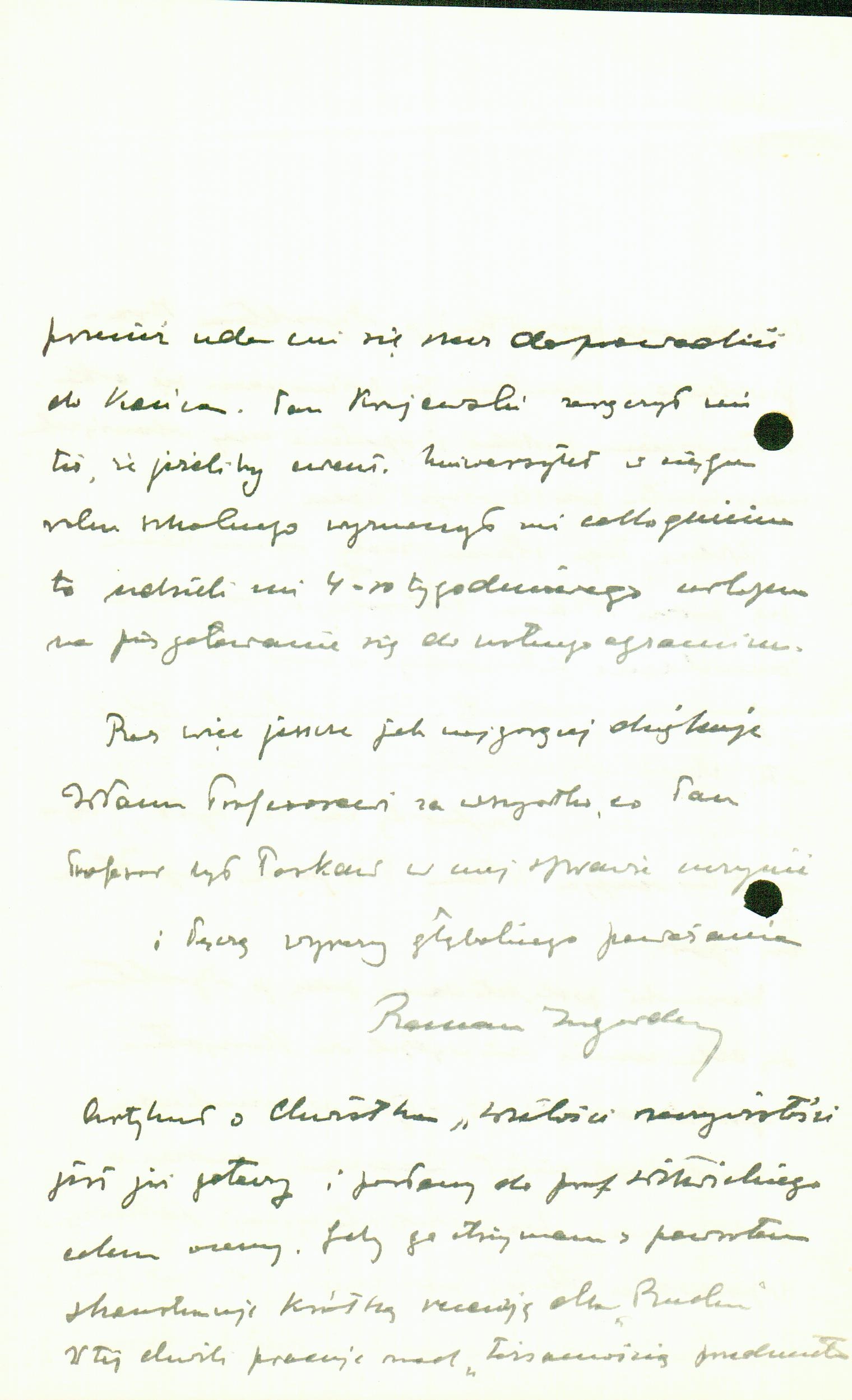 A few days ago, I learned from Prof. Witwicki that you recently passed through Warsaw and learned from him about the refusal I encountered on the part of the Ministry regarding the matter of my leave. Prof. Witwicki also informed me that you were gracious enough to personally trouble yourself in this matter by going to see Mr Łopuszański[O1] , and that, being unable to find him, you intended to write a letter from Lviv.

First and foremost, I have to thank you as fervently as possible for occupying yourself with this matter and for getting involved in it on your own initiative. In the rather unpleasant situation created for me by the refusal of Mr Zagórowski[O2] , your action is, in my eyes, an extremely precious sign of your kindness towards me. And for this kindness, I am, above all, sincerely grateful to you.

Unfortunately, the matter of my leave has significantly deteriorated of late. At the moment the Ministry denied my leave, it really had no substantial argument (at least it was difficult for me to perceive any), since there was a substitute to take my place, appointed by the Ministry almost on the same day that it denied my leave.

However, yesterday (19/7) I was informed that the substitute had withdrawn under the pretext of not having a flat ‒ despite the fact that a two-room flat (with kitchen) had been secured for him here. As a result, a situation has arisen in which the middle school, in the event of my leave, would be left without an examined maths teacher. Such teachers as are available are unfortunately not only unexamined,[O3]  but what’s worse ‒ as I’ve confirmed myself ‒ they have a rather naive idea about mathematics and how to teach it. This has created a truly difficult situation ‒ and if the Ministry denied my leave in these conditions, I’d concede that they were absolutely right. One can’t let several hundred boys be harmed, irrespective of the quite horrendous method of ‘teaching’ that I found here, in terms of mathematics. The headmaster, Dr Krajewski[O4] , despite this difficult situation, didn’t insist, but only asked me whether I might not decide to accept one of two propositions: either a reduction in the number of hours to 9, or taking only the obligatory 18 hours, arranged so that I might have two days a week completely free for my work.

Given such a regrettable situation in the school, and in view of the fact that, even with 18 hours of lessons, a significant portion of the boys will be taught in quite primitive fashion, and additionally in view of the fact that any application for a reduction in the number of hours would again have to go through the Ministry ‒ I don’t want to expose myself a second time to the unpleasantness I encountered ‒ and in view, finally, of the very favourable stance (from the very beginning) of the headmaster, Mr Krajewski ‒ I’ve decided that I should surrender to circumstance and carry out my duty as a teacher first and foremost.

In view of this state of affairs, I’m taking the liberty of asking you to graciously abandon any intervention in my case with Deputy Minister Łopuszański, because at the moment the Ministry has justified arguments to fall back on. I’d be sorry if your intervention was to meet with resistance.

The conditions laid down by the headmaster are undoubtedly advantageous for me and I expect that in these conditions I’ll be able to carry out my original philosophical work. Completing the habilitation thesis will take much longer, but it’s not impossible. With hard work, maybe I’ll succeed in carrying out the matter to the end. Mr Krajewski promised me that if the University were to set up a colloquium for me during the school year, he’d grant me a four-week leave to prepare for the oral exam.

So once again, thank you very much for everything you’ve graciously done on my behalf, and I enclose expressions of profound esteem

The article on Chwistek’s Wielość rzeczywistości [The Plurality of Realities] is ready and has been sent to Prof. Witwicki for evaluation. When I get it back, I’m going to put together a short review for [Philosophical] Movement. At the moment I’m working on the ‘identity of the subject[O5] ’

Letter to the Committee of the Library of Classics of Philosophy written 29.11.1951