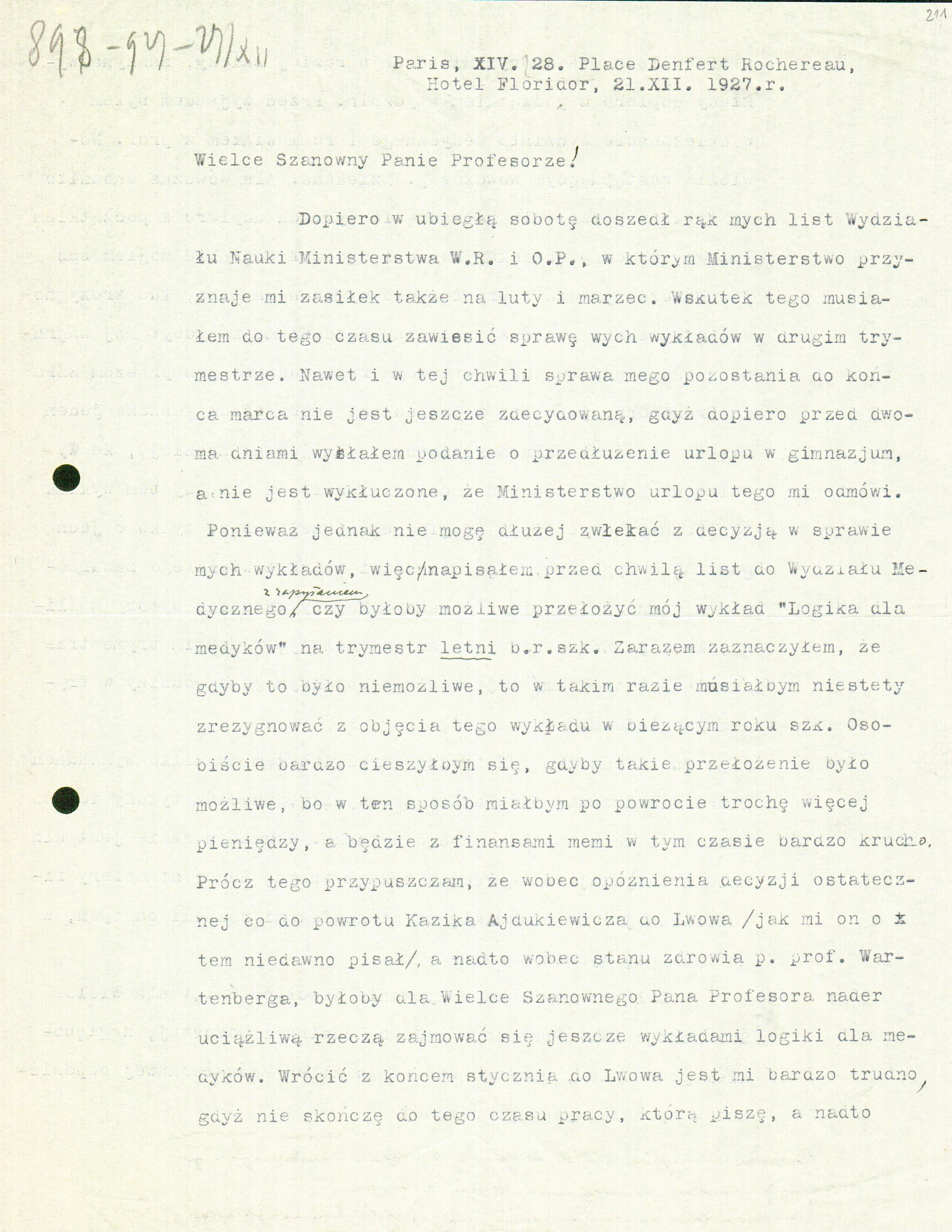 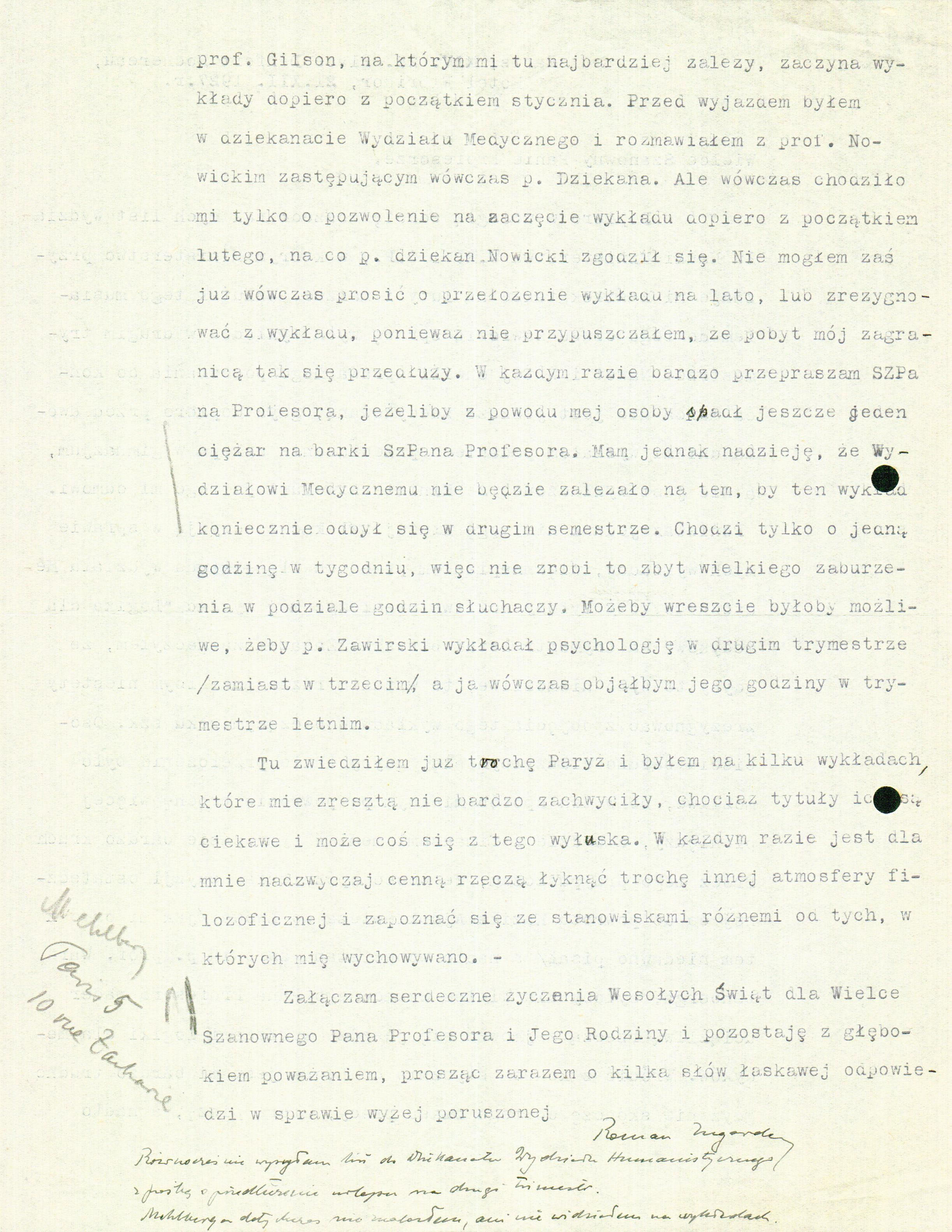 It was only last Saturday that I received a letter from the Department of Science of the Ministry of Religious Denominations and Public Education, in which the Ministry granted me an allowance for February and March as well. As a result, I have to suspend my second-trimester lectures during that time. Even now, the question of my stay until the end of March is not yet decided, since I sent an application for extension of my leave from the middle school only two days ago, and it’s not out of question that the Ministry will turn it down. However, because I can’t delay making a decision about my lectures any longer, a while ago I wrote a letter to the Medical Faculty asking whether it’d be possible to postpone my lecture ‘Logic for physicians’ until the summer trimester of the current school year. At the same time, I indicated that if this were impossible, I’d unfortunately have to give up this lecture for the current school year. Personally, I’d be very happy if such a postponement were possible, because in this way I’d have a little more money upon my return, when my finances will be extremely precarious. In addition, I suppose that, given the delay of the final decision regarding Kazik Ajdukiewicz’s return to Lviv (as he wrote me recently), and, moreover, given the state of Prof. Wartenberg[O2] ’s health, it’d be too difficult for you to concern yourself with lectures on logic for physicians as well. To return to Lviv at the end of January would be very difficult for me, since I won’t have finished the paper I’m writing by that time, and moreover Prof. Gilson[O3] , who’s the most important person to me here, doesn’t begin lecturing until the beginning of January. Before I left, I was at the office of the dean of the Medical Faculty and spoke with Prof. Nowicki[O4] , who was then substituting for the Dean. But at that time it was a question only of permission not to begin lecturing until the beginning of February, to which Dean Nowicki agreed. At that time, I wasn’t yet in a position to ask for the postponement of the lectures until summer, or cancel them, because I didn’t think that my stay abroad would be prolonged to this extent. In any case, I apologise if yet another burden has fallen on your shoulders because of me. I hope, though, that the Faculty of Medicine won’t be concerned as to whether this lecture necessarily takes place in the second semester. It’s a question of only one hour a week, so it won’t create too much of a disturbance in the students’ schedules. Perhaps it would be possible for Mr Zawirski[O5]  to lecture on psychology in the second trimester (instead of the third), and then I would take on his hours during the summer trimester.

Here, I’ve already done a bit of visiting in Paris and have attended several lectures, which didn’t impress me very much, even though their titles were interesting and maybe something could be extracted from them. In any case, it’s extremely valuable for me to taste a slightly different philosophical atmosphere and get acquainted with positions different from those in which I was brought up. ‒

I enclose cordial wishes for a Merry Christmas for you and your family, with my continued profound esteem, at the same time asking for a few words in gracious reply to the matter raised above

At the same time I’m sending a letter to the Dean’s Office of the Faculty of Humanities with a request to extend my leave to the second trimester. I haven’t found Mehlberg yet, nor have I seen him at lectures.