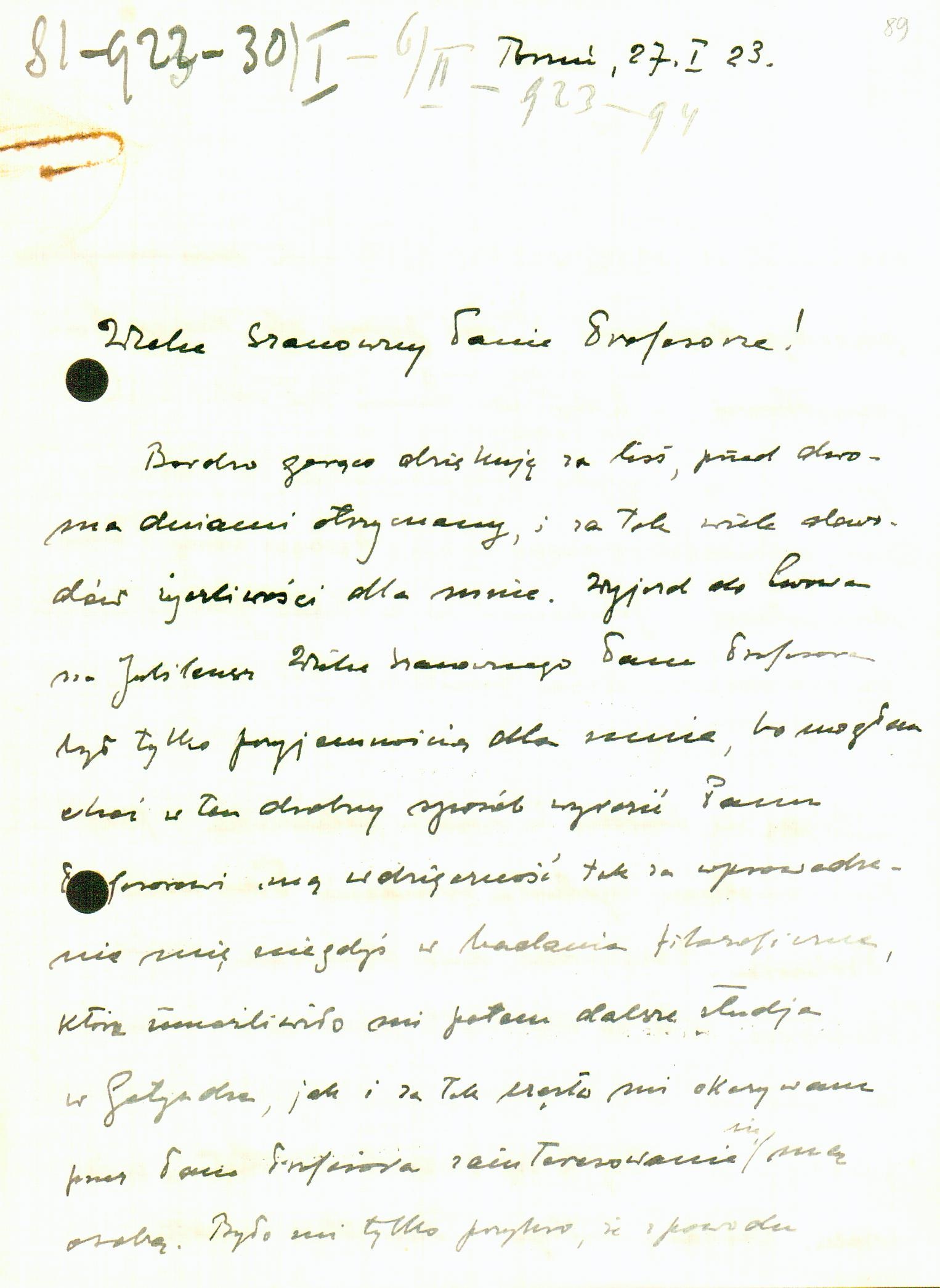 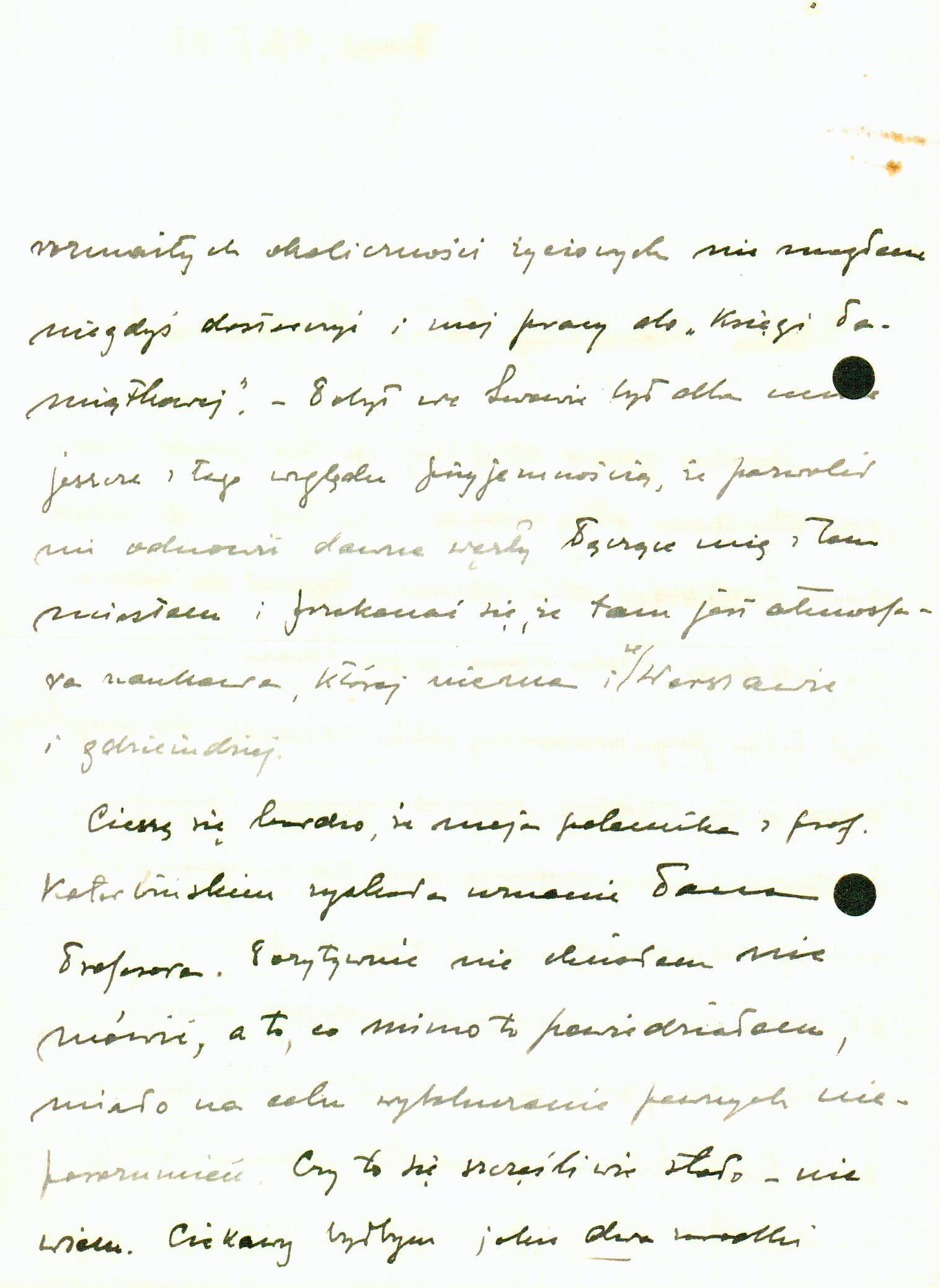 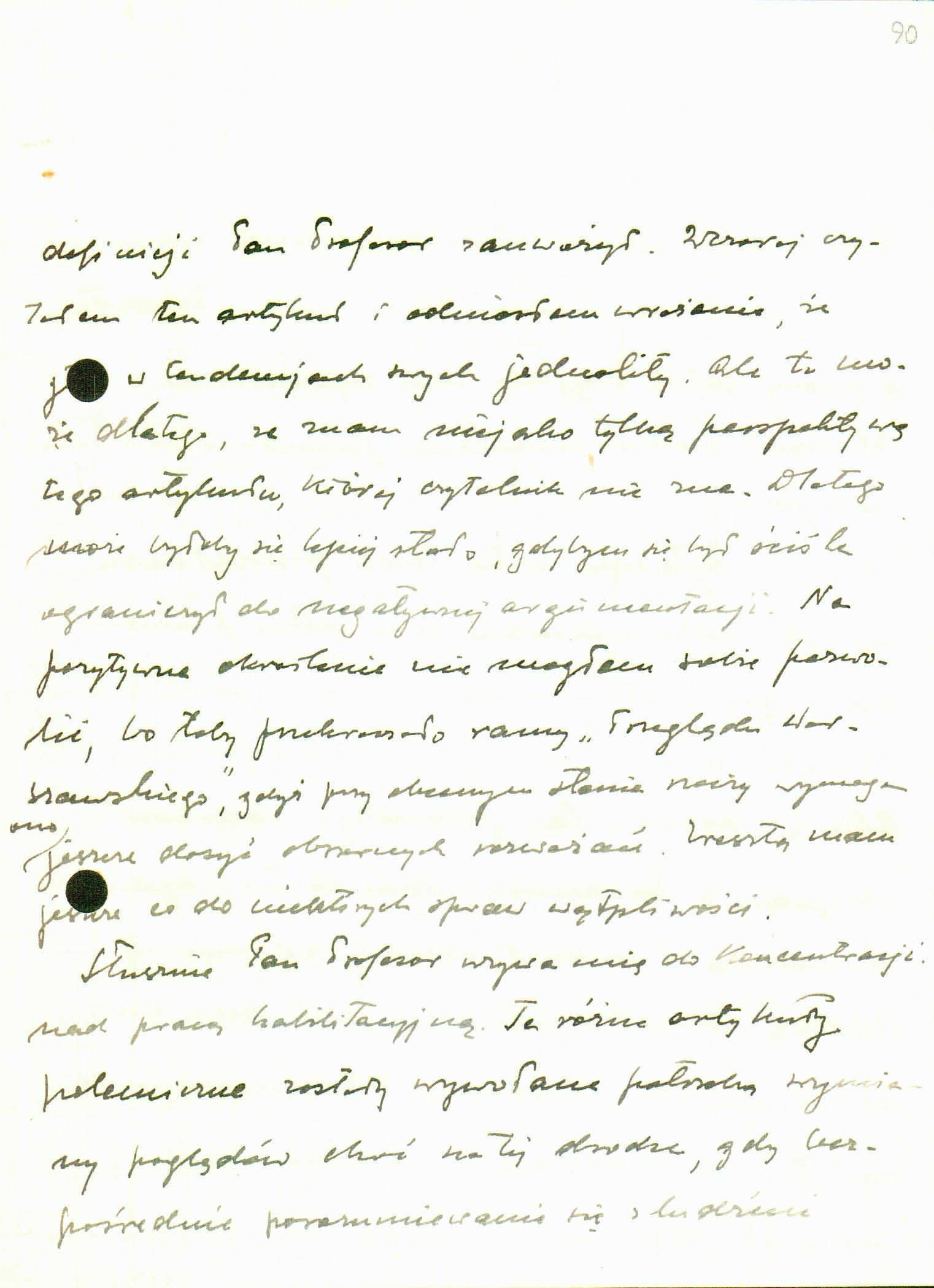 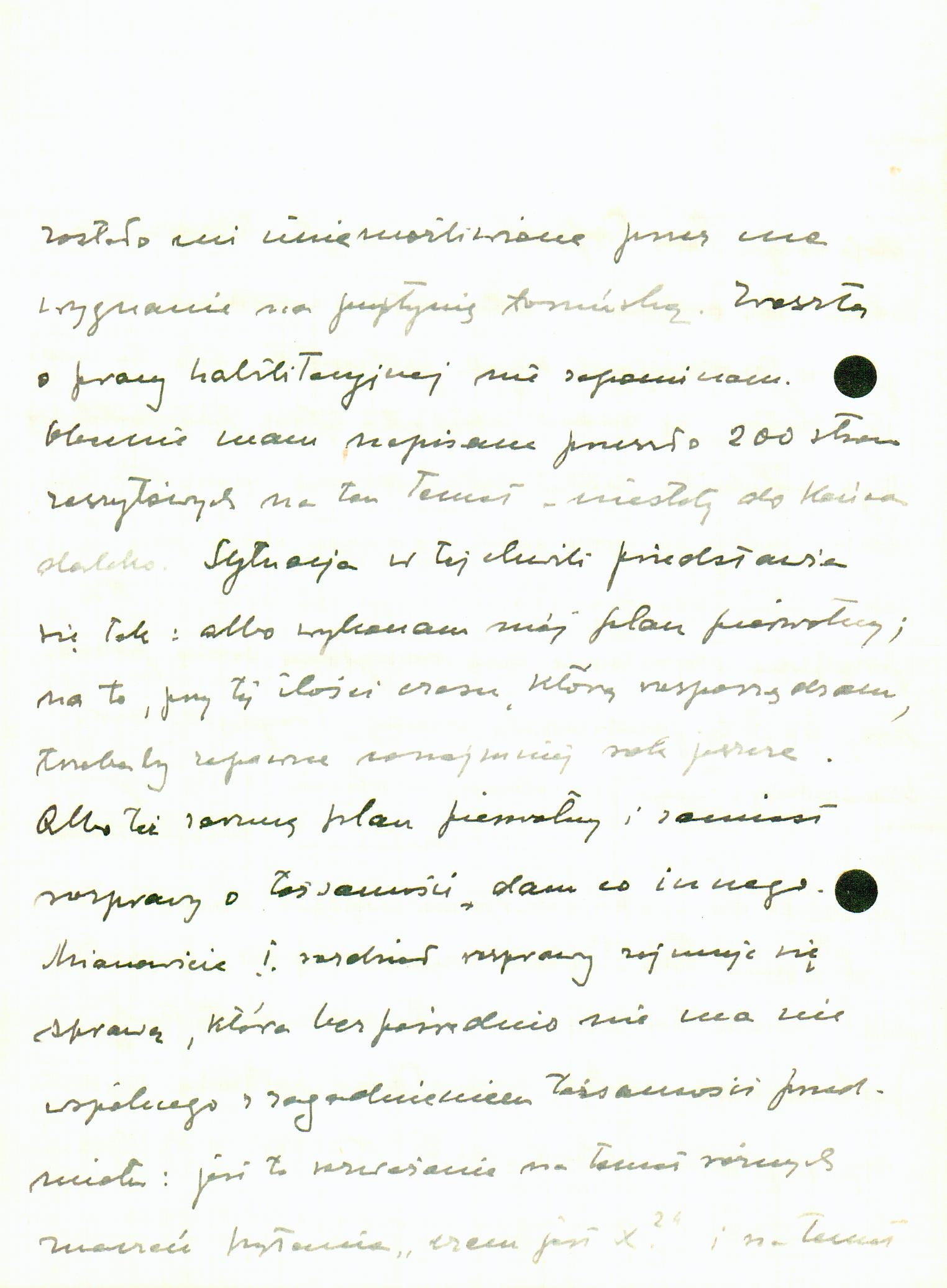 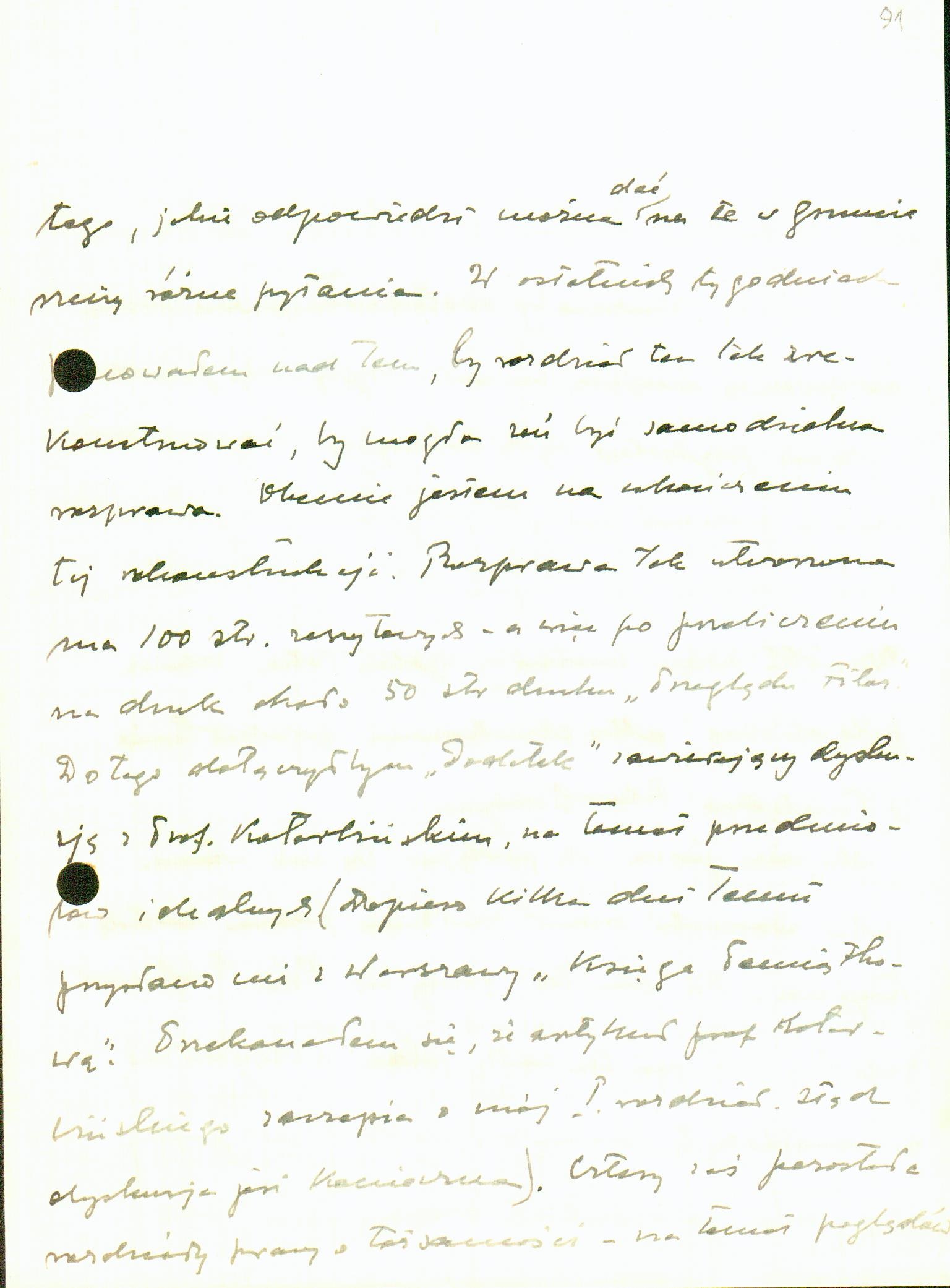 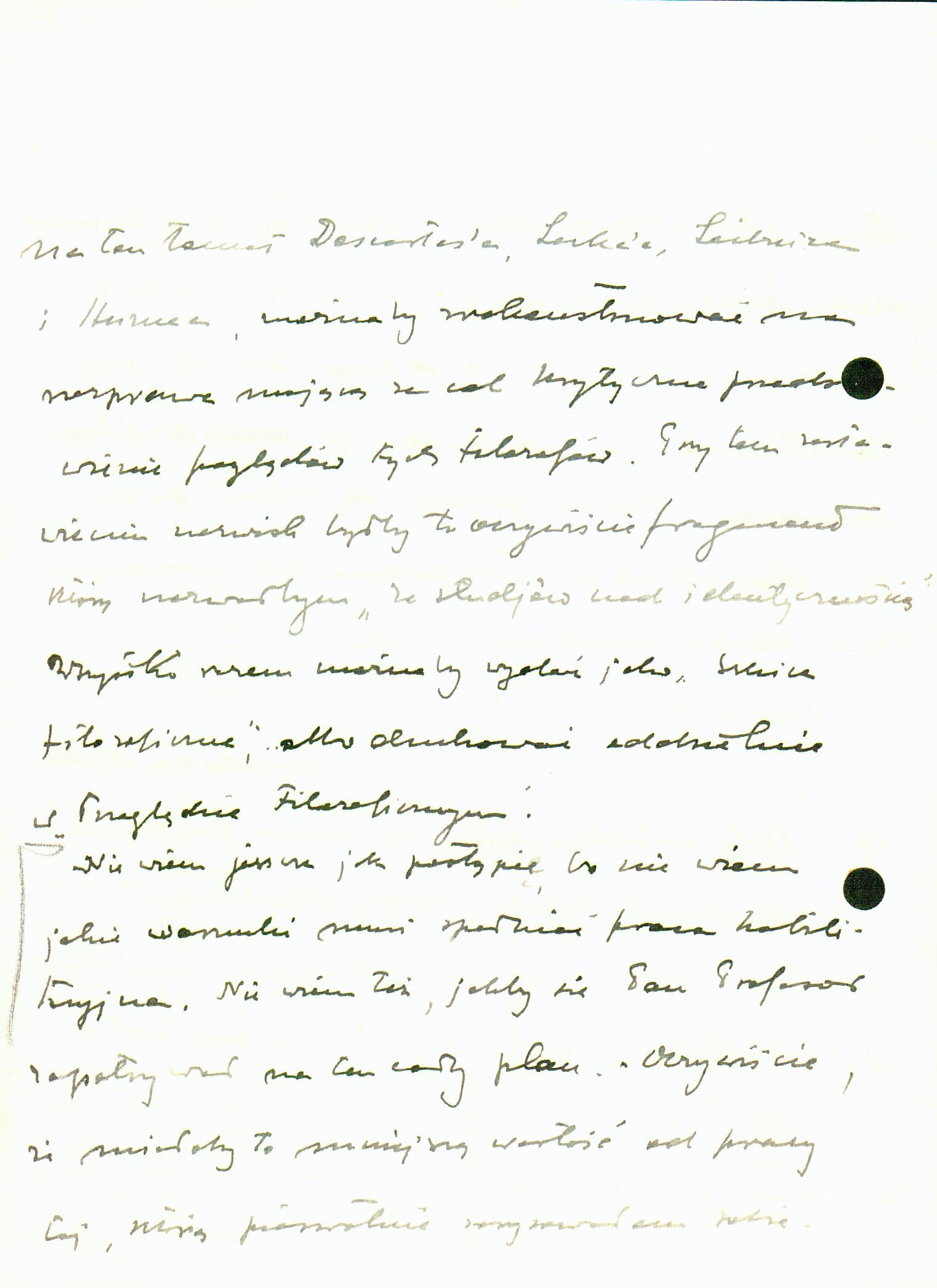 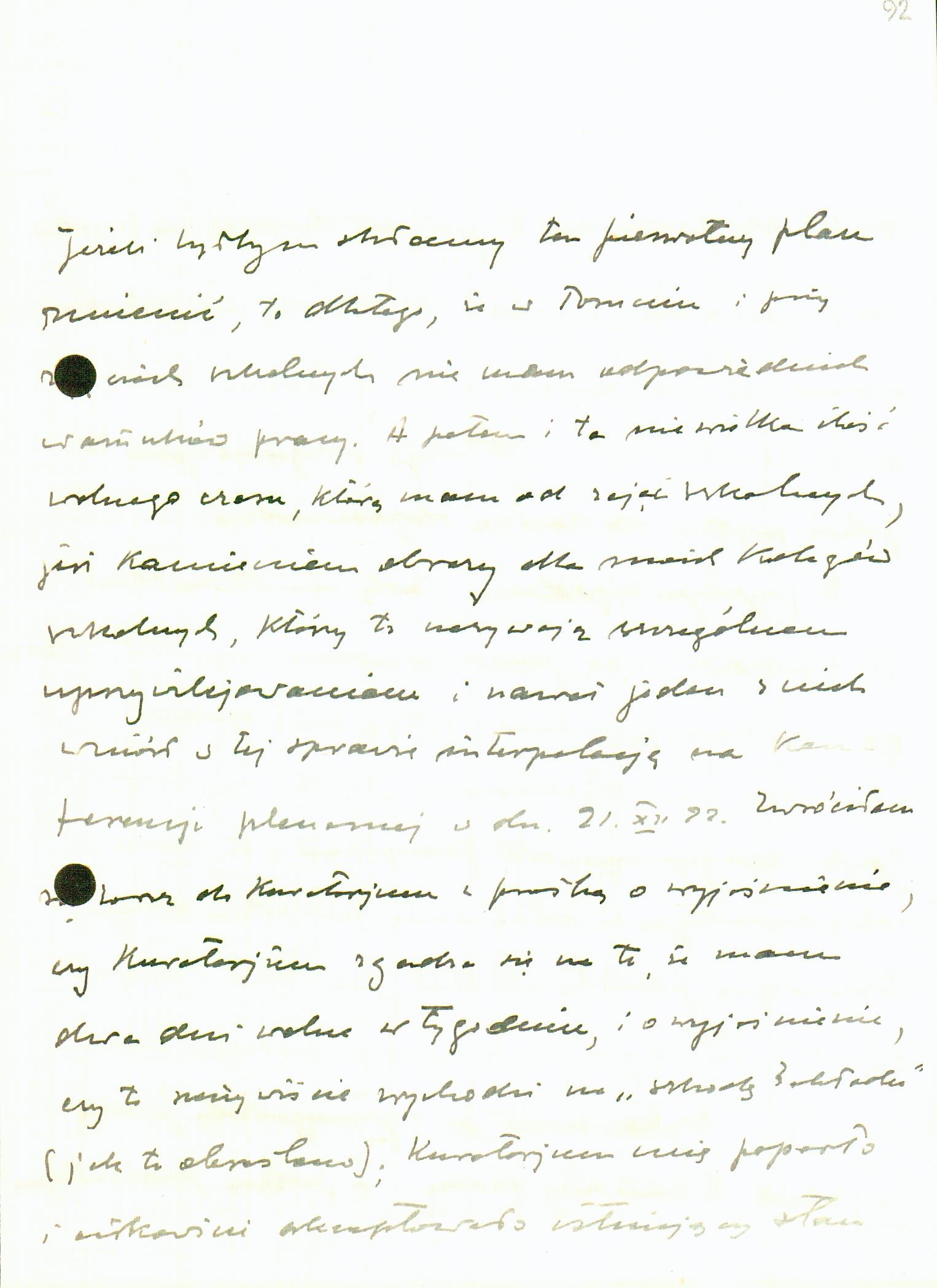 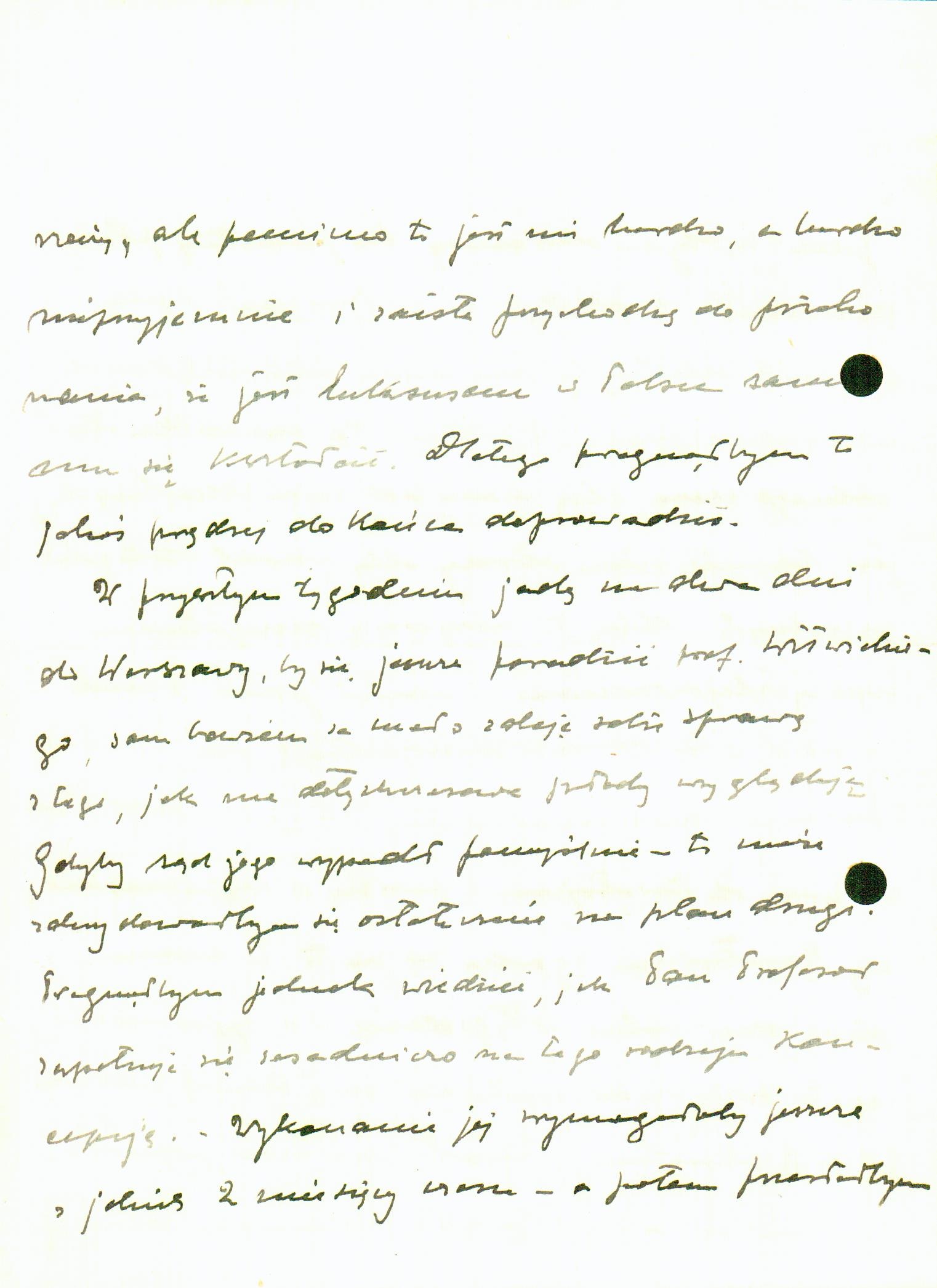 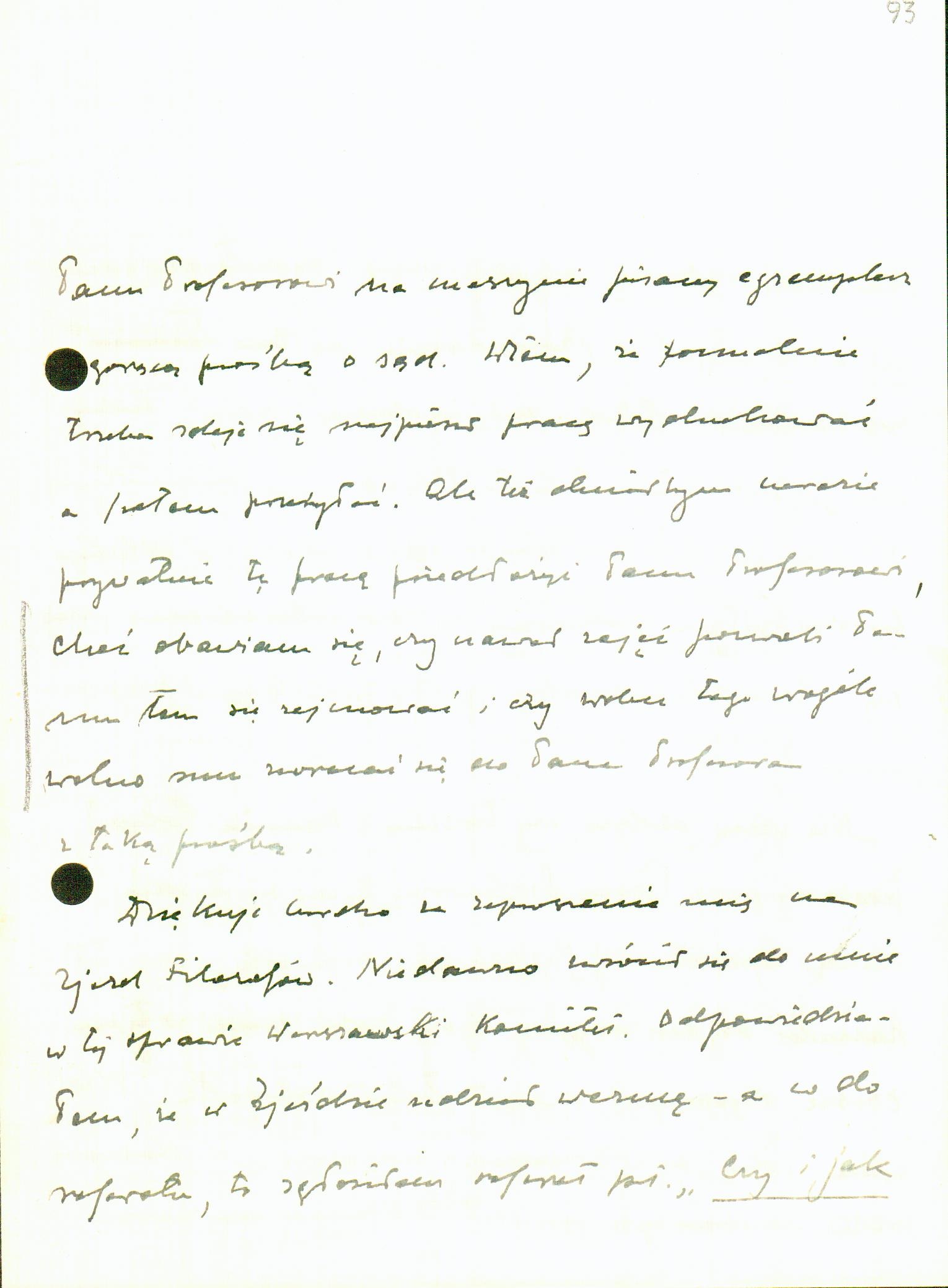 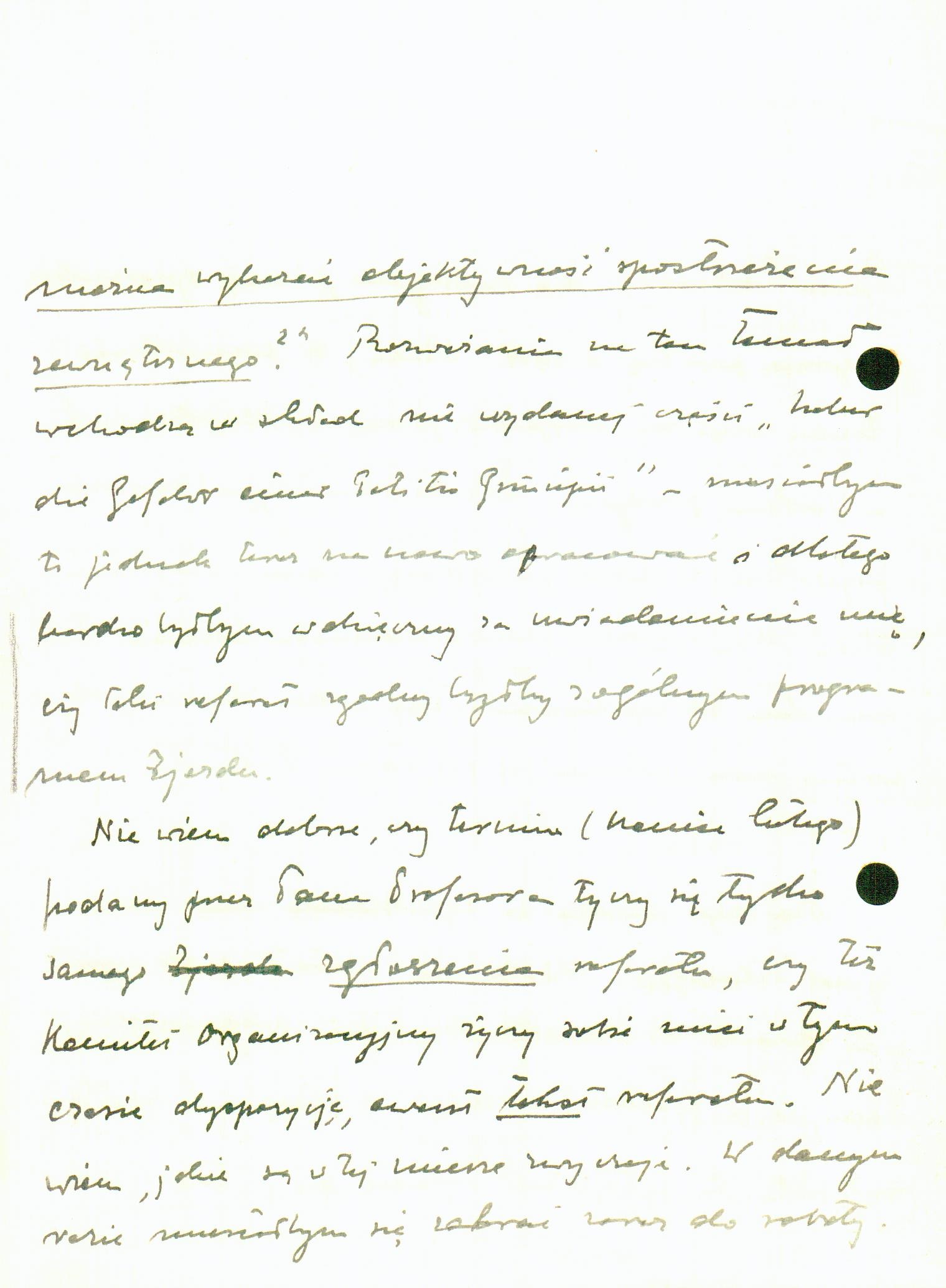 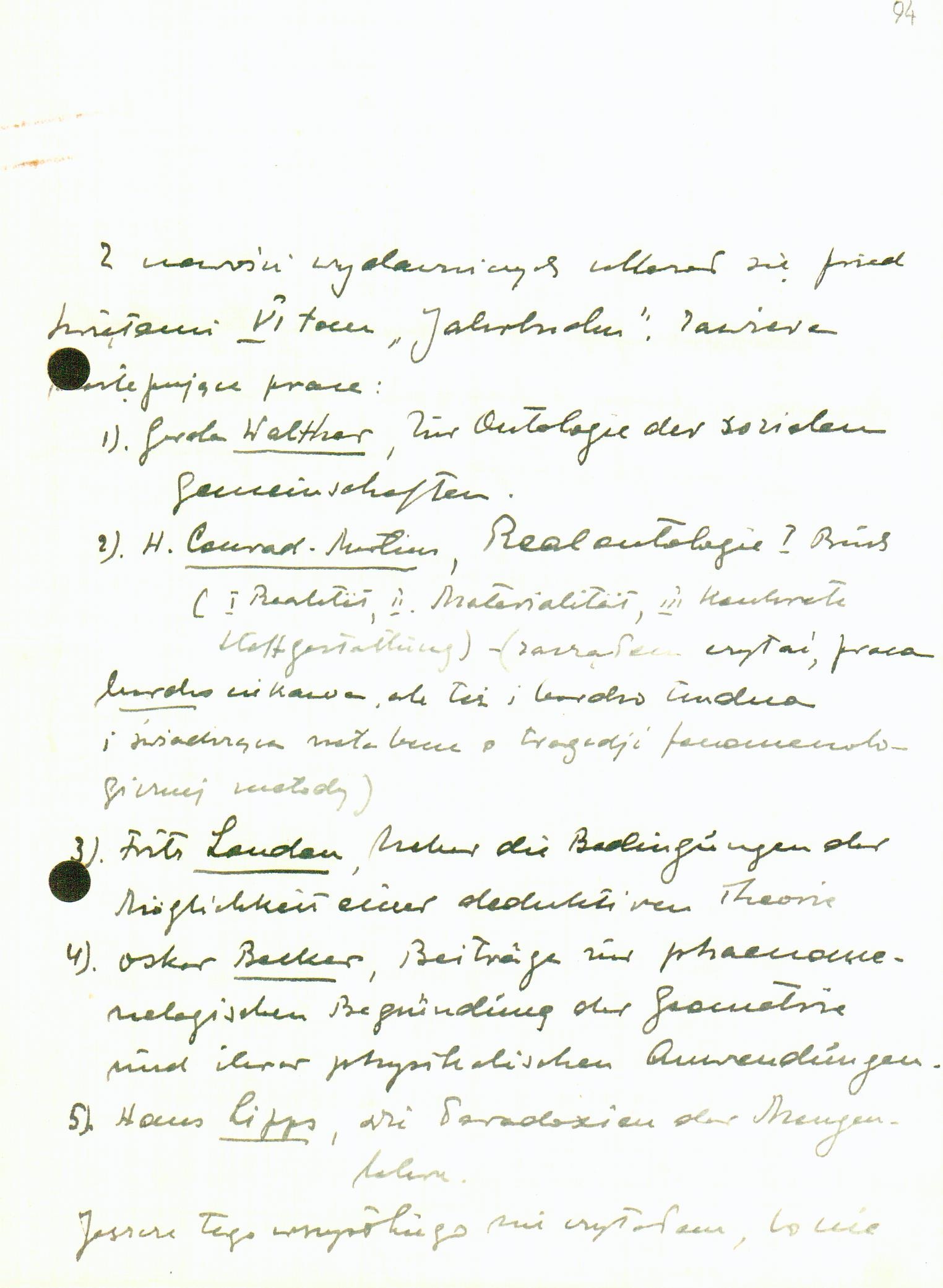 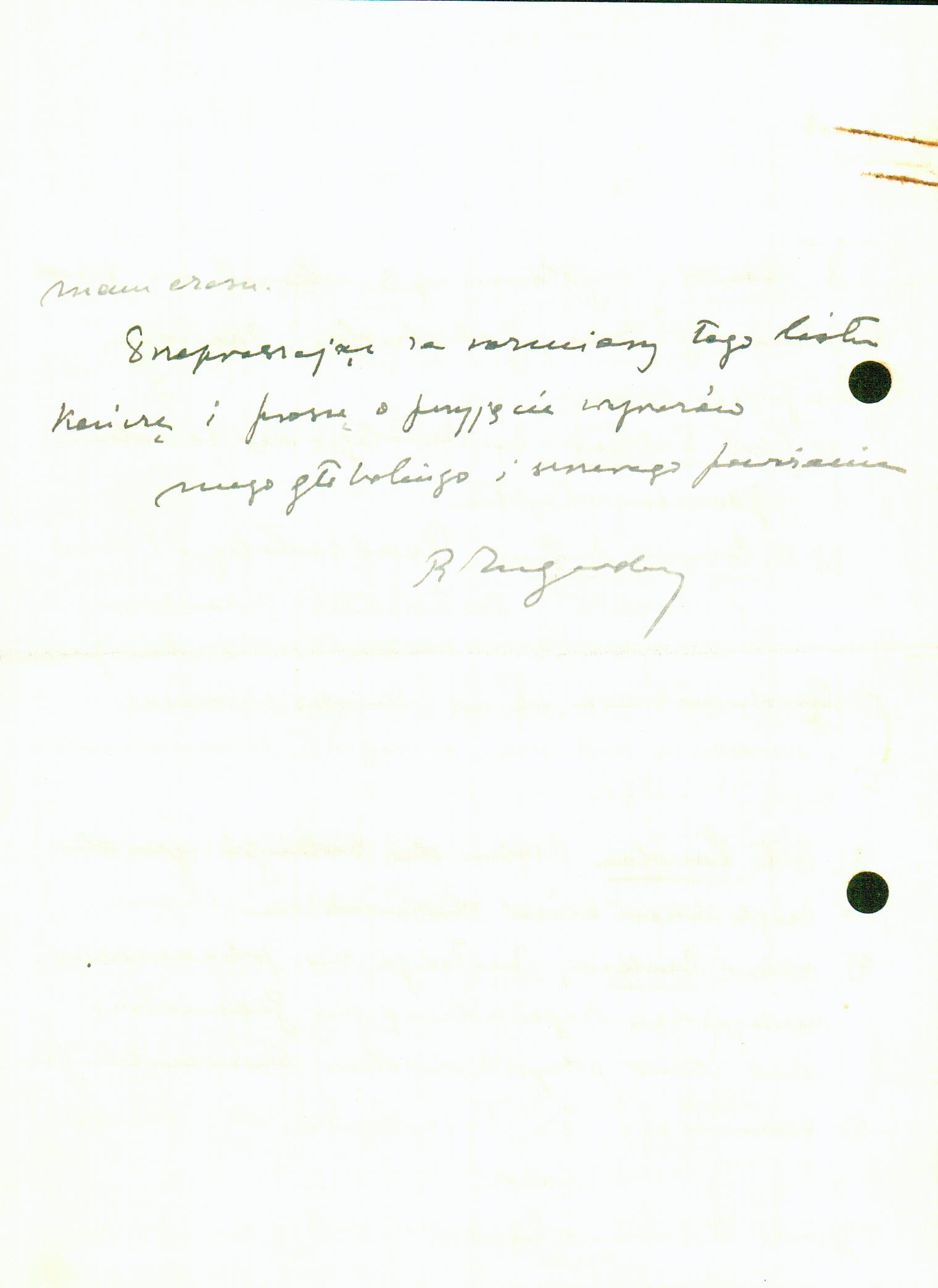 Most fervent thanks for the letter I received two days ago, and for so many proofs of your kindness towards me. The trip to Lviv for your Great Jubilee was a pure pleasure for me, since I was able, even in this small way, to express my gratitude to you for introducing me to philosophical studies, which enabled me to subsequently continue my studies in Göttingen, as well as for your interest in me personally, which you’ve demonstrated so often. I regret only that, due to various circumstances in my life, I wasn’t able at any point to deliver my paper to the ‘Commemorative Book’ as well. ‒ My stay in Lviv was also a pleasure for me, as it enabled me to renew old ties connecting me with this city and to convince myself that an academic atmosphere which can’t be found in Warsaw or anywhere else prevails there.

I’m very glad that my polemic with Prof. Kotarbiński obtained your approval. I didn’t want to say anything positive, whereas what I nevertheless said was aimed at preventing certain misunderstandings. Whether that was successfully accomplished, I don’t know. I’d be curious as to what two germs of definitions you noticed. Yesterday I read the article and came away with the impression that it’s consistent in its tendencies. But that may be because I’m familiar, to a certain extent, with this article’s perspective, which the reader is not. Thus, perhaps it would’ve been better if I’d limited myself to negative argumentation. I couldn’t allow myself positive expressions, as that would have exceeded the framework of the Warsaw Review, something that, given the present state of affairs, still requires quite extensive deliberations. Besides, I still have doubts as to some matters.

You’re right in urging me to concentrate on my habilitation thesis. These assorted polemic articles have been triggered by the need to exchange views, even via this route, since direct communication with people was rendered impossible by my exile to the desert of Toruń. Anyway, I haven’t forgotten about my thesis. Currently, I’ve got over 200 notebook pages written on this topic ‒ unfortunately, it’s a long way from finished. The situation at the moment looks like this: either I carry out my original plan, in which case, given the amount of time I have at my disposal, it would probably require at least another year; or I throw out that original plan and, instead of a dissertation on identity, I give you something else. Specifically, the first chapter of the dissertation deals with an issue that has nothing to do directly with the issue of the identity of an object: it consists of reflections on the various meanings of the question ‘what is x?’ and on what answers can be given to these fundamentally different questions. In recent weeks, I’ve been working on reconstructing this chapter to make it an independent dissertation. Currently I’m finishing this reconstruction. Thus written, the dissertation consists of 100 notebook pgs. ‒ and thus, after converting it to print standards, about 50 pg. of print in Philos. Review. To this, I would attach an ‘Addendum’ comprising the discussion with Prof. Kotarbiński on the subject of ideal objects. (Only a few days ago, the ‘Commemorative Book’ was sent to me from Warsaw. I’m convinced that Prof. Kotarbiński’s article is drawn from my first chapter. Hence this discussion is necessary.) Meanwhile, four of the remaining chapters of the paper on identity ‒ concerning the views of Descartes, Locke, Leibniz, and Hume on this theme ‒ could be reconstructed for the purpose of a critical presentation of the views of these philosophers. Along with this assortment of names, obviously, there would be a fragment which I’d call ‘From studies on identity’. Together, the whole thing could be published as ‘Philosophical Sketches’ … or printed separately in Philosophical Review.

I don’t yet know how to proceed because I’m not familiar with the conditions that must be fulfilled by my habilitation paper. Nor do I know how you view this entire plan. Obviously it would have less value than the paper I originally outlined.

If I’m inclined to modify the original plan, it’s because in Toruń, with my school lessons, I lack suitable working conditions. And then even the small amount of time I have free from school lessons is anathema to my school colleagues, who call it a special privilege; one of them even brought up a question regarding this matter at the plenary conference on 21/12/22. I immediately turned to the Board with a request for clarification as to whether it agrees to my having two days off during the week, as well as for clarification as to whether this truly works to the ‘detriment of the Institution’ (as it was styled); the Board supported me and fully accepted the existing state of affairs, but in spite of that, it is very, very unpleasant, and indeed, I’m becoming convinced that, in Poland, educating oneself is a luxury. Accordingly, I’d like to somehow bring this thing to a swift conclusion.

Next week I’m going to Warsaw for two days, in order to consult again with Prof. Witwicki; indeed, I myself lack a sufficient idea of how my ideas look to this point. If it turns out that his verdict is favourable, maybe I’ll finally decide on the second plan. I’d like to know, however, how, fundamentally, you view this kind of concept. ‒ It would take another two months or so to complete it, and then I’d send you a typewritten copy with a fervent request for a verdict. I know that, formally, it’s evidently necessary to have the paper printed first, then read. But as of now, I’d also like to submit this work to you in private, although I’m worried whether your class load will permit you to deal with it and whether, with that in mind, I can even turn to you with such a request.

Thank you very much for inviting me to the Congress of Philosophers. Recently, the Warsaw Committee addressed me regarding this matter. I replied that I would take part in the Congress ‒ and as for the paper, I submitted a paper entitled ‘Is it possible to demonstrate the objectivity of external observation, and if so, how?’ Reflections on this topic are part of the unreleased part of ‘Ueber [Über] die Gefahr einer Petitio Principii’ [On the danger of a petitio principii], but I would have to elaborate them anew, and thus I’d be very grateful for your letting me know whether such a paper would be consistent with the general programme of the Congress.

I don’t really know whether the deadline (end of February) you cited concerns only the submission of the paper, or whether the Organising Committee wishes to have an outline or possibly the text of the paper. I don’t know what is customary in this respect. In the latter case, I’d have to get to work right away.

In terms of publishing news, Volume VI of Jahrbuch [(Philosophical) Yearbook] came out before the holidays, including the following papers:

2). H. Conrad-Martius, Realontologie I Buch [Realontology Book I] (I. Realität, II. Materialität, III. Konkrete Stoffgestaltung [I. Reality, II. Materiality, III. Specific composition of material] ) – (I started to read it; the paper was very interesting, but also very difficult, and testified, nota bene, to the phenomenological tragedy of the method)

I haven’t read all of this yet, because I don’t have time. I’ll conclude with an apology for the length of this letter, and a request for you to accept expressions of my profound and sincere esteem

Letter to the Committee of the Library of Classics of Philosophy written 30.09.1954