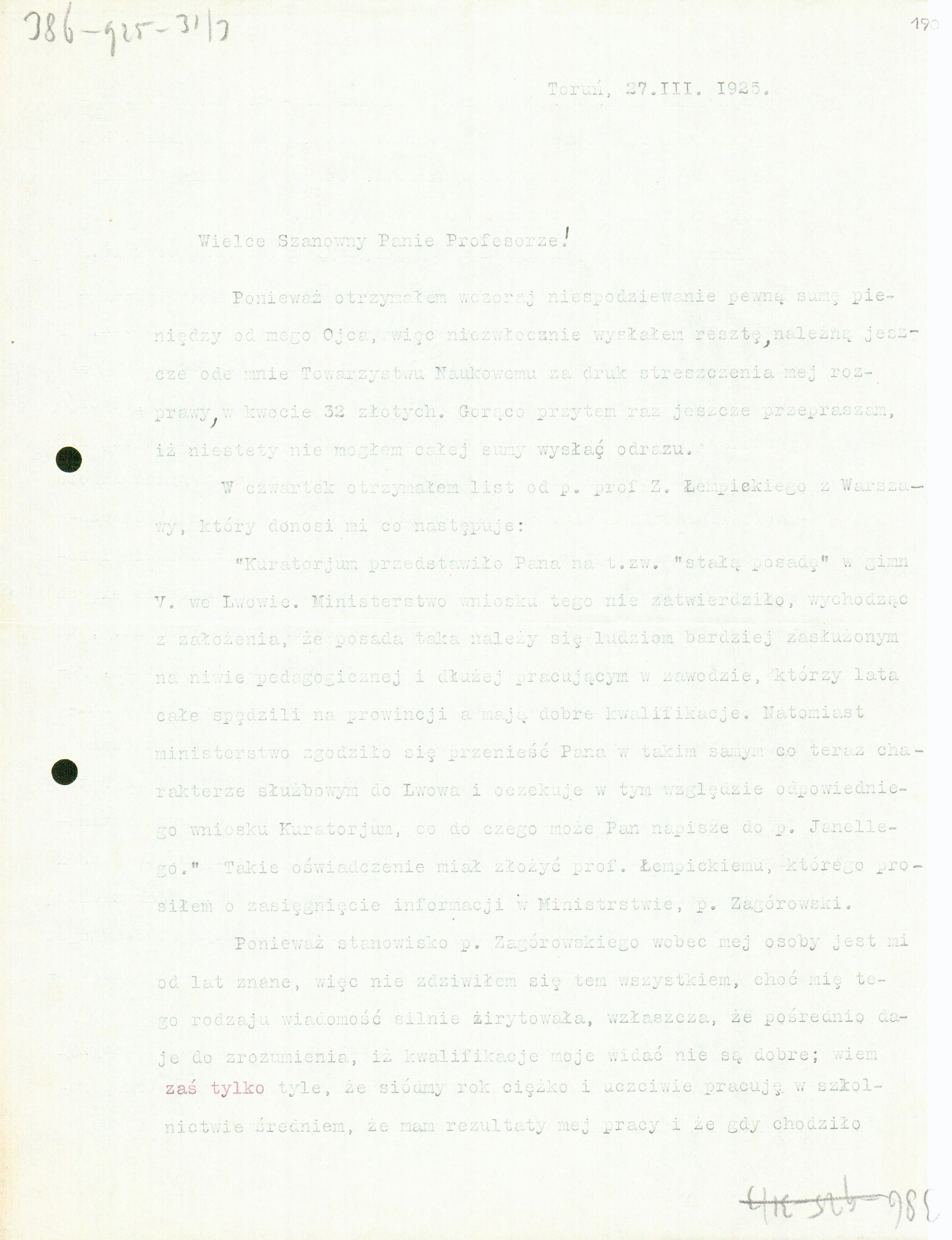 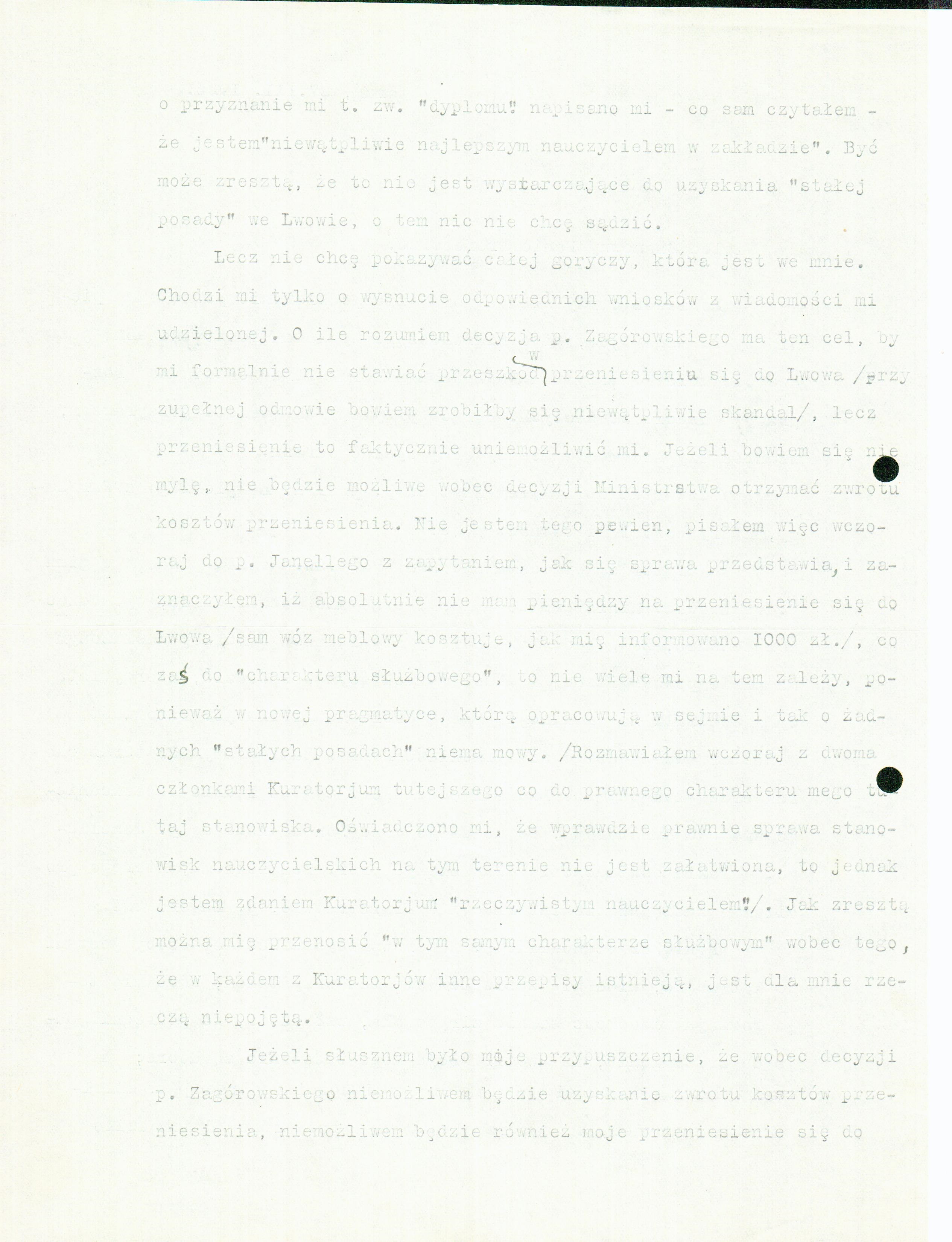 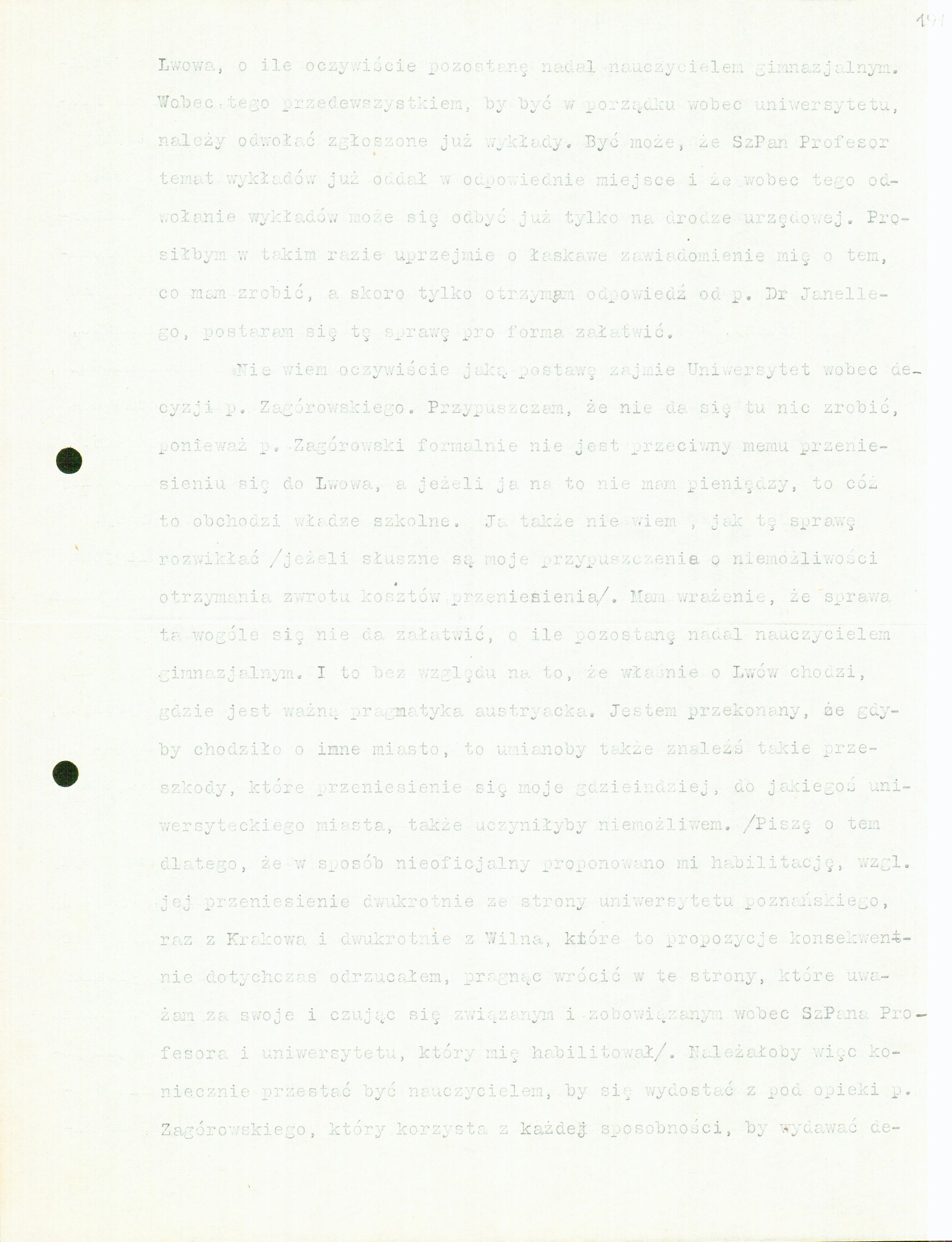 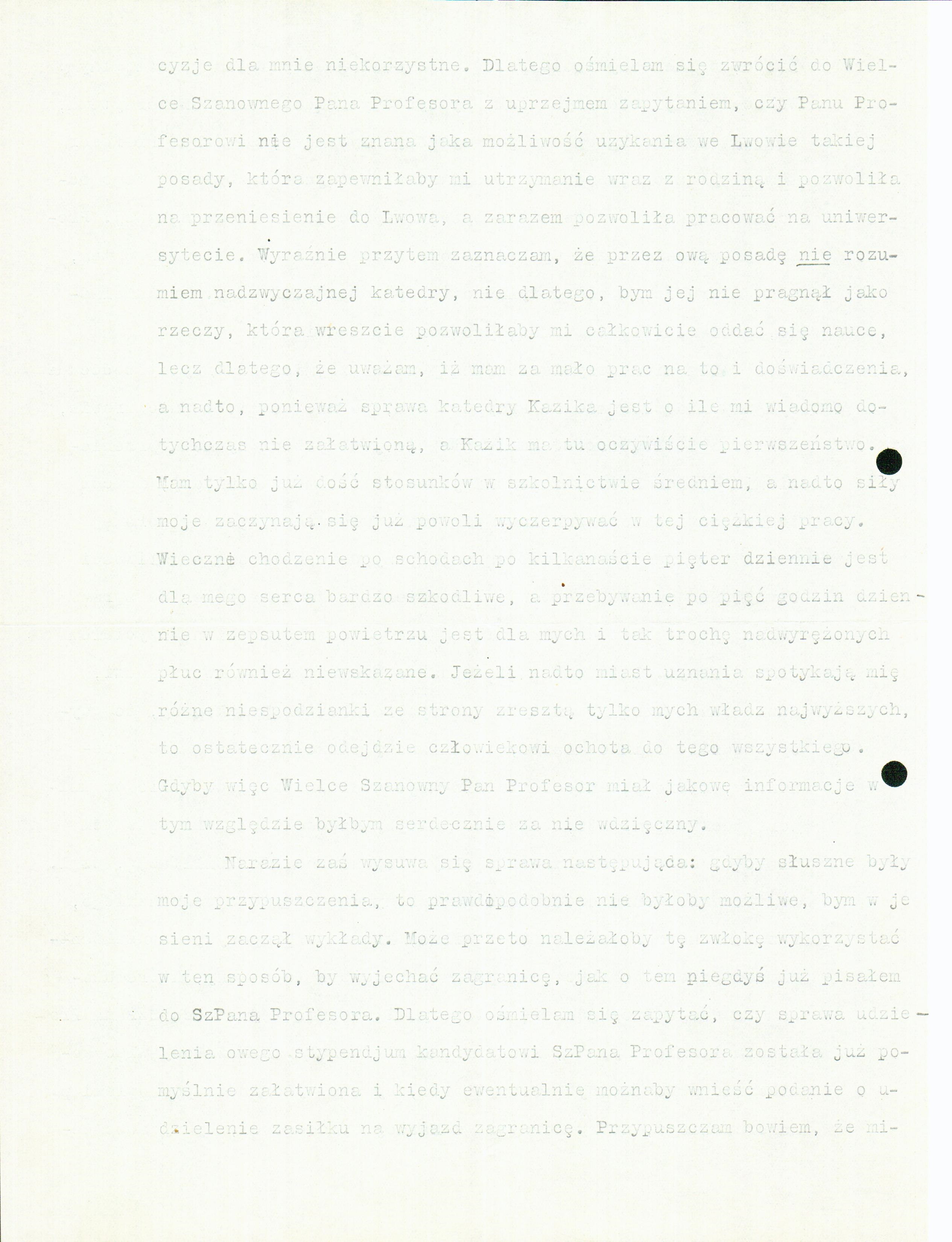 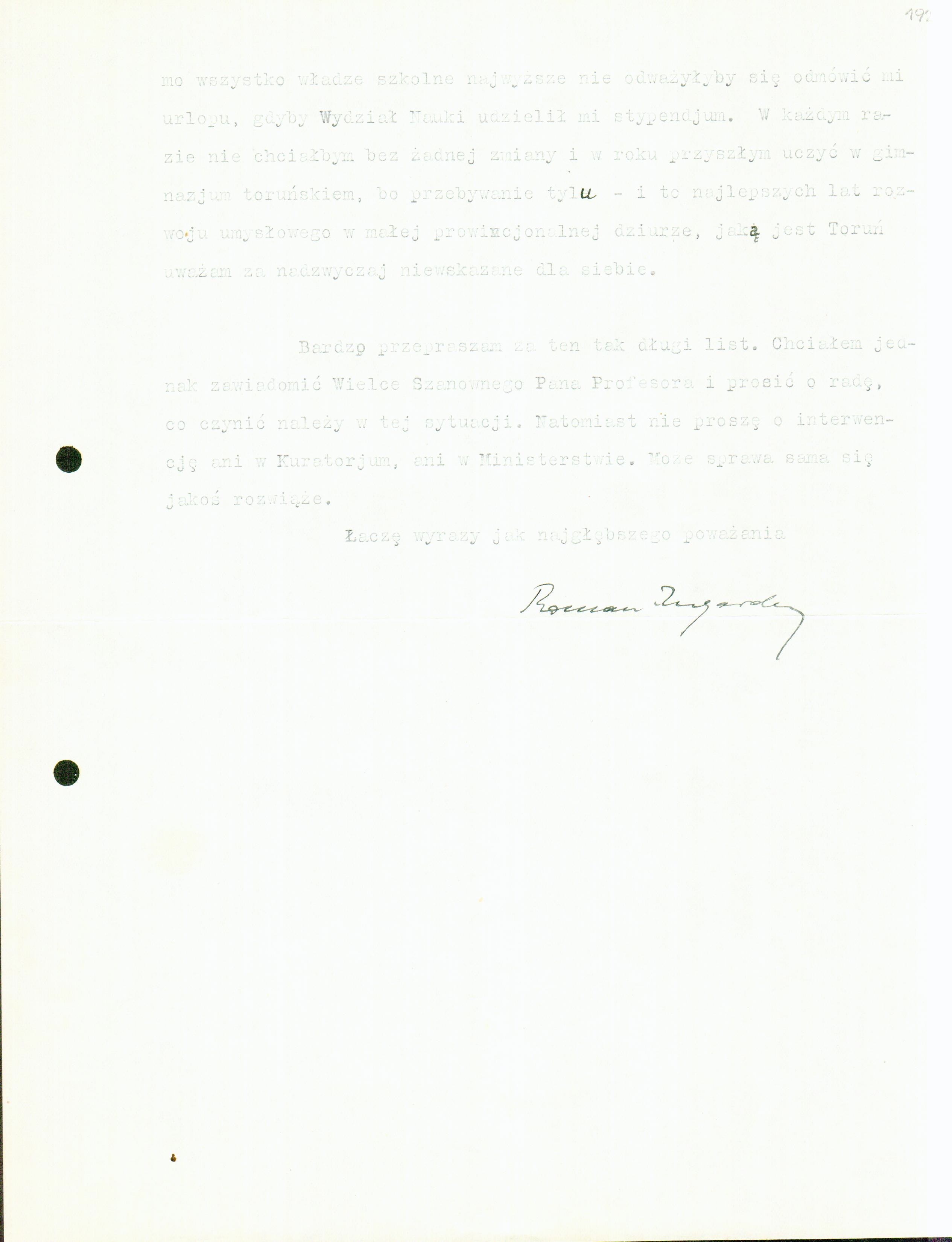 Because I unexpectedly received a certain sum of money yesterday from my Father, I sent without delay the remainder still due from me to the Scientific Society for printing the summary of my dissertation, in the amount of 32 zlotys. I once again fervently apologise for unfortunately not being able to send the whole amount right away.

On Thursday, I received a letter from Prof. Zygmunt Łempicki, from Warsaw, who informs me as follows:

‘The Board has presented you with a so-called ‘permanent position’ in middle school no. 5 in Lviv. The Ministry has not approved this proposition, on the basis of the assumption that such a position should go to individuals more deserving in the pedagogical sphere, who have been working in the profession longer, who have spent many years in the provinces, and who possess strong qualifications. However, the ministry has agreed to transfer you, at the same professional level as at present, to Lviv, and expects in this regard an appropriate application from the Board, regarding which you may write to Mr Janelli’. This statement was supposed to have been submitted to Prof. Łempicki, whom I asked to obtain information from the Ministry, by Mr Zagórowski.

Because Mr Zagórowski’s position with regard to myself has been known to me for years, I wasn’t surprised by any of this, although news of this kind irritated me badly, especially since it indirectly implies that my qualifications are apparently inadequate, whereas I know only that I’ve been working hard and honestly in secondary education for seven years, that I have had results from my work, and that when it was a question of granting me a so-called ‘diploma’, it was written – as I’ve read myself – that I was ‘undoubtedly the best teacher in the institution’. Perhaps, though, this is not sufficient to obtain a ‘permanent position’ in Lviv, concerning which I don’t wish to judge.

But I don’t want to display all the bitterness I have within me. I’m concerned only with drawing the appropriate conclusions from the message I received. As I understand it, Mr Zagórowski’s decision, while not creating any obstacles to my relocation to Lviv (since an out-and-out refusal would undoubtedly create a scandal), is aimed at practically preventing me from accomplishing it. Unless I’m mistaken, then, it won’t be possible, given the Ministry’s decision, to receive any reimbursement for the costs of relocation. I’m not certain of this, and therefore I wrote to Mr Janelli yesterday asking where the matter stands, and pointing out that I absolutely have no money to relocate to Lviv (just the moving van for furniture costs, as I was informed, 1000 zlotys); whereas, concerning the ‘professional level’, for me nothing much depends on that, since, in line with the new regulations they are developing in the Sejm [Polish parliament], there’s no question of ‘permanent positions’ anyway. (I spoke yesterday to two members of the local Board regarding the legal character of my position here. I was informed that, admittedly, in legal terms, the question of teaching positions in this area has not been settled; nevertheless, I am, in the opinion of the Board, a ‘bona fide teacher’. How it’s possible, then, to transfer me ‘at the same professional level’, given the fact that different rules exist for each Board, is incomprehensible to me.

If my assumption that it’s impossible, in the face of Mr Zagórowski’s decision, to obtain a refund of my relocation costs, it will likewise be impossible for me to move to Lviv, assuming, of course, that I remain a middle-school teacher. Therefore, first of all, to be fair to the university, the lectures that have already been announced should be cancelled. Possibly you’ve already handed in the lecture topics to the appropriate office and that, therefore, the cancellation of the lectures can only be done through official channels. In that case, I’d politely ask you to graciously inform me what I should do, and as soon as I receive an answer from Mr Janelli, I’ll attempt to settle this matter pro forma [Latin: according to form].

Of course, I don’t know what attitude the University may take regarding Mr Zagórowski’s decision. I suppose that nothing can be done here, since formally Mr Zagórowski is not opposed to my relocation to Lviv, and if I don’t have the money for it, what business is that of the school authorities? Nor do I know how to untangle this matter (if my guesses concerning the impossibility of receiving any reimbursement of transfer costs are correct). I have the impression that the matter can’t be settled at all as long as I remain a middle-school teacher. And this is irrespective of the fact that this concerns Lviv, where Austrian regulations are in force. I’m convinced that if this concerned a different city, obstacles to my relocation elsewhere, to some university city or other, could also be found to render it impossible. (I’m writing about this because I’ve been unofficially offered habilitation, that is, relocation, twice by the University of Poznań, once by Cracow, and twice by Vilnius; so far I’ve consistently rejected these proposals, wishing to return to the part of the country I consider home and feeling bound and obligated to you and to the university that accomplished my habilitation.) Thus it’d be necessary to give up being a teacher in order to get out of the jurisdiction of Mr Zagórowski, who makes use of every occasion to issue decisions unfavourable to me. Therefore, I’m taking the liberty of turning to you with a polite inquiry as to whether you know of any possibility of obtaining a position in Lviv that would assure myself and my family a living and enable me to relocate to Lviv, and at the same time allow me to work at the University. I want to indicate clearly that by such a position I don’t mean an associate professorship, not because I wouldn’t want it, as something that would finally enable me to completely devote myself to original philosophy, but because I don’t think I have a sufficient body of work or experience for it, and moreover, because the matter of Kazik’s [Kazik Ajdukiewicz’s] position is, as far as I know, unsettled as yet, and Kazik, of course, has priority in this case. It’s just that I’ve already had enough of the situation in middle-school education, and moreover my strength is slowly being exhausted in this difficult work. Eternally climbing stairs, a dozen or so flights a day, is extremely detrimental for my heart, and spending five hours a day in bad air is contraindicated for my overtaxed lungs as well. If, moreover, instead of acknowledgement, I encounter assorted surprises from the highest authorities … well, ultimately a man’s will to cope with all of this abandons him. Thus if you have any information in this regard, I’d be cordially grateful for it.

For now, the matter stands as follows: if my assumptions are correct, it will probably be impossible for me to begin lecturing this autumn. Maybe, then, it would be necessary to take advantage of this delay to travel abroad, as I wrote to you at one point. Therefore, I’m taking the liberty of asking whether the matter of granting that scholarship to your candidate has already been settled favourably, and when it might be possible to apply for an allowance for a trip abroad. For I suppose that, in spite of everything, the highest school authorities would not dare to deny me leave, if the Department of Science were to grant me a scholarship. In any case, I wouldn’t want to teach in the Toruń middle school without any changes, because I consider spending so many years – and, moreover, the best years – of mental development in a little provincial hole like Toruń to be extremely inadvisable for me.

I apologise for this very long letter, but I wanted to inform you and ask for advice as to what to do in this situation. However, I’m not asking you to intervene with either the Board or the Ministry. Perhaps the matter will resolve itself somehow.

I enclose expressions of the most profound esteem