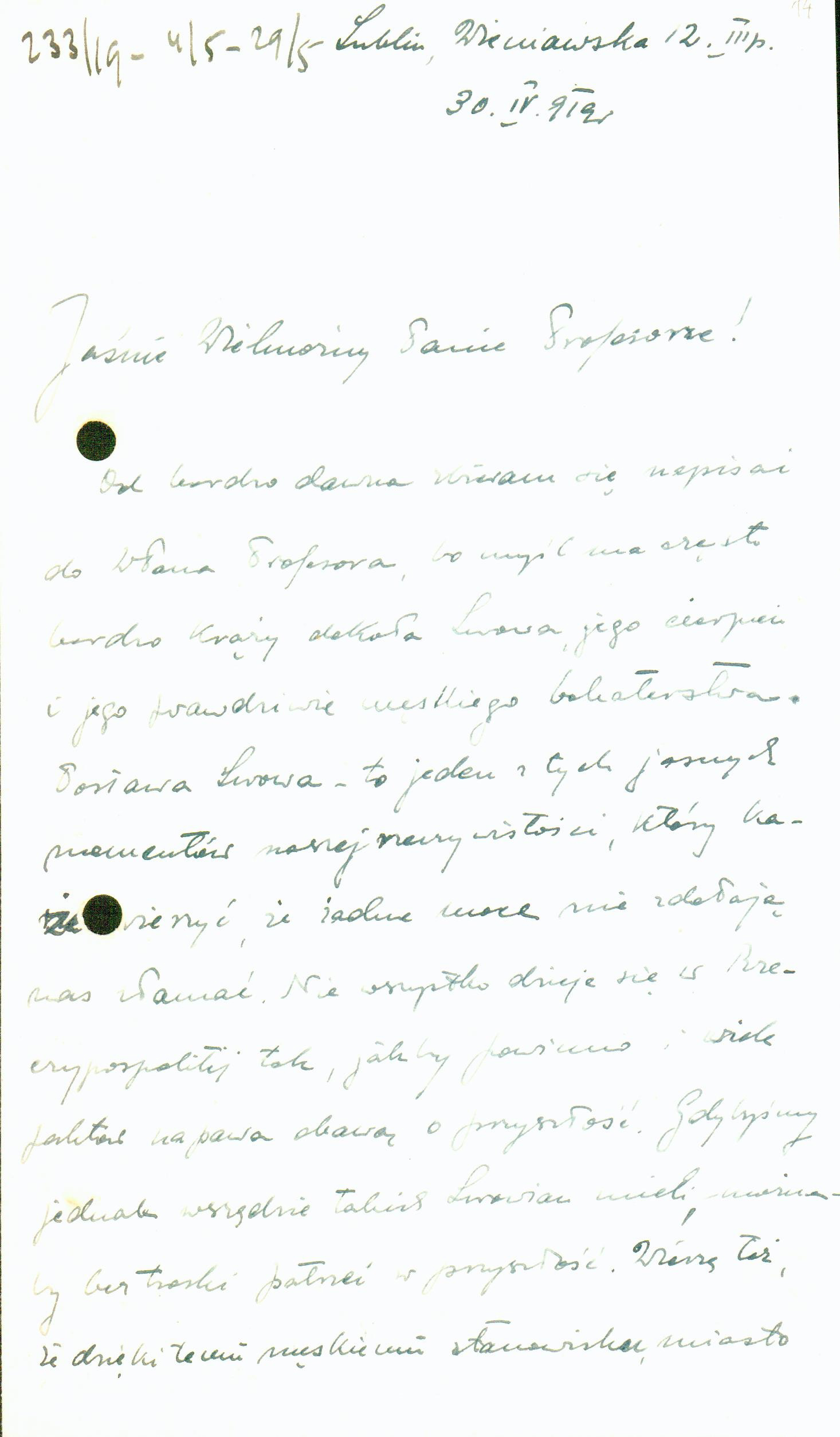 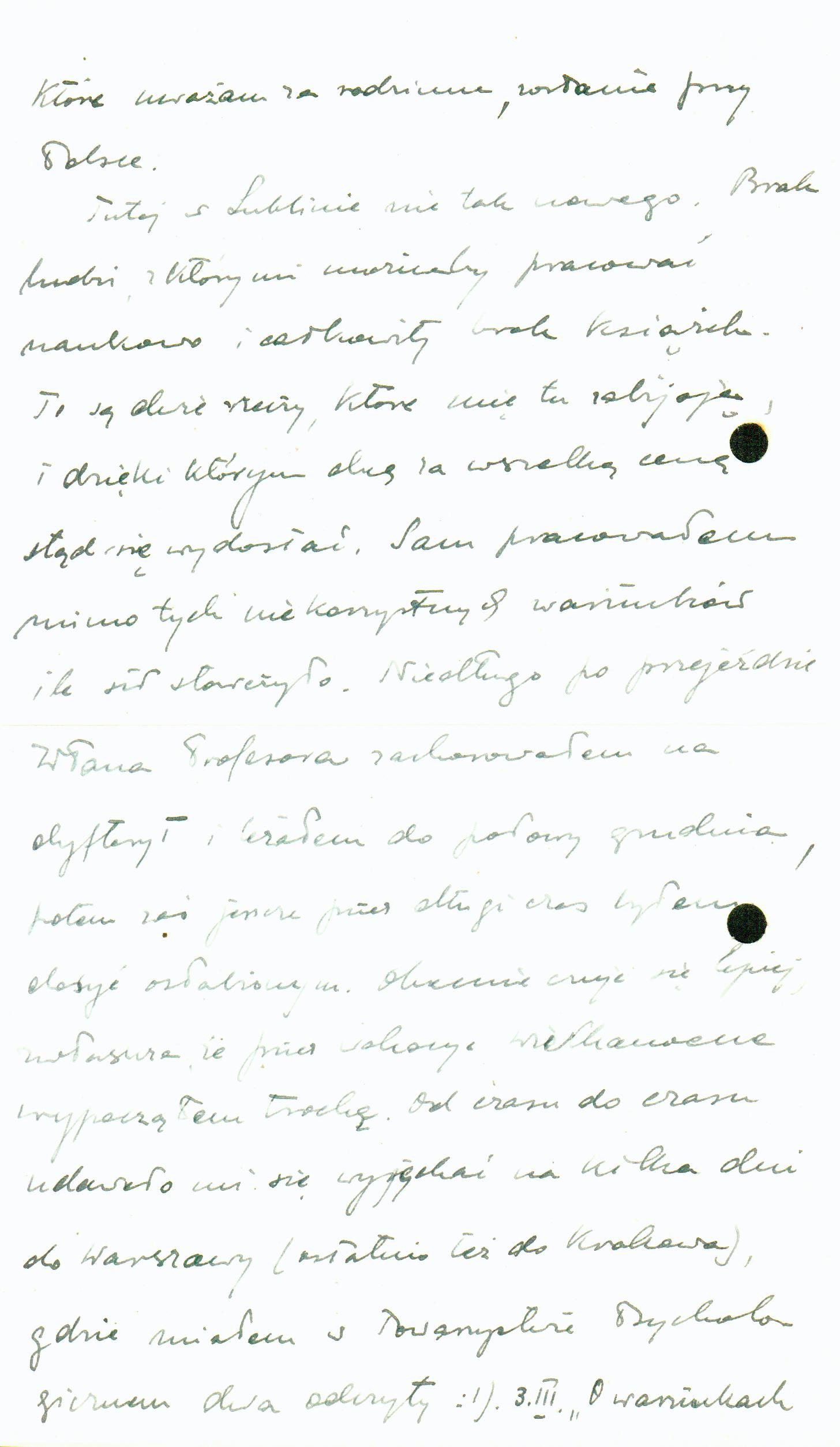 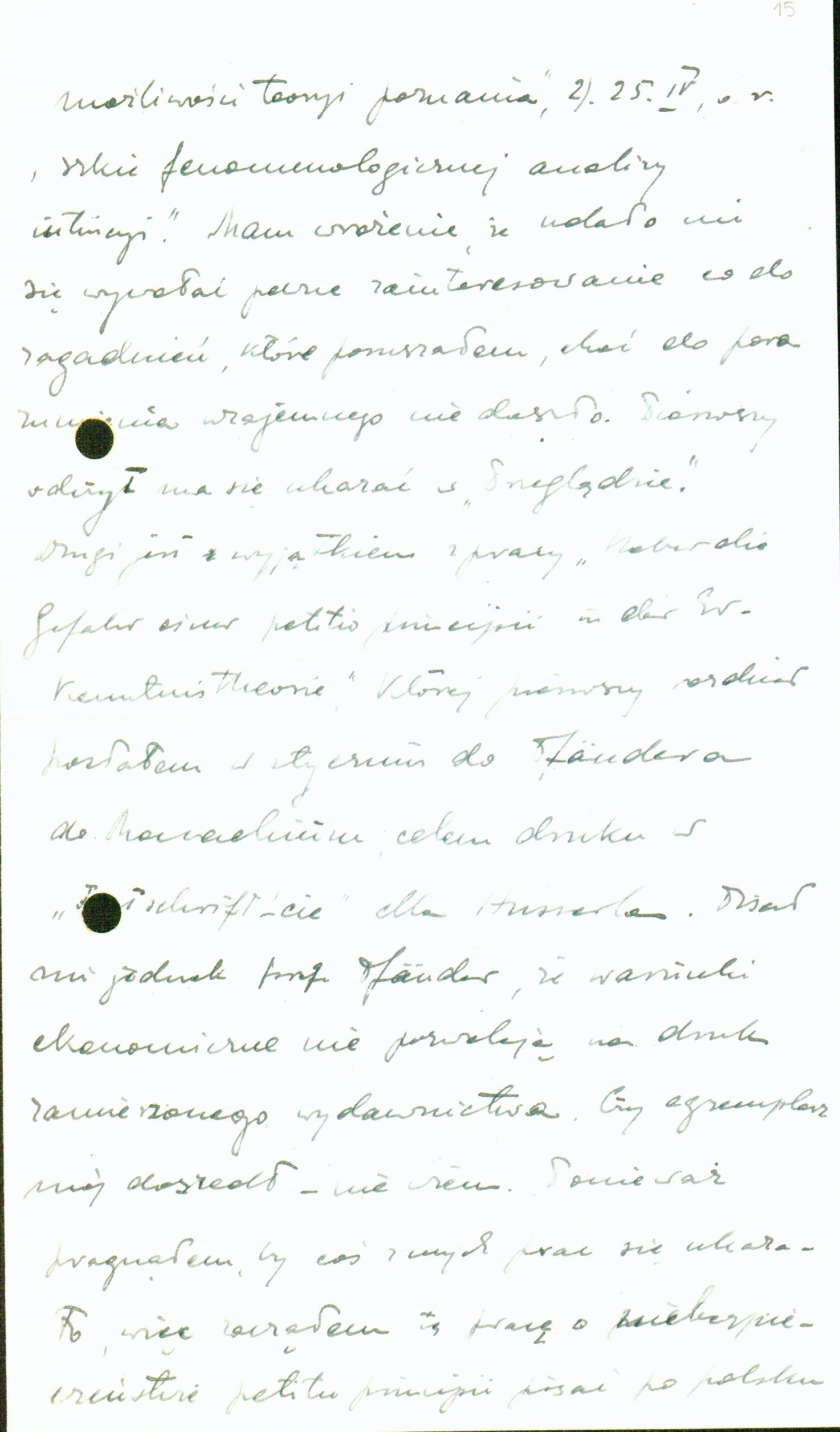 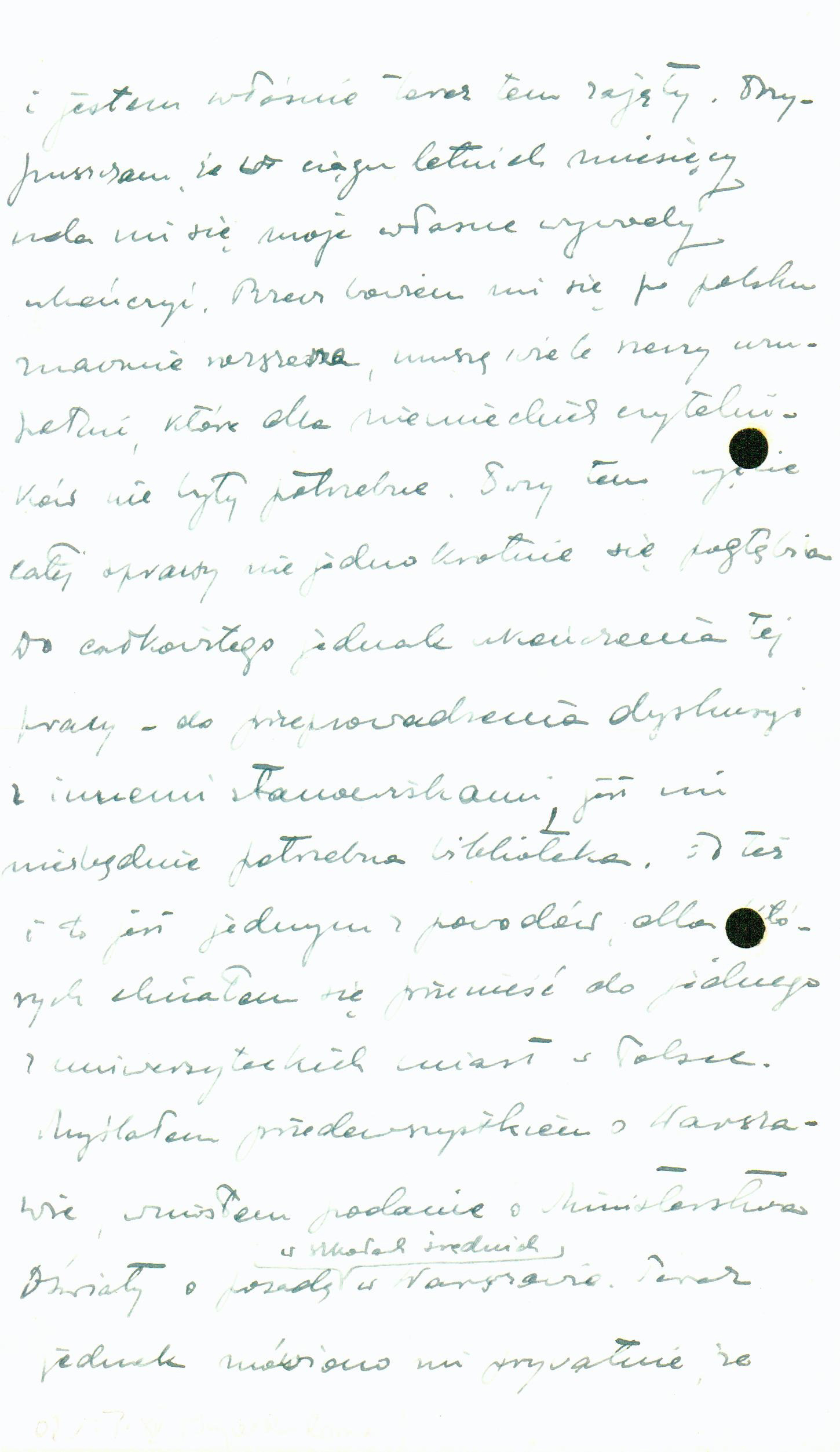 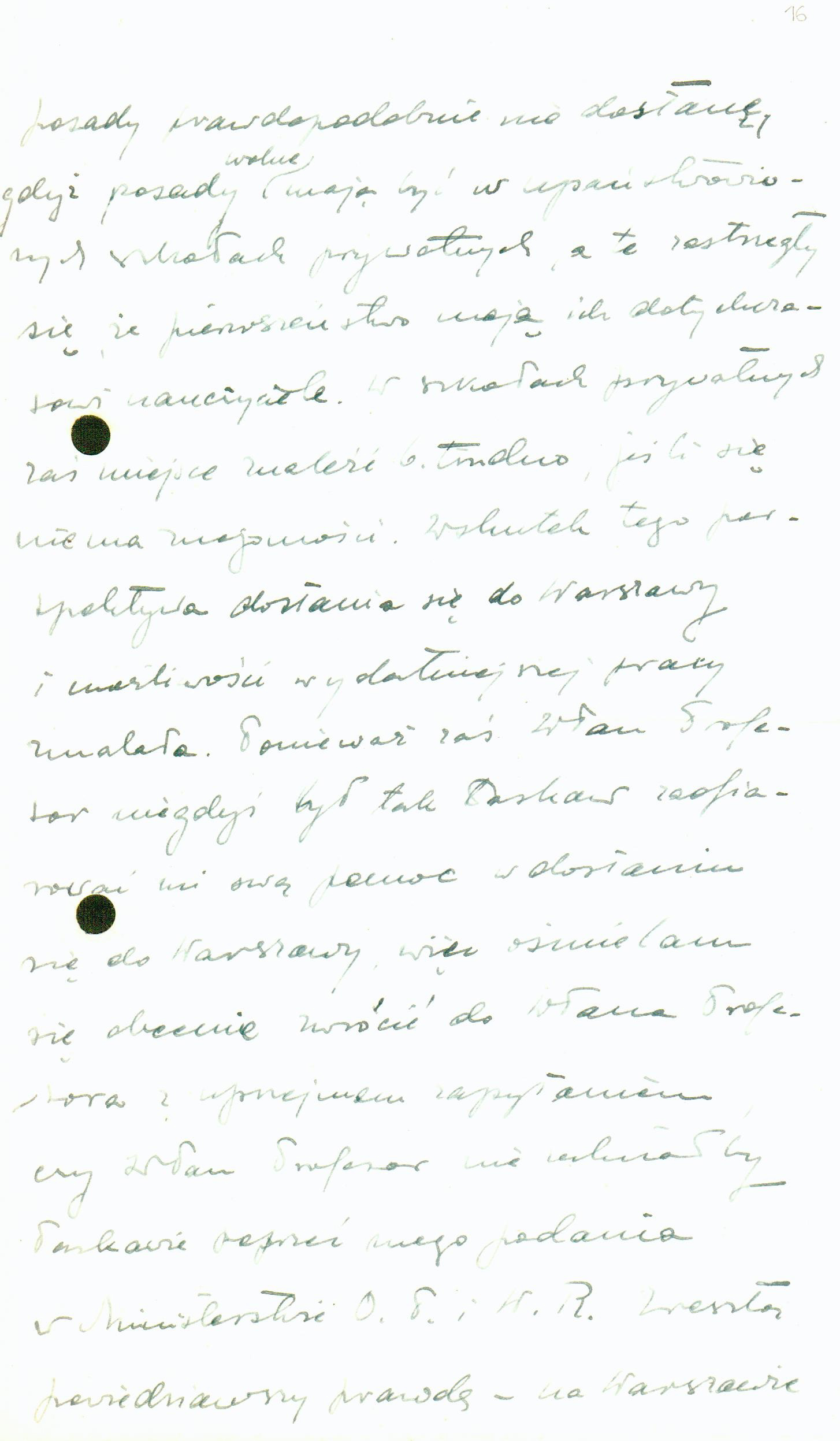 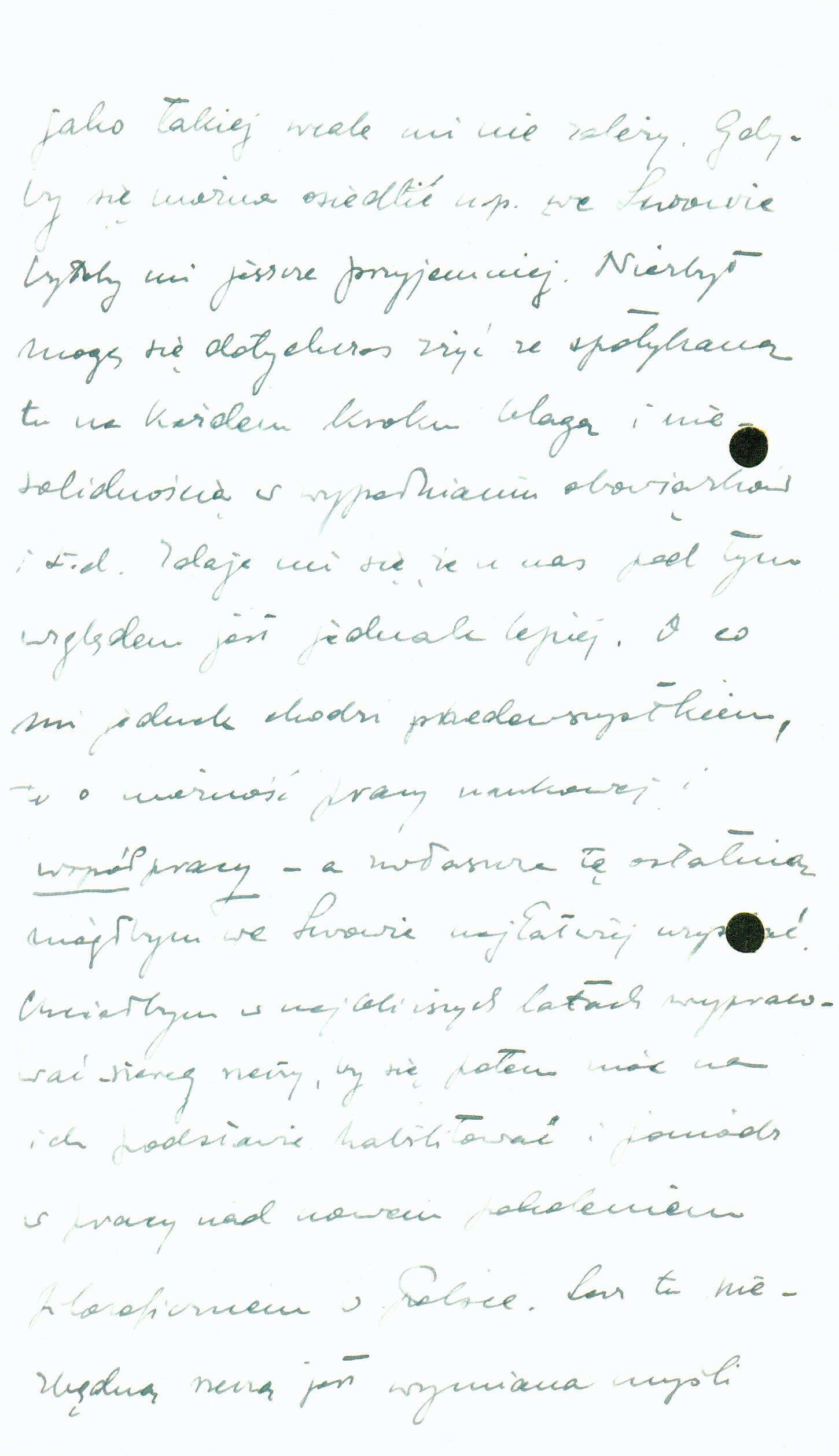 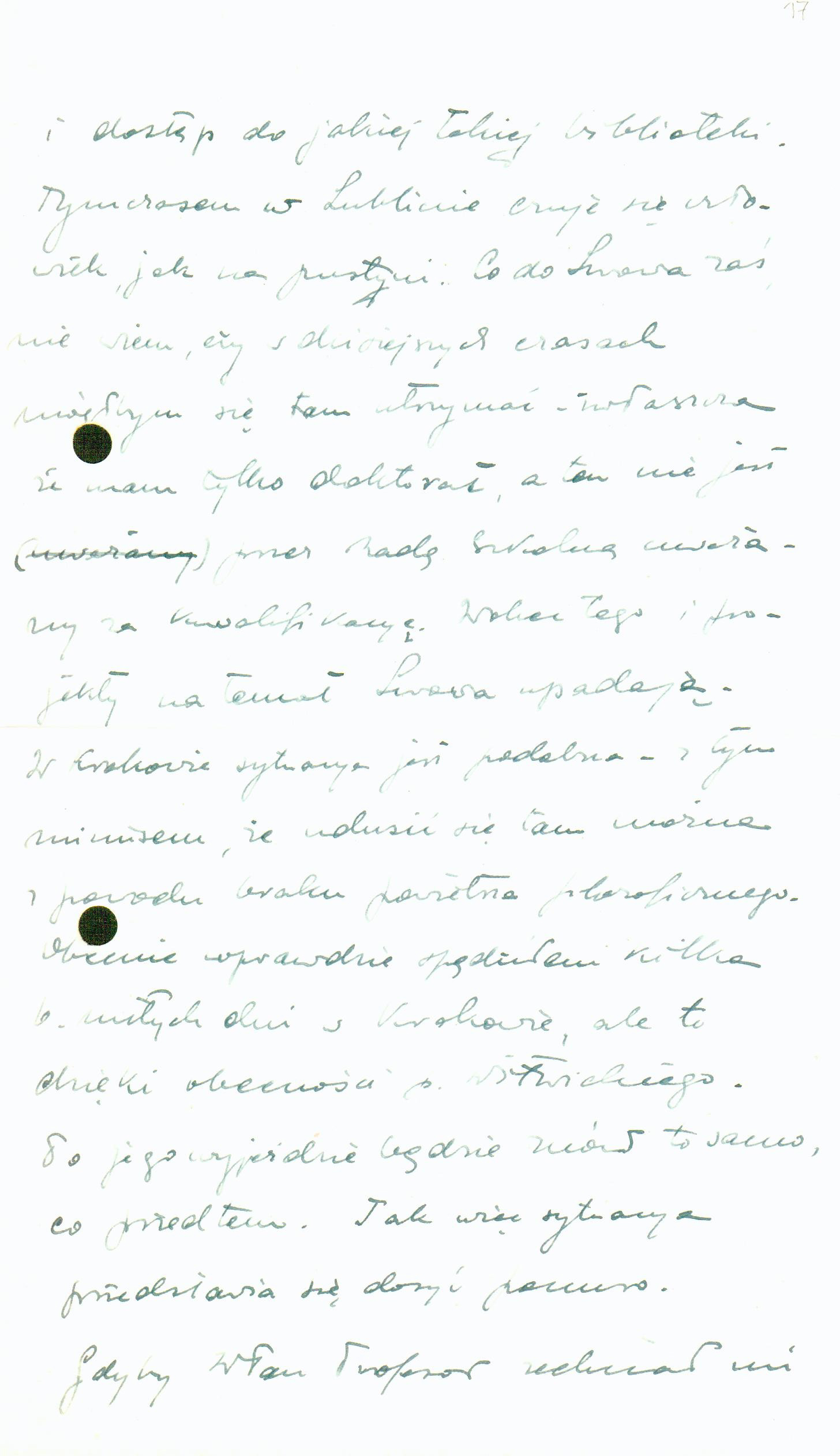 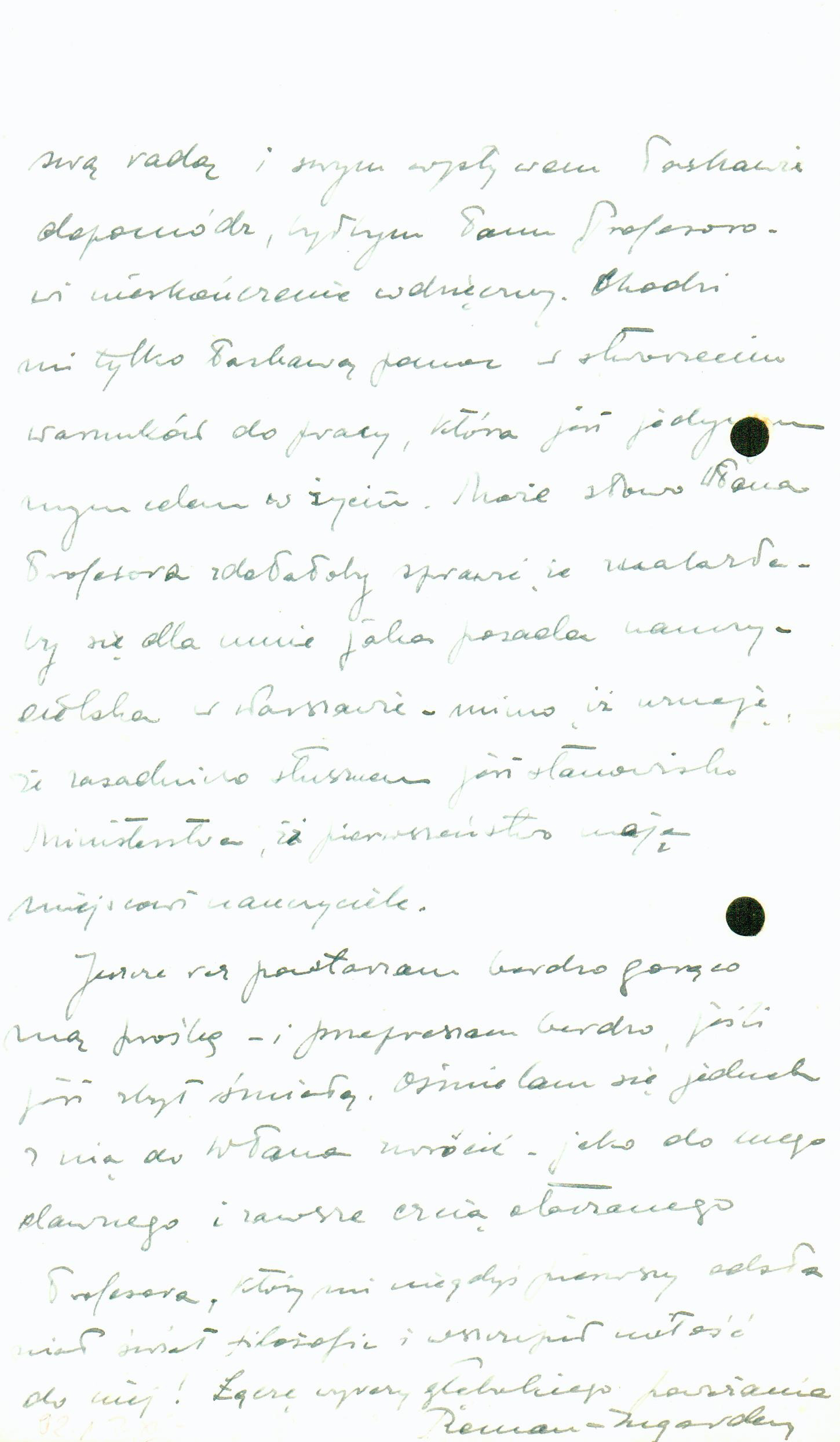 For a long time now I’ve been preparing myself to write to you, as my thoughts very often revolve around Lviv, its sufferings, and its truly manly heroism. The spirit of Lviv is one of those bright moments in our reality which make us believe that no forces can break us. Not everything happens in the Commonwealth as it should, and many facts inspire fear concerning the future. If, however, we had these citizens of Lviv everywhere, we could look ahead fearlessly. I also believe that thanks to this manly position, this city, which I consider home, will remain part of Poland.

Here in Lublin there’s nothing new. No people with whom it might be possible to carry out academic work, and no books at all. These are the big things that are killing me here, as a result of which I want to get out of here at all costs. I’m working on my own, despite these unfavourable conditions, to the extent my strength allows. Soon after you were here, I fell sick with diphtheria and was bedridden until mid-December, and then I was quite weak for a long time. At present I feel better, especially since I rested a bit over the Easter holiday. From time to time, I’ve managed to go to Warsaw for a few days (lately to Cracow as well), where I had two lectures at the Psychological Society: 1). 3/3, ‘On the conditions governing a potential theory of cognition’, 2). 25/4 of this year, ‘An outline of the phenomenological analysis of intuition’. I have the impression that I managed to elicit some interest in the issues I raised, even if no mutual agreement was reached. The former lecture is supposed to appear in Review [Philosophical Review]. The latter is an excerpt from the paper ‘Ueber die Gefahr einer petitio principii in der Erkenntnistheorie’ [On the danger of a petitio principii in epistemology], the first chapter of which I sent to Pfänder[O1]  in Munich in January, with the goal of printing it in the Festschrift [German: commemorative book] for Husserl. However, Prof. Pfänder wrote to me that economic conditions do not permit the printing of the intended publication. Whether or not my copy reached him, I don’t know. Because I wished something from my work to appear, I started writing this paper on the danger of a petitio principii in Polish and in fact am busy with it now. I suppose that over the summer months I’ll be able to complete my own arguments. In Polish, the thing is indeed expanding significantly; I need to supplement many things that weren’t necessary for German readers. At the same time, I’ve expanded my approach to the entire issue more than once. To fully complete the paper, however ‒ to conduct a discussion concerning other positions ‒ I need a library. This, too, is one of the reasons I’ve wanted to relocate to one of the university cities in Poland. I’ve been thinking primarily about Warsaw; I’ve applied to the Ministry of Education for a post in the secondary schools in Warsaw. Now, however, I’ve been told privately that I probably won’t get a post, since, while there are supposed to be vacant posts in nationalised private schools, priority has been reserved for their present teachers. In private schools, meanwhile, places are very hard to find unless one has connections. As a result, the prospect of getting to Warsaw and the chance of finding better work has dimmed. However, since you were once so gracious as to offer me your help in getting to Warsaw, I’m taking the liberty of turning to you with a polite inquiry as to whether you wouldn’t mind supporting my application at the Ministry of Public Education and Religious Denominations. In any case, truth be told, it’s not at all important for me to get to Warsaw per se. If it were possible to settle e.g. in Lviv, it would be even more pleasant for me. To this point I really haven’t been able to live with the sham, the unreliability in the fulfilment of obligations, and so on encountered here at every step. It seems to me, though, that in this respect things are better with us[O2] . However, what I’m concerned with first and foremost is the potential for academic work and co-operation, and especially the latter, which I could most easily get in Lviv. I’d like to work out a number of things in the coming years, so as to be able, on their basis, to obtain my habilitation, as well as to assist me in work on a new philosophical generation in Poland. But here the indispensable thing is the exchange of thoughts and access to a library of some kind. Meanwhile, in Lublin, one feels as if one were in a desert. As for Lviv, though, I don’t know if I could maintain myself there nowadays ‒ especially since I have only a doctorate, which is not considered a qualification by the School Board there. In view of this, plans on the theme of Lviv are also bound to fall through. The situation is similar in Cracow, with this minus: that you can suffocate there from the lack of a philosophical atmosphere. At present, indeed, I’ve spent several very pleasant days in Cracow, but this is thanks to the presence of Mr Witwicki[O3] . Following his departure, it’ll once again be the same as before. So the situation looks rather bleak. If you wouldn’t mind graciously assisting me with your advice and gracious influence, I would be eternally grateful to you. I am referring strictly to gracious help in creating conditions for the work which is my sole objective in life. Perhaps a word from you would make it possible for me to find a teaching post in Warsaw ‒ although I think that the position of the Ministry that local teachers have priority is fundamentally just.

Once again, I repeat my request very fervently ‒ and I’m very sorry if it’s overly bold. I take the liberty nevertheless of addressing this request to you, as my former and always venerated professor who once revealed the world of philosophy to me and instilled me with love of this world!

With expressions of profound esteem