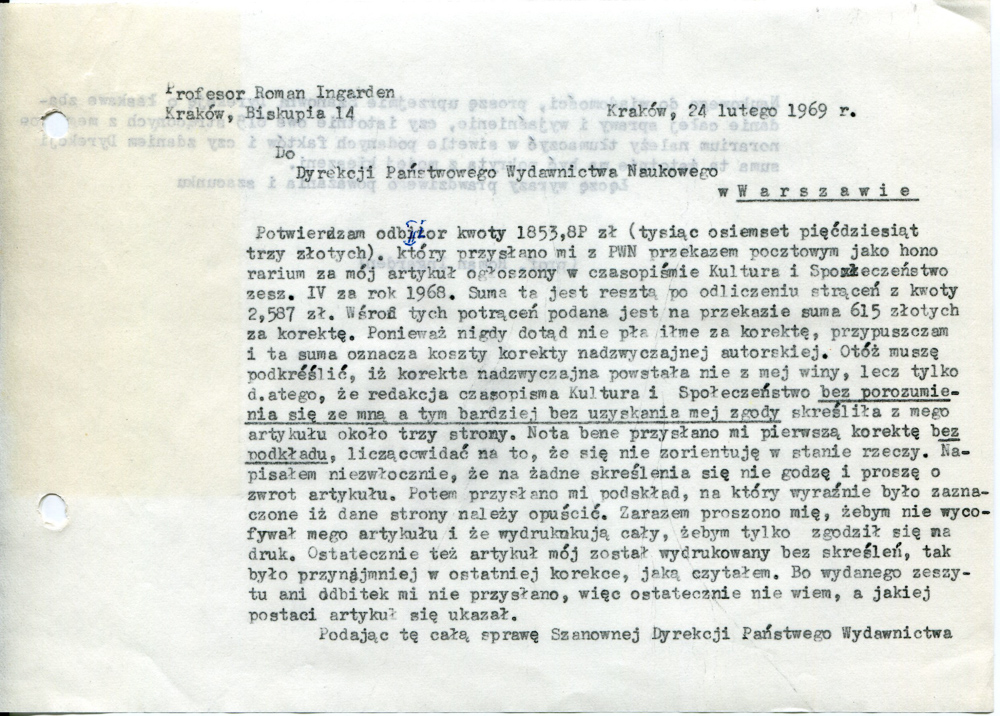 I confirm the receipt of PLN 1853 (one thousand eight hundred and fifty-three zlotys), which I received from the PWN by postal order as remuneration for my article published in No. IV, 1968 of the Culture and Society journal. This is the sum remaining after deductions in the amount of PLN 2587. These deductions include PLN 615 per correction. Since until now I have never paid for corrections, I suppose this sum refers to the costs of extraordinary author’s correction. I must emphasize that I was not responsible for the extraordinary correction being necessary, but instead the situation arose because the editors of the Culture and Society journal, without without obtaining my consent, or even communicating with me, removed about three pages from my article. Not to mention, I was sent the first correction without the original, probably in hopes that I would not notice the situation. I immediately responded that I did not agree to any deletions and would like my article returned. Then I was sent the sub-composition, which clearly specified that the relevant pages should be left out. At the same time, I was asked not to withdraw my article and that it would be printed in its entirety, if I can just agree to its publication. In the end my article was printed without omissions, at least in the last version I received. Because I was not sent the published number of the journal or any copies of it, I do not know what final form the article appeared in.
v         I am hence writing to ask the Honorable Board of Directors of the National Scientific Publishers PWN, to kindly investigate the matter and explain whether the sum of PLN 615 deducted from my remuneration is to be explained by the aforementioned situation and whether, according to the Board of Directors, I should be the one having to cover it.
c                My deepest respect