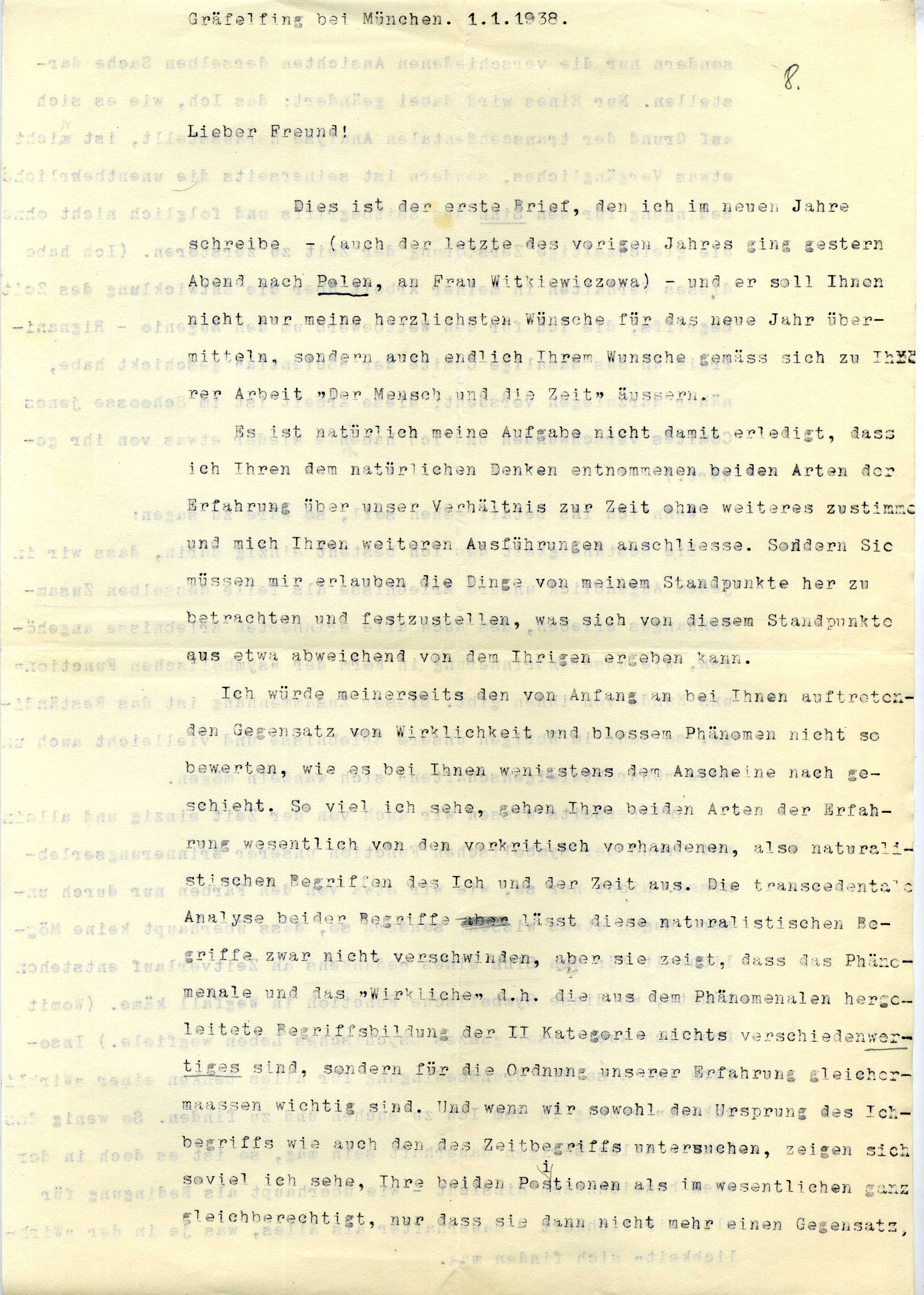 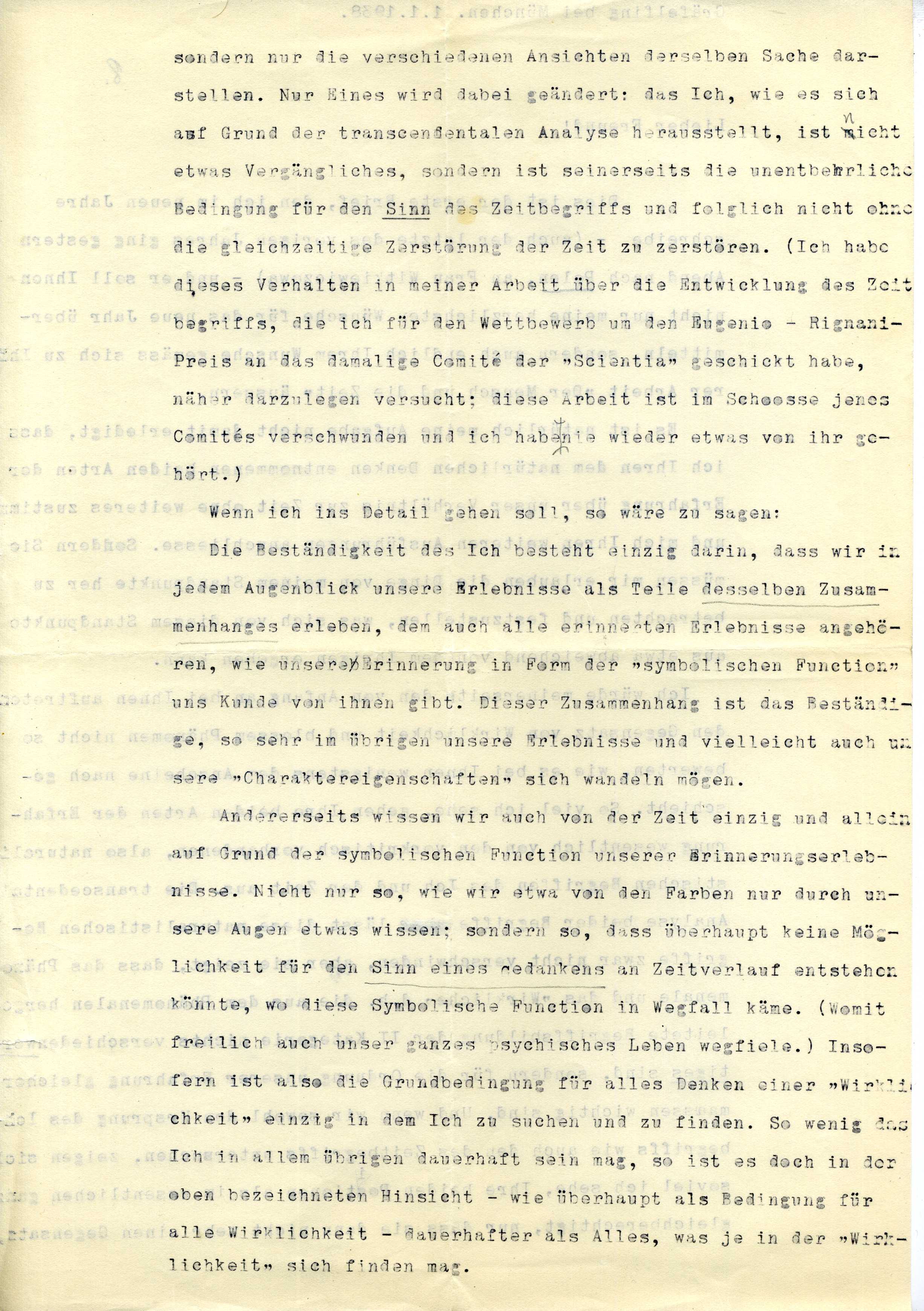 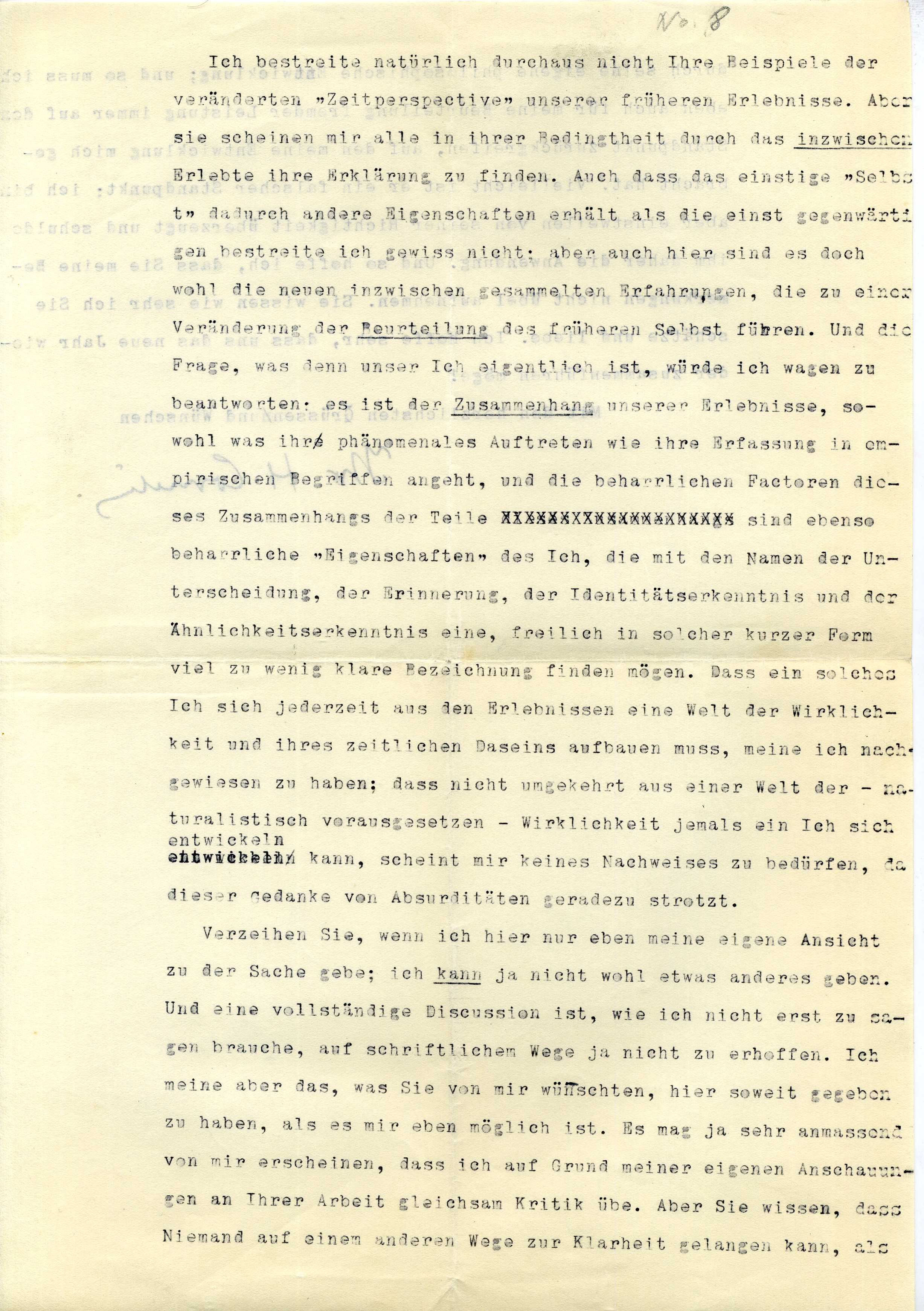 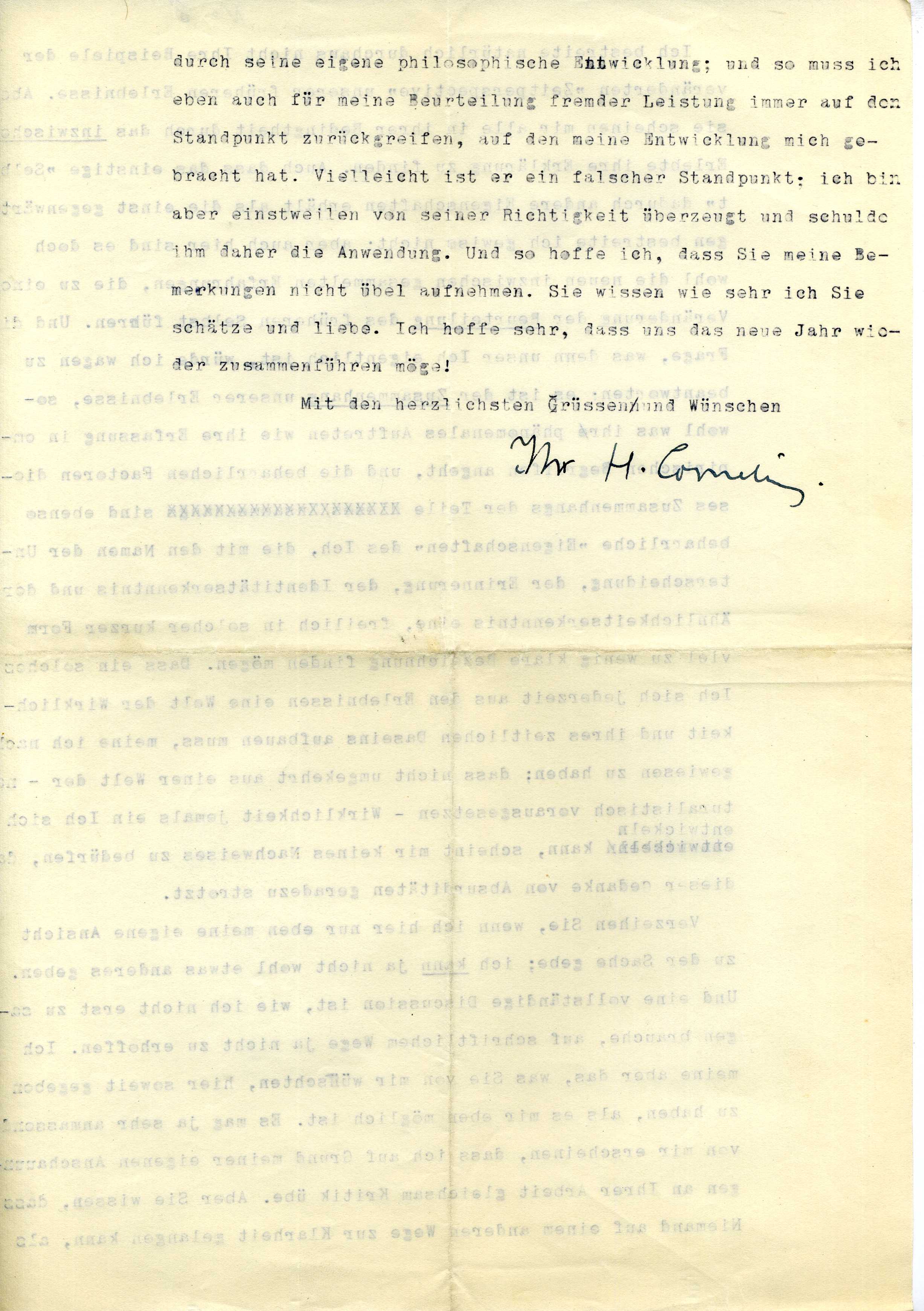 n        This is the first letter I am writing in the new year (the last letter I wrote last year also went to Poland – to Mrs. Witkiewiczowa). Besides wishing you all the best for the new year, the purpose of this letter is to finally and per your request, share my thoughts on your work “Man and Time”.
n        Of course, I would not do my duty if I would simply agree with your idea of the two ways of experiencing our relationship with time without further discussion and supporting your remarks. Instead, please allow me to view these matters from my perspective and determine which findings I slightly disagree with.
n        As far as I am concerned, I would not evaluate the contradiction of reality and mere phenomenon the way you presumably did right from the start. The way I see it, both types of experiences substantially originate from the pre-critically existing, thus naturalistic concepts of the self and time. Although the transcendental analysis of both concepts does not do away with these naturalistic terms, it shows that the phenomenal and the “real”, i.e. the concept formation of the 2nd category derived from the phenomenal, aren’t different, but rather equally important for the organization of our experience. When we examine both, the origin of the term self as well as the concept of time, I see that both positions are essentially equal only in that they no longer represent a contradiction, but rather different views of the same thing. Only one thing changes here: The self, as the transcendental analysis shows, isn’t something ephemeral, but rather the indispensable condition for the meaning of the concept of time, and thus it cannot be destroyed without the simultaneous destruction of time. (I tried to explain this behavior in more detail in my work on the development of the concept of time which I sent to the then committee of the “Scientia” as an entry for the Eugenie-Rignani-Award competition. After sending it to the committee, the paper disappeared, and I never heard back from them.)
n        If you would like me to elaborate, I would say the following:
n        The persistence of the self solely consists on us experiencing each and every moment as parts of the same interconnection to which all recalled experiences belong like our memory in the form of the symbolic function indicates to us. This interconnection is the constant (persistence), regardless of how much our experiences and perhaps even our “character traits” may change.
n        On the other hand, we only know about time on the basis of the symbolic function of our recollection experiences. Not only in the sense that we only know about colors because we can see them with our eyes; but rather because there wouldn’t be the possibility of a sense of the idea that there is such a thing as the course of time, if this symbolic function were nonexistent. (And thus, our entire psychological life would be nonexistent, too.) In this respect, one must only look for the prerequisite for all thinking in a “reality” in the self because it can only be found there. Regardless of how little the self may be constant in other respects, it is more constant in the above respect, and as the prerequisite for all reality more constant than anything present in reality.
n        By no means am I disputing your examples of the changed “time perspective” of our earlier experiences, however, it appears to me that they can all be explained by the conditionality of previous experiences. Moreover, I am not disputing that the former “self” thereby takes on other characteristics than the formerly existent self; however, here too it is the newly acquired experiences that result in a different evaluation of the former self.  In response to the question of what our self actually is, I would say the following: It is the interconnection of our experiences; both with regard to its phenomenal appearance as it concerns the ascertainment in empirical context as well as the persistent factors of this interconnection of the parts that are also persistent “characteristics” of the self which are insufficiently defined (particularly in such brief summary) by the terms “memory, identity knowledge and the knowledge of similarities”. I believe that I have established that such a self actually creates a world of reality and a temporal existence based on experiences – and I believe that there is insufficient evidence for the theory that a self develops based on a world of a presupposed naturalistic reality. In my opinion, this idea is absurd.
n        Please excuse me stating my own opinion regarding this matter; however, I cannot state anything different. As you are aware, a full discussion is simply impossible via mail. However, I believe that I have fulfilled your request to the extent possible. It may seem presumptuous that I am criticizing your work. Nevertheless, you know that it is impossible to attain a state of clarity in any other way than by one’s own philosophical growth and development, and therefore, when reviewing the work of others, I have to apply my perspective which is based on my own development. My perspective may be erroneous, however, at this time, I am convinced that it is correct, and I must therefore apply it. I hope that you are not offended by my comments. After all, you know how much I appreciate and like you. I very much hope that our paths will cross again in the new year!