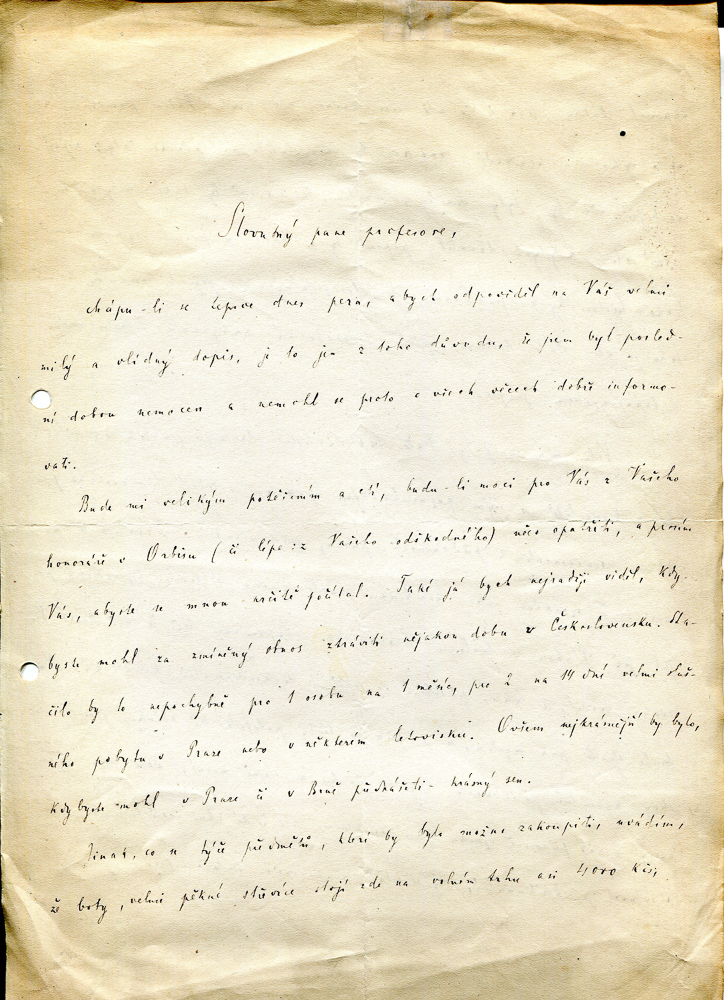 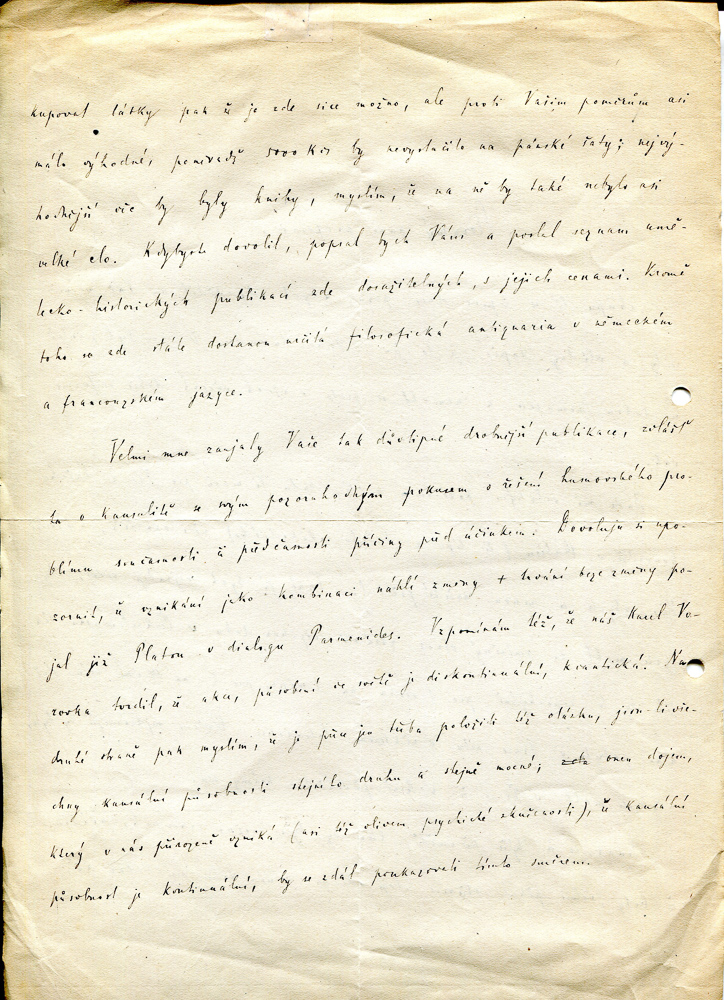 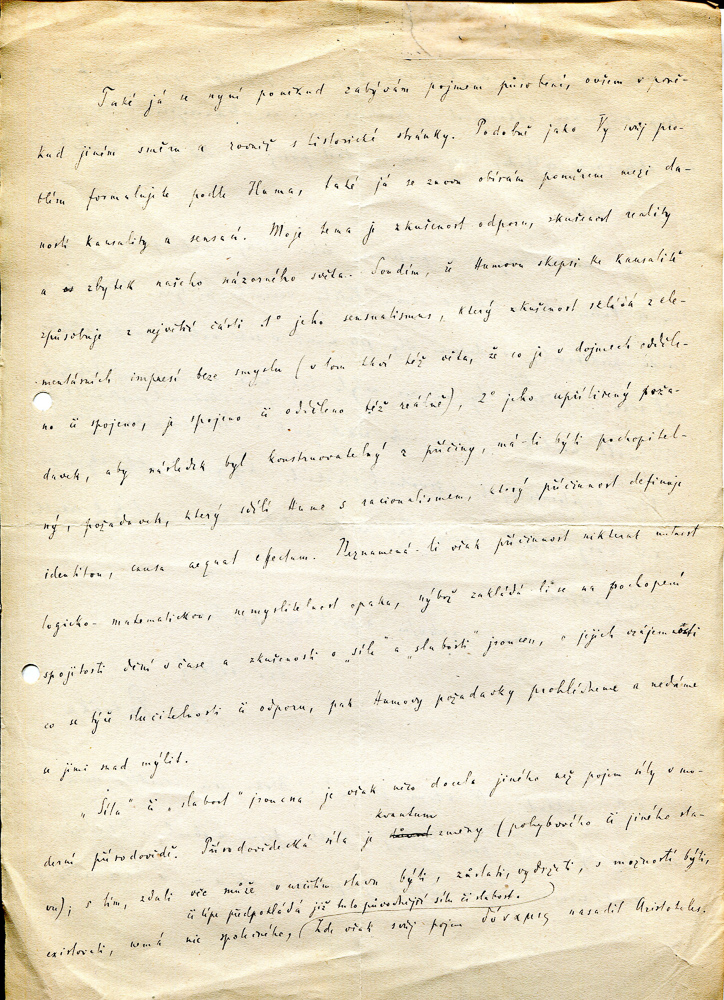 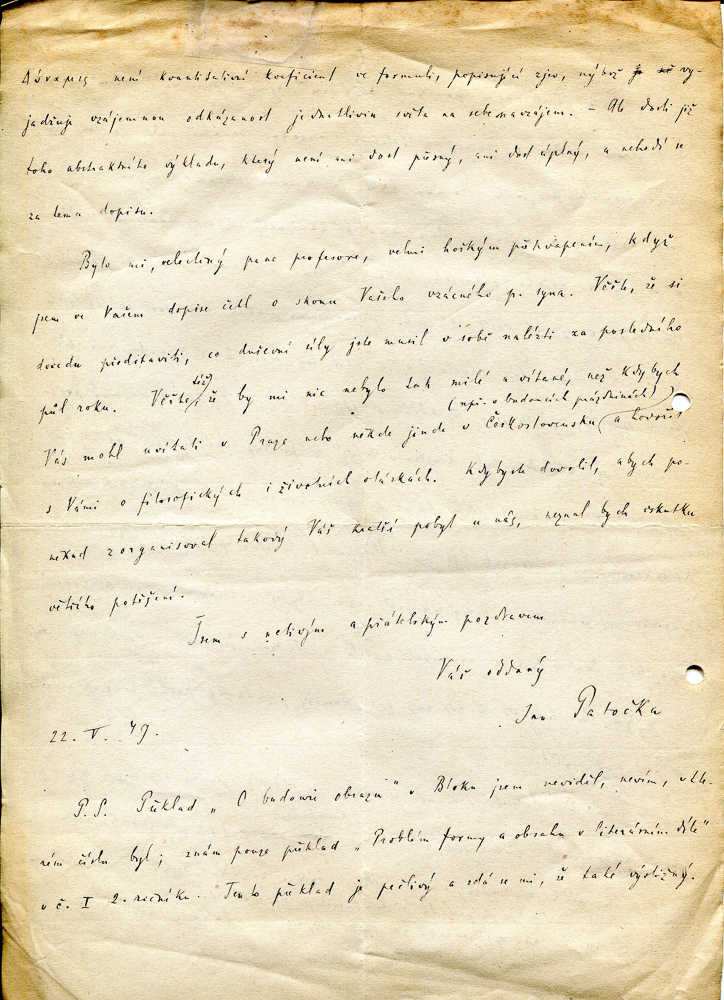 n       I must apologise for only starting to write to you today, in reply to your very kind letter, but I have been ill recently and so was unable to find everything out.
n      It would be a pleasure and an honour for me to be able to obtain something for you from your royalties from Orbis (or should I say from your “compensation”), so please count on me. I would also prefer it if you could spend some time in Czechoslovakia for the amount mentioned. I am sure that it would be enough for 1 person for a month or for 2 people for a fortnight, to have a jolly decent stay in Prague or one of our spa towns or resorts. Having said that, what I would most like would be for you to give some lectures in Prague or Brno – that would be my dream.
n      Otherwise, as regards things you could buy, shoes, wonderful ladies’ shoes, cost about CSK 4,000 on the open market here. You can buy fabrics here, but they are probably better value with you, because CSK 5,000 would not be enough for a suit. The best value thing to buy would be books and I think that you would probably not have to pay high excise duty on them. If you would like, I could compile a list of publications on history of art that are available here, together with their prices, and send it over to you. Also there are still some second-hand philosophy books to be found here in German and French.
n      I was intrigued by your very shrewd insights in your shorter works, especially the publication about causality, with its remarkable attempt to address David Hume’s issue of ‘the present’ or the ‘priority of cause before effect’. I might mention that ‘creation’, as a combination of sudden change and duration without change, was interpreted by Plato in the Parmenides dialogue. I also remember Karel Vozovka claiming that action or causation in the world is something discontinuous and quantic. On the other hand, I think we also need to ask ourselves whether all causation is of the same nature and force; the impression naturally awoken in us (probably through the influence of psychological experience as well) that causation is continuous would seem to point in that direction.
n      I am also currently tackling the concept of causation, but from a rather different direction and also from an historical perspective. In the same way as you formulate your problem according to David Hume, I am devoting myself once again to the relationship between causality and sensation. My focus is the experience of resistance, the experience of reality and the rest of our visual world. In my view, Hume’s scepticism towards causality is primarily attributable to (1.) his sensualism, which builds up experience from meaningless elementary impressions (also forming the basis for the argument that whatever is separated or combined in the imagination is also combined or separated in reality) and (2.) his exaggerated requirement that it must be possible to construct the consequence from the cause, if it is to be understandable, a requirement that Hume shares with rationalism, which defines causality by identity, causa aequat effectum. But if causality does not in any way mean ‘need’ from a logical or mathematical perspective and does not mean that the opposite is unthinkable, but if it is instead based on understanding the continuity of events in time and experience of the ‘strength’ and ‘weakness’ of being, the experience of their mutual connection in terms of compatibility or resistance, then we can see through Hume’s requirements and will not be misled by them.
n      The ‘strength’ or ‘weakness’ of being, however, is completely different to the concept of ‘strength’ in modern science. Strength from a scientific perspective is the quantum of change (in movement or another state); it has nothing to do with whether a thing can be, remain or endure in a certain state, with the possibility of being or existing, or in other words requires this more original strength or weakness. Here, however, Aristotle used his term ‘dunamis’.
n      ‘Dunamis’ is not a quantitative coefficient in a formula, describing a phenomenon, but expresses the mutual dependence of the world’s individual constituent parts. But enough of this abstract interpretation, which is neither sufficiently precise nor sufficiently complete and is not a suitable topic for a letter.
n      It was such a terrible shock to read in your letter about your precious son’s death. I can imagine what huge spiritual strength you must have found within yourself over the past six months. I would also like to say that nothing would make me more delighted than to be able to welcome you to Prague, or somewhere else in Czechoslovakia (for example during the coming holiday season), and to discuss matters of philosophy and life with you. There is nothing that would make me happier than if you would allow me to start organising a short stay for you over here.

P.S. I did not see the translation of O budowie obrazu [On the Structure of Paintings] in Blok [Block] magazine. I don’t know which issue it was in. The only translation I have come across is Problém formy a obsahu v literárním díle[1] in Year 2, Issue I. This translation has been carefully compiled and also seems faithful, in my opinion.

[1] Translator’s note: Czech for ‘Problem of Form and Content in a Literary Work’. This could be a translation of O poznawaniu dzieła literackiego (The Cognition of the Literary Work of Art] or O dziele literackim [On Literary Works]