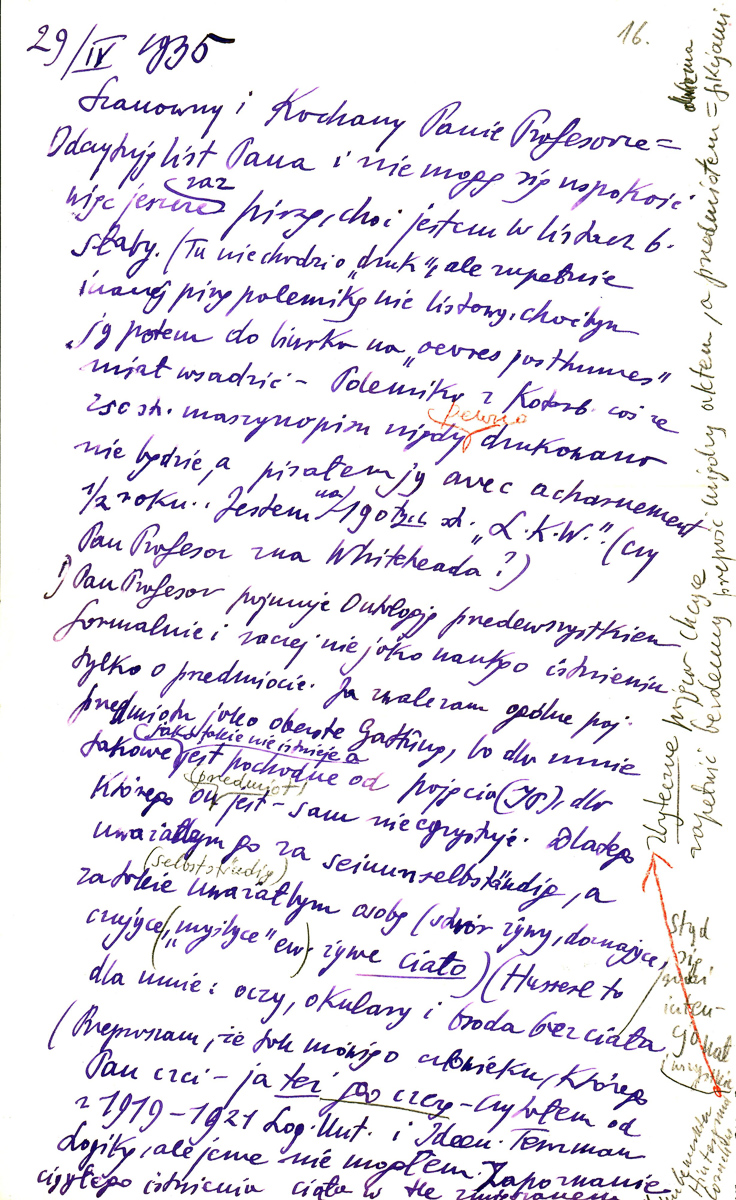 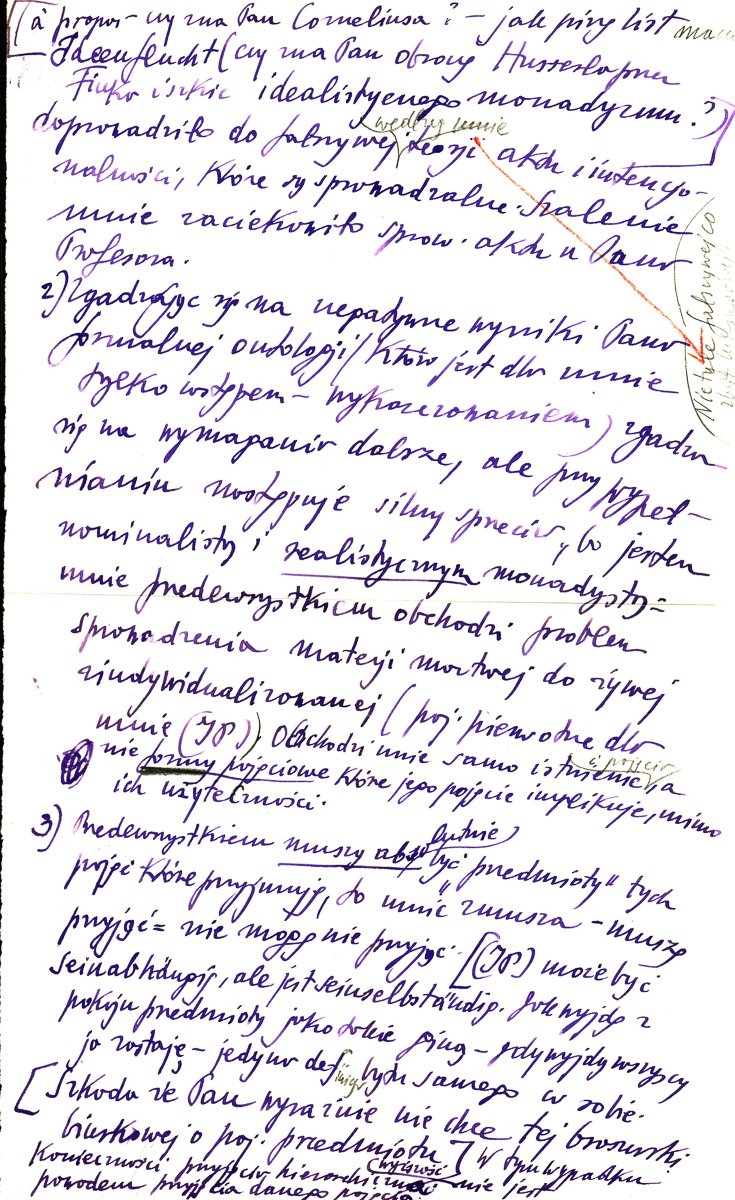 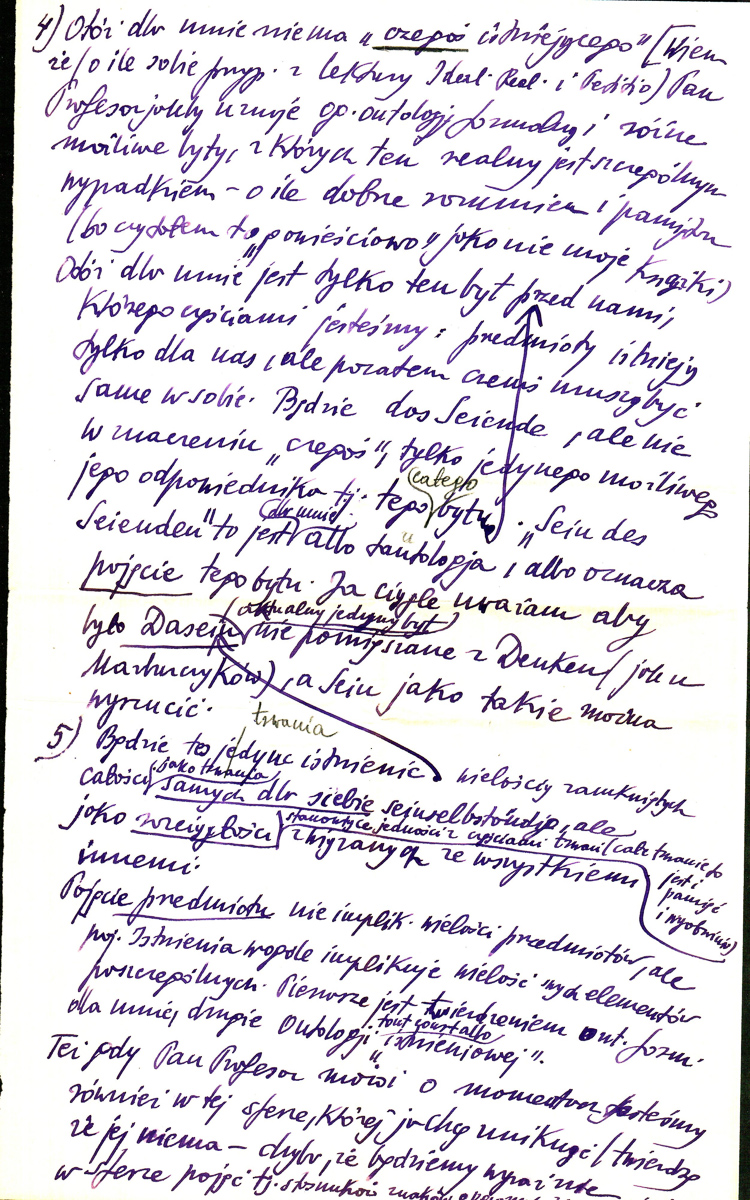 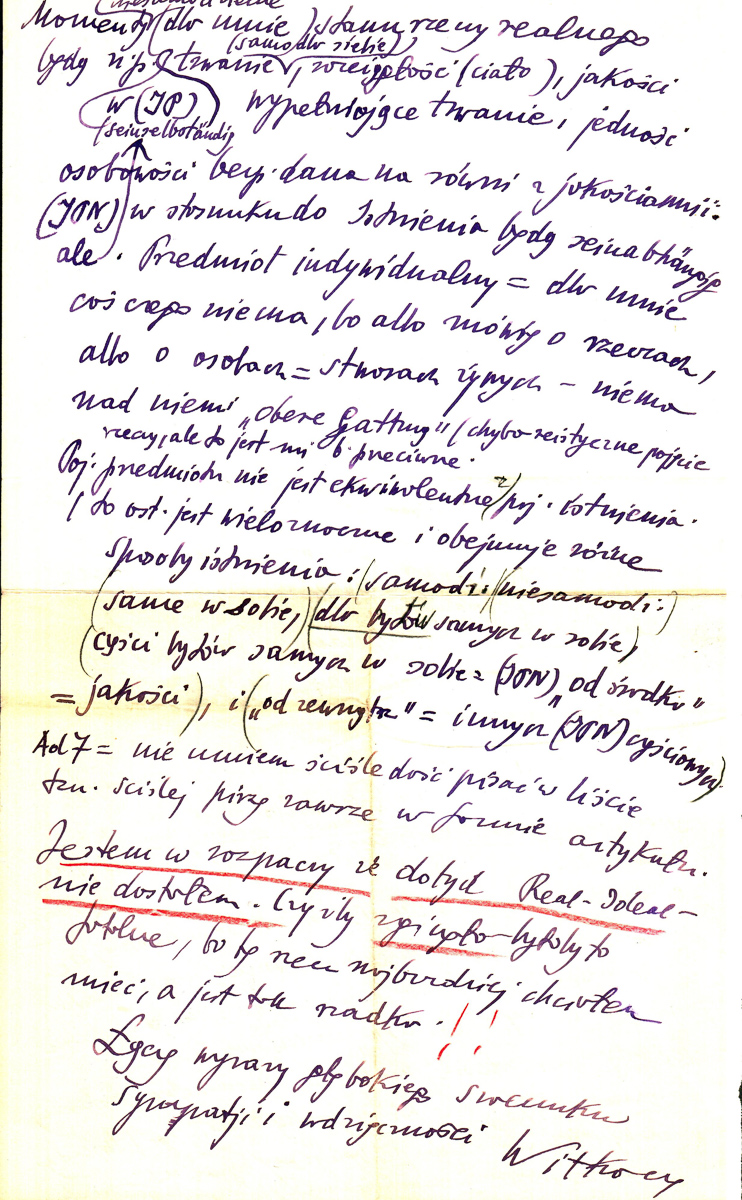 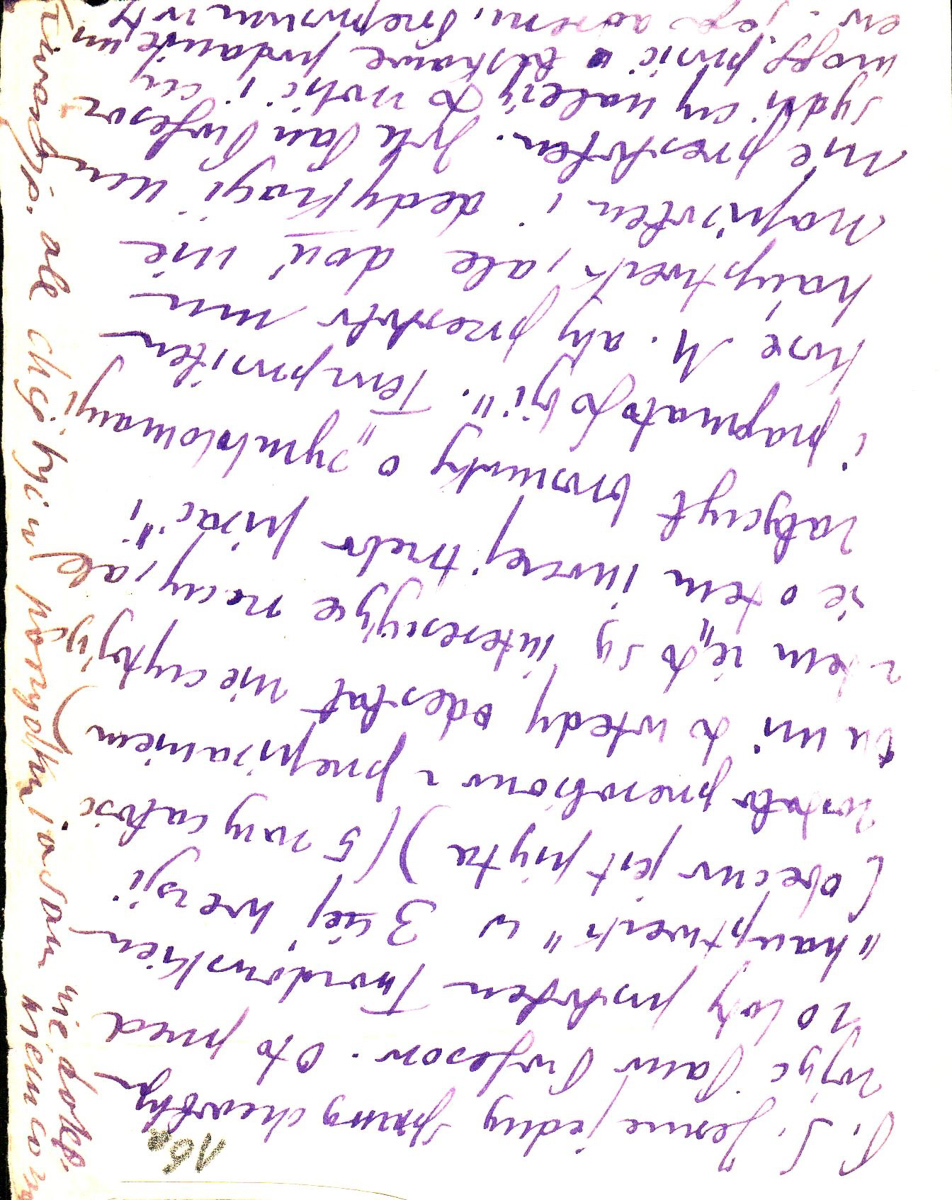 29.IV 1935
Honoured and Dear Professor =
I am reading your letter and I find it hard to calm down, so I am writing again, though I am v[ery] poor at correspondence. (it’s not about “print”, but I [usually] write non-lettter polemics quite differently, even if I’d have to put it aside for “oeuvres posthumes”). – The polemics with Kotarb[iński], about 250 typed p[age]s long, will probably never be published, I wrote it avec acharnement ½ year. I am on the 190th p[age] “L.K.W” (Do you happen to know Whitehead?)
1) You understand ontology above all formally and, rather, not as a study of existence but about the object. I fight the general concept of the object as the oberste Gatung, because for me it does not exist as such, and it is derived from the concept (IE), for which it (the object) is – it does not exist on its own. That’s why I would consider it seinunselbständig, and I would consider a person (live creature, a feeling, “possibly thinking” live body) selbständig. (Husserl means for me: eyes, spectacles and beard without the body). I am sorry to say that about a man you worship – I worship him, too. I read [his] Log. Un. and Ideen between the yrs. 1919-1921. I now have his Logic , but I couldn’t yet [begin]. Presenting the continuous existence of the body in a mixed background (a`propos – do you know Cornelius?) – as I am writing the letter, I’m having Ideenflucht (do you know Fink’s defence of Husserl and [his] sketch of idealistic monadism?) has led to a false – maybe not so much false but too exclusive, in my opinion, theory of act and intentionality, which are reducible. I am greatly interested in how you understand the reducib.[ility] of the act.
2) Accepting the negative results of your formal ontology (which is for me just the beginning – the pruning), I agree to further conditions, but when applying them I object, because I am a nominalist and a realistic monadist – I primarily care about the reduction of dead matter to live and individualised one (which is a primary concept for me) (IE – Individual Existence). I only care about existence and the concept itself, not about conceptual forms which its concept implies, despite their usefulness.
3) Above all, there must absolutely be “objects” of the concepts which I accept, it forces me – I must accept = it’s impossible not to accept [(IE)] may be seinabhängig, but it is seinselbständig. When I leave the room, the objects perish as such – when everyone comes out, I stay – the only definition of being in itself. [It is a pity that you clearly do not want this desk-drawer brochure about the con[cept] of the object]. In this case of necessity of accepting, hierarchical superiority is not a reason for accepting a given concept.
4) Well, for me there is no such thing as “something existing”. [I know that (as far as I recall from reading Ideal. Real and Petitio), you recognize a general formal ontology and various possible entities, of which this real is a special case – as far as I understand and remember correctly (because I read these “as fiction” since these are not my books)]. For me there is only this being in front of us, whose parts we are: objects exist only for us, but besides, they have to be something in themselves. It will be das Seiende, but not in the sense of “something”, but the only possible counterpart of it, i.e. the whole being. “Sein des Seienden” is a tautology for me, or it means the concept of this being. I still think that Dasein (the only actual being) is not mixed up with Denken (as in the Marburgers), and Sein as such can be thrown away.
5) It will be the only existence of a multitude of closed wholes as their duration for themselves seinselbständig but as the extent of being one with parts of the duration (all duration is also the memory and imagination) related to all the others. The notion of an object does not imply the multiplicity of objects, but the conc[ept] of Existence in general implies the multiplicity of its individual elements. The first is the assertion of form[al] ont[ology] for me, the second ontology tout court or the “ontology of existence”. Also when the Professor speaks of moments, we are also in the sphere that I wish to avoid (I claim that it does not exist – unless we are clearly in the sphere of concepts, i.e. relations of signs with certain meanings. Non-self-reliant moments (for me) of the real state of things will be e.g. in (IE) duration (for itself), extension (body), qualities that fill in the duration, unity of personality directly given on a par with qualities. (IEs) in relation to existence will be seinabhängig but seinselbständig. Individual subject = something that doesn’t exist for me, because I either talk about things, or about people = live creatures – there is no “obere Gatung” over them (probably [if you assume] a reistic concept of things, but it is something that I am very much against).
6) The concept of an object is not equivalent to the concept of existence (the latter is ambiguous and encompasses various modes of existence: self-reliant, non-self-reliant), in themselves, for entities in themselves, parts of entities in themselves = (IEs), “from the inside” = quality and “from the outside” = other (partial IEs).
Ad 7 = I cannot write strictly enough in a letter, i.e. I always write more strictly in the form of an article. I am in despair that until now I haven’t received Real. Ideal. If it has got lost, it would be terrible, because this is what I wanted to have the most, and it is so rare!!
I enclose words of deep respect, affection and gratitude

P.S. One more thing I would like to bother you with. 10 years ago, I sent Twardowski my “hauptwerk” in the 3rd version (the fifth is the most current), (the whole has been reworked 5 times, with rewriting). He sent it back to me then without reading, saying that “these are interesting things, but that you have to write about it differently” and attached a brochure on “symbol-mania and pragmatist-phobia”. Now I’ve asked the M[ianowski] Fund to send him the hauptwerk [again], but I haven’t written to him and I haven’t sent him a dedication. What does the Professor think: should it be done and [if so], could I poss[ibly] ask for his address? I apologize for this, but I’d like to be fair, and I do not know ex[actly] what to do.