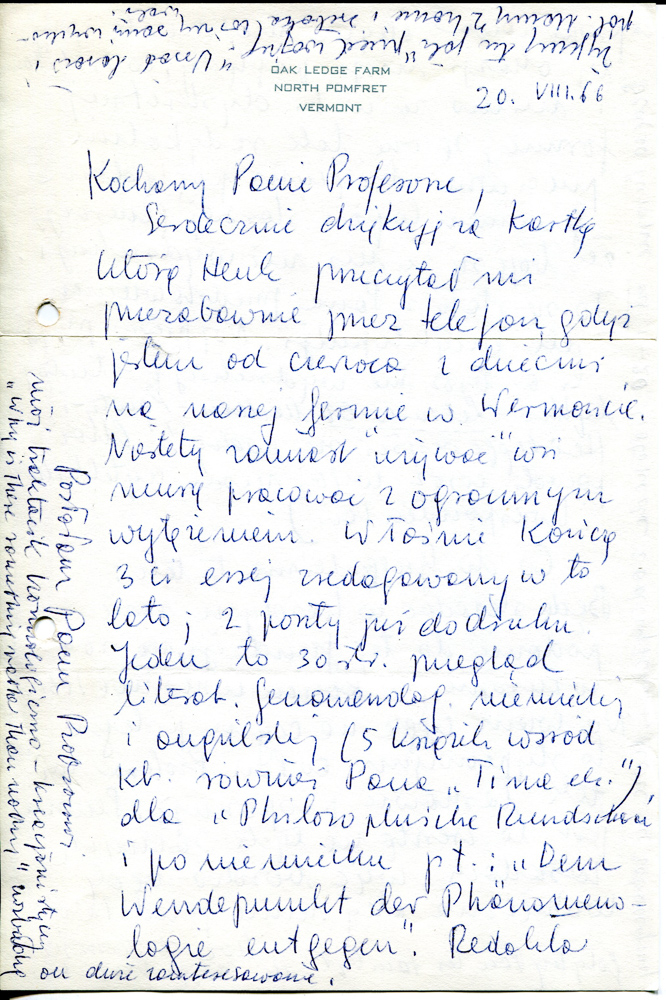 Dear Professor,
c      Thank you very much for the postcard that Henk read to me on the phone in a hilarious way since I and the children have at our farm in Vermont since June. Unfortunately, instead of “basking” in the leisure of the countryside I have to put my efforts into work. I am just finishing the third essay this summer; 2 have already gone on to print. One is a 30-page review of German and English phenomenological literature (5 books, including your “Time XXX.”), for “Philosophische Rundschau” and the other one in German: “Dem Wendepunkt der Phänomenologie entgegen”. The editor suggested that I present my views on this occasion, which I did, and although i did so in a very discreet form, they are so radically opposed to the current views of the phenomenologists of the older generation that I am afraid that they will not release it. [This happened in your case with the encyclopedia. First they accepted it and now they will not print – the only ones allowed to rule the scene here are Lebenswelt Merlau-Ponty and Heideggerists!! Although I have more and more readers and correspondents.]
c      As for Guggenheim, it looks as follows: I will be applying to this foundation, for a year in Europe, at the end of September 1966. I still do not know what this scholarship Professor is so kindly offering me is all about. It is probably based upon the same principle anyway, so I would be very grateful if you could to introduce me if you were there too? Cordial regards for the both both of you as well as your son and daughter-in-law. – Teresa
c      I will be in Europe 1-20 November for lectures. Maybe I will be able to see you. I sent Professor my the cosmologically-creationist treatise “Why is there something rather than nothing” – is has aroused great interest.

c      Life here is like “before the war”. Among forests and fields. We have 2 horses and a foal we have raised ourselves.

Attachment to letter to the Committee of the Library of Classics of Philosophy written 12.08.1952

Letter to the Committee of the Library of Classics of Philosophy written 23.06.1951

Letter to the Committee of the Library of Classics of Philosophy written 29.05.1954