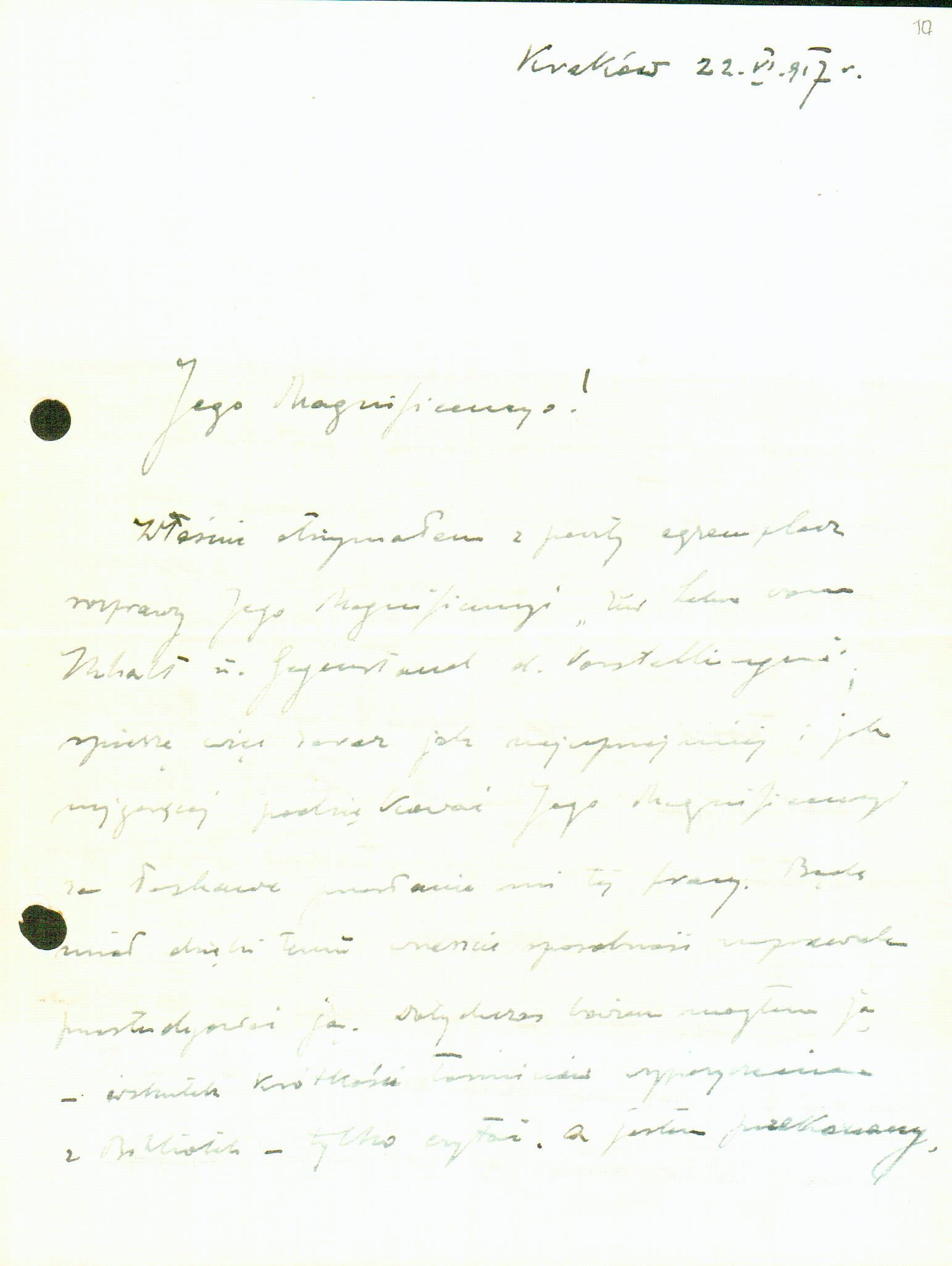 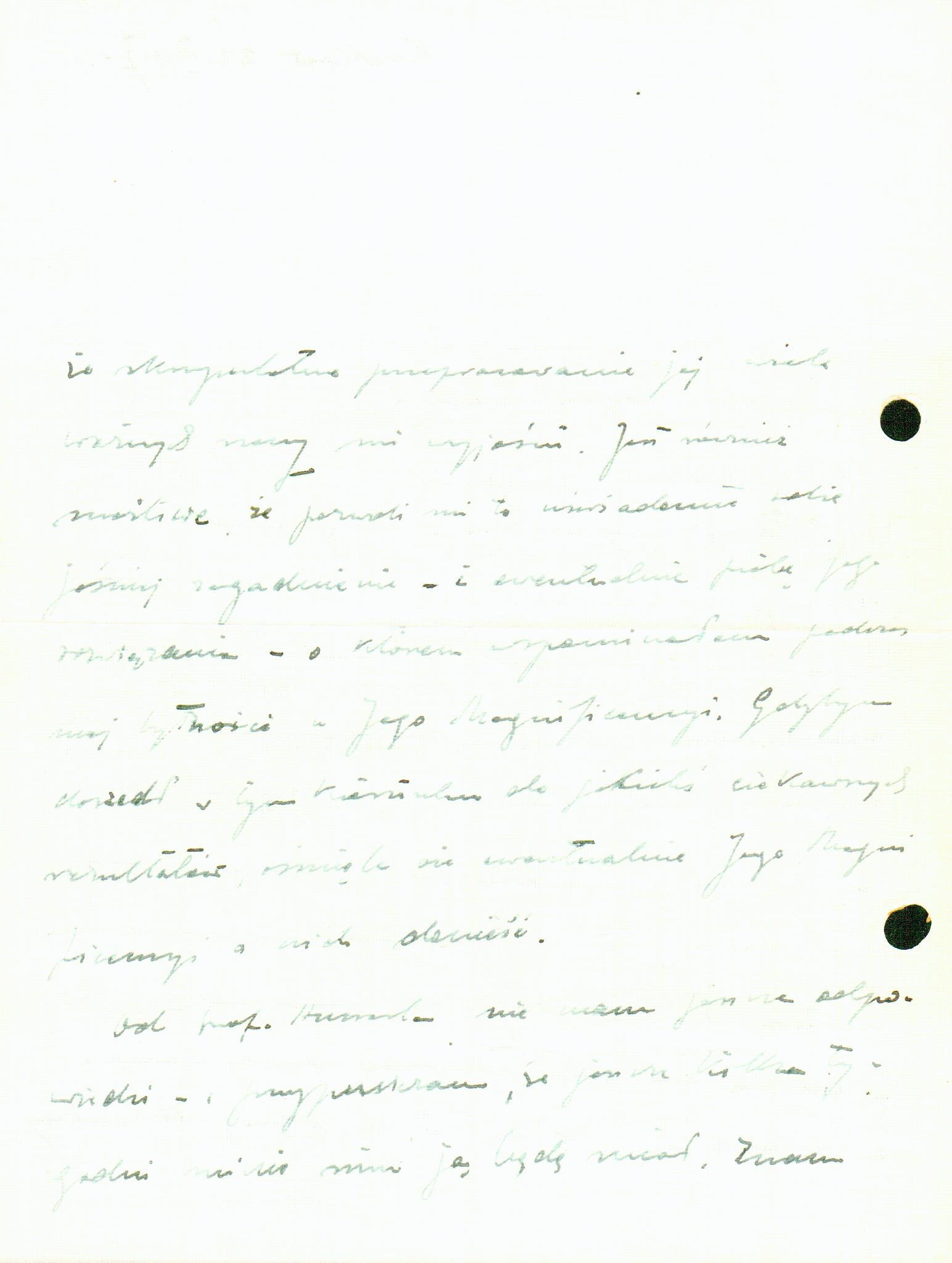 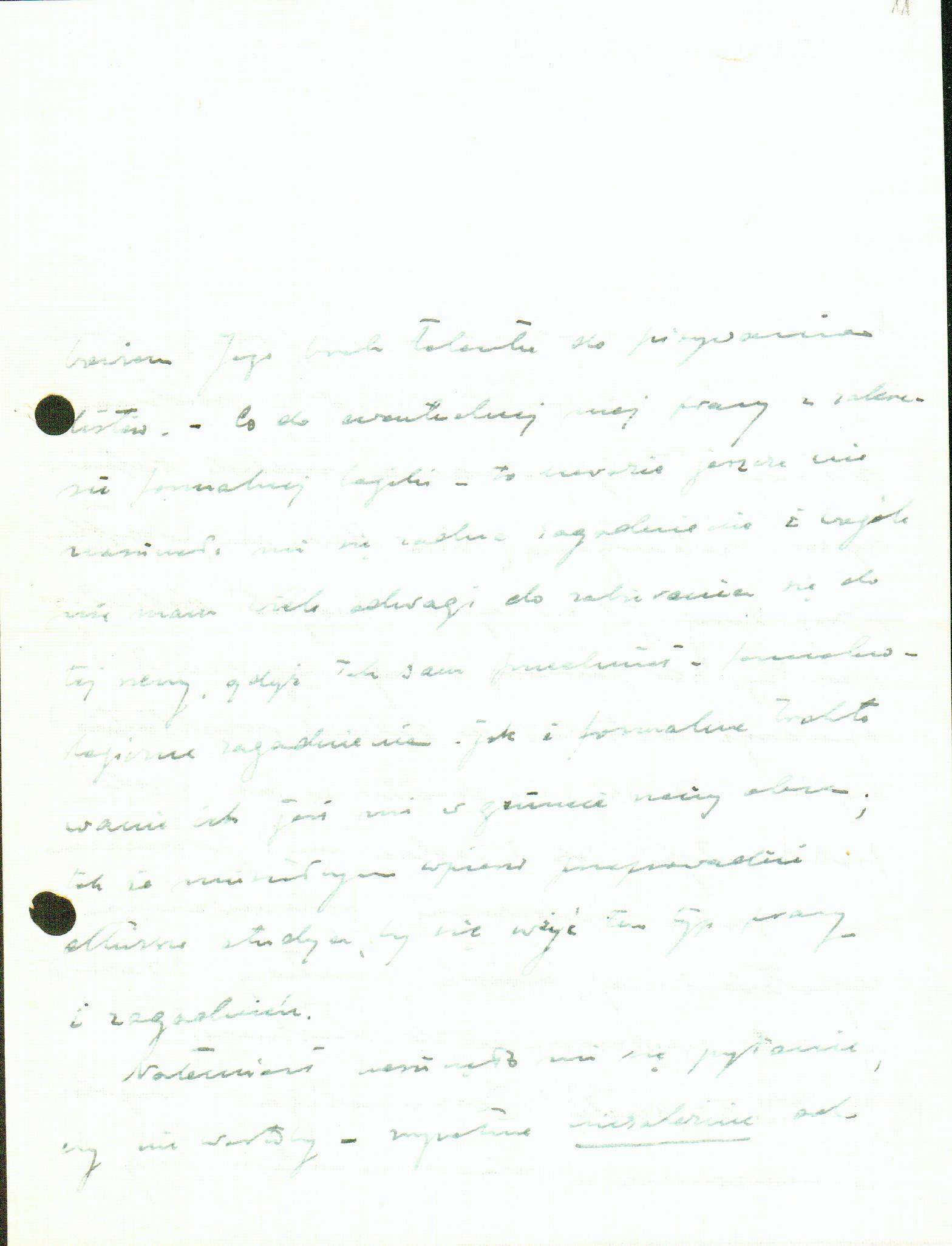 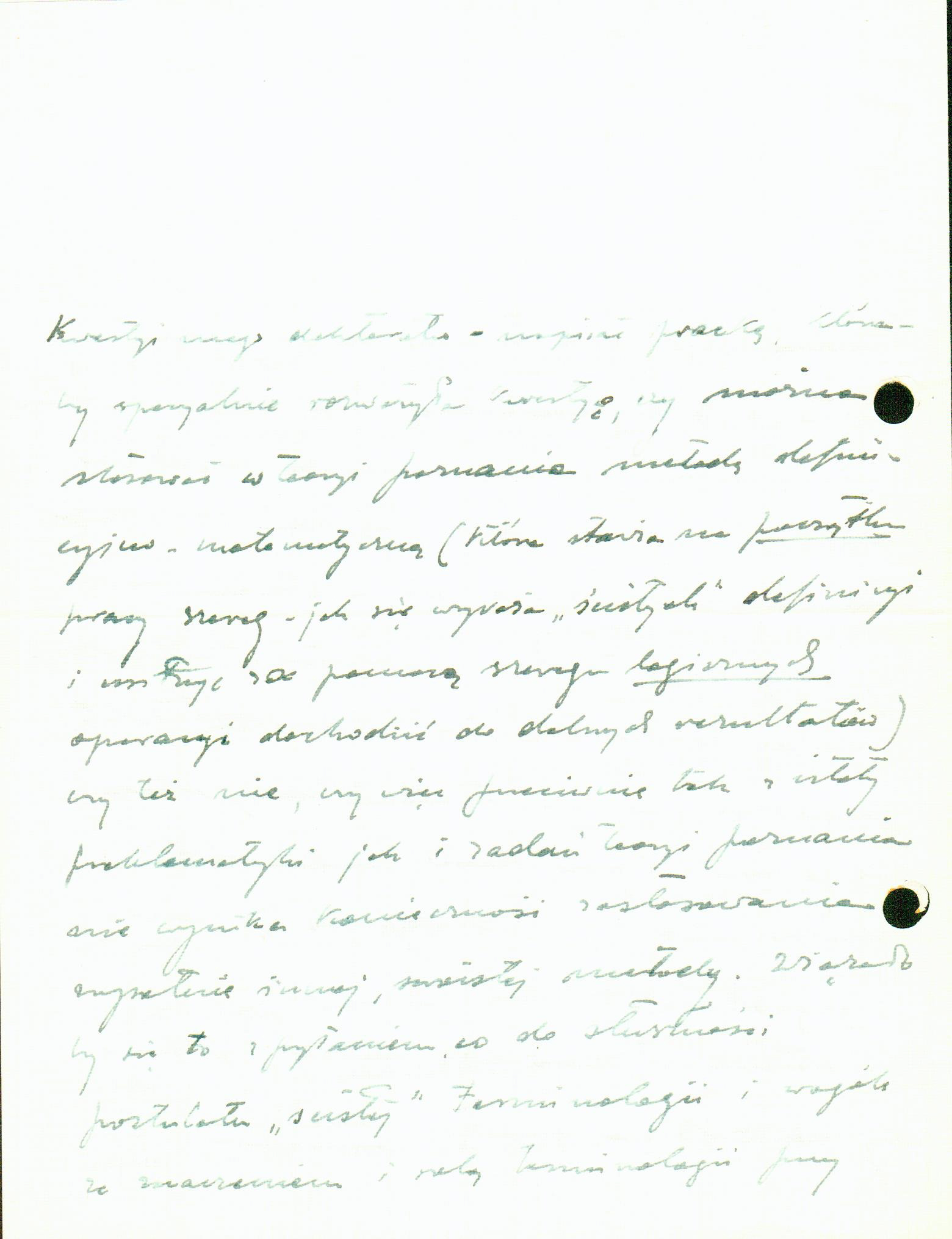 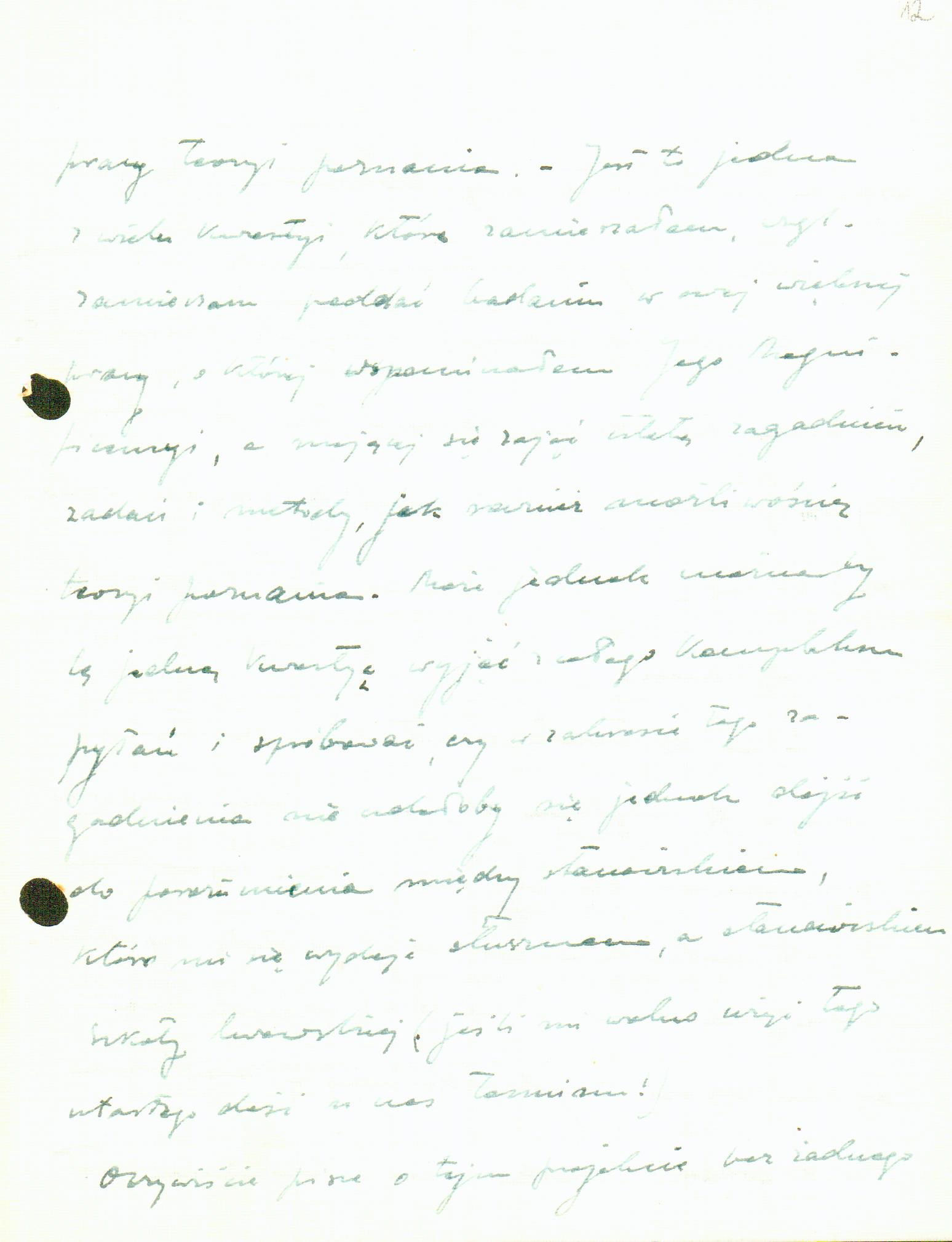 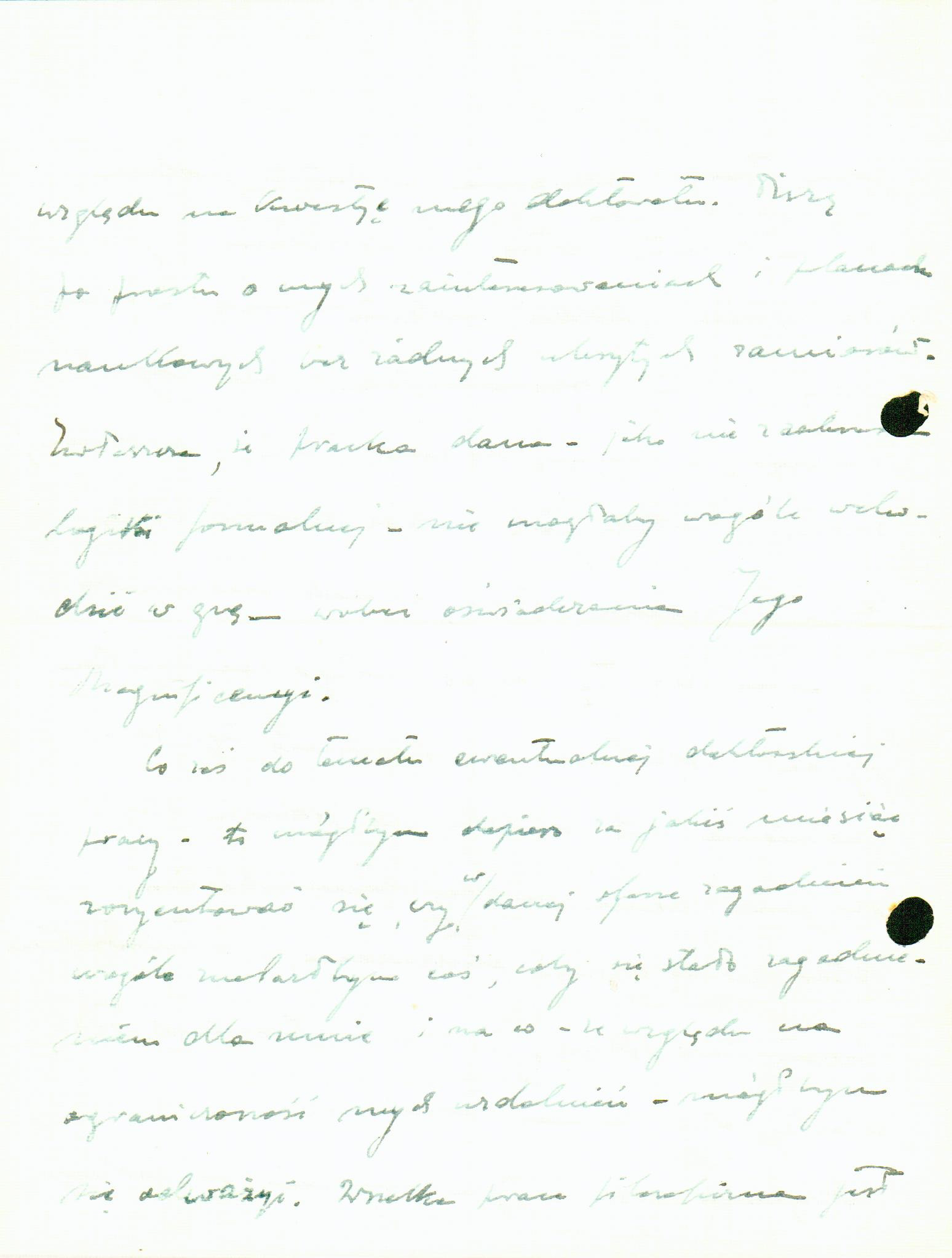 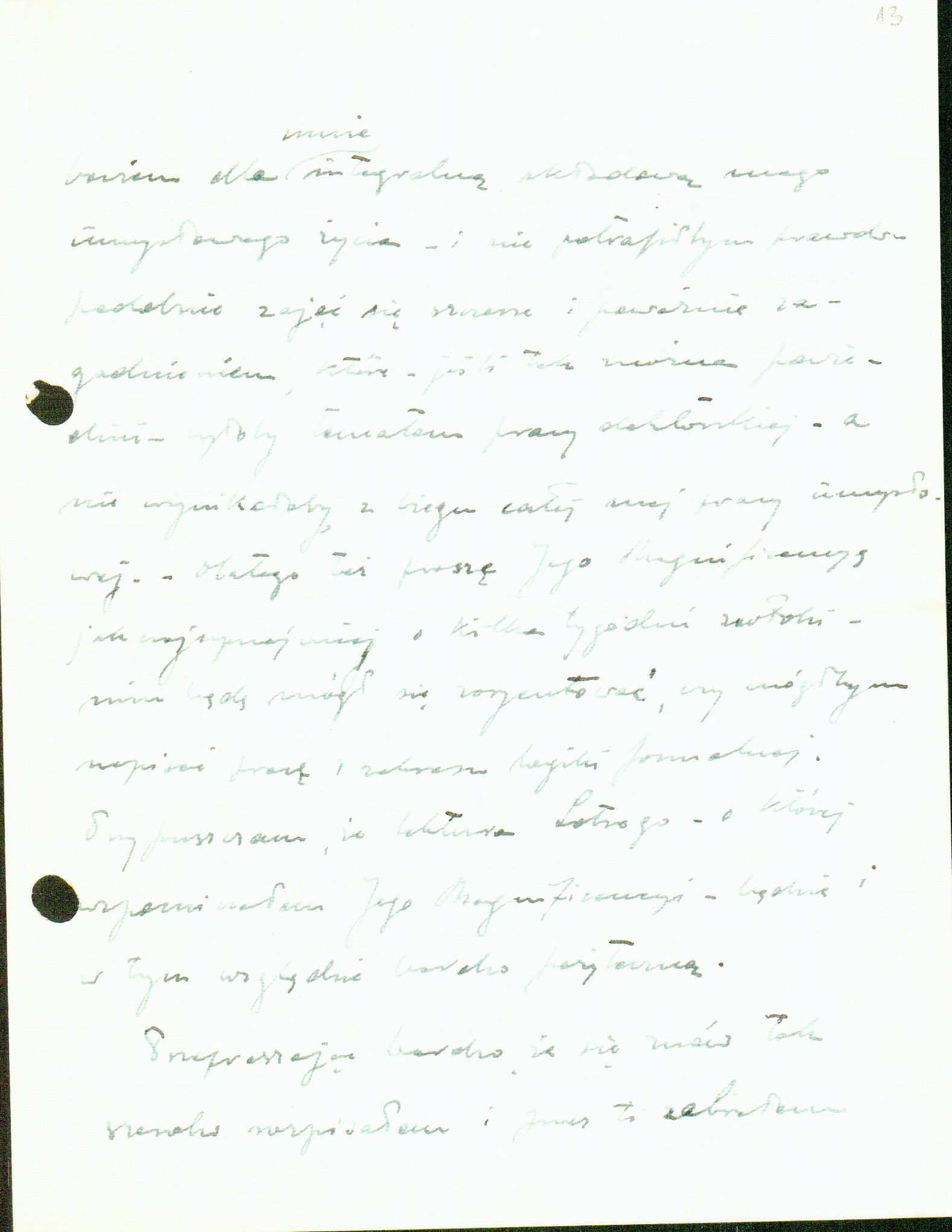 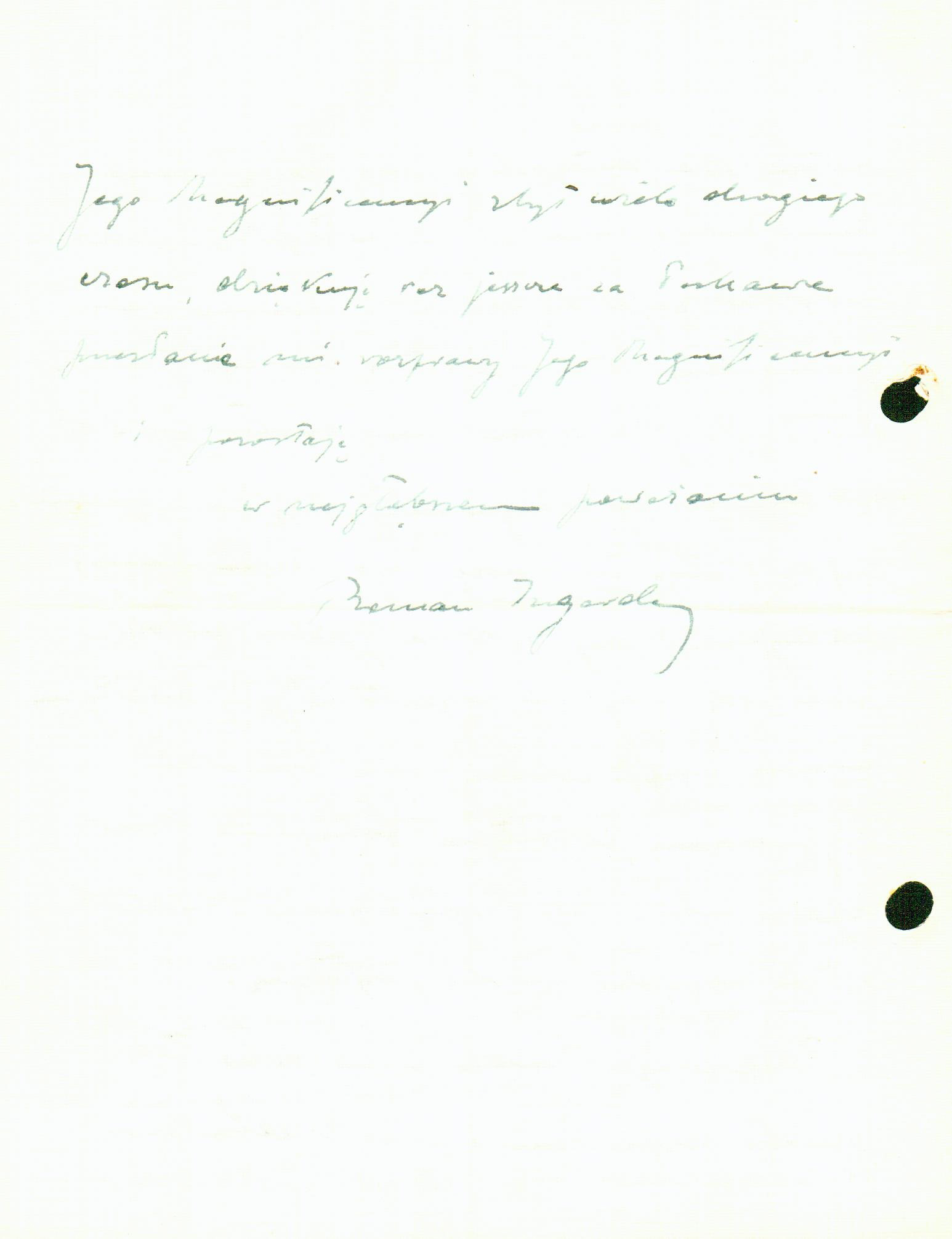 I’ve just received a copy by post of Your Magnificence’s dissertation Zur Lehre vom Inhalt u. Gegenstand d. Vorstellungen[O1]  [On the Content and Object of Presentations]; accordingly, I’m hastening to immediately extend Your Magnificence kindest and warmest thanks for graciously sending me this paper, thanks to which I’ll finally have the opportunity to thoroughly study it, as heretofore, due to the short borrowing periods at libraries, I’ve been able only to read it. I’m convinced, moreover, that scrupulous study will clarify many important things contained therein. It’s also possible that this will enable me to become more conscious of the issue ‒ as well as its possible solution ‒ that I mentioned during my stay with Your Magnificence. If I arrive at some interesting results in this direction, I’ll take the liberty of informing Your Magnificence about them.

I haven’t had an answer yet from Prof. Husserl, and I suppose that several more weeks will pass before I have one. I’m familiar with his lack of talent for writing letters. – As for my potential work in the field of formal logic, as of yet, no issues have occurred to me, and generally I don’t have very much courage when it comes to applying myself to these things, since both the subject itself ‒ formal logical issues ‒ and a formal approach to it are basically foreign to me, to the point that I would have to conduct extensive studies in order to involve myself in work and issues of this type.

However, the question has occurred to me as to whether it wouldn’t be worthwhile ‒ completely independently of the question of my doctorate ‒ to write a short paper that would specifically consider the issue of whether it would be possible to apply the theoretical-mathematical method (which places a series of things ‒ how to express ‘strict’ definitions and to attempt, with the help of a series of logical operations, to arrive at further results ‒ at the beginning of the paper) to the theory of cognition or not, i.e. whether, on the contrary, both the essence of the issues and the tasks of the theory of cognition do not necessarily result from the application of a completely different, specific method. This would be connected with the question of the legitimacy of the postulate of ‘strict’ terminology and generally with the significance and role of terminology in work on the theory of cognition. ‒ This is one of many issues that I intended to, or, rather, intend to investigate in my more extensive paper, which I mentioned to Your Magnificence, aimed at dealing with the essence of issues, tasks, and methods as well as the potential for a theory of cognition. Perhaps, however, it would be possible to extract this one issue from the whole complex of questions and attempt to learn whether, within the scope of this issue, it might not be possible to arrive at an understanding between the position which seems to me to be correct and the position of the Lviv school (if I may use that appellation, which has been run into the ground here!).

Of course, I’m writing about this project without any regard to the question of my doctorate. I’m simply writing about my interests and academic plans, with no hidden intentions, especially since the short paper in question ‒ since it does not fall within the area of formal logic ‒ would not come into play at all, in view of Your Magnificence’s statement.

As for the topic of my eventual doctoral work: only after a few months will I be able to get an idea whether I’ll find anything at all in a given sphere that would constitute an issue for me and which, given my limited capabilities, I might dare to attempt. All philosophical work constitutes, indeed, an integral component of my mental life, and I would probably not be able to sincerely and seriously occupy myself with an issue which ‒ if I may so express it ‒ would serve as the subject of a doctoral dissertation without being the result of the process of my mental work as a whole. ‒ Therefore, I’m most earnestly asking Your Magnificence for a few weeks’ delay before I decide whether I could write a paper in the field of formal logic. I suppose that reading Lotze[O2] , which Your Magnificence mentioned, will be very useful in this regard as well.

With apologies for having again written so generally and thus taking so much of Your Magnificence’s valuable time, I thank you once again for graciously sending Your dissertation, and I remain, with the most profound esteem

Letter to the Polish Academy of Arts and Sciences written 20.02.1948