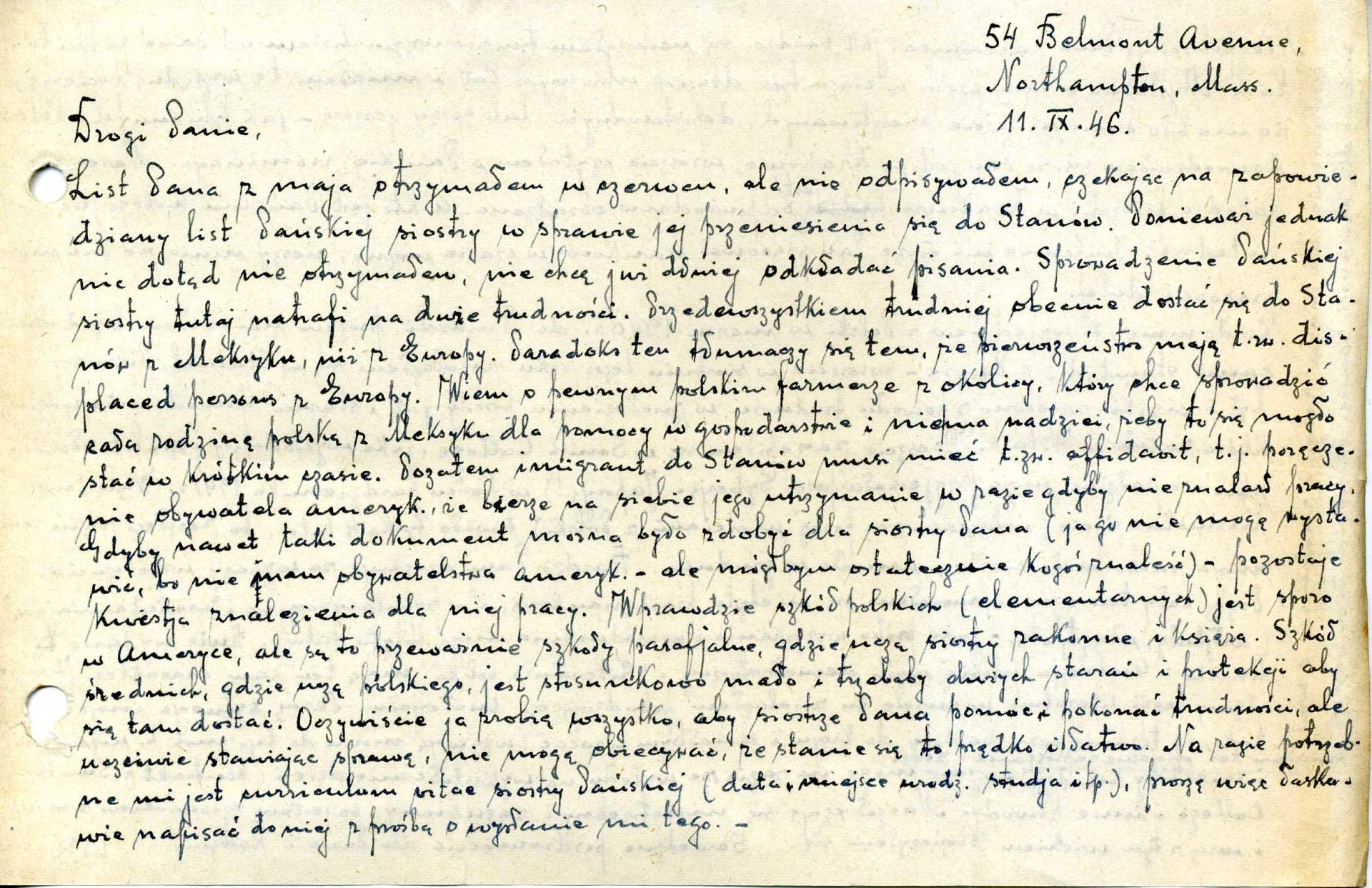 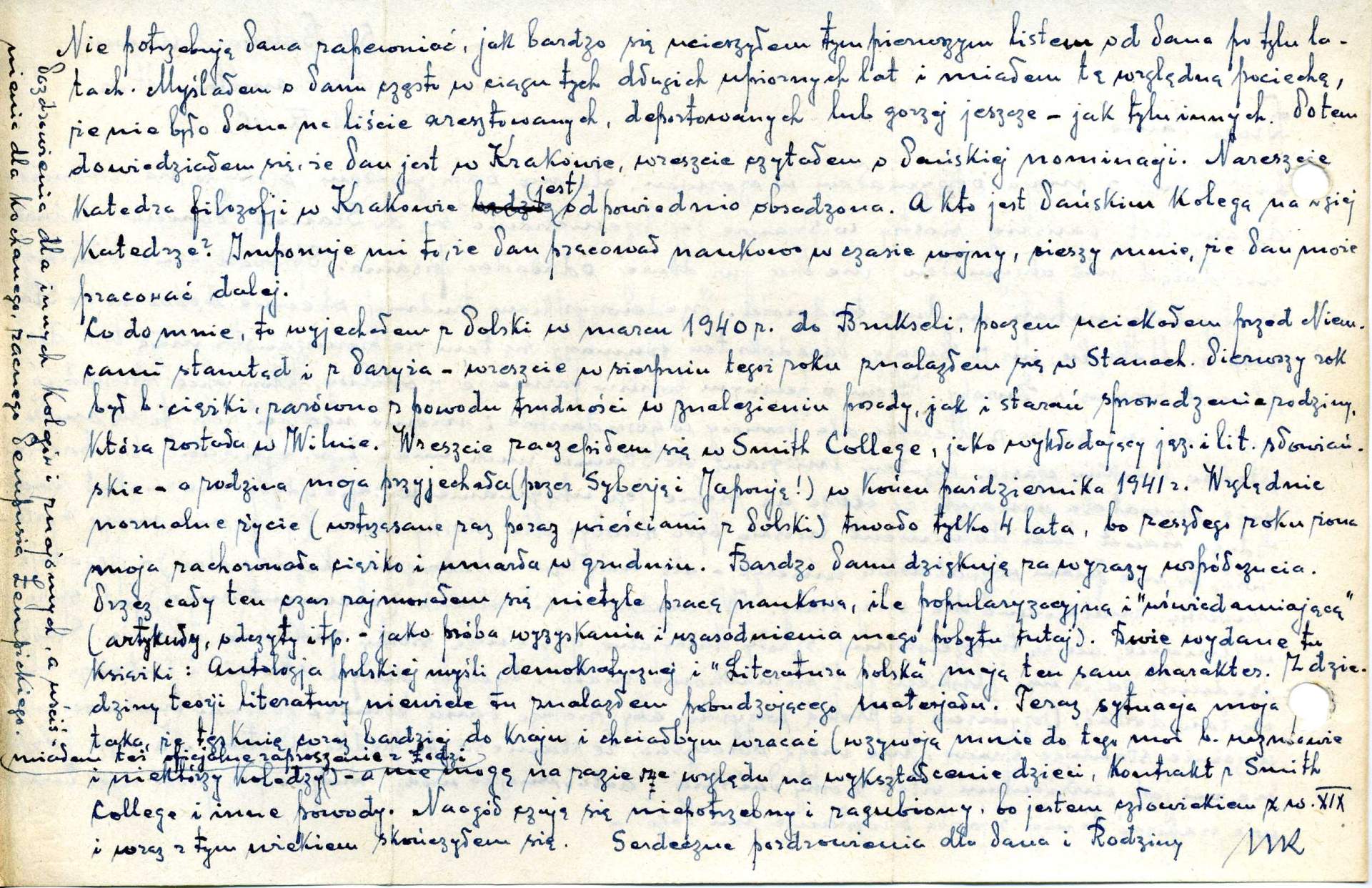 I received your May letter in June, but haven’t written back, as I have been waiting for the announced letter from your sister concerning her move to the States. But since I still haven’t received anything, I don’t want to postpone writing any longer. Your sister’s move here is bound to encounter great difficulties. First of all, it is harder to get into the States from Mexico than from Europe. This paradox is explained by the fact that priority is given to the so-called displaced persons from Europe. I know of a certain Polish farmer in this area who wants to bring his whole Polish family from Mexico to help on the farm, but there is no hope of this happening any time soon. Moreover, an immigrant to the United States must have a so-called affidavit, that is, the guarantee of an Amer. citizen that he will take the immigrant’s maintenance upon himself in case he doesn’t find a job. Even if such a document could be obtained for your sister (I can’t do it because I don’t have Amer. citizenship ‒ but I could find someone eventually) ‒ there is the question of finding a job for her. There are plenty of Polish schools (elementary) in America, but they are mostly parish schools, where the teachers are nuns and priests. Secondary schools where they teach Polish are relatively scarce and it would require a lot of effort and patronage to get into one. Of course I’ll do anything to help your sister and overcome these difficulties, but looking at the matter honestly, I can’t promise that it will happen quickly or easily. For now I need your sister’s CV (date and place of birth, studies, etc.), so please write to her with a request to send me this. ‒

I don’t need to convince you how pleased I was with your first letter, after so many years. I have thought of you often during those long ghastly years and had the relative consolation that you were not on the list of those arrested, deported, or even worse ‒ like so many others. Then I learned you were in Cracow, and finally read about your nomination. At last the Chair of Philosophy in Cracow is suitably occupied. And who is your colleague in the […] chair? I’m impressed that you were able to perform academic work during the war and I’m glad that you can continue to work.

As for me, I left Poland in March 1940 for Brussels, after which I fled from the Germans there and in Paris – finally in August of that year I found myself in the States. The first year was very hard, both because of difficulties in finding a job, and my efforts to bring over my family, who had remained in Vilnius. Finally, I caught on at Smith College, as a lecturer in Slavic lang. and lit. – and my family made it here (by way of Siberia and Japan!) at the end of October 1941. Our relatively normal life (shaken up again and again by the news from Poland) lasted only 4 years, because last year my wife became seriously ill and died in December. Thank you very much for your expressions of sympathy. Through this whole time I was occupied not so much with academic work as with popularisation and ‘raising awareness’ (articles, readings, etc. – as an attempt to make the most of and justify my stay here). The two books published here, An Anthology of Polish Democratic Thought and Polish Literature, are more or less of this same kind. In the field of literary theory, I haven’t found much stimulating material here. Now my situation is such that I miss my country more and more and would like to return (urged by my former students and some colleagues, I also had an official invitation from Łódź – however, I can’t for the time being because of my children’s education, contract with Smith College, and other reasons. In general I feel unnecessary and lost, because I’m a man of the nineteenth century, and when that century ended, so did I.

Cordial greetings to you and your family

Greetings to other colleagues and friends, and hugs for the beloved and worthy Pempuś Lempicki.

Letter to the Committee of the Library of Classics of Philosophy written 27.04.1954

Letter to the Committee of the Library of Classics of Philosophy written 04.07.1951