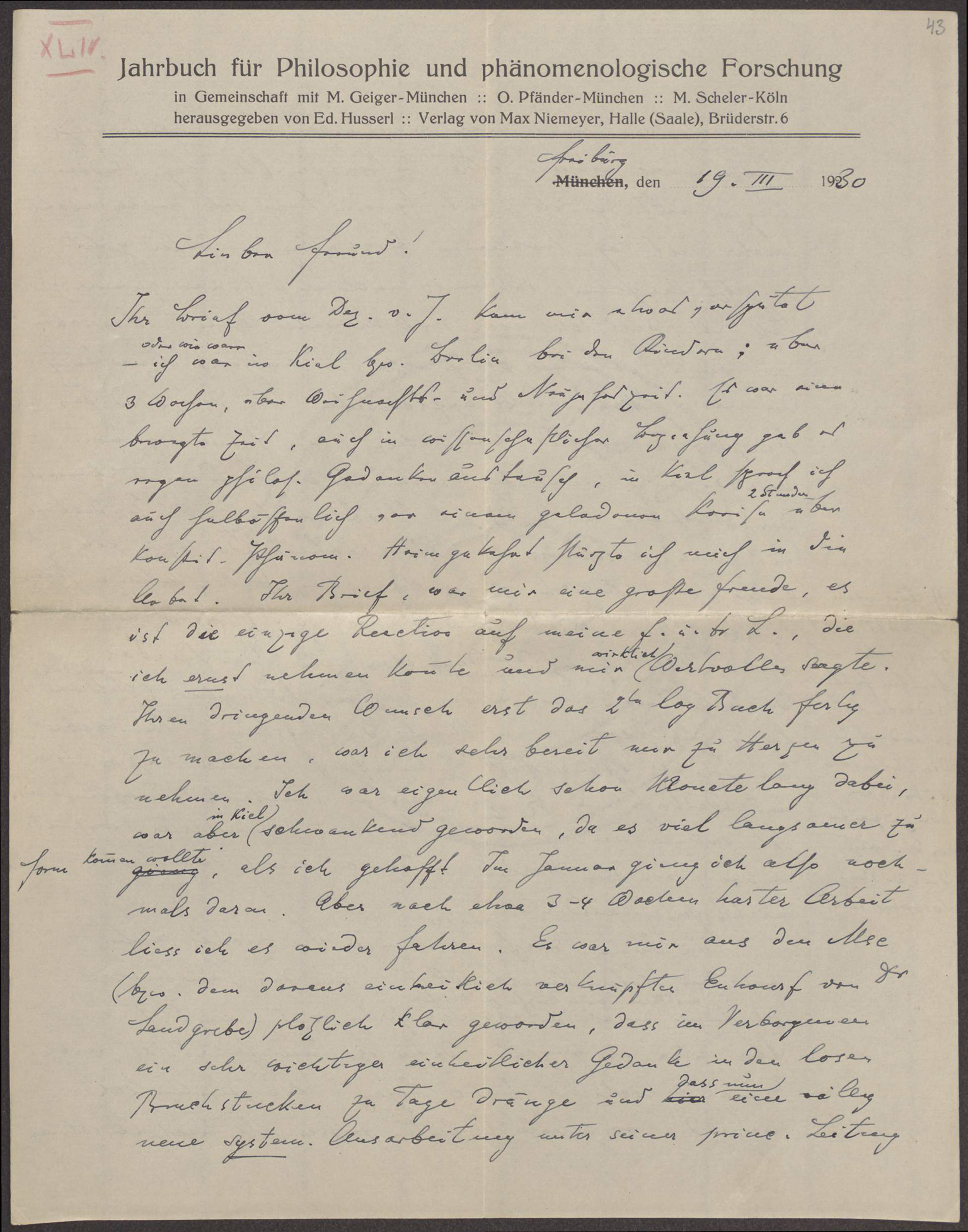 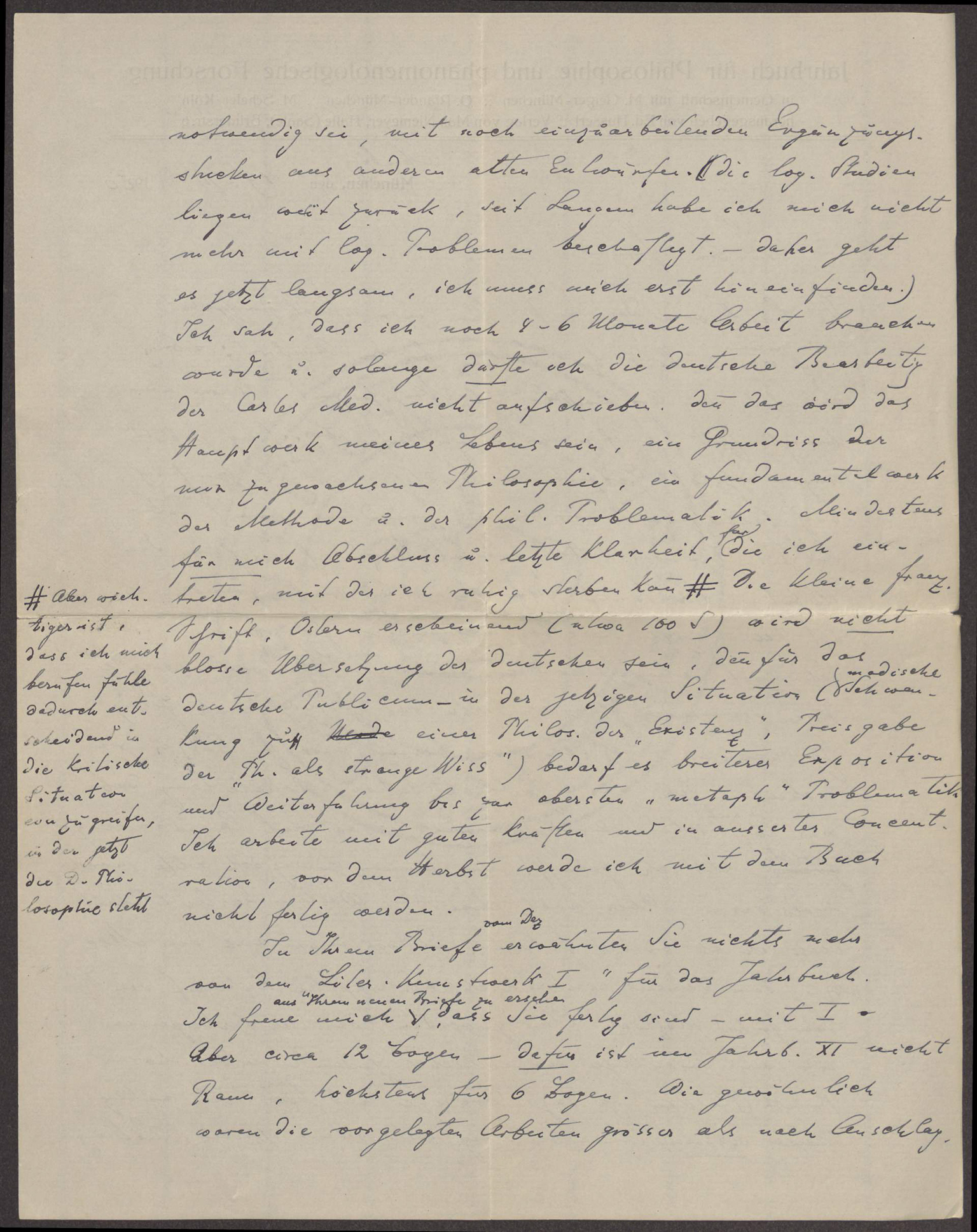 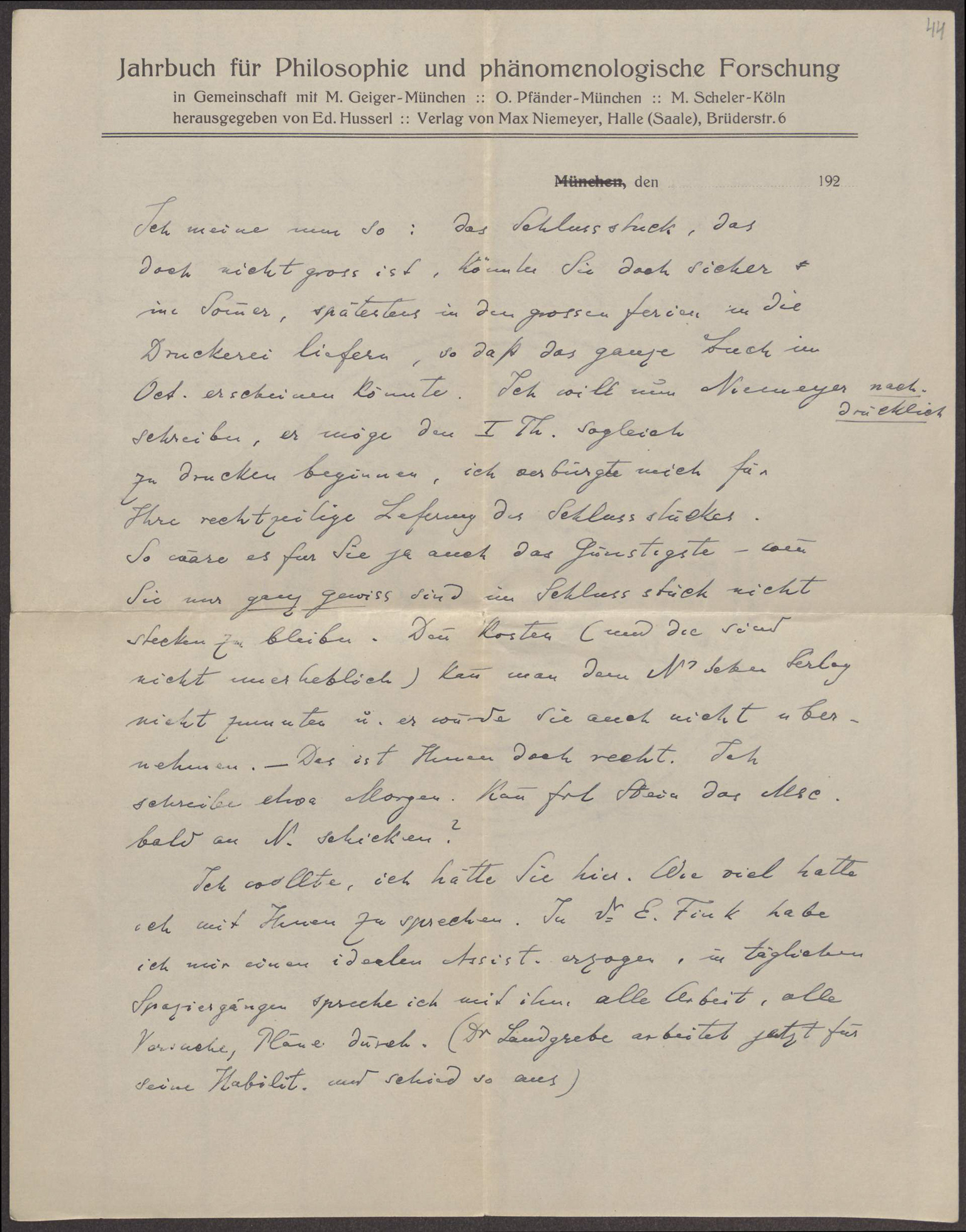 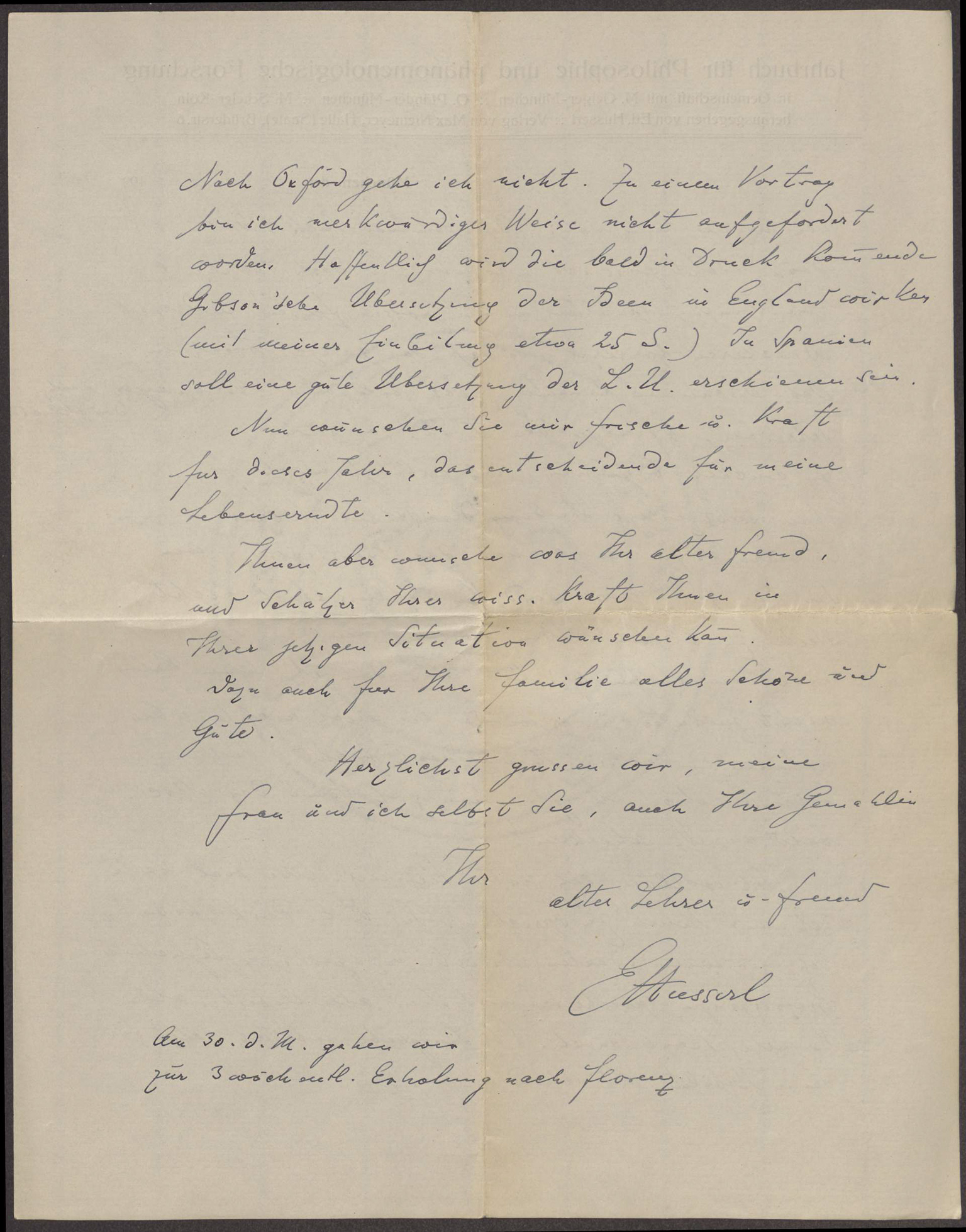 I received your letter from December a little late – I was (or we were) in Kiel and Berlin to visit our children over a period of three weeks for Christmas and New Year. It was an eventful time, even on a scientific level, since there was even a lively exchange of philosophical ideas. In Kiel, I also gave a semi-public speech lasting two hours on constit[utive] phenom[enology] in front of a small circle of selected guests.  Back at home, I jumped right back into my work. Your letter brought great joy to me, as it was the only reaction to my F[ormal] and Tr[anscendental] L[ogic] which I could take seriously, and which provided valuable feedback to me.46 I was open to take to heart your urgent request to complete the second book on L[ogic]. Actually, I had been working on it for months, but I began wavering while I was in Kiel, because it took shape much slower than I had hoped. Therefore, I went back to it in January. But after about 3-4 weeks of hard work, I let it go again. Based on the manuscript (or the associated concept of Dr. Landgrebe), it suddenly became clear to me that a very important, unified thought was being revealed in the loose fragments. Hence, a completely new systematic draft under his general leadership was needed with additional supplements from older works that are to be incorporated. (The Log[ical] Investigations are far behind me and I have not been preoccupied with problems of log[ic] for a long time –  therefore, things are moving along very slowly; I have to gradually get back into it). I realized that it would still take four to six months of work, and I could not afford to postpone working on the German version of the Cartes[ian] Med[itations].47 After all, this shall be the major work of my life; an outline of my understanding of philosophy, a fundamental work of methodology and philosophical problems. For me, at least, a conclusion and final clarity, for which I can stand, with which I can die quietly. (But more importantly, I feel called to intervene decisively in the critical situation of modern G[erman] philosophy.) The short French book that is scheduled to be published around Easter (about 100 pages) will not be a mere translation of the German book, because the German audience in its present situation (a fashionable pivot to a philosophy of “existence”, abandonment of “ph[ilosophy] as a strict sc[ience]”) requires wider exposure and a continuation to the topmost problems of metaph[ysics]. I am working effectively and with the utmost concentration, but I will not be able to complete the book before autumn.

In your letter of December, you did not mention the “Liter[ary] Work of Art I” for the Yearbook. I am pleased to read in your latest letter that you are done – with part I. However, you mentioned 12 pages, and there is not enough room in the Yearbook XI. I have room for six pages at the most. As usual, the submitted works were larger than requested. Here is my suggestion: You could send the final piece, which is not that large, to the printer this summer (during summer break at the latest), so that the whole book could be published in October. I will write to Niemeyer asking him to immediately begin printing the first part, and I will vouch for the timely delivery of the final part. Well, this solution would also be best for you, provided that you do not get stuck while working on the final piece. It would not be right to expect N[iemeyer] to cover the costs (which are not insignificant by the way). Anyway, he would not agree to pay for them either. – That’s fine with you, isn’t it? I will write the letter tomorrow. Can Miss Stein send the manuscript to N[iemeyer ] soon?

I wish you were here with me. There is so much I would like to discuss with you. I have trained Doctor E. Fink as an ideal assistant; during our daily walks, we discuss my work, investigations, and plans. (Dr. Landgrebe is now working on his habilitation and had to leave.) I will not be traveling to Oxford. Strangely, I have not been asked to give a lecture. Hopefully, Gibson’s translation of Ideas, which is about to be printed, will soon have an effect in England (including an introduction written by me, about 25 pages). I heard that a good translation of L[ogical] I[nvestigations] has been published in Spain.

Wish me vigor and strength for this year, which is critical for my life’s work.

[I] wish you whatever your old friend and admirer of your scientific force can wish you in your present situation. In addition, I wish your family all the best.

Best regards from my wife and I to you and your wife.

Your old teacher and friend,

We will be traveling to Florence for three weeks of vacation on the 30th of this month.