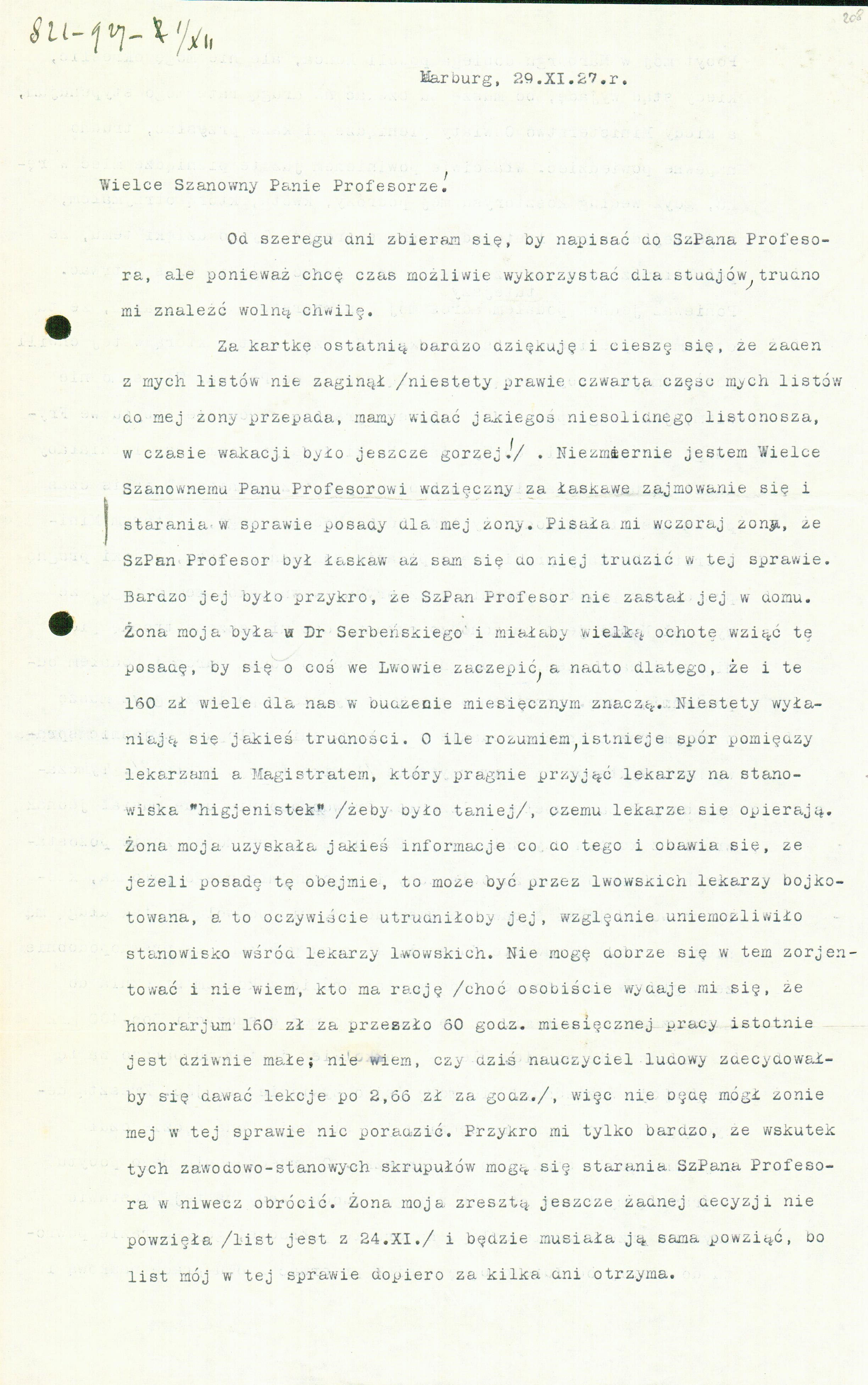 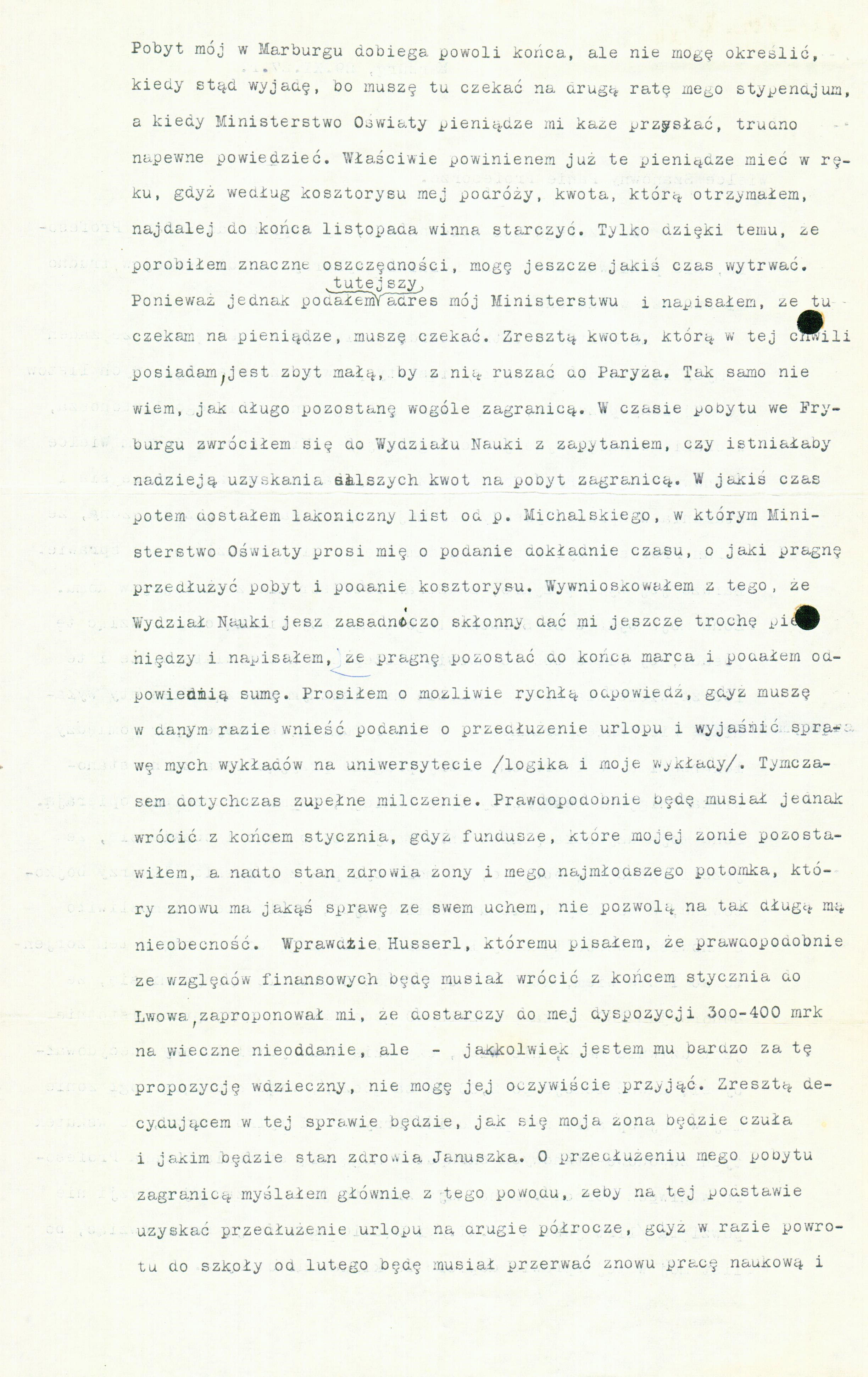 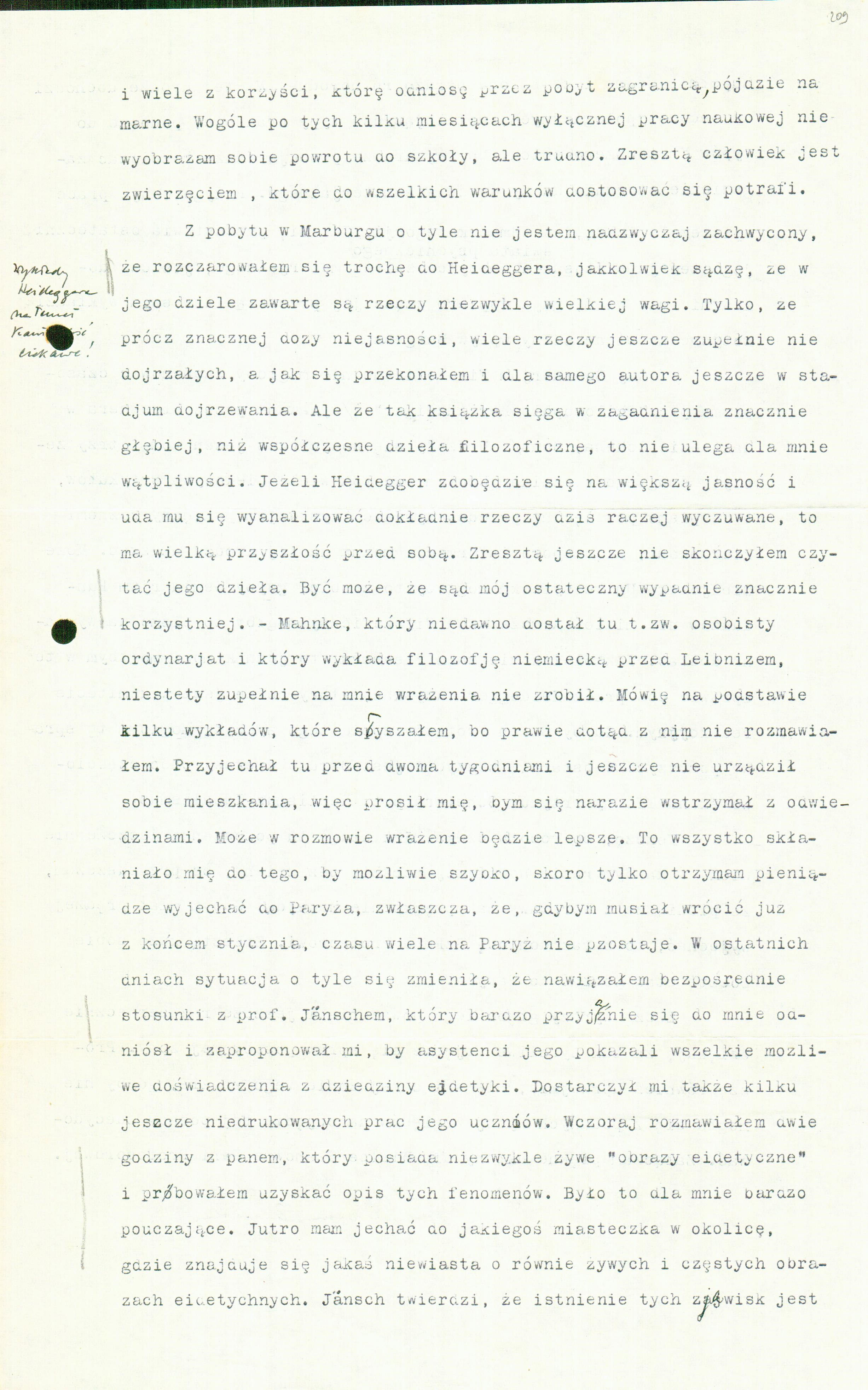 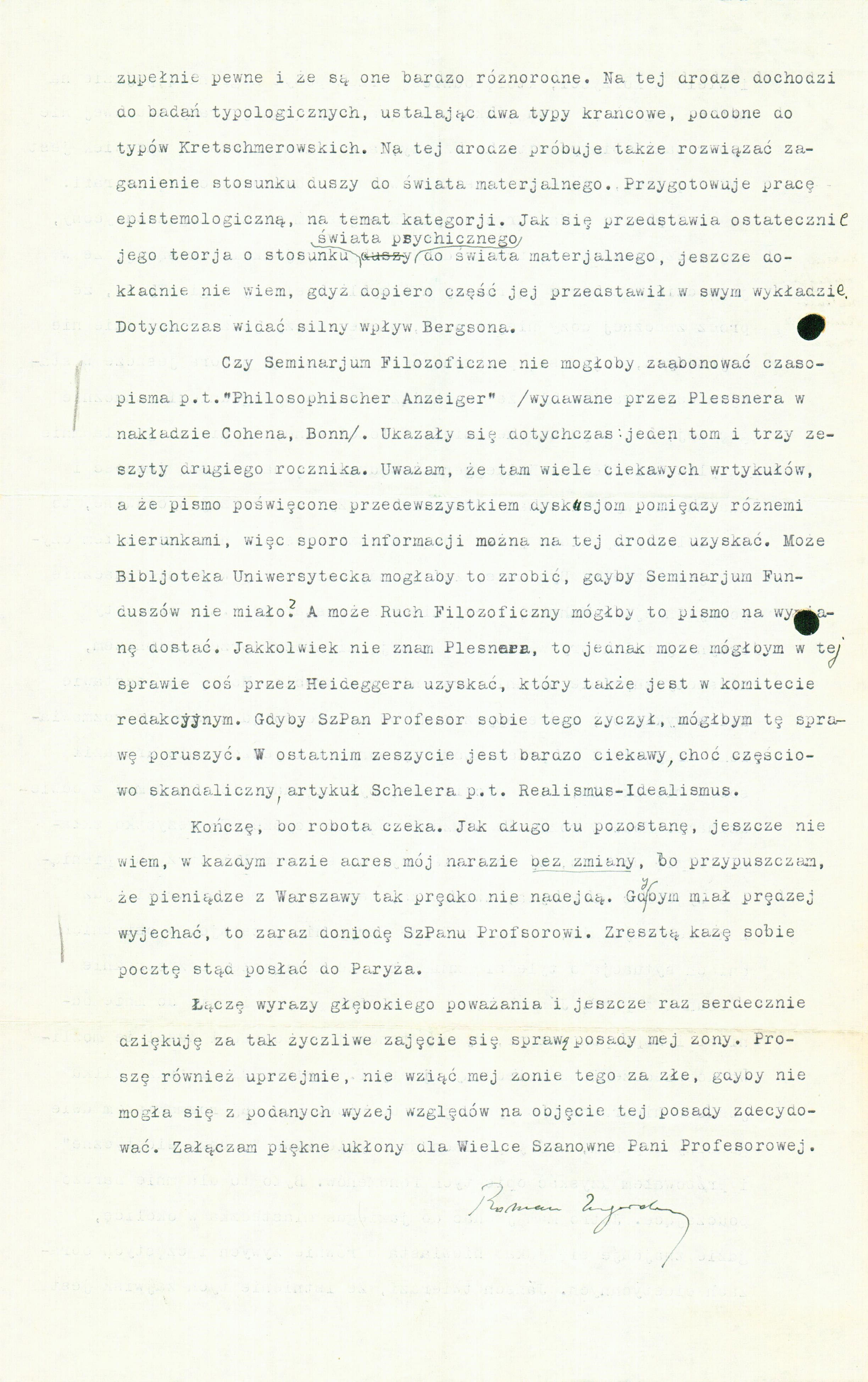 I’ve been intending to write you for several days, but because I want to make as much use of my time as possible for studies, I find it difficult to find a free moment.

Thank you very much for your latest card, and I’m glad that none of my letters miscarried (unfortunately, almost one-fourth of my letters to my wife did; it looks as if we have an unreliable postman ‒ during the summer holidays it was even worse!) I’m extremely grateful to you for your gracious concern and efforts in the matter of the position for my wife, who wrote to me yesterday that you’d been so gracious as to go to see her yourself regarding this matter; she was very sorry that you hadn’t found her at home. She was at Dr Serbeński[O1] ’s, and would very much like to take this position, so as to catch on to something in Lviv, and moreover because these 160 zlotys would also mean a lot to our monthly budget. Unfortunately, some difficulties are emerging. As far as I understand, there’s a dispute between the doctors and the municipality, which wants to hire doctors for the position of ‘hygienist’ (to make it cheaper), which doctors are resisting. My wife has obtained some information about this and is afraid that if she obtained this position, it might be subject to a boycott by Lviv doctors, and that would obviously make it difficult, or impossible, to obtain a position with them. I can’t really understand what it’s all about and I don’t know who’s right (although personally it seems to me that a fee of 160 zlotys for over 60 hours of work per month is very little; I don’t know whether these days any teacher would agree to give classes at 2.66 zlotys per hour), so I won’t be able to advise my wife in this matter. I’m only sorry that, as a result of these professional-state scruples, your efforts may come to nothing. My wife hasn’t made a decision yet (the letter is dated 24/11); she’ll have to make it herself, because she won’t get my letter concerning this matter for a few days.

My stay in Marburg is slowly coming to an end, but I can’t say when I’m going to leave, because I have to wait here for the second instalment of my stipend, and it’s hard to say when the Ministry of Education will order the money to be sent to me. Actually, I should already have this money in hand, since according to the cost estimate for my trip, the amount I received was supposed to be sufficient until the end of November at the latest. It’s only thanks to the fact that I’ve made significant savings that I’m able to hold out for some time yet. However, because I gave my address here to the Ministry and wrote that I’d be waiting for the money here, I have to wait. Anyway, what I’ve got at the moment isn’t enough for me to head for Paris. By the same token, I don’t know how long I’ll stay abroad overall. During my stay in Freiburg, I turned to the Faculty of Science, asking if there was any hope of obtaining further funds for my stay abroad. Some time later I received a laconic letter from Mr Michalski, in which the Ministry of Education asked me to state exactly how long I would like to extend my stay and to provide a cost estimate. I concluded from this that the Faculty of Science were[O2]  basically inclined to give me a bit more money, and I wrote that I wished to stay until the end of March and cited an appropriate sum. I asked for the earliest possible answer, because in this case I’d have to apply for an extension of my leave and clarify the matter of my lectures at the university (logic and my lectures). Meanwhile, complete silence so far. Probably, though, I’ll have to come back at the end of January, because the funds I left my wife, and, moreover, the health of my wife and youngest child, who’s having some kind of issue with his ear again, prevents me from being absent for so long. Admittedly Husserl, to whom I wrote that, for financial reasons, I’d probably have to return to Lviv at the end of January, offered to place 300‒400 marks at my disposition as a permanent loan, but, while I’m grateful to him for this proposal, of course I can’t accept it. Anyway, the deciding factor in this issue is going to be how my wife feels and Januszek’s state of health. I’d been thinking about extending my stay abroad, chiefly, on this basis, in order to obtain an extension of my leave to include the second semester, because if I return to school in February I’ll have to interrupt my original philosophical work again and [O3] many of the benefits from my stay abroad will go to waste. In general, after these few months of exclusively philosophical work I can’t imagine going back to school, but … too bad. Anyway, man is an animal capable of adapting to all conditions.

I’m not especially delighted with my stay in Marburg, in the sense that I’ve been a bit disappointed with Heidegger, even though I think that his work includes things of unusually great importance. It’s only that, apart from a considerable dose of vagueness, many things are still completely unripe, and (I’ve become convinced), like the author himself, still in the maturing stage. But I have no doubt that the book delves significantly deeper into issues than contemporary philosophical works. If Heidegger achieves greater clarity and manages to precisely analyse the things that he only senses today, he’ll have a great future ahead of him. Anyway, I haven’t finished reading his work yet. It’s possible that my final judgment will be much more favourable. ‒ Mahnke, who recently obtained a so-called ‘personal ordinariate[O4] ’ here and who lectures on German philosophy before Leibniz, has unfortunately made absolutely no impression on me. I say this on the basis of several lectures I’ve heard, as I’ve hardly spoken to him as yet. He came here two weeks ago and hasn’t arranged a flat for himself yet, so he’s asked me to refrain from visiting him for the time being. Maybe my impression from a conversation will be better. All of this has inclined me to go to Paris, as soon as possible, just as soon as I get the money, especially since, if I have to return at the end of January, there won’t be much time left for Paris. In the past few days, the situation has changed to the point that I’ve established a direct relationship with Prof. Jänsch[O5] , who’s been very friendly to me and who offered me a demonstration by his assistants of all possible experiences in the field of eidetics. He provided me, moreover, with some of his students’ unpublished papers. Yesterday, I spent two hours talking to a gentleman who experiences extremely vivid ‘eidetic images’, and I attempted to obtain a description of these phenomena. This was very instructive for me. Tomorrow I’m supposed to go to a small town in the vicinity where there’s a woman who experiences equally vivid and frequent eidetic images. Jänsch claims that the existence of these phenomena is absolutely certain and that they are extremely diverse. This has led to typological research which has established two extreme types, similar to Kretschmer’s[O6]  types. Along the same lines, he’s also attempting to solve the riddle of the relationship of the soul to the material world, and preparing an epistemological paper on the subject of category. I don’t exactly know yet how his theory about the relationship of the mental to the material world will ultimately appear, since he presented only part of it in his lecture. So far, the strong influence of Bergson has been visible.

Wouldn’t it be possible for the Philosophical Seminarium to subscribe to a journal entitled Philosophischer anzeiger [Philosophical gazette] (published by Plessner[O7]  through Cohen [O8] in Bonn)? So far, one volume and three issues of the second yearbook have come out. I think there are many interesting articles in it, and that the journal is devoted to, first of all, discussions between various trends; therefore, a great deal of information can be obtained this way. Maybe the University Library could do it, if the Seminarium doesn’t have the funds. Or maybe Philosophical Movement could receive this journal through an exchange. I don’t know Plessner, but maybe I could glean something in this regard from Heidegger, who’s also on the editorial board. If you like, I can proceed with this matter. In the last issue, there’s a very interesting if somewhat scandalous article by Scheler entitled ‘Realismus-Idealismus’ [Realism-Idealism].

I’ll end here, because work awaits. I still don’t know how long I’m going to stay here; anyway, my address won’t change for the time being, as I don’t suppose that the money from Warsaw is going to show up all that quickly. If I have to leave earlier, I’ll inform you [O9] immediately. Anyway, I’ll have my mail forwarded to Paris.

I enclose expressions of profound esteem and cordially thank you once again for so kindly occupying yourself with the matter of the position for my wife. I also politely ask you not to be angry with my wife if she decides not to take up this position for the reasons I mentioned. I enclose best regards to your wife