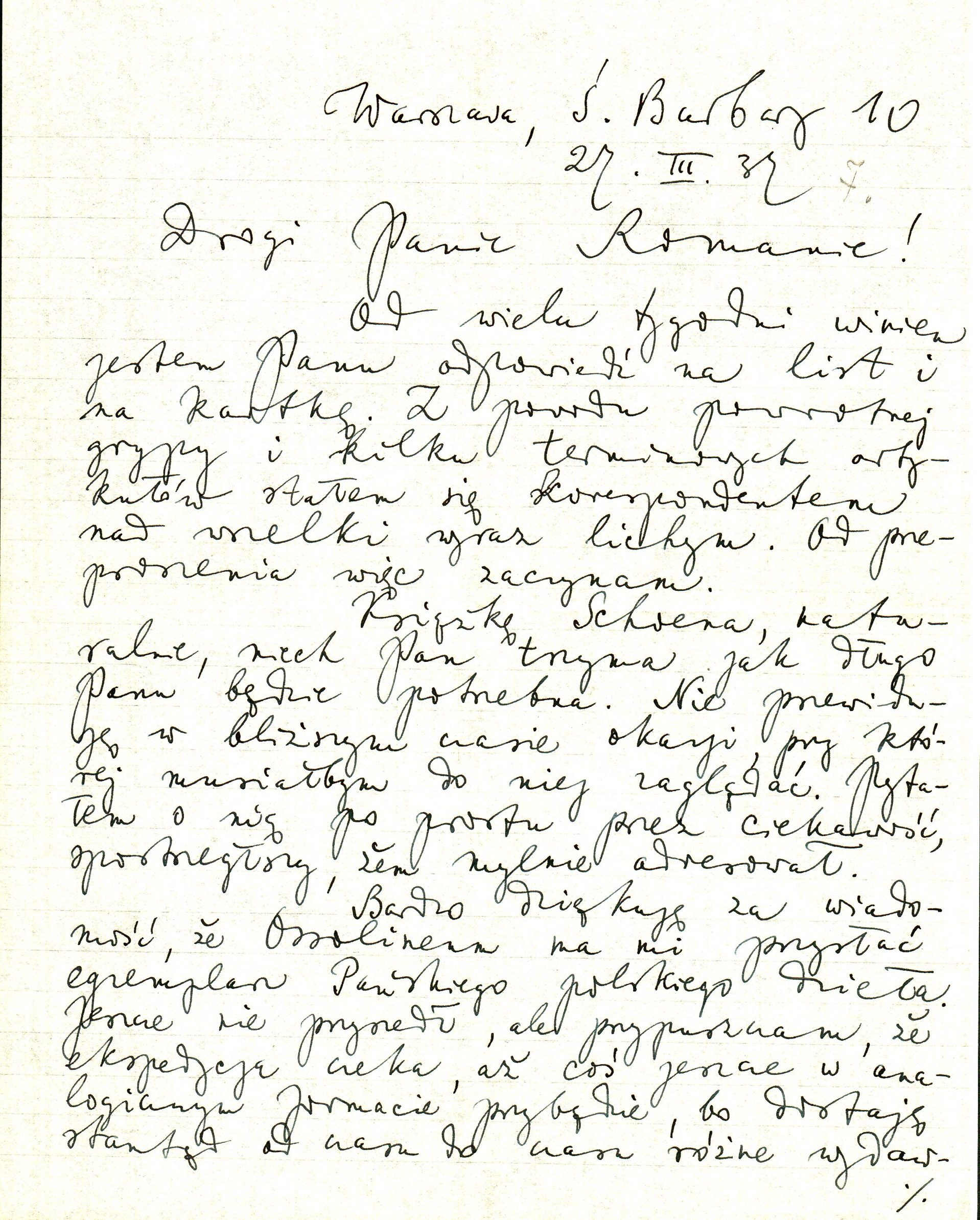 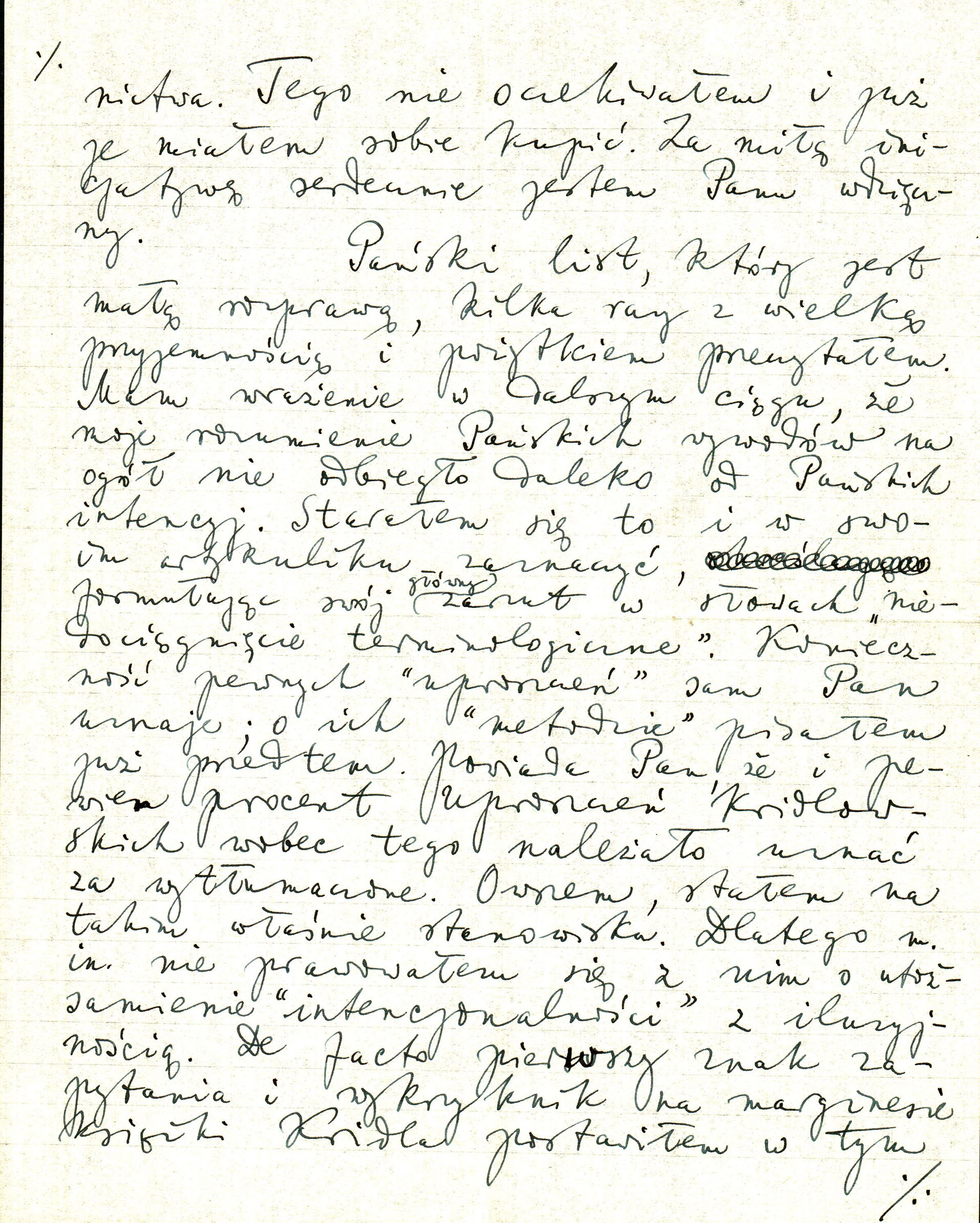 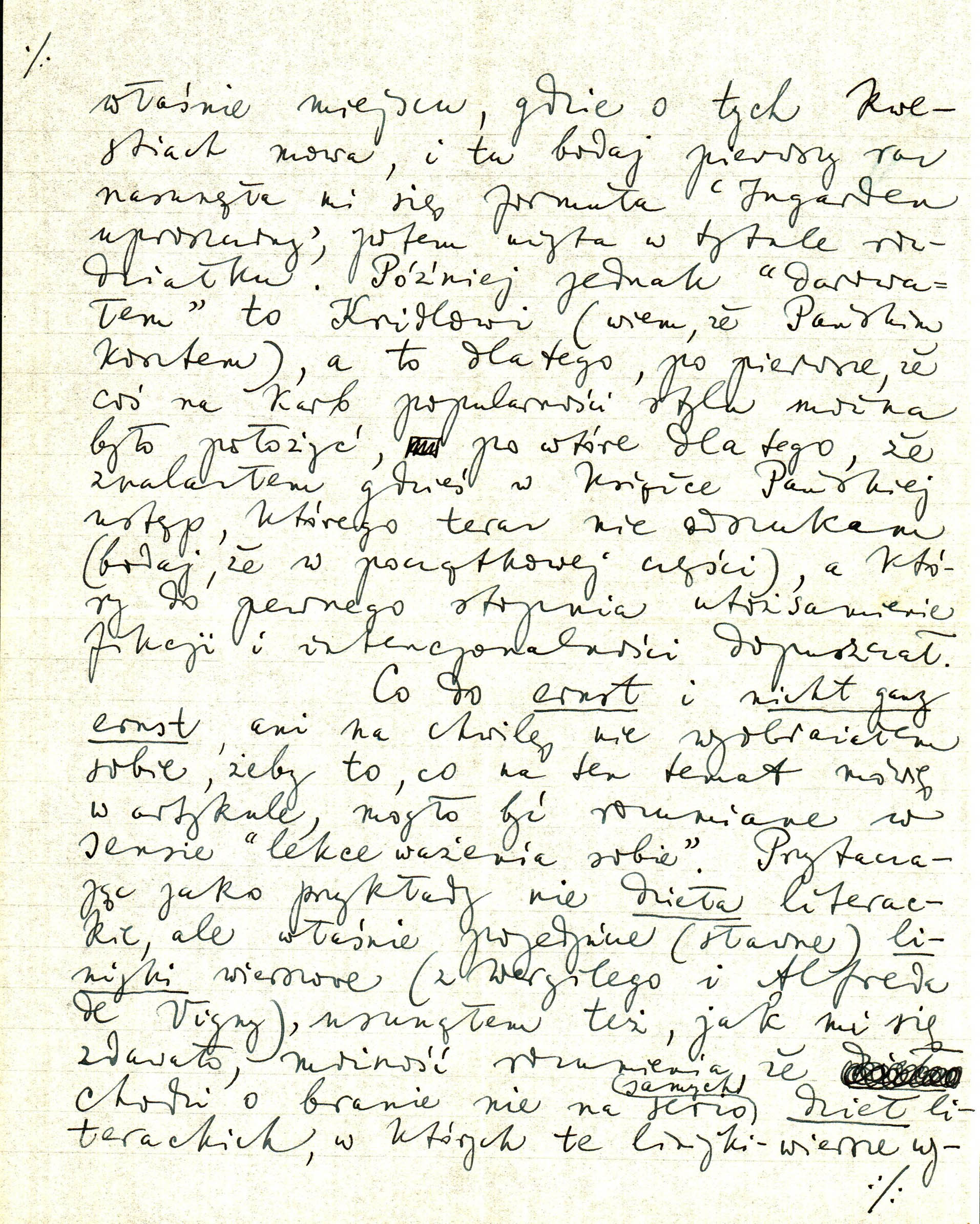 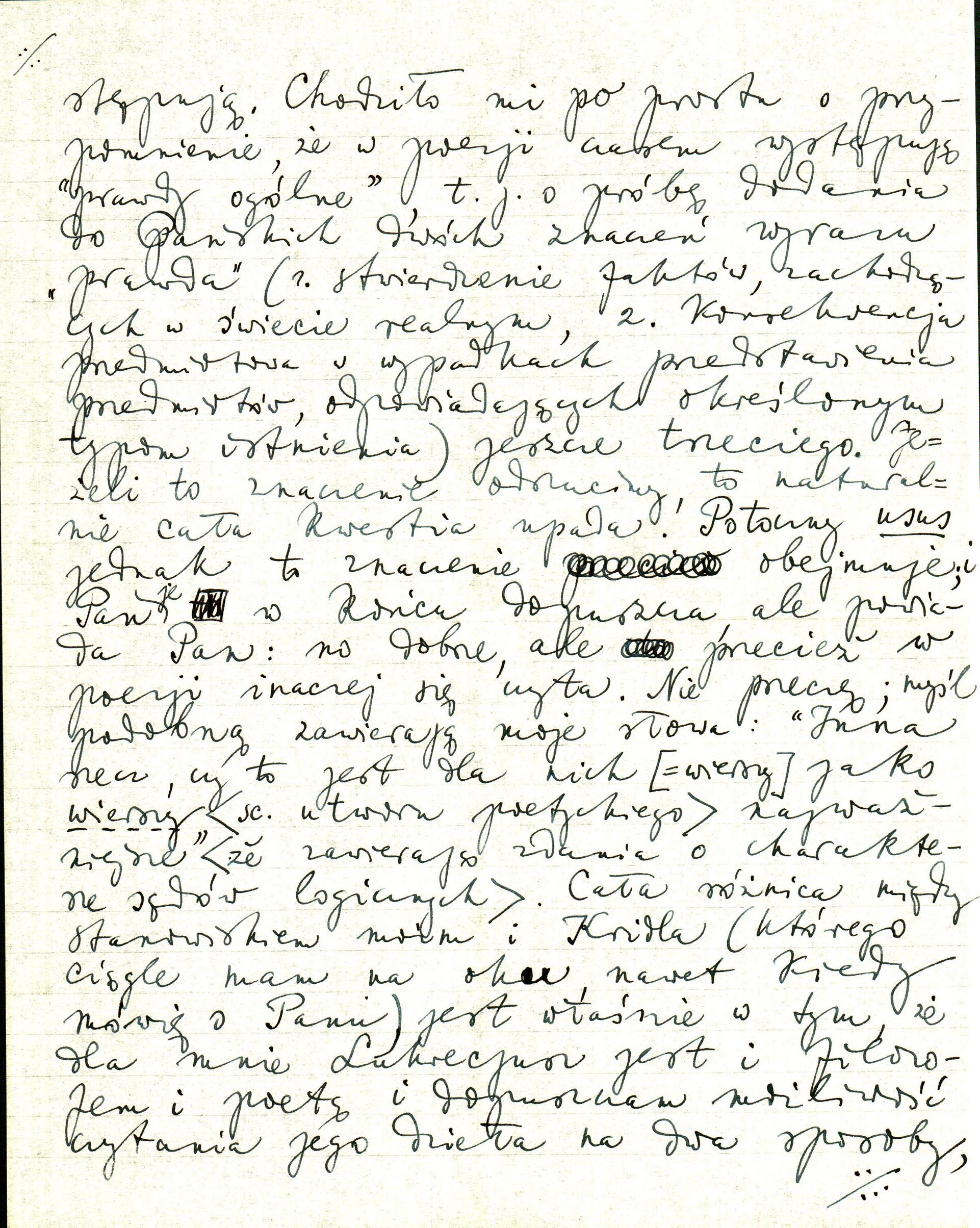 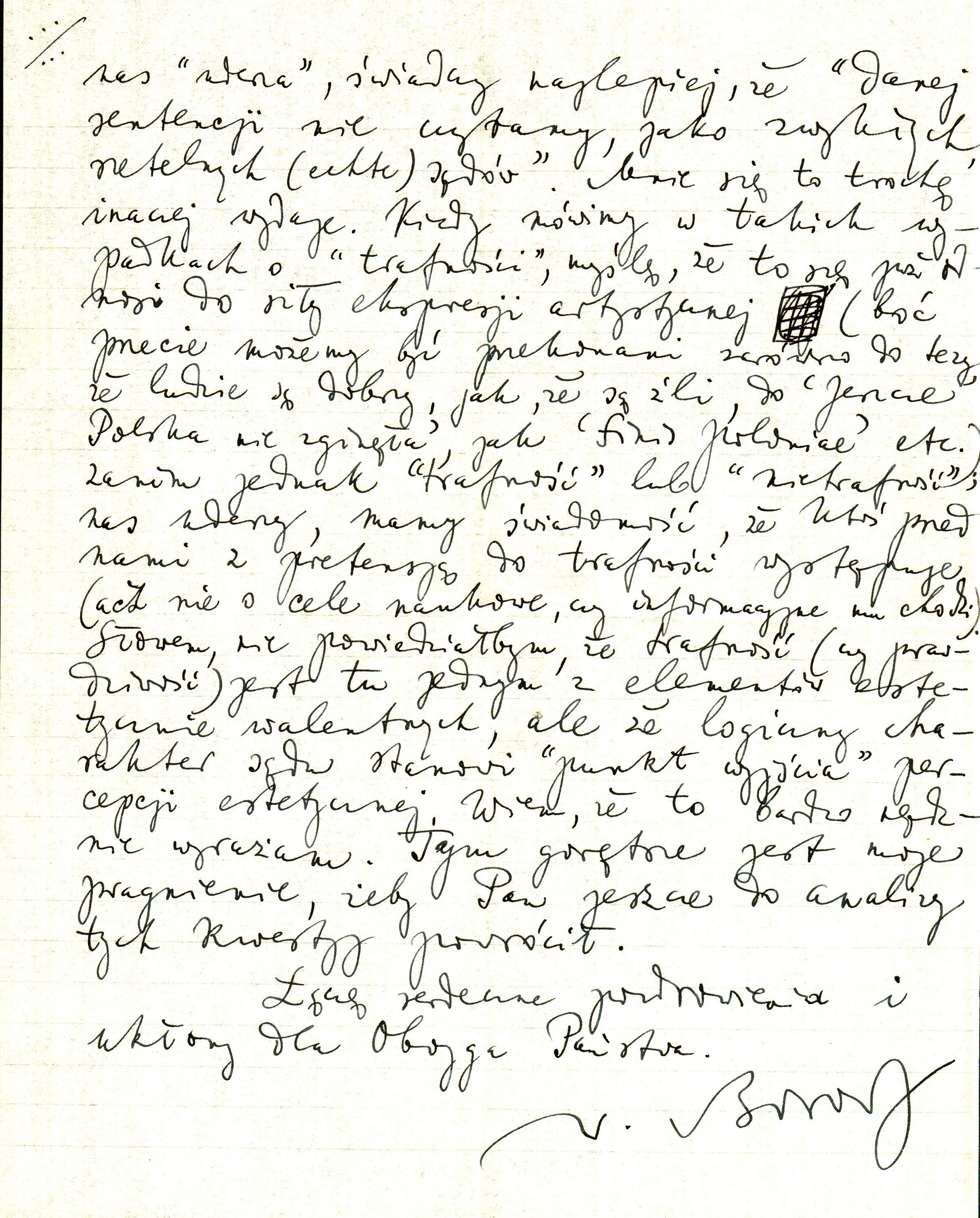 Dear Mr. Roman!
n               For many weeks now I have owed you an answer to your letter and postcard. As my flu had returned and I was also obligated by deadlines for a few articles, I seem to have become a poor correspondent, to say the least. Hence I shall start by apologizing.
n              As for Schoer’s book, of course you can keep it as long as you need. In the nearest future I am not anticipating any complaint that would make it necessary for me to refer to it. I was only asking about it simply out of curiosity, having noticed that I made a mistake in the address.
n              Thank you very much for the message that Ossolineum is to send me a copy of your Polish work. It has not arrived yet, but I suppose that the office is waiting for something else in a similar format to send with it, since I get different publications from them now and again. I was not expecting that and I was just about to buy it. I am grateful for your kind initiative.
n              Your letter, which is a small dissertation, I have read with great pleasure several times. I am still under the impression that my understanding of your arguments was generally not far from your intentions. I tried to point that out in my article as well, formulating my main complaint using the words “terminological shortcoming”. You yourself have recognized the necessity of certain “simplifications”; I have already written about the “method” employed in that process before. You say that a certain percentage of Kridl’s simplifications should then also have been considered as explained. Yes, I was of the same opinion. That is why I did not argue him, e.g. for identification of “intentionality” with illusoriness.
n              In fact, I put the first question and exclamation marks on the margin of Kridl’s book in this very place, where there is discussion of these matters, and that was probably the time the phrase “Ingarden simplified”, later used in the title of the chapter, first came to mind. Later, however, I “forgave” Kridl for it (I know it was at your expense), and that is because, first of all, some of the blame could be put on the popularity of the style, and secondly because somewhere in your book I had found a paragraph, which I cannot seem to find right now (somewhere in its initial part, I think), which allowed for identifying fiction and intentionality to a degree.
n              As for ernst and nicht ganz ernst, I have not imagined for a moment that what I say about in the article could be understood as “taking it lightly”. While not citing entire literary works as examples, and instead focusing on individual (famous) verse lines (from Virgil and Alfred de Vigny), I also thought I had eliminated any suspicion of me not taking seriously literary works in which these lines appear. It was just about a reminder that sometimes there are “general truths” in poetry, i.e. an attempt to add to your two meanings the word “truth” (1. statement of facts occurring in the real world, 2. Objective consequence in the case of presenting objects corresponding to specific types of existence) as the third. If we reject this meaning, then – naturally – the whole issue collapses. The common usus, however, includes this meaning; you allow for it in the end, but you also say: well, one reads it differently in poetry. I am not denying that; a similar thought is present in my words: “It is another thing, whether for them [= poems] as poems <poetic work> it is the most important <that they contain sentences of the character of logical judgments>. The difference between my position and Kridl’s (whom I keep in my mind even when speaking about you) is precisely that for me Lucretius is both a philosopher and poet and I allow for the possibility of reading his work in two ways, and meanwhile Kridl says (or should say: in fact, he does not explicitly present this example): these two types of reading are “psychologizing”; Lucretius preached judgments about logical preferences, hence he was a didactician; eo ipso there is no place for him in literature (same as for preachers, politicians, etc.). If I have challengend you here, it is because of the points where Kridl could have seen some support for his thick concept. Hence the criticism of your examples, taken mainly from poetry of the fictional type, and insufficient consideration of this poetry, which centers around certain “maxims” (as, I will add, well as certain autobiographical confessions in poetry, in periods of obligatory honesty *). What you write in the letter on this matter, in a sense, goes beyond my desires. You say: “Maxims” can be true in the strict sense of the word, yes; even when reading them in an aesthetic attitude, we take relevance “into consideration”; but the very fact that these relevance “is striking” is the best proof that “we do not read a given maxim as an ordinary, reliable (echte) judgments.” To me it seems to be a bit different. When we say “relevance” in such cases, I think that it at that point about the power of artistic expression (because we can be convinced both that people are good and that they are bad, that ‘Poland is not yet lost’ as well as ‘finis poloniae’ etc.); before “relevance” or “irrelevance” strikes us we are aware that someone comes before us with a claim for relevance (although I do not mean for scientific or informational purposes); in a word, I would not say that relevance (or truth) is here one of the aesthetically important elements, but instead that the logical character of the judgment is the “starting point” for the aesthetic perception. I know I am expressing myself poorly. My desire that you return to the analysis of these matters is hence all the greater.

*) I know very well that, for example, Boys (Żeleńskis) gave up on visiting Tuwim a few years ago after the song about his guests was newly created. And so things like that also occur sometimes: this is the answer to your example of the price of eggs!