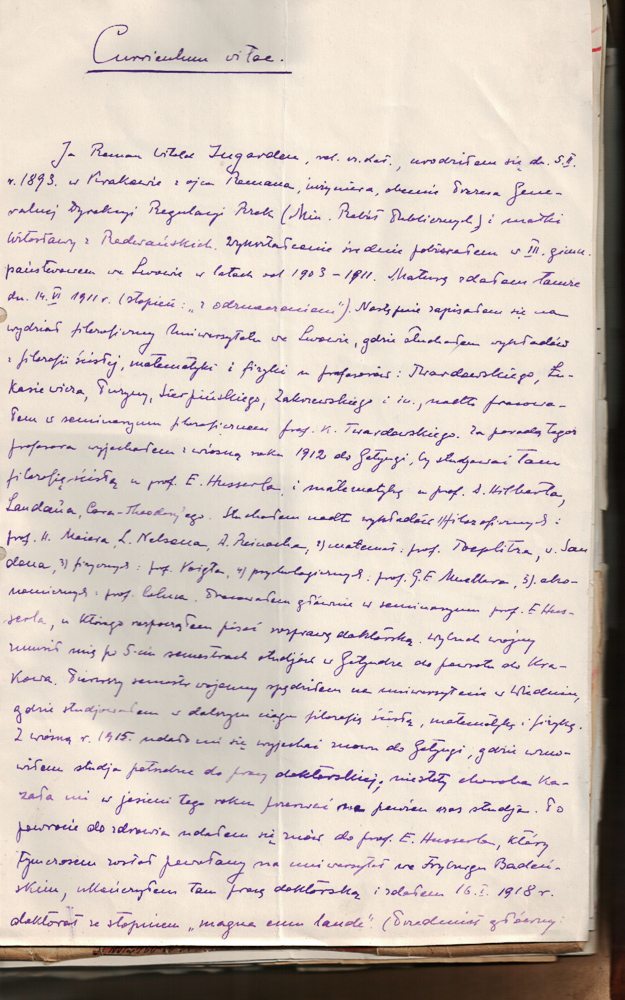 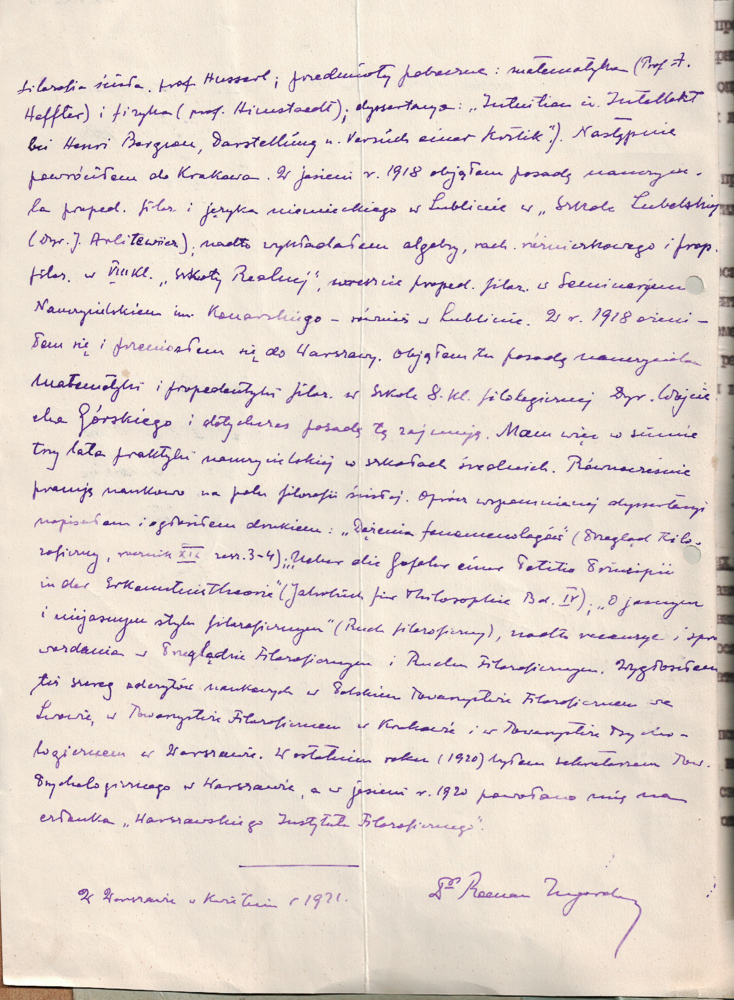 v         I, Roman Witold Ingarden, XXX, was born on 5/2/1893 in Cracow; my father is Roman, an engineer, currently President of the General Directorate for River Regulation (Min. of Public Works); my mother is Witosława n. I received my secondary education at the state middle school no. 3 in Lviv in 1903–11. I passed my matura [comprehensive examinations] there on 14/6/1911 (‘with distinction’). Subsequently I enrolled in the department of philosophy at the University of Lviv, where I attended lectures on philosophy as an exact science, mathematics, and physics with the following professors: Twardowski, Łukasiewicz, Puzyna, Sierpiński, Zakrzewski, et al.; moreover, I worked in the philosophical seminar of Prof. K. Twardowski, on whose advice I went to Göttingen in the spring of 1912, to study philosophy as an exact science there with Prof. E. Husserl and mathematics with Profs. XXX, Landau, and XXX. In addition, I attended lectures on the following: 1) philosophy: H. Maier, L. Nelson, A. Reinach, 2) mathematics: Prof. Toplitz, von Sanden, 3) physics: Prof. Voigt, 4) psychology: Prof. G. E. Mueller, 5). economy: XXX. I worked mainly in the seminar of Prof. Husserl, with whom I began writing my doctoral dissertation. The outbreak of war forced me, after five semesters of studies in Göttingen, to return to Cracow. I spent the first semester of the war at the University of Vienna, where I continued to study philosophy as an exact science, mathematics, and physics. In the spring of 1915 I succeeded in returning to Göttingen, where I resumed my studies for my doctoral thesis; unfortunately, an illness in the autumn of that year forced me to discontinue my studies for some time. Following my return to health, I went back to Prof. Husserl, who meanwhile had been appointed to a position at the University of Freiburg (Baden); there, I completed my doctoral thesis and, on 16/1/1918, achieved my doctorate ‘magna cum laude’ (main course: philosophy as an exact science with Prof. Husserl; secondary courses: mathematics (Prof. L. Heffter) and physics (Prof. Himstedt); dissertation: Intuition u.[nd] Intellekt bei Henri Bergson, Darstellung u.[nd] Versuch einer Kritik [German: Intuition and intellect according to Henri Bergson: a representation and attempt at a critique]. Subsequently, I returned to Cracow. In the autumn of 1918 I took the position of a teacher of the propaedeutics of philosophy and German in Lublin at the ‘Lublin School’ (Headmaster J. Arlitewicz); in addition, I lectured on algebra, differential calculus, and the propaedeutics of philosophy in the eighth class of the ‘Real School’, and, finally, the propaedeutics of philosophy at the Konarski Teachers’ Seminar, also in Lublin. In 1918 I married and relocated to Warsaw. I took a position here as a teacher of mathematics and propaedeutics of philosophy in the 8th class of the Philological School of Wojciech Górski, a position I have continued to occupy. Thus I have a total of 3 years of teaching practice in secondary schools. At the same time, I’m working creatively in the field of philosophy as an exact science. Apart from the above-mentioned dissertation, I’ve written and published: ‘Dążenia fenomenologów’ [The aspirations of phenomenologists] (Philosophical Review, year XIX, issues 3, 4); ‘Ueber [Über] die Gefahr einer Petitio principii in der Erkenntnistheorie’ [German: On the danger of a petitio principii {Latin: begging the question} in cognition theory] (Philosophical Yearbook Vol. IV); ‘O jasnym i niejasnym stylu filozoficznym’ [On clear and unclear philosophical style] (Philosophical Movement); and reviews and reports in Philosophical Review and Philosophical Movement. I’ve also delivered a number of scientific lectures at the Polish Philosophical Societies in Lviv, Cracow, and Warsaw. During the past year (1920) I’ve been the secretary of the Psychological Soc. in Warsaw; in the autumn of 1920 I was admitted as a member of the ‘Warsaw Philosophical Institute’.