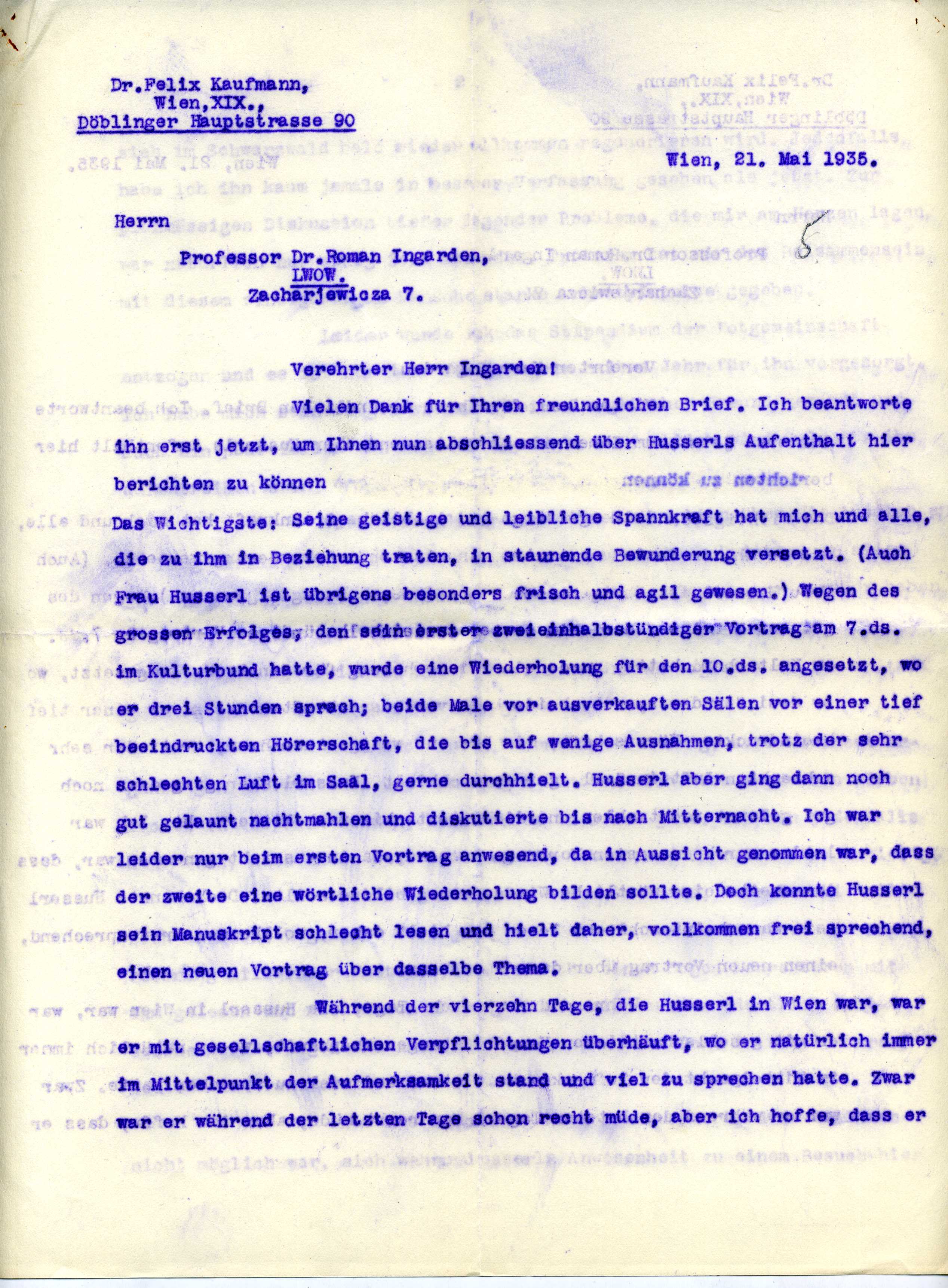 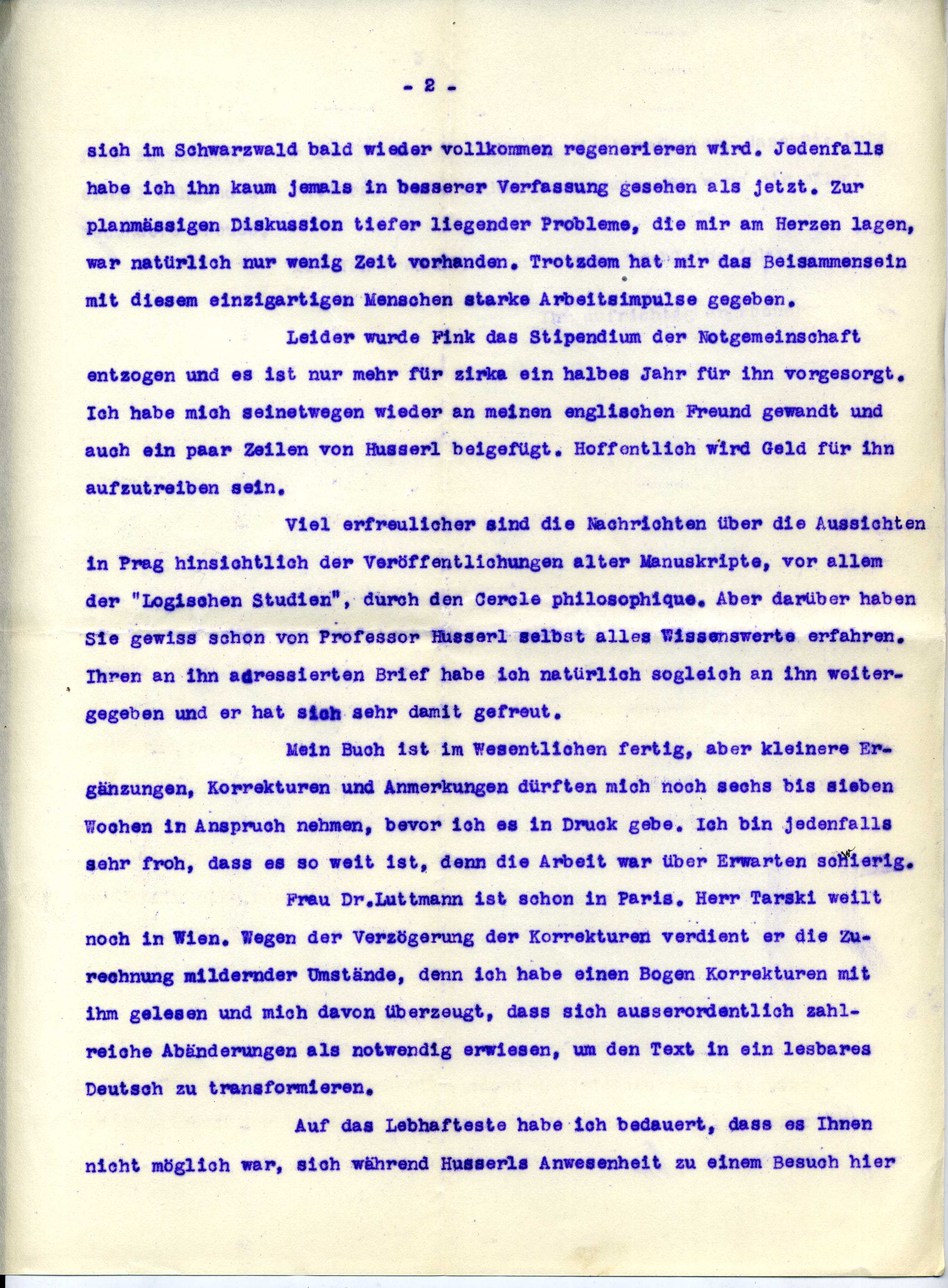 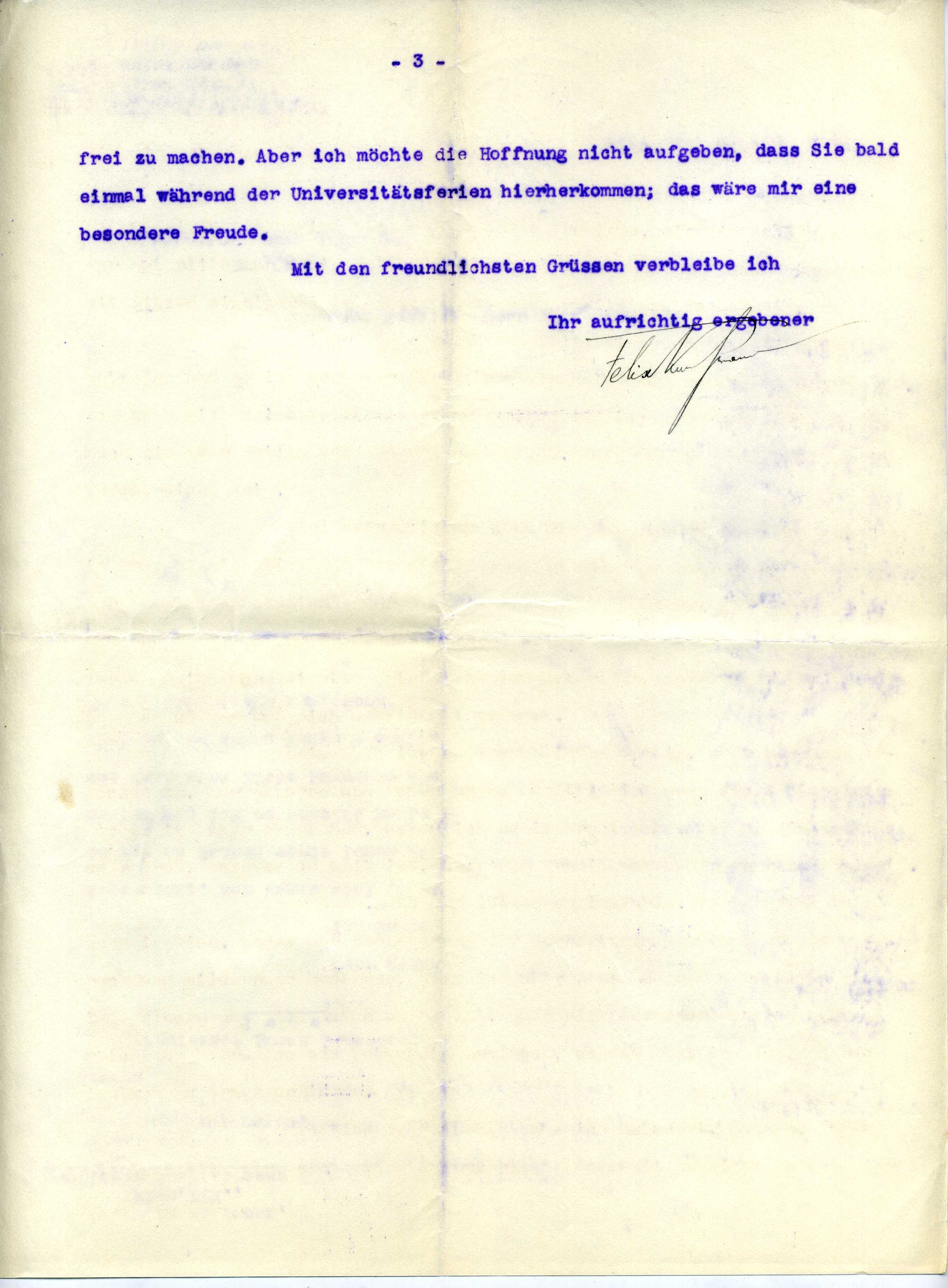 n               Dear Mr. Ingarden,
n               Thank you for your kind letter. I am just now replying to your letter to be able to include a report on Husserl’s stay in my response.
n               Most importantly: His intellectual and physical force commanded my full admiration as well as the admiration of everyone around him. (By the way, Mrs. Husserl was very refreshing and agile too, if I may add.) Due to the great success of his first lecture on May 7 at the Kulturbund Cultural Association, which lasted one and a half hours, a second lecture on the same topic was scheduled for May 10 – this time lasting three hours! Both times, the lecture hall was completely sold out and filled with a deeply impressed audience which persevered, with a few exceptions, gladly and rather well considering the poor air quality in the lecture hall. Afterward, Husserl cheerfully went out for supper and held discussions until past midnight. Unfortunately, I only attended the first lecture because the second one was supposed to be a verbatim repetition of the first lecture. However, Husserl couldn’t read his manuscript very well that night and therefore decided to speak without notes on the same topic.
n               Husserl was besieged with social commitments during the fourteen days he spent in Vienna, where, of course, he was the center of the attention and had a lot to talk about. He was quite tired at the end of his stay, but I hope he will soon regenerate and revitalize in the Black Forest. In any event, I don’t think I have seen him in better shape than this time around.
n               Of course, there was only little time to discuss broader issues that I feel strongly about. Nevertheless, being around this unique individual gave me great momentum and work impulses.
n               Unfortunately, Fink lost his stipend from the Notgemeinschaft (“Emergency Association”), and he only has enough money left for about six months. I wrote an English friend of mine on his behalf and included a few lines from Husserl. I hope we can secure funding for him.
n               Much more pleasant is the news from Prague regarding the possible publication of old manuscripts, particularly “Logical Studies” by Cercle Philosophique. I am sure Professor Husserl already shared the pertinent information with you. I immediately gave him your letter that was addressed to him and he was very happy about it.
n               My book is essentially finished; however, minor amendments, corrections, and explanatory notes might take another six to seven weeks for me to complete before I can send it off to the printer. Anyhow, I am quite pleased that I have arrived at this point, because the work was much more difficult than I had expected.
n               Dr. Luttmann is already in Paris. Mr. Tarski is still in Vienna. He deserves extenuating circumstances regarding the delayed corrections because when I proofread some pages with him, I realized that it requires a lot of editing to transform the text into readable German.
n               I truly regret that you weren’t able to get time off to visit while Husserl was in town.

n               However, I am not giving up hope that you will soon be able to visit during the semester break. This would be a special pleasure for me.