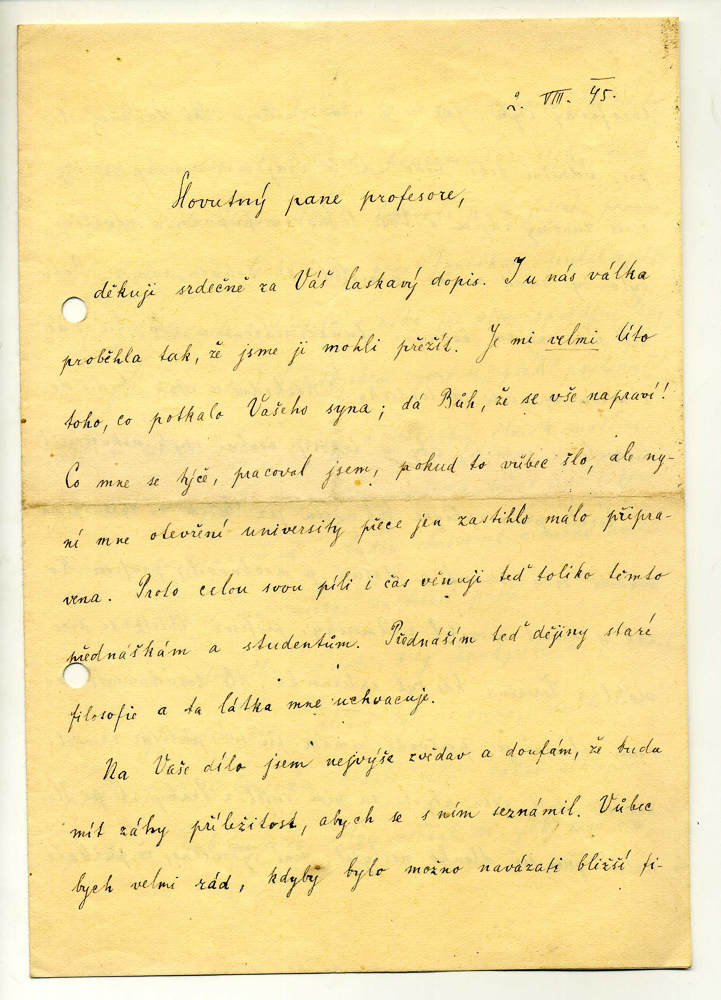 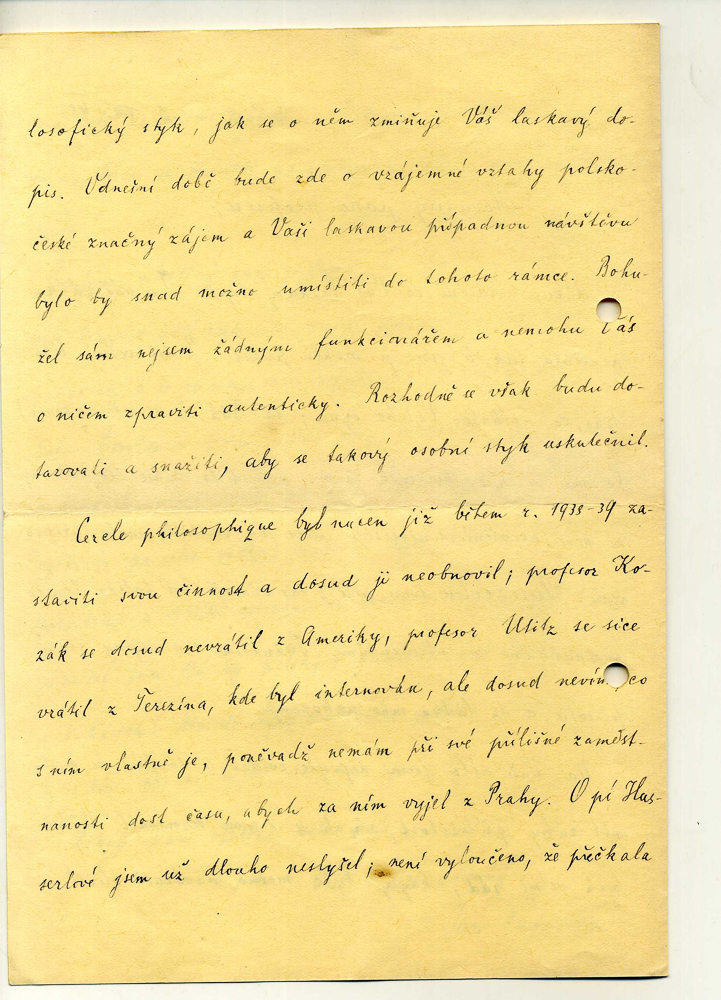 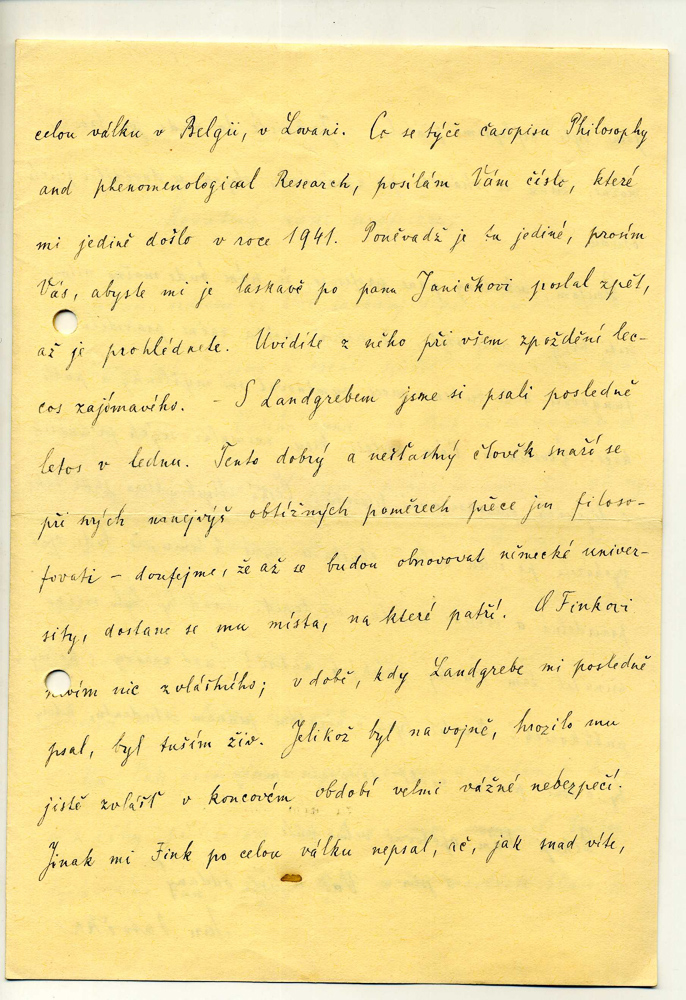 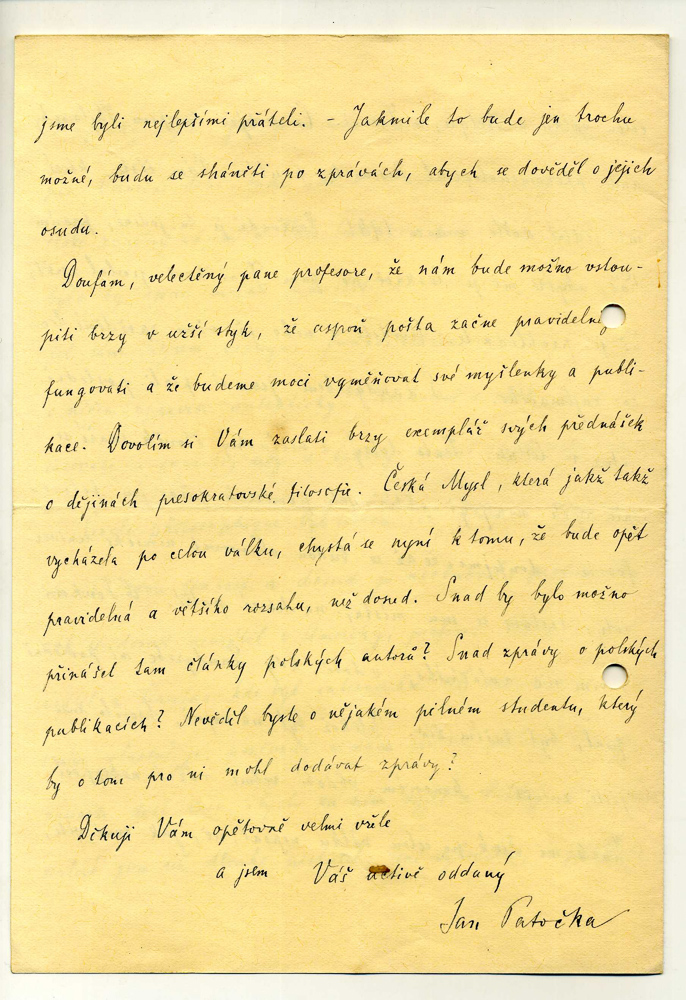 n    Thank you very much for your kind letter. The war here was not as dreadful as elsewhere and we managed to survive it. I am terribly sorry about what happened to your son and am praying that everything will turn out alright! As regards me personally, I worked when possible, but now that the University has reopened, I have been caught unprepared. So I am now devoting all my time and effort to lecturing and to my students. I am currently lecturing on the history of ancient philosophy and am finding the whole topic fascinating.
n    I really look forward to your publication and hope that I will soon have an opportunity to read it. I would be delighted if closer philosophical contacts could be established, as you mention in your kind letter. There is bound to be major interest in Polish-Czech relations here under the current climate and your visit would only go to bolster that interest. Unfortunately, I am not a civil servant and am not in a position to make such decisions myself, so I cannot give you any further details. But I will definitely ask and try to ensure that such face-to-face contact does come to pass.
n    The Cercle philosophique de Prague [Prague Philosophical Circle] was forced to cease activities back in 1938-39 and has not yet started up again; Professor [Jan Blahoslav] Kozák has not yet returned from America; although Professor [Emil] Utitz has returned from Terezín[1] where he was interned, I do not know what the situation is with him at the moment, because I am too busy to leave Prague and go and see him. I have not heard any news about Mrs Husserl[2] for some time; it is possible that she survived the war in Leuven in Belgium. As regards Philosophy and Phenomenological Research, I am enclosing the only issue I received in 1941. Because it is the only one I have, I would be very grateful if you would send it back to me via Mr Janiček after reading it. You will find lots of interesting things in there, even though it is from so long ago. The last time I exchanged letters with [Ludwig] Landgrebe was back in January of this year. Even though he finds himself in really dire circumstances, this poor, kind-hearted man is devoted to philosophy and we can only hope that he will receive the appointments he deserves when the German universities are back up and running. I do not have any precise news about [Eugen] Fink; I think he was alive when Landgrebe last wrote to me. Since he was serving in the army, he was no doubt in serious danger, especially towards the end of the war. He did not write to me at all over the course of the war, even though we were the best of friends, as you perhaps know. I will try and find out what has become of them as soon as it is possible to do so.
n    I do hope that we will soon be able to establish closer contact Professor and that postal services at least will start operating more regularly so that we are able to exchange our thoughts and publications. I am going to take the liberty of sending you a copy soon of my lectures on the History of Presocratic Philosophy. Česká Mysl[3], which came out in one way or another throughout the war, is set to be published on a regular basis and with more content than before. Perhaps some articles could be contributed from Polish authors? Perhaps some news about Polish publications? Can you think of a conscientious student who might be able to provide such input for the publication?

Many thanks once again.
n    With my deepest respects,

[3] Translator’s note: literally “Czech Mind” – a publication of the Jednota filosofická [Philosophical Association] in Prague from 1900 to 1947