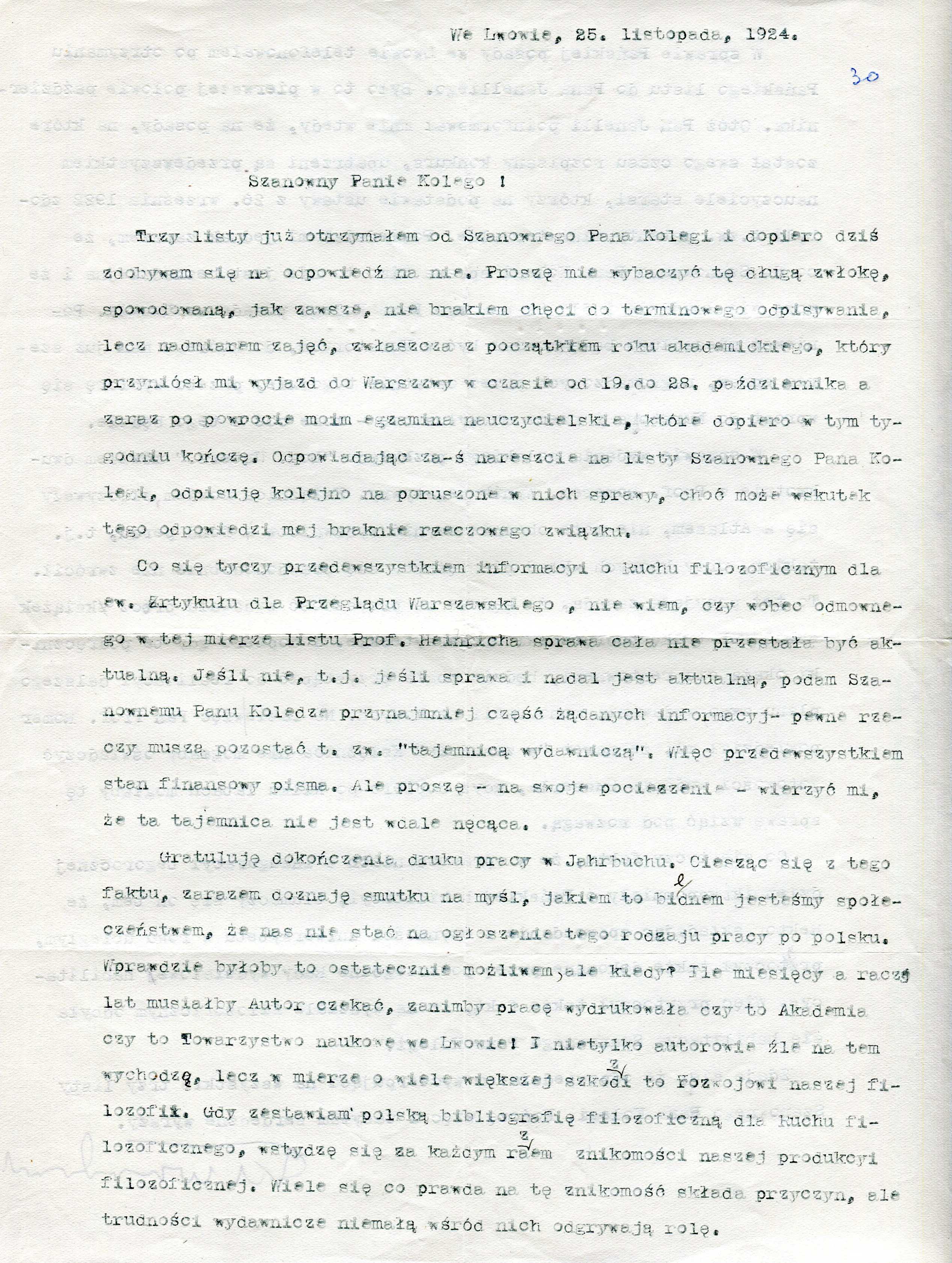 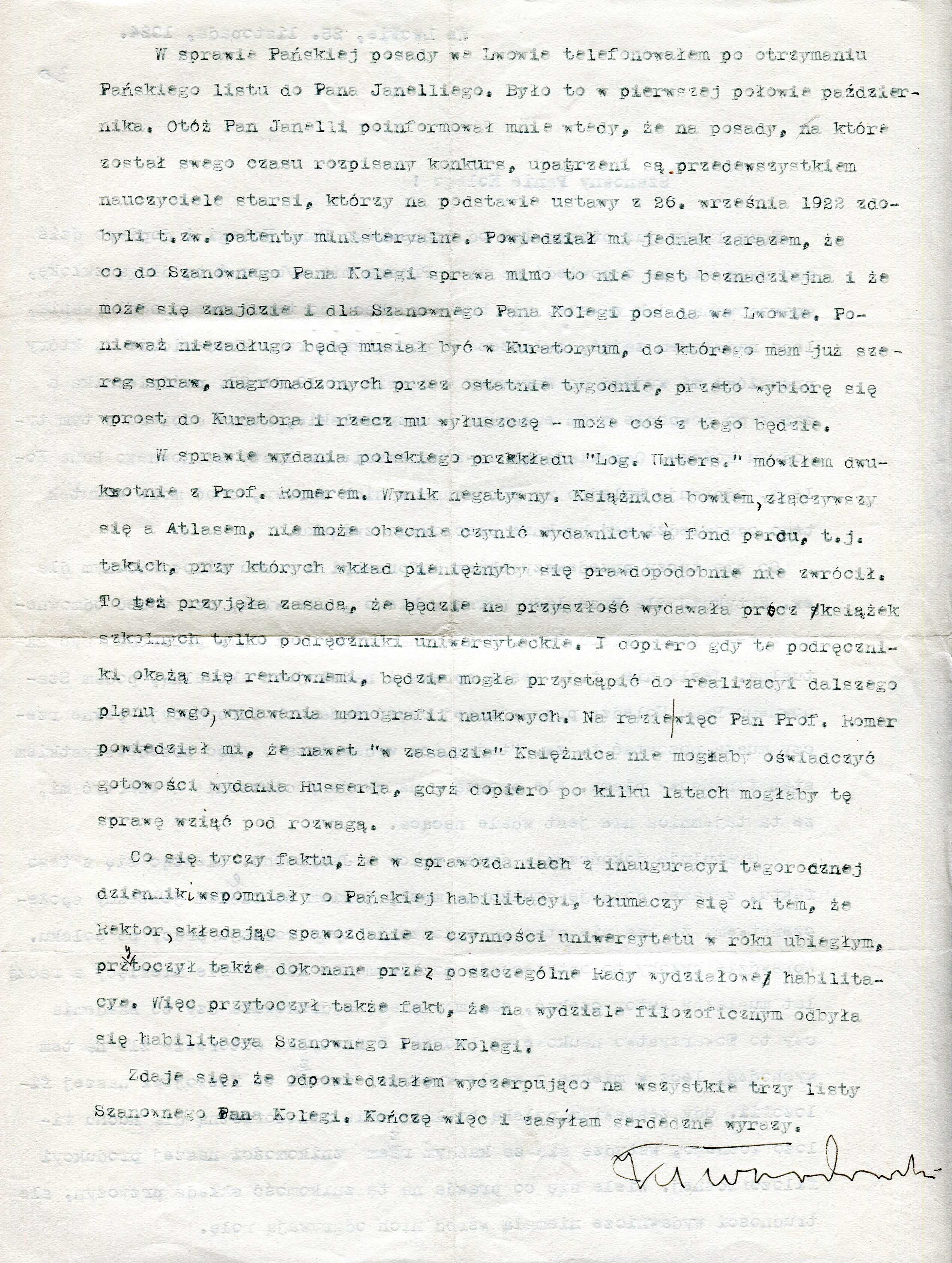 I’ve already received three letters from you, and it’s only today that I’m getting around to answering them. Please forgive me for this long delay, caused, as always, not by any lack of willingness to reply in a timely manner, but by an overload of classes, especially with the beginning of the academic year, which brought me a trip to Warsaw from 19 to 28 October, as well as, immediately after my return, my teaching exams, which I’m only finishing this week. In finally responding to your letters, I’m writing back in sequence to the matters raised therein, even if, as a consequence of this response of mine, material continuity will be found lacking.

First of all, as regards information about Philosophical Movement for the potential article for Warsaw Review, I don’t know whether, in light of the relevant refusal in Prof. Heinrich’s letter, the question has ceased to be relevant. If not, i.e. if the matter is still current, I’ll give you at least some of the requested information ‒ some things must remain so-called ‘publishing secrets’, above all the financial condition of the journal. But please – by way of consolation ‒ believe me: these secrets are not alluring in the least.

Congratulations on the completion of the printing of your paper in [Philosophical] Yearbook. While I’m pleased at this news, at the same time I’m saddened by the thought of what a poor society we are, since we can’t afford to publish this kind of paper in Polish. True, it might ultimately be possible, but when? How many months, or, rather, years must an Author have to wait before the Academy or the scientific Society in Lviv prints a paper? And this is not only bad for authors, but harms, to a much greater extent, the development of our philosophy. Each time I compile the Polish philosophical bibliography for Philosophical Movement, I’m ashamed of the insignificance of our philosophical production. Truly, there are many reasons for this insignificance, but among them, publishing difficulties play a significant role.

As regards the question of your position in Lviv, after receiving your letter, I telephoned Mr Janelli. This was in the first half of October. Well, Mr Janelli informed me at that point that the positions for which the competition had been announced had been filled primarily by older teachers, who, on the basis of the Act of 26 September 1922, had obtained the so-called ministerial patents. At the same time, he told me that nevertheless, your situation is not hopeless and that a position in Lviv may be found for you as well. Because I’ll have to be at the Board, where I already have a series of issues accumulated over the past weeks, before long, I’ll go straight to the Superintendent and explain it to him ‒ maybe something will come of it.

Regarding the matter of publication of a Polish translation of Log. Unters. (Logische Untersuchungen [Logical Investigations]), I spoke to Prof. Romer twice. The result was negative. Indeed, [Polish] Library, having merged with Atlas, at present cannot publish anything à fond perdu [French: at a total loss], i.e. those publications for which there will likely be no return on investment. They’ve also adopted the principle that in the future, apart from schoolbooks, they’ll publish only university textbooks, and only when these textbooks prove profitable will they be able to proceed to the implementation of their subsequent plan to publish scientific and academic monographs. For now, therefore, Prof. Romer told me that even ‘in principle’ Library couldn’t state their readiness to publish Husserl; not until several years have passed will they be able to take this matter under consideration.

It seems that I’ve replied exhaustively to all three of your letters. Thus I’ll close and send cordial regards.

Letter to the Committee of the Library of Classics of Philosophy written 26.05.1952