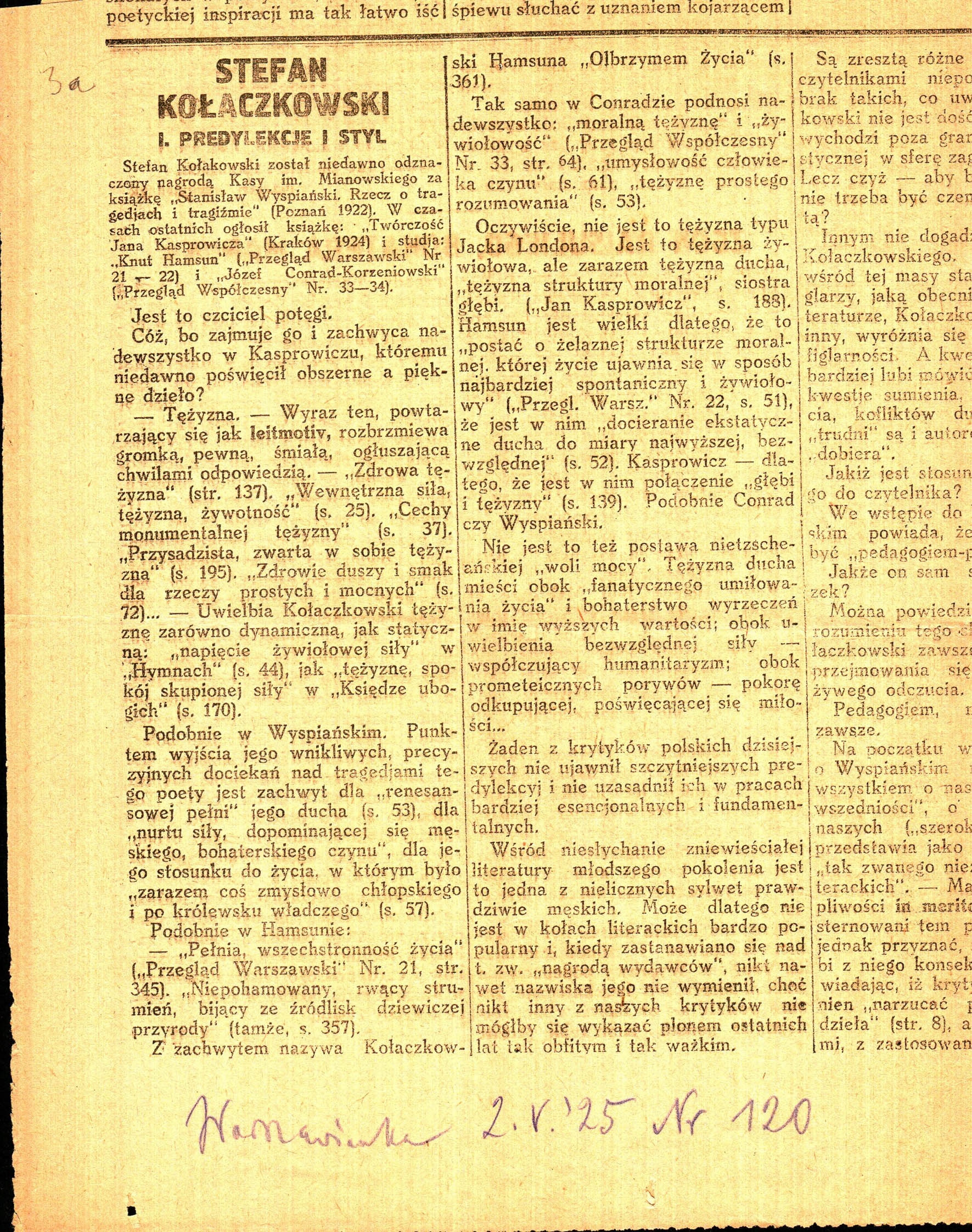 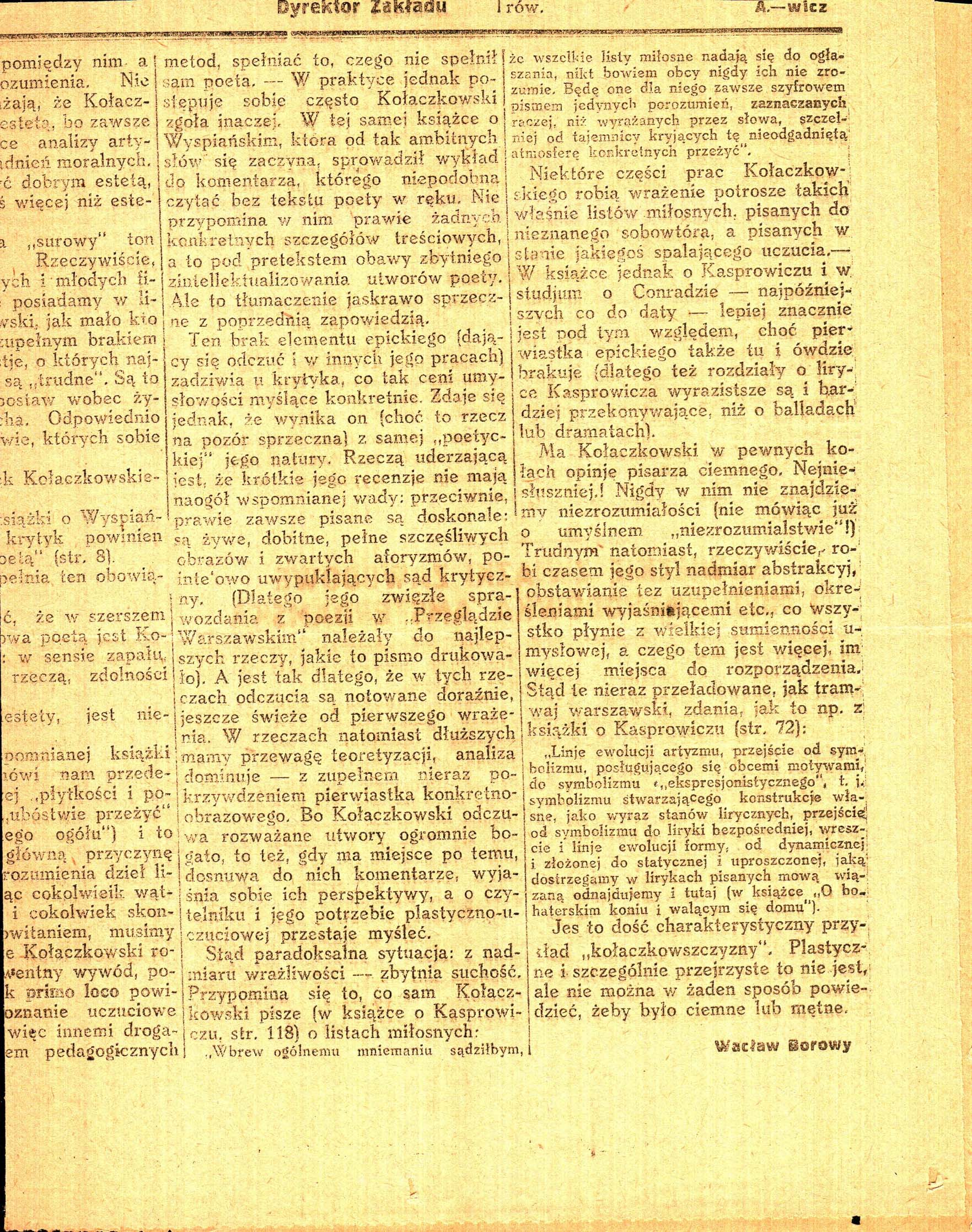 Stefan Kołakowski was recently awarded the prize of the Józef Mianowski Fund for the book “Stanisław Wyspiański. About Tragedy and the Tragic” (Poznań 1922). Recently he published a book: • “Works of Jan Kasprowicz” (Krakow 1924) and the studies: “Knut Hamsun” (“Warsaw Review” Vol. 4 No. 21 – 22) and “Joseph Conrad-Korzeniowski “Contemporary Review” No. 33-34).
n   He is a worshiper of power.
n   For what else could it be that draws and delights him above all in Kasprowicz, to whom he has recently devoted an extensive and beautiful work?
n   – Vigor. – This word, repeating like a leitmotiv, resounds as a thunderous, confident, daring, deafening response. – “Healthy vigor” (p. 137). “Inner strength, vigor, vitality” (p. 25). “Features of monumental vigor” (p. 37). “stocky, tight vigor” (p. 195). “Soul’s health and taste; for simple and strong things” (p. 72) … – Kołaczkowski loves vigor, both dynamic and static: “the tension of elemental force” in “Hymns “(p. 44), as well as “vigor, the calm of a focused power” in “The Book of the Poor”(p. 170).

n   Similarly with Wyspiański. The starting point of his insightful, precise investigation of this poet’s tragedies is the admiration for the Renaissance fullness of his spirit (p. 53), for the “current of strength, demanding a masculine, heroic act”, for his attitude to life in which he was “something both sensually peasant and royally imperious”(p. 57).

n   Likewise, in Conrad’s case he raises, “moral vigor” and “spontaneity” above all else (“Contemporary Review” No. 33, p. 64), “the mind of the man of action” (p. 61), “the vigor of simple reasoning” (p. 53). Of course, this is not vigor typical of someone like Jack London. It is an impetuous vigor, but also the vigor of the spirit, “vigor of the moral structure”, sister of depth (“Jan Kasprowicz”, p. 188). Hamsun is great because he is “a figure of an iron moral structure, whose life is revealed in the most spontaneous and impulsive way” (“Wars. Rev.” No. 22, p. 51), that there is “an ecstatic reaching of the spirit to the highest, the absolute” (p. 52) within him. Kasprowicz – because he combines “depth and vigor “(p. 139). Same with Conrad or Wyspiański.

n   Nor is it the attitude of Nietzsche’s “will to power.” The vigor of the spirit fits alongside the “fanatical love of life” and the heroism of sacrifice in the name of higher values; next to the adulation of absolute strength – compassionate humanitarianism; next to prometeic impulses – humility of redeeming, self-sacrificing love…
None of today’s Polish critics have revealed more lofty predilections nor justify them in more fundamental and expressive works.

n   Among the extremely effeminate literature of the younger generation, he is one of the few truly masculine figures. Perhaps that is why he is not very popular in literary circles, and when the considerations over the “prize of the publishers” were taking place, no one even mentioned his name, although no other critic could present such abundant and significant yield in the recent years.

n   Besides, there are various misunderstandings between him and the readers. There is no shortage of those who think Kołaczkowski is not enough of an an esthete, because he always ventures beyond the limits of artistic analysis and into the sphere of moral issues. But do you not have to be something more than an esthete to be a good esthete?
n   Others do not like Kolaczkowski’s “raw” tone. Indeed, among this mass of old and young tricksters we currently have in literature, Kołaczkowski, like no other, stands out with a complete lack of trickery. And the issues that he likes to talk about most are “difficult”. These are the issues of conscience, attitudes towards life, conflicts of the spirit.

The authors he “picks out” for himself are equally “difficult”.
n   What is Kołaczkowski’s attitude towards the reader?
n   In the introduction to the book on Wyspiański, he says that a critic should be a “teacher-poet” (page 8).
n   How does he fulfill this duty himself?
n   One can say that in a broader understanding of this word, Kołaczkowski is always a poet in the sense of enthusiasm, caring for the issue, the capacity of vivid sensation.
n   Unfortunately, he is not always a teacher.

n   At the beginning of the aforementioned book about Wyspiański, he tells us above all about our “shallowness and commonness”, about our “poverty of experiences” (of the “wide public”) and presents it as the main reason for the so-called misunderstanding of literary works. – While we may have doubts in merito and feel dismayed with this greeting, we must admit that Kołaczkowski makes a consistent argument, saying that a critic primo loco should “impose the emotional cognition of a work” (p. 8), so in other ways, using pedagogical methods, fulfill what the poet failed to do themselves. — In practice, however, Kolaczkowski often behaves differently. In the same book about Wyspianski, which begins with such ambitious words, he brought the lecture down to a commentary that is impossible to read without the poet’s text in his hand. He does not bring forward almost any concrete details from the work’s content, and all that under the pretext of concern for not overintellectualizing the poet’s works. But this explanation is clearly contradictory to the previous statement.
n   This lack of the epic element (feasible also in his other works) is suprising in a critic who so values concrete minds. It seems, however, that it stems (although it is seemingly contradictory) from his very “poetic” nature. It is striking that his short reviews do not tend to have this shortcoming; on the contrary, they are almost always written perfectly: they are vivid, emphatic, full of happy images and tight aphorisms, poignantly emphasizing the critical judgment. (That is why his concise reports on poetry in the Warsaw Review were among the best things that this magazine has printed). And this is because in these things feelings are listed ad hoc, fresh from the first impression. In the case of the longer ones, however, we have the advantage of theorizing, the analysis dominates – with a complete injustice to the concrete and pictorial element. Because Kołaczkowski experiences the considered works deeply, so when it takes place, he also supplements them with comments, explains their perspectives, and ceases to think about the reader and their artistic and emotional need.
n   Hence the paradoxical situation: excessive sensitivity gives birth to excessive dryness. It is similar to what Kołaczkowski himself writes (in the book on Kasprowicz, p. 118) about love letters:
n   “Contrary to general consensus, I would think that all love letters are suitable for announcing, for no third party will ever fully understand them. For them they will always remain a cipher in the form of only agreements, marked rather than expressed by words, guarding the unknown atmosphere of specific experiences closer than a secret.”
n   Some parts of Kołaczkowski’s works give an impression of being just such love letters, written to an unknown double, and written in the state of some burning sensation. – However, in the book on Kasprowicz and in the study about Conrad – the latest one to date – he has improved in this respect, although the epic element also seems to be missing here and there (that is why the chapters on Kasprowicz’s lyric poetry are more expressive and convincing than those on ballads or dramas) .

Kołaczkowski does, in certain circles, have the opinion of a dark writer. Most unfairly! We will never find incomprehensibility in his works (let alone deliberate “incomprehension”!). On the other hand, indeed, his style is made difficult by the excess of abstracts, the supplementation of the theses with explanations etc., everything that flows from great mental diligence, and which becomes more extensive the more room there is for considerations. Hence, the sentences overcrowded sometimes like a Warsaw tram, as, for example, this one from the book on Kasprowicz (p. 72):

n   “Here as well, we can find the lines of the evolution of artistry, the transition from symbolism using foreign motifs, to “expressionist” symbolism , i.e. one creating its own constructions as an expression of lyrical states, the transition from symbolism to direct lyricism, and finally the lines of evolution of form, from dynamic and complex to static and simplified, which we see in the poetry written in oratio vincta (in the book “About the heroic horse and the collapsing house”).
n   This is a quite characteristic example of “kołaczkowskishness.” It is not particularly plastic and transparent, but in no way can it be described as dark or cloudy.