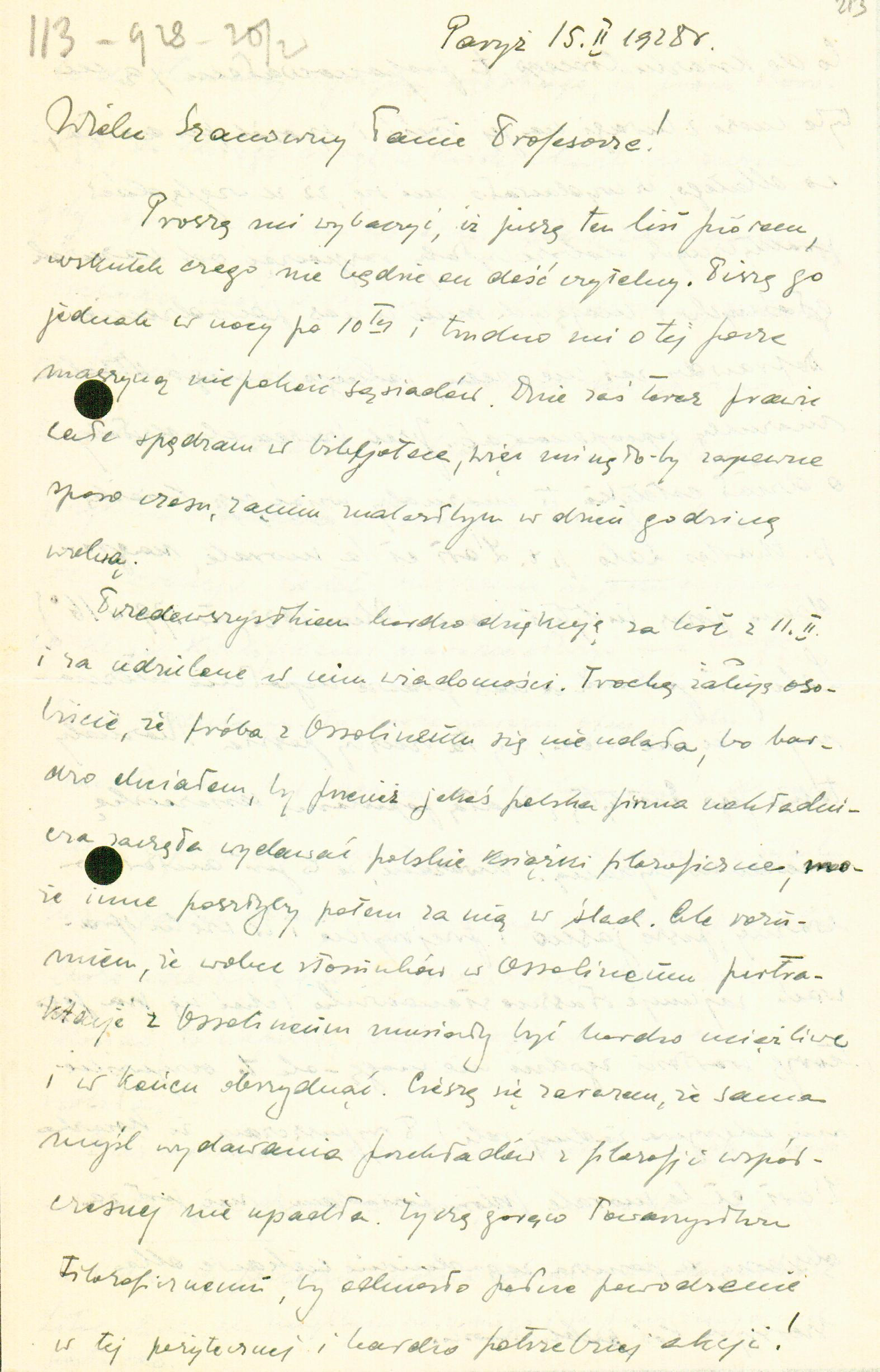 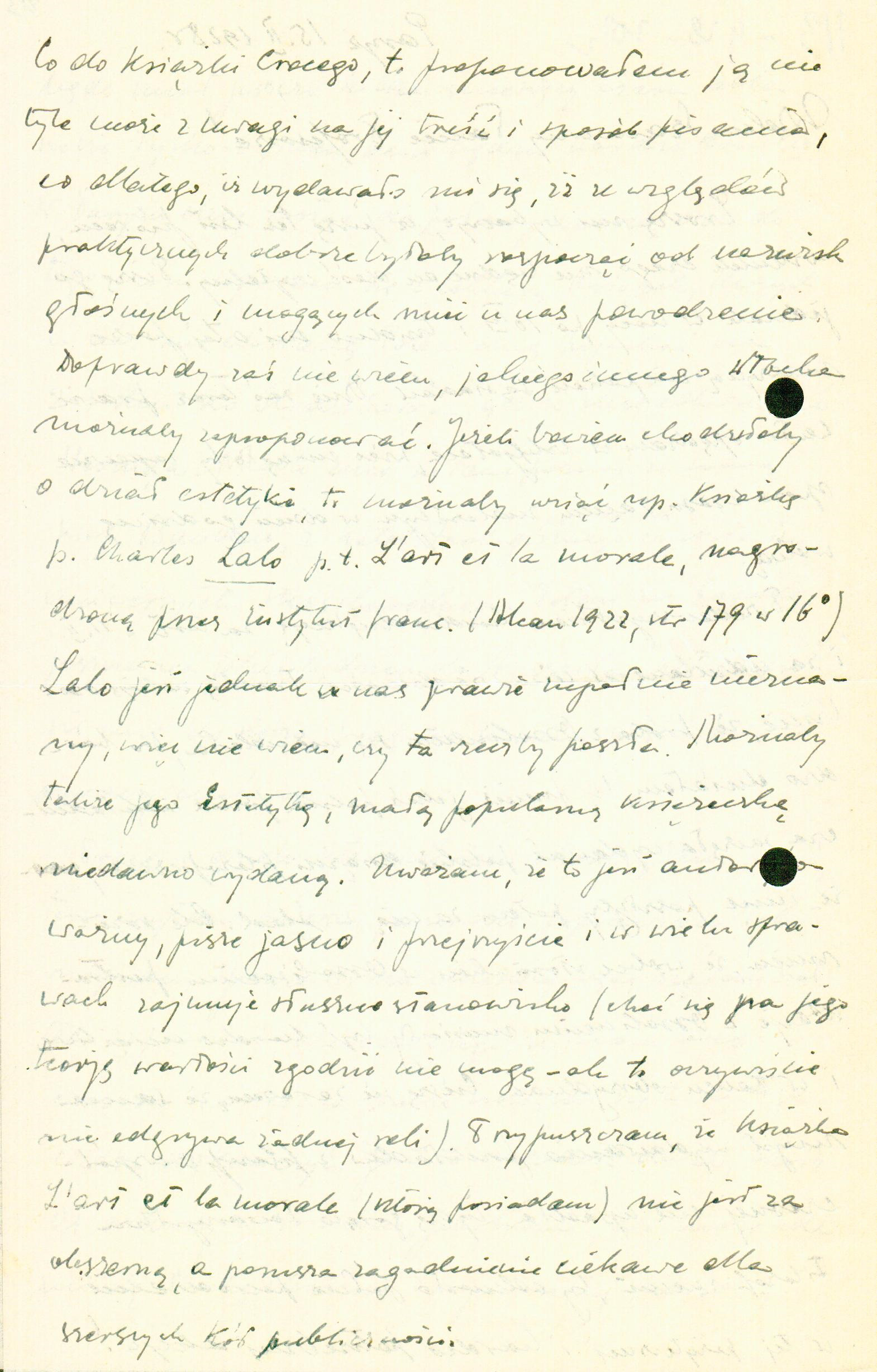 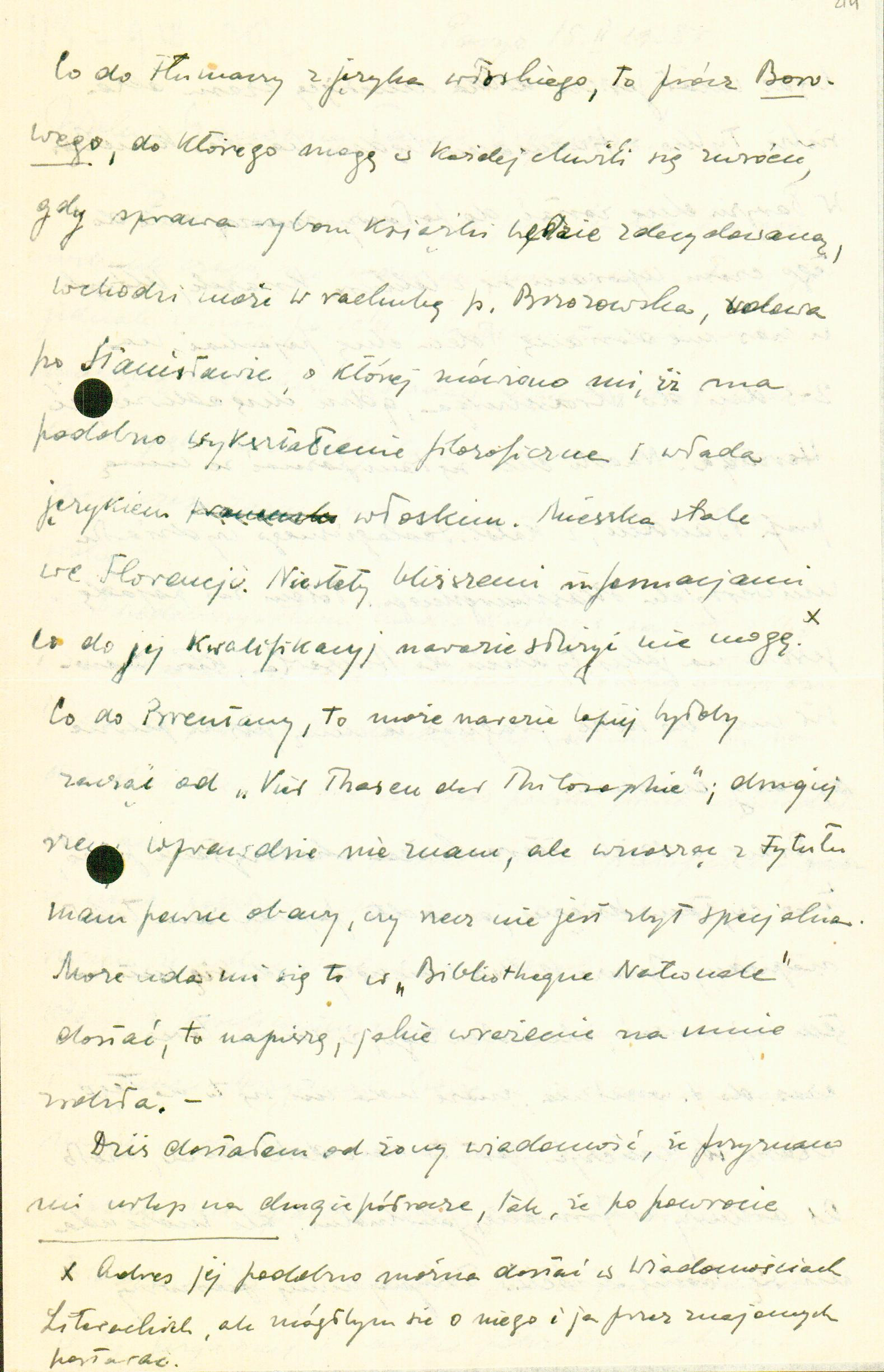 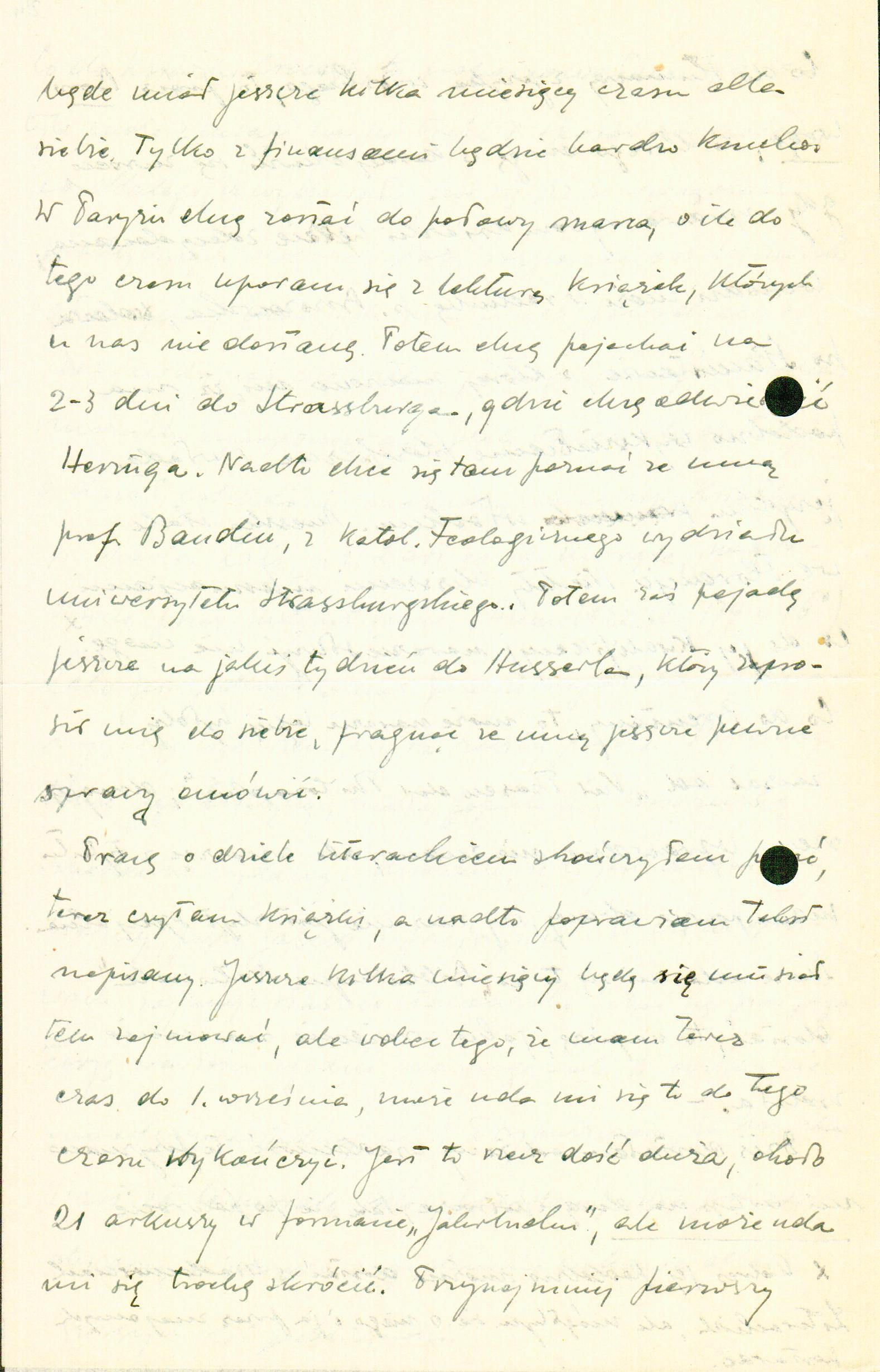 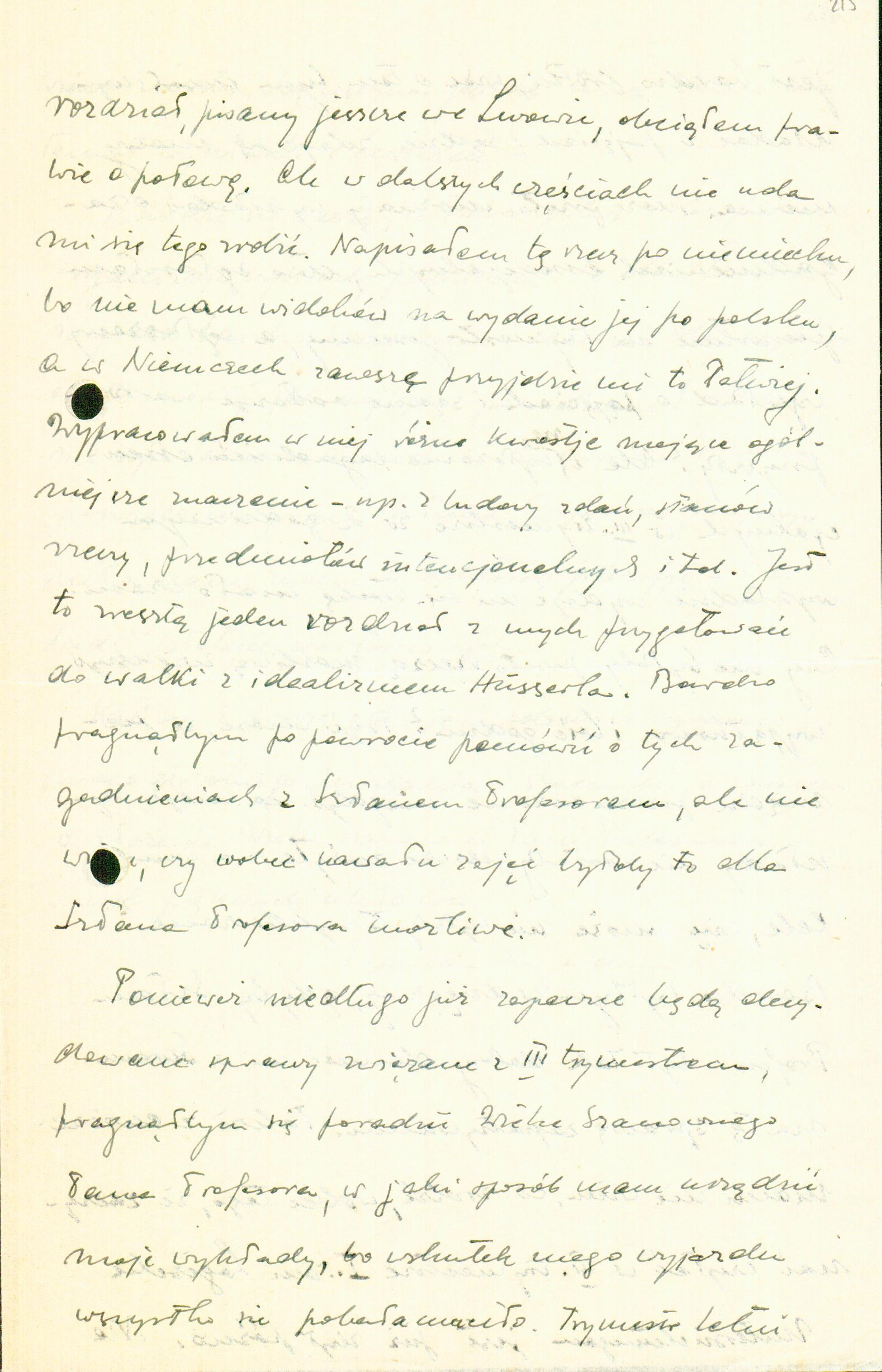 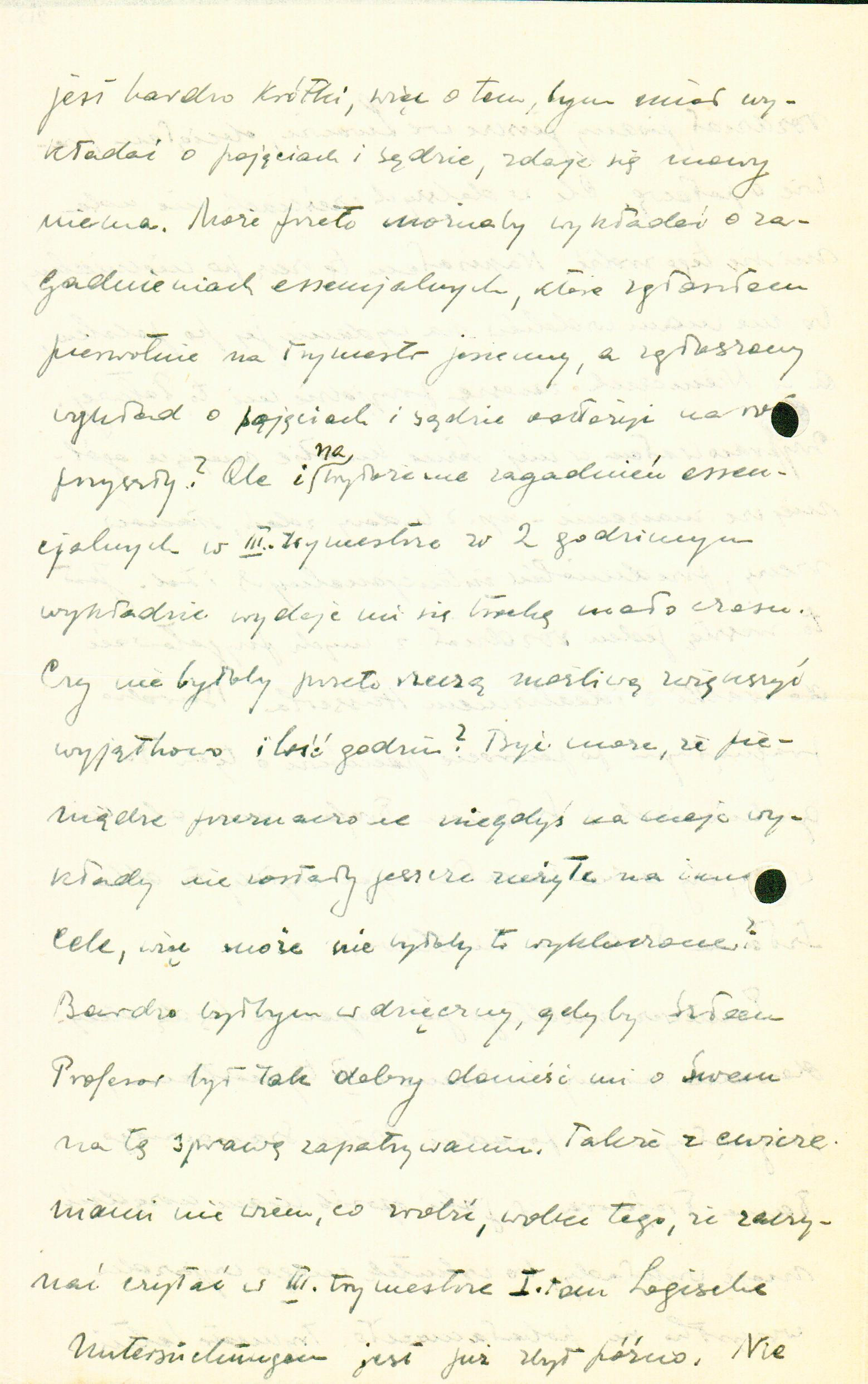 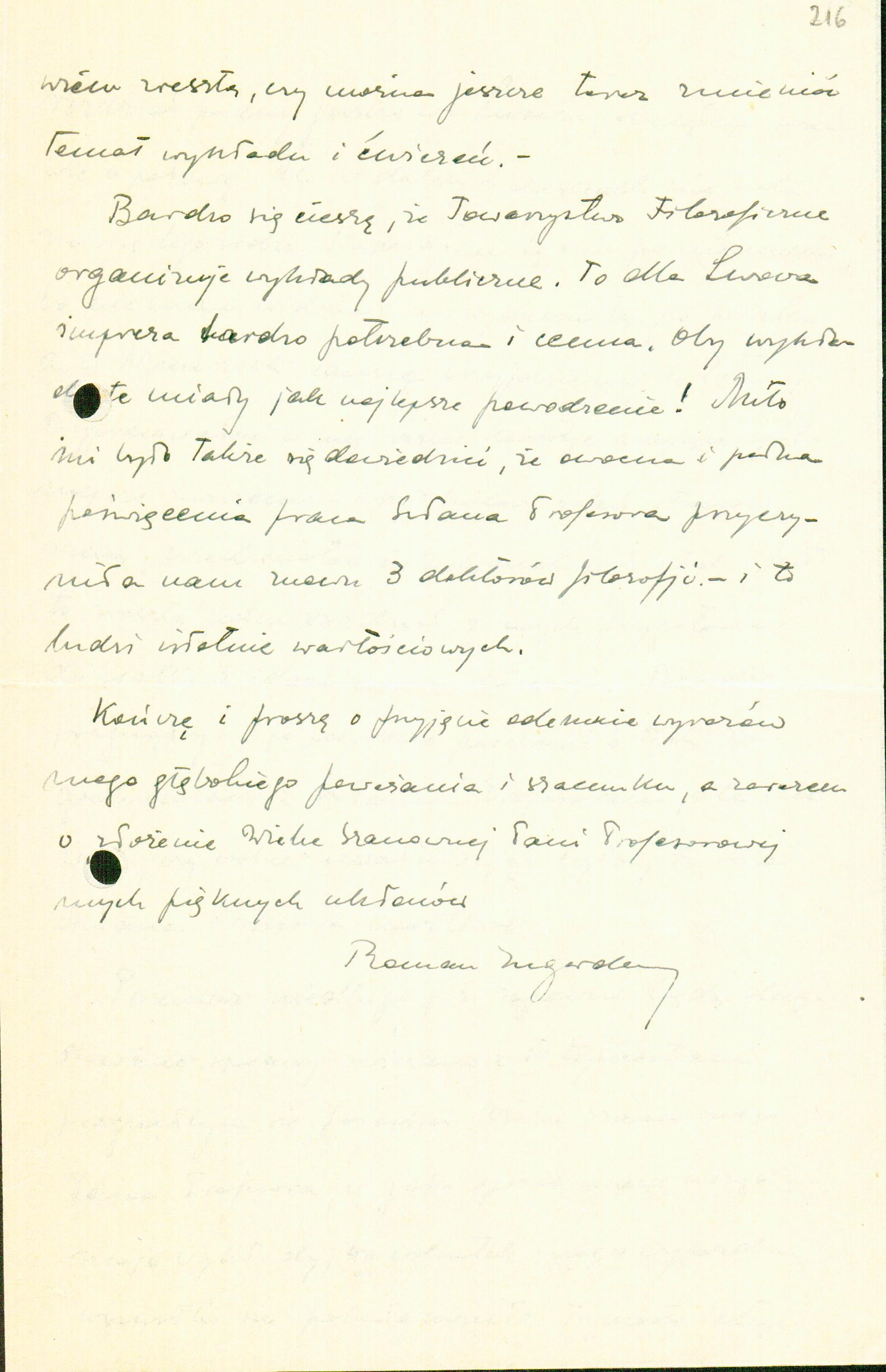 Please forgive me for writing this letter with a pen; as a result, it won’t be very legible. However, I’m writing it after 10 pm and it’s hard for me to disturb my neighbours at this time of night with the typewriter. I spend almost the whole day in the library now, most likely, then, a great deal of time would pass before I’d find a free hour during the day.

First of all, I thank you very much for your letter of 11/2 and for the news provided therein. Personally, I’m sorry that the attempt with Ossolineum didn’t come off, because I very much wanted some Polish publishing firm to begin publishing Polish philosophical books; maybe others would then follow suit. But I understand that, given relations with Ossolineum, negotiations would have to be very troublesome and would ultimately turn ugly. At the same time, I’m glad that the idea itself of publishing translations from contemporary philosophy hasn’t fallen through. I fervently wish the Philosophical Society complete success in this useful and badly needed campaign! As for Croce’s book, I suggested it not so much for its content or style of writing as for the fact that it seemed to me that, for practical reasons, it’d be a good idea to start with famous names that are likely to prove successful in Poland. Really, I don’t know of any other Italian to suggest. If, indeed, it was a question of a work on aesthetics, it would be possible to take e.g. a book by M. Charles Lalo [O1] entitled L’art et la morale [Art and morals], which was awarded a prize by the French Institute [O2] (Alcan[O3]  1922, 179 pages w 16°[O4] ). Lalo, however, is almost completely unknown in Poland, so I don’t know whether this thing would work. Also possible would be his Aesthetics[O5] , a small popular book published recently. I regard him as a serious author; he writes clearly and transparently, and takes a correct position on many issues (even though I can’t accept his theory of values ‒ but this, obviously, plays no role). I don’t suppose the book L’art et la morale (which I own) is overly long; at the same time it raises a question of interest to wider audiences.

As for translators from Italian, apart from Borowy[O6] , to whom it’s possible to turn at any time, when the issue of choosing a book will have been decided, Ms Brzozowska[O7] , Stanisław[O8] ’s widow ‒ who, I’ve been told, had a philosophical education and speaks Italian ‒ may enter the equation. She makes her permanent home in Florence. Unfortunately at the moment I can’t give you any more detailed information concerning her qualifications. Evidently you can find her address in Wiadomości Literackie [Literary news], but I could try to get it through my acquaintances. As for Brentano, perhaps as of now it would be better to start with Vier Phasen der Philosophie [The four phases of philosophy]; I’m admittedly not familiar with the other thing, but, judging by the title, I have some concerns as to whether it isn’t too specialised. Maybe I’ll manage to get it at the Bibliothèque Nationale [French: National Library]; I’ll write as to what impression it’s made on me. ‒

Today I got the news from my wife that I’d been granted leave for the second semester, so that following my return I’ll still have a few months for myself. It’s just that it’ll be very precarious financially. I want to stay in Paris until the middle of March, assuming by then I can read the books which I can’t get in Poland. Then I want to go for 2 or 3 days to Strassburg [Strasbourg], where I want to visit Hering[O9] . What is more, Prof. Baudin[O10] , from the faculty of Catholic theology at the University of Strassburg [University of Strasbourg], wants to meet me. Then I’ll go for about another week to see Husserl, who invited me to visit him, wishing to discuss certain issues with me.

I’ve finished writing the paper on the literary work; now I’m reading books, and also correcting the written text. I’ll have to occupy myself with this for a few months yet, but since I now have time until 1 September, perhaps I’ll manage to finish it by then. It’s quite an extensive thing, about 21 arkuszy[O11]  in the [Philosophical] Yearbook format, but I may manage to shorten it a bit. At least I’ve cut the first chapter, written when I was still in Lviv, almost by half. But in the subsequent parts I won’t manage to do that. I’ve written the thing in German, because I’ve got no prospects of publishing it in Polish, whereas in Germany it’s always easier for me. In it, I’ve elaborated various questions of general significance – e.g. regarding the construction of sentences, states of affairs, intentional objects, etc. Furthermore, it’s one chapter from my preparations for the fight against Husserl’s idealism. I’d very much like to talk to you about these issues after returning, but I don’t know, given your overload of classes, whether that’ll be possible for you.

Because matters associated with the third trimester will probably be decided soon, I’d like to consult with you as to how I’m supposed to arrange my lectures, since, as a result of my trip, everything was left at sixes and sevens. The summer trimester is very short, so there seems to be no question of my being supposed to lecture on concepts and judgments. Perhaps, therefore, it would be possible to lecture on essential questions, as I originally announced for the autumn trimester, and postpone the announced lecture on concepts and judgments until next year. But two hour-long lectures in the third trimester also seems too short a time to expound essential questions. Wouldn’t it be possible, then, as an exception, to expand the number of hours? Possibly the money once allocated to my lectures hasn’t yet been exhausted for other purposes, so perhaps it wouldn’t be out of the question. I’d be very grateful if you’d be so good as to inform me of your views in this matter. I don’t know what to do about the exercises, either, given that it’s already too late to begin reading the first volume of Logische Untersuchungen [Logical investigations] in the third trimester. In any case, I don’t know whether the topic of the lecture and exercises can still be changed.

I’m very glad that the Philosophy Society is organising public lectures. For Lviv, this is a very necessary and valuable event. May these lectures enjoy the greatest success! It was also nice to learn that your fruitful and completely devoted work has given us three more doctors of philosophy ‒ and truly valuable people at that.

In closing, I ask you to accept expressions of my profound esteem and respect, and at the same time to give my best regards to your wife