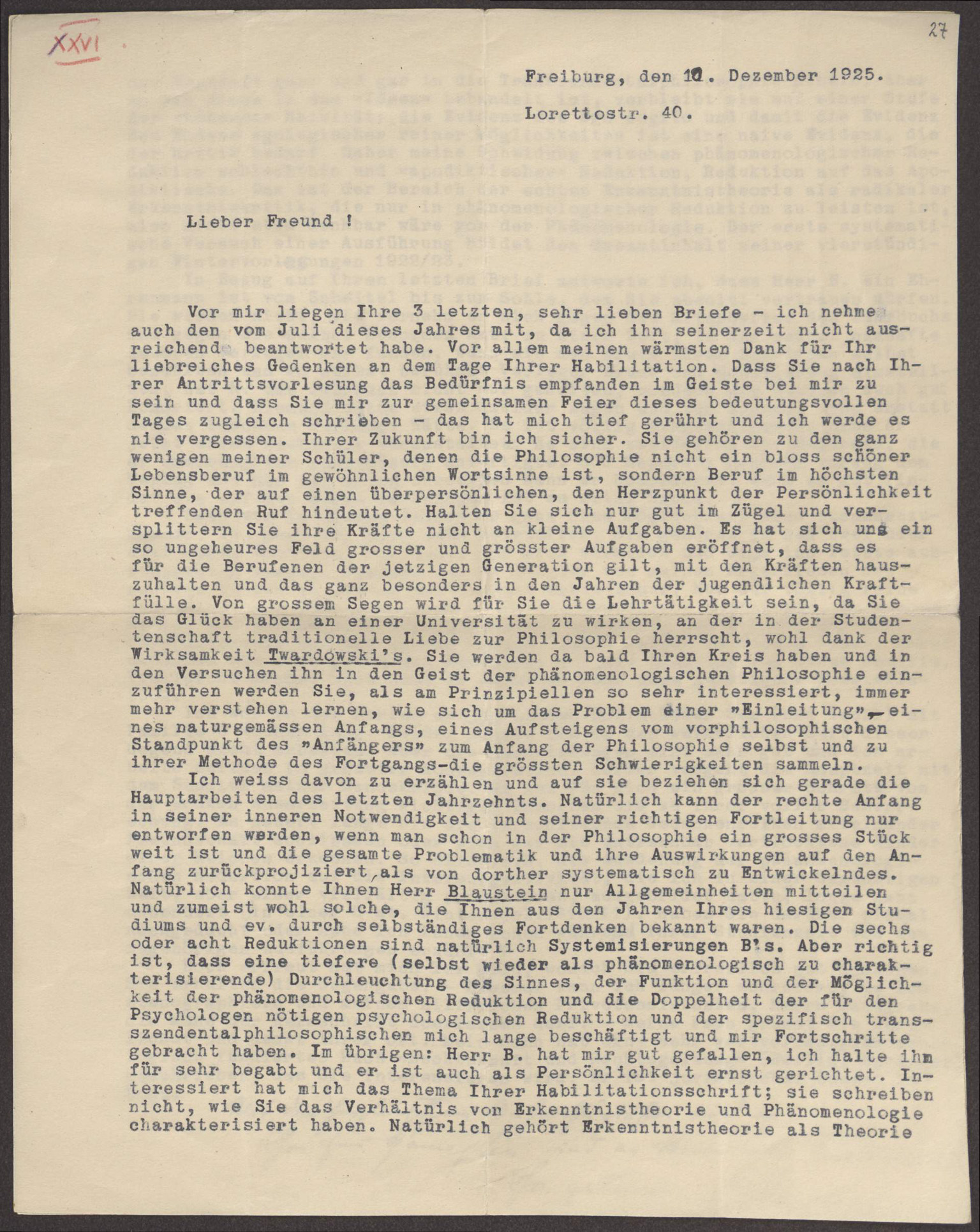 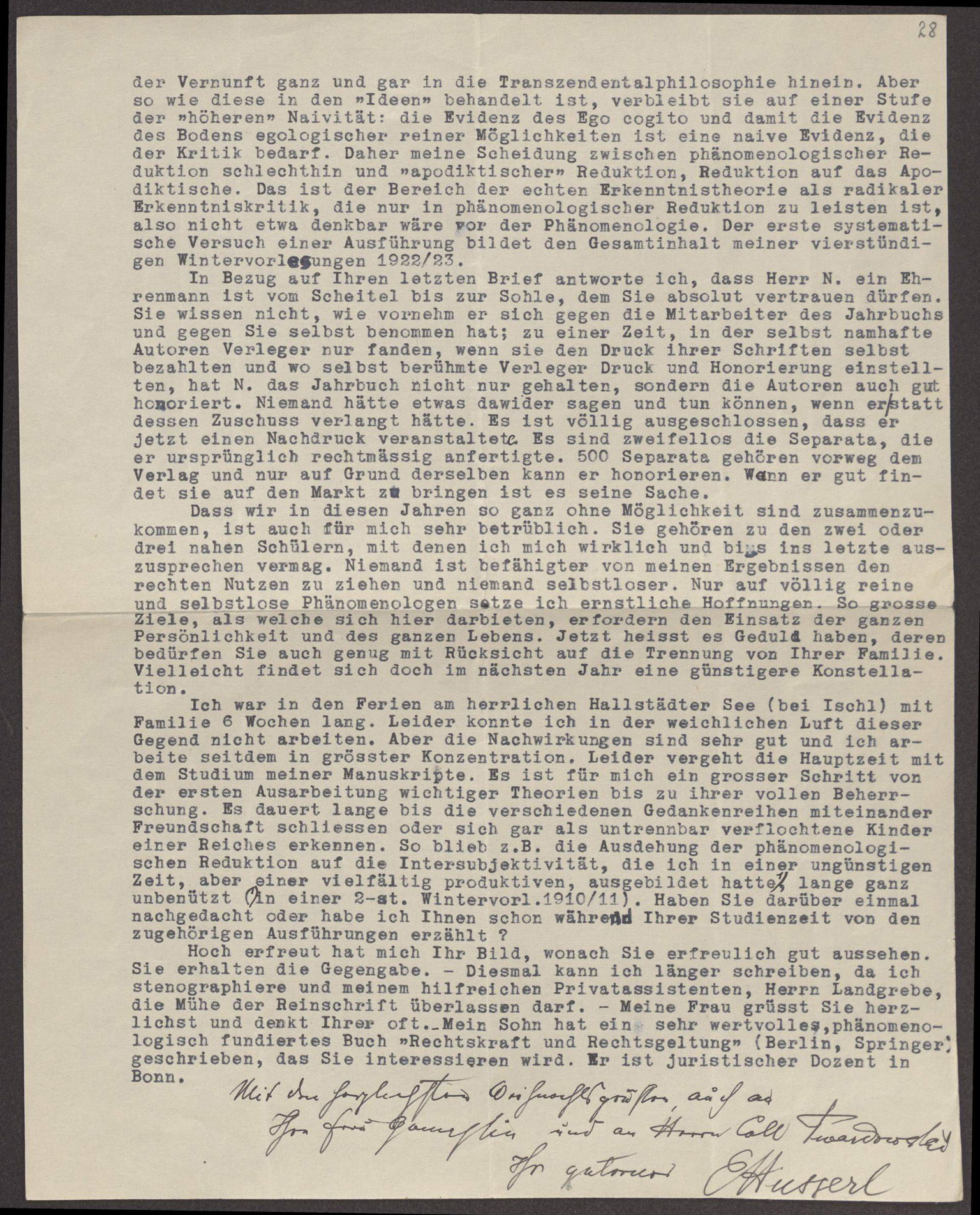 In front of me are the last three of your very kind letters – this includes your letter from July of this year, since I did not adequately reply to your letter at the time. Above all, my warmest thanks for your kind commemoration on the day of your habilitation. The fact that, after your inaugural lecture, you felt the need to be with me in spirit, and that you wrote to me on the same day to celebrate this significant day with me, touched me deeply and I will never forget. I am sure that you have a successful future ahead of you. You are one of the very few students of mine for whom philosophy is not a mere occupation in the ordinary sense of the word, but a vocation in the highest sense, pointing to a transpersonal vocation you have been called to. Just stay disciplined and do not waste your energy on minute tasks. We are looking upon a tremendous field of great and greatest tasks that the ones of this generation who have been called to the field have to pace themselves, especially in the years of youthful vigor. It will be a great blessing for you to become a teacher because you are fortunate enough to work at a university where there is a traditional love for philosophy in the student body, probably due to the efficacy of Twardowski. You will soon have your circle there, and in the attempts to introduce this circle of students into the spirit of phenomenological philosophy, you will encounter how difficult it is, especially since you are tremendously interested in the fundamental, to deal with the problem of an “introduction” as in a natural beginning, an ascent from the pre-philosophical point of view of the “beginner” to the beginning of philosophy itself and to its method of progress.

I know a little bit about it, and it has been my focus during the last decade of my work. Of course, the right beginning, in its internal necessity and proper direction, can only be designed if one has already come a long way regarding philosophy and one can project the entire problematic and its effects back to the beginning as something that is to be developed systematically from there on forward. Of course, Mr. Blaustein could only tell you about generalities, and most likely those that you are familiar with from the years of your local studies and possibly through independent thinking. Of course, the six or eight reductions are systemizations by B[laustein]. But it is true that a deeper examination of the meaning, function, and possibility of the phenomenological reduction (and again to be characterized as phenomenological) and the duplication of the psychological reduction and the specifically transcendental-philosophical necessary for the psychologist have long occupied me and helped me make progress. By the way, I liked Mr. B[laustein] and I think he’s a very talented earnest person. I was interested in the topic of your habilitation thesis.31 You did not write how you characterized the relationship between epistemology and phenomenology. Of course, epistemology, as a theory of reason, is entirely rooted in transcendental philosophy. But as it is treated in Ideas, it remains on a level of “higher” naivety: the evidence of the ego cogito, and thus the evidence of the ground for egologically pure possibilities is a naive evidence that deserves criticism. Hence, I separate phenomenological reduction per se and “apodictic” reduction, reduction to the apodictic. This is the domain of true epistemology as a radical critique of knowledge, which can only be achieved in phenomenological reduction; that is, it is not conceivable before phenomenology. The content of my four-hour winter lectures of 1922/23 forms the first systematic attempt at execution.

Regarding your last letter, my reply is that Mr. N[iemeyer] is a man of honor from head to toe. You can absolutely trust him. You have no idea how nobly he behaved with regard to the Yearbook staff and you; at a time when even well-known authors were only able to work with publishers, when they paid the price of printing their own writings, and where even famous publishers stopped printing and refused to pay royalties, N[iemeyer] not only kept the Yearbook, but also paid the authors well. Nobody could have said anything or been able to do something about it if he had asked for financial contributions. It is completely out of the question that he was printing reproductions. It is undoubtedly the separata that he originally and lawfully produced. Initially, 500 separata belong to the publisher, and he can only pay royalties after selling those. If he thinks it is a good idea to publish them, he may do so.

It is very sad for me, too, that we have been unable to get together over the years. You are one of the two or three close students of mine with whom I feel completely comfortable to express myself. No one is more capable of properly profiting from my achievements, and no one is more selfless. I only have great hopes for completely serious and unselfish phenomenologists. Goals as great as those that are presented to us at this point require a deep commitment throughout one’s whole life. Now it is time to be patient, and you will need it, especially in view of being separated from your family. Perhaps a more favorable constellation can be worked out next year.

I vacationed at the beautiful Lake Hallstädter See (near Ischl) together with my family for six weeks. Unfortunately, I was unable to work due to the soft air in the area. However, the after effects are quite positive, and I have been able to concentrate very well ever since. Unfortunately, I spend most of my time reviewing my manuscripts. For me, it is a big step from the first conceptual design of important theories to their full mastery. It takes a long time for the various lines of thought to become “friends” with each other or even recognize themselves as inseparably intertwined children of an empire. Thus, for example, I did not utilize the expansion of phenomenological reduction to intersubjectivity, which I had developed during an inopportune time, albeit I was multifariously productive, for a two-hour winter lecture in 1910/11, for a long time.32 Have you ever thought about it or did I tell you about the related explanations during your studies?

I was very glad to receive your picture in which you look pleasingly well. I am sending you mine in return. This time I can write more because I am writing shorthand and my helpful personal assistant, Mr. Landgrebe, will produce a clean copy. My wife sends her sincerest regards. She thinks of you frequently. My son has written a very valuable book based on phenomenology entitled “Rechtskraft und Rechtsgeltung” [Legal Force and Legal Validity] (Berlin, Springer), which will interest you. He is an assistant professor of law in Bonn.

Please send my warmest greetings to your wife and to my colleague, Mr. Twardowski.