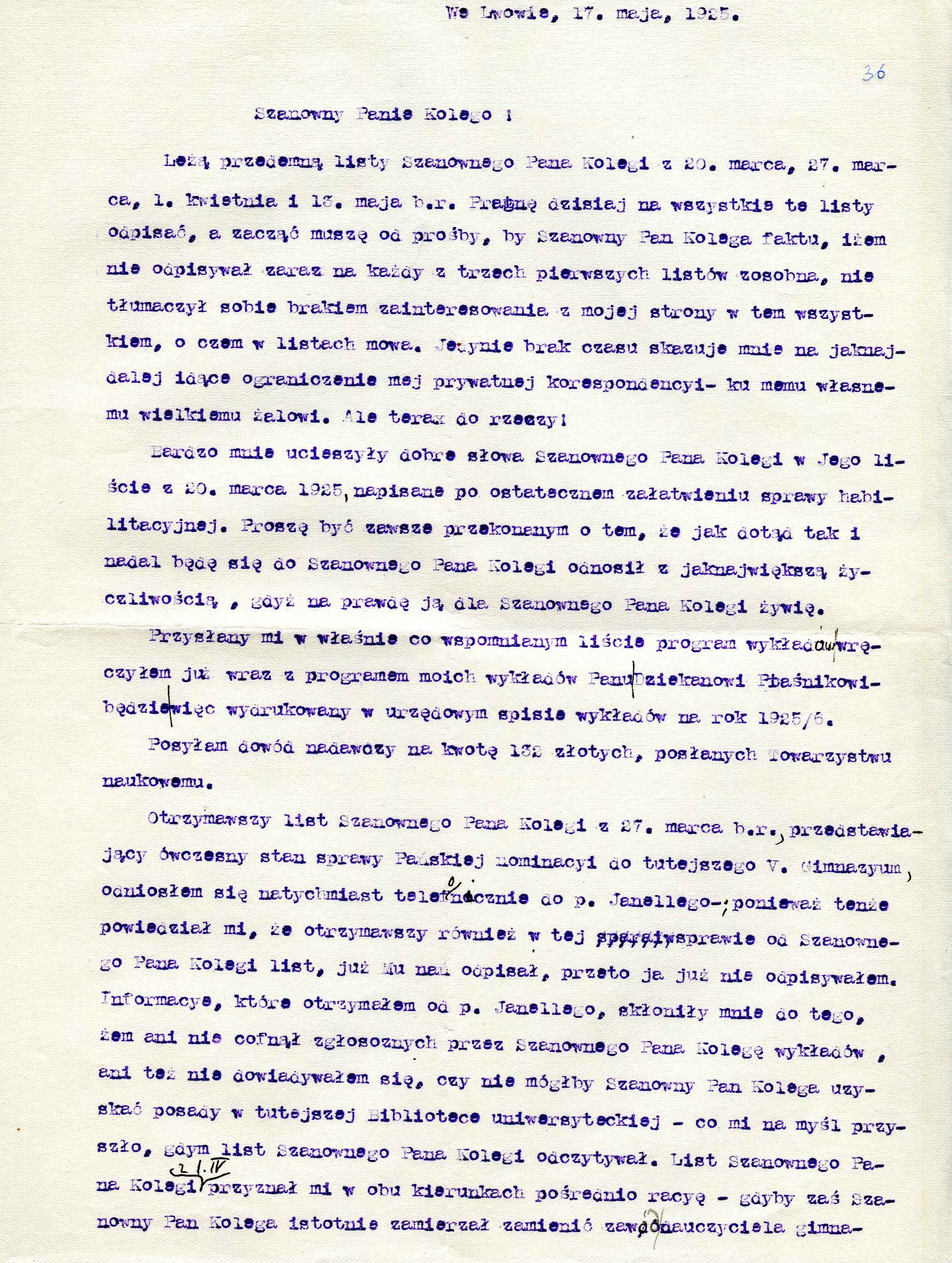 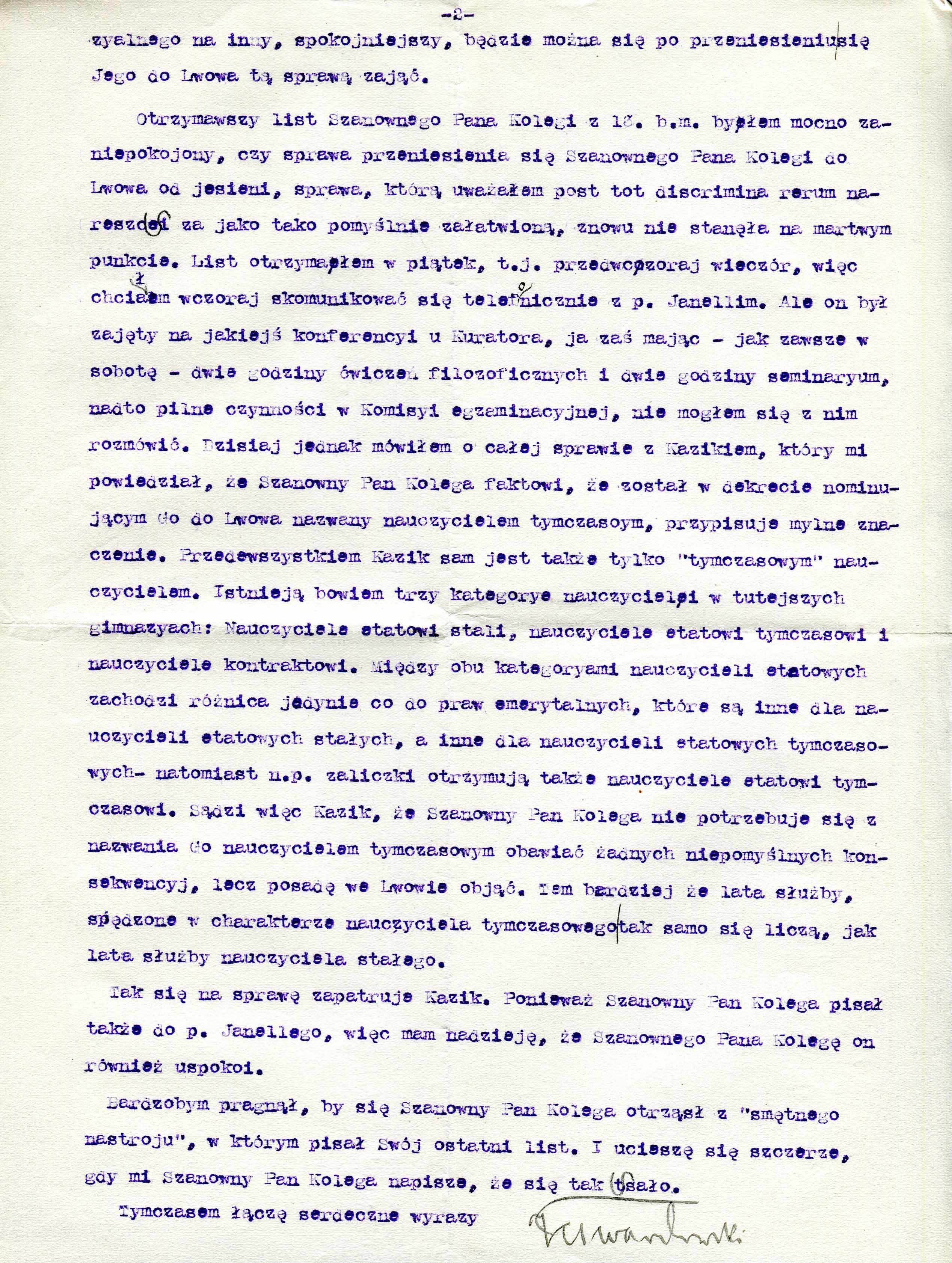 Before me I have your letters of 20 and 27 March, 1 April, and 13 May of this year. I want to answer all of these letters today, but I have to begin with a request: that you don’t attribute the fact that I didn’t reply at once to the first three letters individually to any lack of interest on my part in everything that is discussed in those letters. Only a lack of time condemns me to the greatest possible restriction of my private correspondence – to my own great sorrow. But now, to the point!

I was extremely pleased at your kind words in your letter of 20 March 1925, written after the final settlement of your habilitation. Please be sure, always, that I have treated and will continue to treat you with the greatest possible kindness, which I truly feel towards you.

I’m sending proof of payment of the 132 zlotys sent to the scientific Society.

Having received your letter of the 27th of March of this year, presenting the status (at that moment) of the matter of your appointment to the local middle school no. 5, I immediately telephoned Mr Janelli – ; because he told me that, having also received a letter from you in this matter, he had already written back to you, I offered no further response. The information I received from Mr Janelli persuaded me not to withdraw the lectures you had announced; nor did I find out whether or not you might obtain a position at the local university Library – which had come to mind when I read your letter. Your letter of 1/4 indirectly proved me right in both respects – however, if you really intended to change your profession of middle-school teacher for a different and quieter one, you’ll be able to look into that matter following your relocation to Lviv.

Upon receiving your letter of the 13th of this month, I was very disturbed as to whether the matter of your relocation to Lviv as of the autumn – a matter which I considered post tot discrimina rerum [Latin: after so many crises] as finally being more or less favourably settled ‒ had again come to a standstill. I received the letter on Friday, i.e. the evening of the day before yesterday, thus I intended to communicate yesterday by phone with Mr Janelli. But he was occupied at some kind of conference at the Superintendent’s, whereas I, as always on Saturday, having two hours of philosophical exercises and two of seminars, and, on top of that, urgent tasks for the examining Committee, wasn’t able to speak to him. Today, however, I was talking over the whole matter with Kazik, who told me that you’ve ascribed an erroneous significance to the fact that you were referred to as a temporary teacher in the document appointing you to the post in Lviv. First of all, Kazik himself is also only a ‘temporary’ teacher. There are, in fact, three categories of teachers in the local middle schools: full-time permanent, full-time temporary, and contract. Between the two categories of full-time teachers there’s a difference in terms of pension rights only; some apply to permanent full-time teachers and others to temporary full-time teachers; on the other hand, e.g. advances are also given to temporary teachers. Kazik thinks, therefore, that you don’t need to fear any unfavourable consequences of being designated a temporary teacher, but that you should accept the position in Lviv. All the more so because years of service spent as a temporary teacher count just the same as those spent as a permanent teacher.

That’s Kazik’s view of the matter. Since you also wrote to Mr Janelli, I hope that he, too, will assuage your fears.

I’d very much wish for you to shake off this ‘dismal mood’ of which you wrote in your last letter, and I’ll be sincerely glad when you write me that you’ve done so.

Letter to the Committee of the Library of Classics of Philosophy written 26.08.1952