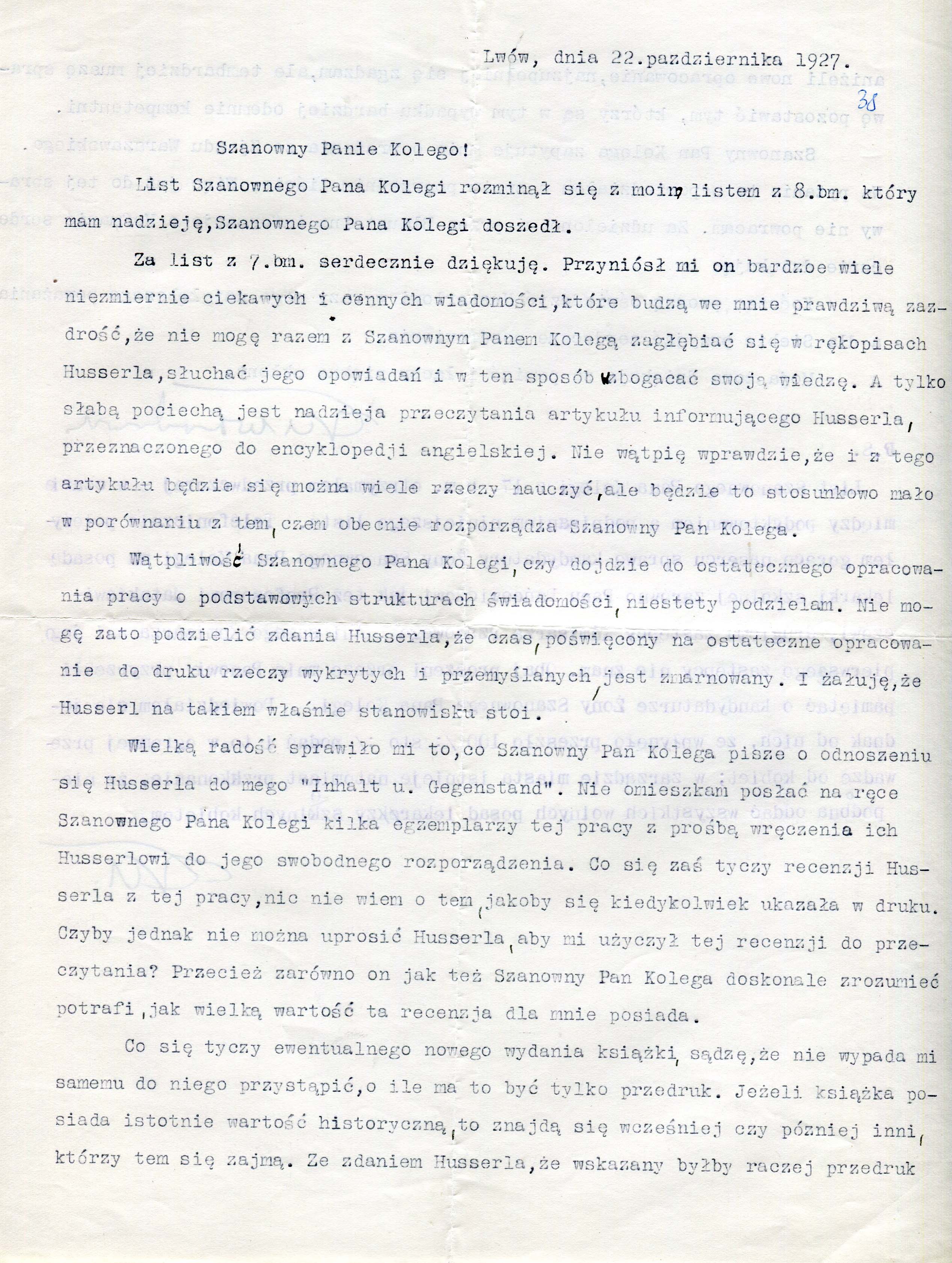 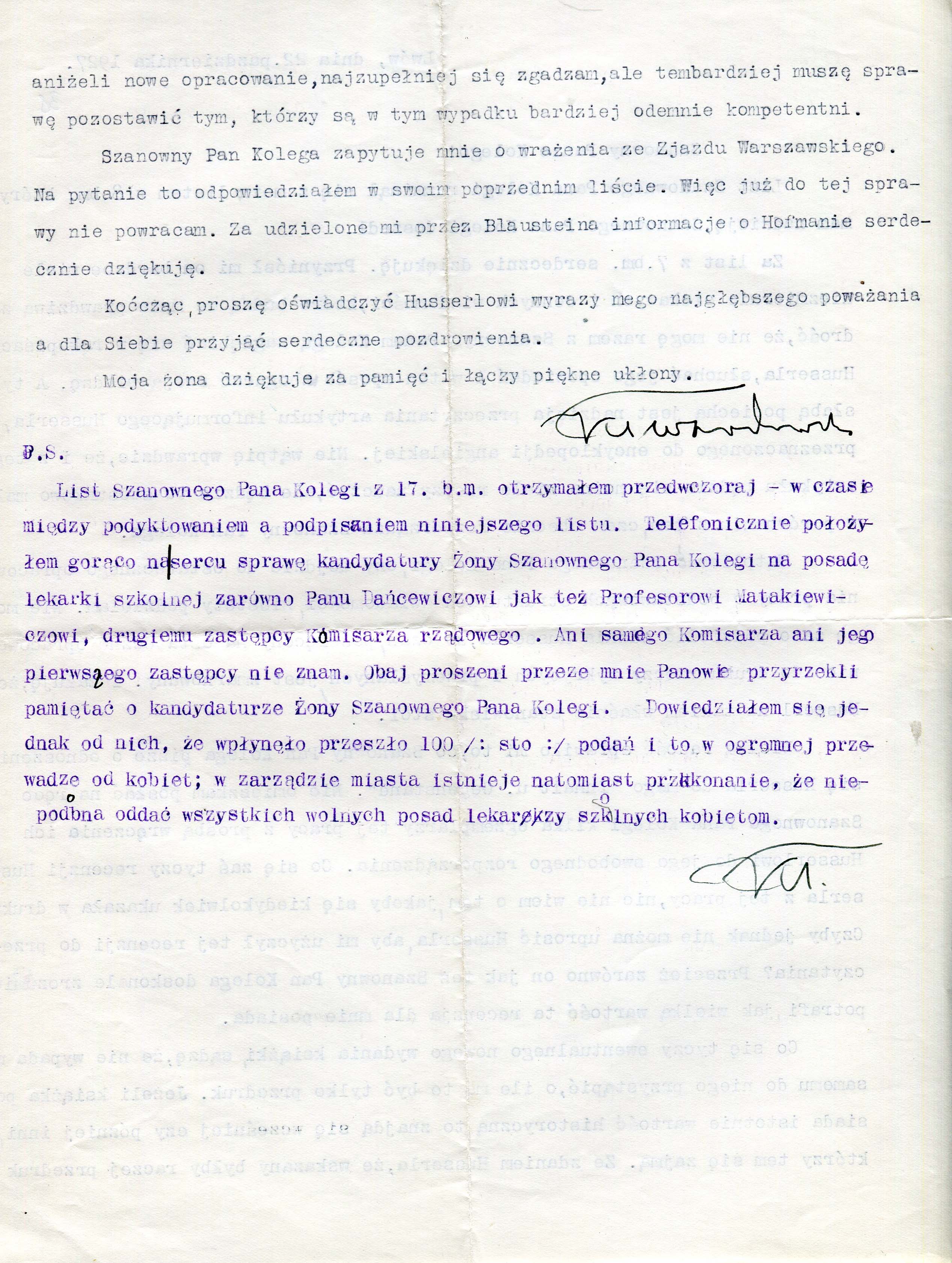 Your letter crossed mine of the 8th of this month, which I hope has reached you, in the post.

I cordially thank you for your letter of the 7th of this month, which brought me a great deal of extremely interesting and valuable news, awakening real envy in me for not being able to delve into Husserl’s manuscripts, listen to his stories, and so enrich my knowledge along with you. The hope of reading Husserl’s informational article intended for the English encyclopaedia is but a weak consolation. While I have no doubt that it’ll be possible to learn many things from this article, this will be relatively little compared to what you currently have at your disposal.

Unfortunately, I share your doubts as to whether the paper concerning the basic structures of consciousness will be ultimately elaborated. Moreover, I can’t share Husserl’s opinion that the time devoted to final elaboration for the publication of things that have been discovered and deliberated on is time wasted. And I regret that Husserl has taken just such a position.

What you write about Husserl’s reference to my Inhalt u. [und] Gegenstand has given me great joy. I won’t fail to send you several copies of this paper with a request to give them to Husserl to freely dispose of. As for Husserl’s review of this paper, I know nothing as to whether it ever appeared in print. Wouldn’t it be possible, though, to ask Husserl to lend me this review to read? After all, both he and you can understand perfectly well what great value this review possesses for me.

As for a potential new edition of the book, I don’t think it is for me to proceed in this matter myself, if it’s going to be just a reprint. If the book possesses significant historical value, sooner or later others will be found to see to it. I completely agree with Husserl’s opinion – that a reprint would be preferable to a new elaboration – but in that case, it’s all the more imperative for me to leave the matter to those more competent than myself.

You ask me about my impressions of the Warsaw Congress. I answered this question in my previous letter, so I won’t return to this matter now. I cordially thank you for the information about Hofman given to me through Blaustein[O1] .

In closing, please pass expressions of my most profound esteem on to Husserl and accept my cordial greetings for yourself.

My wife thanks you for remembering her and sends her best regards.

P.S.
I received your letter of the 17th of this month the day before yesterday, in the interval between dictating and signing this letter. I cordially endorsed your wife’s candidacy for the position of school doctor, telephoning Mr Dańcewicz as well as Professor Matakiewicz[O2] , the second deputy government Commissioner; I don’t know either the Commissioner himself or his first deputy. Both gentlemen, at my request, promised to keep your wife’s candidacy in mind. However, I learned from them that over 100 (one hundred) applications had come in, a great majority of them from women; in the city administration, however, there is a conviction that it is impossible to give all vacant positions for school doctors to women.

Letter to the Committee of the Library of Classics of Philosophy written 21.08.1952