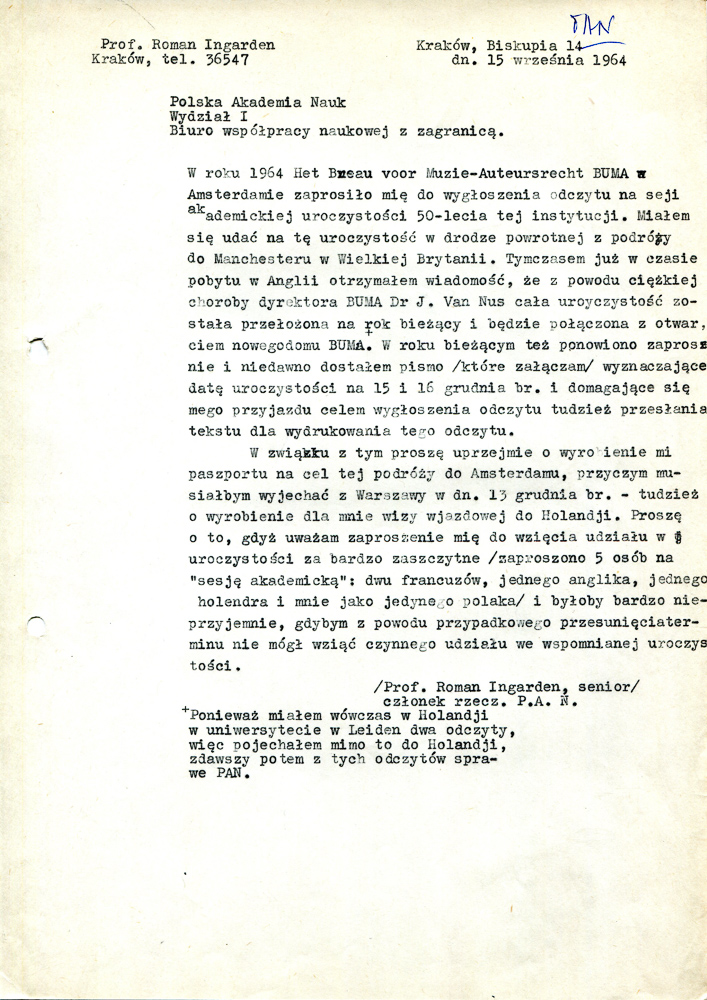 In 1964, Het Breau voor Muzie-Auteursrecht BUMA in Amsterdam invited me to give a lecture at a session for the 50th anniversary of the institution. I was supposed to attend this ceremony on my way back from a trip to Manchester, UK. Meanwhile, during my stay in England, I received the news that due to a serious illness of the BUMA director Dr. J. Van Nus, all celebrations were postponed to this year and will be taking place together with the opening of a new BUMA house. They have also renewed their invitation and I have recently received a letter /which I attach herewith/ setting the date of the ceremony for December 15 and 16 and asking for my presence so I can deliver a lecture or, alternatively, asking me to send in a text of said lecture for printing.
c        c   Therefore, I am writing to ask you to please kindly obtain a passport for me for this trip to Amsterdam – I would have to leave Warsaw on December 13 of this year – and to please get me a visa for the Netherlands. I am asking for this because I consider the invitation to take part in the ceremony a great honor /5 people were invited to the “academic session”: two Frenchmen, one Englishman, one Dutchman and me, as the only Pole/ and it would be very unpleasant if due to an accidental postponement I became unable to actively participate in the ceremony.

Letter to the Committee of the Library of Classics of Philosophy written 15.02.1954