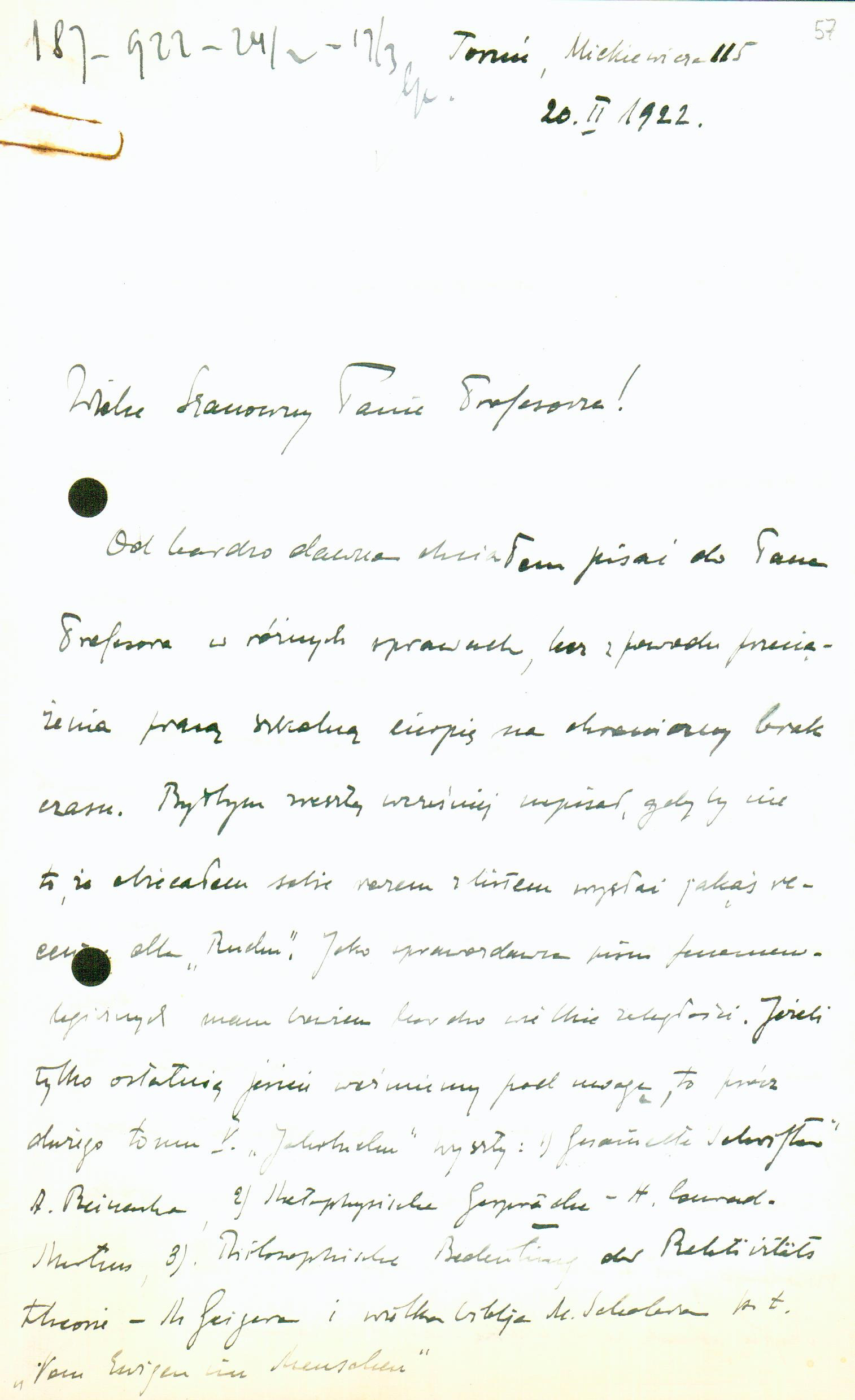 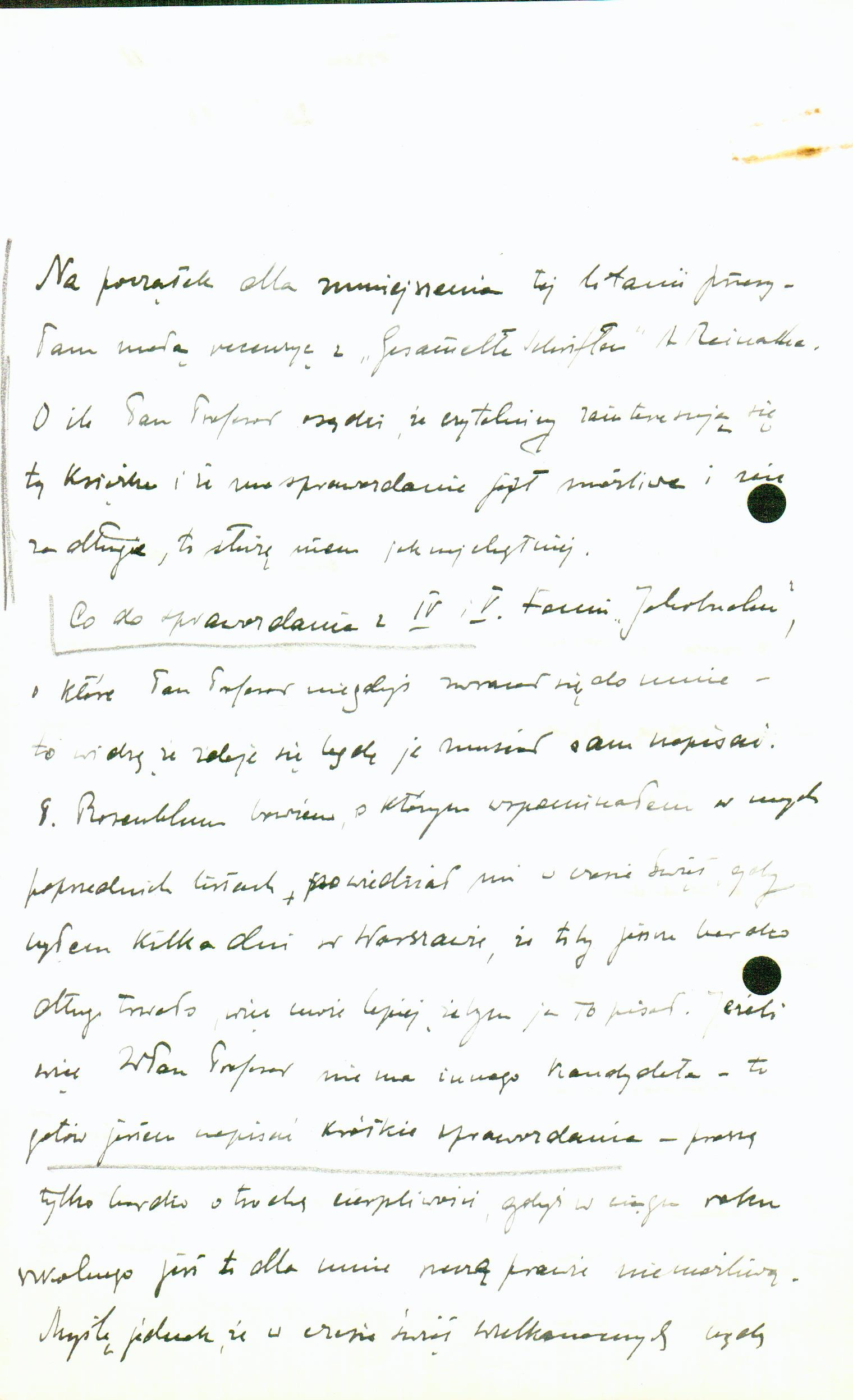 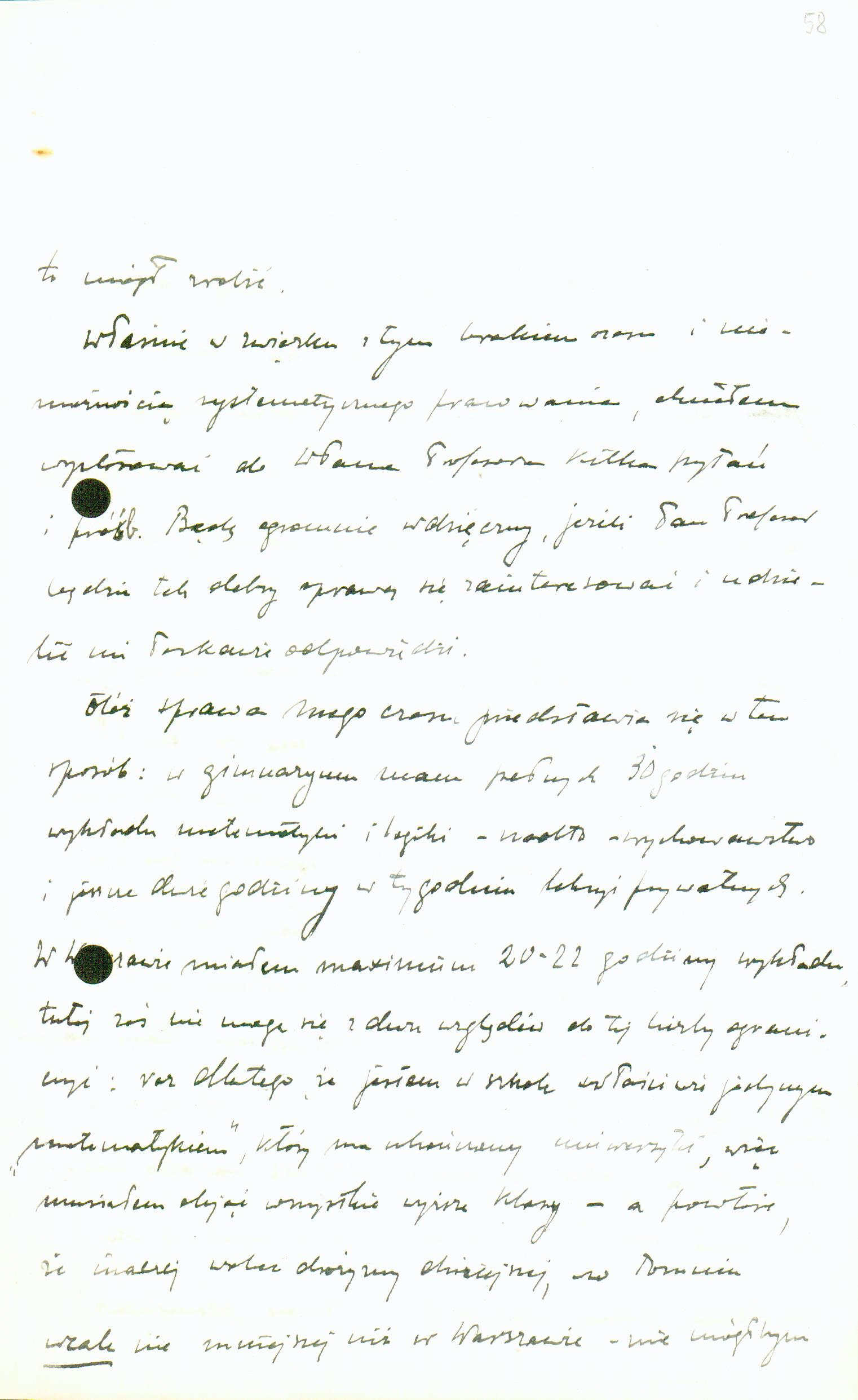 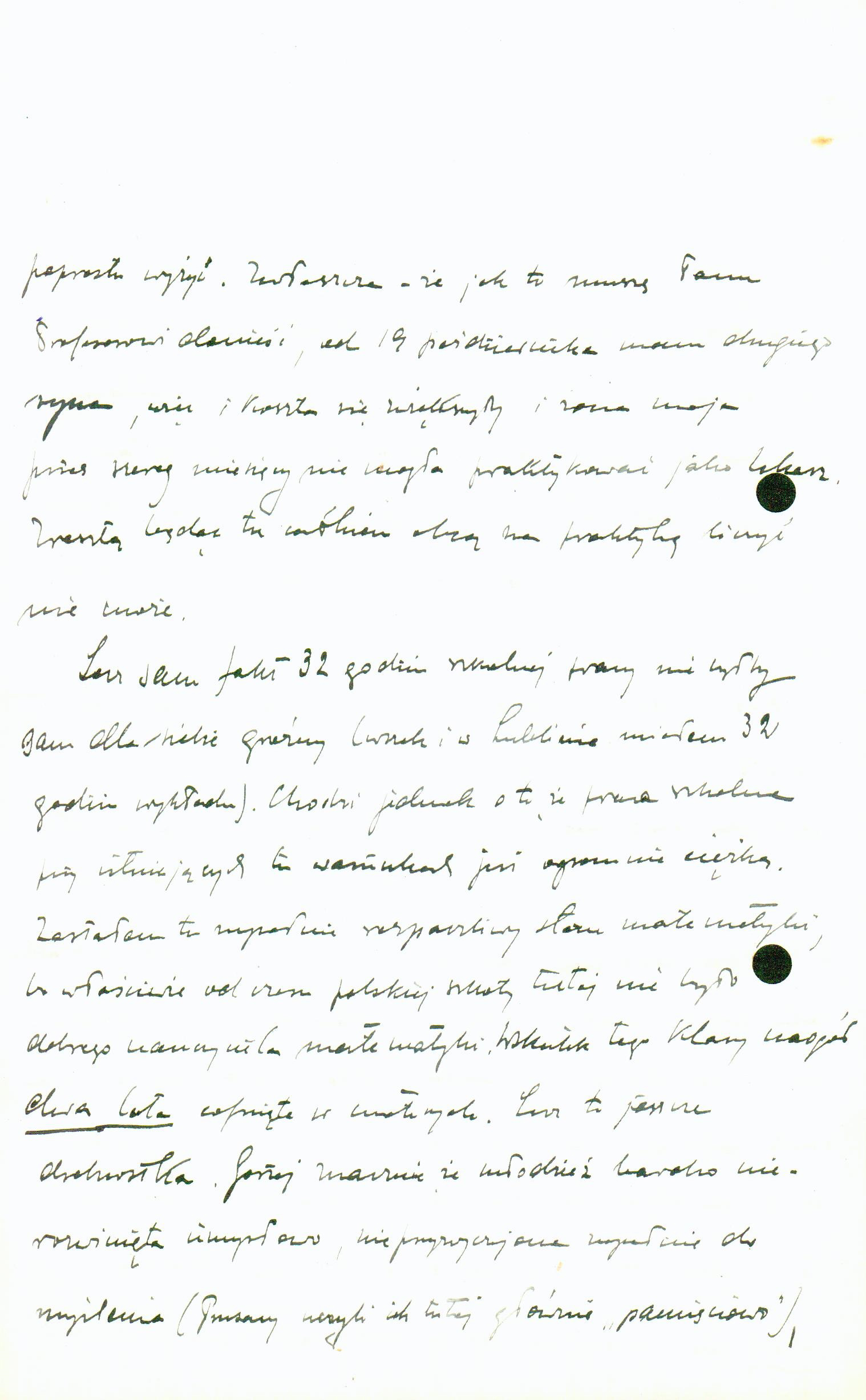 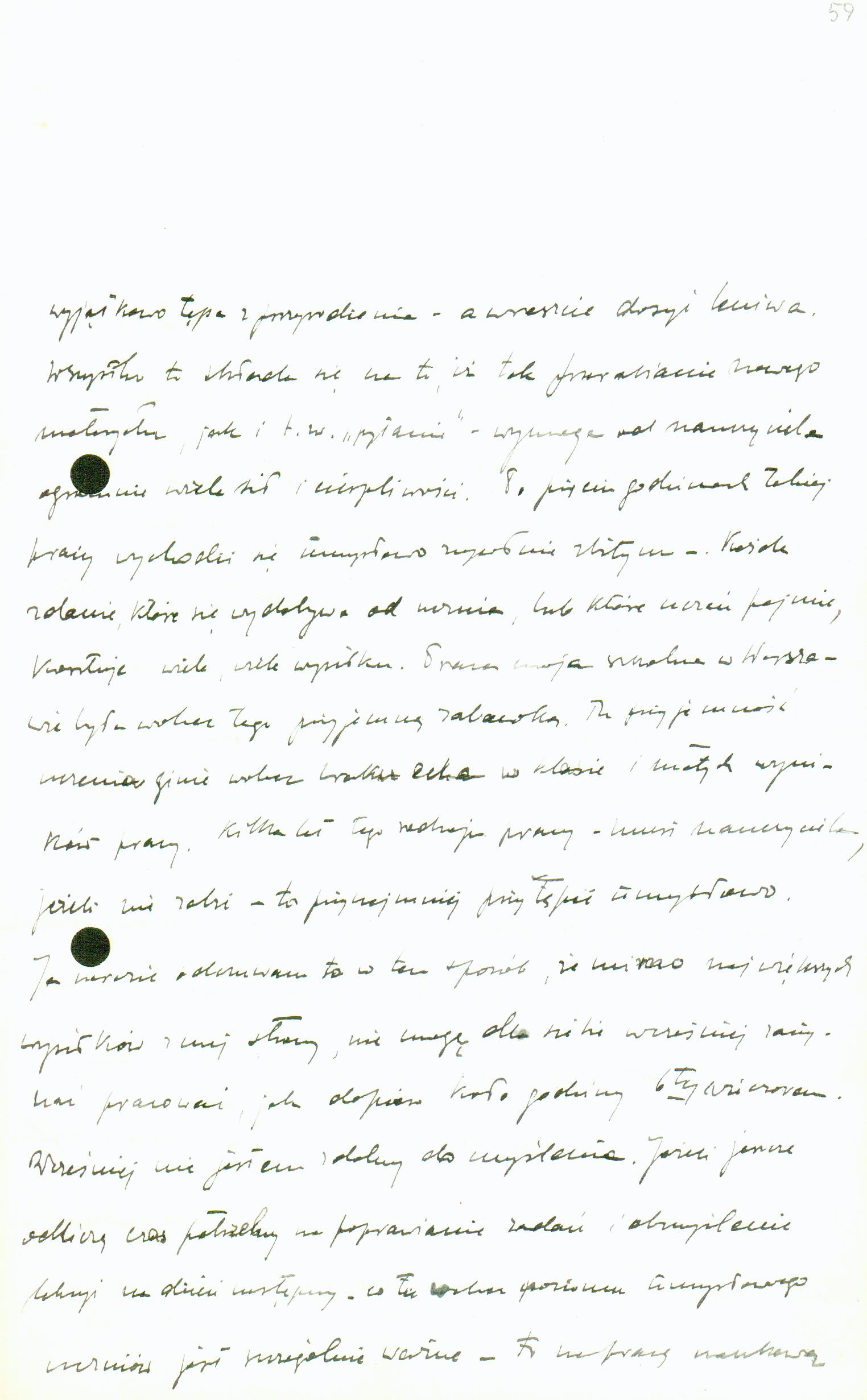 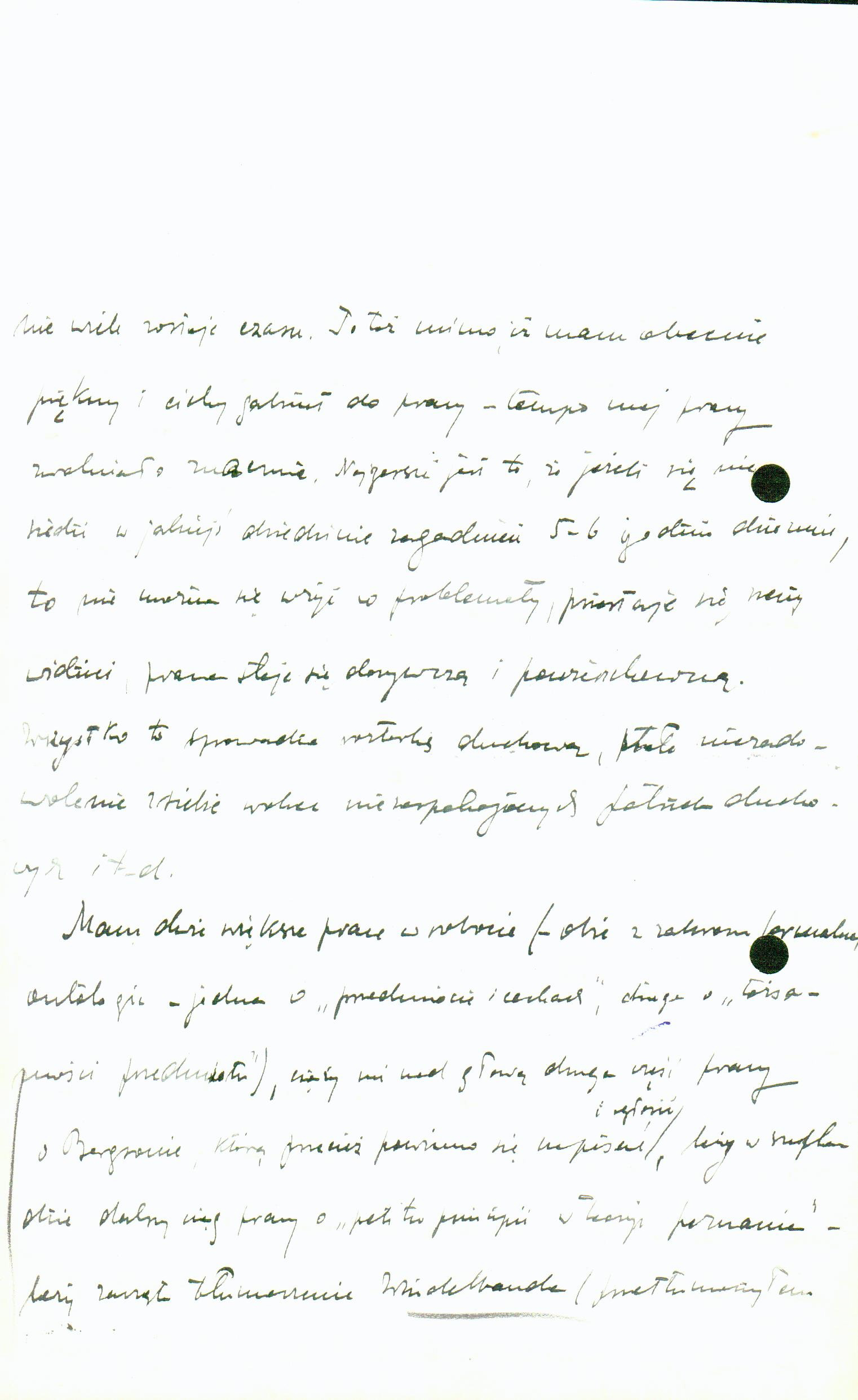 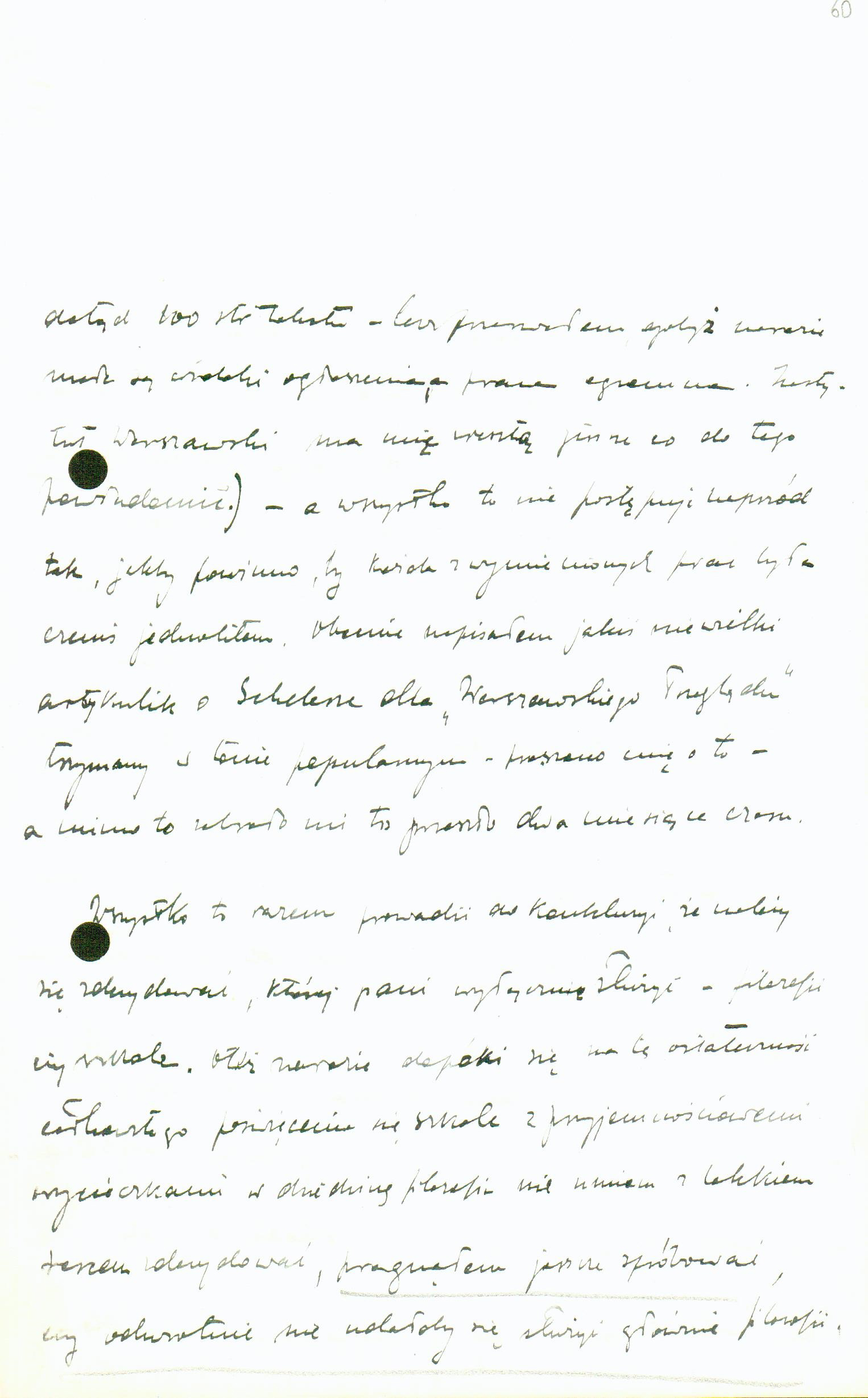 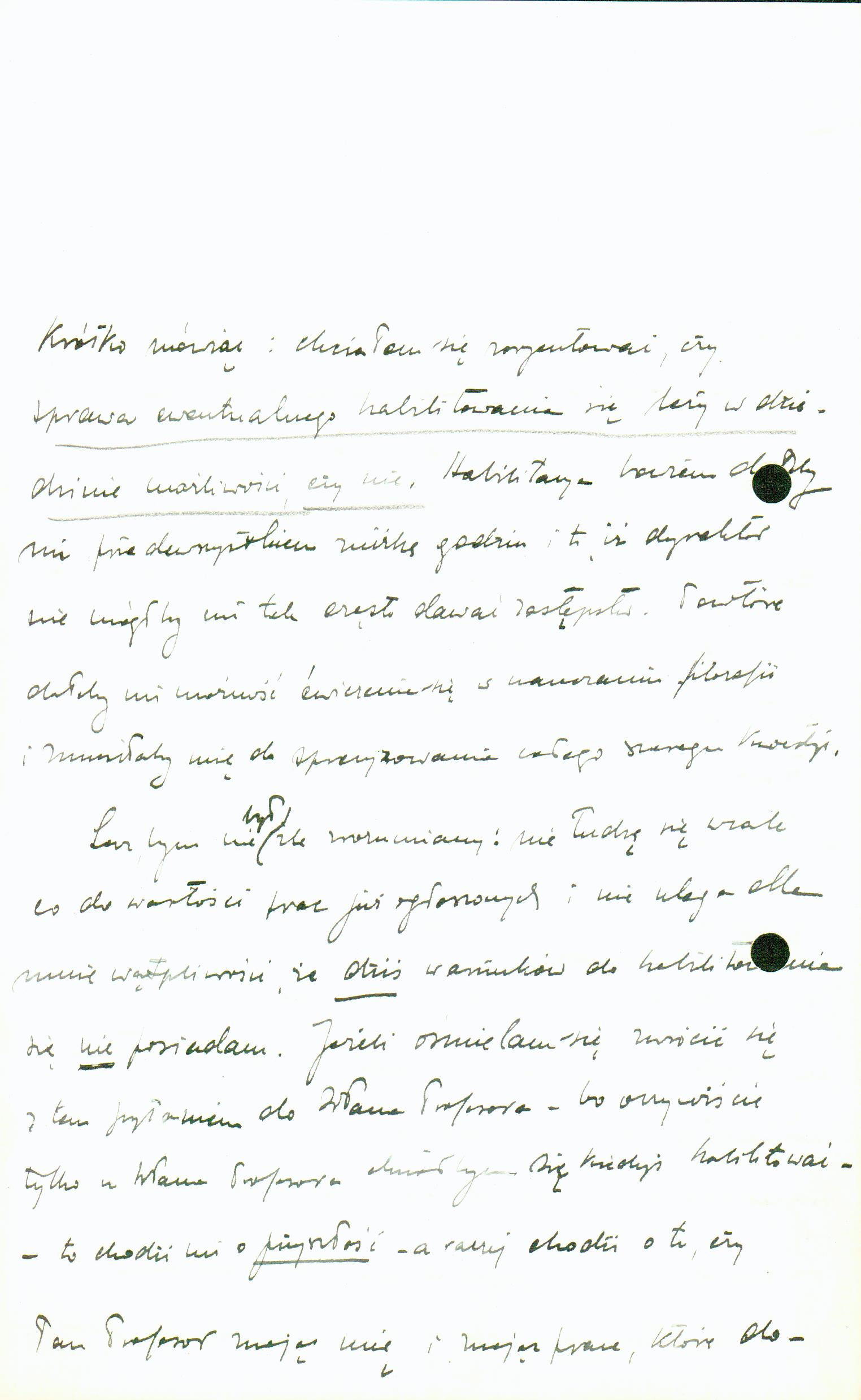 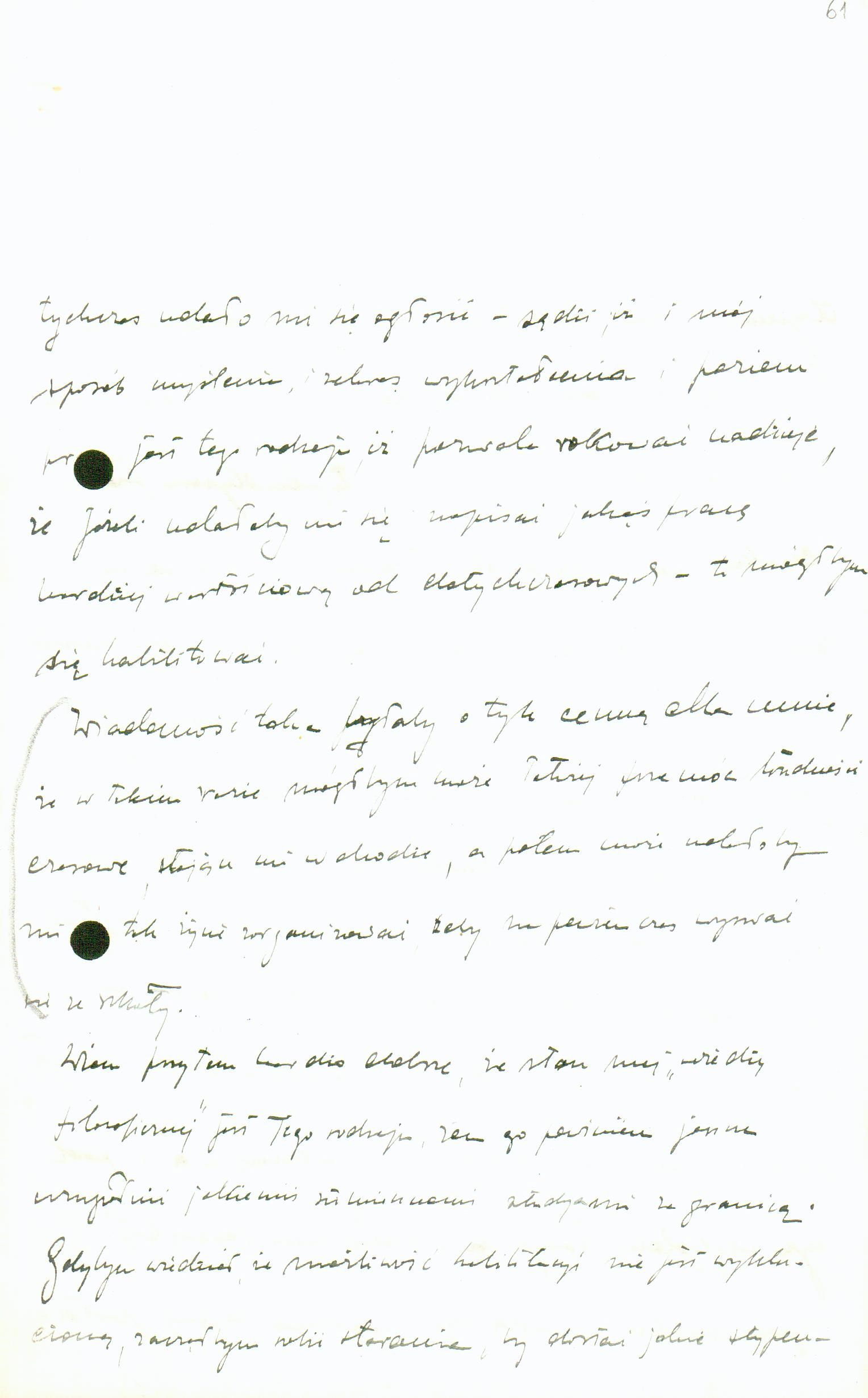 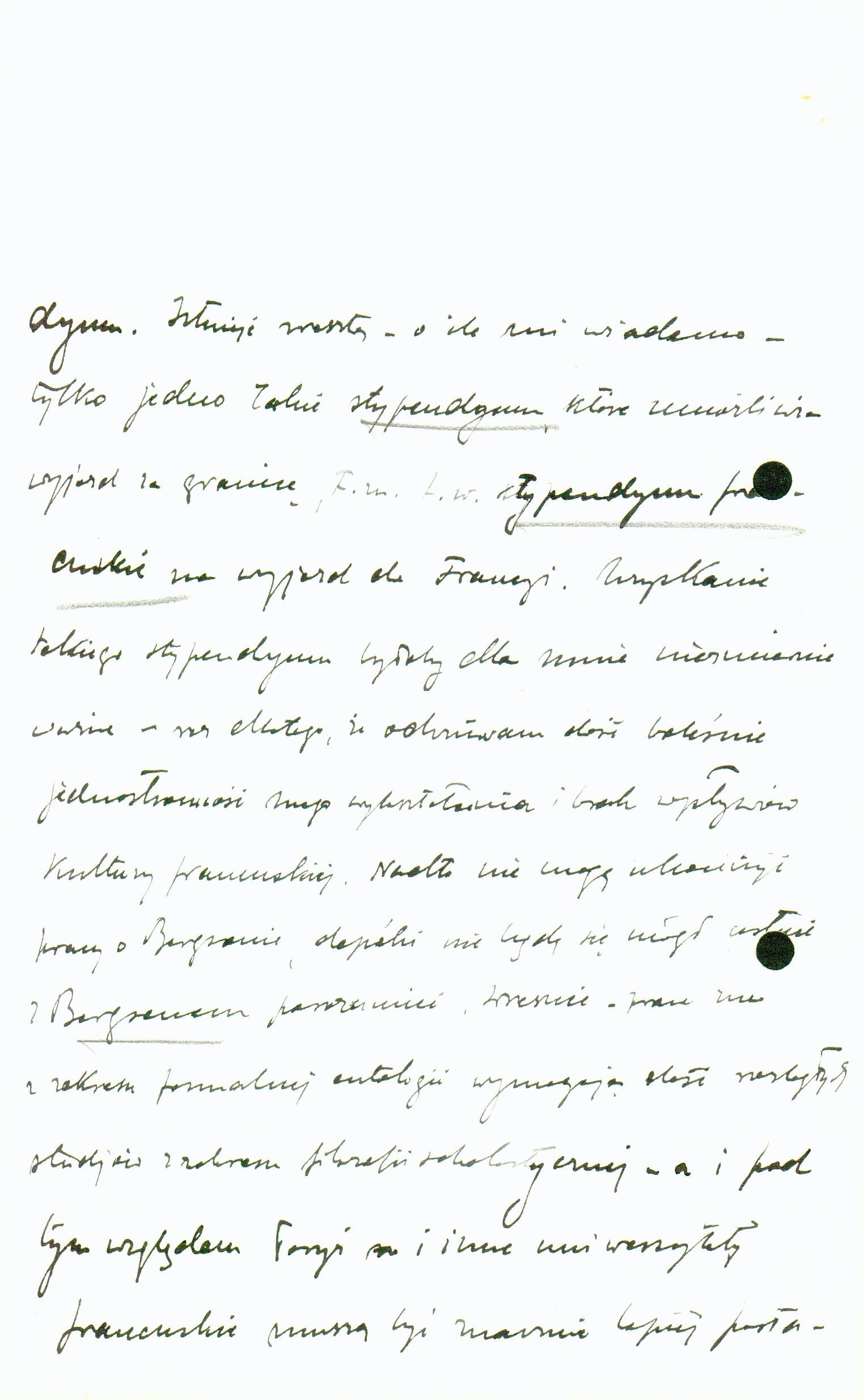 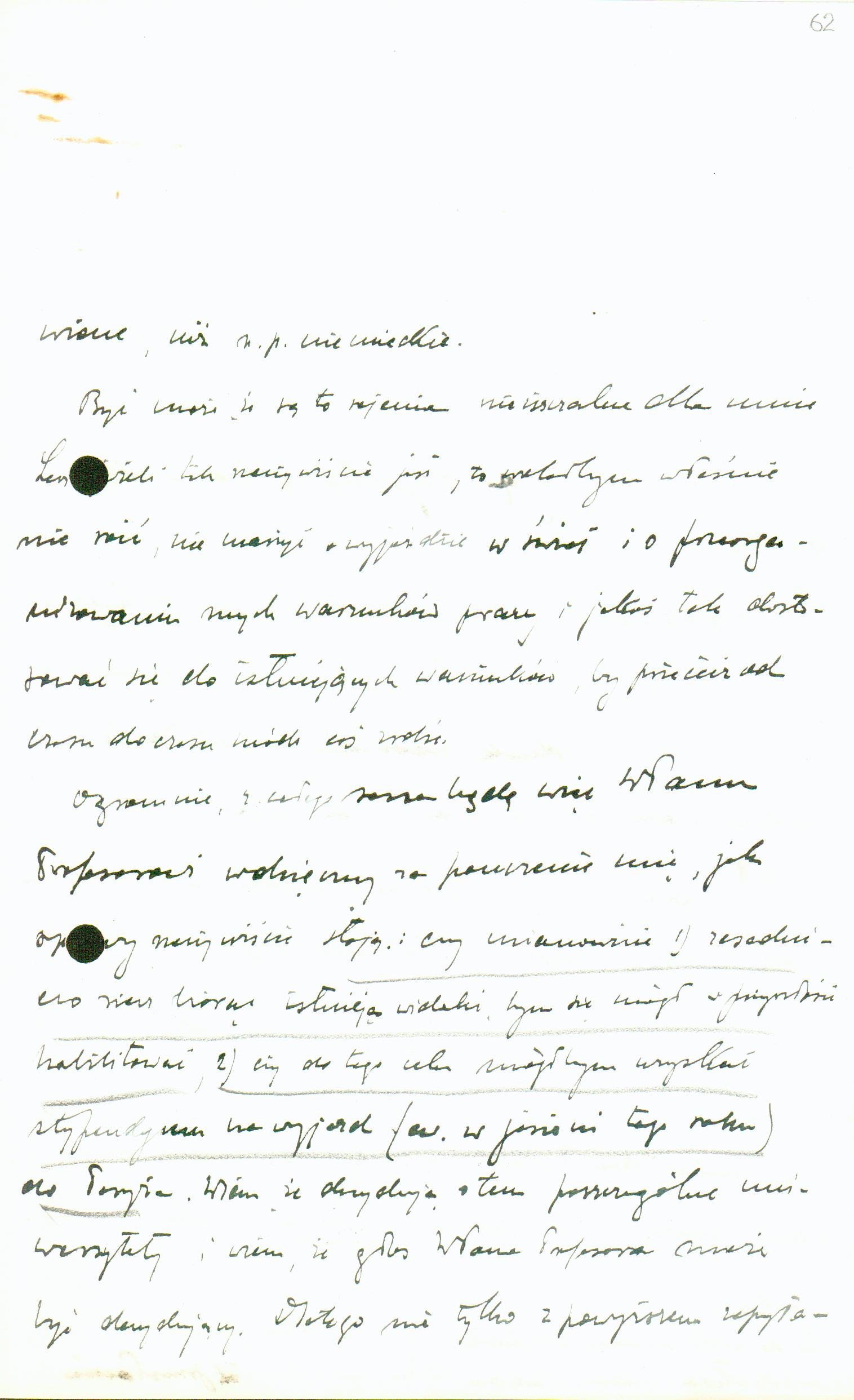 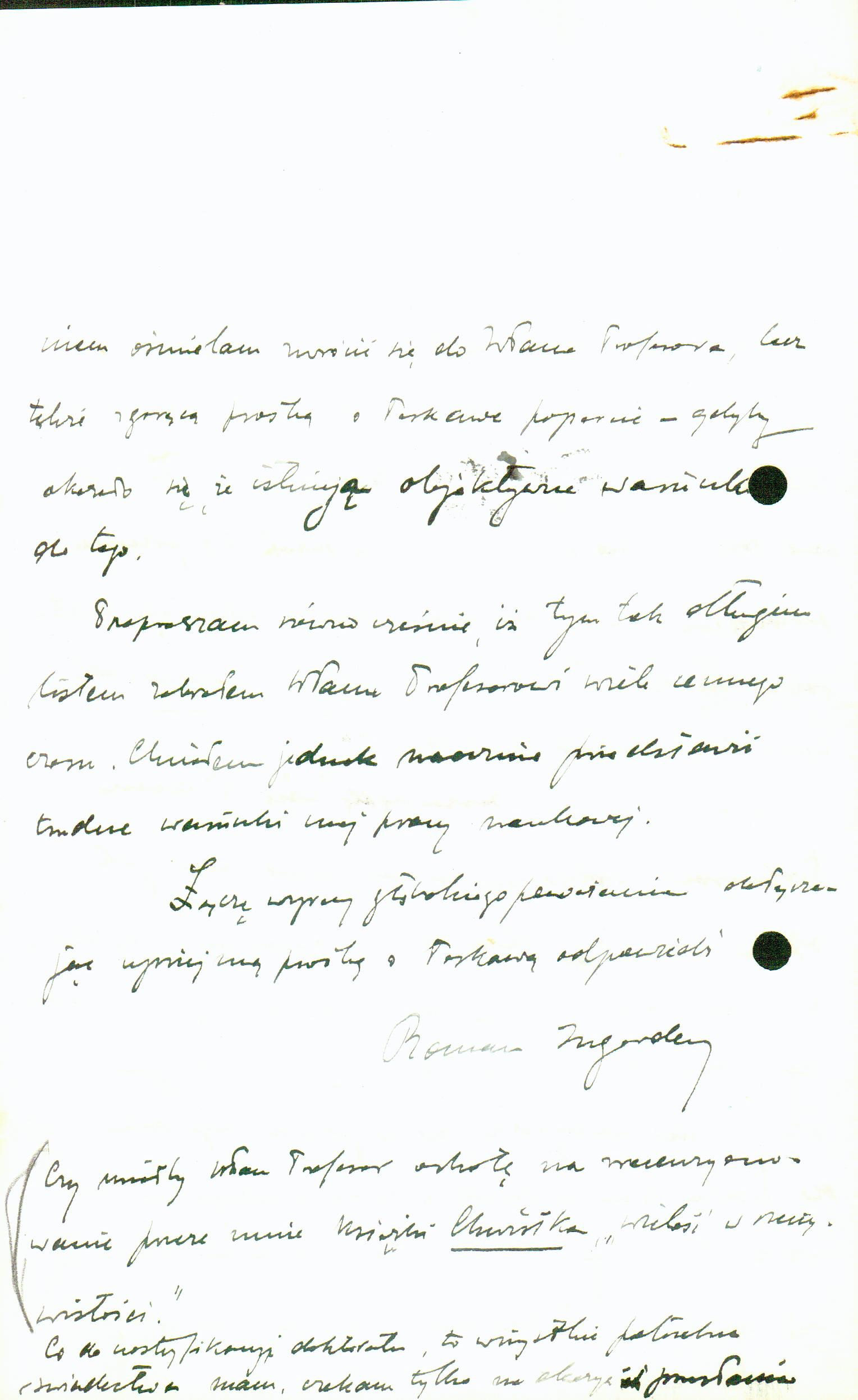 For a very long time I’ve wanted to write to you about various matters, but due to an overload of school work I suffer from a chronic lack of time. I would have written earlier in any case, if not for the fact that I’d promised myself to send a review of some kind for [Philosophical] Movement along with the letter. As a reporter on phenomenological publications, I have a huge backlog. If we take only this past autumn into account, in addition to the large Volume V of Yearbook, the following came out: 1) Adolf Reinach[O1] ’s Gesammelte Schriften [German: Collected Writings]; 2) Hedwig Conrad-Martius’s[O2]  Metaphysische Gespräche [German: Metaphysical Dialogues]; 3) Moritz Geiger[O3] ’s Philosophische Bedeutung des Relativitätstheorie [German: Philosophical significance of the theory of relativity] and Max Scheler[O4] ’s big bible entitled Vom Ewigen im Menschen [German: On the Eternal in Man].

To begin with, to reduce this litany, I’m sending a brief review of Reinach’s Gesammelte Schriften. If, in your judgment, readers will be interested in this book, and my report is feasible and not too long, I’ll willingly make it available.

As for the reports on Volumes IV and V of [Phenomenological] Yearbook, which you once asked me for, I see that I’ll have to write them myself. Mr Rosenblum, whom I mentioned in my previous letter, told me over the holidays, when I was in Warsaw for a few days, that they would take a long time yet, so that maybe it’d be better for me to write them. So if you have no other candidate, I’m ready to write brief reports. I’d just ask for a little patience, because during the school year the thing’s nearly impossible for me. However, I think that during the Easter holidays I’ll be able to do it.

Precisely due to this lack of time and the inability to work systematically, I wanted to send you a number of questions and requests. I’d be enormously grateful if you’d be so good as to interest yourself in this matter and graciously give me a response.

Well, the matter of my time presents itself as follows: in the middle school, I have 30 full hours of mathematics and logic lectures, and, additionally, work as a class advisor and two hours a week of private lessons. In Warsaw, I had a maximum of 20‒22 lecture hours; here, however, I can’t limit myself to that number, for two reasons: first, because I’m really the only ‘mathematician’ at the school who’s completed university, so I’ve had to take over all of the higher classes, and second, because it’s different in terms of today’s high cost of living, which in Toruń is no less than in Warsaw – I simply wouldn’t be able to survive. Especially since, as I need to inform you, since 19 October I’ve had another son, so the costs have grown and my wife has been unable to practise as a physician for a number of months. Besides, being a complete stranger here, she can’t count on being able to practise.

However, the mere fact of 32 hours of school work wouldn’t be a problem in and of itself (after all, I had 32 hours of lessons in Lublin). The point is that school work under the conditions prevailing here is extremely burdensome. I found mathematics here in a completely desperate state, because there hasn’t been a good maths teacher here since the schools became Polish. As a result, this class is, on the whole, two years behind in terms of material. But that’s just a trifle. Much worse is that young people are badly undeveloped mentally, completely unused to thinking (the Prussians taught them here chiefly by rote) and exceptionally dull by nature – and, finally, quite lazy. It all adds up to the fact that this reworking of new material, along with so-called ‘questions’, demands a lot of effort and patience from the teacher. After five hours of this work, one emerges completely wiped out mentally. ‒ Every sentence that is extracted from a student, or that a student grasps, costs a great, great deal of effort. My school work in Warsaw was a pleasant stroll in the park compared to this. Here, the pleasure of teaching is lost due to the lack of any echo in the classroom and to the scanty results of work. A few years of this kind of work, if it doesn’t kill a teacher, must at least dull his mental capacity. For now, I feel, despite the greatest efforts on my part, unable to start working for myself any earlier than six o’clock in the evening. Prior to that, I’m incapable of thinking. If I subtract the time needed to correct assignments and plan lessons for the following day – which, given the mental level of the students, is particularly important here – very little time is left for original work. And despite the fact that I currently have a beautiful and quiet office in which to work, the pace of my work has slowed significantly. The worst is that if one is unable to dwell on a certain issue for 5‒6 hours a day, it’s impossible to get into problems; one ceases to see things; work becomes haphazard and superficial. All of this leads to a spiritual dilemma, constant dissatisfaction with oneself about unfulfilled spiritual needs, and so on.

I have two longer papers in the works (– both from the area of formal ontology – one on ‘the subject and its attributes’, the other on ‘the identity of the subject’); the second part of the Bergson paper is weighing on my mind; after all, it should be written and published; the continuation of the paper on ‘petitio principii in the theory of cognition’ is sitting in a drawer ‒ the Windelband translation, already begun, is also sitting there (I’ve translated 100 pages of text so far ‒ but I’ve stopped, since at the moment the prospects of publishing are slight, while the work is enormous. The Warsaw Institute is supposed to let me know about it.) ‒ and none of this is progressing as it should in order for each of these papers to be consistent. At present, I’ve written a brief article about Scheler for the Warsaw Review, maintaining a popular tone ‒ as I was asked to do ‒ and yet it took me over two months of time.

Taking all of this together leads me to the conclusion that a decision is necessary as to which mistress to serve exclusively ‒ philosophy or school. Well, at the moment, since I’m incapable of deciding, with a light heart, on the necessity of complete devotion to school, with pleasant excursions into the realm of philosophy, I still want to see whether it might not be possible the other way around: to chiefly serve philosophy.

In short: I wanted to form an idea as to whether the matter of potential habilitation lay in the realm of possibility or not. Habilitation, in fact, would enable me above all to cut my hours; also, the director wouldn’t be able to give me substitutions so often. Second, it would give me the opportunity to practise teaching philosophy and would force me to clarify a whole range of issues.

However, so as not to be misunderstood: I’m not deluding myself at all as to the value of the papers I’ve already published, and I have no doubt that as of today I don’t possess the qualifications for habilitation. If I take the liberty of turning to you on this question ‒ because it’s obviously only with you that I’d like to become habilitated at some point – this is a question for the future ‒ rather, the point is whether you, knowing me and having the papers that I’ve succeeded in publishing to date ‒ believe that my method of thinking, the scope of my education, and the level of my papers are such as to enable me to hope that, if I succeeded in writing a paper more valuable than its predecessors, I could become habilitated.

This kind of information would be valuable for me to the point that, in that case, I might be able to more easily overcome the time difficulties standing in my way, and then perhaps I could manage to organise my life so that I could get out of school for a certain period of time.

At the same time, I know very well that the state of my ‘philosophical knowledge’ is such that I ought to supplement it with some kind of conscientious studies abroad. If I knew that the possibility of habilitation wasn’t out of the question, I would begin attempts to obtain some kind of scholarship. Actually there is, as far as I know, only one such scholarship, which makes it possible to travel abroad, i.e. the so-called French scholarship for a trip to France. Obtaining such a scholarship would be extremely important to me ‒ first, because I’m painfully aware of the one-sidedness of my education and the lack of influence of French culture. In addition, I can’t finish my paper on Bergson until I can communicate verbally with him. Finally ‒ my work in the field of formal ontology requires quite extensive studies in the field of scholastic philosophy ‒ and in this respect Paris and other French universities must be much better positioned than, for example, their German counterparts.

Perhaps these are unrealisable dreams for me. But if that’s really how it is, I’d prefer not to dream about going out into the world and about reorganising my working conditions, but somehow adapt to the existing conditions, so that at least I can do something, if only from time to time.

I would be enormously grateful to you with my whole heart for advising me as to how the matter really stands: namely, whether 1) generally speaking, there are prospects of my becoming habilitated in the future, or whether 2) I could, towards this end, obtain a scholarship for this trip (possibly in autumn of this year) to Paris. I know that this will be decided by particular universities and I know that your voice may be decisive. Therefore I take the liberty of turning to you, not regarding this question alone, but also with a fervent request for your gracious support ‒ if it were to turn out that objective conditions existed for this purpose.

At the same time, I apologise for taking such a great deal of your valuable time with such a long letter. However, I wanted to clearly present the difficult conditions for my original work.

I enclose expressions of profound esteem, along with a courteous request for your gracious reply

Would you be interested in my review of Chwistek[O5] ’s book Wielość rzeczywistości [The Plurality of Realities]?

As for the nostrification of the doctorate, I have all the necessary certifications; I’m just waiting for the opportunity to send them.